How a pair of cinematographers live in 470 square feet

How a pair of cinematographers live in 470 square feet 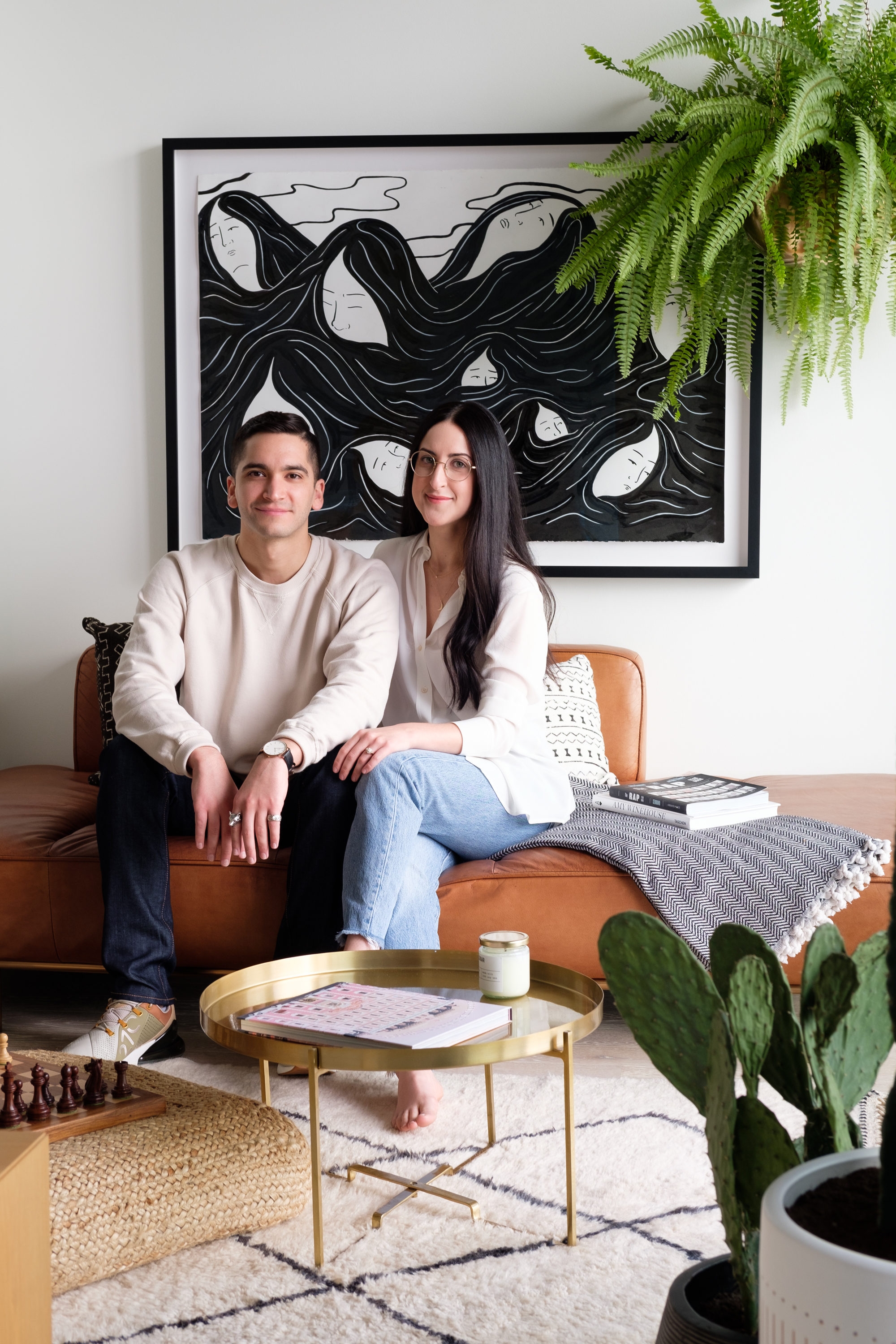 Ricardo and Victoria, or “Vic and Ric,” as they’re known professionally, started dating in high school. They both went on to study multimedia at McMaster and started their wedding videography company, Outside In Studio, as part of their final thesis project. Shortly after they graduated in 2012, they put a deposit on a pre-construction condo at Dundas and Sorauren, and crashed with their families in Burlington and Oakville until it was finished. They loved that the building had some design cred (the interiors were done by award-winning local designer Johnson Chou), and that the 11-foot ceilings made the space seem larger than it was—a key consideration, since the two of them run their business from home and would be spending a lot of time there.

Before finally moving in at the end of 2016, they painted the space a warmer hue of white and replaced the kitchen backsplash. They sourced chic, minimal furnishings from CB2 and invested in a high-quality sound system, rather than a top-of-the-line TV. They even managed to squeeze in a super-thin desk near the front door. Because they spend every day working together in the space, they’re careful to avoid clutter, and they make sure to keep rogue power cables and other cords out of sight. During the day, they split their time between the desk, the couch and the countertop. They say the space works so well for them that they rarely feel the need to escape to a coffee shop.

They found the desk at CB2. The power bar at the lower right is an example of their relentless cord concealment: 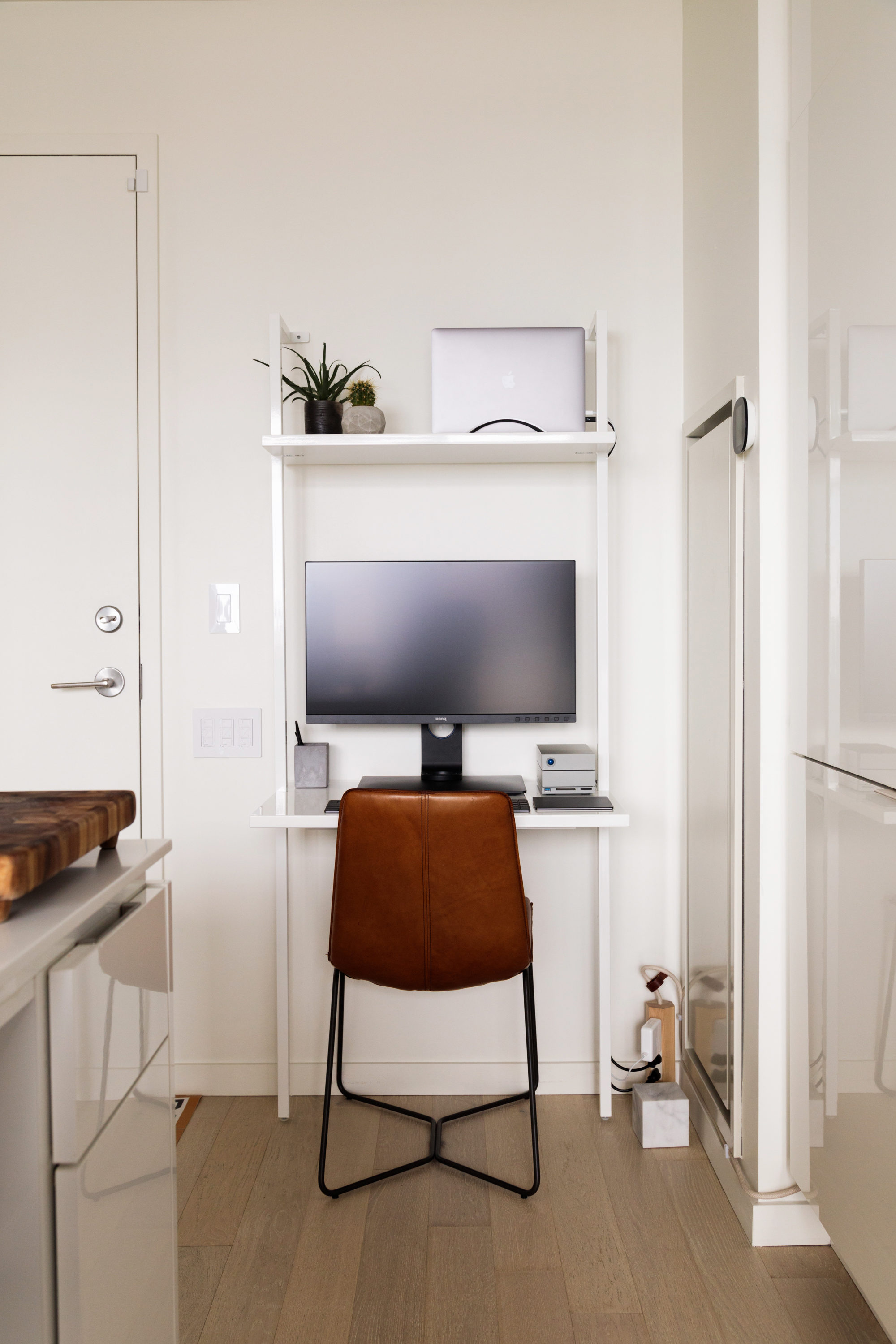 They left one wall pretty blank, with just a record player and speakers, rather than a TV. “I didn’t want people to walk into our space and have the TV be the focal point,” Victoria says. “I wanted there to be conversation and games.” They find that the negative space on the wall makes the unit seem larger: 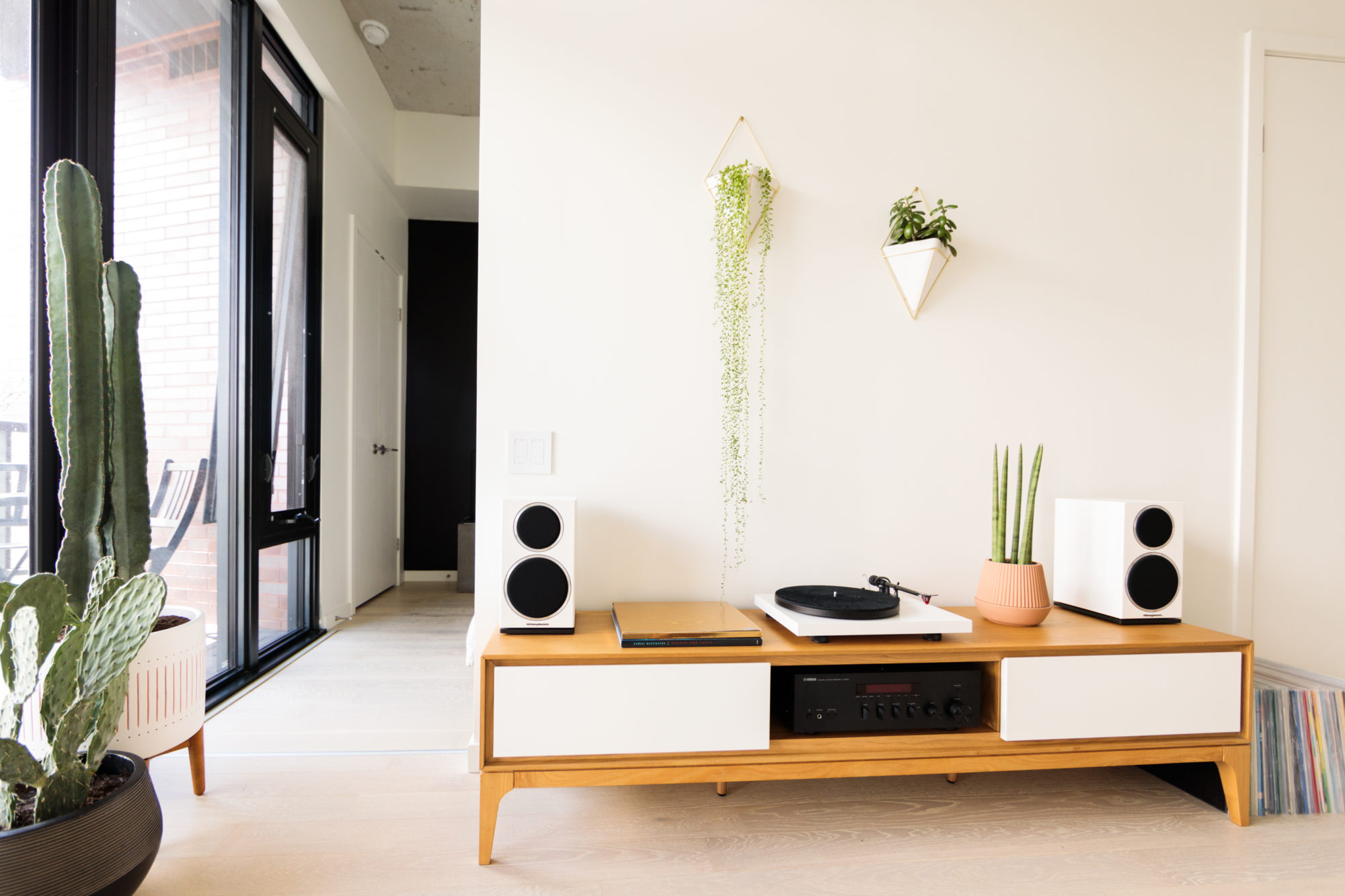 The piece above the sofa is by local artist Ness Lee. They opted for a CB2 sofa without armrests. It can fit up to four people: 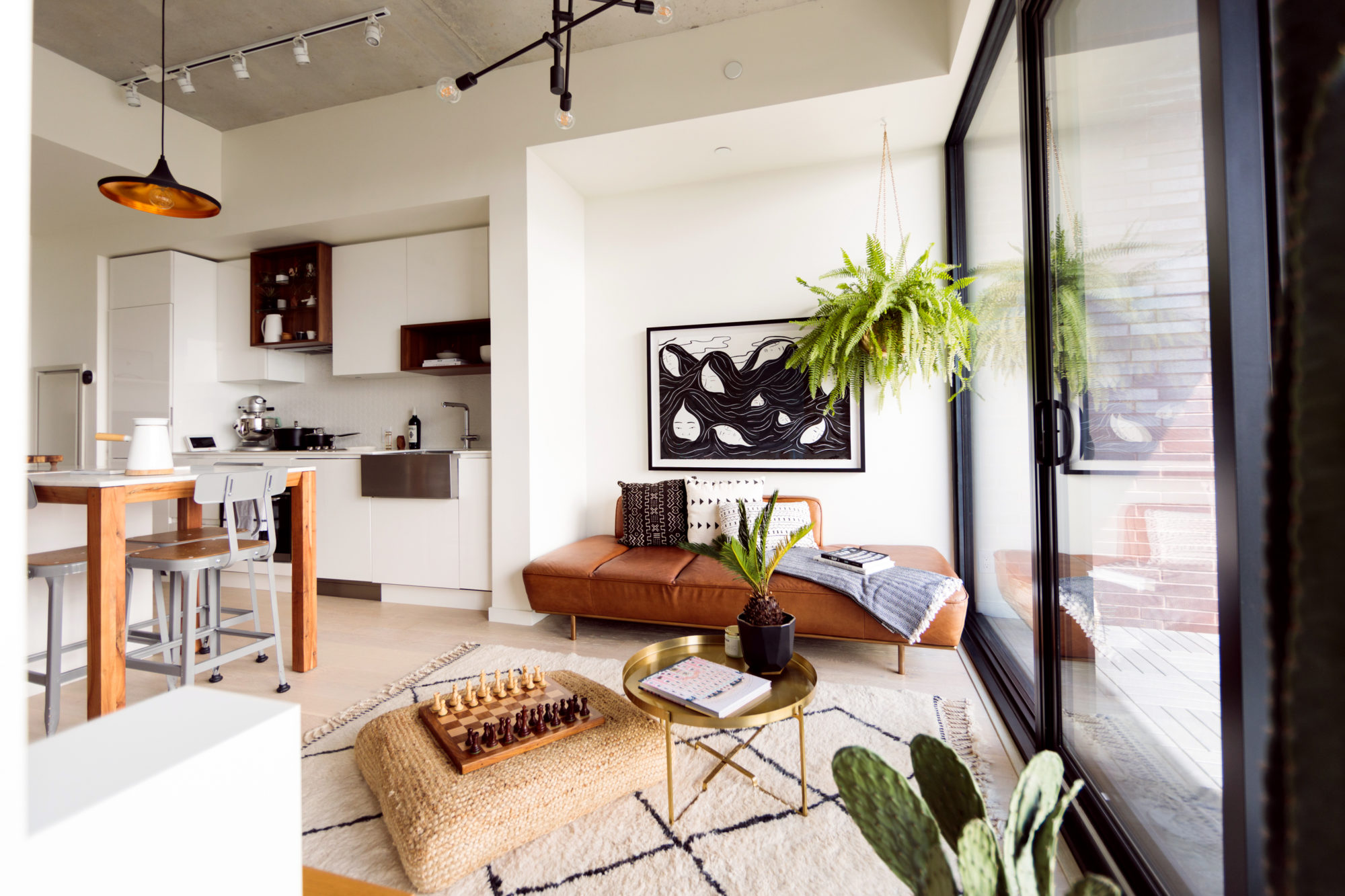 They painted one wall in their bedroom charcoal grey and installed a TV on the opposite wall: 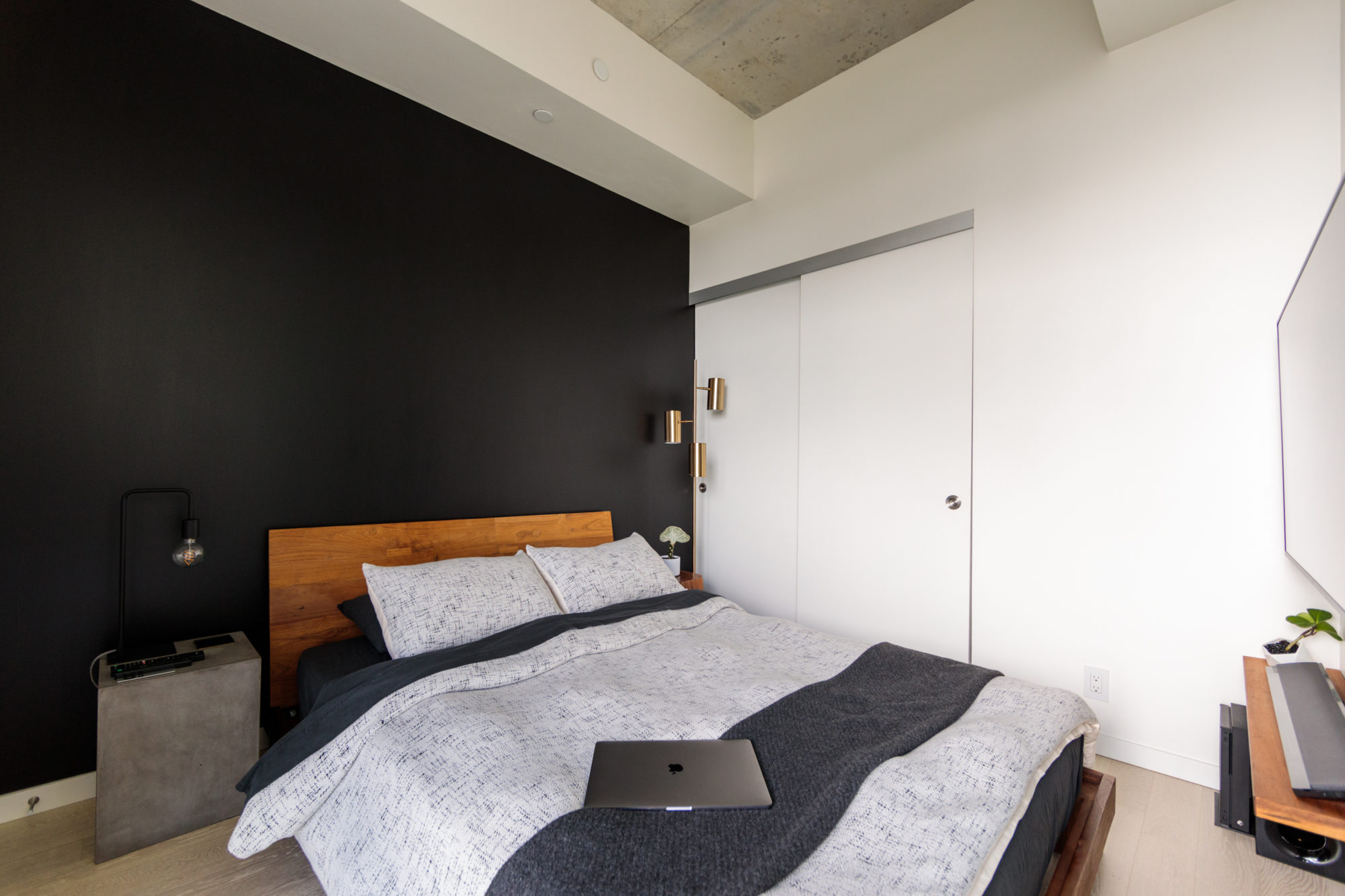 They installed a new backsplash, but kept the existing minimalist cabinetry: 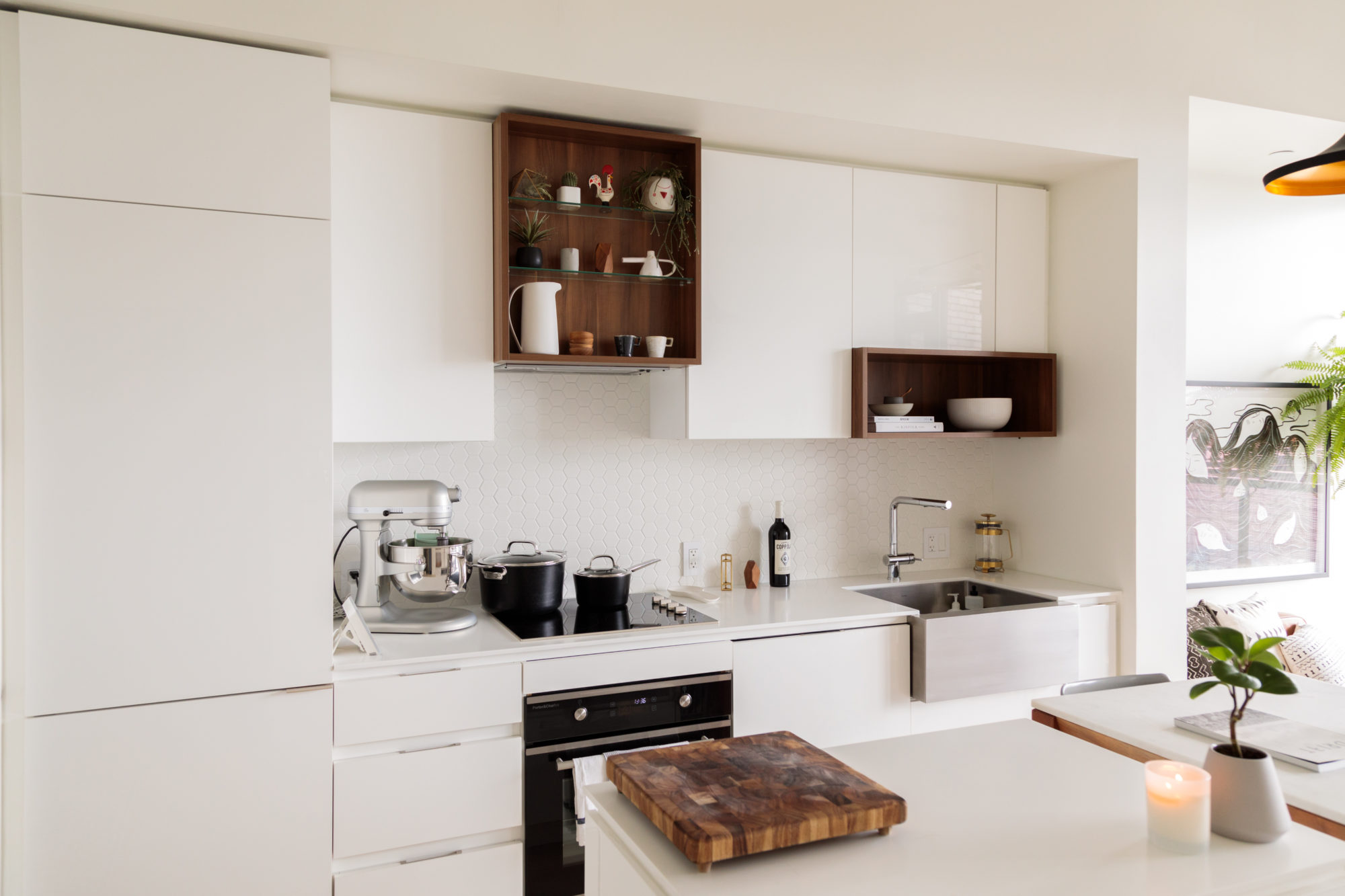 Did you make interesting compromises to find a home in the city? We want to talk to you.