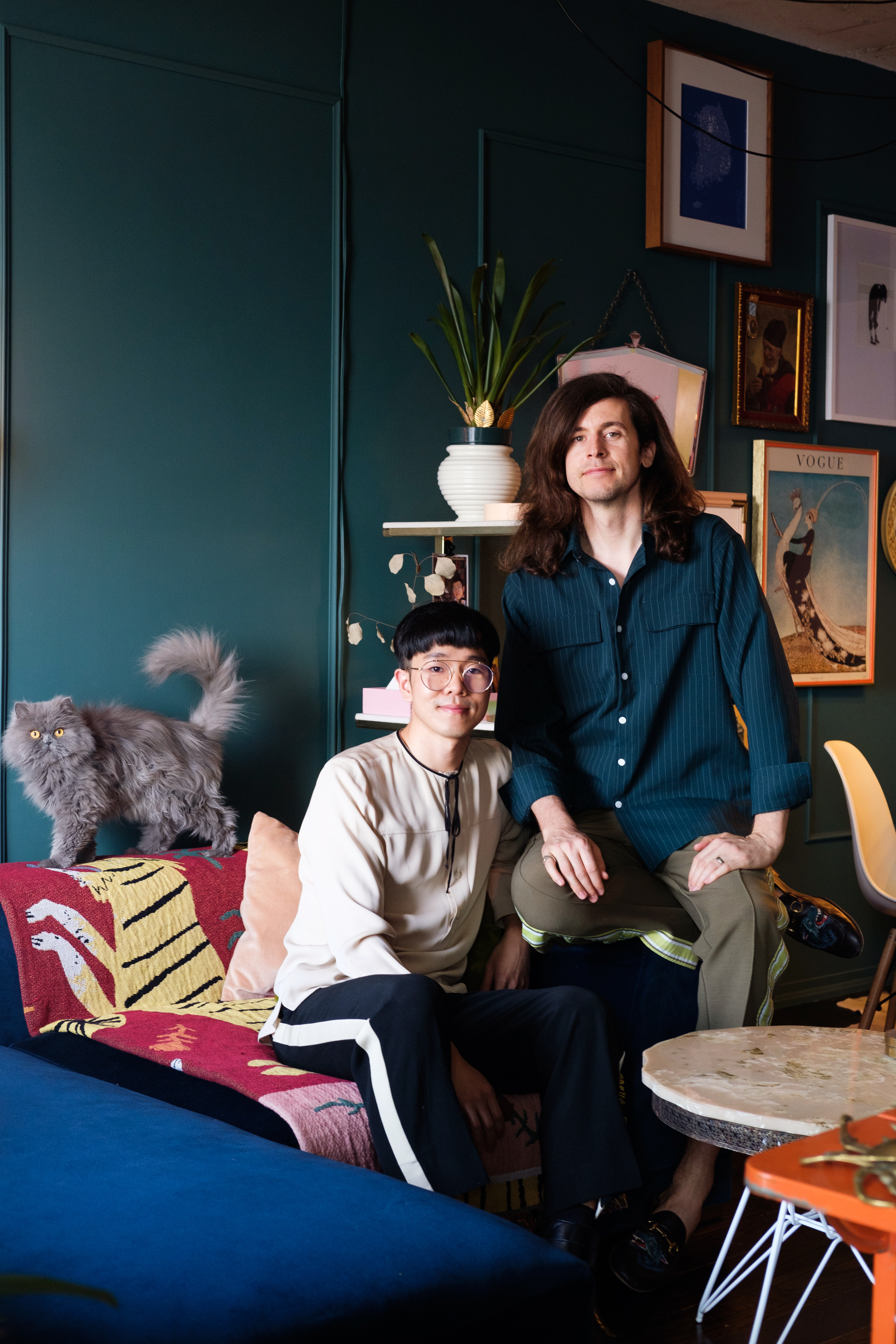 At some point last year, Chad Burton and Burger Kim realized that the monthly rent on their Queen West apartment was costing them about as much as they would have been paying if they had a mortgage on a condo. They bought a place in the same building, just six floors up, and in a west-facing unit instead of an east-facing one. Their previous unit was larger, but both say their new 16th-floor pad feels more like home. “The previous unit had a den space between the entrance and living space,” Chad says. “With this unit, when you walk in, you’re here.”

Moving from a smallish space to a smaller one proved an easy adjustment, especially with the new unit’s unique perks: the bedroom has an entire wall of windows, and the kitchen cupboards are an attractive lacquered red. “I love a good coloured wall, and I’m not scared of colours mashing together” Chad says. “We used that as a starting point, and we went loud.” Their intense knick knack collection enhances the effect.

“I love sitting on the corner of the couch while Chad is in bed reading,” Burger says. “That’s the spot where I can see both our cat Terrence nested in his throne and Chad being intellectual under moody lighting, and that makes me happy.”

After they moved in, Chad and Burger painted the apartment and installed new moulding: 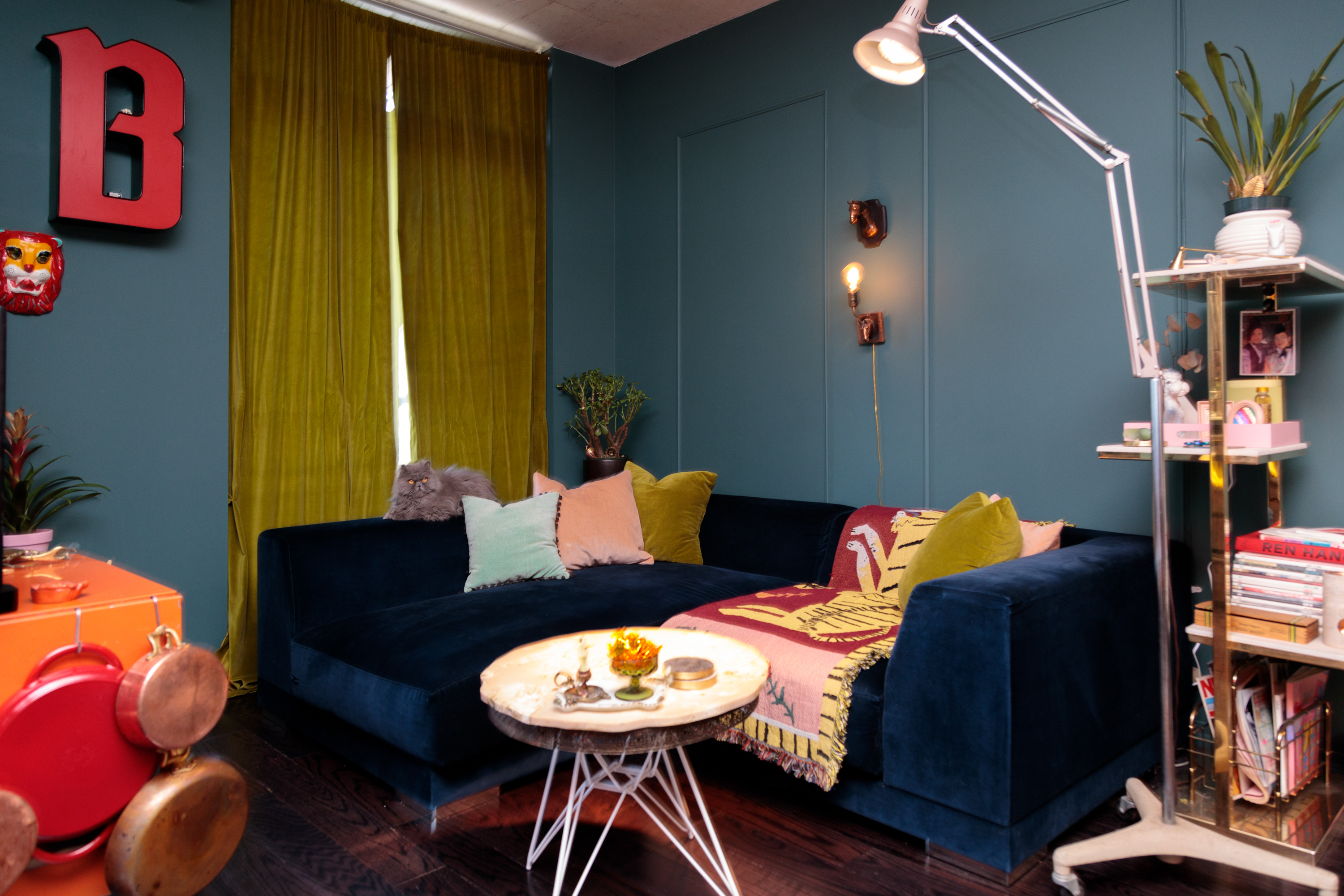 The striking kitchen cabinets distract from the empty space above them, which they use for storage: 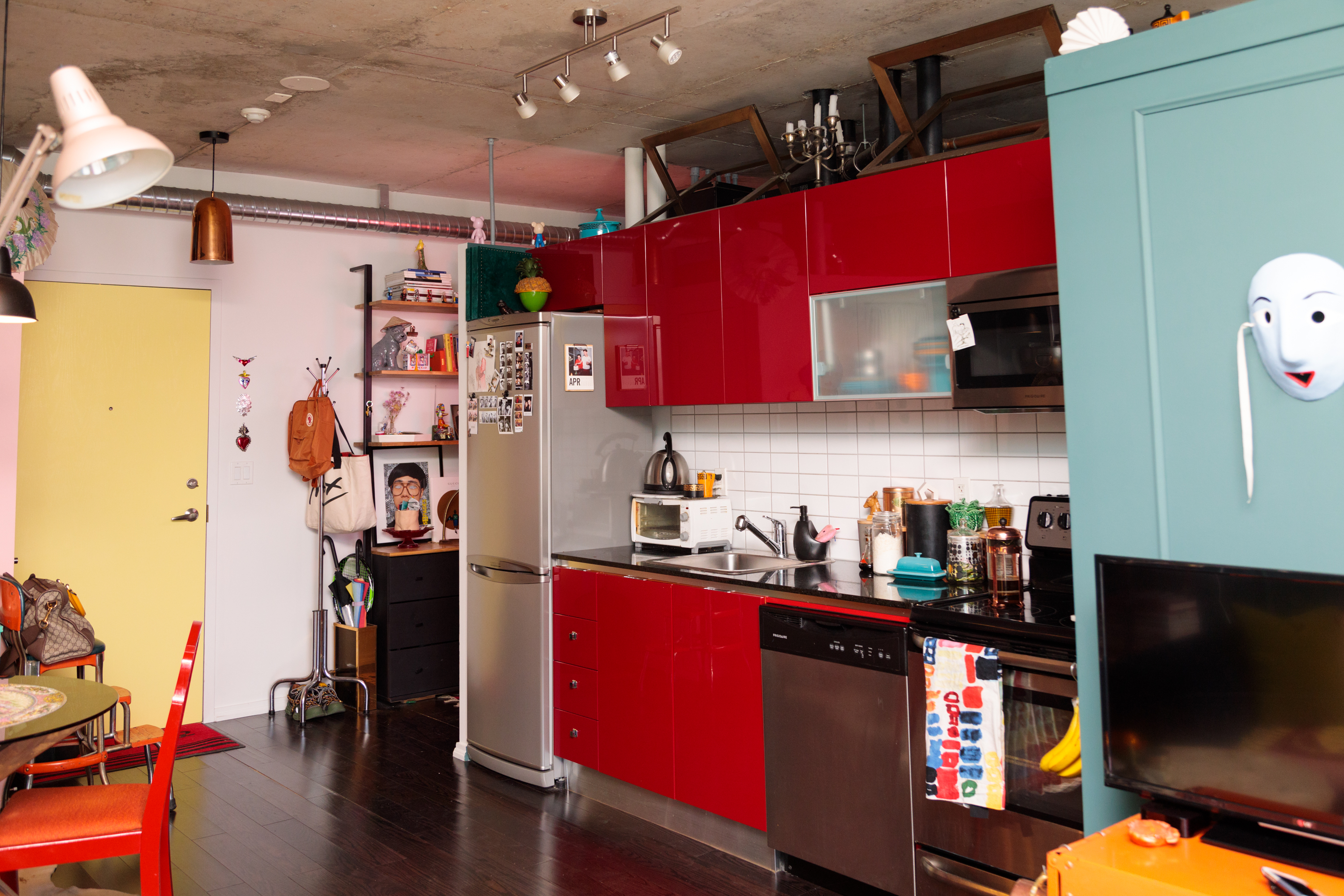 The bathroom is located between the den and the bedroom. They blocked off one of the two doors in order to reclaim some wall space: 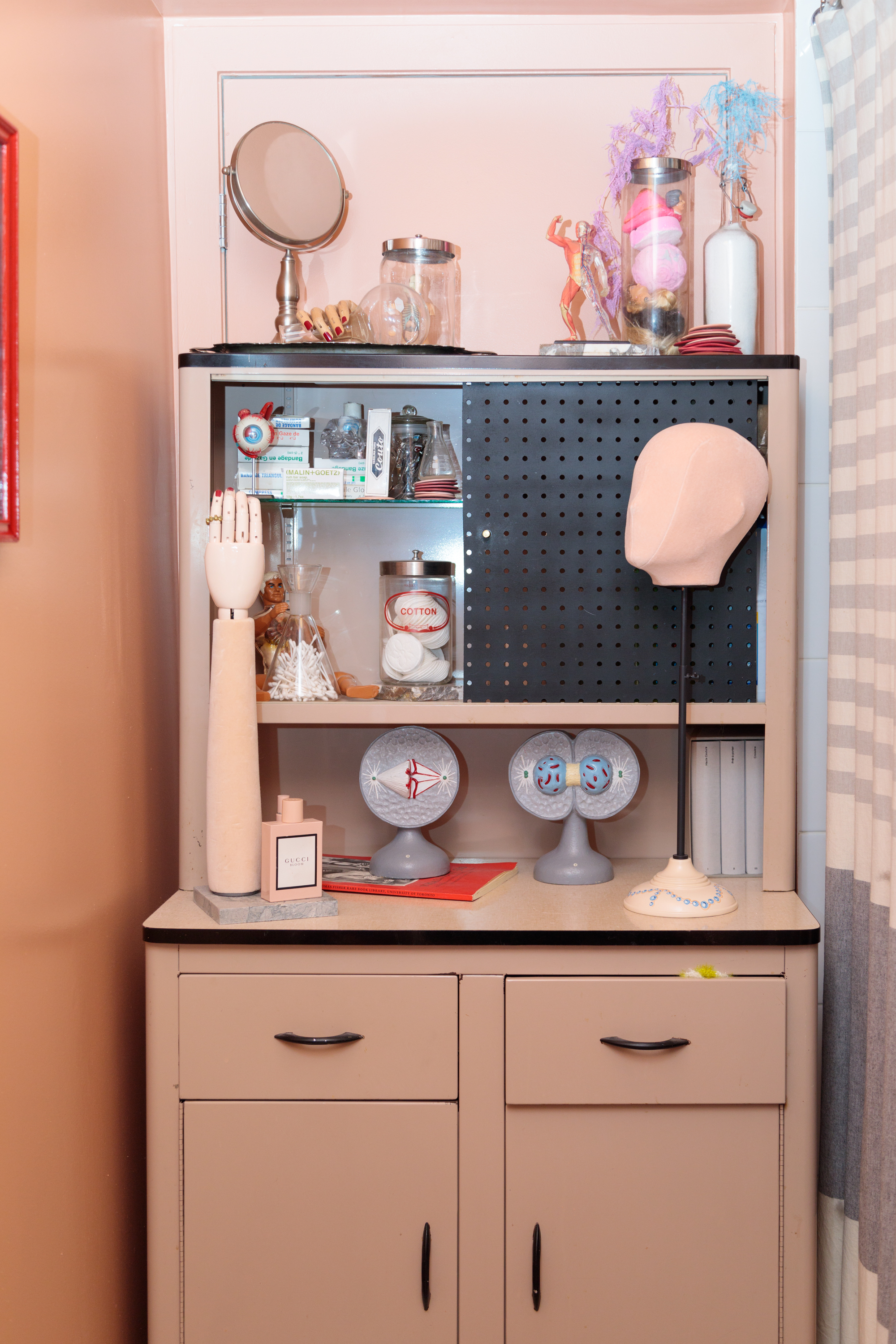 “I don’t know if there’s one word to describe our style, but it’s a maximal vibe, with layers of stuff, cheesy porcelain knick-knacks, pops of colour, that kinda thing,” Chad says: 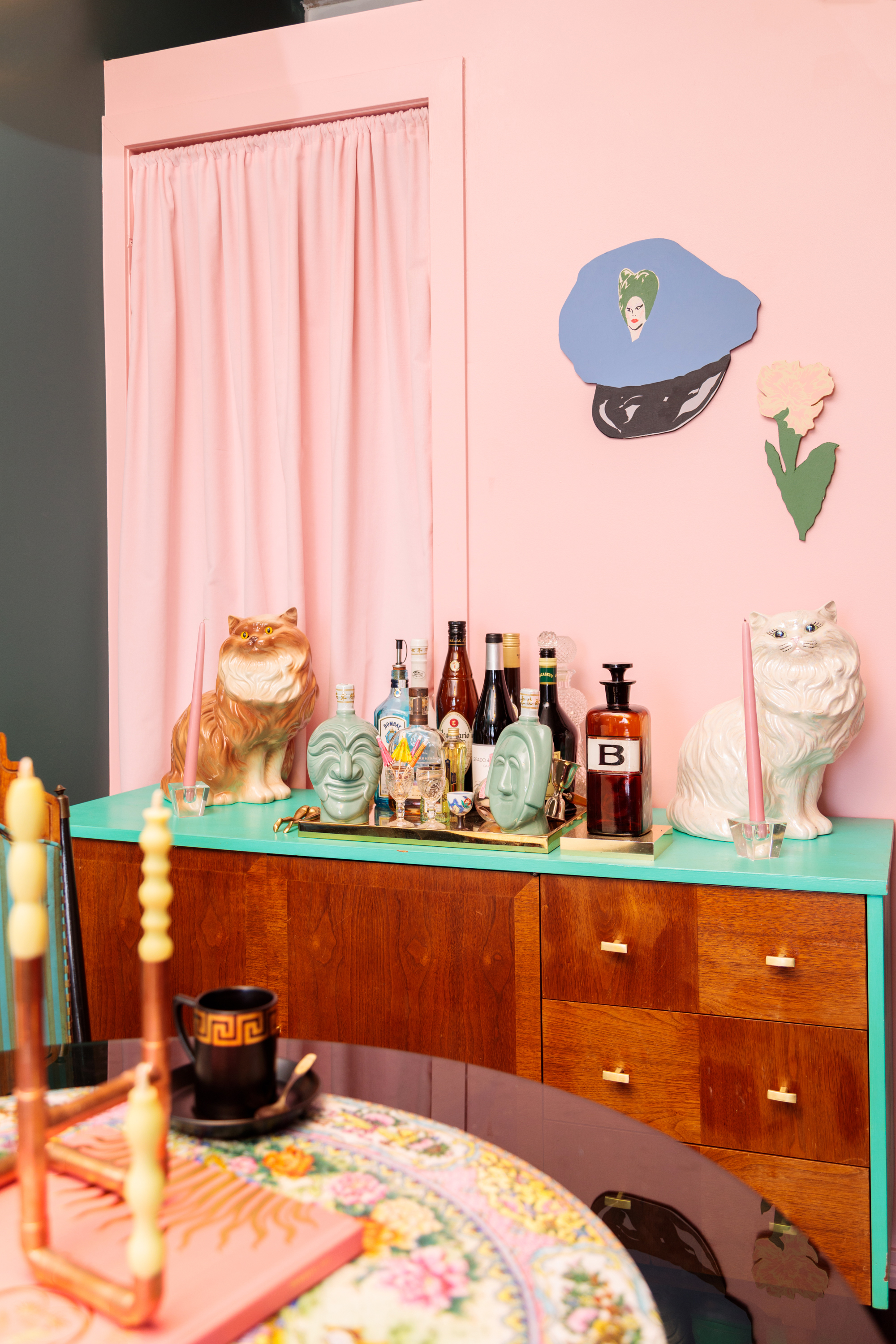 The bedroom is well lit and inviting, and it has plenty of whimsical touches. “We had a round crystal that just sat on our shelf serving no purpose,” Burger says. “Since we moved here, we have so much daylight coming in that we hung it by the bedroom window, and when the sunlight passes through it shoots out little rainbow dots all over the room. It’s a cute surprise.” 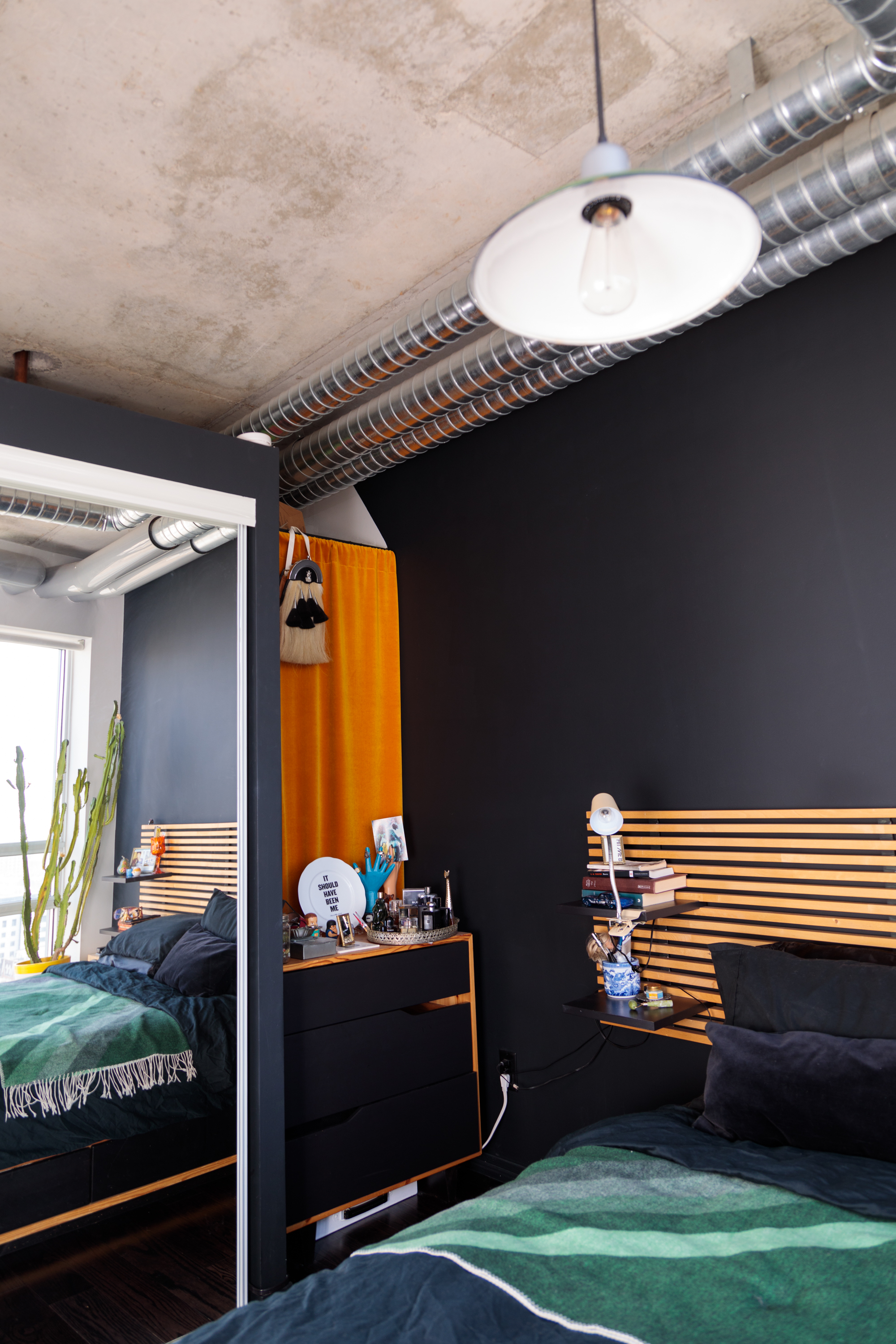 The pair repurposed a wide hallway into a partial den, which now functions as their home office space: 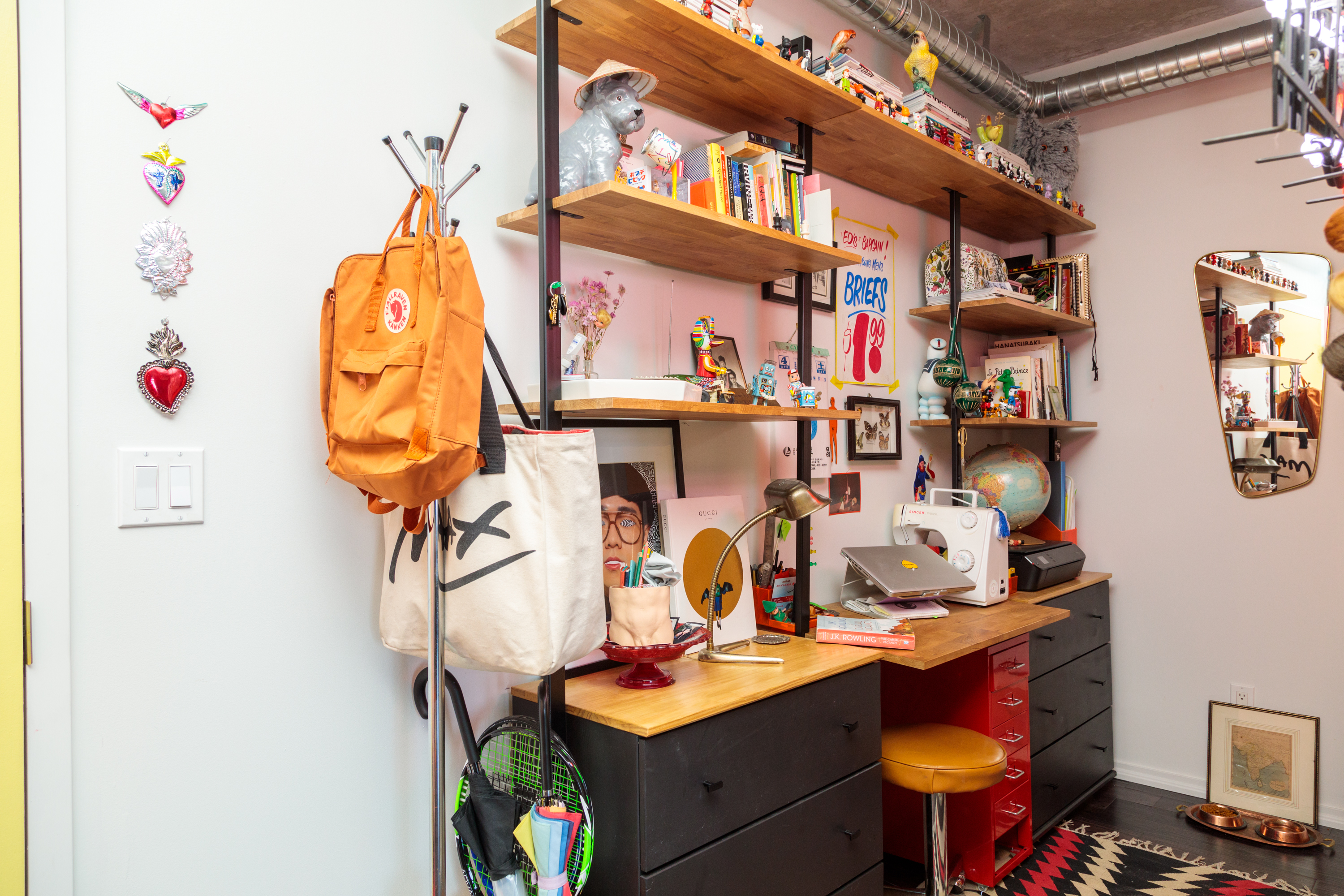