A 1,200-square-foot cottage near Haliburton. The two-bed, one-bath bungalow has a recently renovated interior and 100 feet of fishable riverfront. 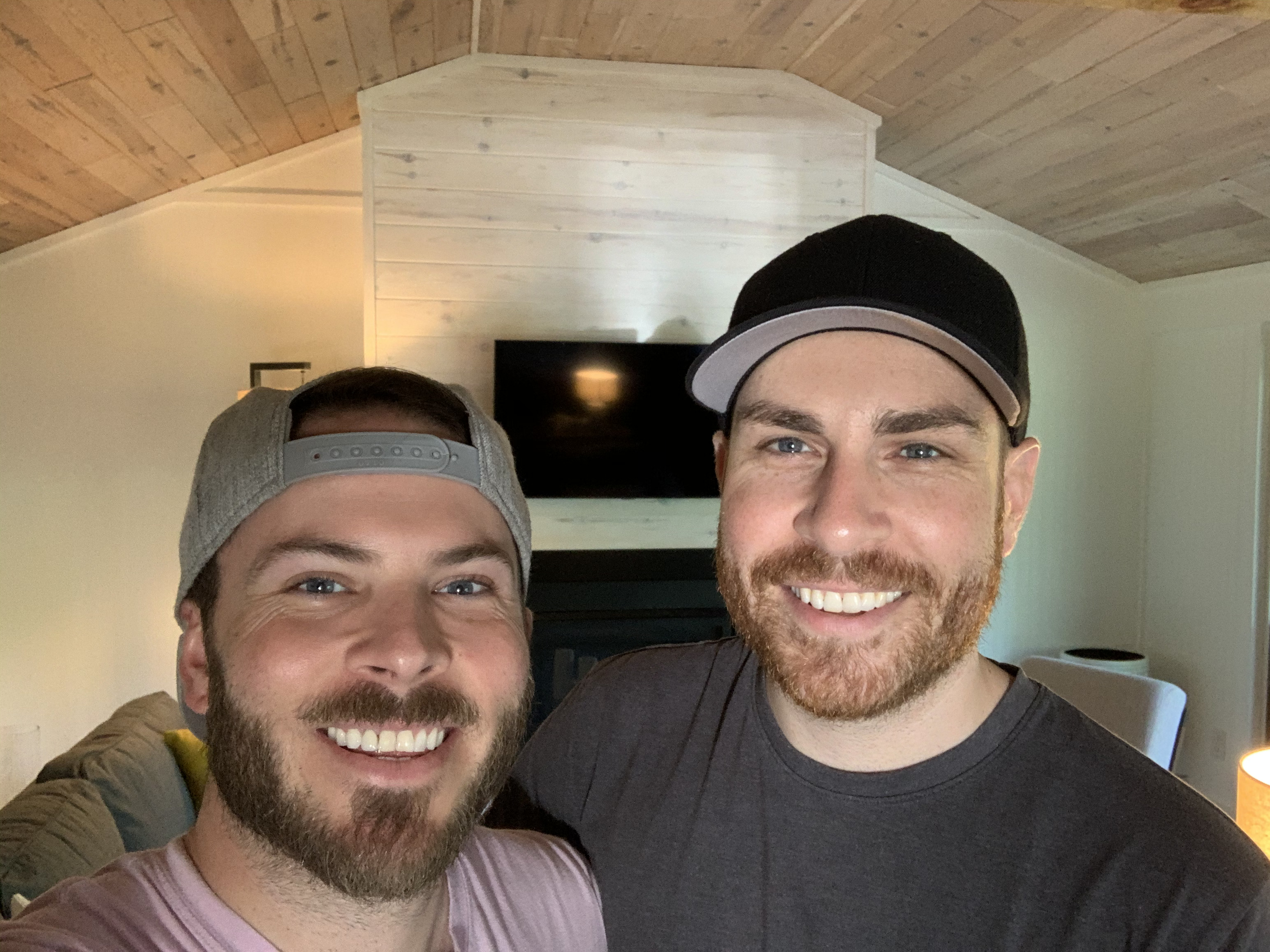 In 2014, an outdoorsman who builds log homes and runs adventure tours in Northern Ontario bought the property for $86,000. The place was rundown, old-fashioned and in need of an upgrade. So he added a new septic system, installed a fireplace for winter and overhauled the interior. The seller’s sister, a Muskoka-based interior designer, suggested he put in pine ceilings and white beadboard walls to give the space a beachy, Cape Cod vibe. In the fall of 2019, he hired an agent and listed the cottage for $399,000, but they were unable to drum up any offers. They took it off the market in January 2020, then built a stone walkway and a new dock once the snow melted, hoping to make it more appealing for buyers.

In early 2020, Matt and Caylen, who own a condo in Regent Park, were preparing for their summer wedding in cottage country. They had a 100-person celebration slated for mid-July, at the Northridge Inn in Sundridge. After two years of saving, they had banked $38,000 to pay for the weekend festivities, which included a welcome bonfire and a brunch for guests. They had already spent $3,000 on save-the-date cards and wedding invitations, with plans to start shopping for suits and rings, when Covid-19 swept across the province.

On March 16, the province prohibited gatherings of more than 50. At the time, Matt and Caylen thought a mid-July wedding for 100 people might still be possible. But as the lockdown tightened, it became clear their wedding would be compromised. Before they officially cancelled the nuptials, Matt suggested they re-invest the money earmarked for the wedding into a cottage. They had discussed getting a cottage to escape the city on weekends as part of their five-year post-wedding plan, and the uncertainty surrounding their wedding gave them a chance to expedite the timeline. But the pandemic had unsteadied the real estate market. They weren’t sure if the market would crash, or if their jobs were secure enough to see them through the pandemic, which still has no end in sight. It was also unclear whether non-residents were even welcome in cottage country.

In May, despite their doubts, Matt and Caylen decided to start looking at cottages, assuming the wedding would get cancelled. They set a budget of around $400,000 and scanned a range of properties online, from Muskoka to Kawartha Lakes. When they found the listing for the bungalow, they liked the recently renovated interior, particularly the exposed beams in the living room. So, they decided to drive up and check it out. The couple wore masks and gloves while they looked at the place.

Matt grew up cottaging on a lake near Parry Sound, so he was initially hesitant about buying a riverfront property, because it didn’t jibe with the typical cottage lifestyle of speedboats and water sports. But boating is permitted on the river, which connects to Gull and Minden Lake. It also cuts through the town of Minden, making it possible to boat into town to get groceries. They took 24 hours to think about it and submitted an offer for $375,000, conditional on a home inspection and financing. The seller countered with $385,000 and they agreed.

Matt and Caylen initially planned to spend weekdays “working from home” at the property, but have since decided they want to preserve it as a weekend retreat. Eventually, they’d like to buy an aluminum boat with a small motor, to shuttle in and out of town. And they still plan to get married, maybe next year, but might have to scale down the celebration. 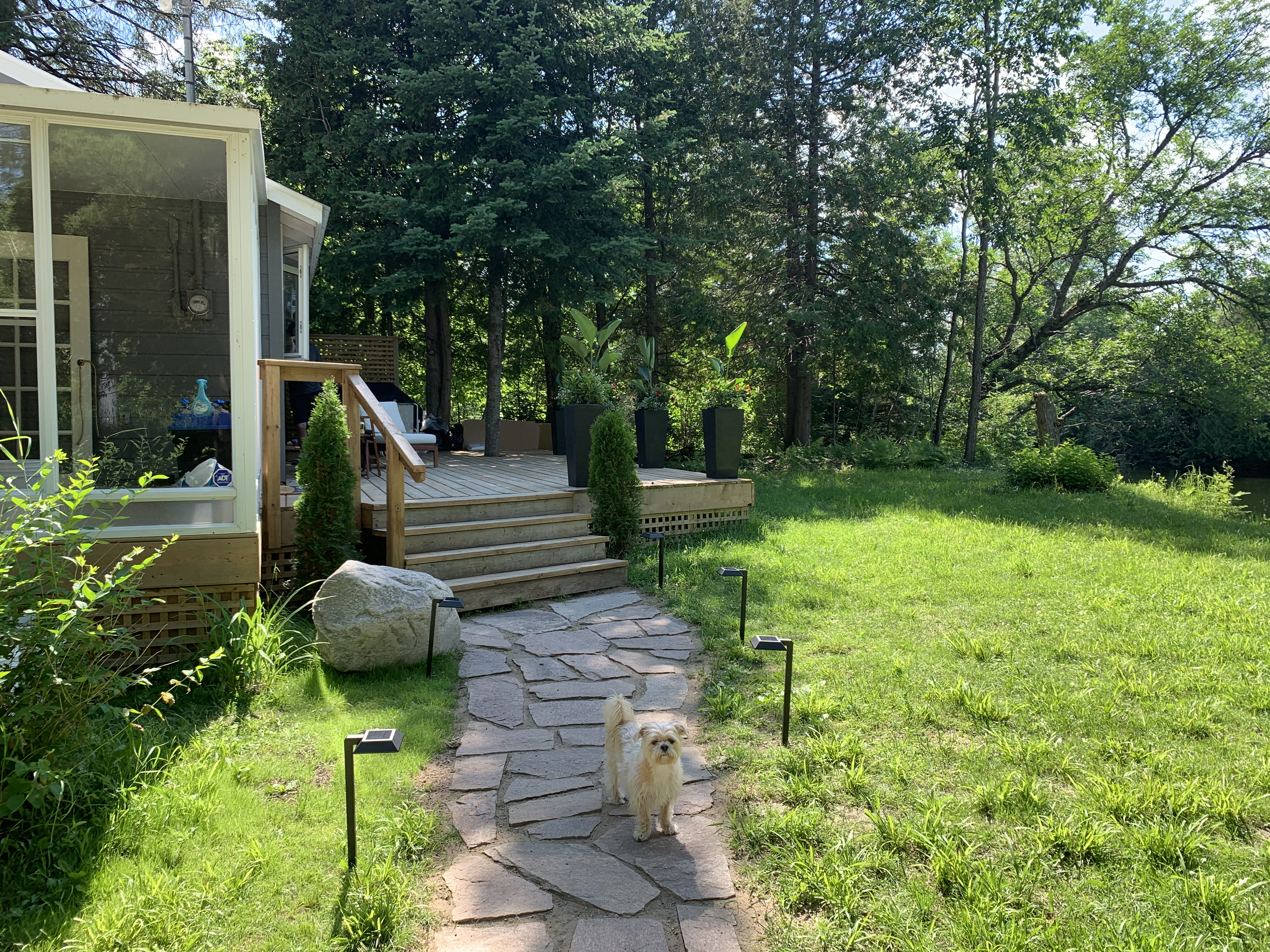 The seller painted the original cedar siding grey and built the pressure-treated wood deck, which is about 13 feet by 30 feet: 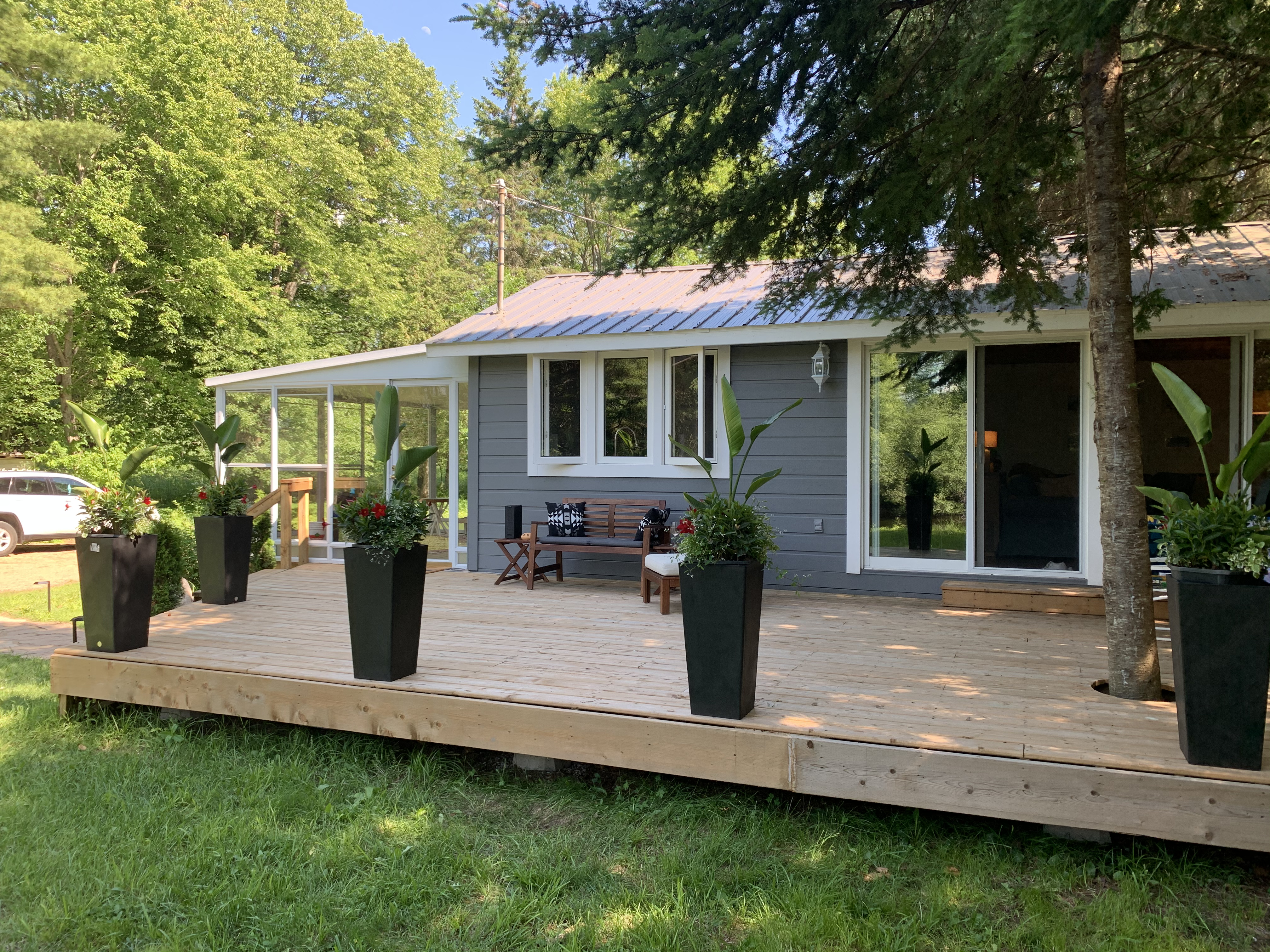 The deck overlooks the river: 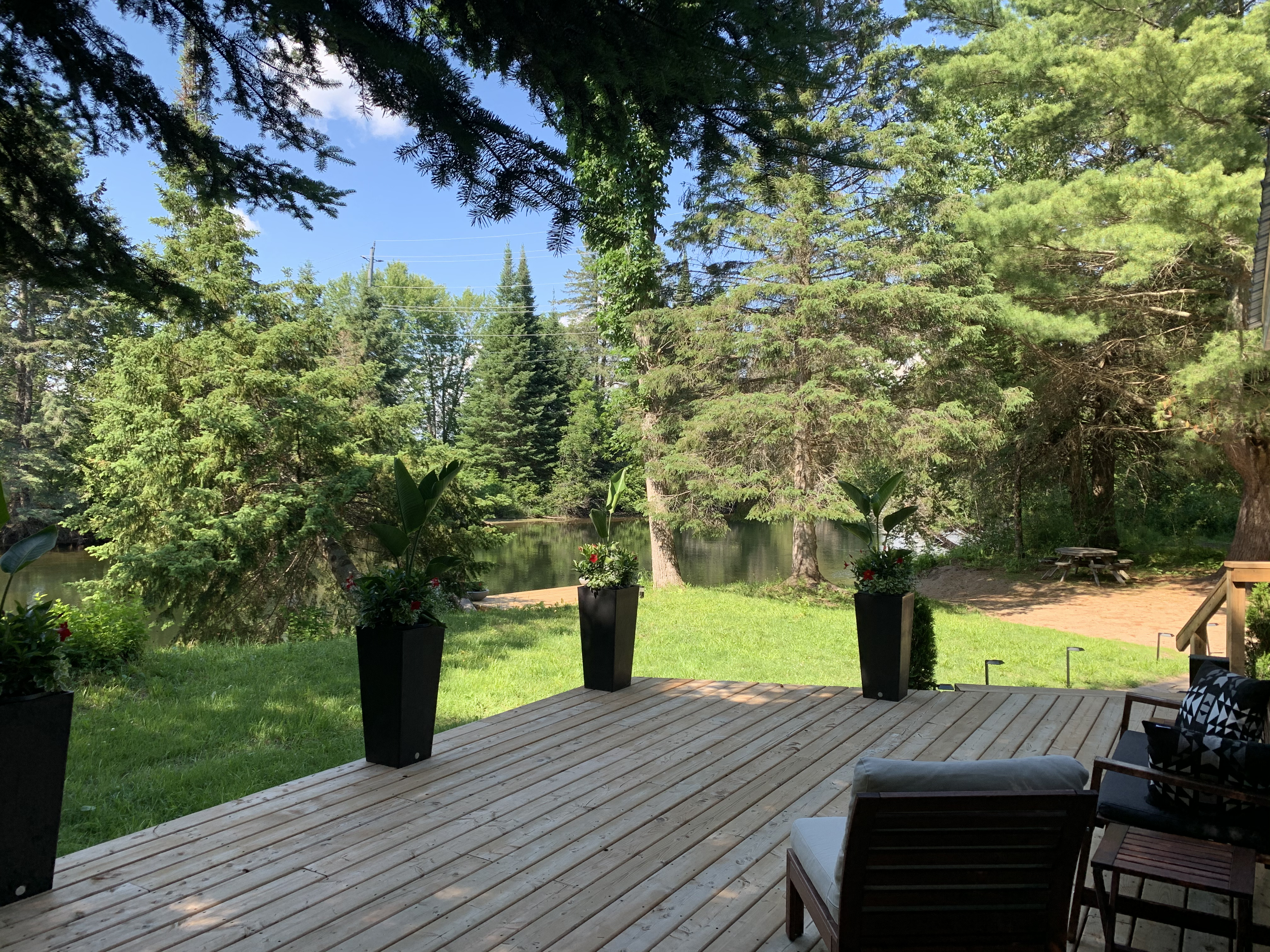 There are laminate floors and white-washed pine ceilings throughout the cottage: 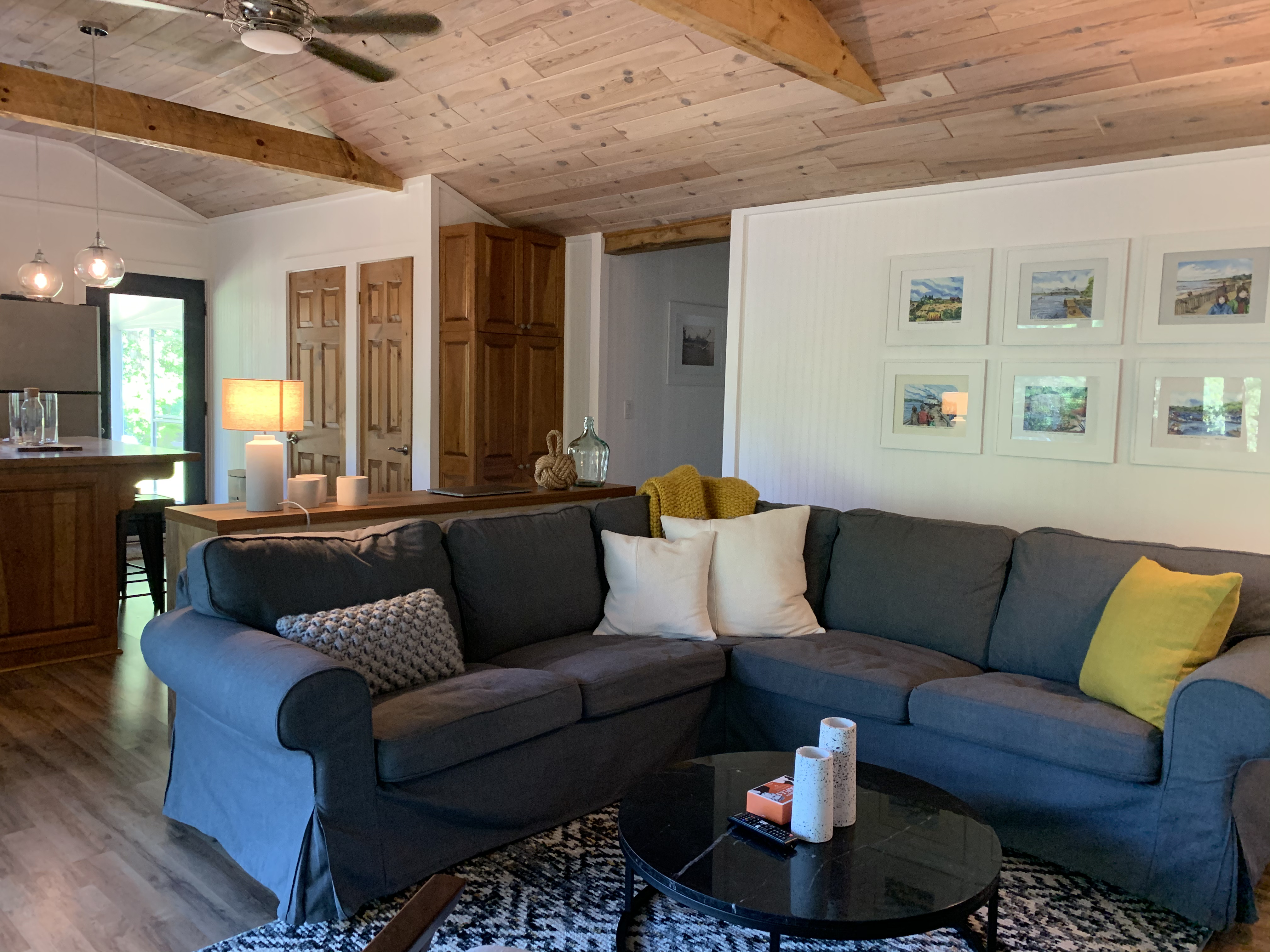 The seller hired contractors to install the propane fireplace. He built the surrounding pine mantel to match the ceilings: 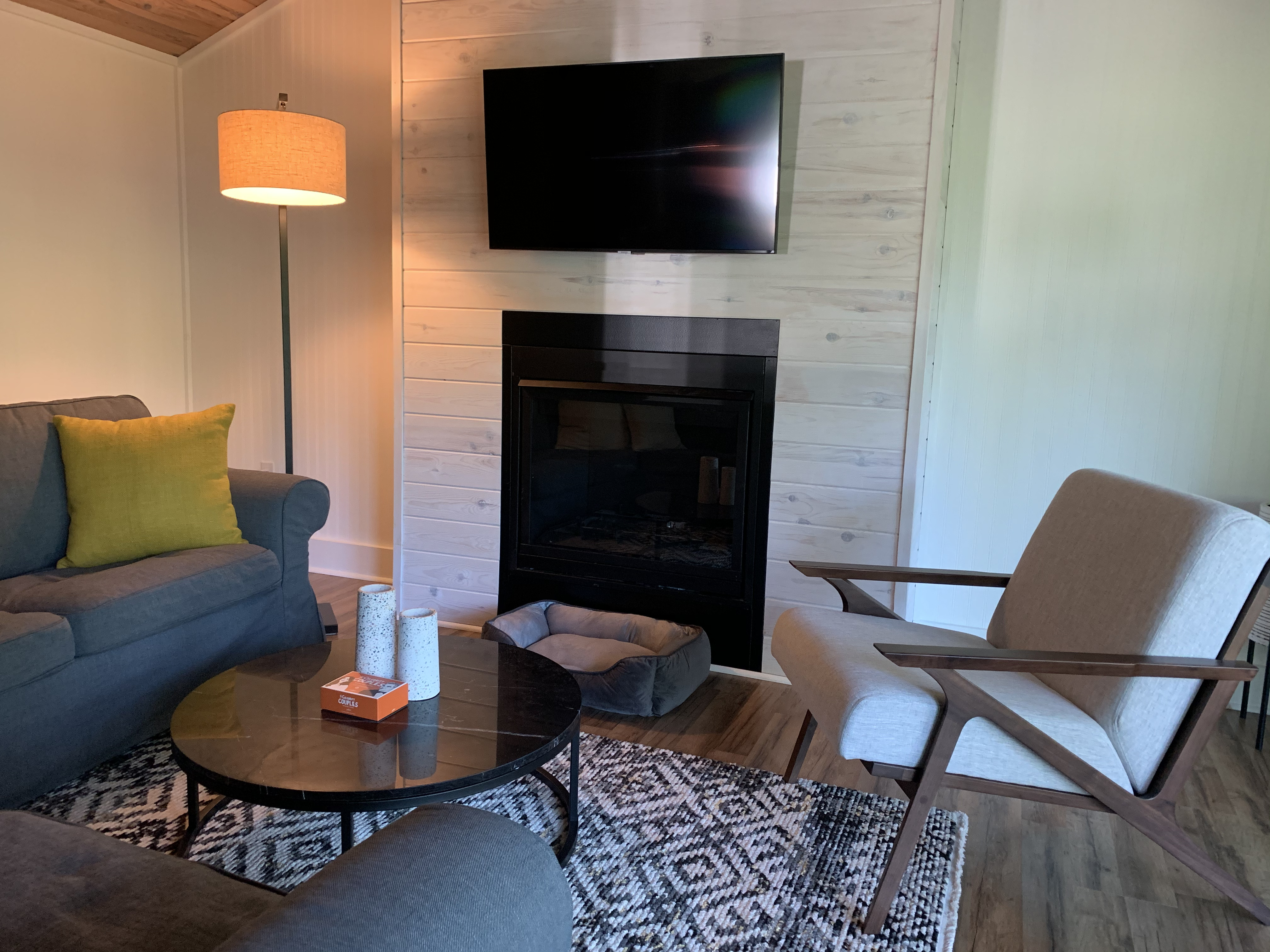 Here’s a better look at the the 11-foot ceilings in the open-concept living area: 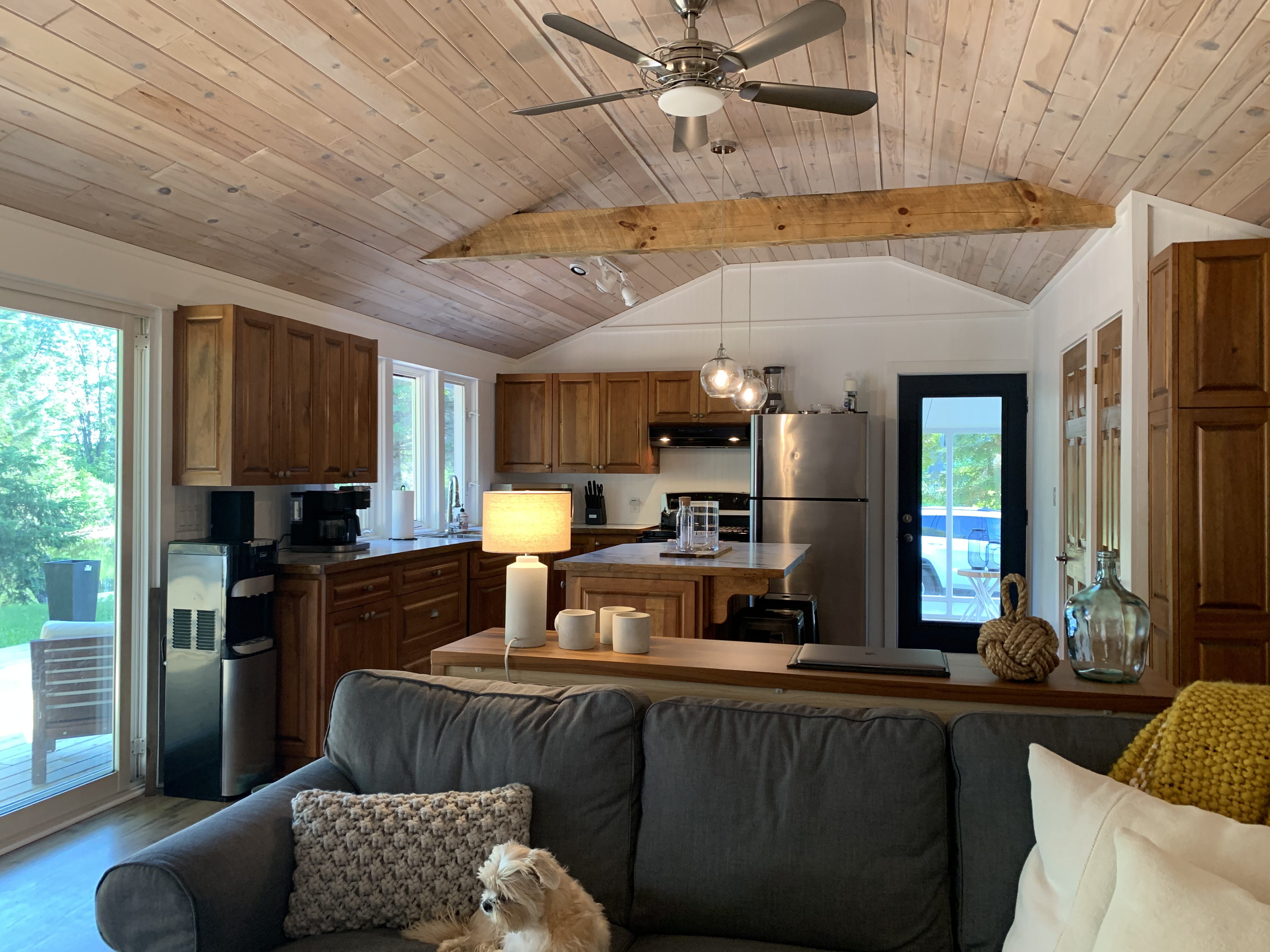 There are quartz-style laminate counters and pine cabinets in the kitchen: 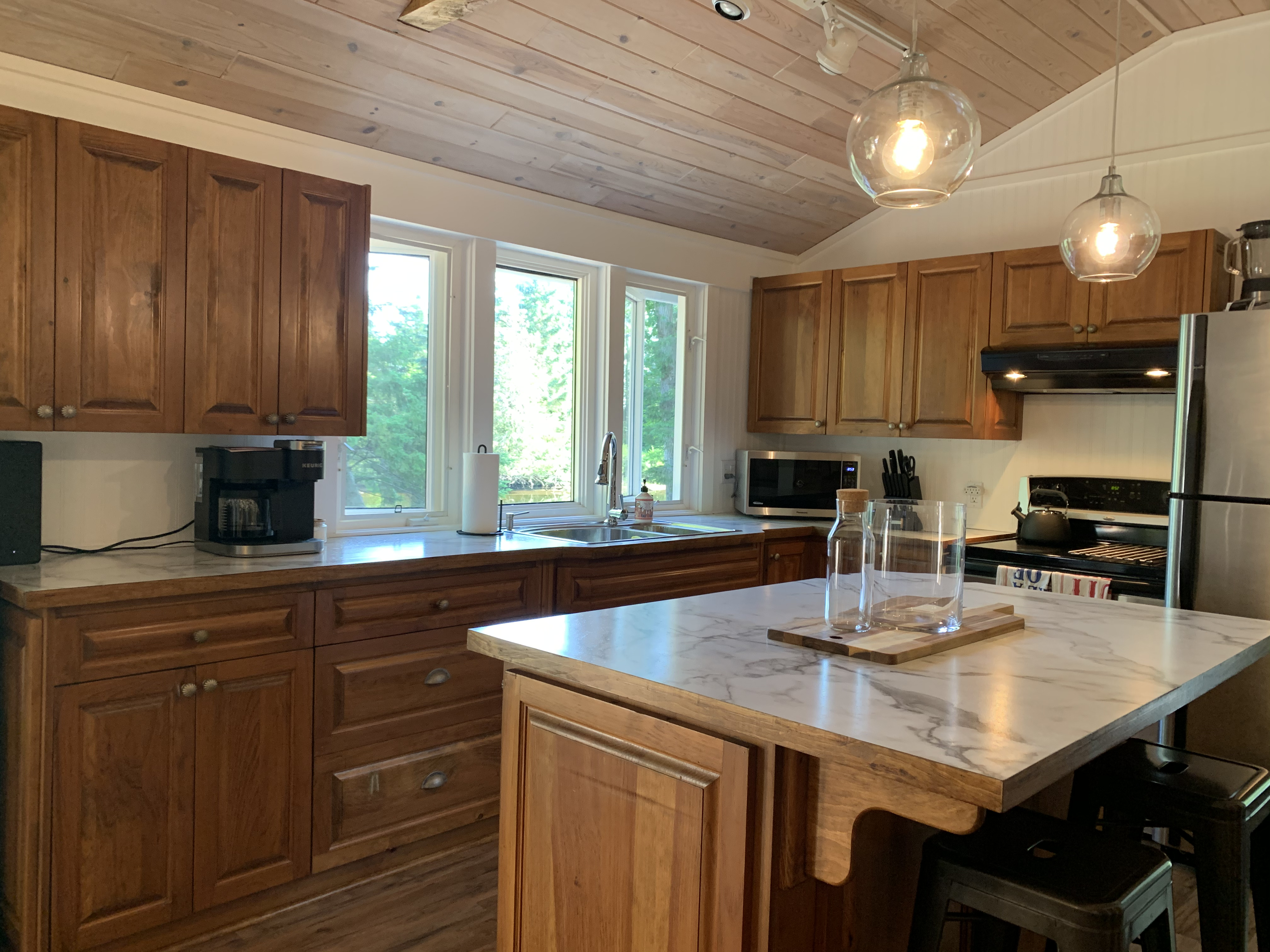 The kitchen connects to a sunroom, where the buyers plan to add a patio set and propane heater for winter: 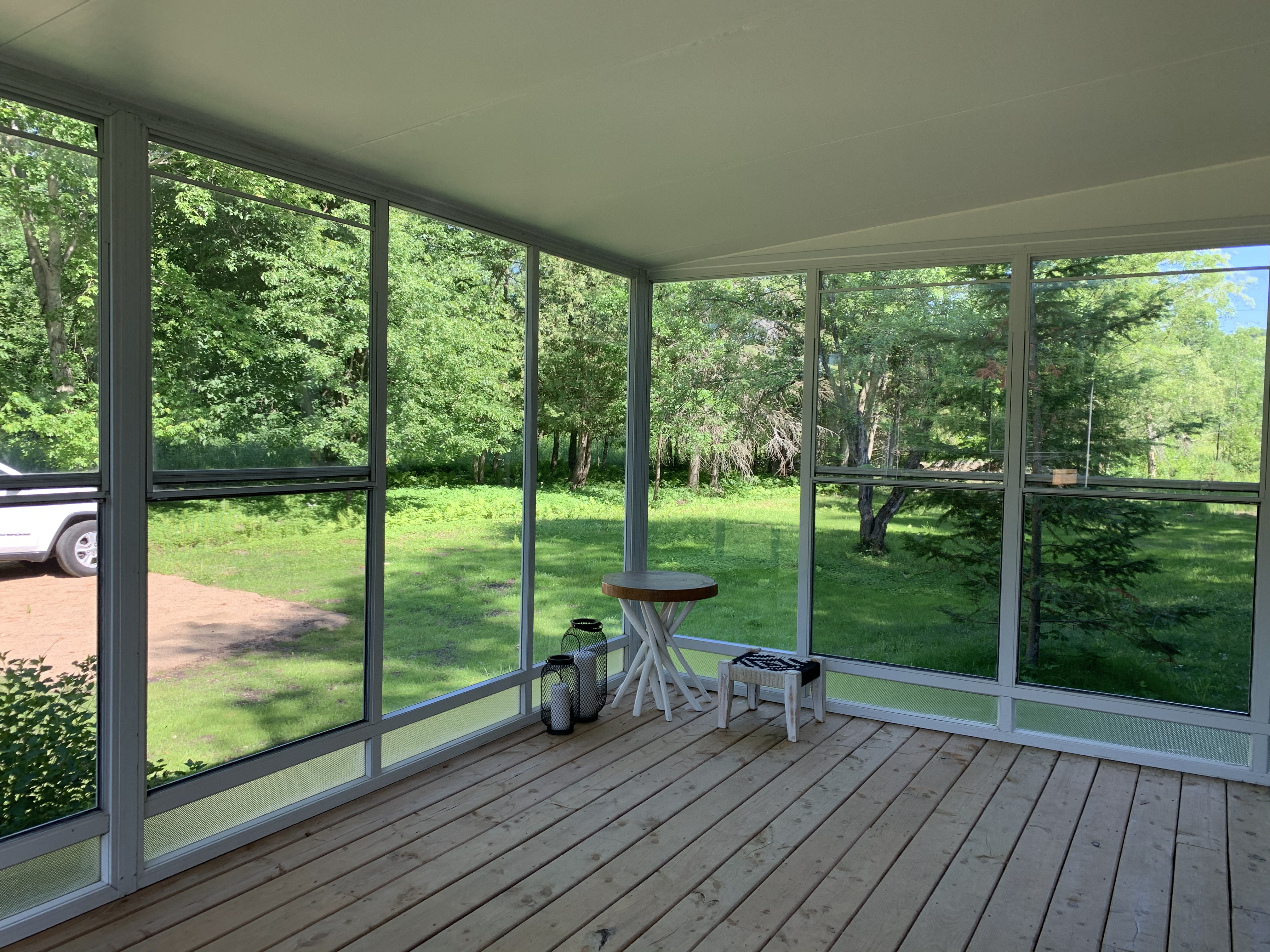 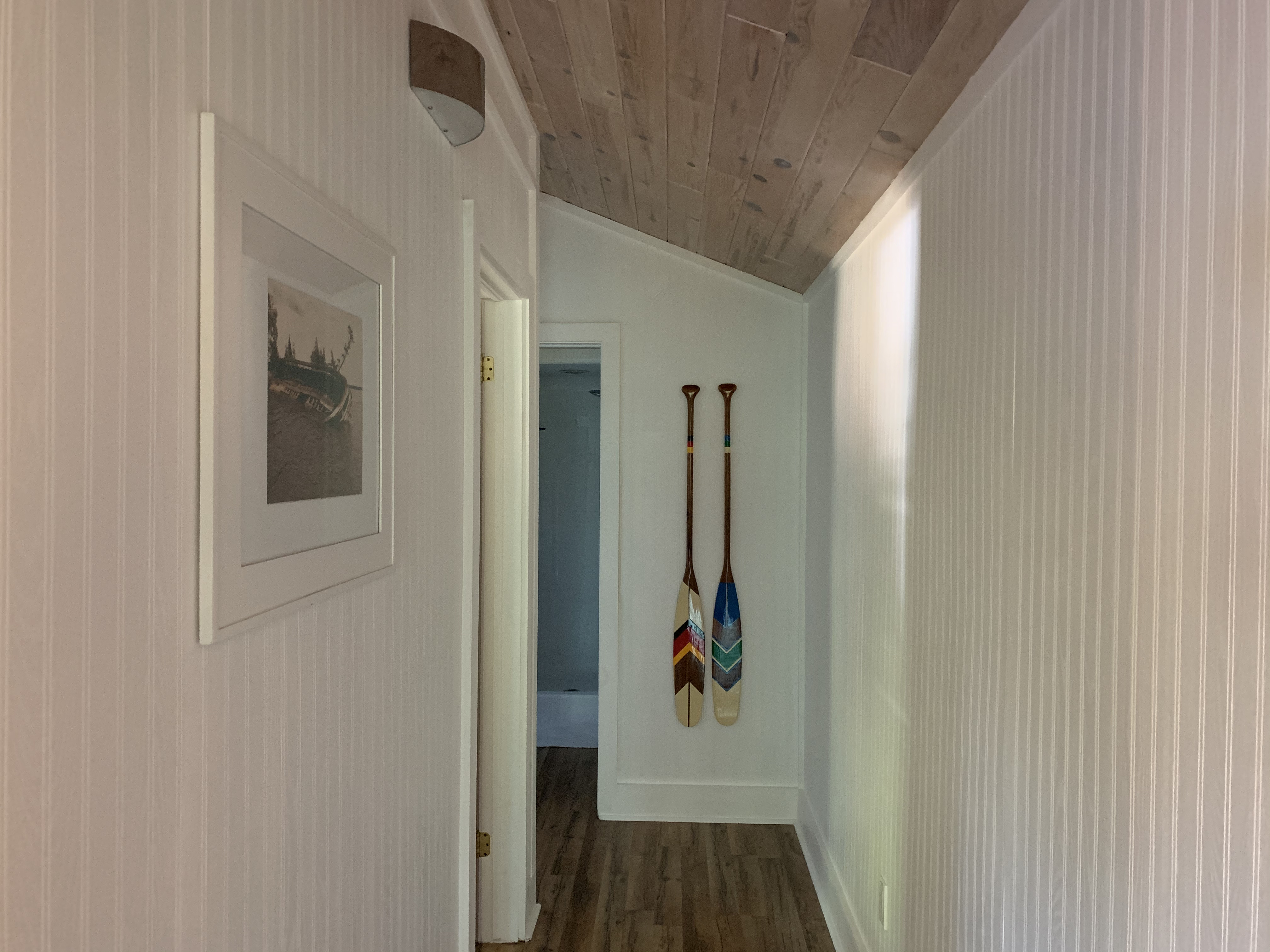 Here’s the master bedroom, which has sliding glass doors that lead to a second deck: 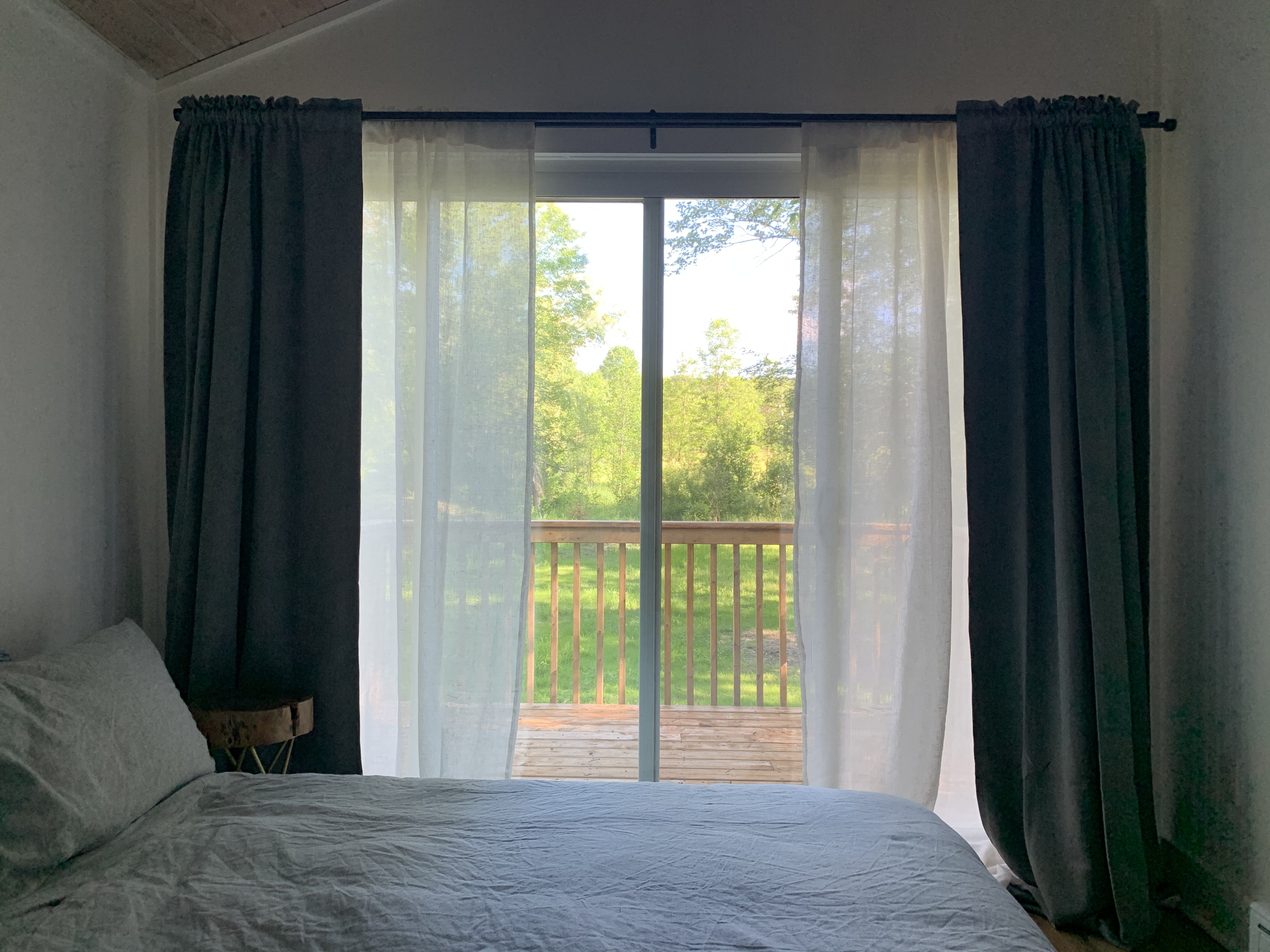 This is the guest room, where the buyers added a desk: 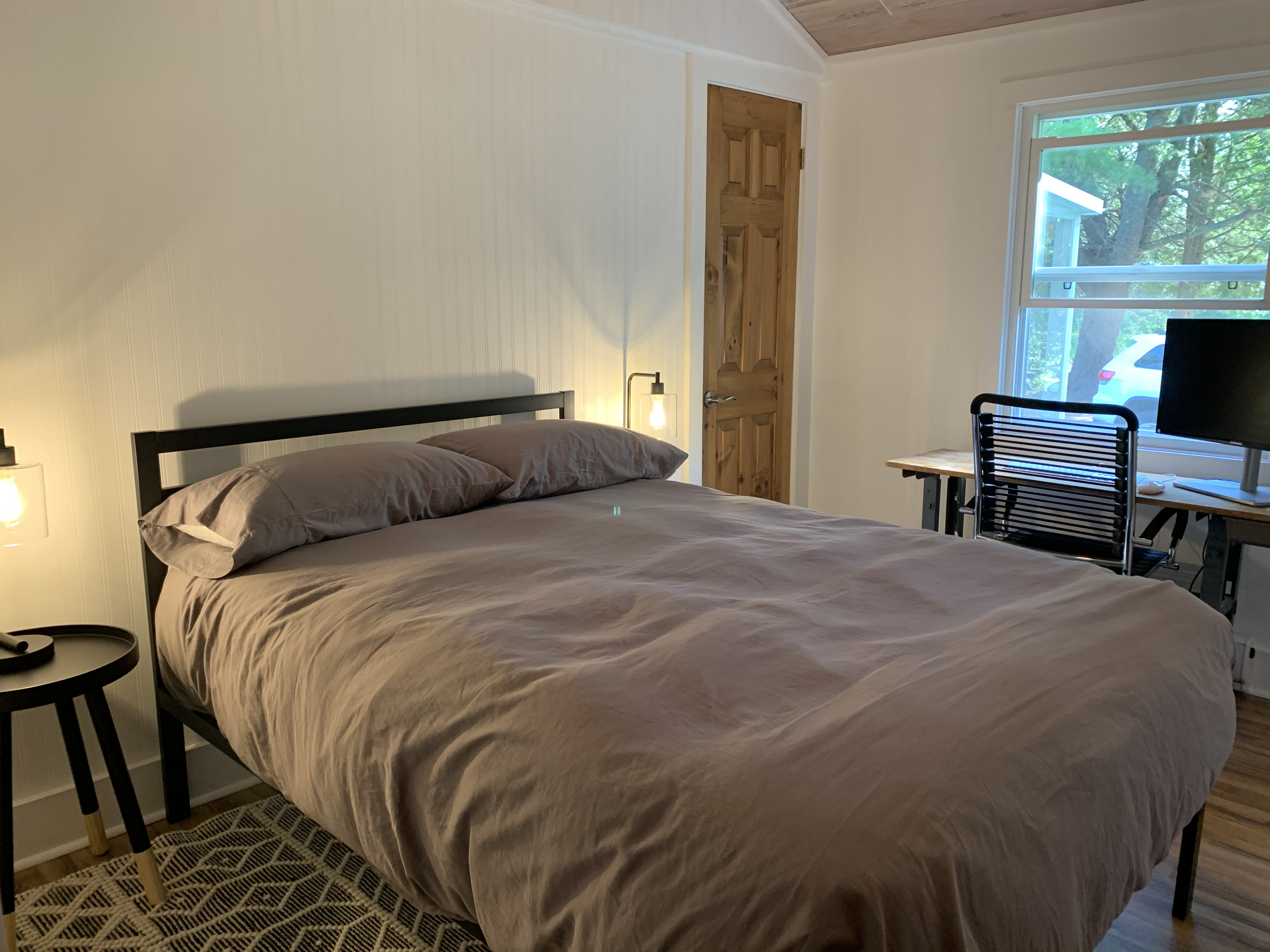 The seller installed a new shower in the bathroom: 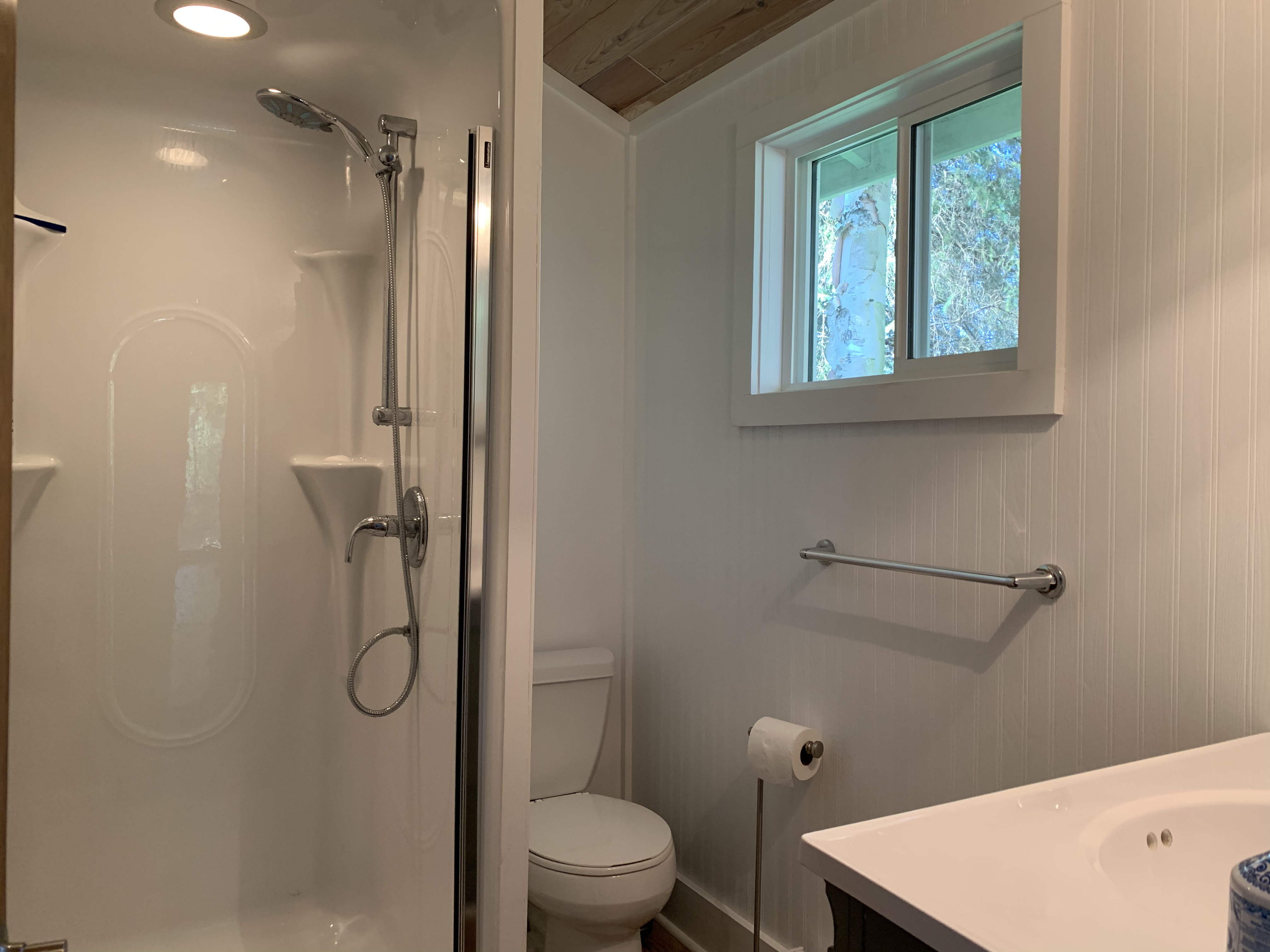 After listing the property, the seller added the dock, which is built on metal stands above the water. That way, it doesn’t need to be removed in winter when the river freezes. 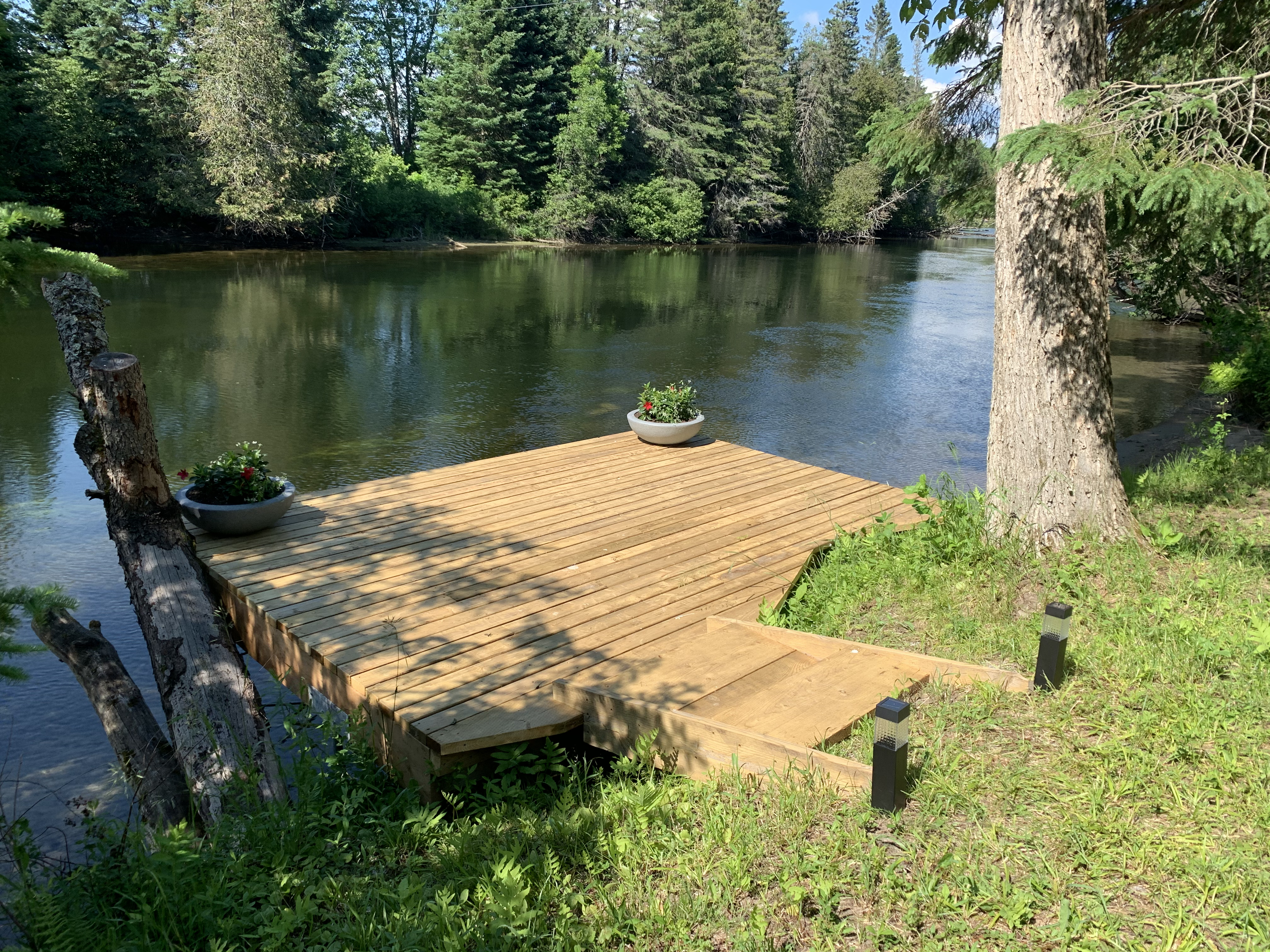 The seller added new sand to the beach area next to the dock, in order to smoothen out the path. It could function as a boat ramp, too: 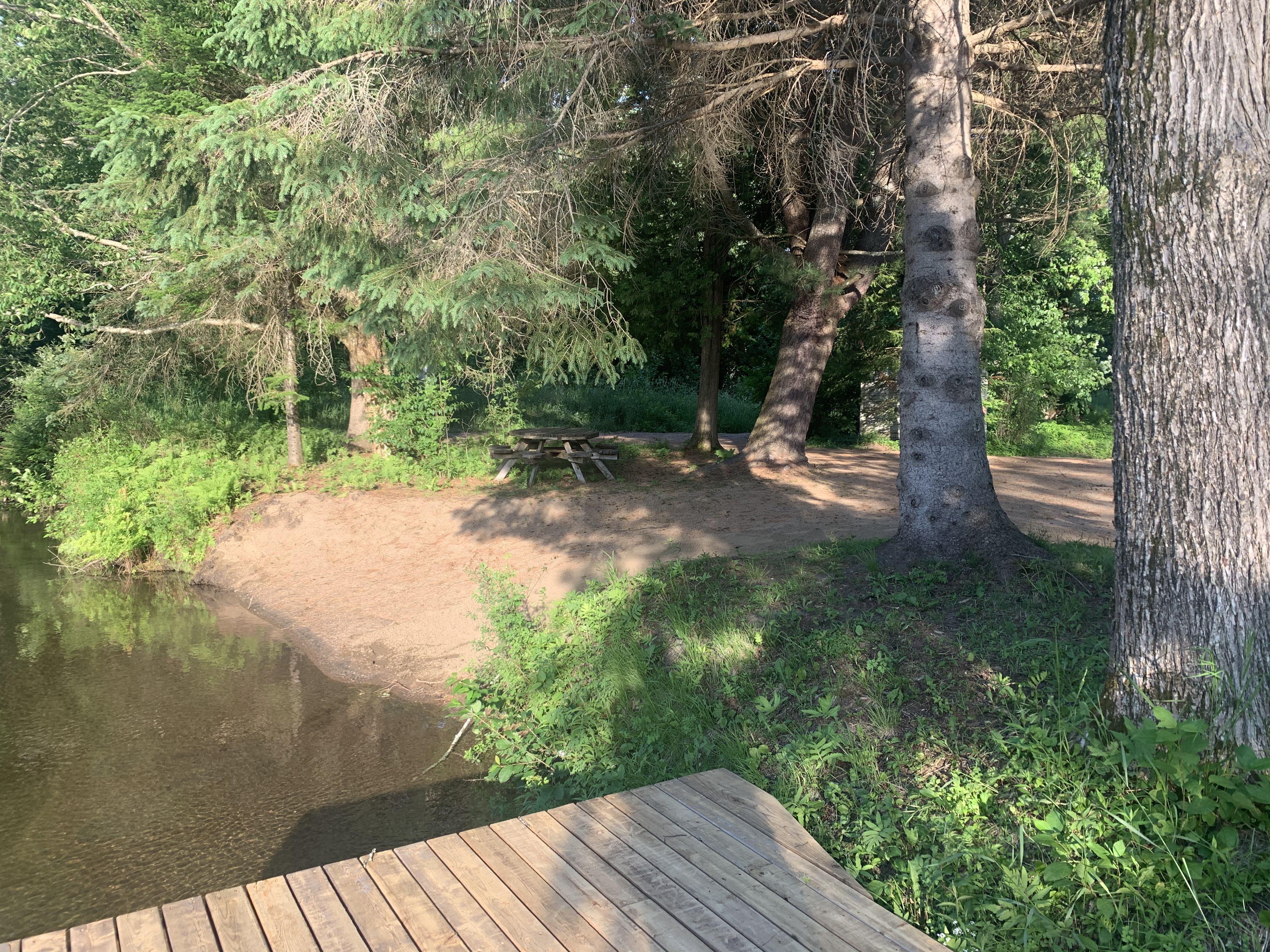