Dear Urban Diplomat: Can I give my Uber driver a one-star rating if he annoys me?

Dear Urban Diplomat: Can I give my Uber driver a one-star rating if he annoys me?

When Uber drivers end a ride by saying, “I’ll give you five stars if you give me five stars,” I automatically give them a one. I can’t stand that comment—it’s like a server demanding a big tip at the end of a meal. Last time I delivered a single star, though, my friend ripped into me for being cruel. Who’s right? And what’s the etiquette when it comes to rating Uber drivers?

It’s okay to be peeved, but keep it in perspective. Expressing your irritation through a one-star rating, to borrow your analogy, isn’t the same as stiffing a server on her tip—it’s telling her manager she spit in your fish tacos. Uber is cagey about the specifics of its secretive star system, but, according to Internet scuttlebutt, a driver can get suspended or even banned if his average rating dips below 4.6. In other words, stars are serious business; a subpar rating could cost an Uber cabbie his job. Next time a driver asks to star swap, politely tell him you’ll rate him fairly. Dock him a notch if you must, but save the one-star salute for the tailgating, law-breaking maniac who deserves it. 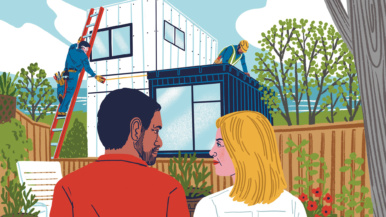 Is there anything I can do about it? Please help!

What should I do?

Should I inform the condo board?

I’m sick of looking at his rusty old barbecue

Should I try to convince her to put her travel plans on hold indefinitely?