A sneak peek at the Ritz-Carlton Toronto’s new look

A sneak peek at the Ritz-Carlton Toronto’s new look

Although the Ritz-Carlton only landed in Toronto eight years ago, the interiors didn’t age well: what was originally an ode to Canadiana had started to look tired. There were orange-y maple walls everywhere, and the guest rooms had a cluttered appearance, with finishes and amenities that didn’t always justify the steep price of admission. Compared to some of the other fancy-schmancy hotels that have popped up downtown in the past few years, the place felt ancient.

Four years ago, management reached out to local firm DesignAgency to see if there was a way to reinvigorate the hotel’s look. The result was a plan for a drastic, multi-phase renovation that would give the space a contemporary vibe. The rejigged hotel would include theatrical touches to allude to its proximity to the Toronto International Film Festival. The first phase of the revamp—which included renovations of all the hotel’s club-level rooms, the spa lobby and a dining room in TOCA, the on-site restaurant—has just wrapped up. Next up will be the lobby, the Ritz Bar and the rest of TOCA. Here’s a peek at what’s been done so far.

Here’s the new private dining room inside TOCA. It can seat 22 for dinner, or be divided into two separate rooms. It formerly doubled as a wine cellar, but DesignAgency gutted the space, then added walnut flooring, leather-panelled walls and sliding glass doors. The long walnut table was custom-designed by ALX Raw, and the chairs are by Philippe Starck: 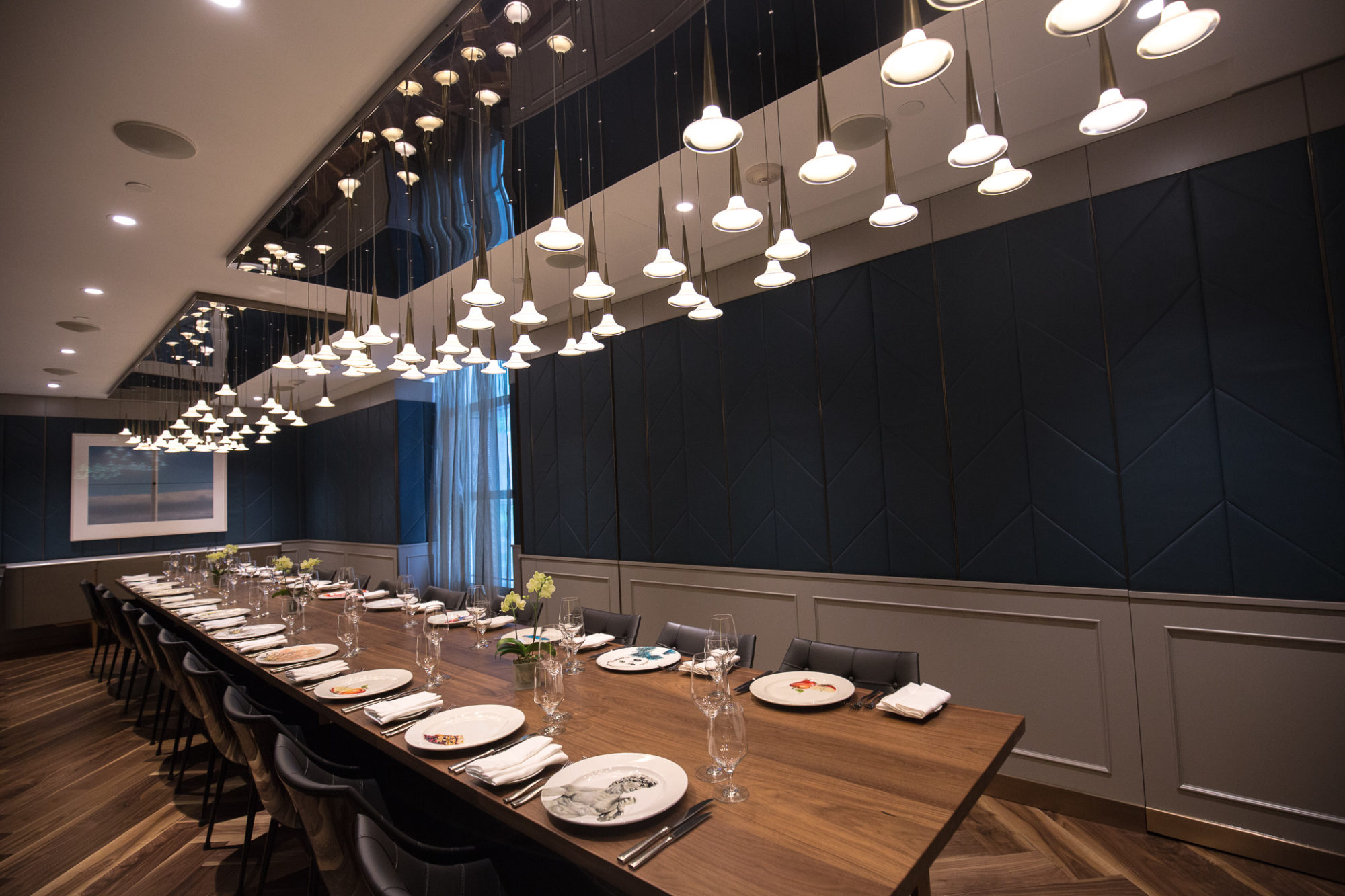 The art is by Newfoundland photographer Ned Pratt: 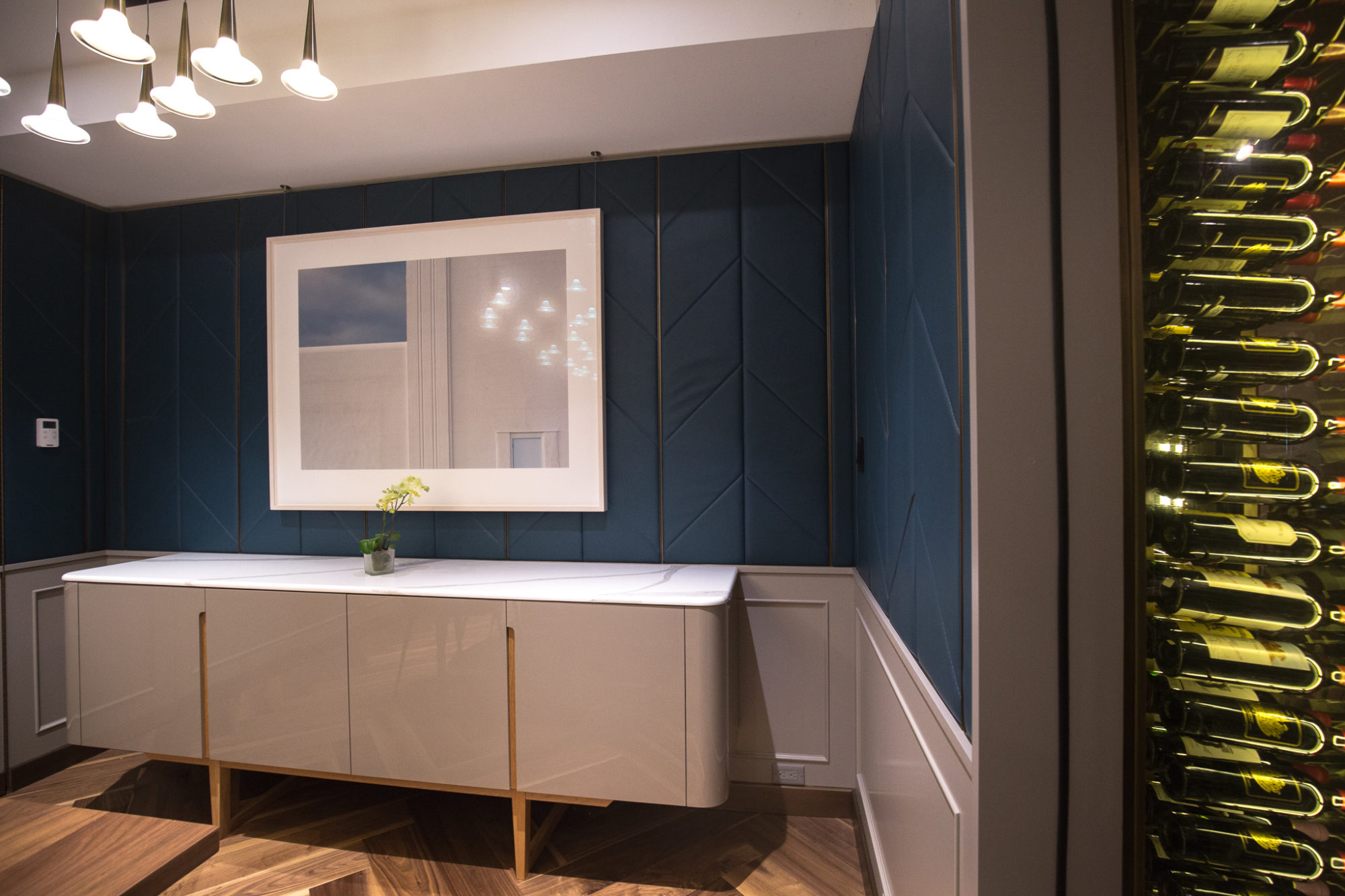 The Ritz has been commissioning custom plates from Jacqueline Poirier, a.k.a. The Crazy Plate Lady, since she started as a server at TOCA eight years ago. The table is outfitted with her kooky creations: 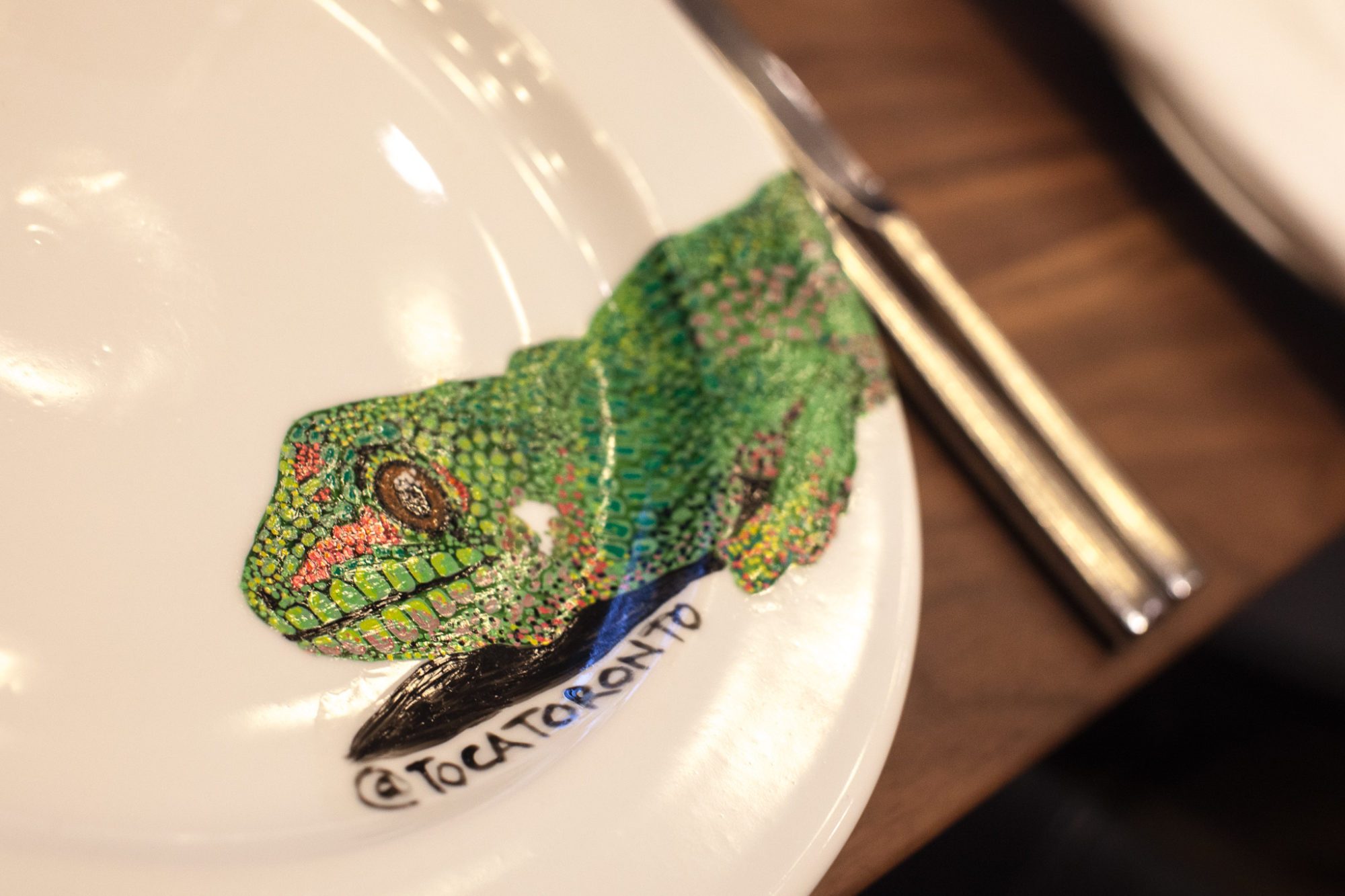 This is a corner club-level suite, with a pull-out couch and king bed. Most hotels do a refresh of their “soft goods” (furnishings, linens, etc.) every seven years. DesignAgency went a bit further. They gutted all the club rooms and replaced everything down to the carpets, wallpaper and lighting. Each room is classic and understated, with pops of rich velvet. Fortuny lamps add some theatrical flourishes: 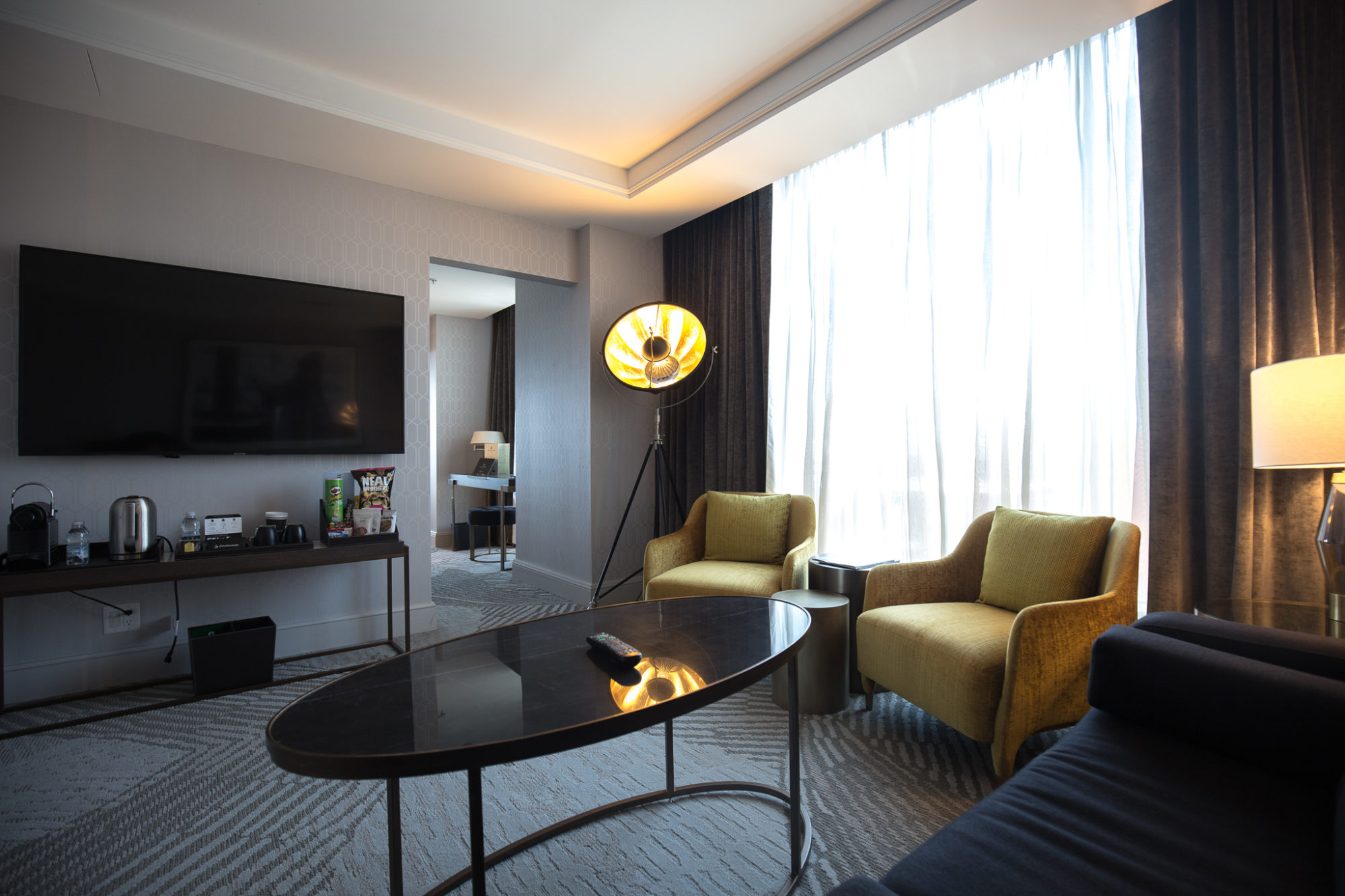 Caitlin Cronenberg, who regularly does portrait series at TIFF, outfitted the rooms in dramatic, large-scale pieces. This photo is of actor Sarah Gadon: 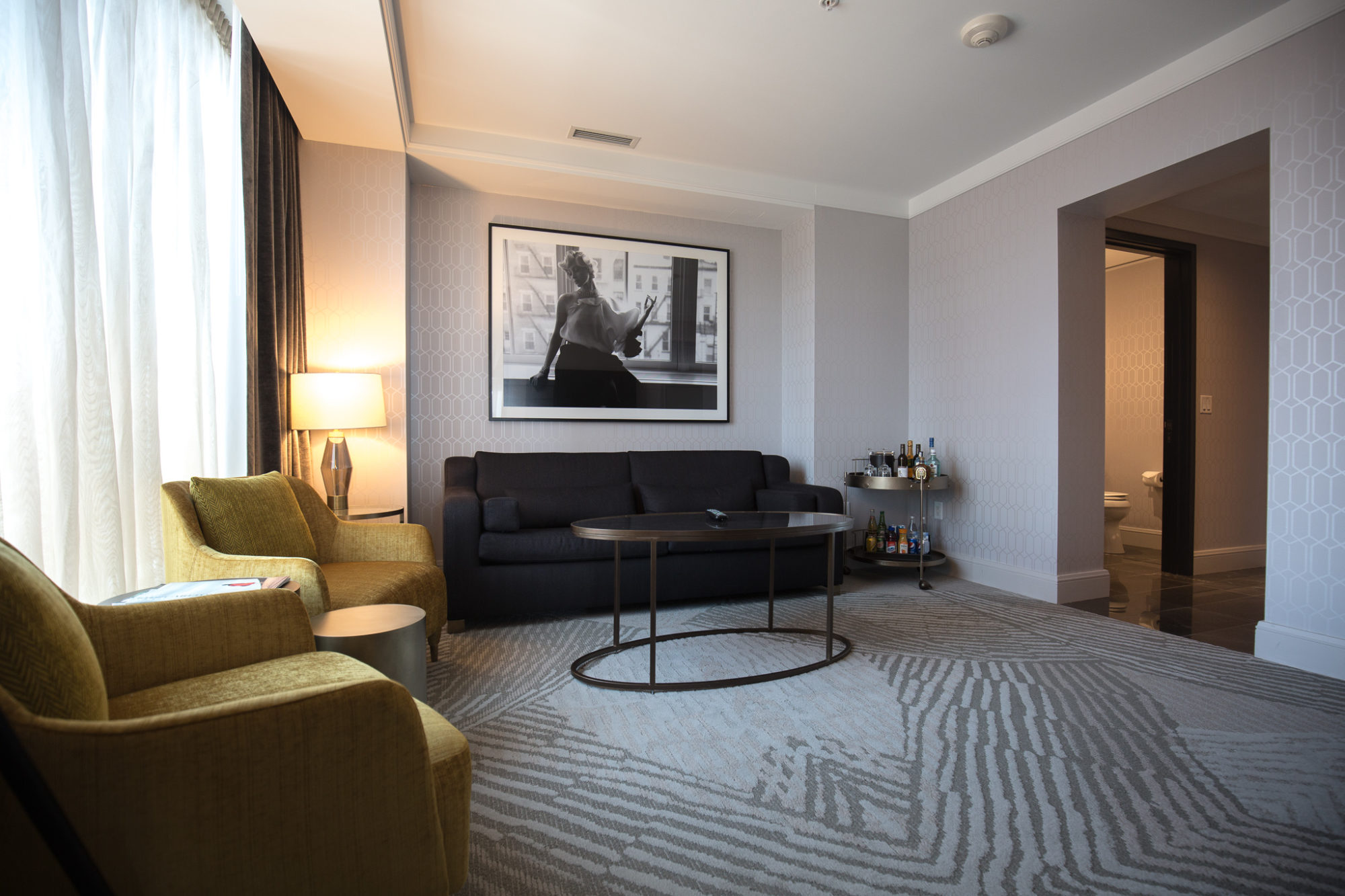 The beds at the Ritz used to be covered in colourful decorative pillows. Now, the pillow selection is simple and refined. The brass detailing on the headboard was inspired by vintage travel trunks, and the bottom of the bed is lined in motion-detecting LED lights, so guests don’t have to look for a switch when they get up in the middle of the night: 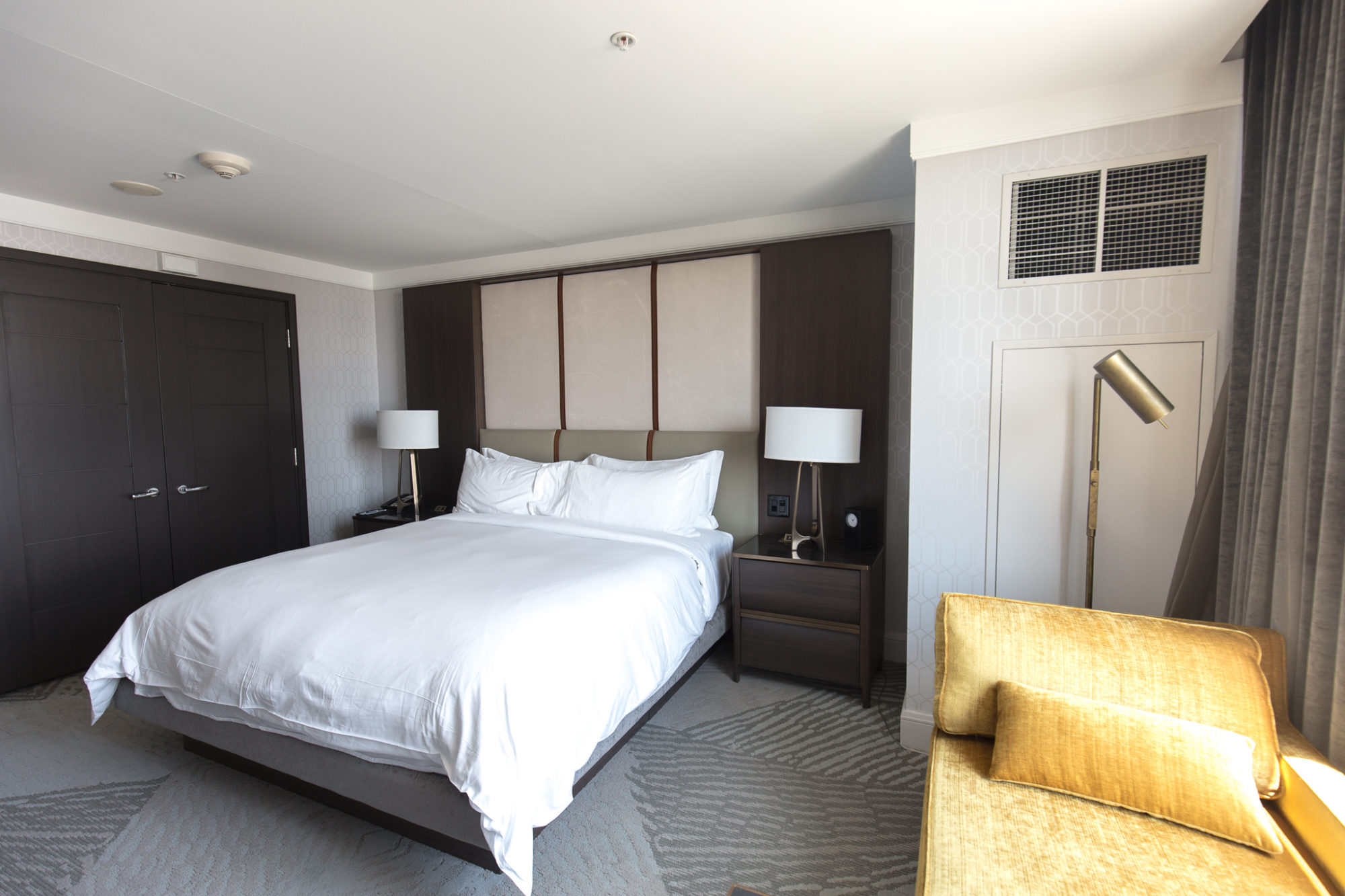 The views have remained the same: 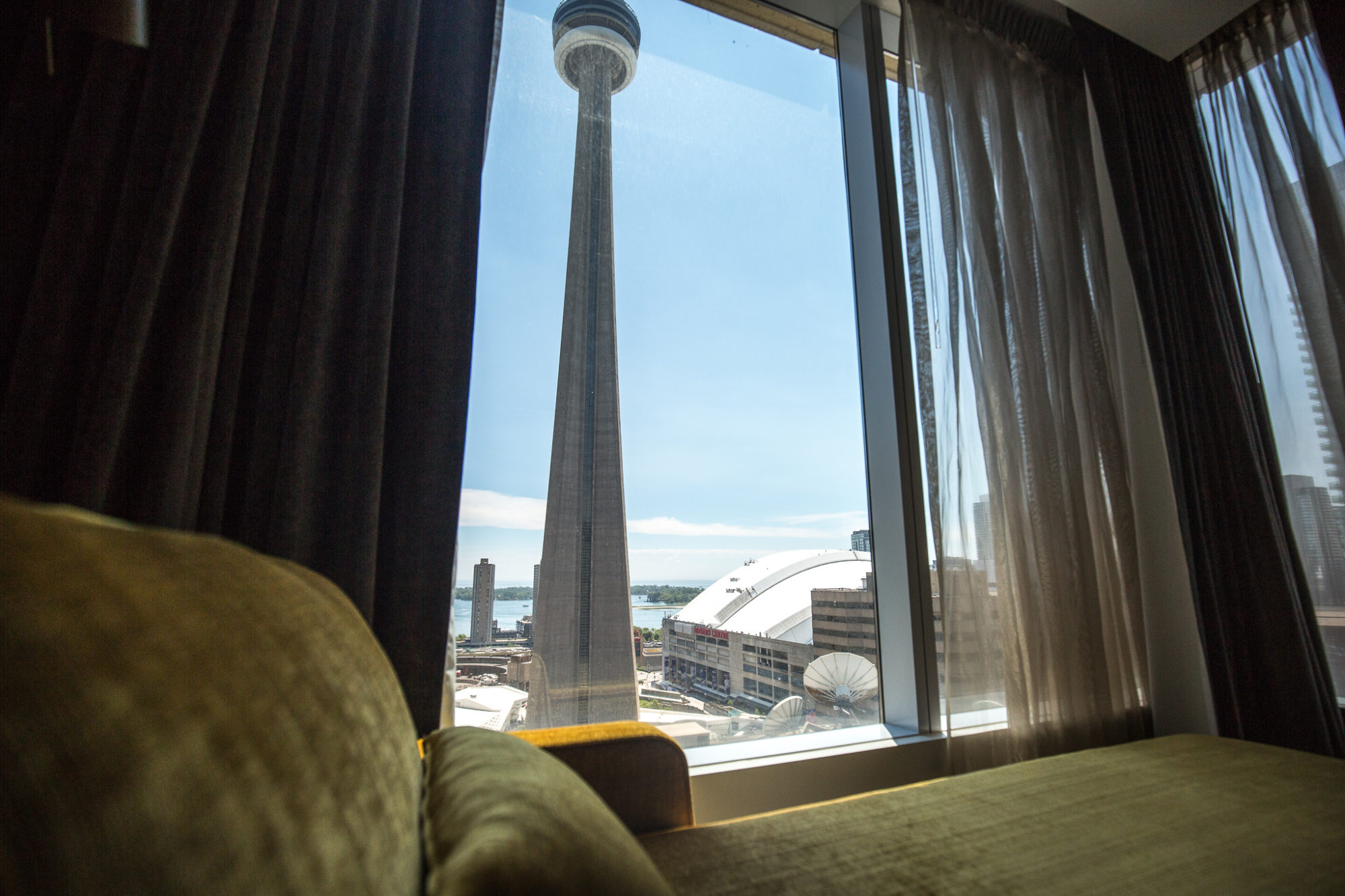 Here’s another room, with a cozy lounge. DesignAgency got rid of all the large chunky desks and added sleek custom couches and multi-level nesting tables that can work for a meal or a laptop. The pattern on the custom carpet is meant to mimic the look of frozen ice on Lake Ontario: 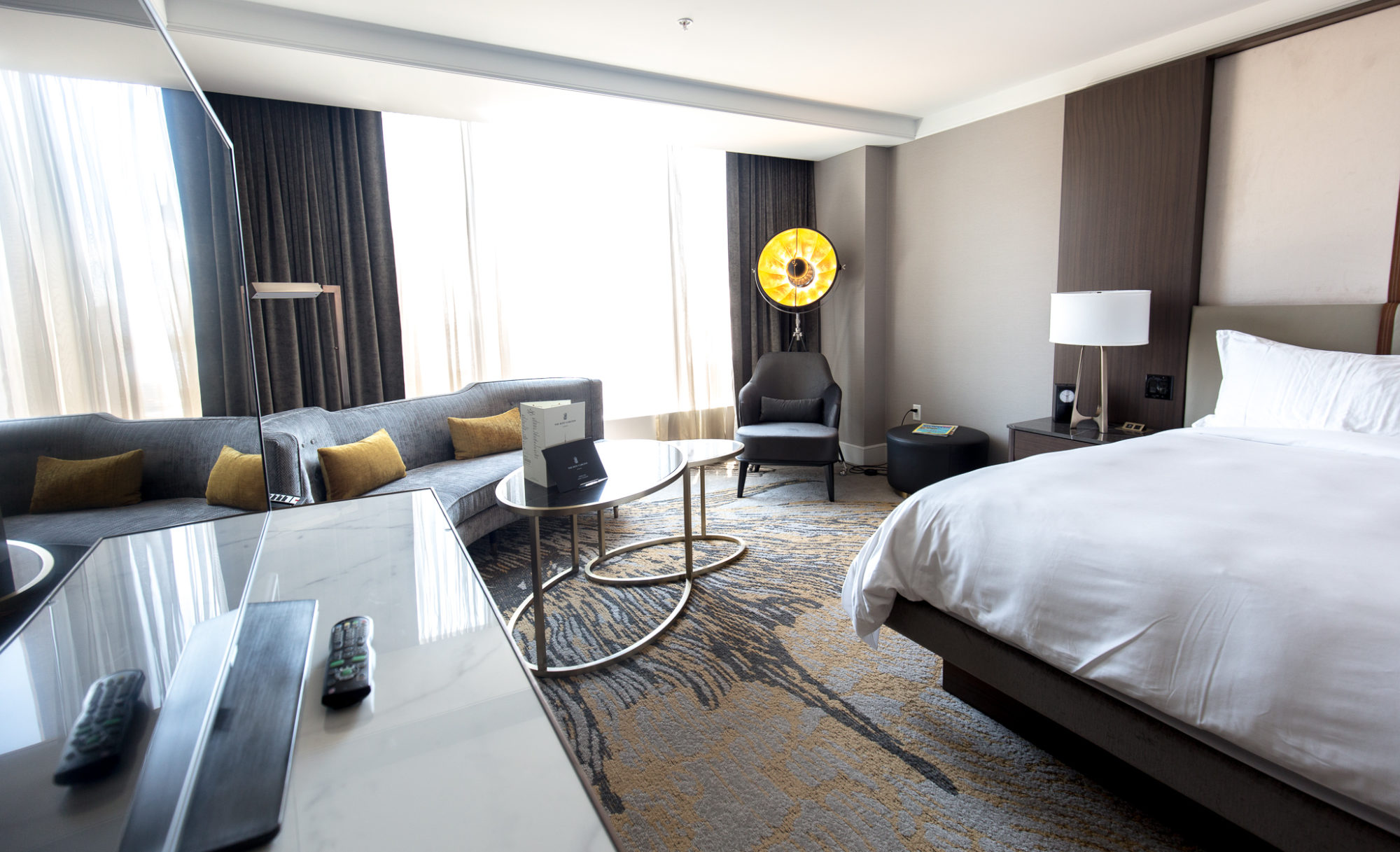 The bathrooms weren’t totally gutted, but they have new vanities and mirrors, as well as new, brighter lighting systems (and more Cronenberg art): 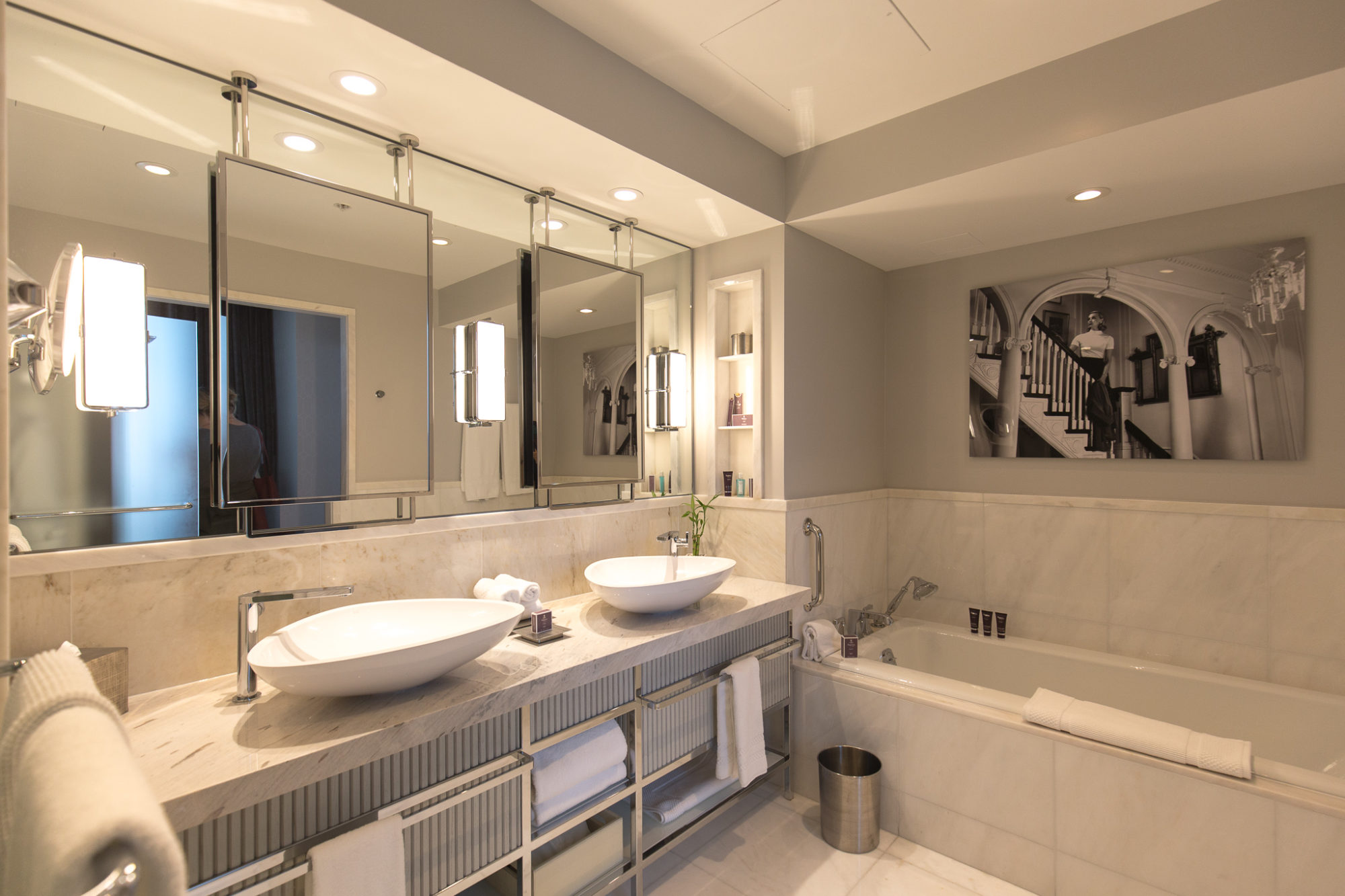 The club-level lounge has been completely refurbished: 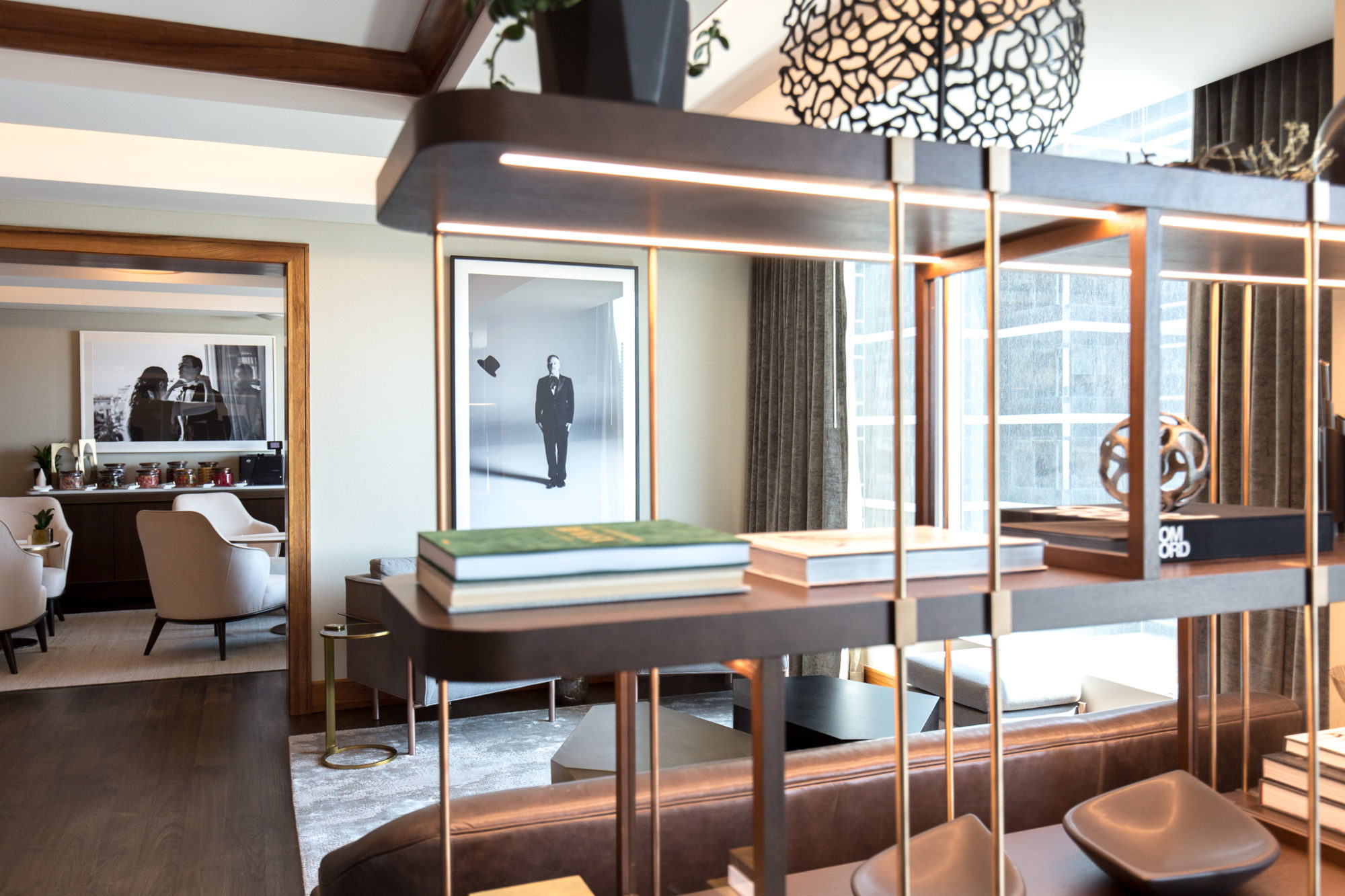 It now offers a massive selection of gourmet snacks: 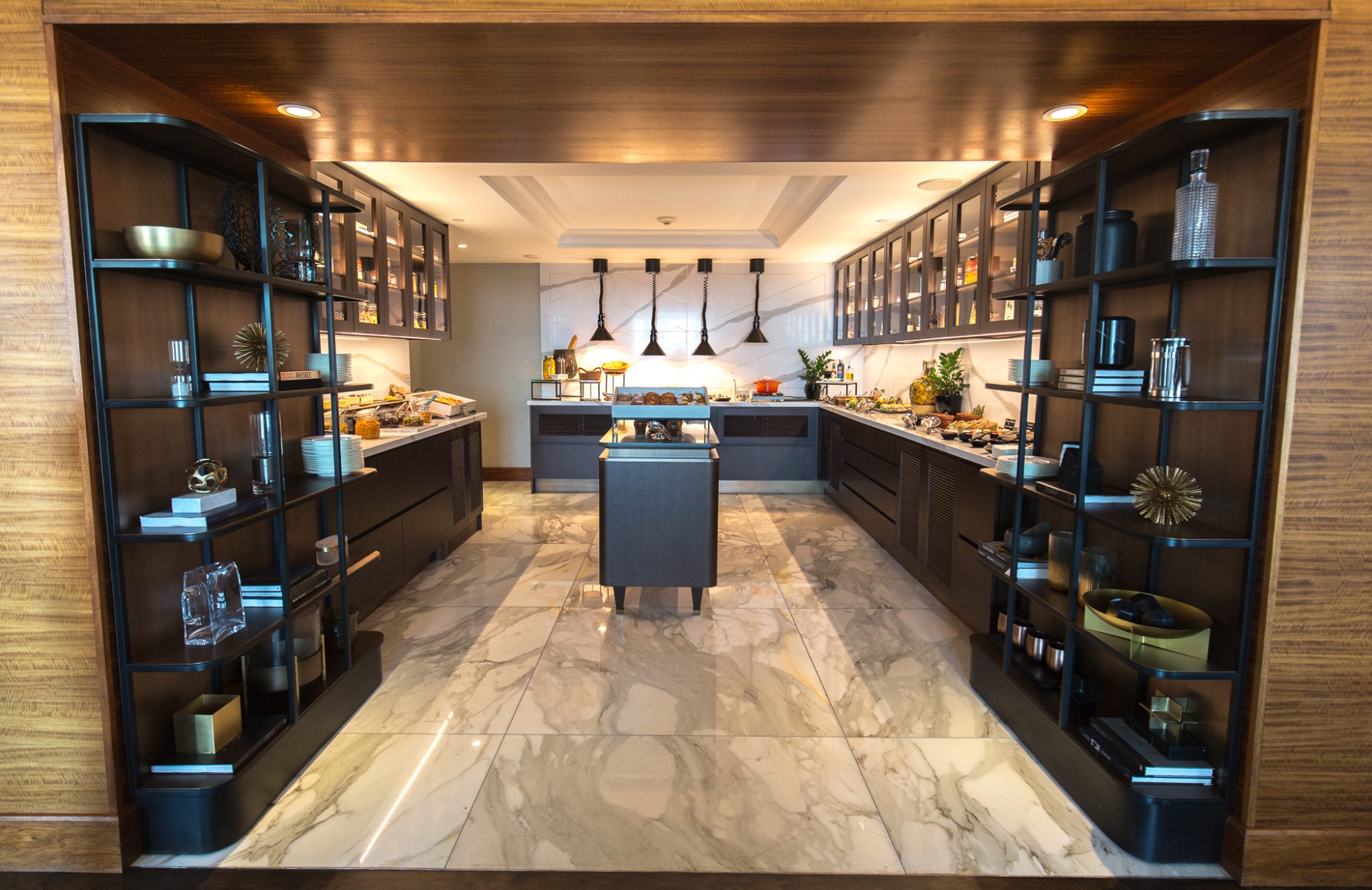 And, of course, all the G&Ts visitors could want: 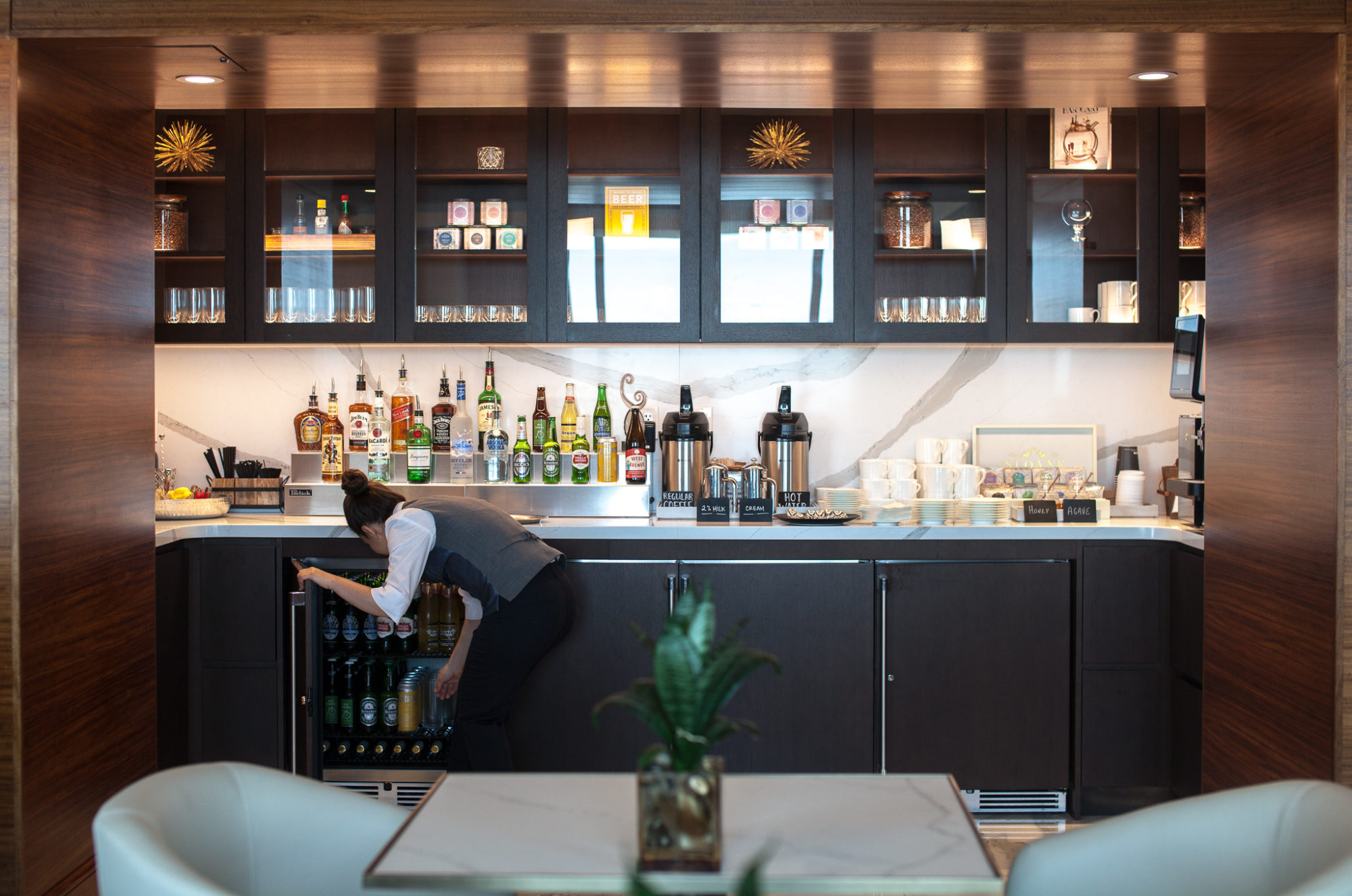 In the spa, DesignAgency’s goal was to get rid of what they called a “Shoppers Drug Mart vibe.” They made the space brighter and cleaner, eliminated product clutter and built comfy seating for visitors. They also lined the walls in wavy tambour wood panelling: 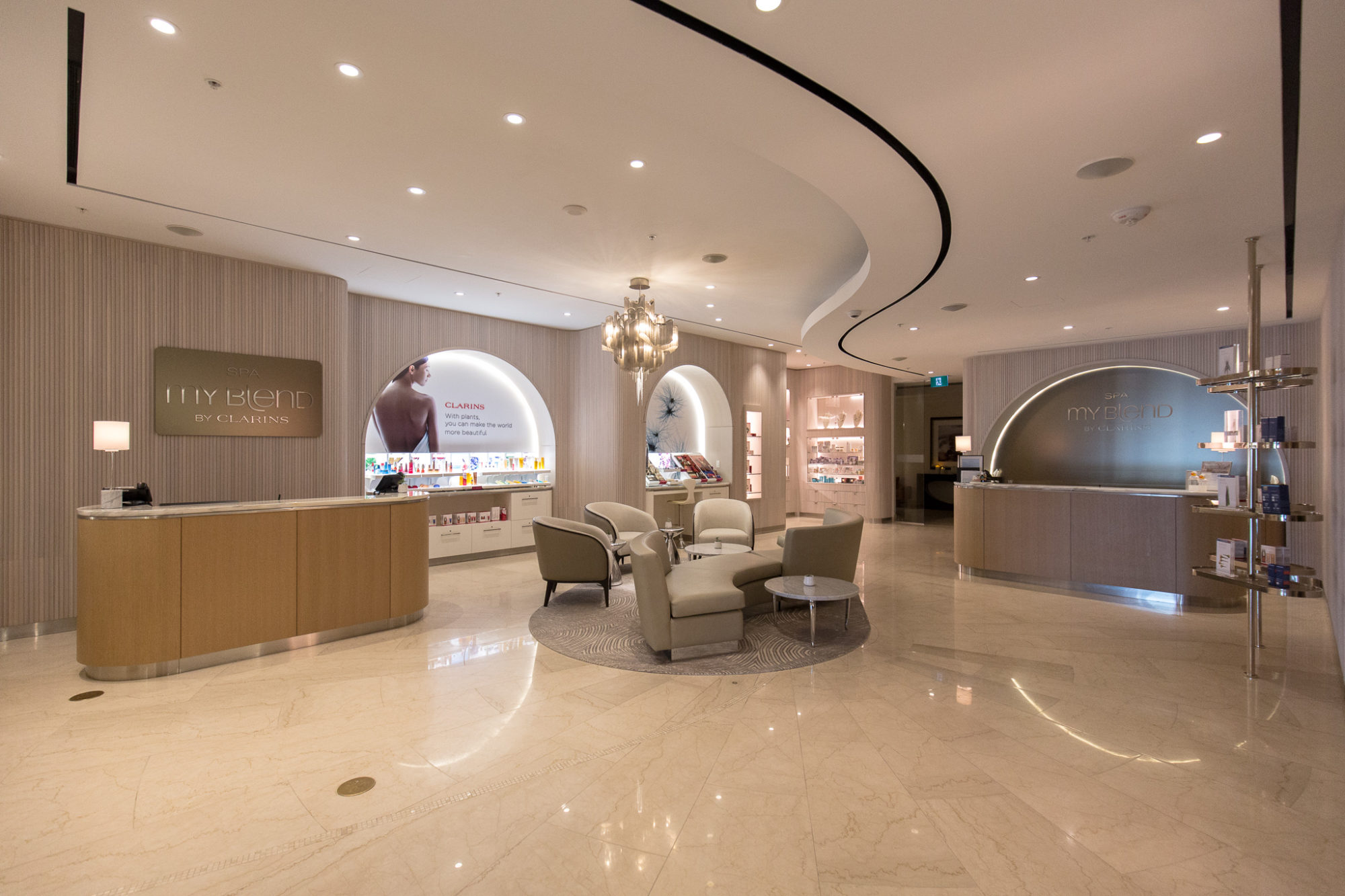