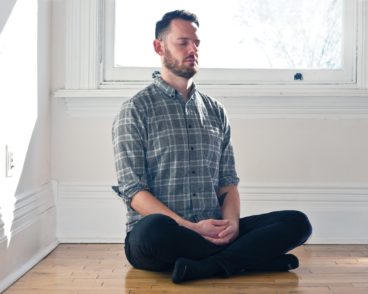 I went silent for 10 days. No interactions. No eye contact. It was physical and mental anguish. And I’ve never felt better

Ihave known I was gay for as long as I can remember. I grew up in Scarborough in a loving home, and my early childhood was filled with joy and wonder. That I was effeminate was fine up until I was about 10, when gender became a factor in defining social status. My male peers tormented me. I kept the abuse from my friends and family, buried the shame and tried to move on. When I was 26, a homophobic bully confronted me, and my trauma came roaring back to life. Therapy helped me understand how the bullying had stayed with me and shaped who I was, but I struggled when it came to dealing with its present-day ramifications. Then, one day, two close friends told me they had completed a retreat at the Ontario Vipassana Centre in Egbert, about an hour’s drive north of Toronto. It was a 10-day silent experience that required 10 hours of meditation a day. It sounded daunting, but they raved about it. So I signed up. And then I cancelled. I was nervous—about staring inward so intently, about confronting my fears, about being bored and sitting still for so long.

Finally, on a frigid day in February, I hopped on a GO bus north. As it turned out, the facility was an old Boy Scouts camp that I used to go to as a kid, in the woods just off County Road 56. There were four dormitories and two cafeterias, separated by gender, and a main meditation hall. Like the hundred or so other attendees, I handed over my possessions upon arrival: cellphone, wallet, book (no reading allowed), journal, pen and paper, snacks and drinks. I was given a room number and went to check it out: a spartan box, small and sparsely furnished with two single beds. I briefly had a roommate, but he soon fled and didn’t come back. After we’d unpacked, the teacher summoned the group to the main hall, where he explained the precepts: we were to abstain from killing any being (that is, no eating meat); sexual activity, including masturbation; lying; and consuming intoxicants. He went over the concept of “noble silence”—of the body, voice and mind—which means you cannot speak with other people, except for periodic quiet consultation with the teachers. We were to avoid contact with other people and excessive movements, all of which are distractions from the objective, which is the ­process of self-purification by self-­observation. He then went over the ­schedule: wake-up was at 4 a.m., bedtime at 9:30 p.m., and in between were 10 hours of meditation, short meals and optional solo walks in the woods. Part of me wanted to get up and run home through the woods, Revenant-style, to my Parkdale apartment. But soon, the speech had ended and the silence had begun.

On day two, I woke to the soft, sonorous sound of a gong and walked through the darkness to the meditation building. Inside were roughly 100 other students, men on one side, women on the other. I found a mat and chose the most comfortable position I could think of: cross-legged, hands on my knees. I was to focus solely on air from my nose passing over my upper lip. In, out. The exercise, a style of meditation called Anapana, is meant to sharpen awareness. In a world of constant ­stimulation—fidget spinners are a $500-­million ­industry—doing one thing is incredibly hard. Ten minutes in, my legs, hips and lower back throbbed. Go ahead and try it right now, for just 15 minutes. I swear it will feel like an eternity. We were expected to do it for two hours. As hard as I tried to empty my mind, I couldn’t. Vignettes of the weirdest stuff invaded my thoughts—long-ago friends, random snippets of my childhood. For some reason, I kept picturing my most macho friends dressed in drag, standing beside the teachers, trying to make me laugh. Multiple times, I had to cover my mouth with both hands to suppress a hysterical squeal.

Two hours later, the gong sounded, signalling breakfast. I was famished. In the cafeteria, we shuffled through the buffet line, moving slowly so as not to brush against anyone, staring at our plates to avoid eye contact.

After about eight hours of meditation, I had a breakthrough. Not only could I feel the cool air being pulled in and the warm air being expelled, but I could detect micro–air currents moving across my face and pinpoint every spot on my arms where hair protruded from the skin.

By day four, we had moved on to Vipassana, a practice that involves scanning your body from head to toe, millimetre by milli­metre. It’s a complicated exercise, but the idea is to note sensations without attaching any narrative, negative or positive. That might sound easy, but it’s not. Think of your most painful memory and try not to have any emotional reaction.

By day seven, my senses had become wildly heightened. I could feel the sound waves from someone else’s cough pass through my body. I could sense tiny eddies of air caused by my own body heat, hear the distant twittering of a bird outside. A single leaf of lettuce teemed with flavour, a thousand different tastes from one end to the other. It was as if my life had suddenly switched to HD. When I went outside, the forest crackled with beauty—alive, intense and wild. In the best of ways, I felt like a kid again.

It wasn’t all wonder and joy. I confronted what you might describe as physical and mental pain, and bizarre, uncomfortable thoughts buried deep in my unconscious. But each time I passed over them without reacting, they began to dissolve.

I started having difficulty falling asleep. That’s normal, it turns out, since the body is so rested from meditation that it doesn’t require much sleep. So, as instructed, I meditated. Eventually, my awareness became so focused that I was able to feel my organs, one by one, sensing each with the same tactile realness as rubbing my hands together. My diaphragm was taut, my brain a roiling storm of twitching jelly, my heart a powerful combustion engine slapping against the inside of my rib cage. Eventually, the negative thoughts and physical pain—I realized how inextricable the two are—subsided, and so too did much of my trauma.

Before we were dismissed, the instructor warned us about re-entry. Nothing would be the same, he said. But the super-sensitivity we had cultivated in the camp would wane. When I got home, I put on some music and then quickly turned it off. Music was a distraction. It stuck in my mind, impeding my ability to perceive the present moment clearly. Same with TV.

Outside of being bullied, my 10-day vow of silence was the most difficult thing I’ve ever experienced. It was also the most beneficial thing I’ve ever done. Today, I meditate often, and I find I’m able to be more present with other people—to focus on them, to empathize with their feelings and respond with kindness. I have a higher capacity for love. And I now possess an amazing self-help tool: if I sit down and meditate for an hour—something I do often—I can alleviate almost any imbalance or anxiety. I do it at work, at home, on the streetcar. I used to have panic attacks, but now my anxiety is all but gone. It’s been two years since my first visit to the centre. I’ve been back once since, for another 10-day stint, and I plan to go again this winter. Every time I go, I feel better. So why not?

A Skeptic’s Guide to Self-Care

Part 1: Golden Getaways
Spas for quieting the mind, calibrating the qi and pampering the body

Part 3: Superfoods That Don’t Suck
Twenty things that taste as good as they are

Part 4: Silent Meditation
What it’s like to go mute for 10 days: a memoir