Real Weddings: Inside a quirky ceremony at a Kensington bar

Real Weddings: Inside a quirky ceremony at a Kensington bar Michelle Bigold and Lavan Srinarayanadas are loyal Winnipeggers. When they first moved to Toronto (him in 2013, her in 2016), they had trouble bonding with the city. Cold Tea—the backyard patio in Kensington Market renowned for rowdy Sunday Fundays—was one of the first places where they felt at home. Bigold, who works in advertising, and Srinarayanadas, a doctor who works in consulting, got engaged on vacation in Greece and had little interest in throwing a traditional wedding. They joked that they wished they could get married at Cold Tea. “We just wanted a big party with good food and good music,” says Bigold. The idea snowballed from there: Cold Tea’s owners agreed to host the bash, and the couple started planning the low-key backyard celebration of their dreams.

On the day of the wedding, the couple got ready together and went straight to Cold Tea. Only a dozen or so of their closest family members (they didn’t have bridal parties) attended the ceremony. “The ceremony was kind of an afterthought, to be honest,” says Bigold: Cold Tea surprised the couple by adding custom graffiti in the backyard: After the ceremony, the couple took photos around the neighbourhood, like this one, where they’re pretending to browse for trinkets in a nearby vintage shop: It was a steamy day, so they stopped at Dirty Bird to grab some Ed’s Real Scoop ice cream. As they were posing for a shot on a bench, a lady sat down next to them, lit a cigarette and started chatting—not noticing that they were in wedding attire and she was ruining their photo. “It’s one of my favourite photos because it was so funny and weird,” says Srinarayanadas. “It was very Kensington”: The first time Srinarayanadas took Bigold to Cold Tea, cooks from Momofuku Daishō were barbecuing there. They ended up going to Daishō on a date later and loved the food. It was a no-brainer for their wedding-day dinner. They arrived early to help set up on the restaurant’s third floor: They kept the decor simple: “Momofuku’s glass wall is so beautiful on its own that we didn’t need to do anything,” says Bigold: The dinner was a series of family-style dishes. They made only two requests—seafood towers and brisket—and left the rest up to to the chef. “We trusted her to do what she does best,” says Srinarayanadas: After dinner and speeches, the couple bussed everyone back to Cold Tea for the reception. They didn’t have an official dress code but encouraged guests to go formal. “We thought it would be hilarious to go to Cold Tea in black tie,” says Bigold: For the dance party, Bigold changed out of her first gown, by Self-Portrait, into a shorter spaghetti-strap number by the same designer: Srinarayanadas’ family is Sri Lankan Tamil, and he told his aunts to wear their saris. “We loved the contrast of the colourful saris against the edgy Cold Tea background,” says Srinarayanadas: Their DJ played hits for the rest of the night (including his own mash-ups of hip-hop and Tamil music), and guests danced until the early hours of the morning. There was a late-night barbecue by Momofuku, and the couple gave out Milk Bar cookies as favours: 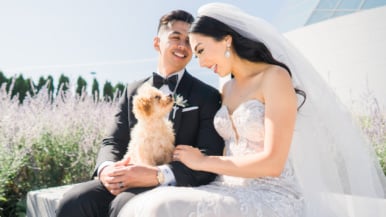