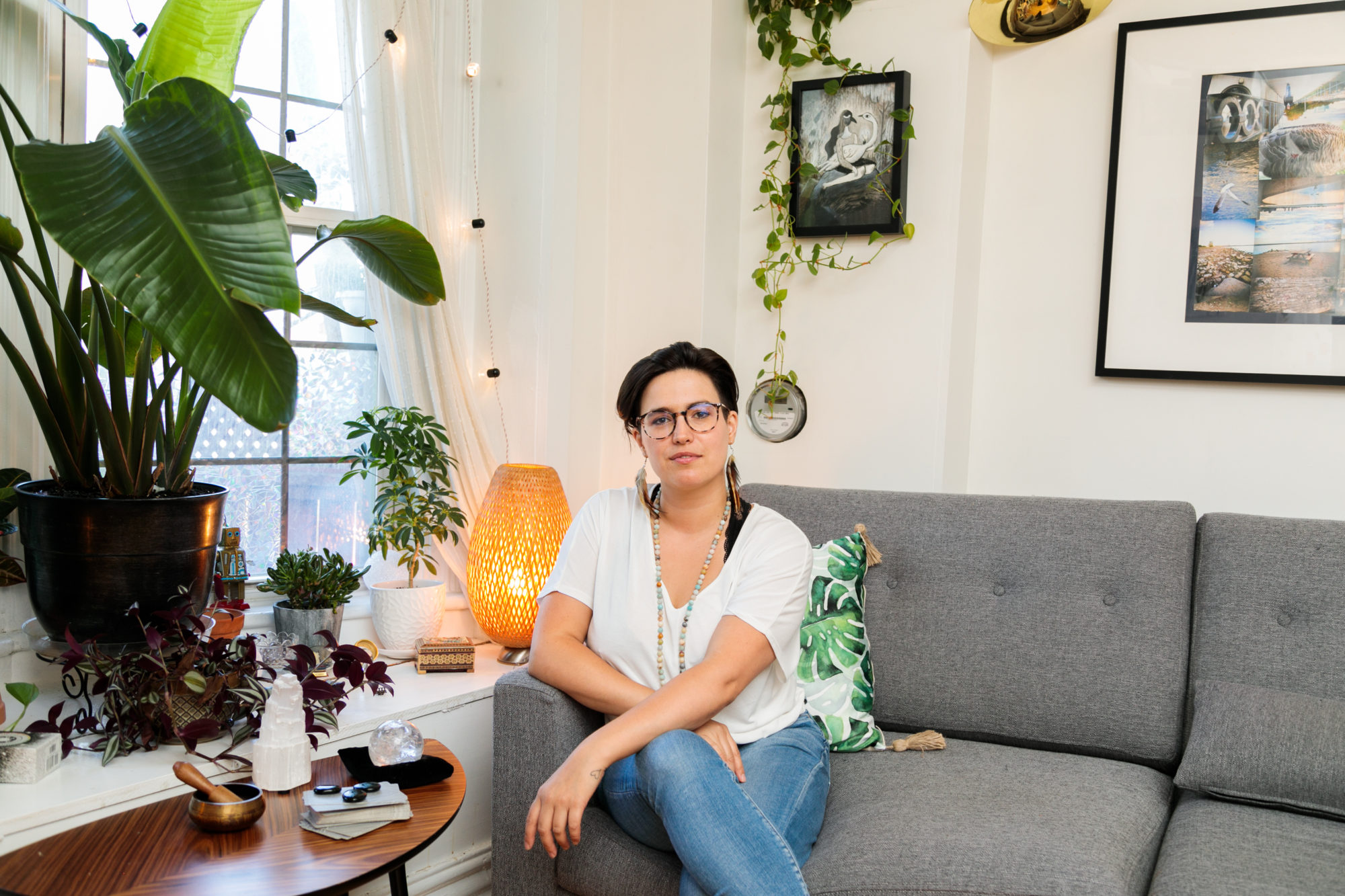 Diana had been sharing a house in Dufferin Grove with roommates, when, a year ago, they decided to move out. She opted to do the same, but she ended up leaving apartment hunting to the last minute. Like, very last minute: she found her current place, a one-bedroom on the second floor of an old Parkdale Victorian, on Craigslist on the 30th of the month, signed the lease on the 31st and started moving her stuff in on the very same day. Luckily, she ended up loving the apartment: she’s an avid gardener and knew that her plants would appreciate the massive bay window, and that the large deck would allow her to grow a lot of her own produce.

After she moved in, she spent a few months testing out different furniture arrangements. The place had quite a few awkward angles, but she managed to create nooks and corners that work perfectly for her lifestyle. She works mostly from home, so she made an office area out of the foyer. In another corner, she set up a meditation sanctuary, which has just enough space for a yoga mat. There was no space left over for a kitchen table, but she finds she’s able to dine al fresco at her outdoor table nearly six months of the year.

Diana plays the cello and loves that she has a peaceful corner for practice, as well as meditation. She calls it the “atrium.” A tapestry fills the space with psychedelic imagery. “It makes me feel like I’m already dreaming,” she says: 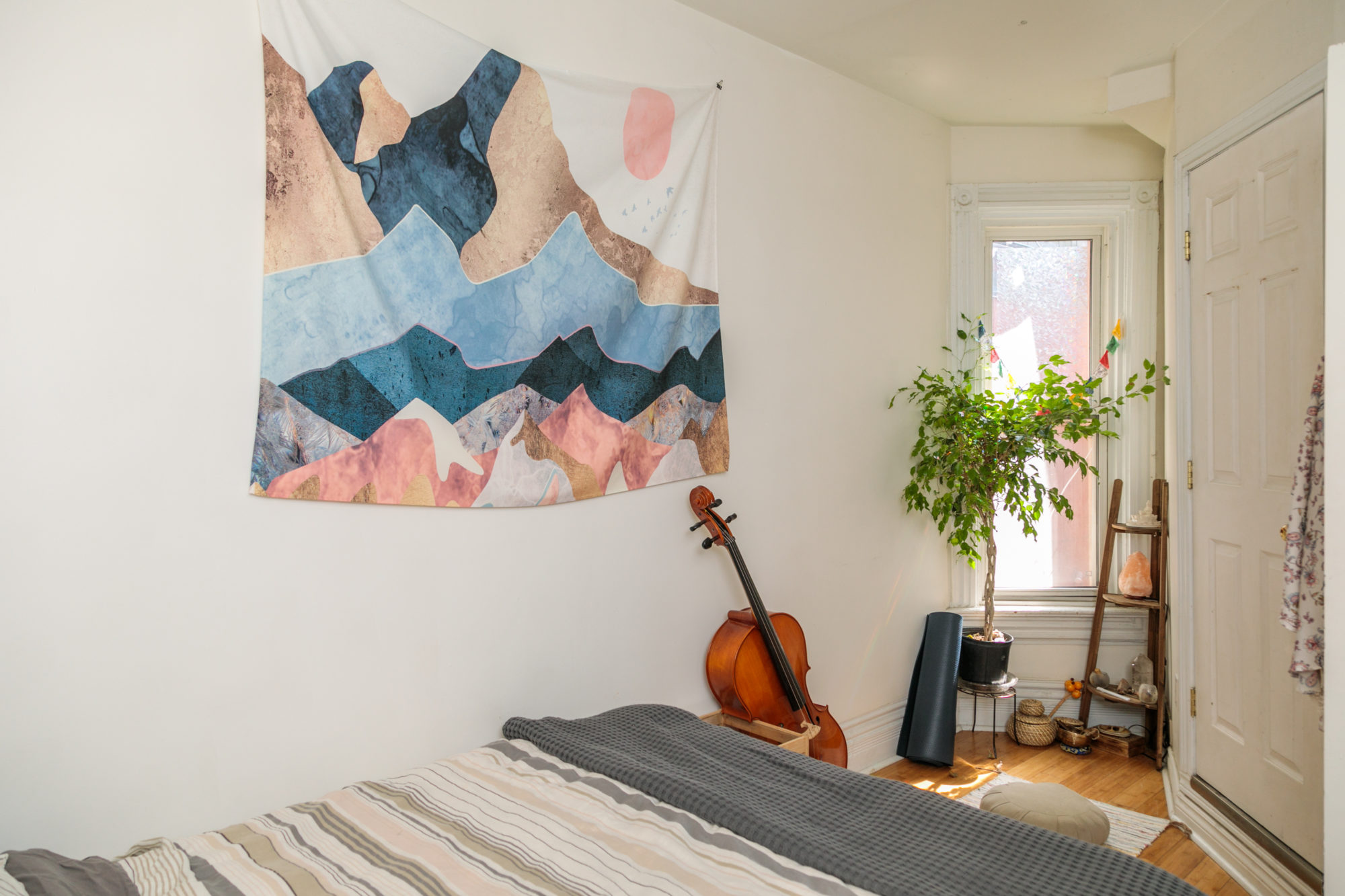 She made an office out of a nook near the front door. Much of the storage in the apartment is vertical, and she finds she can’t live without her stepladder. The cat’s name is Jones: 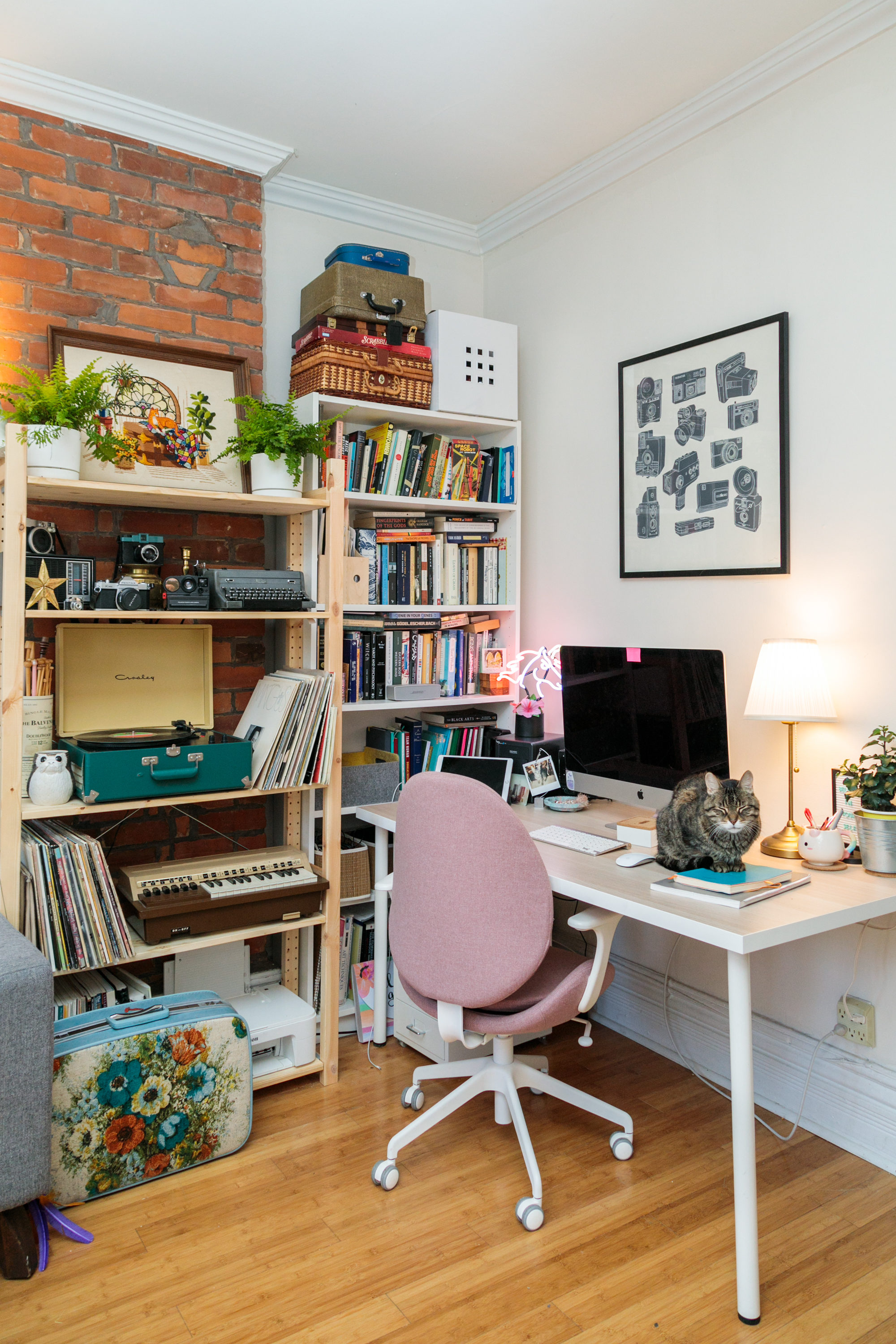 The living room is tiny, so some of the furniture encroaches on the kitchen space. There’s no room for a kitchen table, but her plants get plenty of light from the large east-facing window. She filled the space with crystals, incense and “sound bath” accessories. “It’s important to me to keep the energy clean and bright,” she says. 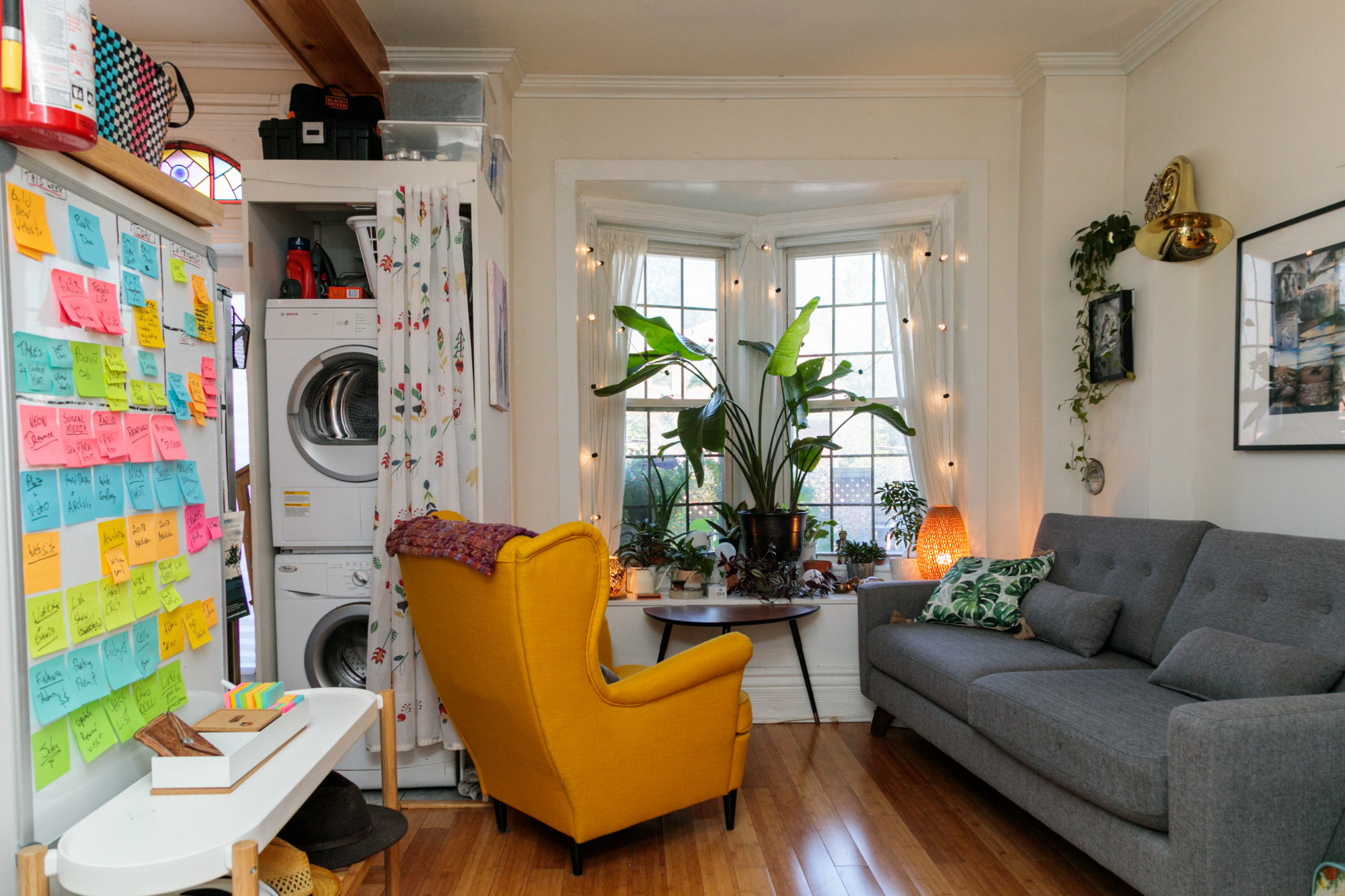 Here’s the kitchen. Diana loves that she’s able to have a full-size washer and dryer. She hides them behind a shower curtain. There’s not room for much else. “I once received a crock pot as a gift and I had to return it,” she says. “It took up my entire kitchen”: 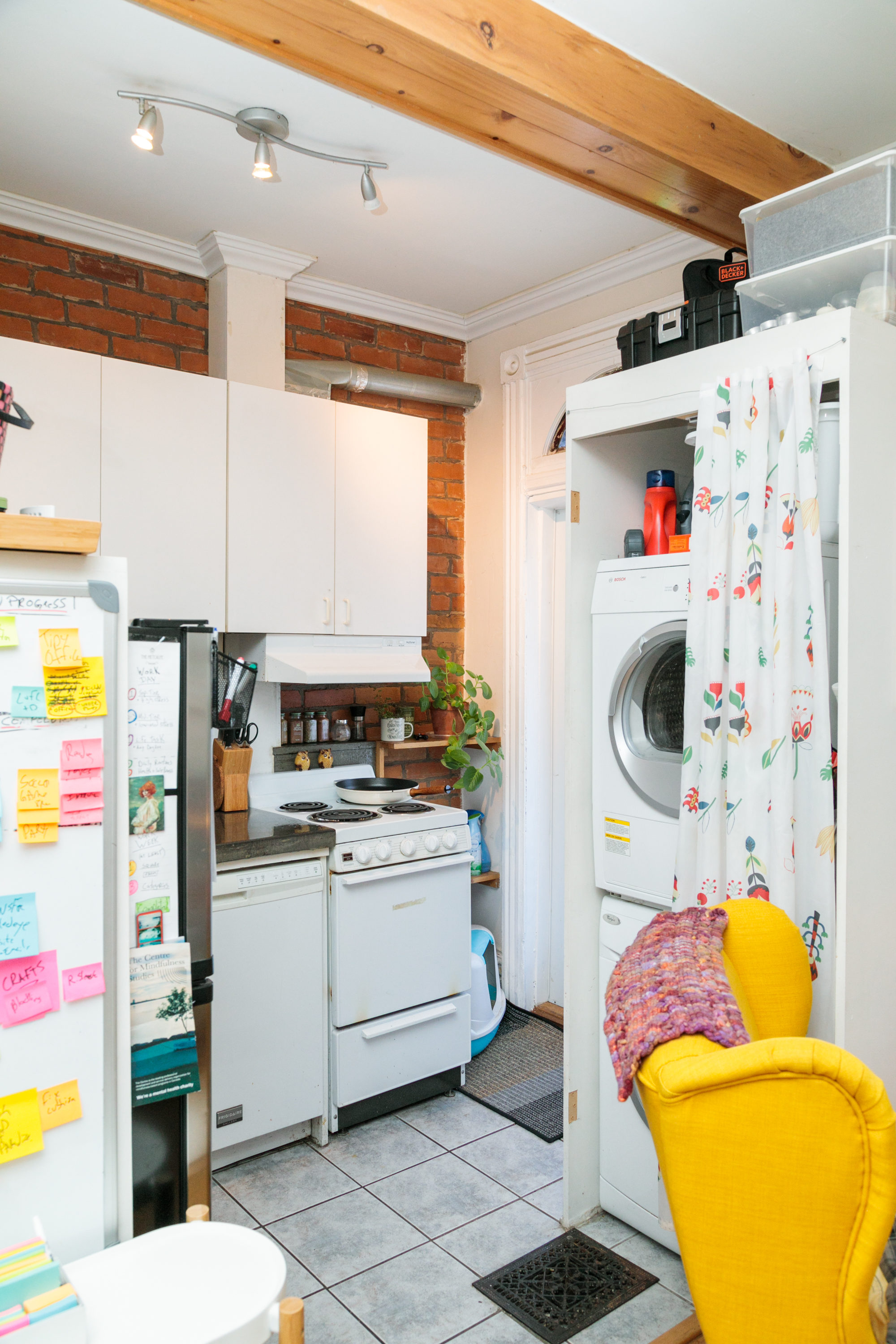 This piece is by Toronto illustrator Juliana Neufeld. Diana was drawn to it because she saw herself in the images. “It’s like she drew some secret corner of my subconscious,” she says: 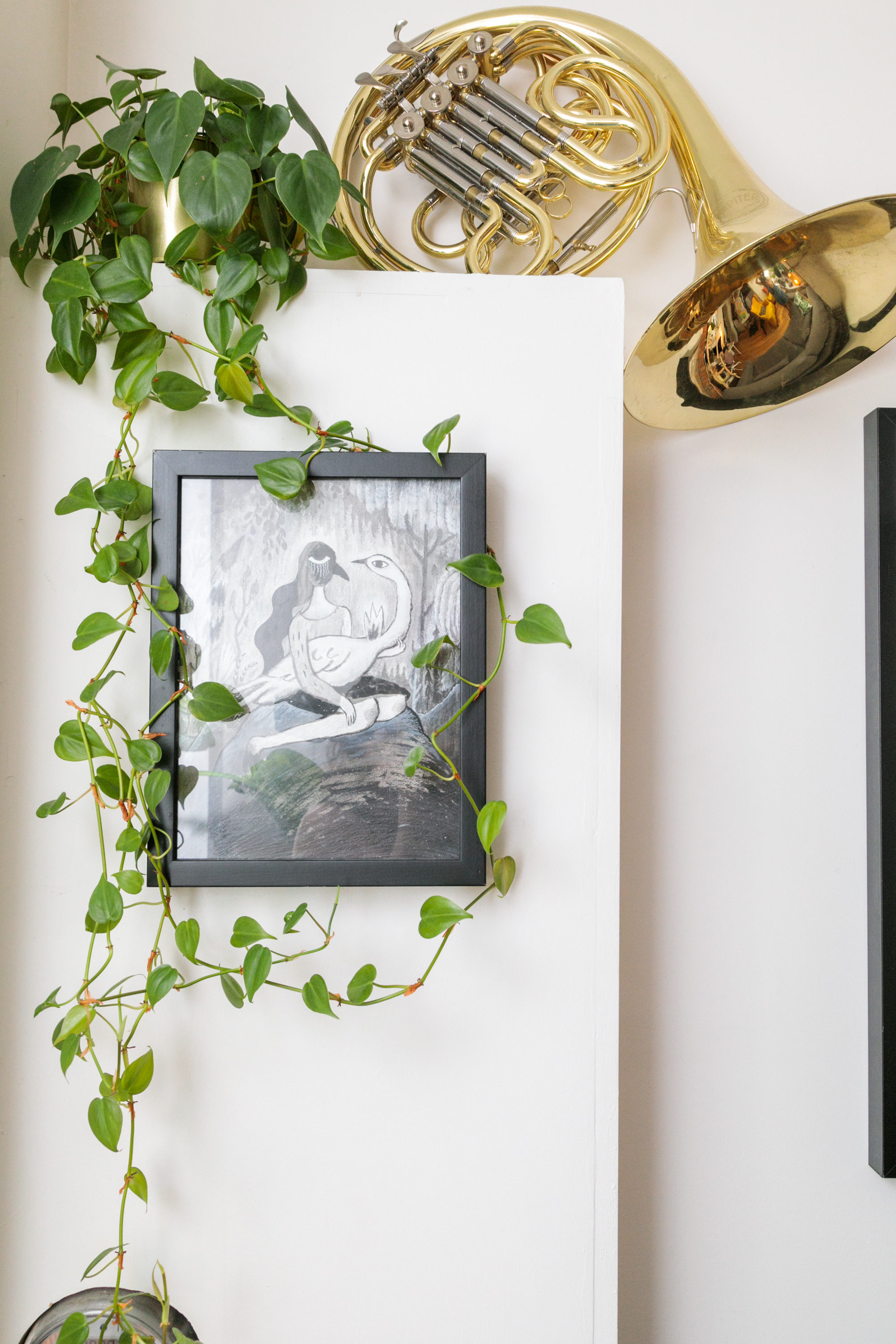 The deck adds quite a bit of square footage to the apartment in the warmer months. Diana grows all kinds of veggies, including tomatoes, cucumbers, hot peppers, eggplant, snow peas and herbs. “Since I moved to the city, no matter how small my space or patio is, I always try to grow vegetables,” she says. “Sometimes I’m out there tending to plants in the middle of the night like a kooky old European lady.” 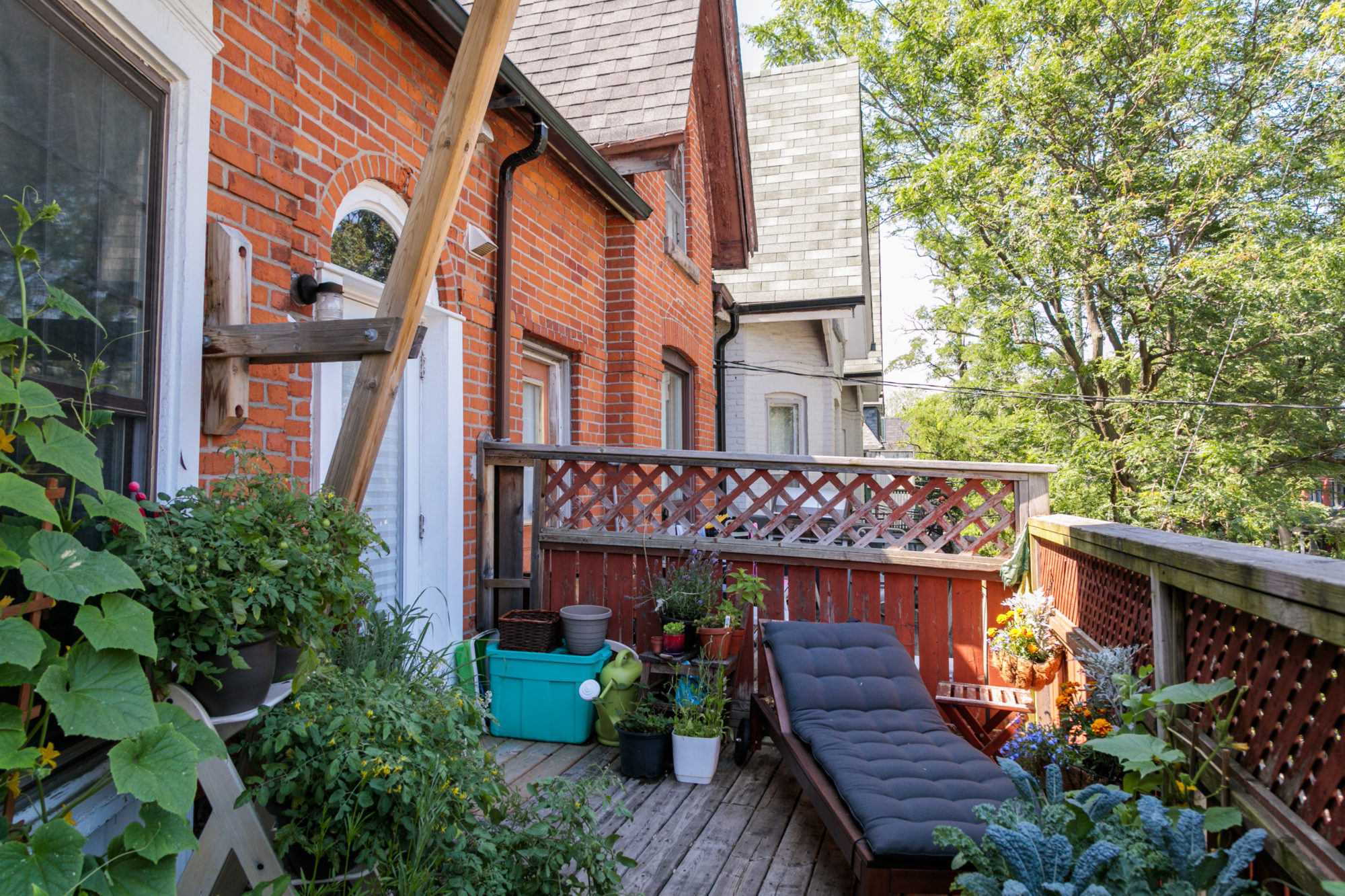