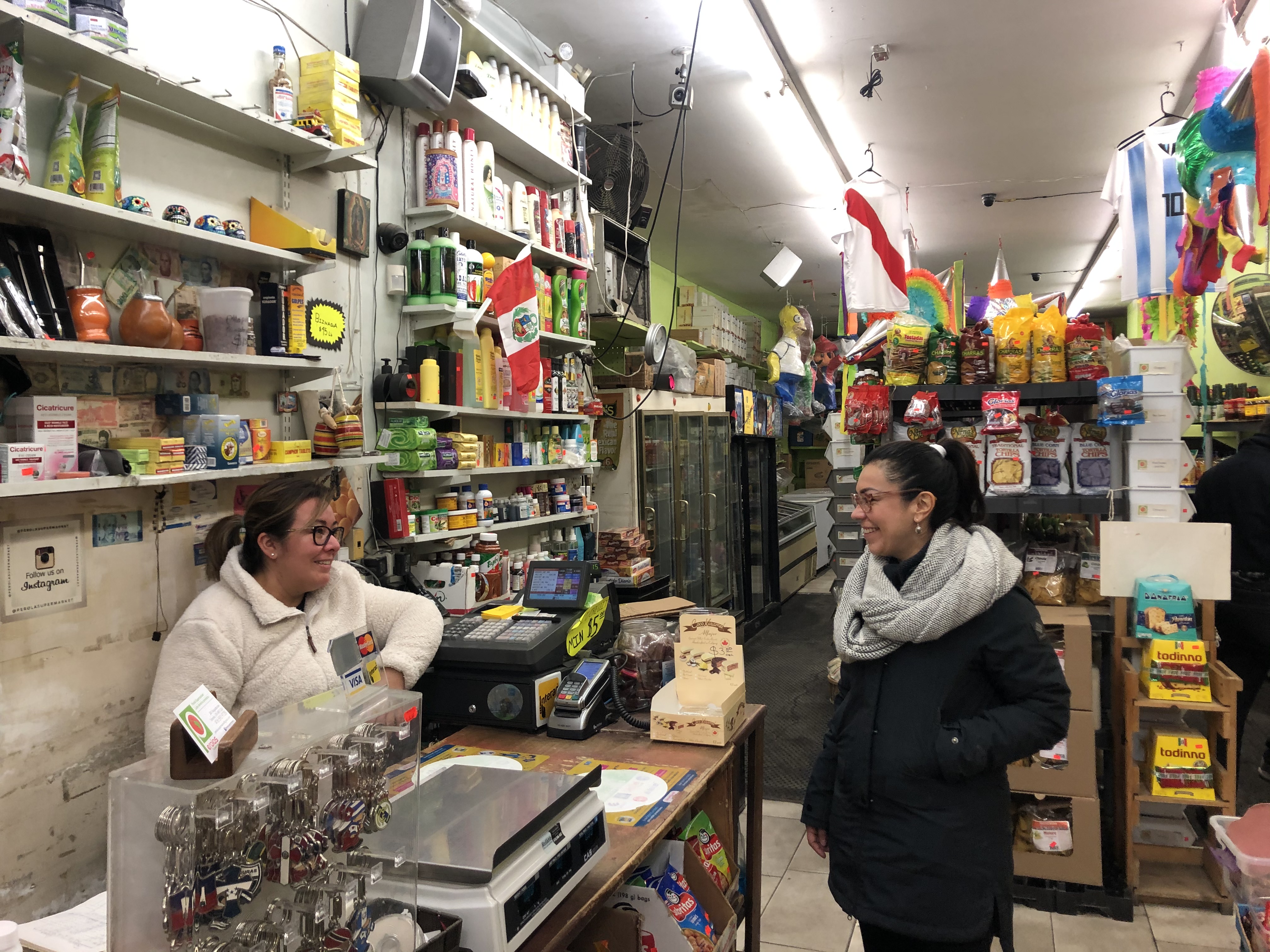 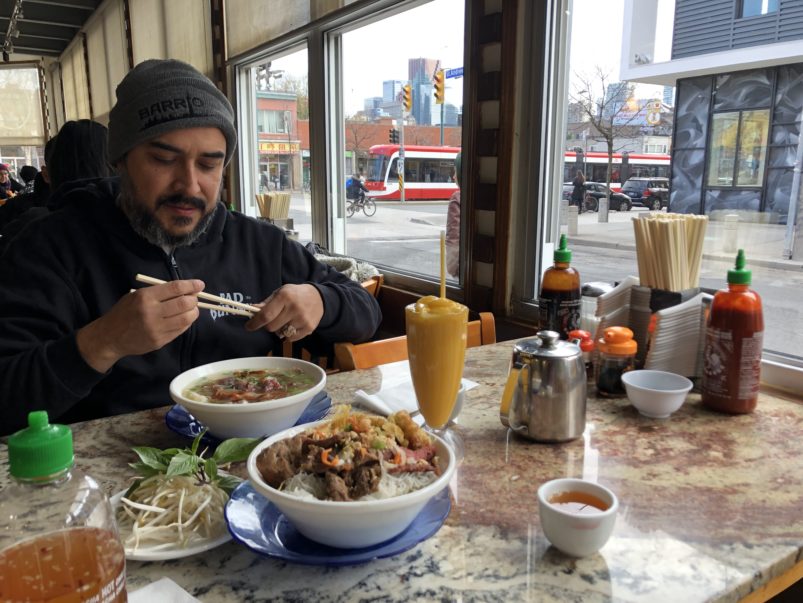 Colibri chef and owner Elia Herrera is now plying people with plant-based plates at her newest eatery LosCo, also inside Assembly Chef’s Hall. At her newest counter, Herrera serves Mexican breakfast and lunch favourites, like enchiladas and burritos—but it’s all entirely vegan. “About six months before we closed Los Colibris, I started to get more and more requests for vegan dishes, and I felt bad that I didn’t really have anything to offer. So I began creating a vegan special each week. They were crazy popular,” says Herrera. “I learned that it really isn’t difficult to make Mexican dishes vegan. Even if you have to eliminate the protein, it’s all about the sauces—they’re complex and so incredibly flavourful that you don’t miss the meat.” So when she was offered a space at Assembly Chefs Hall, she decided to take it rather than renew the lease on her King West restaurant. “With the increased property tax and decrease in traffic due to the King Street Pilot program, it just became unaffordable—it would have been crazy to stay.”

When she isn’t busy cooking for other people, Herrera will visit Kensington Market to feed herself. “I love it here for the liveliness, the community, and the chance to connect to my Latin roots. A perfect day for me is wandering the market’s streets on a Sunday, enjoying the live music, shopping for groceries, and grabbing a few bites at my favourite eateries.” 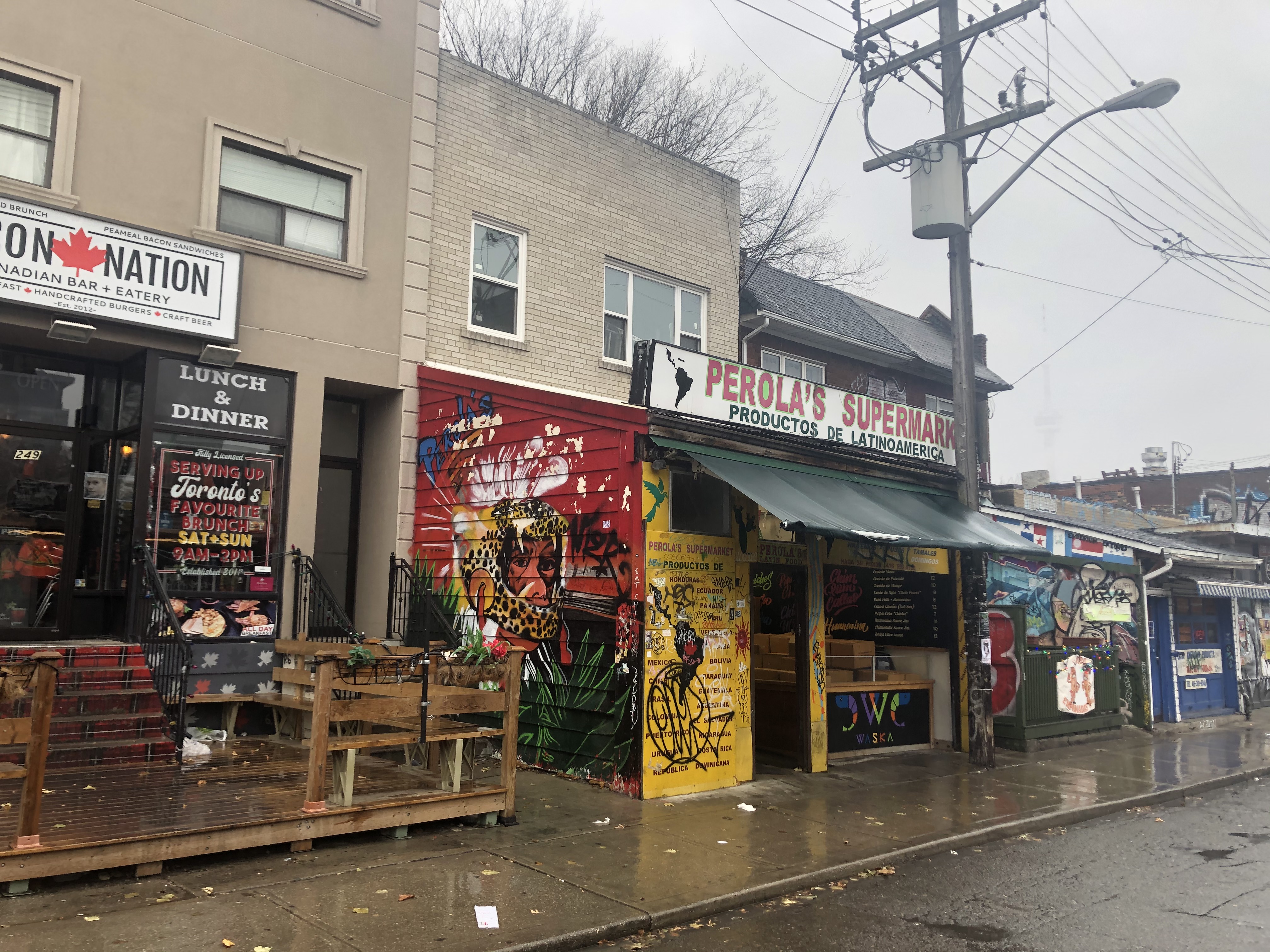 This family-owned grocer has been supplying the neighbourhood with hard-to-find Latin American products for 50 years. “I cook Mexican dishes both at work and at home, so I frequently come here to stock up on ingredients. In fact, they were my very first supplier when I started out in the restaurant business.”

Go-to item 1: Panela cheese.
Tasting notes: “I sprinkle it over tostadas or stuff it into poblano peppers.” 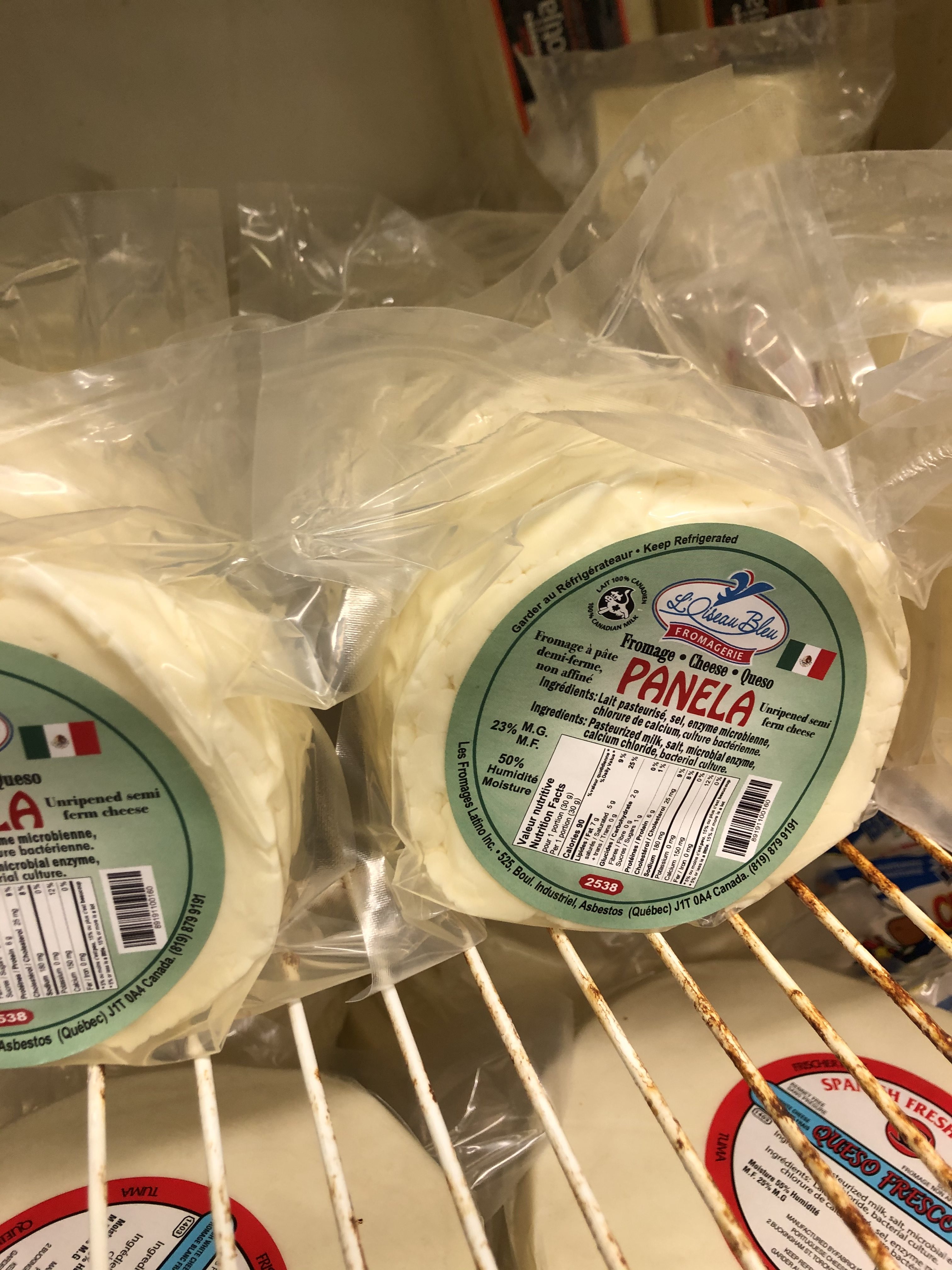 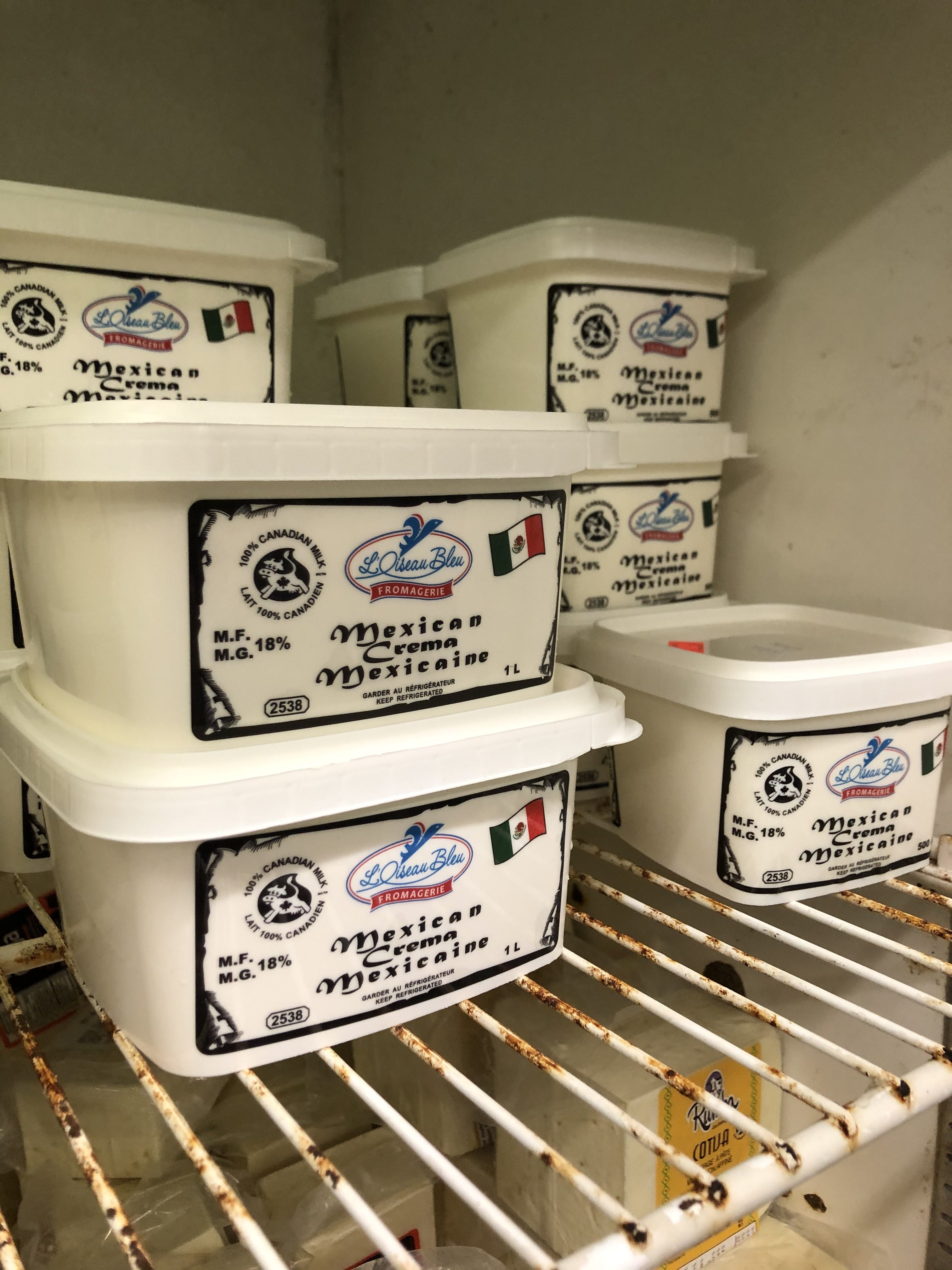 Go-to item 3: Chicharron.
Tasting notes: “You can eat them as they are for a snack, but I like to stuff them inside quesadillas and empanadas, or crush them slightly and sprinkle them on top of dishes for a crunchy finish.” 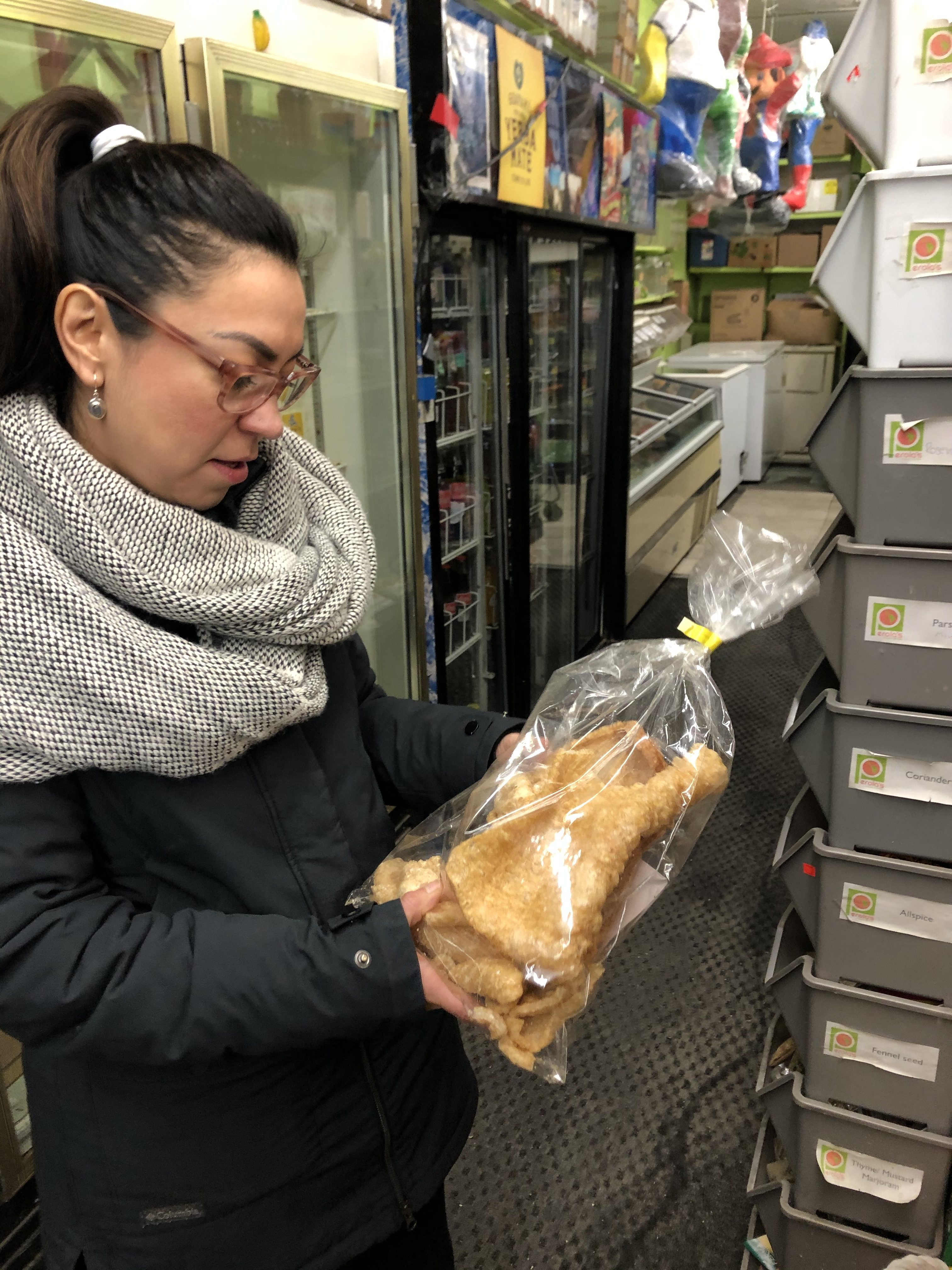 Go-to item 4: Rancheritos.
Tasting notes: “I was born and raised in Veracruz—I didn’t move to Toronto until 2003. Every time I eat these chips, they transport me back to Mexico. They remind me of my childhood. They’re so delicious and addictive.” 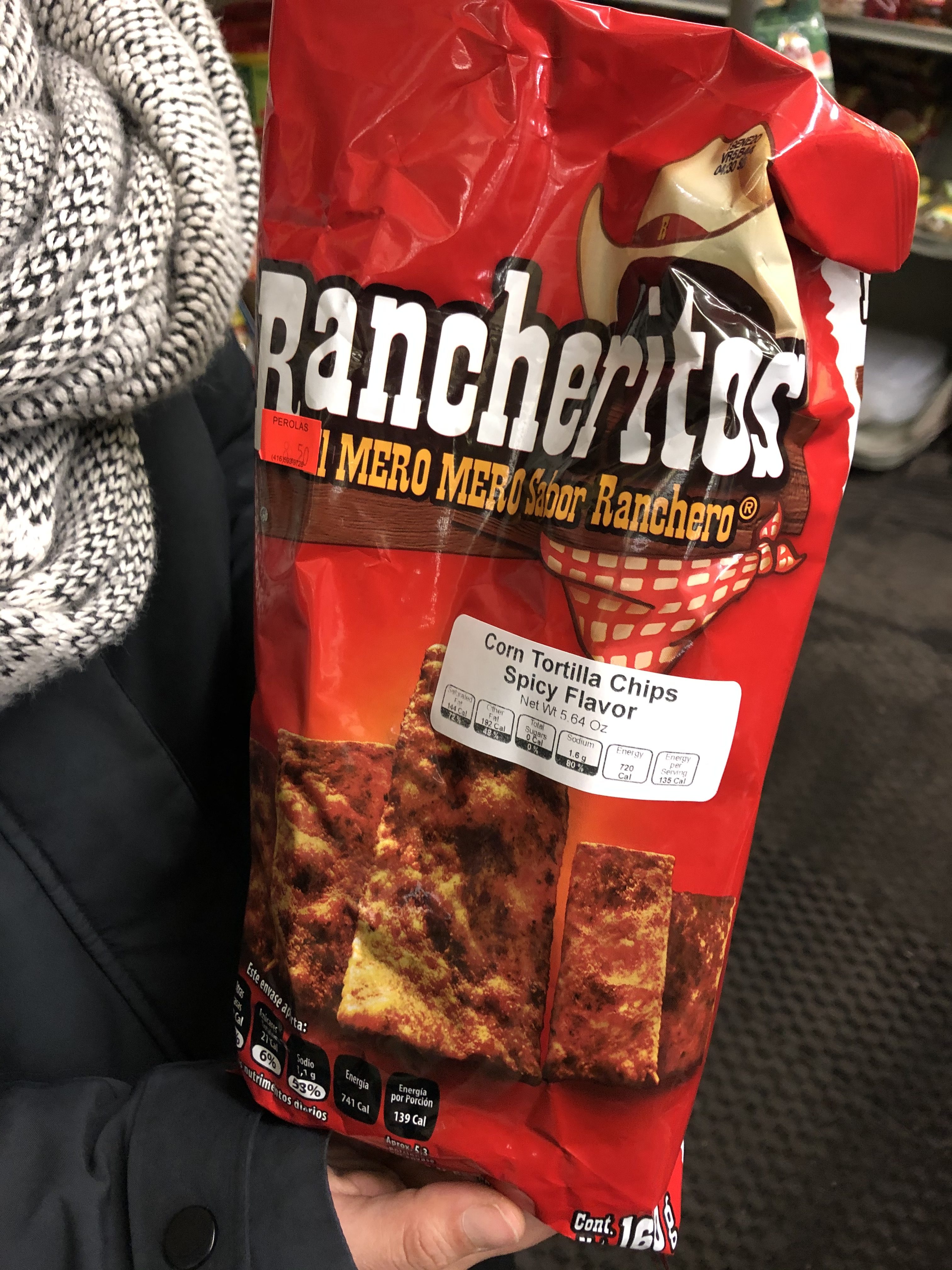 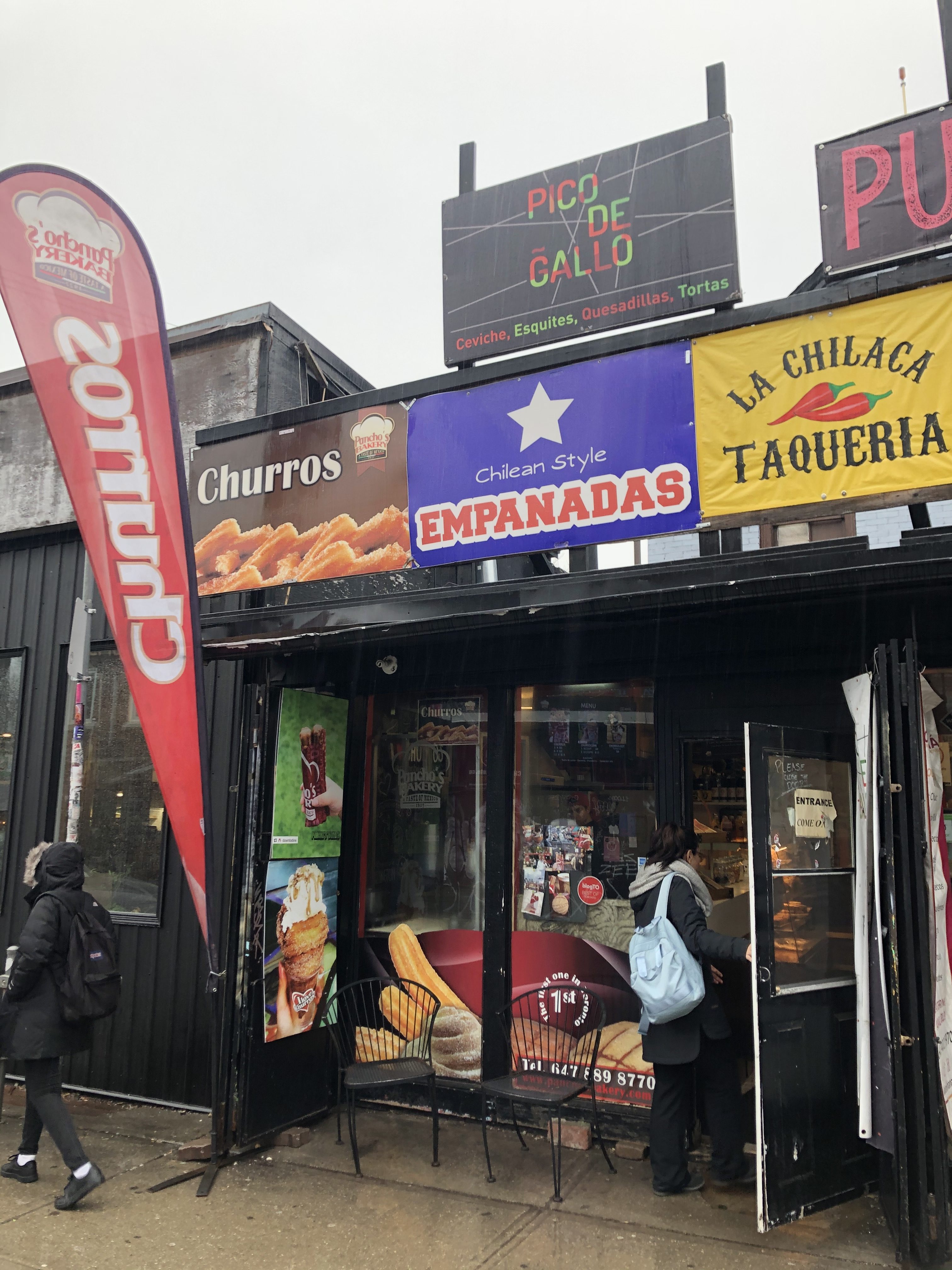 Pancho’s is a Mexican bakery with two locations, both started and owned by husband and wife Adalberto and Violeta Correa. It was the aroma wafting out of Pancho’s that first drew Herrera there. “I used to live near the Dufferin and Bloor location. Because it’s right next to the subway entrance, I’d always walk by and smell the sweet cinnamon-sugar and fried dough in the air. So whenever I’m in Kensington, I stop in and order a few churros as a treat.”

Go-to item 1: Churros filled with dulce de leche.
Tasting notes: Aaron, one of the staff at Pancho’s, explains that the churros are always made fresh daily. They’re made from flour and oil, pumped out of an extruder for their hallmark shape, deep-fried at 375°F for 3 to 4 minutes and then tossed in a mixture of granulated sugar and Mexican cinnamon. “Mexican cinnamon is the best because it’s sweeter. Although you can eat these plain with just the sugar and cinnamon, I highly recommend asking for one of their house-made sauces. They have chocolate, strawberry, and condensed milk, but my go-to is dulce de leche. It’s a classic, and you can never go wrong with a classic.” 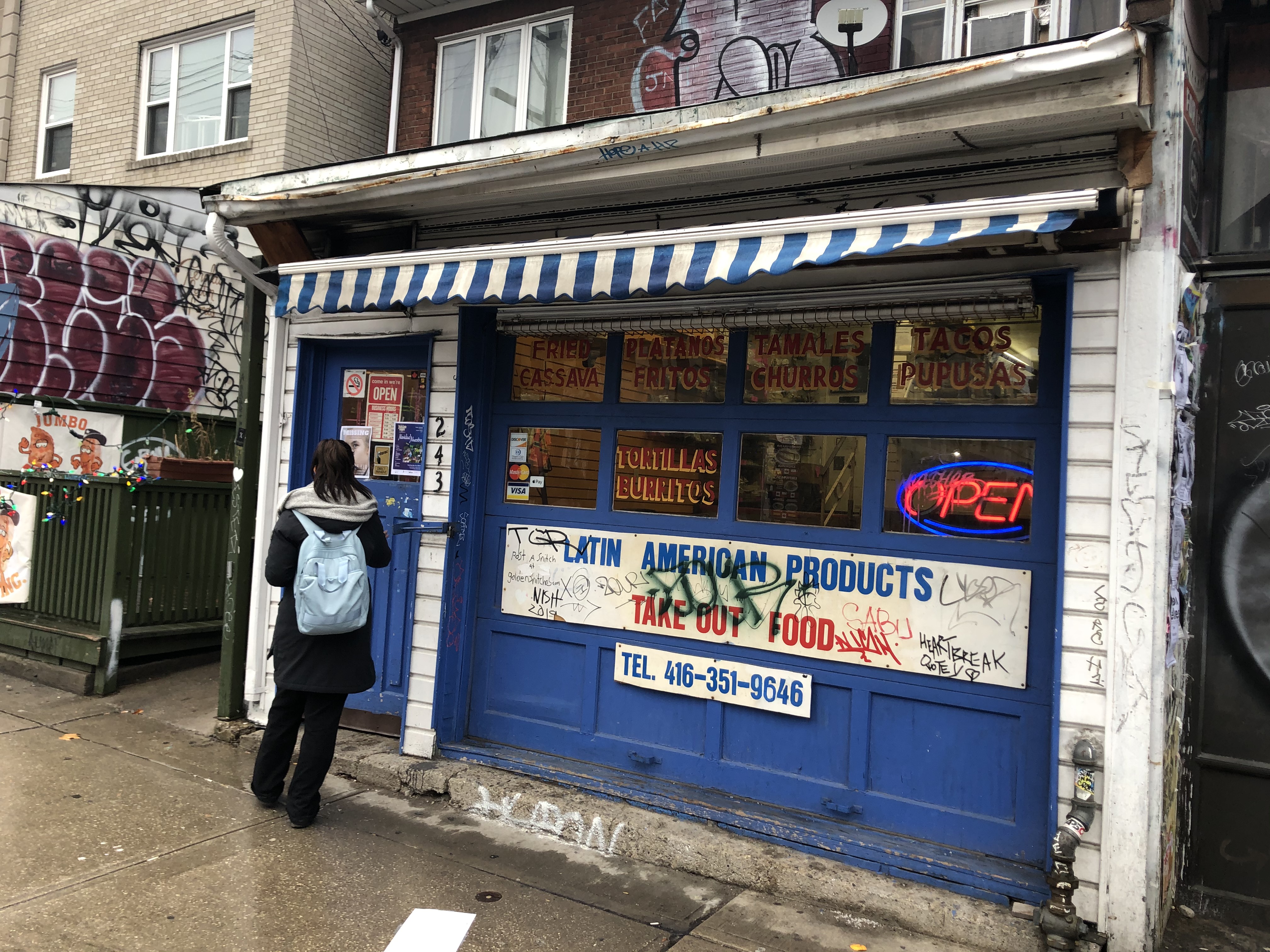 “This is one of my favourite Sunday brunch spots,” says Herrera. Cecilia Espinoza has owned this Kensington Market staple for nearly 30 years. “Initially we were a grocery store, but over time we added a takeaway service and then a spot to sit-down and enjoy our dishes. We offer Salvadoran and Mexican specialties here. I’d say our pupusas, tamales, and plantains are some of the most popular items.” Everything is made from scratch at the Latin American Emporium. “Nothing comes out of a can,” says Espinoza.

Go-to item 1: Pupusa.
Tasting notes: “This is the national dish of El Salvador, and they make it wonderfully here. It’s like a big masa ball that’s flattened slightly and stuffed with chicharrones, refried beans and lots of cheese. Then they panfry it and top it with cabbage, salsa verde and salsa roja. It’s the combination of flavours and textures that make it so delicious, and it’s very filling, too,” says Herrera. 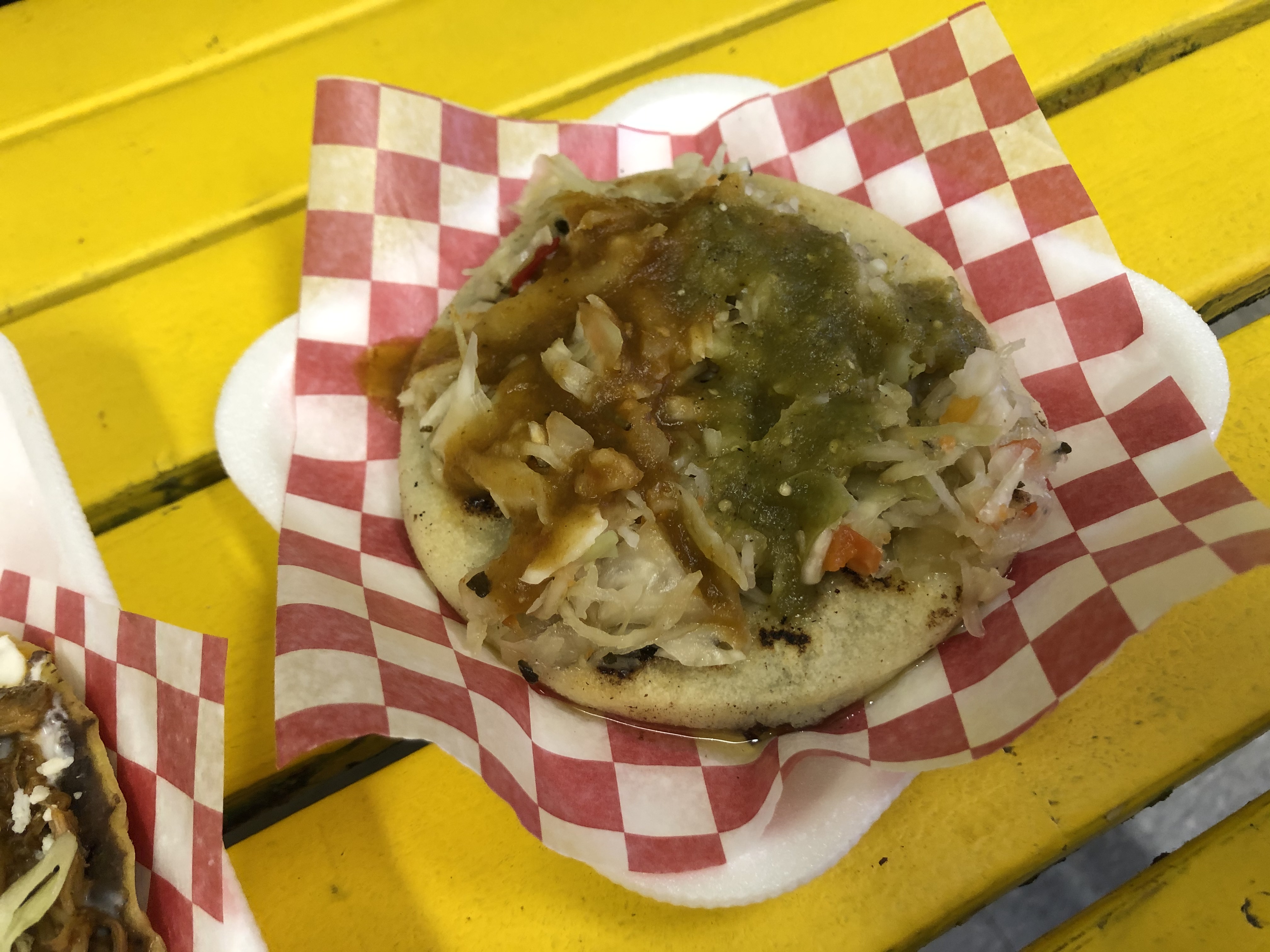 Go-to item 2: Chicken taco.
Tasting notes: To make this dish they boil a whole chicken in broth filled with aromatics. Then they remove it, shred the meat and add sautéed onion, garlic, black pepper, cumin and salt. The last (but not least) step: they reserve a little bit of the broth, reduce it and add that to the chicken to keep it super moist. The tacos are topped with salsa verde, pico de gallo, and chili verde. 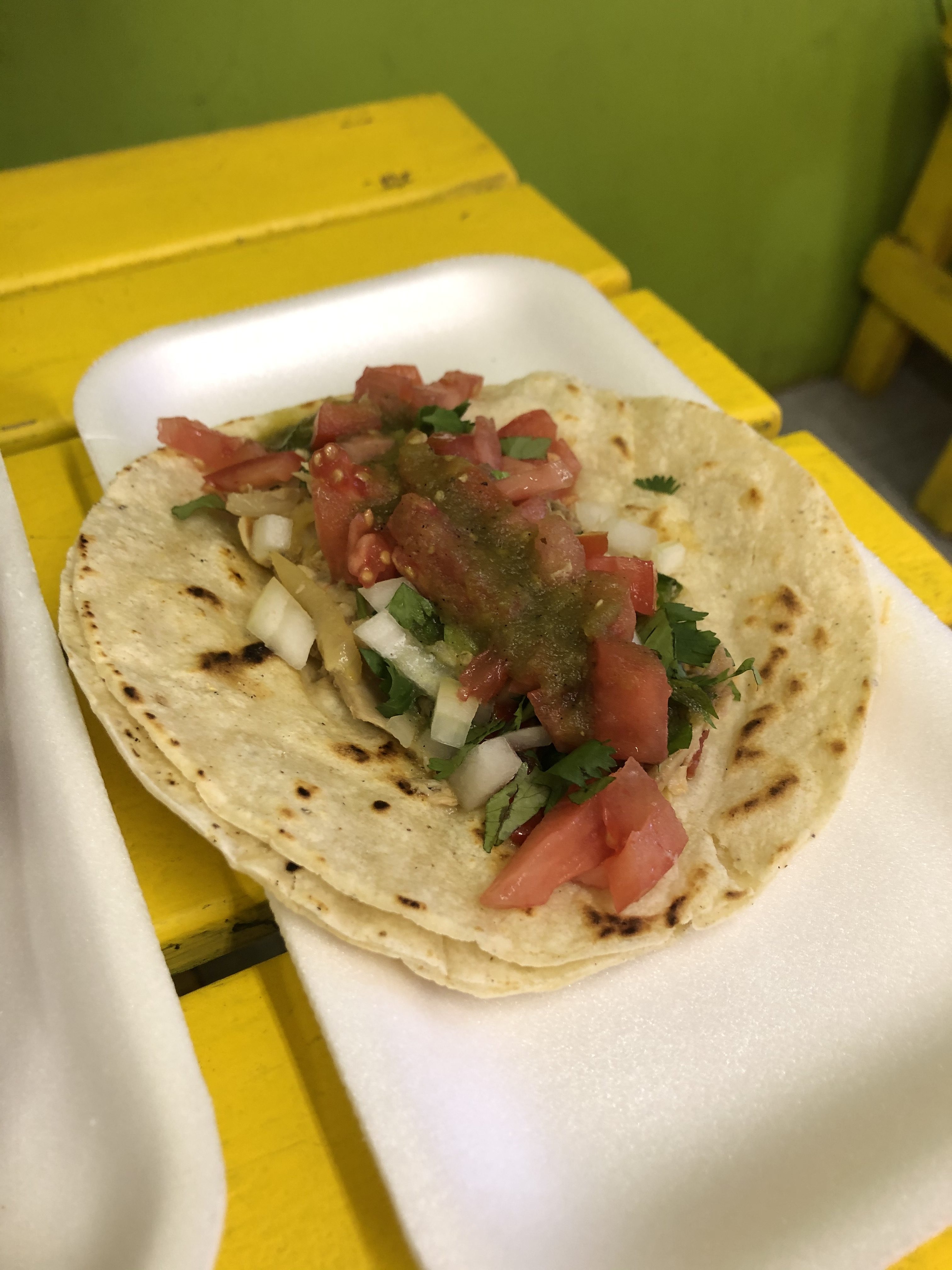 Go-to item 3: Pork tostada.
Tasting notes: A deep-fried corn tortilla is slathered with refried beans, topped with hunks of slow-roasted pork, and finished with crema and cotija cheese. “It can be a messy dish but I love it and these Latin flavours,” says Herrera. 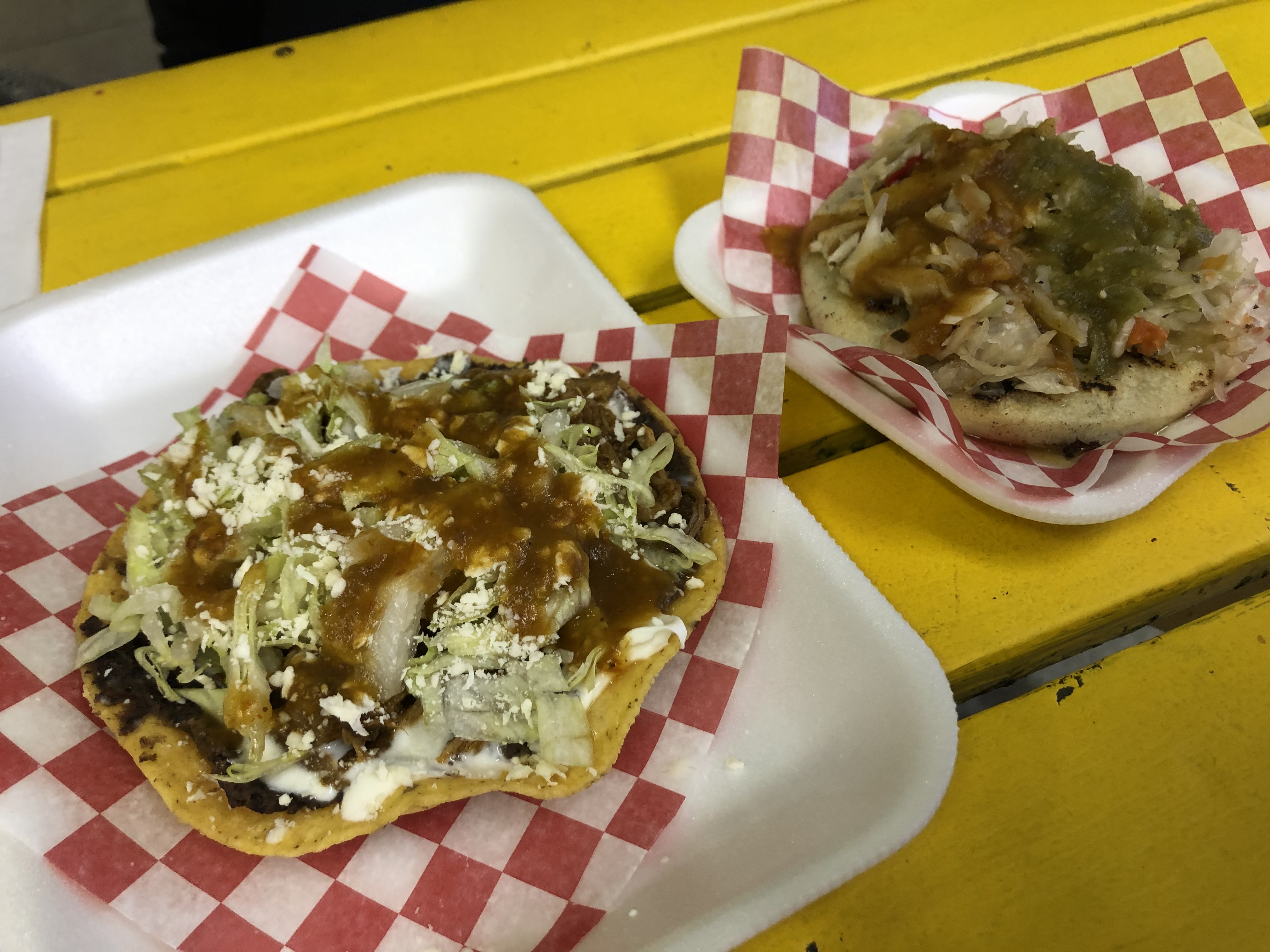 Go-to item 4: Fried plantain with crema.
Tasting notes: “For us, this is dessert. You just have to make sure that you’re using very ripe plantain, because that’s when the fruit will be at its sweetest and most tender,” says Herrera. To prepare the dish, Espinoza cuts the plantain in half and deep-fries it. When it’s golden-brown and caramelized, she takes it out, cools it and tops it with crema. 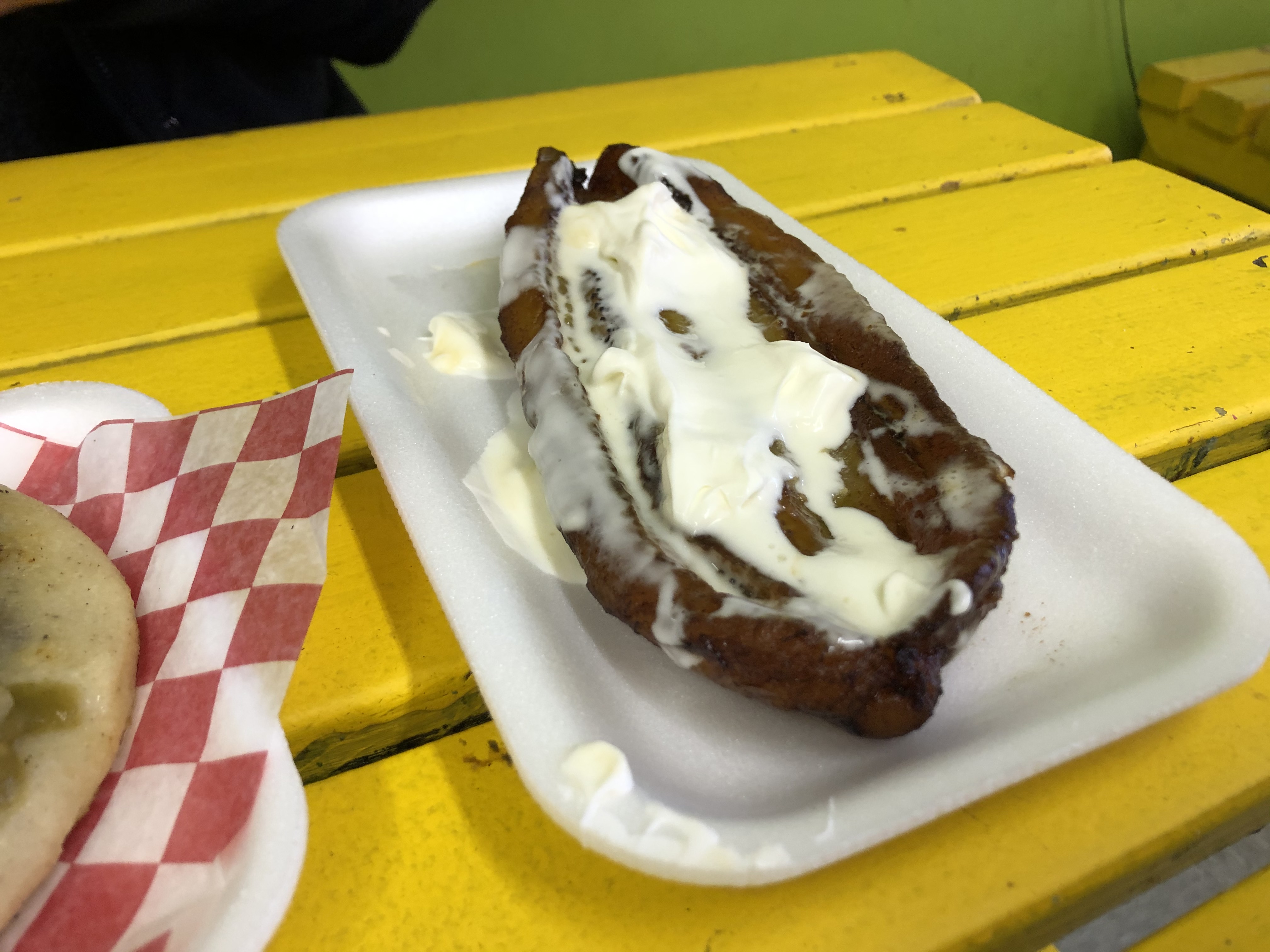 Go-to item 5: Horchata
Tasting notes: For this drink, rice is soaked overnight with cinnamon and water. In the morning, it’s blended and strained. Before serving the drink, the kitchen adds condensed milk and ice. “I can enjoy this any time of the year,” says Herrera. “The horchata here is so good—it has the perfect amount of sweetness, and I love how creamy it is.” 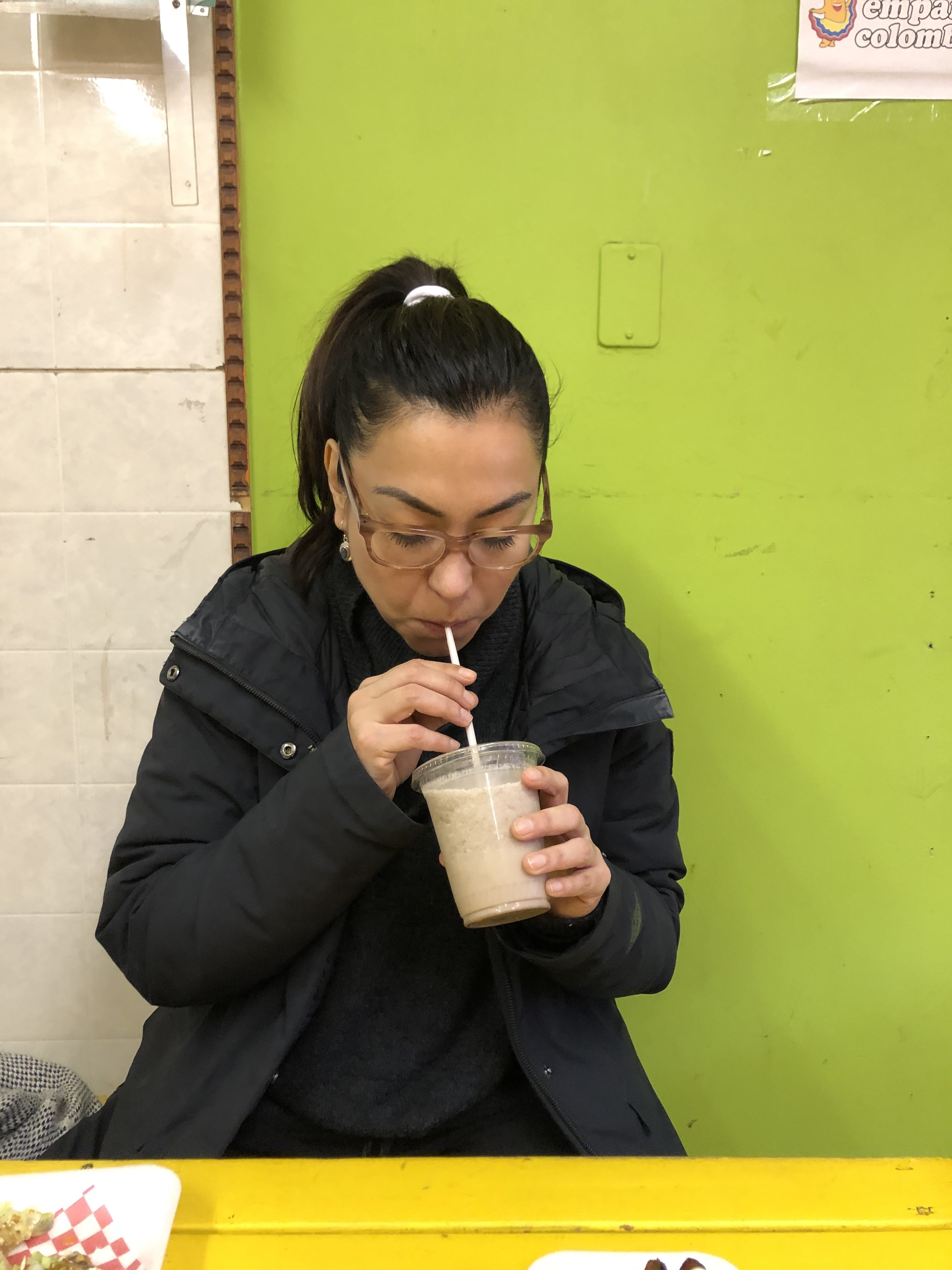 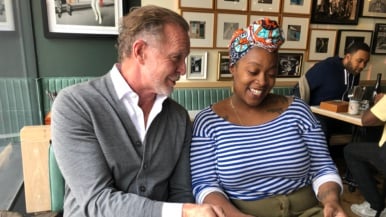 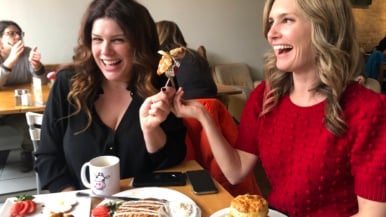