In August’s delivery: an all-platinum lineup from Marynissen Estates Winery that includes a cabernet franc, a chardonnay and a cabernet sauvignon. Orders must be placed by August 19. 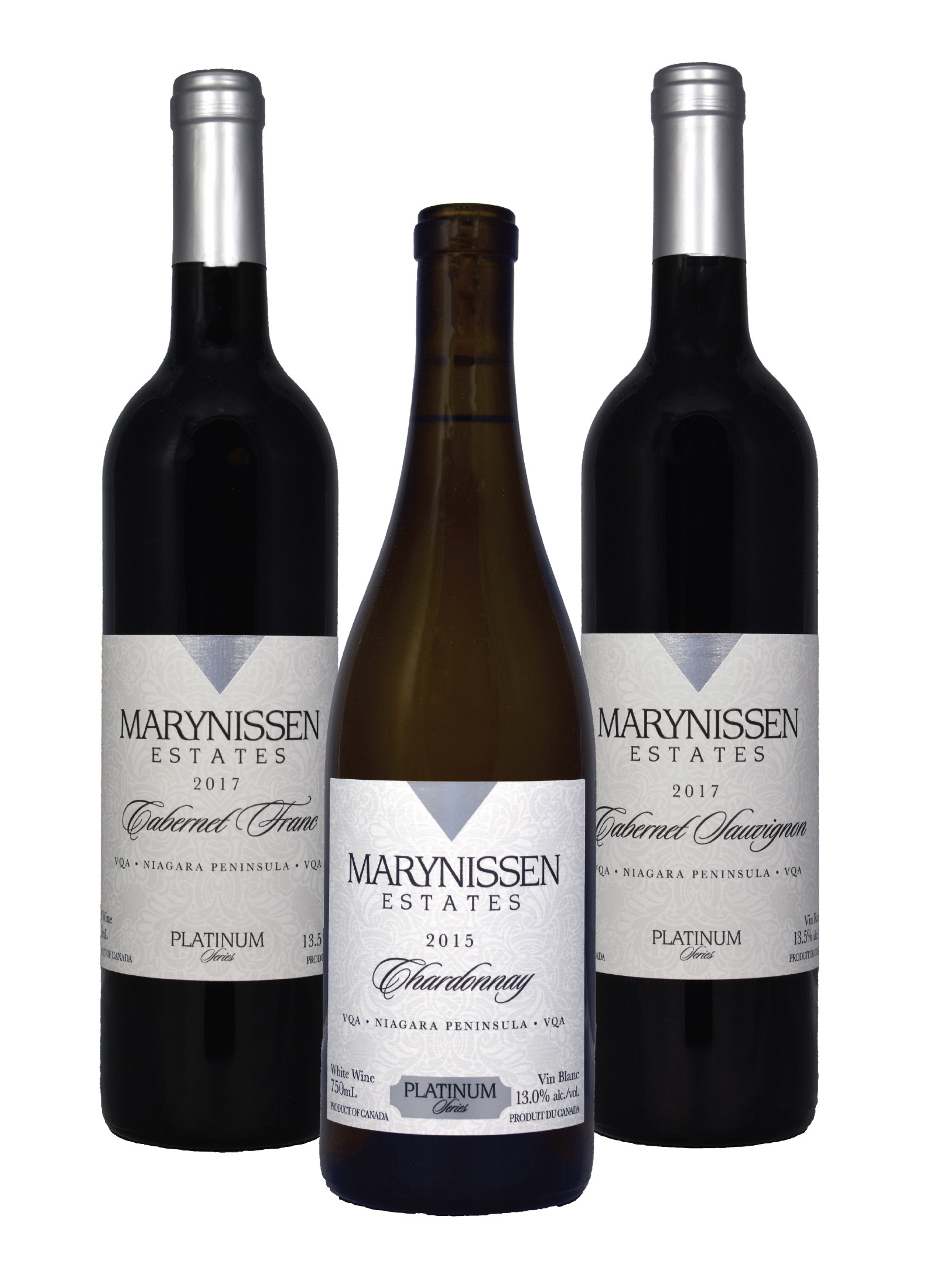 Why we’re into this wine: It’s a seamless, beautifully integrated blend of mostly chardonnay with a bit of chardonnay musque. Oak spice is deeply woven into this wine from the 18 months it spent in French, American and Hungarian barrels, but its richness is balanced out nicely by the musque. This is an exciting chardonnay with ample body and a round mouthfeel.

What it tastes like: Notes of buttered popcorn, caramel apple, and sea salt with a limestone undercurrent carry through on the nose and palate. The flavours are bold, yet balanced.

How to drink it: With grilled chicken and lemon pepper or with salty snacks and a good movie.

Why we’re into this wine: The grapes were lightly crushed before fermenting on their skins for 28 days before pressing, a process that encourages bold flavour and deep colour. The wine itself was aged for 18 months in oak barrels selected to impart specific aromatics, which contribute greatly to the wine’s solid structure.

What it tastes like: On the nose: fig, eucalyptus, herbs and cassis. On the palate: abundant black fruit, as well as earthy notes and black pepper. The tannins are ample but balanced with enduring structure.

How to drink it: This is a wine that you can age, and cellaring it for two to three years will only enhance its complexity. If you drink it now, however, be sure to decant it before pairing with hard cheeses, wild mushroom pasta or barbecued meats.

Why we’re into this wine: Marynissen is home to the oldest cabernet sauvignon vines in Canada, the same vines that produce this bold, full-bodied wine. Layered and complex, it leans more towards smoke and tobacco than typical cool-climate cab-sauv. Like the cab-franc, it also endured a month of fermentation before pressing, followed by a year and a half of aging in specially selected oak barrels. The outcome is a balanced and generous wine with a lingering finish.

What it tastes like: Black cherry, rhubarb and baking spice on the nose lead to black licorice, herbal notes and a touch of vanilla—along with some lovely hints of smoke and tobacco—on the palate. Its excellent structure makes it very food friendly, and also lends itself to further aging.

How to drink it: Similar to the cabernet franc, this wine will age well if you cellar it for a couple of years. If you drink it now, decant or aerate before pairing with moussaka, turkey burgers or braised short ribs over polenta.