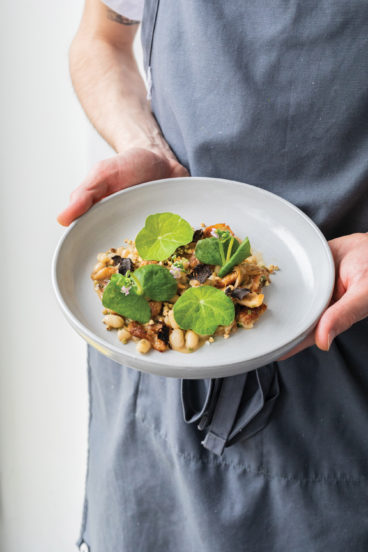 At his restaurant, Ten, chef Julian Bentivegna has bet the farm on veg-forward haute cuisine, and it’s paying off

Julian Bentivegna is in deep. He’s only 25 years old and he just opened his dream restaurant. It’s called Ten—there’s no sign, just a studiously unassuming script on the door. He spent $60,000 of his own savings and borrowed another $200,000. The building, on a quiet part of College near Dufferin, was last a Brandon Olsen chocolate store and isn’t much wider than a subway car.

He’s only serving 10 customers at a time (hence the name), and a maximum of 20 per night. If that weren’t daunting enough, his five- or 10-course carte blanche menu is vegetable-forward and micro-seasonal, changing every couple weeks—which is both very trendy and tricky to pull off night after night.

This would be brave even if he were a known quantity, which he isn’t. Toronto born and Calgary raised, he began cooking professionally at 19. He talked his way into kitchen internships in France and a junior position at Grace, Curtis Duffy’s now defunct but still influential Chicago spot. When his visa ran out, he landed here and worked short stints at Alo, Shōtō and Daishō. He appears to get around on charm, determination and innate talent.

The set-up at Ten, like at an omakase restaurant, is theatrical. Your seat faces a chef’s counter, lit as if it were a stage. Bentivegna and his sole kitchen help, sous chef Simon De Sousa (26 years old, previously of the vegan restaurant Awai), perform a sort of pas de deux, jointly assembling each course with tweezers, sushi knives and the flame of a kitchen torch. As he passes plates to you across the counter, Bentivegna tells a short story about the provenance and inspiration of each course.

Near the end of our drawn-out winter, he favoured brown and pickled things: a meaty hunk of braised lion’s mane mushroom (growing in popularity as a so-called superfood), tart from an apple cider vinegar glaze and a stripe of pickled green onion; a deeply earthy bowl of chicken dashi, miso and cubed potato soup; and roasted and brown butter–basted butternut squash in a pool of cashew cream, all finely balanced by spare drops of rosemary-infused oil.

Some of his ideas are particularly inspired, like a white bean and three-mushroom cassoulet under shavings of black truffle and crunchy toasted buckwheat. There were fireworks, too, in an homage to a signature Duffy dish of Thai king crab, reinterpreted with raw Hokkaido scallops and pickled chives in a broth of cucumber, lime, chili and cold-pressed canola oil. It was spicy, sweet and sour with a trace of fish sauce funk—like a flash of summer heat.

Even a veteran chef would be challenged by the constantly evolving menu. On my last visit, Bentivegna was still figuring out some basics. His plating can be repetitive (a hunk of veg or seafood, a pool of something puréed and a topper of greens or chips) and inconsistent (I got nearly twice as much of that cassoulet as my dinner mate). A highly Instagrammable bowl of Meyer lemon meringue pie could be more tart and taste less of torch fuel. I’d also get rid of the arty water glasses, which slope like a certain tower in Pisa and seem impossible to sip from without dribbling.

Those are all minor quibbles—Ten isn’t a perfect 10, but it’s pretty close. In its early months, the 10 seats were often fully booked. People are starting to hear about the 25-year-old and his curious restaurant. Go just to say he cooked for you before he became a truly big deal.