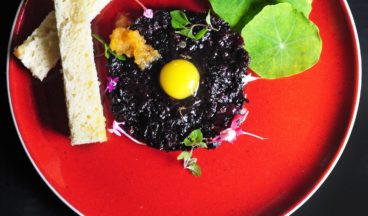 To Bannock and Beyond

One of the questions I often get asked when someone finds out that I review restaurants: what’s the strangest thing you’ve ever eaten? Seal loin tartare, served by chef Joseph Shawana at his new Davisville restaurant, Kū-Kŭm Kitchen, would be right up there. The seal meat was a forbidding midnight black, wet and alien, topped with the quivering yolk of a raw quail egg. It tasted of brine and iron, bringing to mind ice floes, waves raising a mineral foam on rocky shores, and a diet of cod and krill. Paul McCartney won’t be pleased to hear I liked it, though not so much that I’d want it to supplant steak as Toronto’s tartare of choice.

Seal, raw or cooked, makes a big statement—until now, I’d never met a chef brave enough to serve it. Shawana spent months researching and vetting federally regulated seal suppliers; he found one that flies in flash-frozen wild seal loin every week from northern Quebec and Newfoundland, where annual commercial hunting quotas keep the seal population stable. Kū-Kŭm is a restaurant with a philosophy of showcasing what Shawana calls the “whole ingredient,” by which he means using what’s readily available and respecting the source of our nourishment— Mother Nature. He’s a patron of foragers, and Indigenous fishers and hunters. It’s his deeply personal brand of locavorism.

He’s also, not insignificantly, making a case for Indigenous cuisine, which has been near-invisible in this city, at least since chef Aaron Joseph Bear Robe shuttered Keriwa in 2013. Kū-Kŭm is among a handful of Indigenous-owned restaurants that opened in the past year. At Kensington’s Pow Wow Café, which is the home base for a food truck that’s popular at music festivals, there’s a changing menu of Ojibwa “tacos” that are in fact open-face sandwiches of buttery bannock piled with a small hill of your choice of spicy meat, plus shredded cheddar and beets, sour cream, herbs, and nasturtium petals. It’s a good spot for lunch—I’ve enjoyed the smoky pulled pork with an Ontario strawberry soda. NishDish, which is run by the catering chef Johl Whiteduck Ringuette, recently took over the Koreatown corner formerly occupied by Tacos el Asador. You sit at long communal tables under a hand-drawn ceiling mural showing the 13 moons of the Anishinabe calendar. A chalkboard lists comfort food like venison stew and sweet potato–leek soup, none of which I can enthusiastically recommend, especially not the bland, soggy-bottom veggie quiche or a salad of wilted mixed greens. Of these new places, Kū-Kŭm is the most ambitious and exciting.

Shawana, who is 35 years old, was raised by his Odawa family on the Wikwemikong Unceded Reserve on Manitoulin Island. (“Unceded” because the reserve’s tribes did not sign a treaty with the government.) A dishwashing job at the age of 13 led to cooking positions at bars and golf course clubhouses. In 2006, wanting better opportunities, he moved to Toronto. He cooked at Herbs Bistro, the Windsor Arms and Pusateri’s, and took on bigger roles cooking for crowds at the Rogers Centre and the Direct Energy Centre. He ramped up his fine dining skill set as Corbin Tomaszeski’s sous-chef at the now-defunct C5, the momentarily brilliant restaurant in the ROM. Most recently, he served as executive chef at Snakes and Lattes, the successful board game café-bar with two locations, where you’ll stick out if you’re not in a Magic: The Gathering tournament. Playing Dungeons and Dragons for hours on end makes people hungry. In 2016, Ben Castanie, the owner of Snakes and Lattes, encouraged Shawana to plan a special one-off menu for Aboriginal Day. The two realized they were onto something when it sold out, and before long they’d signed the lease for a midtown location formerly occupied by the bistro Mogette.

“Kū-Kŭm” is Cree for grandmother. The restaurant is, in several respects, a tribute to the women in Shawana’s life. Over the bar there’s a hand-painted mural by the Indigenous artists Monique Aura and Chief Lady Bird depicting Shawana’s grandmother, his mother and his mother-in-law. He tweaked the recipe for his grandmother’s cake-like bannock by sweetening it with maple syrup—to better complement smoked and cured fish. He also serves a traditional Three Sisters soup of corn, yellow beans and squash. Yet aside from those two recipes and that mural, you might not notice you’re participating in a celebration of Indigenous cuisine. Most of Shawana’s menu would fly at Canoe, the posh Canadiana restaurant high in the TD tower, or at Antler, Boralia or Montgomery’s, where the locavore cooking follows the seasons. Shawana’s genius is to seamlessly weave his favourite Indigenous ingredients and recipes together with a classic French approach. (“I’m trying to tell my story,” he told me over the phone, meaning he’s not going to pretend he hasn’t been influenced by his time at the likes of C5.) His plate of preserved cattail hearts and milkweed pods, with a smear of plum jam, hits the pickling trend currently sweeping the city. He flatters the gaminess of venison rack chops with peppery nasturtium leaves, fruity hibiscus leaves and a mellow purée of roasted onions. A pheasant and pearl barley stew, brightened by a white wine sauce, is both homey and elegant, like a fancy pot pie filling. The standout is a plate of elk, which he roasts after a spell in a sous-vide bath with spruce tips and juniper, and serves with fingerlings and a creamy purée of artichoke. The deep forest scents serve as a reminder of where the beast once roamed.

His hybridized approach to dessert is less successful. A rhubarb ice cream balances tartness and creaminess, but doesn’t need to be sprinkled with leathery dried berries. And he infuses the cream of a crème brulée with sweetgrass (he forages his own), though it mostly tastes of its over-burnt caramel shell. My preferred dessert option is actually an appetizer, a lettuce-free salad composed of a drift of rose hip–flavoured whipped cream covered with wild blackberries, strawberries, blueberries and edible flowers. A Manitoulin reinterpretation of an Eton mess, it was one of the prettiest and tastiest plates of the summer.

The other question I get asked often about reviewing restaurants: do they know you’re coming? The answer is no. I let my dinner dates make our reservations, and I review anonymously. But it can be tricky to go unnoticed at a small place like Kū-Kŭm, where there’s only the one server, who happens to be one of the most gleeful and personable in the city. I risked a second visit less than a week after my first, which would usually raise suspicions. She remembered me right away but assumed I was from the neighbourhood. A lot of customers are coming back to try everything on the menu, she told me. Shawana’s fans can’t get enough seal.