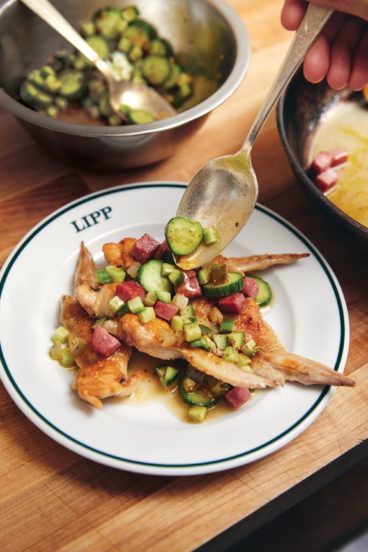 Zach Kolomeir didn’t want to leave Montreal to open one of the best bistros this city has ever seen. He did it anyway, for love, when his girlfriend of four years, Carmelina Imola, entered grad school at U of T. Until the end of 2018, Kolomeir was chef de cuisine at Montreal’s revered Joe Beef, and before that he worked in the kitchen of its sister restaurant, Liverpool House. Joe Beef, like David Chang’s Momofuku group, has become synonymous with a lifestyle—zero tolerance for stuffy formality, very serious about eating and drinking extremely well, and beard maintenance—and Kolomeir is its first emissary in Toronto.

In May, he opened Dreyfus on the first floor of a slender townhouse on the same block of Harbord as Victor Barry’s Piano Piano and Café Cancan. He named his restaurant after Alfred Dreyfus, a Jewish artillery captain wrongly imprisoned in late-19th-century France, because the episode has long fascinated him—Kolomeir grew up Jewish in a French city and aims to merge those influences in his cooking. He also admires the classic French restaurant aesthetic, which he has replicated in Dreyfus’s curlicue signage, bevelled mirrors and marble bar.

There’s already considerable buzz about Dreyfus, and it’s easy to see why. There are just a couple dozen seats including bar stools, because any more would mean less intimacy. Every bottle on the list of natural wines is a little unusual and highly desirable. (Imola, when not working toward her degree, serves as wine buyer and manager.) The handwritten daily menus make the most of Kolomeir’s extensive contacts among small-scale farms, fisheries, smokers and artisanal cheesemakers.

A night should start with some shared snacks—crispy pommes dauphine stuffed with trout roe and finished with a dollop of crème fraîche and caper salt; oysters baked with tiny smoked shrimp from northern Quebec and a cap of parmesan; a plate of karnatzel (pepperette-like garlicky cured beef sausages from a Montreal charcuterie); and a bite-sized cubano sandwich, the fattiness of melted cheese and hot ham offset by the sour bite of a kosher pickle.

If there’s a theme to larger plates, it’s showing off the quality of the ingredients he’s working with. At the start of summer, the wows stacked up: Quebec buffalo mozzarella paired with a triple tribute to asparagus (grilled spears plus a dice of steamed spears, drizzled with an asparagus vinaigrette); a sweet-savoury-tart combo of raw Digby scallops, a jam of strawberries and shallots, strawberry vinegar and rounds of Ontario strawberries; roasted quail with a salad of herbs, cucumber and salami; and—one of the best things I’ll eat this year—butter-slicked Famiglia Baldassarre tagliatelle tossed with B.C. morels and shavings of mimolette. Every so often, an aproned server will swing by and ask if you’d like more baguette (from Liberty Village’s spectacular Brodflour) for soaking up a plate’s sauces—don’t be a fool.

Desserts make a virtue of simplicity. Kolomeir serves a plate of a dozen warm madeleines, dusted with powdered sugar, with a pot of fresh ricotta and rhubarb compote (more savoury-sweet-tart). There’s usually a chocolate cake or a cruller, one night with poached rhubarb and rhubarb syrup. His most inspired idea was absurdly easy: a heap of sliced strawberries, some cracked pepper and a spoonful of honey from his cousin’s Maryland apiary. The strawberries were perfect—picked that morning, sugary and poppy red. After that week, they’d never be the same.