Toronto has no shortage of great, locally roasted coffee, but Reunion Coffee Roasters—which just opened a second location at Stackt Market—is one of the most diligent when it comes to sourcing ethically grown product. Adam Pesce has travelled around the world meeting the farmers who grow the beans used in his Oakville-roasted coffees. Before joining his family’s coffee business, Pesce went to culinary school. These days, he’s pretty happy he doesn’t live a nocturnal chef’s life. Although he’s home way before midnight, Pesce does note that the cafe business has its own woes. “Since we only close Christmas and New Years, I’m on call 363 days a year.” When he’s not visiting Guatemala, Colombia or Rwanda, Pesce’s at home with his wife, Aleida Stone, and their two dogs Rosalita and Indy. 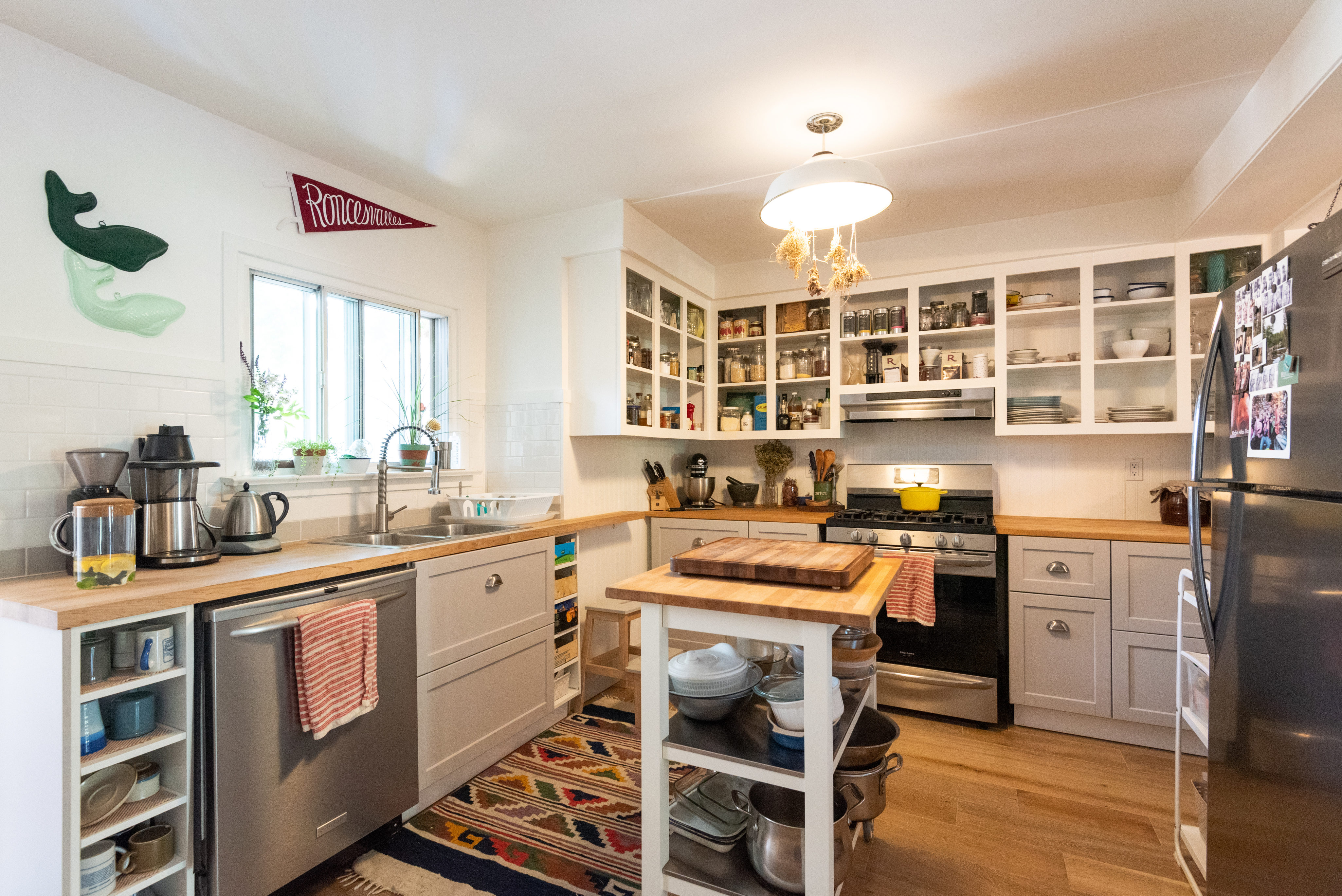 Pesce bought his Junction Triangle home in 2011. The house had just been flipped. Everything, including the kitchen, looked like something out of a Home Depot clearance flyer. But he liked the house because it was next to a park, had a deck and—at the time—the neighbourhood was relatively affordable. Shortly after moving in, Pesce learned that the flippers had bought the place off a drug dealer. At all hours, people would knock on Pesce’s door, but the only stimulants he had to offer were coffee-based.

Pesce didn’t like the kitchen at first: it was cramped, cheap-looking and closed off. It wasn’t until last spring, though, that Pesce and Stone could finally afford a small reno. They upgraded to a gas stove and replaced some cabinets and nixed a few others. In the process, they ended up purging a bunch of kitchen junk, and have been trying to live a less cluttered life ever since. 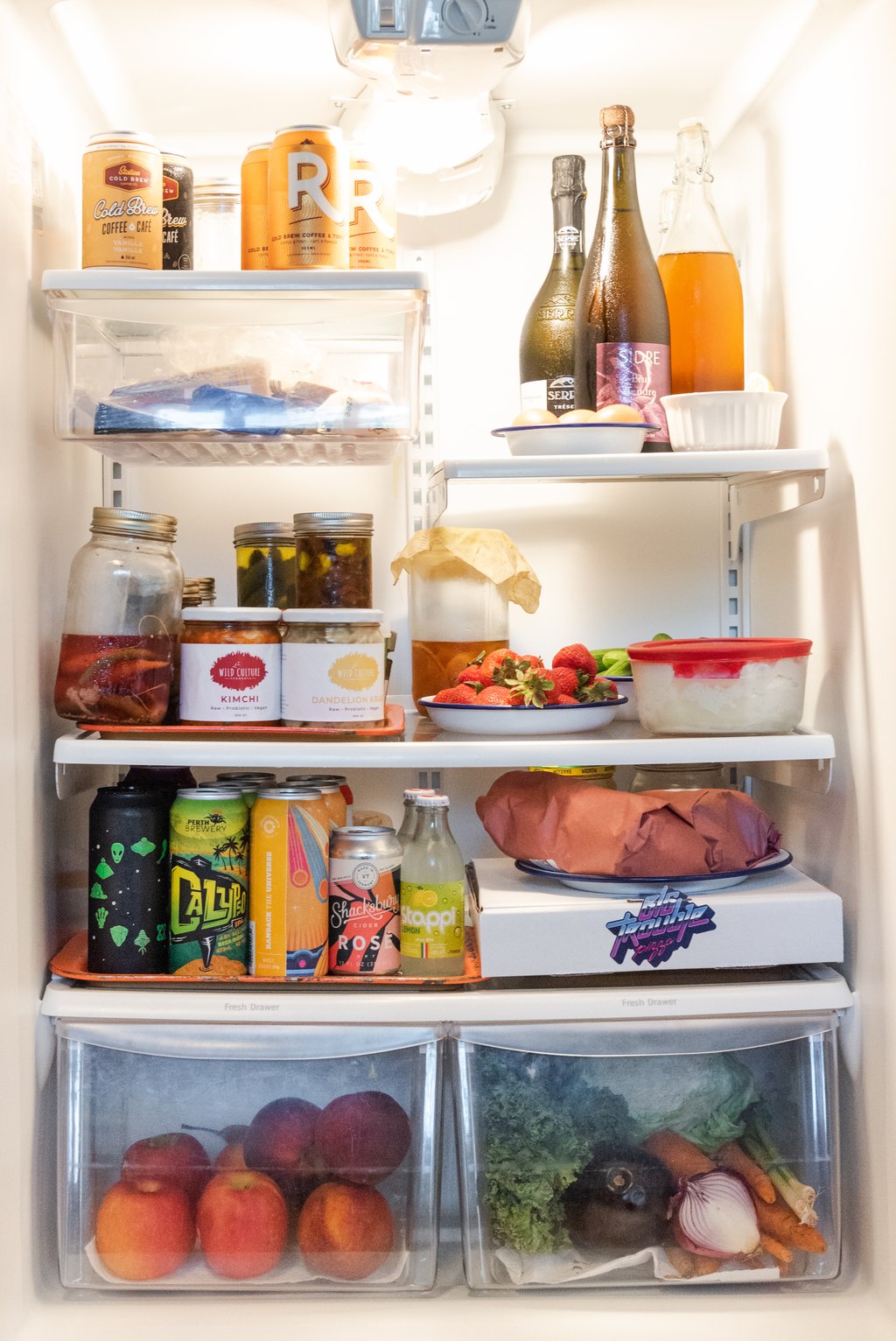 Most days, he’s up for 7 a.m. to walk and feed the dogs. Breakfast is typically a quick green smoothie (kale, apple, banana, ginger), after which he’ll head to his Roncy Reunion outpost for a coffee. “If I have a bit more time, I might brew a pot of drip,” he says about his weekday routine. Then it’s off to Oakville to oversee the roasting operations.

His job often has him tasting different coffees throughout the day, so Pesce keeps his nine-to-five food intake pretty plain; it’s either last night’s leftovers, sushi or a deli sandwich. Weeknight dinners are usually a no-fuss plant-based affair. In an effort to lessen their carbon footprint, the couple eats vegetarian Monday to Friday, saving their meat intake for weekends. Popular weeknight meals include grain bowls and pastas. 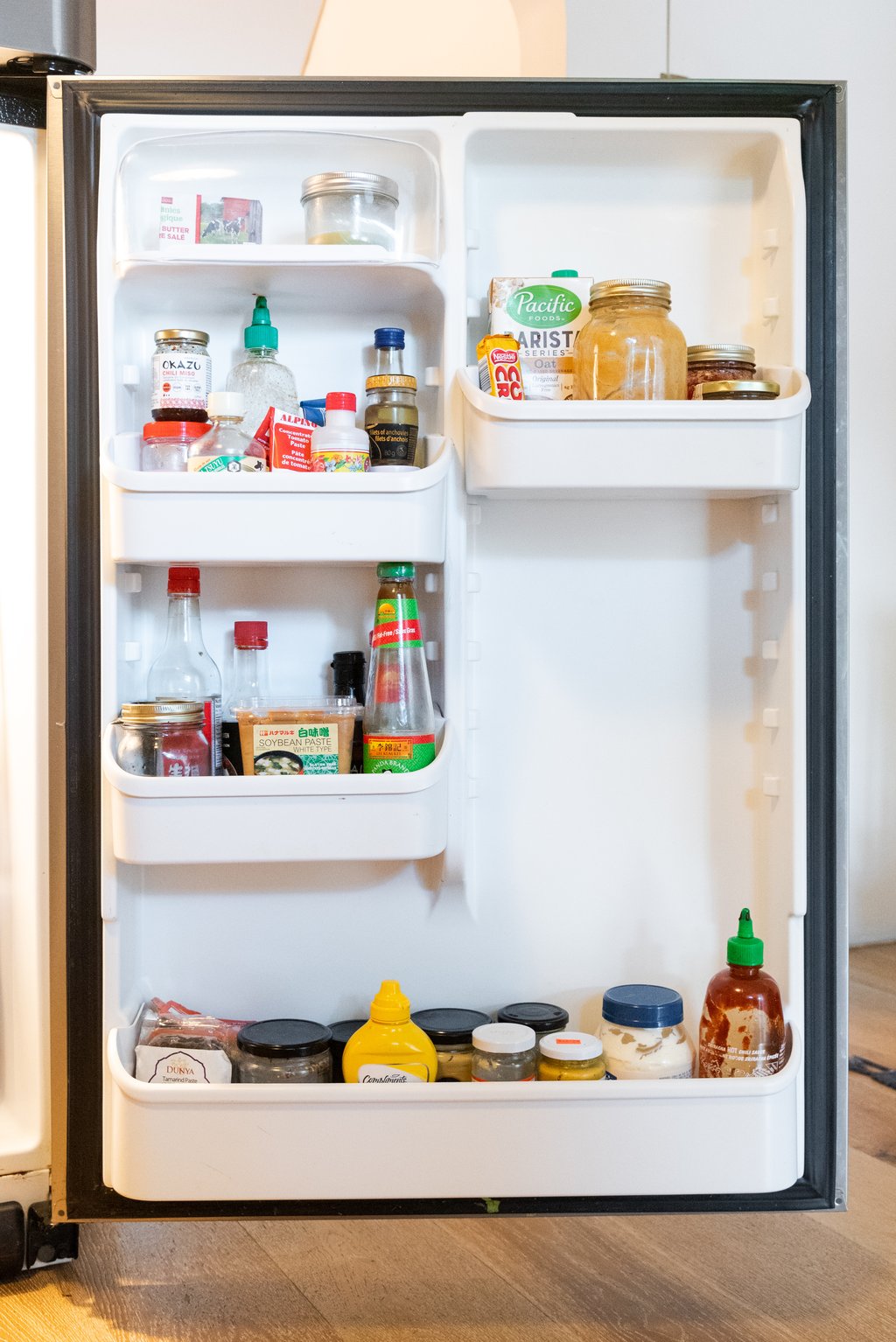 Stone and Pesce love to entertain—they host a dinner party every Sunday. Although Stone loves everything her husband cooks, she’s a huge fan of his barbecue. Every Easter, the duo throw what they call a “Great Friday” party on Good Friday. It’s basically a boozy brunch potluck for a few dozen of their closest friends. The fête’s pièce de résistance is always a giant brisket that Pesce and Zach Slootsky (who owns the Federal and Gold Standard) prepare. It takes an entire day to make: the meat is cured, smoked for eight hours then steamed in beer for another eight hours.

When it comes to groceries, Pesce and Stone like to keep it local with an emphasis on buying items with little or no packaging. They do most of their shopping on Roncesvalles. For fruit and veggies, they say Maple Produce can’t be beat: the prices are low, the produce is fresh and the selection is bountiful. When they do eat meat, they like to splurge on quality stuff from the Meat Department. And if they’re buying seafood it’s going to be something sustainably caught and in season, often from De La Mer. For everything else, they alternate between Fiesta Farms, PAT and Nations. 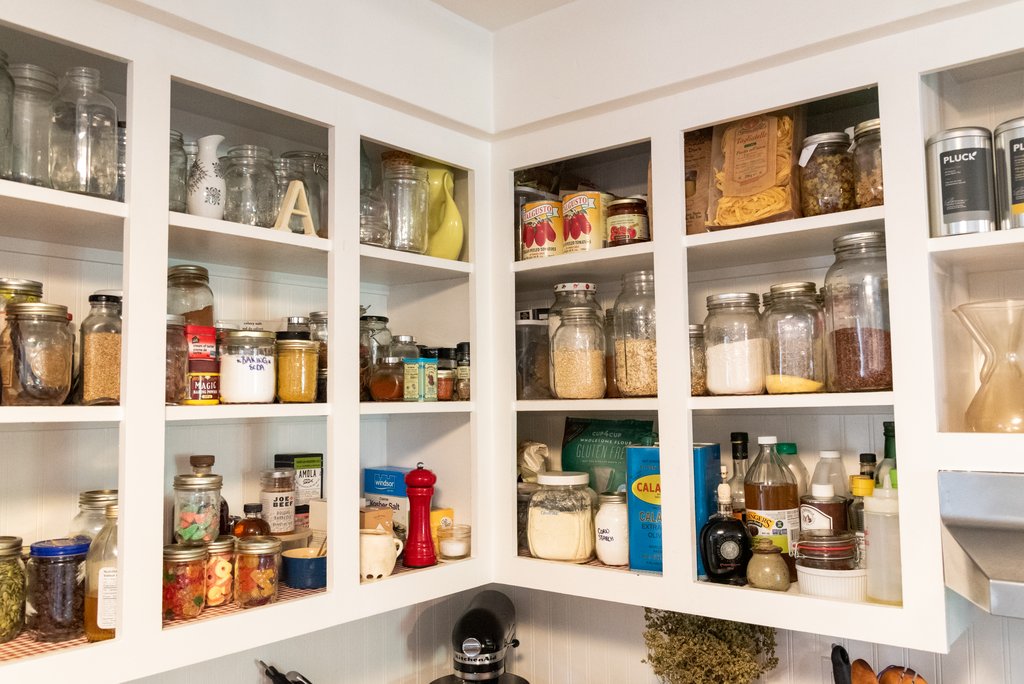 The couple limits their eating out to weekends. For cheap eats, it’s Buk Chang Dong Soon Tofu or Sushi on Bloor. For date night, it’s either the Federal or Annex Commons. Pesce loves pizza, but often can only order it when his wife’s out of town (because of her gluten allergy). At the Annex Commons, he’ll get some Big Trouble pizza, and she’ll chow down on Seven Lives tacos. Plus, the wine list keeps wowing them with interesting bottles. The couple are also nacho snobs. After some diligent, city-wide recon, they’ve decided that Intersteer makes the best plate of no-nonsense nachos with some top-tier cheese distribution.

Of course there’s a cupboard devoted to coffee (and tea): 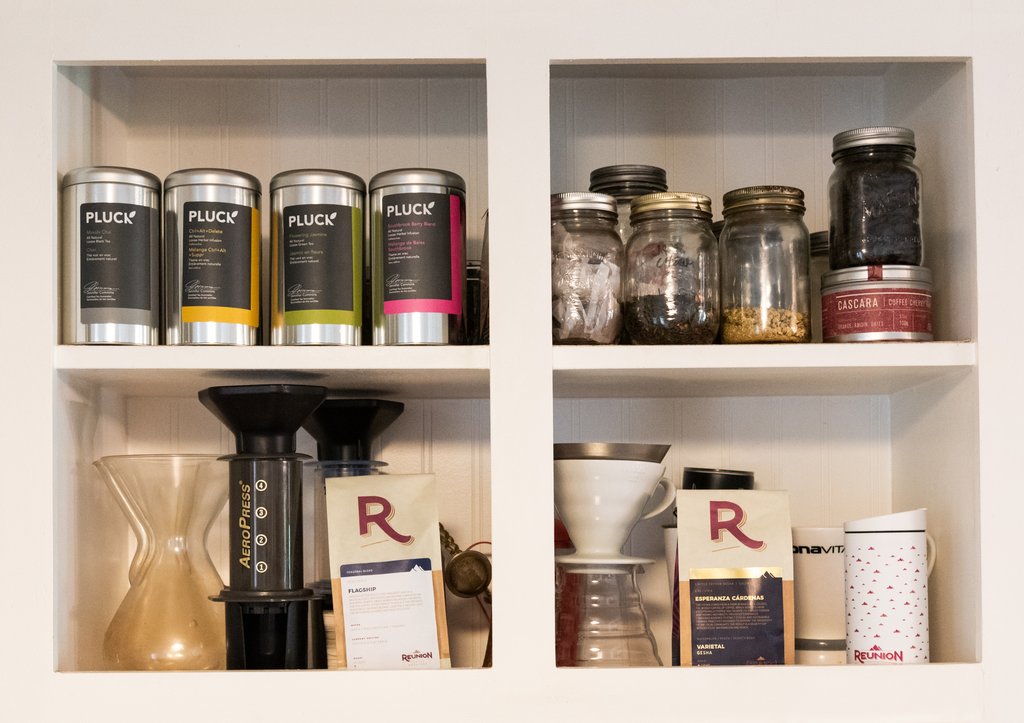 Pesce thinks Mattachioni’s wood-fired sourdough is the best bread in the city. Stone has celiac disease, so she’s stuck eating frozen gluten-free stuff. They can both enjoy the ricotta from International Cheese, though. It’s made fresh every day. When they bought this batch, it was still warm: 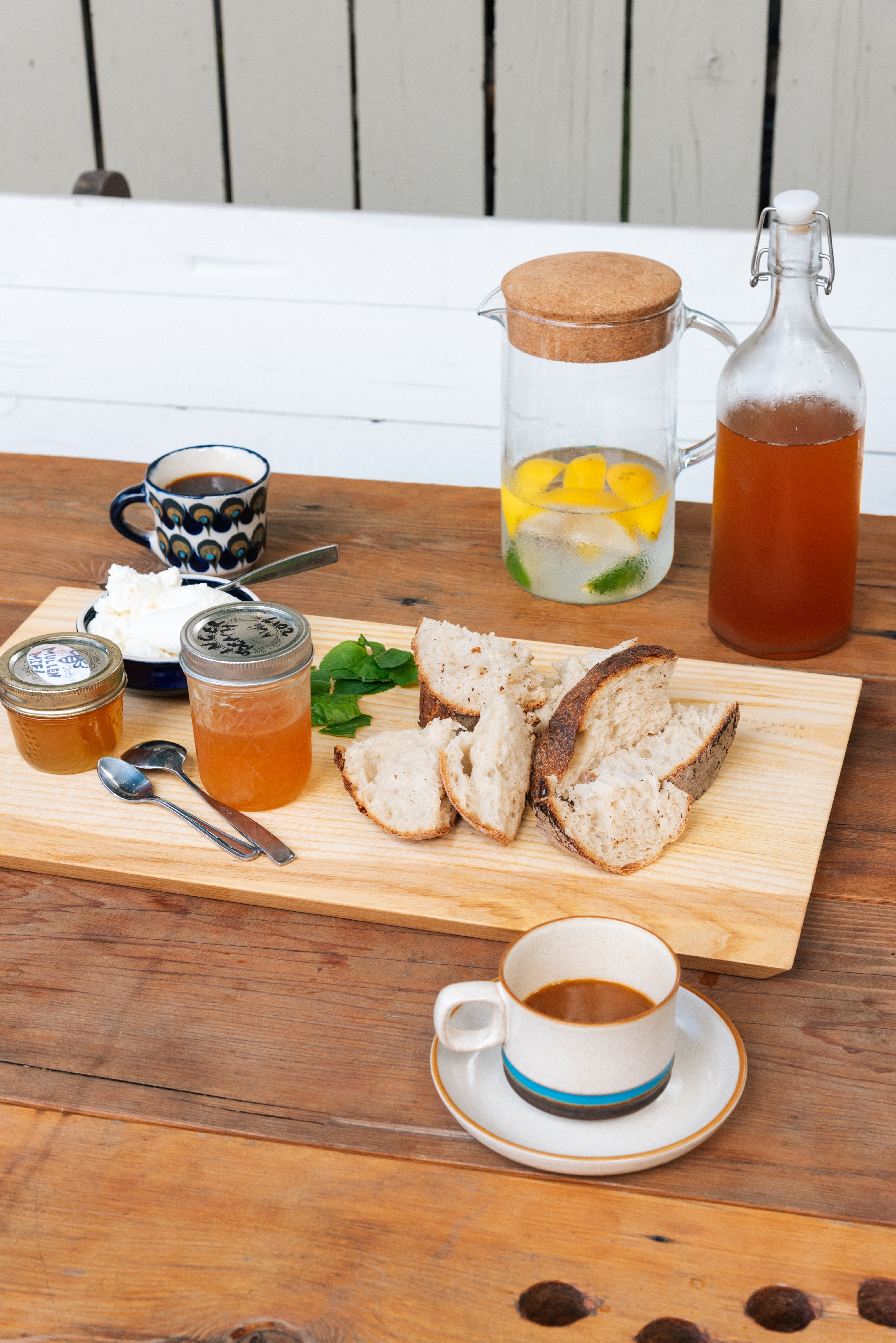 Pesce loves to grill. He got this Big Green Egg knockoff at a charity auction for only $300. “I felt guilty that I got it for that price, but it was tucked in a corner and no one else had noticed it,” he says: 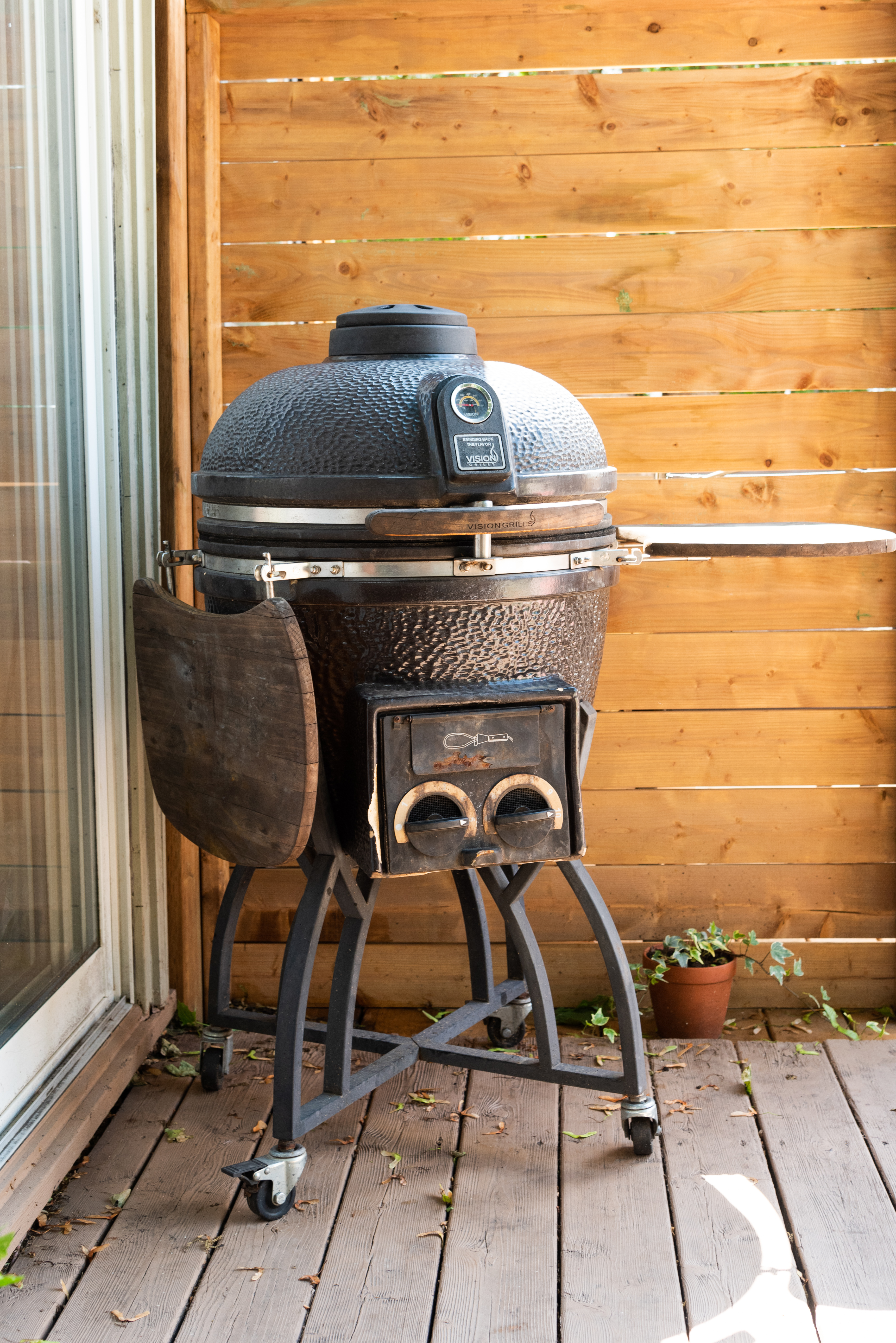 Pesce finds himself flipping through his cookbooks less and less. Typically, he’ll get an idea in his head—after he’s eaten a dish at a restaurant or seen it on a TV show—then he’ll try to perfect it. Last winter, he became obsessed with miso soup and made at least a dozen different versions before settling on one:

This book belonged to Pesce’s grandmother, who immigrated here with his mom from Livorno, a small town on the coast of Tuscany. Although Pesce can read Italian, it’s a bit of a bear to use the recipes in here as they’re all written in poems. He finds the book equal parts charming, pretentious and just plain quirky: 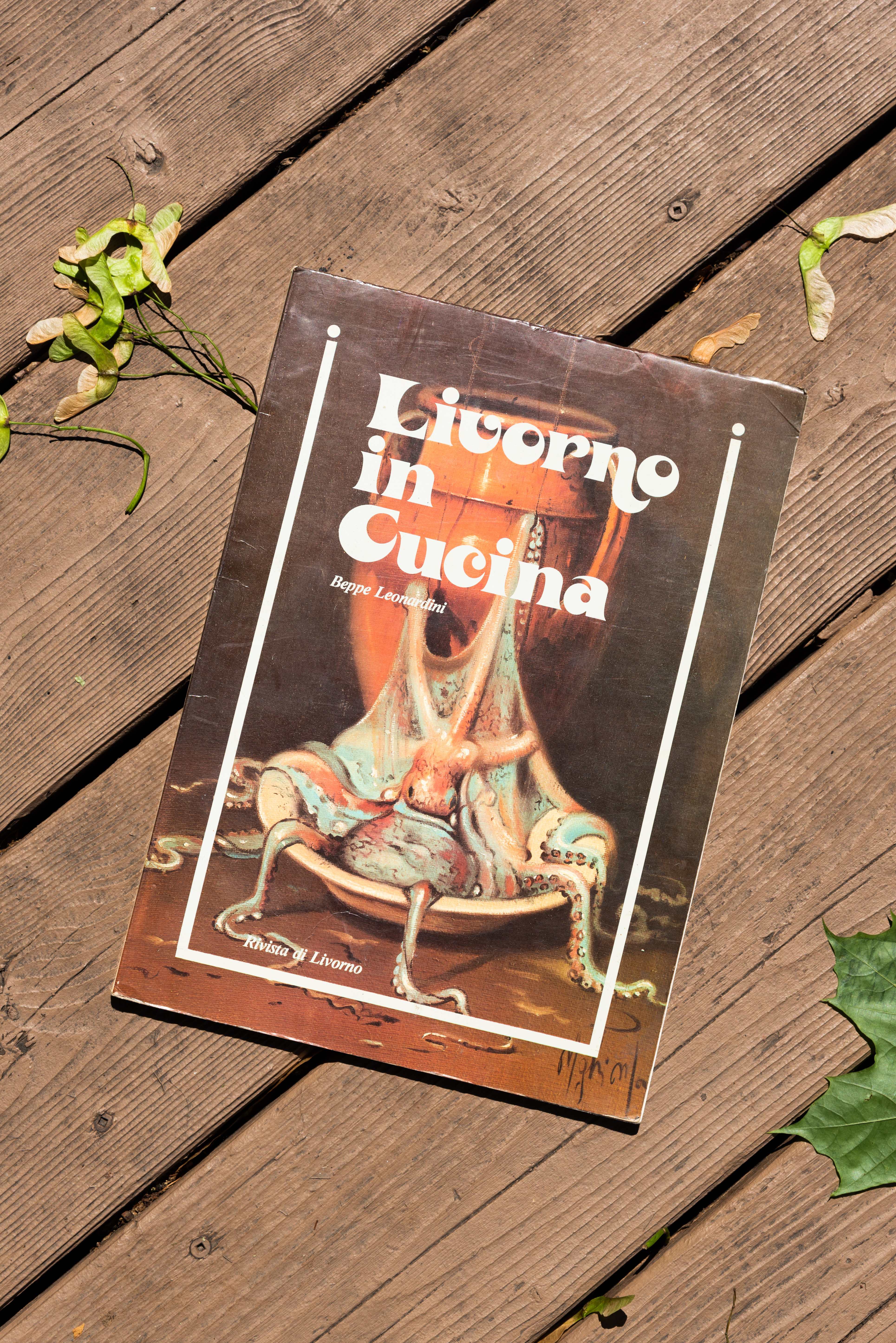 The dried chilies, pickled peppers and hot sauce are all from hot peppers the couple grew last year. They had so many veggies they’re still working through 2018’s harvest: 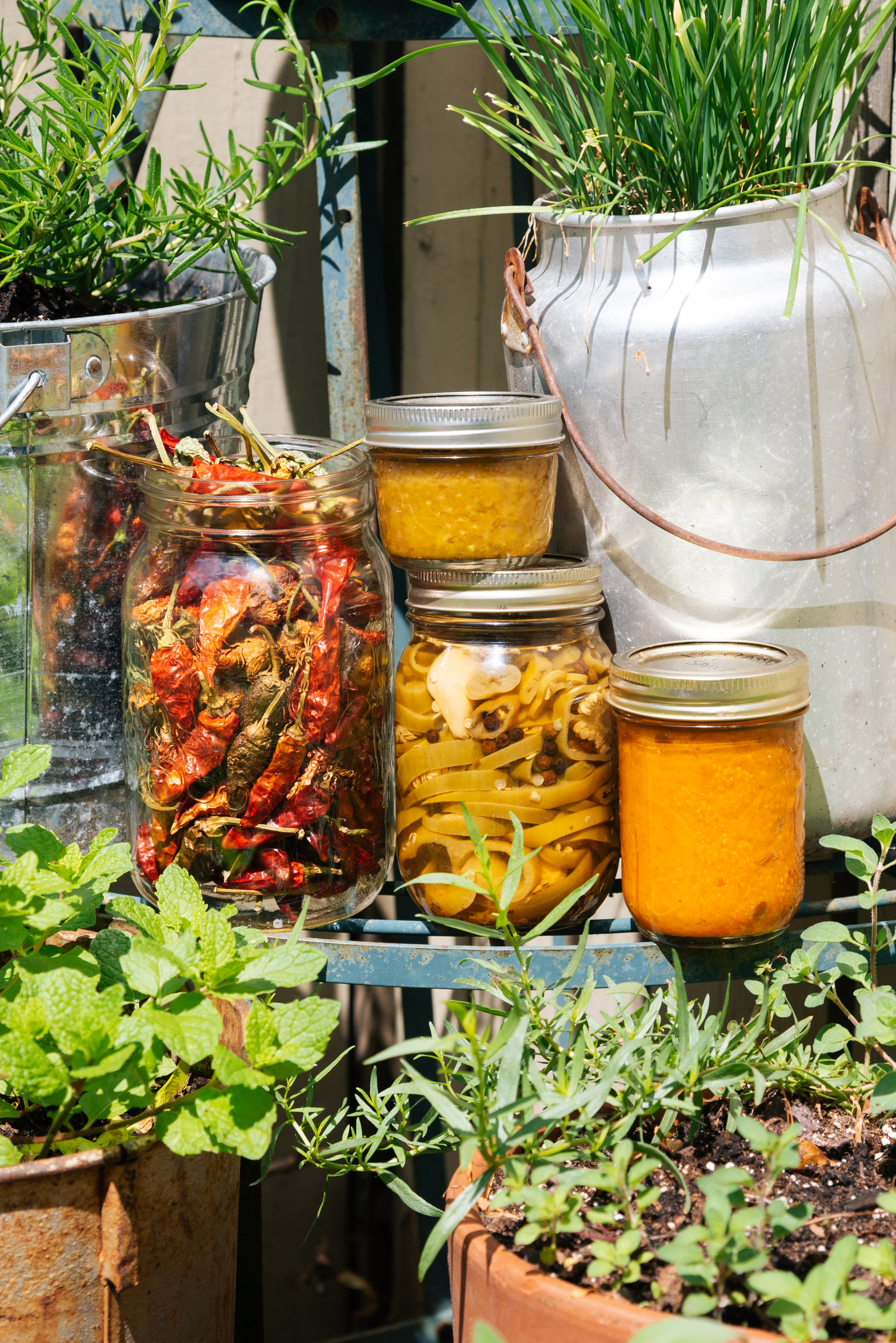 They aren’t doing too poorly in the herb department, either: 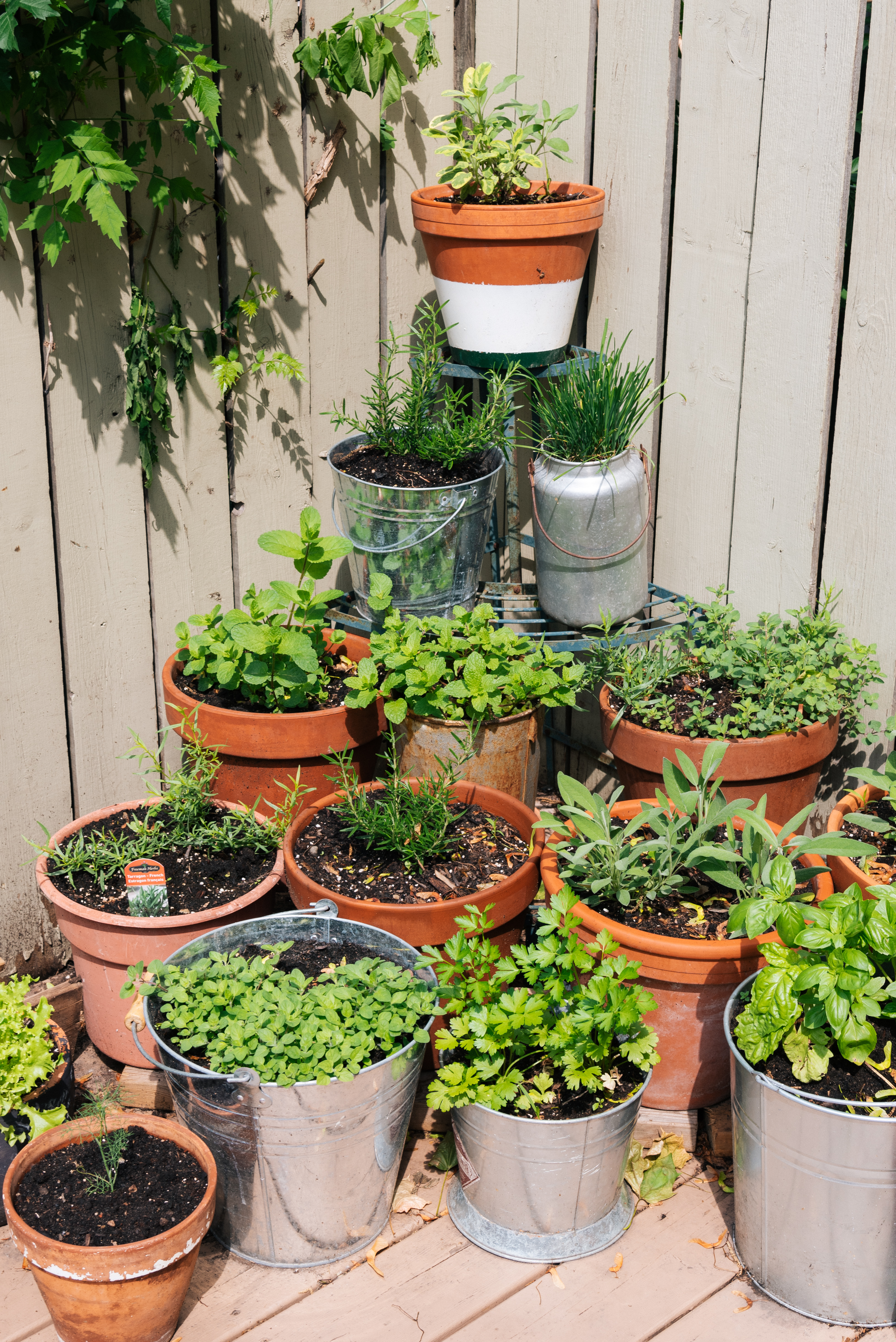 When it comes to wine, Pesce generally gravitates to reds: 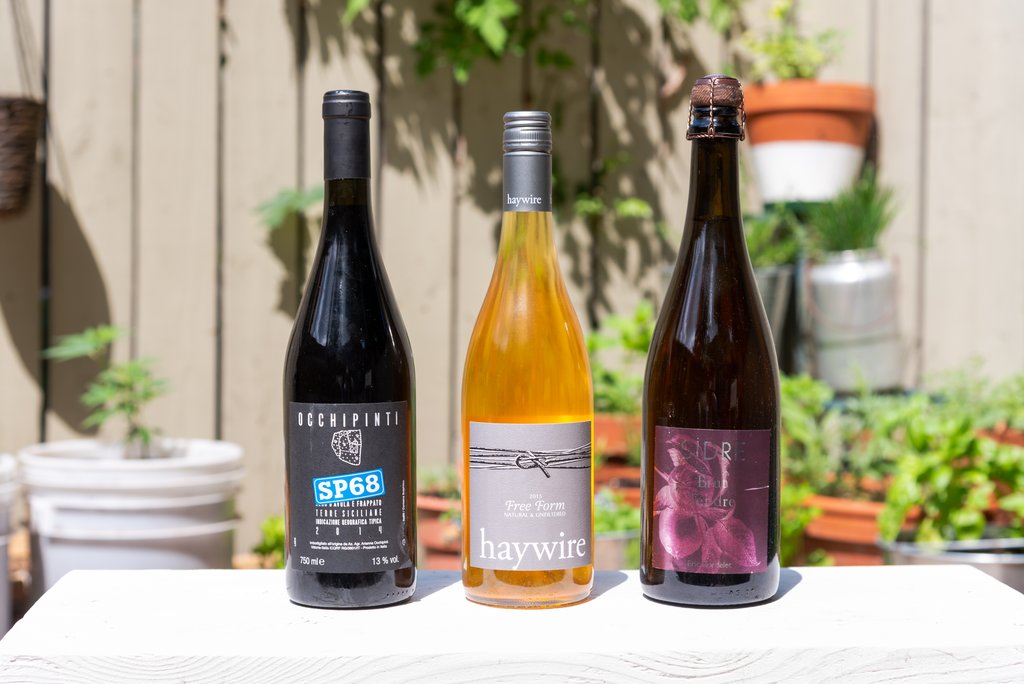 Here’s some of their favourite booze: 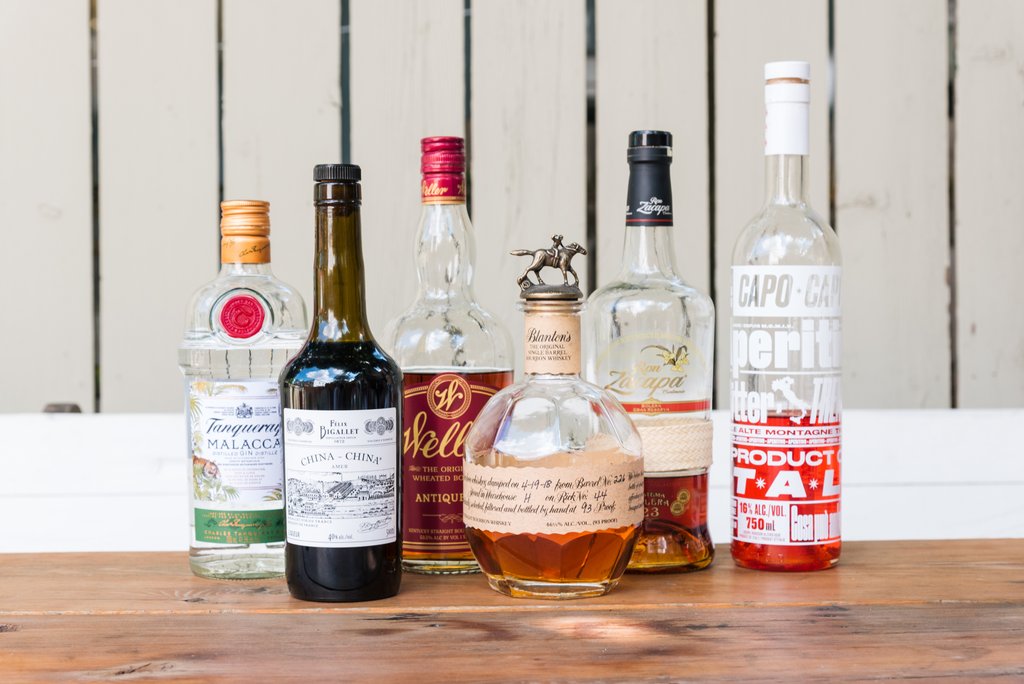 And some of their favourite wall art: 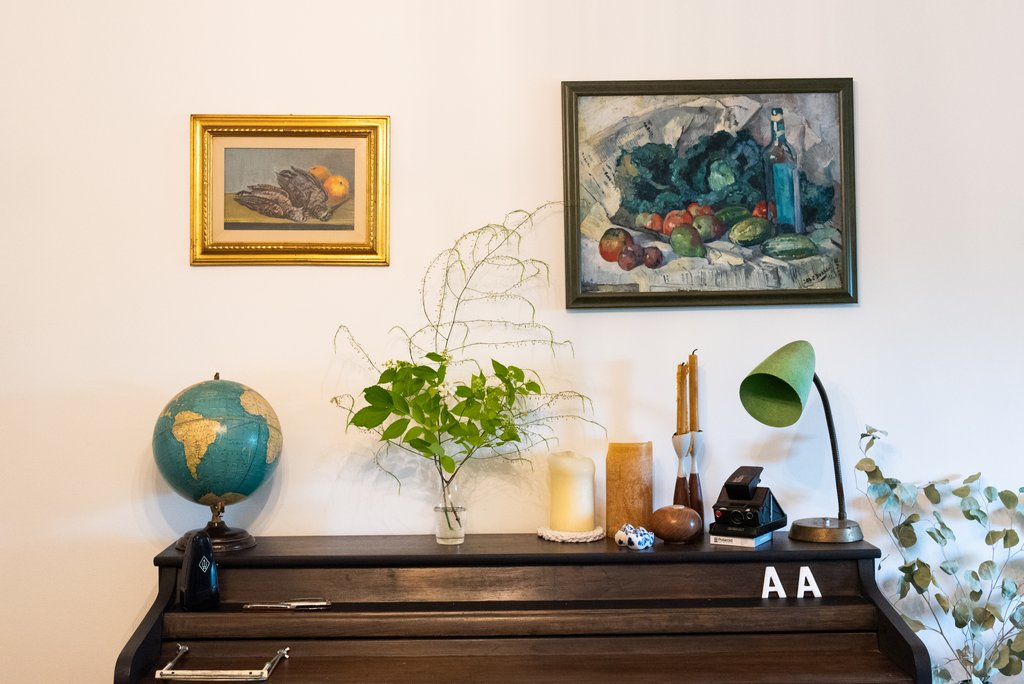 Here they are again, with Rosalita and Indy: 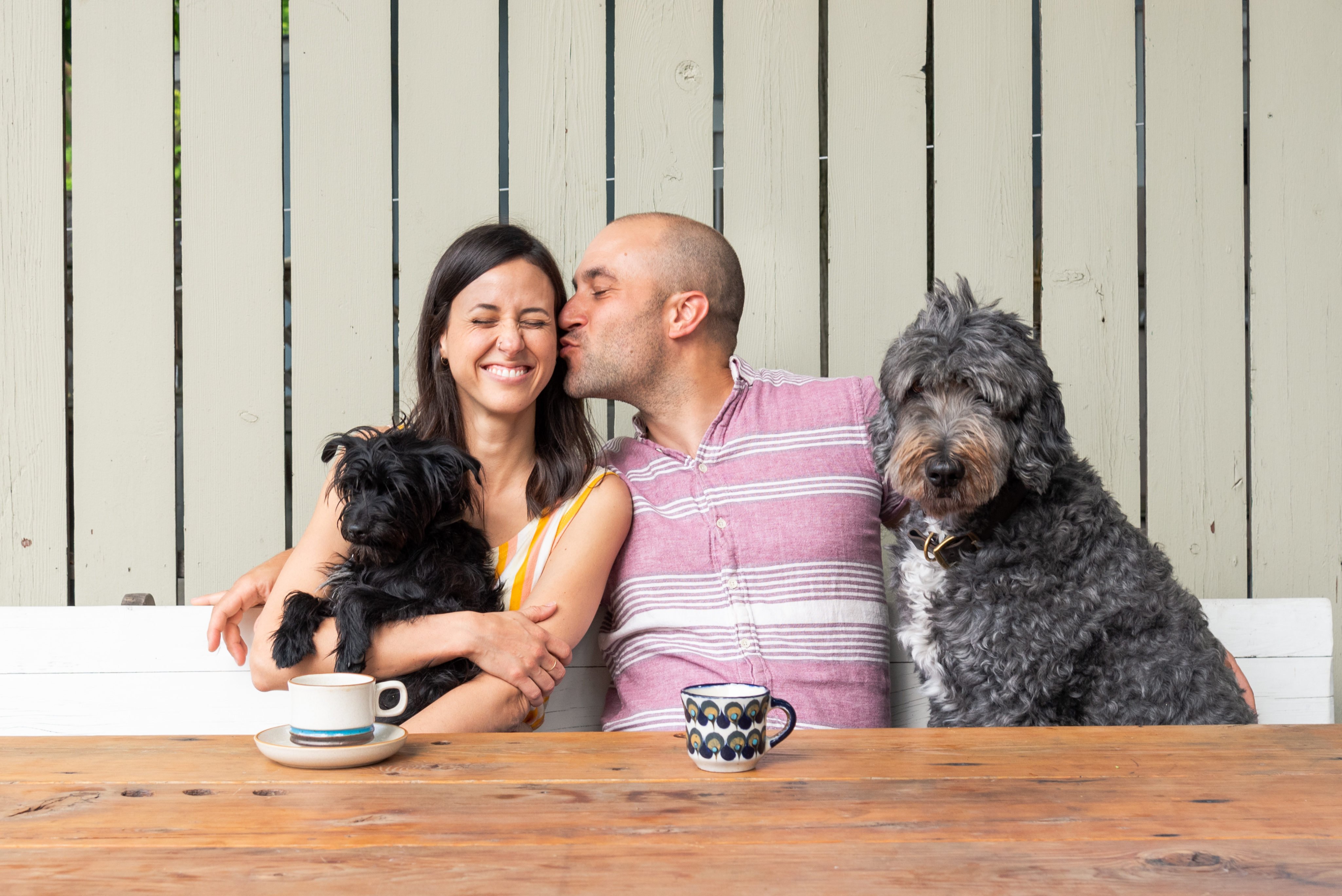 Thanks for having us, Adam: 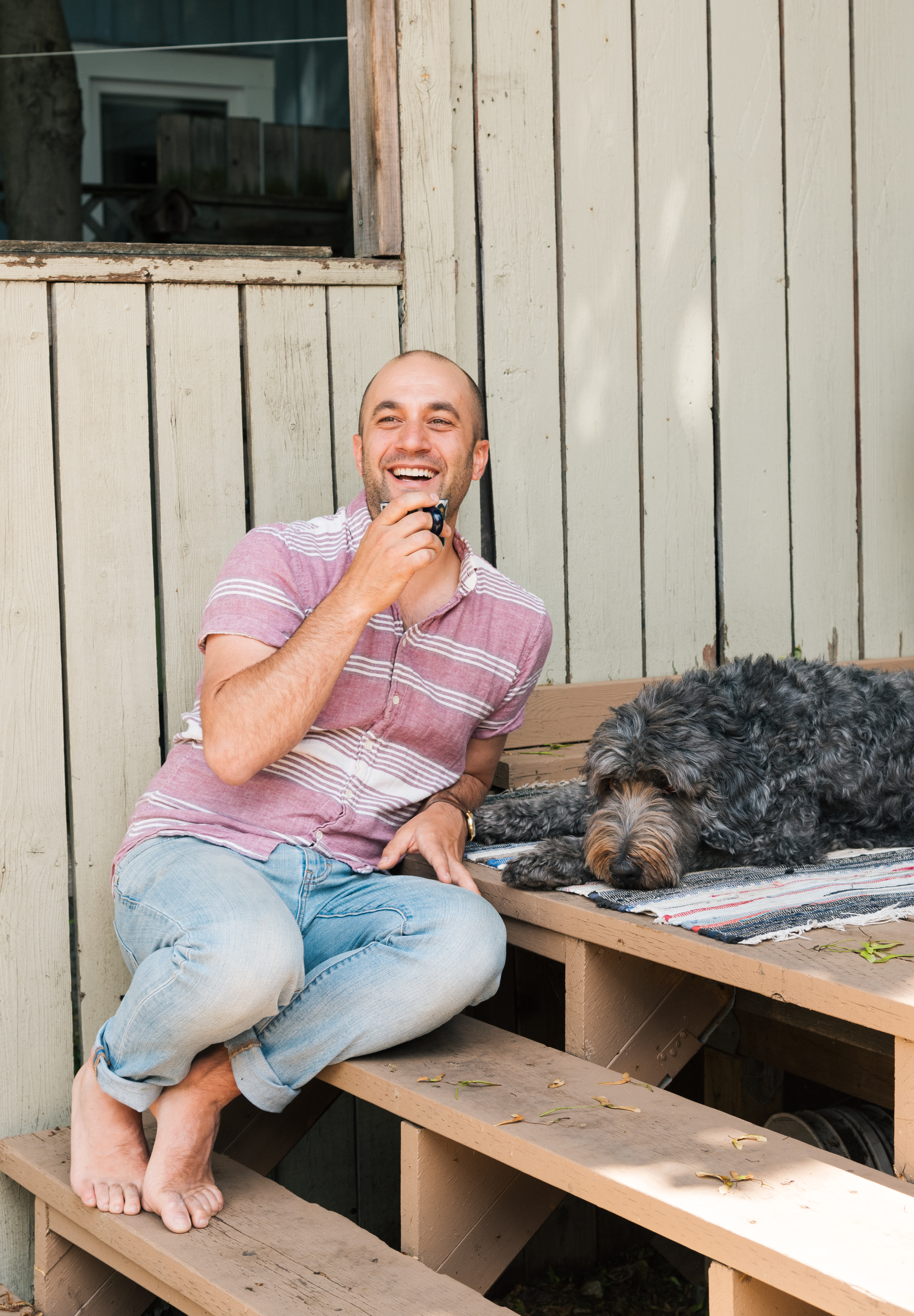