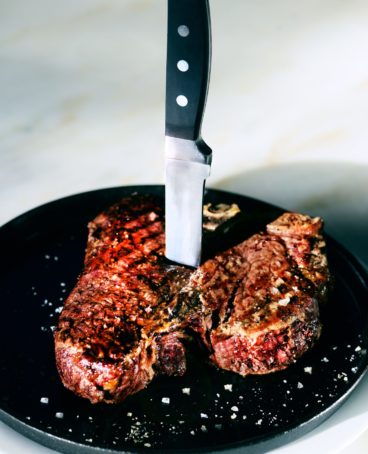 When BlueBlood, the steak house on a hill, opened late last summer, everything about the place seemed calculated to provoke maximum envy. The cocktail of rare scotch and cognac ($500 a glass). The high-roller steak menu that includes three Wagyu varieties ($250 for a four-ounce “tasting” of each). The walls of celebrity-centric art—­including blank-eyed Warhol portraits of Wayne Gretzky and Karen Kain. The fact that it occupies a group of ornate rooms in the city’s original monument to overreach, Casa Loma. Even BlueBlood’s name is asking for it. In a year of notable restaurant openings, it was the one I heard the most people talking about. It captured something about Toronto’s new gilded age, when everyone wants to be a robber baron or at least get rich on real estate. People who’d never dream of ordering a $500 cocktail were jockeying for a reservation.

The soonest available was a month away, and my only options were 5:15 or 10:30 p.m. My dinner date and I missed Drake by a few days. The fifth-richest man in rap—his net worth now at $90 million (U.S.), says Forbes—had taken his mom there for his birthday, and recorded the occasion for posterity on Instagram, wearing a pumpkin-orange sweater, seated at the head of an old Hollywood–style tufted horseshoe banquette and picking his way through a seafood tower. Unlike Drake, we wouldn’t have the place to ourselves. Driving up, we were met by crowd-control cops and sidewalks of queuing ticket holders. Casa Loma, in addition to housing BlueBlood, hosts weddings and tour groups. In the weeks leading up to Halloween, the castle and the grounds are also the site of a fright show called Legends of Horror. We abandoned our car blocks away and followed the screams.

The restaurant entrance, past pink marble lions, mid-roar, is on the west side of Casa Loma. Every Toronto kid learns on a school trip how, 100 years ago, the hulking, neo-Gothic mass of turrets and battlements was the largest private home in the country, with its own indoor pool and bowling lanes, and an oven that could roast a whole ox—an early Toronto nice-to-have. Henry Pellatt, Casa Loma’s original owner, was a financier and hydro magnate who lost his empire in a battle with public utilities and his house in a battle with the city over tax increases. A few years ago, Liberty Entertainment Group, which runs Liberty Grand and Rosewater Supper Club, among other properties, won the lease to the entire Casa Loma site. The company pumped millions into a restoration of the building and grounds. Cleaned up, it looks like a theme park castle—one that’s served as a kitschy baronial stage set for everything from X-Men to the recent (and lousy) network TV version of Rocky Horror Picture Show. I suspect Pellatt would prefer the idea of a Casa Loma steak house. BlueBlood’s three dining rooms are like a steroidal Keg Mansion, with imposing fireplaces, curlicue plasterwork and panelling, and antlers everywhere. A mounted moose head presides high over the bar.

BlueBlood is what I think of as a celebration restaurant. STK, the high-roller steak house in York­ville that’s part of a global chain, and Lavelle, the rooftop King West restaurant with a members-only patio pool, are special occasion spots in the same vein. You go to such a place more for the pomp than the cooking. After you make your online BlueBlood reservation, you receive a confirmation call during which a hostess asks what you’ll be celebrating—and sounds disappointed if your answer is nothing.

Everything I ate on my trips to BlueBlood was good, some of it very good, but at queasy prices. One bill ran $501, another $508—just two of us, ordering conservatively (no $500 cocktails). The restaurant is overseen by a corporate exec chef, Michael Ewing, who got his start in the catering operations of big hotels. The kitchen is run by a chef de cuisine, Meagan Andrews, who has worked at Weslodge and the brewpub Batch, and a chef de grille, Eddie Chung, who worked at the Keg and served as sous-chef at Susur Lee’s now-defunct Bent. Like at a dinner theatre, much effort goes into putting on a show. Let’s start with the cocktails: the one I saw at most tables, BlueBlood’s version of an old fashioned, arrives under a tall cloche, which your server lifts and swirls around your table with a David Copperfield flourish, dispersing a cloud of applewood smoke that looks momentarily cool and complements the bourbon and Calvados, but lingers. The other signature BlueBlood scent comes from white truffle oil—our table was ceremoniously presented with a bottle for dipping sourdough and lavash, which are better left untouched by truffle funk. Every dish came with a luxury frill, like an appetizer of well-seared hunks of foie gras accompanied by mostly flavourless icewine jelly; crab cakes overdressed with a dill aïoli; and that much-­Instagrammed seafood tower, which turned out to be a couple of legs of Alaska king crab, a split lobster tail, exactly two shrimp, and beet-cured salmon (we wished for more than the two slices), plus multiple mignonettes, flavoured with yuzu or bacon. I ended one night with cheesecake, which managed to be both creamy and airy. It didn’t need the little crown of puréed berries or the hay ash—a trend I was hoping had run its course—deposited on one side of the plate like a line of coke waiting to be snorted.

BlueBlood is strongest at steaks. The cuts I tried were on par with the best I’ve had at corporate operations like Ruth’s Chris or Morton’s. Chung preps he-man steaks—rib-eyes, porterhouses, tomahawks—from prime suppliers across the U.S., Canada and Australia. One night, I had a beautifully thick, bone-in rib-eye from a Halton Hills farm. And while Chung hasn’t the advantage of Pellatt’s ox-sized oven, he is a precise griller. For steak fetishists, there are grades of Wagyu from the U.S., Australia and Japan—the last is the priciest, at $200 for six ounces of filet mignon. Unless you’re a global investment banker, NBA player or former Degrassi star, you probably almost never go for the Wagyu. Wagyu is for ballers. One night, in the interest of baller research, I ordered the $250 Wagyu tasting. The three cuts were identical on the outside, slightly larger than hockey pucks. Taste-wise, the Australian and U.S. were interchangeable. The cut in the middle, from a breeder in Kagoshima prefecture, was notably more tender, buttery and richly beefy, the pampered pasha of steak.

The same night Casa Loma hosted screaming fright-showgoers, the castle was booked for a wedding. Out front, the party had parked a dozen low-slung Italian luxury cars. Wandering down the castle’s halls, looking for the BlueBlood washrooms, I passed by the wedding reception, for which Casa Loma was, no question, the ideal setting. They had ice sculptures, towering arcs of flowers and greenery, bridesmaids dressed like ­Disney princesses and, in the centre of it all, a harp player, a sparkling crown on her head, performing on a small stage, standing inside a glowing plastic orb not unlike the one that delivered Glinda the Good Witch to her meeting with Dorothy. Apparently that’s a thing at weddings now—women trapped in glowing orbs. Sometimes you need to go to a fantasy-land steak house to appreciate how there’s no place like home.