Beach umbrellas, boozy slushies and barbecued burgers: How a group of Toronto business owners turned a parking lot into a tropical paradise

Beach umbrellas, boozy slushies and barbecued burgers: How a group of Toronto business owners turned a parking lot into a tropical paradise 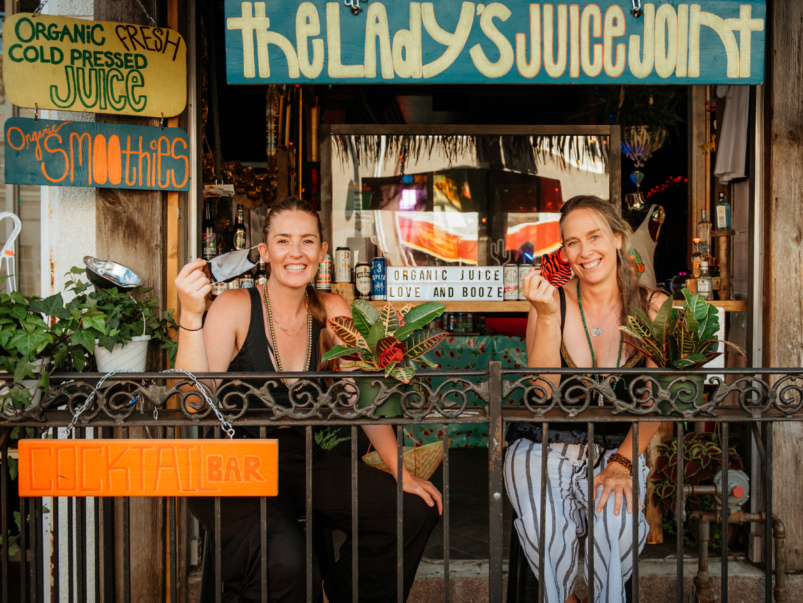 Venice Beach brings a little slice of SoCal to Dundas and Dovercourt, turning a previously unused parking lot into a beachy, boozy, blender drink-y oasis. The project is a co-production between the people behind Unboxed Market, Toronto’s first waste-free grocery store, and Bar Mordecai, which launched across the street in January. “We wanted to make it feel like a vacation,” says Bar Mordecai’s Emily LeBlanc. Here, she and Unboxed’s Michelle Genttner explain how they put up paradise in a parking lot. (Don’t it always seem to go…)

When Genttner and her business (and life) partner, Luis Martins, launched Unboxed, the 2,500-square-foot empty lot a few doors down came with the lease. “Even before Covid, we were trying to figure out something to do with the space. For almost a year we just used it to park our van,” says Genttner. She and Martins knew Emily and Josh LeBlanc (also business and life partners) casually from the Toronto hospitality scene, but they reconnected when the LeBlancs launched Bar Mordecai across the street. “Building a restaurant is a very trying experience. We could come into Unboxed for coffee, totally bedraggled,” says LeBlanc. They got to talking about a possible summertime collaboration because Bar Mordecai doesn’t have a patio. They tossed around a few different concepts—a beer garden, a wine bar, an artisanal market—and then along came Covid.

With Bar Mordecai closed indefinitely, and outdoor dining looking like the most promising aspect of the post-Covid restaurant scene, patio brainstorming moved to the front burner. Surf culture felt like the perfect antidote to these anxiety-ridden times. “Everyone is so stressed out right now, so we wanted something that felt like Venice Beach—the vibe there is chill, relaxed,” says LeBlanc. “I think a lot of people are missing getting away this summer. We started thinking about our place in terms of creating the ultimate staycation.” The earth-friendly ethos of Venice Beach is a match with Toronto’s first waste-free grocery store: there are no straws, no cutlery, and food is served in compostable containers.

The hanging sign is a nod to the iconic one that has marked the entrance to California’s Venice Beach since 1908. “It’s the first visual that came to mind once we came up with the theme,” says LeBlanc. “Theirs is fully wired and constructed out of metal—all things we didn’t have the time or money to do—but Josh said he thought he could make it work, and it did!” It took multiple ladders and a lot of trial and error to get it up, but the effect of the metallic acrylic pays off. (“Especially as the sun is going down and there’s this awesome reflective effect,” says Genttner). Other potential odes to California didn’t make it past the brainstorming stage: “At one point we considered sand, but that’s a lot more fun in theory than in practice,” says LeBlanc.

Step 4: Cocktails, but make them slushies

Pastels were an obvious colour palette, given the Surf City motif. Most of the equipment was brought over from Bar Mordecai, but the bar itself is a custom build, created by Dustin Keating (who ran Track and Field with Josh Leblanc and now runs Kick Rocks Custom Furniture). To drink, there are a few canned beers and ciders, wine (including some for $2 an ounce) and cocktails, a few of which are of the slushie variety: strawberry daiquiri, blue crush, cyclone.

And if you’re lucky, you might be served a drink perched in a flamingo floatie.

The food menu includes classic summer snacks like bacon-wrapped hot dogs, fish tacos, street corn, pulled pork sandwiches and a burger that’s an homage to In-N-Out (a California fast-food institution). All the food is taken care of by the Unboxed team. “We have a large industrial kitchen in the back of the store where we run our catering side of the business. That’s obviously slowed down a bit because of Covid, so this is great,” says Genttner.

You can’t have a beach bar without colourful brollies. These blue-and-white-striped ones were donated by Grey Goose. “Usually they lend them for festivals and events for a few days, but none of that stuff is happening this year, so we have them for the season.” They had to employ some DIY ingenuity after learning that umbrella bases were sold out everywhere. “Josh poured cement into a pail and then we painted them blue,” says LeBlanc.

It may not be beach-themed, but take a pretend spin in the rusted-out forklift. Think of it like one of the coin-operated rides at Dufferin Mall, but construction-themed. Kids love it!