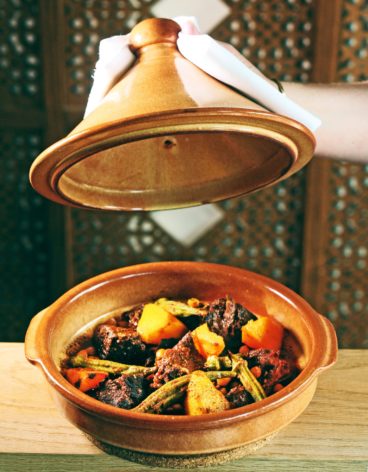 Doug Penfold has mastered Spanish, French and now Moroccan cuisine. How the middle-school dropout quietly became one of Toronto’s most inimitable talents

Doug Penfold has a real-life rags-to-riches story. First, the riches: he’s the chef-proprietor of Cava, the midtown Spanish spot where, after 11 years, it’s still tough to get a reservation; Chabrol, the Yorkville bistro with a card dedicated to champagne and caviar; and Atlas, a spectacular new Morocco-inspired kitchen he opened last spring on Dupont. Now, the rags: as a kid in Vancouver, Penfold didn’t pass Grade 8 because he was too busy washing dishes in restaurants to help his struggling single mom and younger sister. He later cooked at fish-and-chips shops and fancy, white-linen French hotel restaurants. In 1993, with $1,000 in savings and his entire life in a backpack, he took the train to Toronto, where he knew exactly no one. So he knocked on restaurant delivery doors, offering to work for free, until he met Martin Kouprie, who hired him as a prep cook at the Financial District hot spot Jump. From there, he climbed to the centre of the city’s food scene, cooking for Jamie Kennedy, Didier Leroy and Anthony Walsh. He was the dynamo behind those famous names. In 2001, Chris McDonald asked him to join the kitchen at Avalon, then the city’s top restaurant. They got along, shared a love for the pressures and theatricality of fine dining, and later partnered to open Cava.

Penfold is now 43, and has an elfin squint, a long, backwoods beard and the thick limbs of a pub arm wrestler. He talks in a rush, swearing up a storm when he’s excited, which is pretty much all the time. You won’t find him doing cable TV cook-offs or promoting himself much on social media (he’s composed four tweets in the past three years). Instead, he’ll proudly tell you, he’s a “fucking hard worker” who arrives before dawn and sometimes works straight through to the following morning. I’ve spotted him scrubbing pots at Chabrol like he’s still that kid in Vancouver. He took full ownership of Cava in 2014. He makes a terrific paella and whole roasted fish, but my default order is one of each of the pinchos, especially a little toast of blue valdeón cheese and sherry-roasted figs; the foie gras–chicken liver mousse with gherkins and buttery toasts; and the slow-roasted pork shoulder, crispy but still rippling with fatty deliciousness and quite possibly the best pig you’ll get anywhere in town. And don’t pass up the papas fritas with sage, served in a cone that’s suspended at face height from a ringed stand a server screws into a hole fitted into the table. Those fries, and that silly stand, are the object of serious devotion among Cava-philes, who’d revolt if they disappeared.

A more predictable entrepreneur would spot a formula worth replicating in a chain of Cavas. Instead, a couple of years ago, Penfold and his business partner, Niall McCotter, chose to open a bistro in Yorkville, which is like introducing another bar into King West. But Chabrol stood out, mostly because Penfold is a whiz at French classics—he learned under his mentor, the late Claude Bouillet, at Pastis. He devised a menu that’s equal parts light and rich, both guiltless and guilty treat. I’ve had a steaming stew of turbot, red snapper and cod in a golden saffron broth that’d lift the most dour mood, and a tarragon-laced quiche with a porcelain-thin crust. And he’s perfected a gratin that’s seemingly equal parts potato and gooey cantal. I sometimes go just for a correctly chilled glass of wine, and a tart of puff pastry and caramelized apples served with a pitcherful of whipped-to-a-froth sabayon.

What I like most, though, is how secluded and special Chabrol feels, the entire place just a handful of tables and a minuscule open kitchen. The clincher is the alleyway patio where there’s ivy climbing the walls and a general sense that you’re welcome to linger, except for one night last summer when a surprise storm hit and everyone huddled under a sagging awning, more amused than damp, wishing cigarettes were still a thing. While no one would ever mistake Yorkville for Paris, Chabrol has the right accent.

The atmosphere at Atlas—Penfold’s newest effort—is similarly calibrated. The restaurant is also small—just 28 seats—with hurricane lamps greeting you at the door, fretwork panels running up the two-storey-high walls, hardwood tables recycled from Cava’s old bar, and Paul Simon and Grace Jones jockeying on the stereo. It’s brand new but already feels like it’s always been here. Many chefs spend an entire career failing at one style of cooking—Penfold has mastered three. Morocco hooked him when he took the ferry to Tangier from Spain during one of his frequent research trips and fell in love with everything he ate. At Atlas, named for the mountain range that forms a jagged wall between Morocco and the Sahara, the menu, much like at Cava, is split between snacks, salads and larger plates, everything intended to be shared.

My favourites of the smaller plates are a sweet, sticky dip of ground toasted almonds, honey and argan oil, to be spread on a chunk of pan-fried semolina cake; a golden phyllo cigar stuffed with braised hen-of-the-woods or king oyster mushrooms, with a green, tongue-tingling harissa made from spinach, parsley and serrano pepper; the jben, a tangy fresh cheese that Penfold makes with buttermilk instead of the more traditional goat’s milk; and springy, Ping-Pong-ball-size kofta of hand-chopped sardines, their supreme fishiness mellowing in a broth of stewed tomatoes and celery. The cocktails and wine list are overseen by Chloe Lord, Atlas’s GM, with a tilt toward Spanish sherries, vermouths and big-character wines that can stand up to bright Moroccan spices and stews. The most divisive option at my table was a tagine of bone-in goat. Goat is a rarity in Toronto, outside of roti shops, curry houses and home kitchens. Most I’ve had has been tough, gamey and about as appealing as chewing on a mop. But Penfold’s version corrects matters: he slow-roasts it for four hours in a hefty clay Römertopf—which traps the steam and transforms the meat into pure tenderness—and serves it in a cumin- and coriander-laced stew of okra, squash and chickpeas.

This summer, Penfold cooked at some of Brazil’s Michelin-starred restaurants as a culinary ambassador. He was stunned by Rio’s tropical, torrential rains and impressed by the cooks he met, whose hardships reminded him of his past. He couldn’t believe how, the week before he arrived, one of his Rio friends was mugged for her knives in front of the restaurant. He called me from Rio before leaving for more adventures in São Paulo, and shared his belief that North Americans, and Torontonians especially, don’t place enough value in the ritual of stopping everything and sharing a meal. We eat at our desks, in front of our TVs, thumbing our phones instead of facing one another. “There’d be so many fewer problems in the world if everyone took the time to talk during dinner,” he told me. That’s the not-so-secret agenda of his transportive restaurants and their menus of sharing plates. The chatter in the dining rooms suggests he has three reasons to be optimistic.