Come From Away has landed on Broadway with eerily perfect timing: just as New Yorkers are reeling from a president who wants to ban travel, build walls and put “America first.” The soaring musical, by Toronto’s Irene Sankoff and David Hein, is everything Trump isn’t: large-hearted and inclusive. It tells the true story of how the tiny town of Gander, Newfoundland, took in 6,579 stranded foreigners after their planes were diverted from U.S. airspace in the wake of the 9/11 attacks. 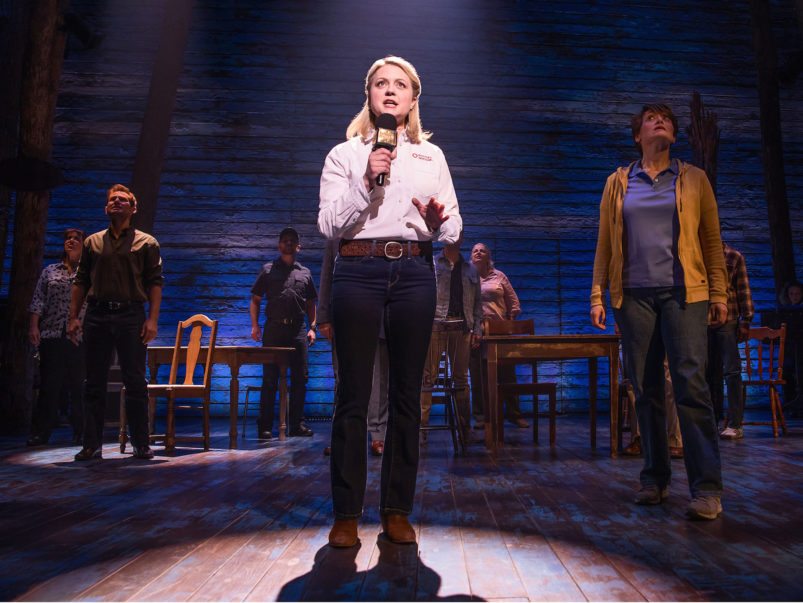 A huge hit in Toronto during its pre-Broadway run, the show opened in New York on March 12 to a tidal wave of glowing reviews—the New York Times called it “the catharsis we need.” To top it off, Prime Minister Justin Trudeau attended the opening—along with, ironically, Ivanka Trump—and gave a rousing curtain speech. We spoke with Hein and Sankoff from New York, still basking in the afterglow.

When Come From Away premiered in 2015, it seemed like an antidote to the terrorism rocking the world. Now, with Trump trying to keep Muslims out of the U.S. and refugees pouring into Canada, it’s even more relevant.
David Hein: I know. This show used to be a historical piece about how Newfoundland responded to a specific tragedy. Now it has become so much more. It’s about how we can come together; it’s about human kindness and remembering how good we can be.

It’s thrilling enough to open a musical on Broadway, but then the Prime Minister showed up. How did that happen?
Irene Sankoff: We’d been reaching out to the Prime Minister for a while, asking him to come and see the show, but they didn’t give us much notice! When word got out, there was a lot of excitement, not just from Canadians but Americans, too—possibly more so. They wanted to be in the audience that night just to get a glimpse of him.

You couldn’t ask for a better ambassador for your show.
DH: It’s a wonderful story about cross-border collaboration and international friendships, and it ties in nicely with a lot of his messaging.

Of course, Ivanka Trump was also there.
IS: We didn’t know about that until the day of. They brought her in through the stage door. I tried to avoid staring at her, but during the curtain call, I couldn’t help myself. I turned around just as she was clapping and mouthing the words, “That was so great!” So that was a moment—for whatever it’s worth.

Unfortunately, her dad didn’t take up the PM’s offer to see the show.
DH: There was a Washington Post article about debate in the White House over whether he should attend or not. Surely there are better things for them to debate than that. But everybody is welcome to see it. The story behind the show has inspired us and we hope it will inspire others.

What went into telling that story? You went to Gander, right?
DH: Yes. We started researching it several years ago and found out there was going to be a commemoration ceremony happening, that all these people were going to be travelling back to Gander to reunite on the 10th anniversary of 9/11. So we applied for a Canada Council grant, went out there and ended up staying for quite a while. The people of Gander wouldn’t let us stay in hotels—they’d say, “Don’t be spendin’ money, stay with us, here are the keys, just remember to feed the cat.”

Were you thinking “musical” at the time?
DH: We had originally been thinking of doing it as a documentary play like The Laramie Project, [which is about the murder of a gay university student in Wyoming]. But then they had a benefit concert at the hockey arena, with this Newfoundland band, and everybody got up on the floor and started dancing. That’s when Irene realized it should be a musical. We weren’t trying to make a Broadway show, though. We were trying to be true to the story. What we really wanted was for the people we’d interviewed, when they sat in the audience, to be proud of what they were seeing and to say that we got it right.

How did you compose the songs? Did one of you write the lyrics and the other one do the music?
DH: We shared everything. We’re a married couple, so we can’t keep out of each other’s business.

You performed the show in Gander last fall. What was that like?
DH: We may have been the first to bring an entire Broadway show to Newfoundland just to do a benefit concert, and certainly the first to play the Gander hockey arena. It was an incredibly emotional experience.

Do you have another musical in the works?
DH: We have a couple of irons in the fire, but Come From Away has been happily eating up a lot of our time and focus. We also have our three-year-old daughter, Molly, who we’re hoping to spend more time with. She’s grown up with the show—she got her first tooth and said her first words in Newfoundland.

What are you hoping people in New York will take away from the show?
IS: What I want is already happening before my eyes: after the show, strangers leaving the theatre are hugging each other or talking to people they have just met. It’s always been a question of mine whether theatre can change the world, and I certainly think we have been changing some people’s worlds with this show.

Dear Urban Diplomat: I’ve been living rent free at my sister’s cottage, but she keeps making me run errands