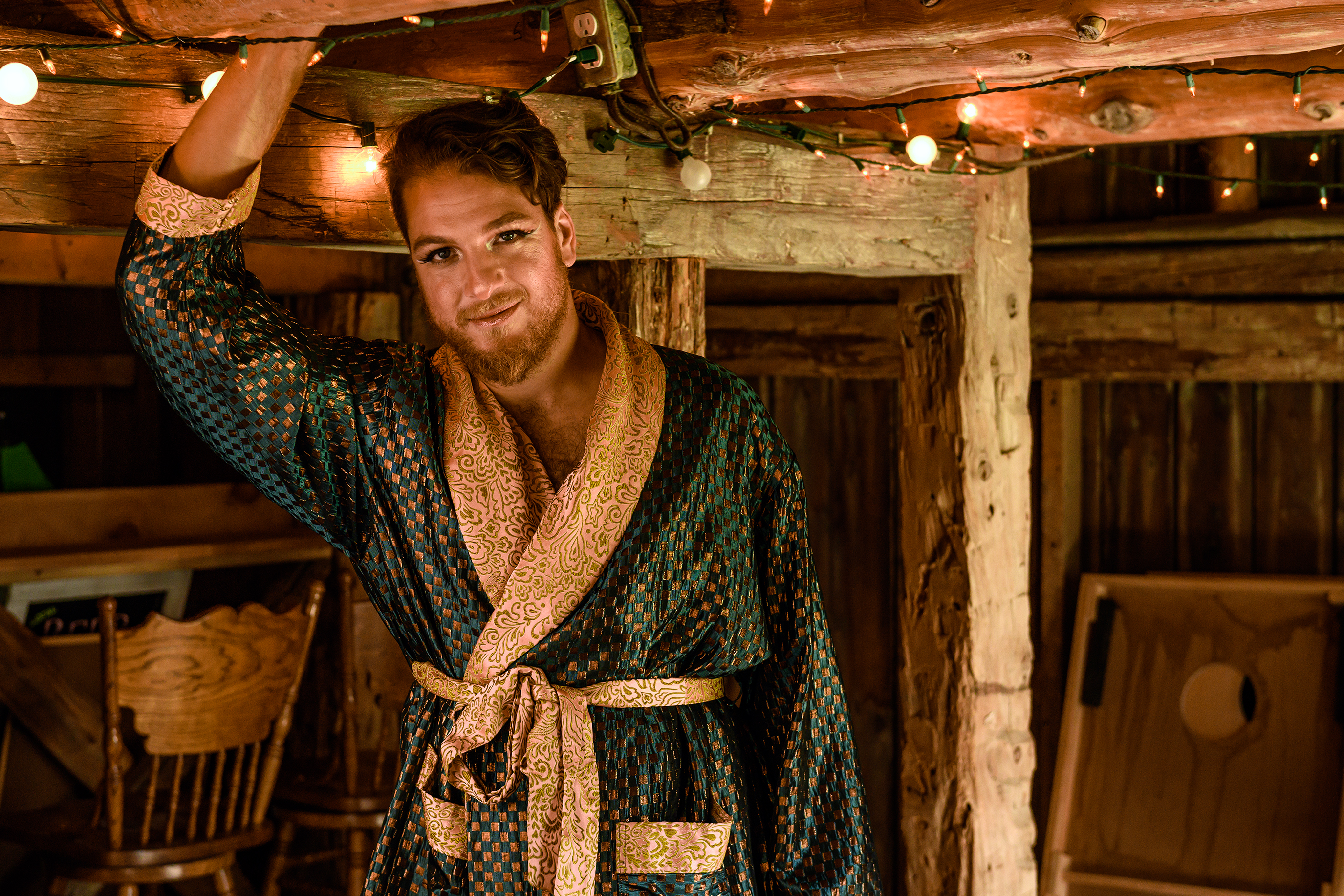 Ben Paley is the founder of BoylesqueTO, one of Canada’s top burlesque troupes. Before the pandemic, he spent 100 plus days a year artfully undressing in venues all over North America. When Covid put the kibosh on his career opportunities, he opted to embark on a new stage. Last winter Paley and his partner, Marijke Bouchier, bought The Hayloft Dancehall (@the_hayloft_dancehall), a converted-barn-slash-event-space in Prince Edward County. Now they’re bringing fun (and exposed flesh) to the county. Paley told Toronto Life how it all came together.

“I’ll never forget the first time I saw a burlesque show. I was 16 years old and visiting my uncle in New York. My parents were sort of conservative, but he was the fun uncle, so he snuck me into a bar on Coney Island to see a show. It was so cool to see performers totally abandon their inhibitions, out there on stage literally naked. It was so sex positive and frank and political. I was living in Baltimore at the time; when I moved to Toronto for university in 2005, I began checking out burlesque shows regularly. One night, after I’d been living in the city for a couple of years, I was walking by the Gladstone Hotel and out pops this drag queen. She was like, ‘Hey there, tight pants—are you going to come in and see our show?’ I did, and by the end of the night, the drag queen had pulled me up onstage for an impromptu performance. I didn’t have any props, so I started playing with my belt to tease the audience. I was wearing frumpy grey underwear, but I did it anyway. They whole experience was terrifying and yet exhilarating.

“At that point, there weren’t a lot of male-identifying performers in Toronto’s burlesque scene. I wanted to change that. I put out an audition notice on Craigslist and connected with other people on Facebook and at queer performance nights. In 2007 I launched BoylesqueTO. We’re a rotating group of performers who play with masculine identity and tropes. I gave myself the stage name of James and the Giant Pasty. In one act, I play a lumberjack who eventually strips down to a plaid bikini. In another routine, set to the Backstreet Boys, we start out as a group of basic dads with strollers in a park—and by the end we’re leather-bound daddies. For the first 10 years or so, it was more of a passion project than a job; I did shows on the side while running a personal training business. But then in the last few years I had started to book more shows and my side hustle became a full-fledged career. I played 100 shows in 2019, and I was about to head out on a 30-city U.S. tour in March of 2020 before Covid stopped everything. My partner, Marijke, is an artist and illustrator, and for the first few months of the pandemic we both worked hard to transition our businesses to online platforms. She sold her pieces through her website and I did online shows. It was great to perform while the world was in lockdown, and we had a great response. I was getting viewers from as far afield as Edmonton and Orlando. But we were only doing a couple of shows a month, and it wasn’t enough.

“I started thinking about what other opportunities might be out there. I always dreamed of running my own event space. When I was a performer out on the road, I saw so many different venues and ended up with a checklist of how I would do it if I had my own space. I had always imagined a place in Toronto dedicated to cabaret performance. I figured it would take about five or 10 years to get off the ground, but when Covid hit, I thought it might be a good time to get a deal on commercial real estate. I started looking around in Toronto and realized pretty quickly that I was out of my league—spaces were selling for $2 to $3 million, even during the pandemic.

“By August, I’d all but abandoned the idea. Then I saw that The Hayloft was up for sale. It’s an old barn in Prince Edward County that has been running as a down and dirty country dance hall for more than 50 years. In 2014, Shawn Creamer, former owner of the Dakota Tavern on Ossington, bought it and gave it a makeover. It’s still a barn—a century-old wooden structure with knob-and-peg wood beams, a tin roof, that classic red weathered exterior. When Shawn bought it, he built a new stage and started bringing in cool music acts from all over Canada. We fell for the place quickly. We loved that the season only runs from Victoria Day to Halloween, and there’s an idyllic lakeside cottage next to the barn. The whole property is about two acres. I wanted to put in an offer right away, but Marijke made me sleep on it. 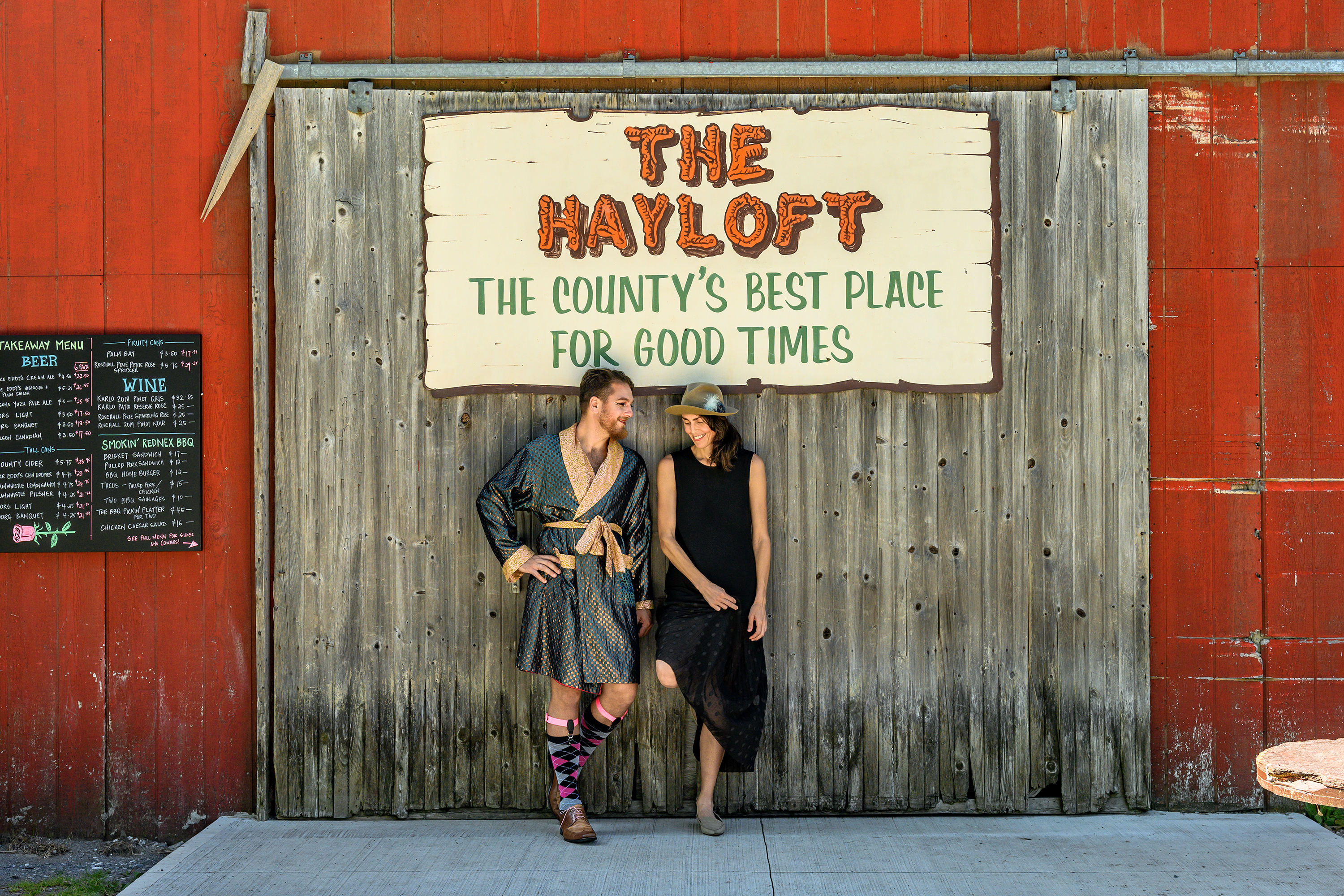 “We decided it was the kind of opportunity that wasn’t going to come up again, and we were fortunate enough to be in a position to make an offer. In December, we bought the place for with the goal of venue bringing in burlesque and drag and all sorts of other queer entertainment. We didn’t make too many changes. Shawn had already installed hundreds of white fairy lights, which give everything a soft, romantic glow. Most of our work went into the kind of add-ons required for cabaret acts: an expanded green room, lighted mirrors for makeup, a stage door for performers. We’re dividing the work—Marijke liaises with musical acts and handles marketing, merchandise and social media. I’m focusing more on the burlesque, drag and day-to-day operations. I had always imagined something dedicated exclusively to cabaret, but Marijke was really excited about booking music as well. So we’ve got a nice balance between musical acts and events like drag, burlesque, and comedy.

“I admit I was a little nervous about how it would all go over. In Toronto, you can’t walk down the street without bumping into a drag queen, but out in the county we didn’t know how people would react. So far we’ve received a warm reception. We did a soft launch in late July, with a cover band called Borgin and Benni. We had to bring in a lot of seating and set it all up to fit with regulations. We installed a few new fans for ventilation. We even spent $2,000 on a big sheet of plexiglass to separate the stage from the audience, but we consulted with our public health representative and it turns out we didn’t have to use that. 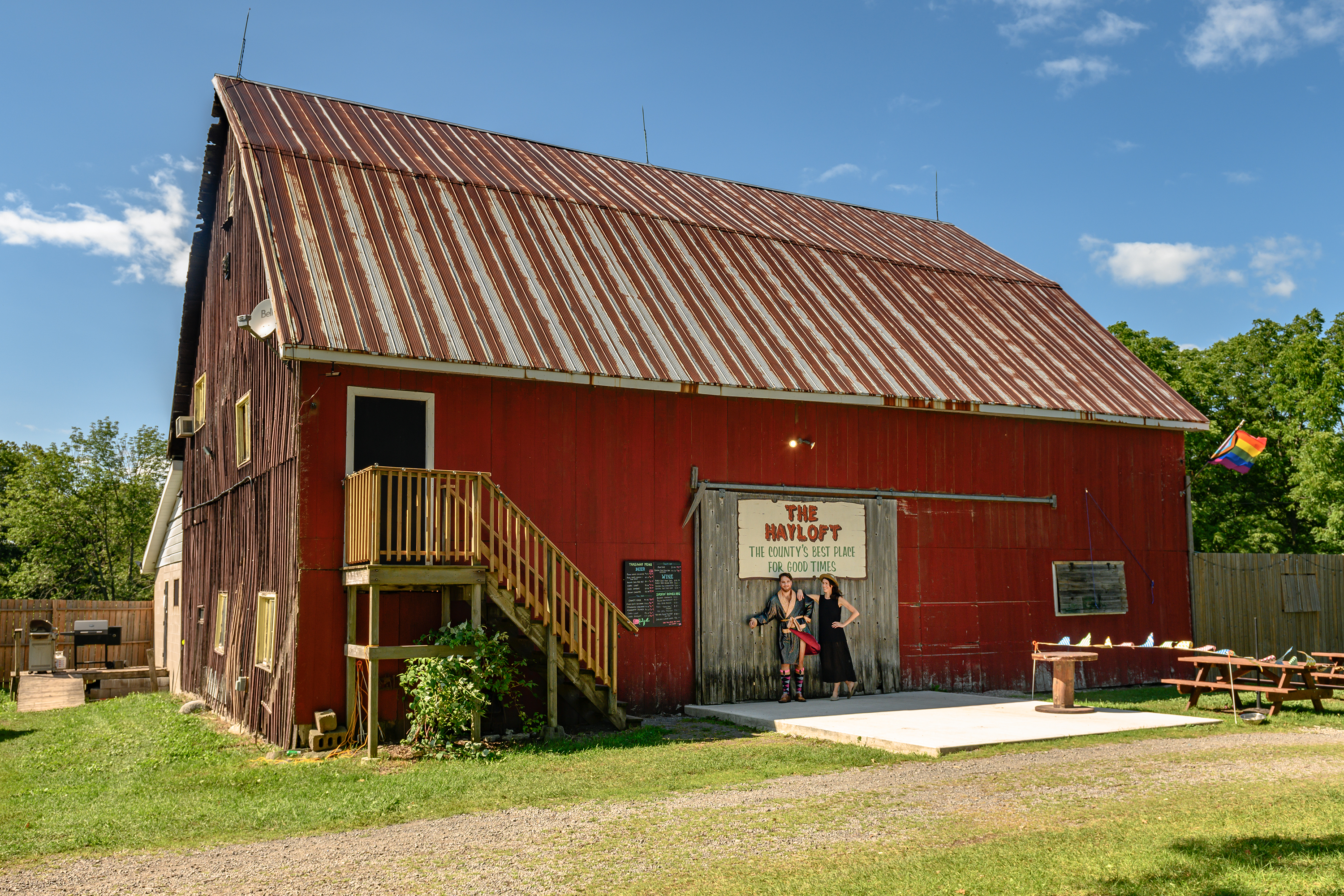 “Our first couple of shows were quiet, but our second weekend was sold out, albeit at limited capacity. We had Serena Ryder perform on the Friday and Saturday and we did a burlesque show on the Sunday. I was the emcee, which means I got to introduce everyone and explain a little bit about what we were doing and my dream for the venue. I wore a bedazzled jacket, a bowtie, black and white saddle shoes with socks and sock garters and a sparkly thong. I did a performance dressed as a construction worker, set to The Beatles’ ‘Why Don’t We Do It In The Road,’ and people really seemed to enjoy it. It was totally surreal, not just to be performing live again, but to be doing it in a place that I owned.

“BoylesqueTO makes its Hayloft debut on September 3. Of course, now when I’m performing, I’m also thinking about the leak in the bar sink or fire safety requirements. But there are moments when I’m looking up into those 100-year-old barn rafters and can’t believe we have managed to fulfill our dream. At this point we’re barely breaking even, but next summer, we’re hoping to turn a profit. Most of all, I’m waiting for the day when we can get back to full capacity and host big sweaty dance parties.” 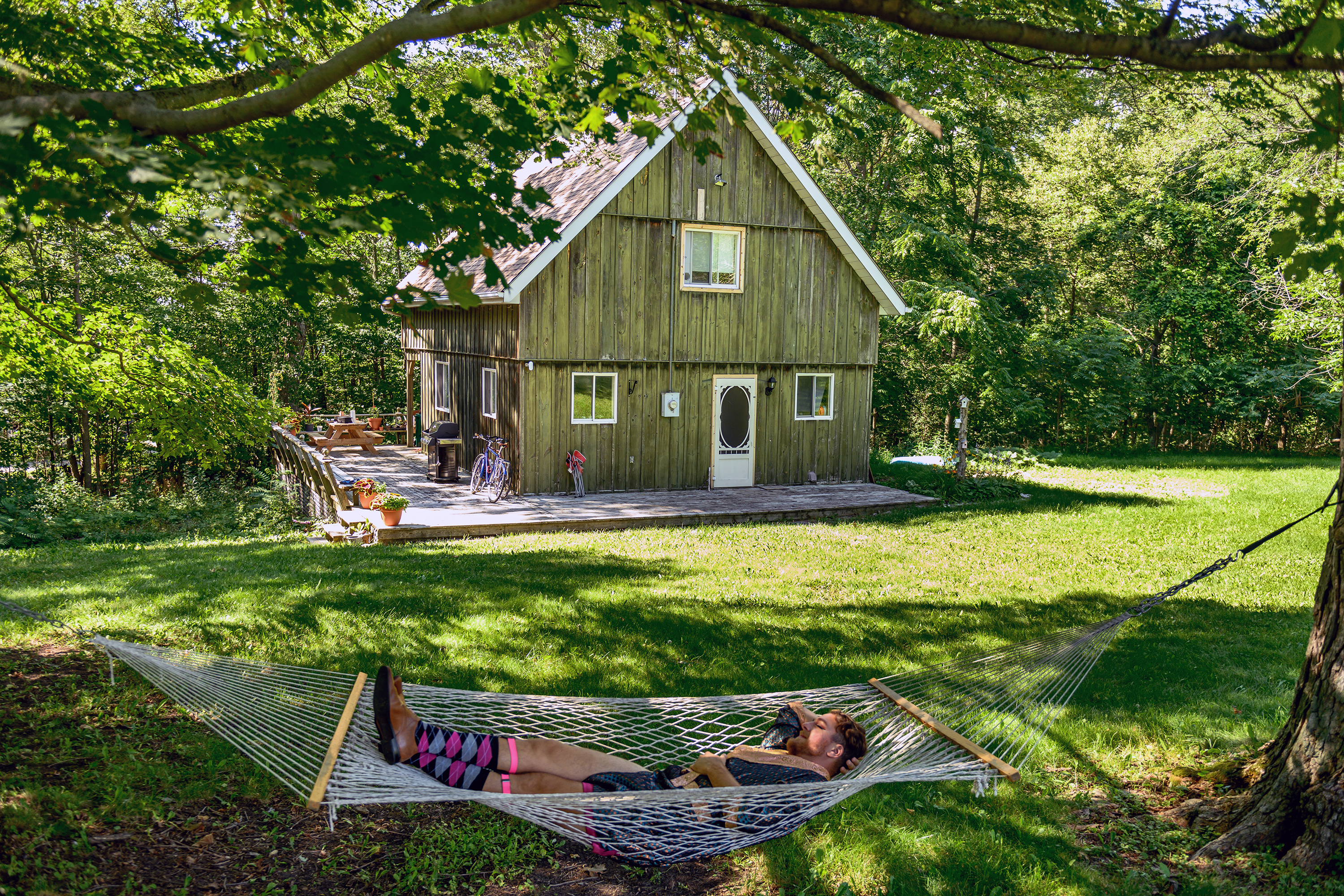