“Suddenly I forgot all about Covid. I was just thinking about my baby”: What it’s like to have an emergency C-section during a pandemic

“Suddenly I forgot all about Covid. I was just thinking about my baby”: What it’s like to have an emergency C-section during a pandemic 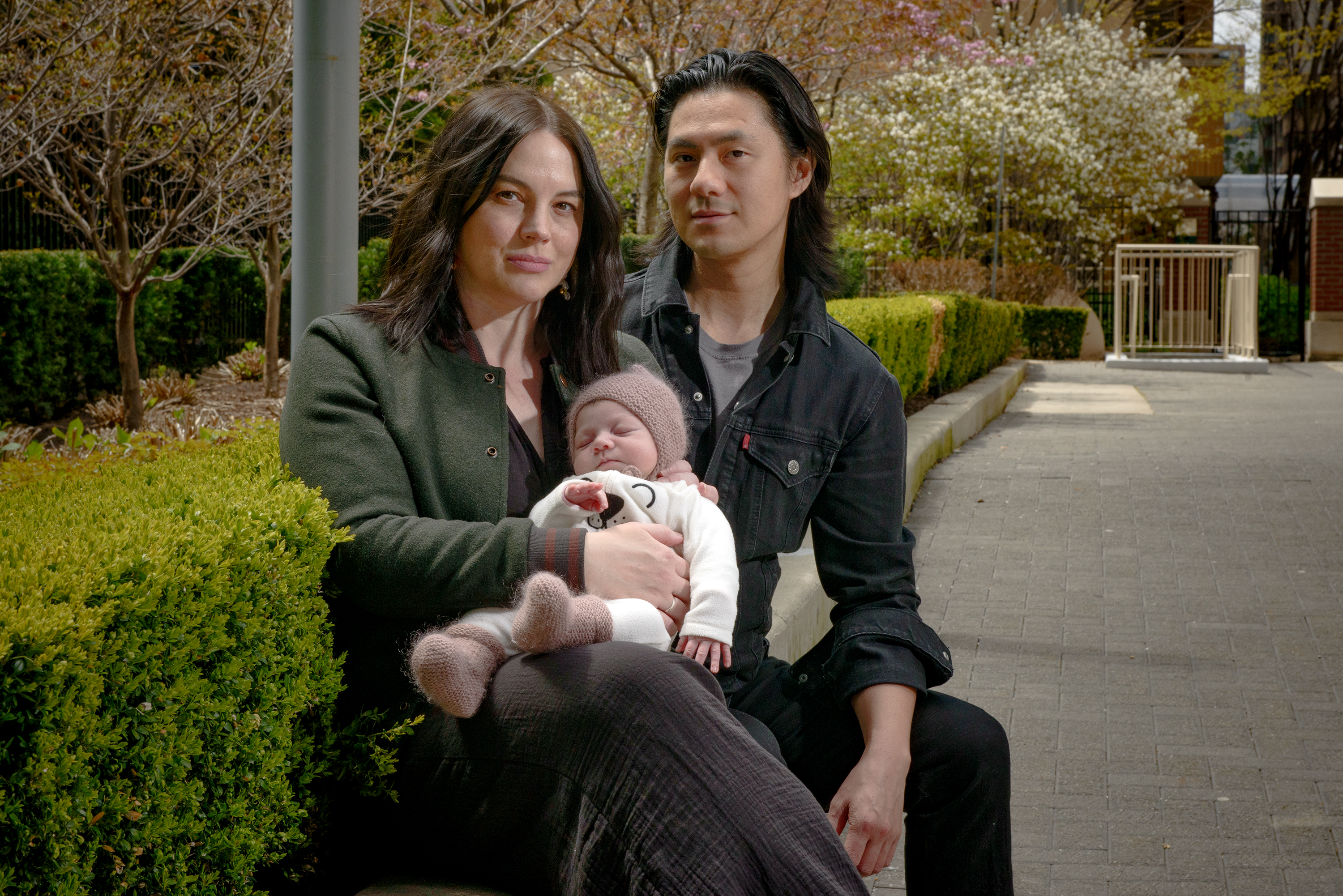 My pregnancy was challenging from the start. I couldn’t eat spicy food because it made me sick. Even juice was too acidic for my stomach to handle. Long before we had our first Covid case in Canada, I was extremely anxious. My due date was April 8, and I didn’t know whether it would hit here before or after I gave birth. I watch CBC every morning while I drink my coffee, and I remember seeing how badly the virus was affecting China. I thought, It’s going to come for us; I don’t know when, but it will.

In the weeks leading up to lockdown, I spent hours researching. I couldn’t find anything online about how the virus affected pregnant women or babies, and that made me even more afraid. I stopped sleeping through the night, partly from anxiety and partly from the discomfort of having an enormous belly. At night, I’d wake up every hour or two, staring at the ceiling and playing out worst-case scenarios in my mind. By then, some New York hospitals had banned partners from the delivery room. I was already terrified of giving birth; the idea of having to do it alone was horrifying. My dad and my future mother-in-law are over 70, so I was scared for them, too. I think I was most afraid of the uncertainty, of how much we didn’t know. My sister is a biologist and her fiancé is a doctor, so I talked to them about how I was feeling. They were circumspect, but they were concerned, too.

I’m a freelance writer, so I’m used to working from home with my 11-year-old Yorkshire terrier, Bun, who I jokingly refer to as my other child. My partner, Arthur, works for a start-up as a video game producer, and thankfully his employer took the virus seriously right away. His company implemented work-from-home measures the first week of March, before the official directives came down. We live near Bloor and Church, and his boss didn’t want people feeling like they had to take the subway to work.

Throughout March, I kept thinking, How are the hospitals going to handle this? Will I be exposed to Covid in the hospital? I still planned to give birth at Mount Sinai—I grew up around doctors and trusted them—and my doctor reassured me that it would be safe. My baby was huge at eight and a half pounds instead of the average seven, so I had an induction scheduled a week before my full term, on April 1. But then I started to hear about elective surgeries being cancelled, and, when the government issued the work-from-home order, I got the feeling they were going to cancel my induction, too. By that point, Arthur wasn’t allowed to come to ultrasounds with me anymore, either. He was sad about missing our final two—they’re exciting because you get to see what your baby looks like in real time. A picture just isn’t the same.

My sister was supposed to come from Calgary to Toronto when our baby was born, and she cancelled her trip. Even if she had been able to come, the rules at the hospital had changed, and I was only allowed to have one other person in the birthing room with me, plus the necessary doctors and nurses. I chose Arthur. In the meantime, as expected, the hospital cancelled my induction for April 1—they deemed inductions non-essential until 41 weeks, so we rescheduled for April 16. Every day, I felt more fearful. I just kept getting bigger. It was hellish by the end: I wasn’t comfortable in any position, and I couldn’t do anything for longer than a few minutes. I was still hoping for a vaginal delivery, but I didn’t know how that was going to be possible. As my due date approached, I coloured my hair at home. I refused to give birth with grey hairs!

On the morning of April 10, I’d just finished my morning coffee when I went into labour. The first two contractions felt like intense period cramps, but by the third one I was on the floor in the fetal position, writhing in pain. We timed my contractions for an hour, and when they were eight minutes apart, we got into the car and flew through the city’s empty streets. It took us 10 minutes to get to Mount Sinai; we got parking right away because all the elective surgeries and appointments had been cancelled. I’ve never seen a hospital parkade so empty.

When we arrived at the door, we were greeted by people in face shields and gowns. It was apocalyptic. They were screening everyone at the front entrance. They asked us a few questions—”Do you have a fever? Do you have a cough?”—and told Arthur that for safety reasons he’d only be allowed to leave the hospital once, to get the car seat for the baby. It was eerie to see the lobby completely empty. We took the elevator up to triage, where I passed my admission papers and health card through a tiny slot between two panes of glass to a person in full PPE on the other side. We’d brought masks in case the hospital was crowded or if we encountered someone who was infected.

Twenty minutes later, at around noon, they took us to the birthing room and gave me an epidural. Suddenly I forgot all about Covid-19: I was just thinking about my baby. For eight hours we monitored the contractions and the dilation. Arthur is one of those people who needs to eat constantly, so we’d packed energy bars, crackers and juice boxes. He snacked the entire time, and I took a few bites here and there. By 8 p.m., I’d started pushing. At first, everything was normal. The doctor broke my water, and the nurses were encouraging, but the baby was not moving. A nurse put me in a few different positions but nothing helped. By 10, I was still pushing, and the baby was still stuck—two hours is a long time for nothing to happen. I was exhausted, my hair stuck to my sweaty forehead.

Finally, my doctors told me I was going to have an emergency C-section. I’d never had major surgery, so I was terrified. In my prenatal class, they’d shown us a video of a C-section; it looked awful. They’d have to cut through all of the layers of my abdomen. It would take weeks to recover, and it might take months to get the feeling back in my stomach after the nerves were severed. This wasn’t part of my birth plan. But I’d been in labour for so long at that point that I just wanted it to be over.

Within minutes, they rolled me into an operating room. I hazily remember an anesthesiologist telling me they were putting a mask on me to protect against the virus. Our daughter, Olive, was born at 10:53 p.m. I remember watching them hand her to Arthur and thinking, How is she so cute already? She was instantly the cutest thing I’d ever seen. 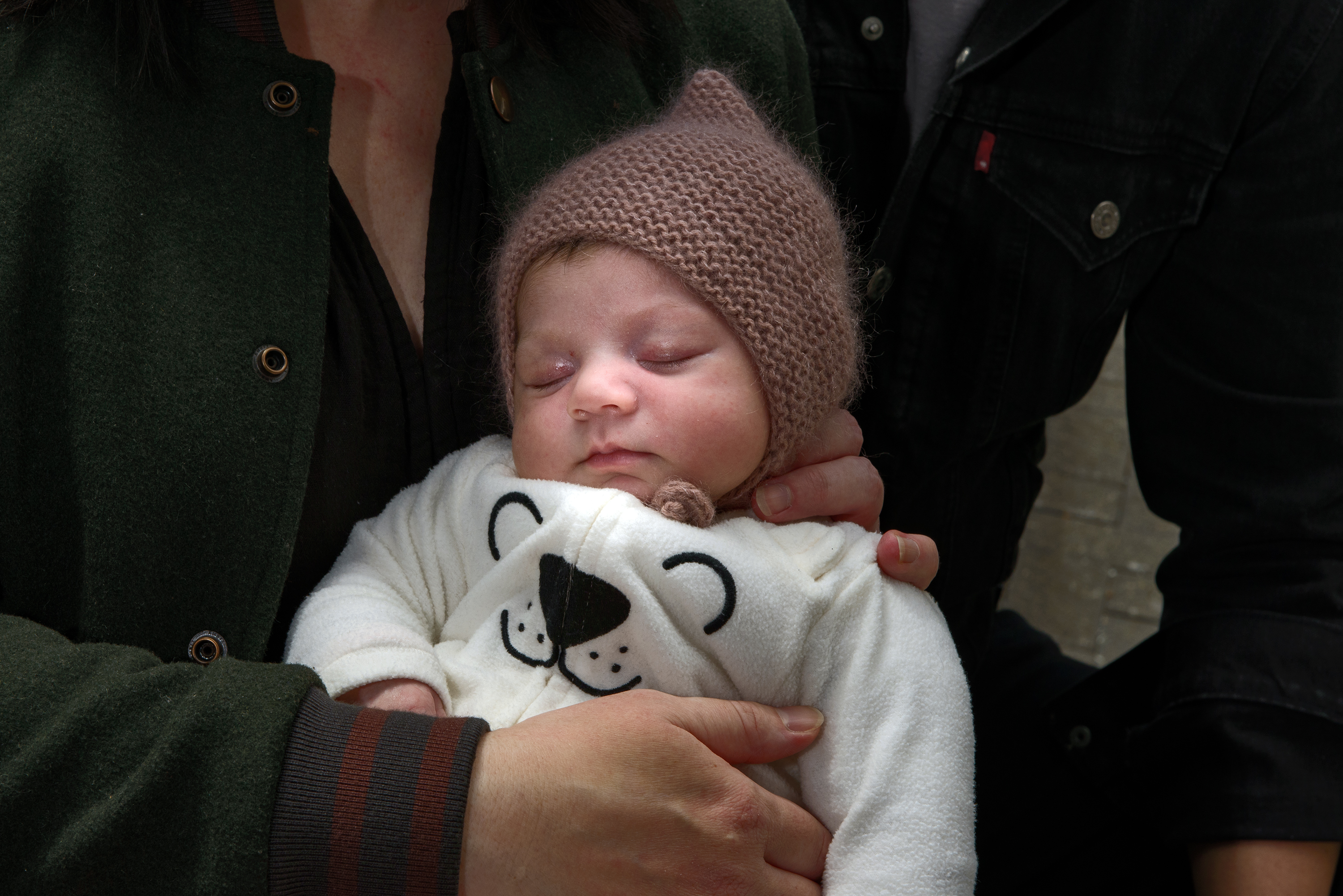 We stayed at Mount Sinai for two nights, and at first I was concerned we’d be put in a room with other people without enough space for safe social distancing. But it turned out okay: we ended up sharing a room with another couple who’d just had a baby as well, and the beds were at least five metres apart, with plenty of room. Aside from the doctors and nurses wearing masks and keeping their distance, it felt almost normal.

When we got back to our condo, I started to realize how much Covid-19 was going to affect our lives as new parents. It’s important for my surgery recovery that I’m mobile, so I take Olive for walks, but it’s unnerving. Some people don’t understand social distancing, or choose to ignore it, and get too close to us. That terrifies me. I’m more worried for the baby than myself. We had trouble getting supplies, too. Olive is formula-fed, and we go through three crates a week. When we went to Shoppers Drug Mart to get some, the shelves were cleared out. They only had one pack. I hate that we’re relying on Amazon for diapers and formula, but they deliver quickly, and the baby can’t wait. At first, we ordered diapers and the delivery time said 30 days; I almost fainted. I was imagining us borrowing a friend’s car and driving all over the city, desperate for diapers. Thankfully, they arrived within a week.

Last week, Olive had her first visitor, though she slept through the whole thing. Arthur’s mom came down from North York to visit her in front of our condo building, keeping a safe six-feet distance the whole time. But I was counting on having my sister here, and it’s been tough without her. She’s been so excited about the baby, mailing me clothes and wanting updates at every step. She bought most of Olive’s wardrobe.

I ordered some treats for Mother’s Day from Eataly that I couldn’t eat while I was pregnant: soft cheese and prosciutto. We celebrated with mimosas and a walk around our neighbourhood. It’s not exactly the Mother’s Day I had in mind, but we made the best of it. We used to take our dog, Bun, to the Beaches every week last spring and summer. He loves to swim. Honestly, all I really want is to go to the boardwalk with him, Arthur and the baby, and take a nice walk without having to worry about dodging people. It’s my favourite place in Toronto, and I can’t wait to take Olive there, too.