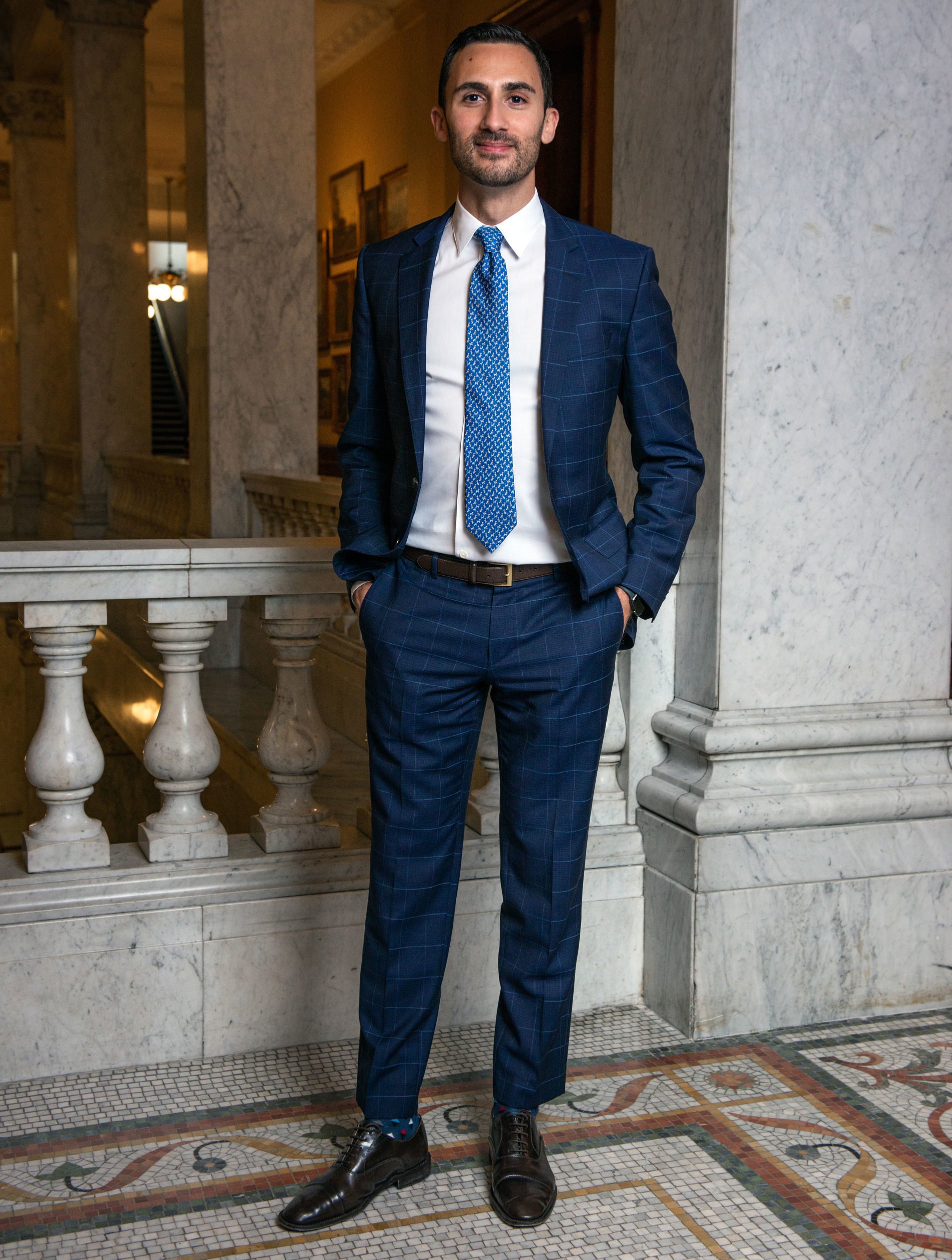 In a time of cutbacks, being named education minister comes with a significant downside: you become public enemy number one for some 160,000 teachers. Did you at least sleep on it?
I accepted with great excitement. Notwithstanding the negative aspects you cite, being a champion for the economic interests of two million young people and supporting diversity and inclusion is something that excites me.

Where and when did Doug Ford ask you?
In late June. I was at a constituency event in Vaughan and was pulled aside and told I had a call. When I saw it was a private number, I knew it was either my father or the premier, and I always take calls from both. The premier asked me to meet him in his office under the guise of a professional development discussion. When he made the offer, I was overwhelmed and humbled and also a bit sad. About a month earlier I had lost my mother and I realized that she wouldn’t be here to see it.

Education is a thorny file. Did you name any conditions before accepting?
No, I simply alerted him to the fact that I am an opinionated and proactive person. He seemed to want that.

You were most recently Ford’s parliamentary assistant, which means you spent a lot of time at his side. What’s something people don’t understand or get wrong about him?
How inclusive he is. He doesn’t give a hoot about your faith, sexual orientation, income, birthplace or skin colour. This summer, I asked him to walk with me in the York Region pride parade and he accepted immediately. That was a mythbuster for me.

You attended the private St. Michael’s College for high school; you have no kids. With respect, why does it make sense for you to be in charge of public education in Ontario?
I’m also a proud alumnus of St. Margaret Mary Catholic elementary in Vaughan, I have nieces in the public system and I am an unabashed, unapologetic defender of public education. I’m also 33 and take a generational lens to how public policy impacts young people, which has not been the historic norm in cabinet.

The average class size at St. Mike’s is 23; you came to the negotiating table with teachers pushing for 28. Is there some degree of hypocrisy to that?
This is a challenging question. I would say that our position with respect to average class size was negotiable. But that spirit of reasonableness must be matched by the other parties. You can’t have one entity being flexible and the other unwilling to change their opinions at all.

You recently came to an agreement with CUPE. Did someone train you in the art of negotiation, or are you going on instinct?
I depend on good advice and my own judgment.

I thought you might mention a negotiating course you took a few years ago.
Yes, at the University of Windsor—thank you for reading my LinkedIn profile, which hasn’t been updated since the election. I’ll need to get on that.

Who is your negotiating patron saint?
I chart my own course, but I’m informed by capable public servants like John Baird and Gary Doer.

What’s the first rule of negotiating?
To know who you’re fighting for.

And a big no-no?
Setting red lines, as some unions have done regarding expectations for higher compensation.

Your parents came here from Italy in the 1950s. How did they meet?
In high school in Toronto. My mom came through Pier 21 in Halifax then moved to Montreal. My dad came through Ellis Island and took the train north to Toronto.

What did they do for work?
My dad drove a truck in his early years and then was an entrepreneur who started his own business. My mom worked as a public servant in administration in the Ministry of Transportation. She would wake up at 3:30 a.m., go to work then take my brother and me to hockey and swimming.

What did they say when you expressed an interest in politics?
They weren’t surprised. They’d endured hours and hours of dinners with me talking politics. They saw it was clearly my vocation and were happy I’d found it early in life. Today, my dad is excited to see the rough and tumble of it all and proud to see his son try to make a difference.

Do you have any teachers in your family?
Cousins and aunts, yes.

Do they give you grief at family dinners? Do they tack on “…and please Lord don’t let Stephen put me out of work” at the end of grace?
My family is very supportive, but they’re also frank and give perspective that is always helpful. I value what they do and I see it firsthand. They work hard and care profoundly about their students.

Whom do you consult for guidance?
My dad remains my north star, but I benefit from the perspective of politicians who’ve been in the trenches and really want to make a difference.

Do you have a significant other?
I do not.

You were student council president at the University of Western Ontario, so you know firsthand how vital funding is for quality of life on campus. Is it hard to be a part of a government cutting back so drastically on student programs?
At Western, we advocated for affordability federally and provincially but didn’t really get anywhere with the Liberal government at the time. I think that what this government has done, which is a 10 per cent tuition cut, is not insignificant.

Before you’d even graduated from Western, you landed a job with Stephen Harper. How did you do it?
I was involved with the Canadian Alliance of Student Associations, an advocacy group for post-secondary affordability. Our executive director was able to get a meeting with the prime minister, in which a few of us were deputized to inform him about our priorities. As I understand it, he was at least modestly impressed with how I articulated my values. He also saw, in my instance, a socially moderate, fiscally conservative young student leader—and there aren’t many of those on campus.

So he was like, “Hey! Bring that guy back in here!”
Some of his people later brought me back in for a meeting, which led to hiring. I started at the bottom of the pile, as special assistant. I worked hard and took each task seriously and delivered results for each boss along the way. That helped me progressively rise over time.

You eventually became his director of media relations.
His chief spokesperson, yes.

You were in that role during the unveiling of the so-called barbaric cultural practices tipline. What on earth was the thinking there?
My focus as a conservative is uniting our movements around economic aims. When we lose focus on that, my priority is unleashing the economic potential of individuals and small businesses.

Meaning that you weren’t a fan of that particular gambit?
I’m just asserting that my conservatism is defined by small-c conservative principles of living within one’s means, of balanced budgets, support for free enterprise, free trade and supporting the ingenuity of individuals so they can achieve their potential.

Let me try again: did you advise for or against the barbaric cultural practices tipline?
I was not involved in its development.

Your positions on fiscal policy are noted, but I’m interested to know where you, a rising star in the Conservative party, stand on social issues. For instance: gay marriage.
I support the rights of LGBT Canadians.

To marry?
Yes. And I say that not in spite of being a conservative but because I am one. I believe in equality of opportunity and in rule of law and human dignity for everyone.

Climate change.
Climate change is real, and I believe we have a duty to reduce greenhouse gas emissions to protect the environment. But I don’t think the solution is to reduce the capacity of low- and medium-income seniors and working families to be able to afford home heating.

Abortion.
I believe we should not reopen that debate.

But?
That’s my position. It’s a closed matter.

Opening up the greenbelt for residential development.
I believe in protecting the greenbelt and in enhancing conservation spaces in Ontario.

At the moment, you’re engaged in talks with the teachers’ unions. I’m wondering: during negotiations, are you physically at the table?
Sometimes I’m at the hotel where the negotiations are happening. Sometimes I’m at question period or in my riding, but I’m involved wherever I am, mostly working closely with our legal counsel. I stay in touch by phone or even text. Ultimately, the strategy is driven by me and my leadership team.

So when a proposal comes from the other side to your negotiators, where does it go?
I get briefed on the materials.

Can you sign off on a deal without Ford’s approval?
Obviously there are mechanics of government that require inputs from other ministers and from the premier, who takes great interest in this matter. But the buck stops with me.

You reunited with Harper in November. What advice did he have for you?
He urged me to use my platform to do good and to articulate in a measured way that the conservative movement and government can be a force to help achieve the success we want. He also told me to seize every opportunity, because politics can often move slowly.

Once the negotiations with teachers wrap up, what’s the plan, besides a stiff drink?
There’s not a lot of time for relaxation these days, but I enjoy seeing my family and especially my nieces. A lot of my closest friends are not political, which is therapeutic—they’re not interested in the tweet of the day or the lead question in question period. I find it healthy to be able to chill out without CP24 on in the background.

This interview has been edited for clarity.