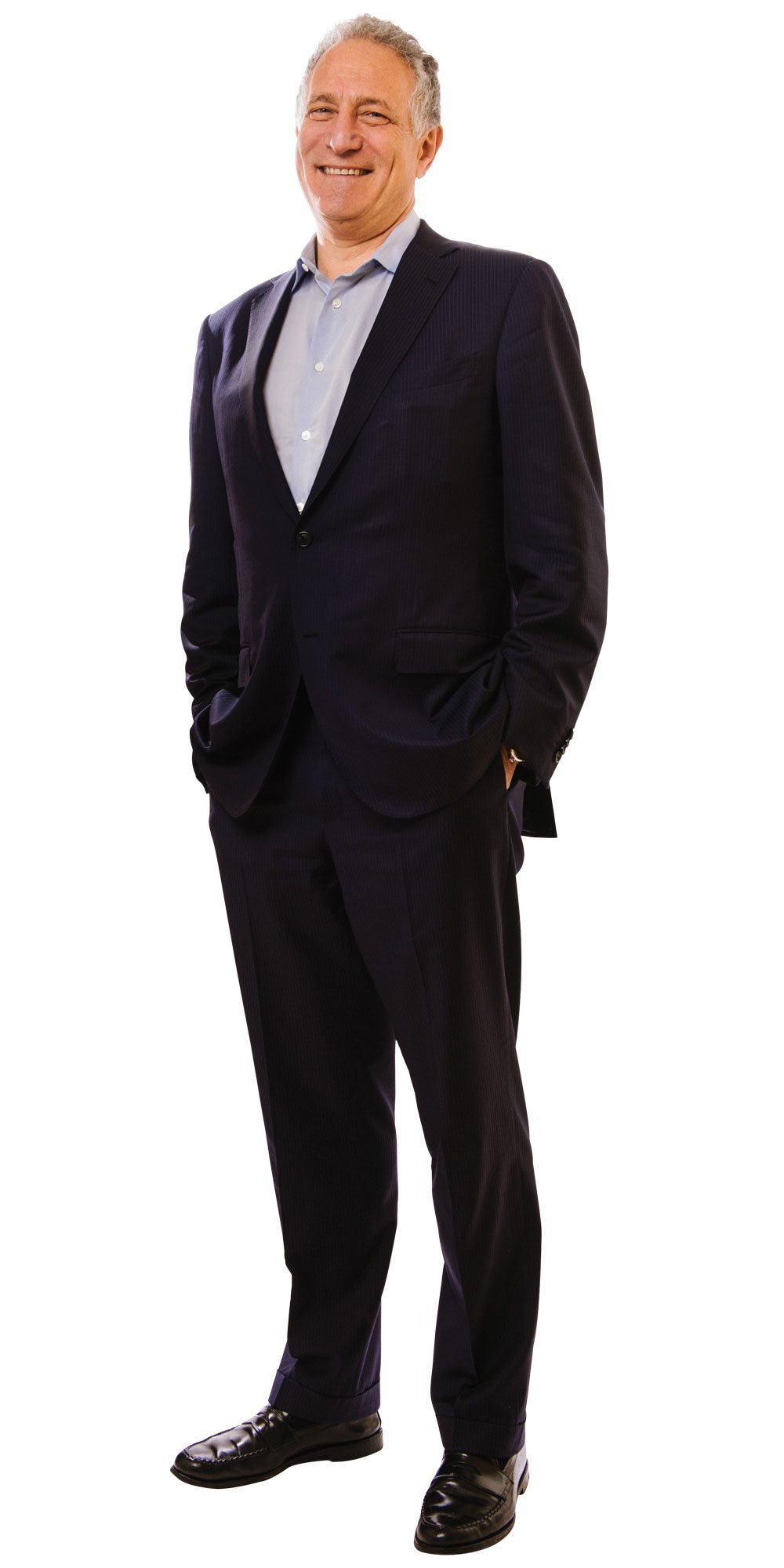 Your company, Sidewalk, which is owned by Alphabet, has kicked up quite the fuss since rolling into town last year. Please explain, for the uninitiated, what your project is all about.
Our mission is to apply technology to the urban environment to improve quality of life for residents. We’ve partnered with Waterfront Toronto to develop a 12-hectare plot of land on the eastern waterfront and try to do just that.

You’ve committed to spending up to $50 million in the initial phases. What ideas are you most excited about?
We envision a community reminiscent of a time before the car, with all of the energy on the street, people looking out for each other, children free to roam. Dense yet with lots of open space. Self-driving cars will allow us to recapture space used for parking, and we’re exploring underground channels for garbage and utilities. We’ll see, I think, flexibility of building type—commercial, residential, other—and a reduction in the cost of living of 12 to 15 per cent.

You studied 51 sites in North America and landed here. Why Toronto?
The potential on the waterfront is extraordinary, and there’s a rich tradition of urbanism and a powerful technology ecosystem here. Toronto is rapidly growing, in part because it’s the most diverse city in the world. What’s interesting to us is that Toronto is now being challenged by its own success, in terms of affordability, mobility, growth, and more.

Is that a nice way of saying you’re interested in Toronto because it’s flawed?
Haha—I’d say we’re attracted to Toronto’s openness to addressing problems.

If you achieve your cost-of-living target, won’t everyone want to live there, thereby worsening affordability?
We, alongside Waterfront Toronto, would expect to set prices so that there would be housing available for tens of thousands of people across different income ranges.

This smart community will run on a continuous stream of data from its residents, learning and adapting to problems and changing conditions. Privacy watchdogs are saying that Torontonians will be sacrificing privacy for the prestige of being selected by Google. Do they have a point?
Our intent is not to use data for commercial purposes. It’s not to sell ads. It’s to use data to improve quality of life.

Once you’ve got the data, though, isn’t it just one hacker away from being made public?
In theory, but one of the benefits of being related to Google is that in terms of security, there may be no better company in the world.

Alphabet is a $111-billion organization. Despite your altruistic motivations, Sidewalk is ultimately in Toronto to make a buck. What’s the long-term business model?
Inevitably it will be through technology licensing, our role as co–master developer, with Waterfront Toronto and other partners, and potentially through infrastructure and infrastructure financing at the site. But at this point, we’re not obsessed with the business model; we’re obsessed with developing a plan.

If your project does prove profitable, shouldn’t Toronto be entitled to a portion of the proceeds?
I absolutely believe it should.

Toronto, for all of its greatness, has no shortage of NIMBYists, plus a glacial municipal approvals process. Are you sure you know what you’re getting into?
I don’t think we’re naïve. We’re aware of the complexities of doing things in any urban environment. There are obviously aspects of Toronto that are different from New York, which has a strong-mayor form of government. On the other hand, what we see here is a real openness to trying new approaches. People here may laugh at this, but we see a much greater alignment among the three levels of government here, and to do what we want to do will require that alignment.

I admire your attitude. According to your book, Greater Than Ever: New York’s Big Comeback, you hated big cities as a kid, especially New York. Why?
I grew up in a suburb of Detroit, and as a sort of naïve kid thought that that was the way all people lived. When I was 10 years old, my family took a day trip from Connecticut, where we were visiting friends, into New York. We were driving down the highway, and just past the sign that says, “Entering New York,” off to the left were 37 towers—the Co-Op City development—all looking identical, with a big dump in the front. That was my first view of the city, and I screamed out from the back seat, “I will never live in New York!”

Obviously your stance softened over time.
I visited three or four times as a young man, and every time I felt insignificant. I thought the city was dirty and overwhelming, and that remained the case until my wife, Alisa, took a job in New York and I was forced to move there. Like any place, you appreciate it more over time. For me, first it was the city’s majesty, and later its diversity. And the fact that, like Toronto, it basically worked. I saw New York as a microcosm of what we all hope the world will be. We cram lots of people from all around the world into a very small space, and you know what, they basically get along. That, to me, was incredibly powerful. And it’s part of what draws me to Toronto. Nobody says Toronto is perfect, but compared to almost any other place on earth, it really works, and it represents the best aspects of what the world can be.

You became the deputy mayor of New York just three months after 9/11 and were put in charge of essentially rebuilding the city. What were those early days like?
Intimidating. Before taking the job, I walked over to Ground Zero and got permission to go into the headquarters of American Express, which had been partially damaged. I had worked in that building for two years when I was with Lehman Brothers in the ’80s. I went out onto a ledge overlooking Ground Zero, about eight floors below where my office had been. The cleanup had just begun, but the fires had literally just stopped burning. There was a smell that was indescribable, unlike anything I’d ever smelled before. So, like I say, intimidating. But 9/11 was also a catalyst for doing things that people had talked about doing for years but were unable to make happen. Almost immediately, we began an ambitious five-borough strategy and began to rethink the city for the 21st century.

New York certainly rebounded, but today the separation between rich and poor in Manhattan is as stark as ever. In that sense, did you fall short of your goals?
I think it’s important to recognize that when we started, the fear was not of affordability; it was that people were going to leave the city. Despite that fear, we created America’s largest-ever subsidized housing program by creating or preserving 165,000 units of affordable housing over an 11-year period. Yes, the city did become on average less affordable over the 12 years of the Bloomberg administration. But I wouldn’t say we failed. I think that what happened was that demand actually accelerated faster than we could build housing. Did we get everything right? Clearly not.

Did your time as deputy mayor feature any interactions with a certain famous property developer and media personality?
It did. In one instance, we were selling off a property at the southwest corner of Central Park. It was an old museum that had basically been given back to the city. There were two bidders, one a small museum that wanted to move to a more prominent location, and the other our now-45th president, who wanted to turn it into a luxury boutique hotel, presumably gold-plated. He offered all cash and was prepared to pay up front. This was in 2002, when the city didn’t have any money. We chose the museum. You can imagine the phone call from The Donald. It went from yelling and screaming to threatening to pleading and then hanging up. But that’s not the end of the story. Eighteen months later, The Apprentice debuted on NBC, and I got a call the next morning from Donald Trump, and he wants to tell me one thing: how great the ratings were for The Apprentice. I’m thinking, Why is he telling me this? And you know what? He did the same thing for the next three weeks.

What do you even say to that?
There’s nothing you can say! “That’s nice”? “That’s great”? Later, when I stepped down, I sent out an email to maybe a thousand people to let them know I was going to run Bloomberg, and I included Donald on the email. I got all these wonderful notes back, and then an email from him. In a big felt-tip pen, he wrote “Great job!” Then, in the body of my email, he circled a small typo, which I think was two periods instead of one, and he put an exclamation point beside it. This from the guy who spells “tap” with two Ps in his tweets. In those two episodes, you can pretty much learn everything that we now know about our president.

You live in New York. How smart is your home?
Alisa and I live in an apartment, and I’d say it’s smarter than its occupants. These days, I’m not there as much. I commute weekly to Toronto.

Jane Jacobs moved here from New York. Any plans to follow her lead?
No, because I am married and intend to remain that way! We’ve lived in New York for 30 years. But I am bringing Alisa here in April. She’s never been. I plan to take her biking through Kensington Market and Regent Park.

Former Alphabet chair Eric Schmidt recently characterized Sidewalk Labs as what would happen if someone put Alphabet in charge of a city. He was joking, but he raised an interesting point: who will be in charge of this futuristic community?
It’s hard to say. This will be a new kind of entity, one that combines the public sector and Sidewalk Labs in a way that reflects lots of public input, in both its conception and organization.

Then who do I complain to when my pneumatic garbage chute malfunctions?
Haha—the system should already know, remember? No phone calls needed.