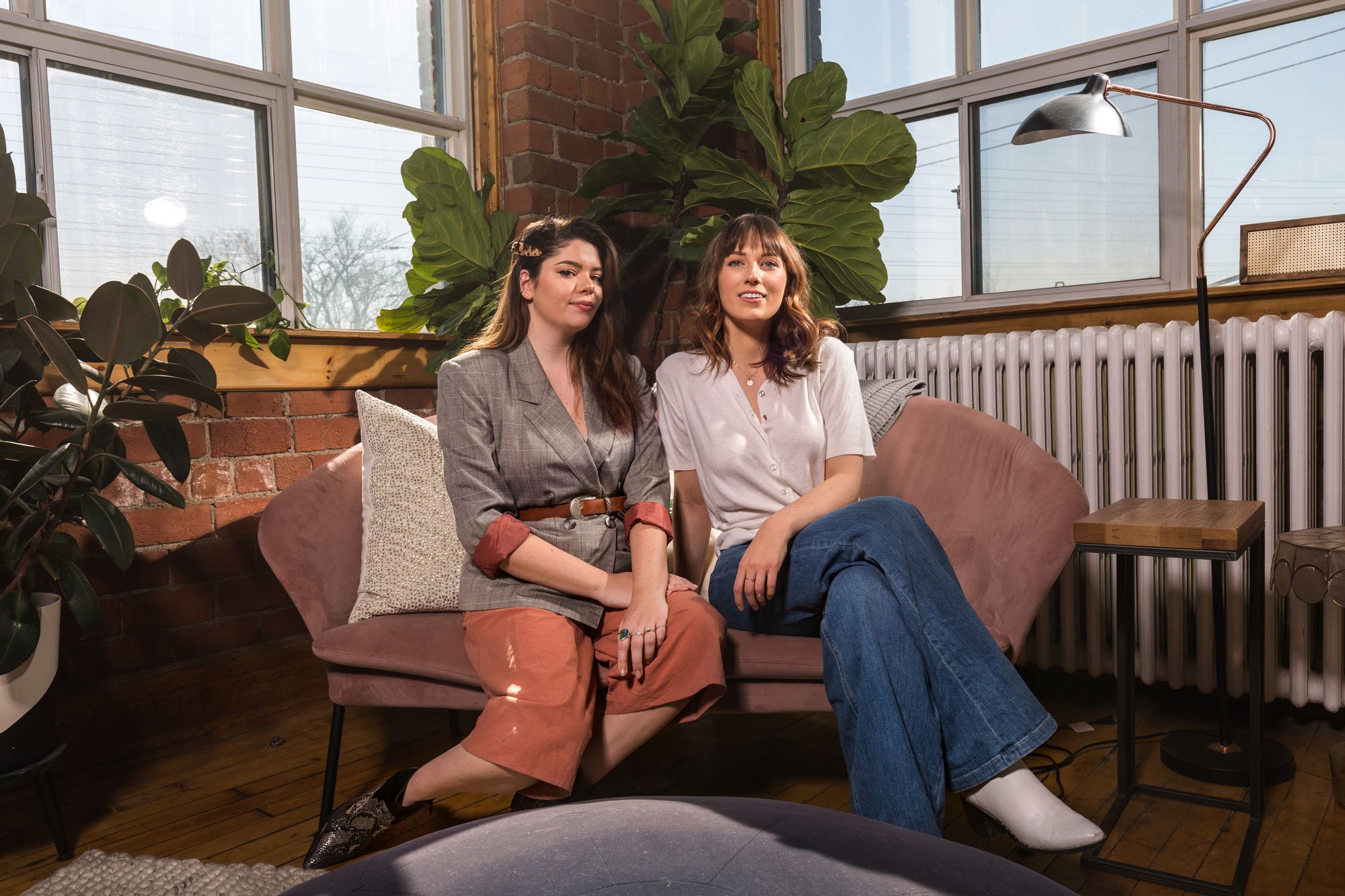 Kelsey MacDermaid: Becky and I met at Humber College in 2010. We lived in residence and quickly became friends. When October rolled around, we planned a best friend Halloween costume as neon highlighter pens and uploaded a tutorial to YouTube. We weren’t expecting our videos to take off, but we were in the film program and had a love for making short films. At first, we received a few hundred views.

Becky Wright: Things didn’t really pick up until the following Halloween, when we did a Black Swan costume. We were one of the first accounts to put out an instructional video, and we got 80,000 views within a couple of days. It was exciting and kind of unexpected.

Kelsey: At the time, we were living in our first apartment together. So we started posting apartment DIY videos once a week.

Becky: Mason jars were trending at the time. We did a bunch of different videos on how to upcycle and reuse mason jars. We also made a video on upcycling thrifted T-shirts that performed extremely well. By August 2013, we had 100,000 subscribers.

Kelsey: We graduated in 2014 and worked in the film industry for about a year. I was a production coordinator and Becky worked in the art department on various TV shows and movies. Then in the summer of 2015, Scott McGillivray from HGTV got wind of our YouTube channel and took us out for lunch. I thought, Wow, if Scott McGillivray thinks we’re doing pretty well, we should take this channel to the next step.

Becky: It was a now-or-never moment. We had 300,000 subscribers, and in order to keep up that growth, we had to upload as often as possible. At that point, we were earning enough through YouTube for both of us to make a living. We quit our jobs and in August 2015, we incorporated as a business.

Kelsey: We got an office, a little 250-square-foot room near Yorkdale, and started treating YouTube like a nine-to-five. We set a schedule for ourselves to upload twice a week.

Becky: Later that year we started a series called Thrift Flip: we would go to the thrift store, find a clothing or decor item and upcycle it. We updated ’80s prom dresses, decorated an entire Christmas tree with thrifted finds and converted old jeans into backpacks. Our videos were getting 30,000 to 50,000 views on average.

Kelsey: We also started collaborating with other YouTube creators like How to Cake it and With Wendy. In 2015, we signed on with a manager, Reuven Ashtar. He helped us manage brand deals and get new opportunities; we’ve since worked with brands like TD and Google.

Becky: By 2016, I had saved up enough to buy a house just north of Toronto with my partner. Then in early 2017, we outgrew our office near Yorkdale.

Kelsey: At the same time, I was also looking for a new place to live. We came across a loft space in the west end. We decided the main floor would be our studio and the mezzanine would be my bedroom. After moving in, we started a new series called Loft Vibes about decorating the space. 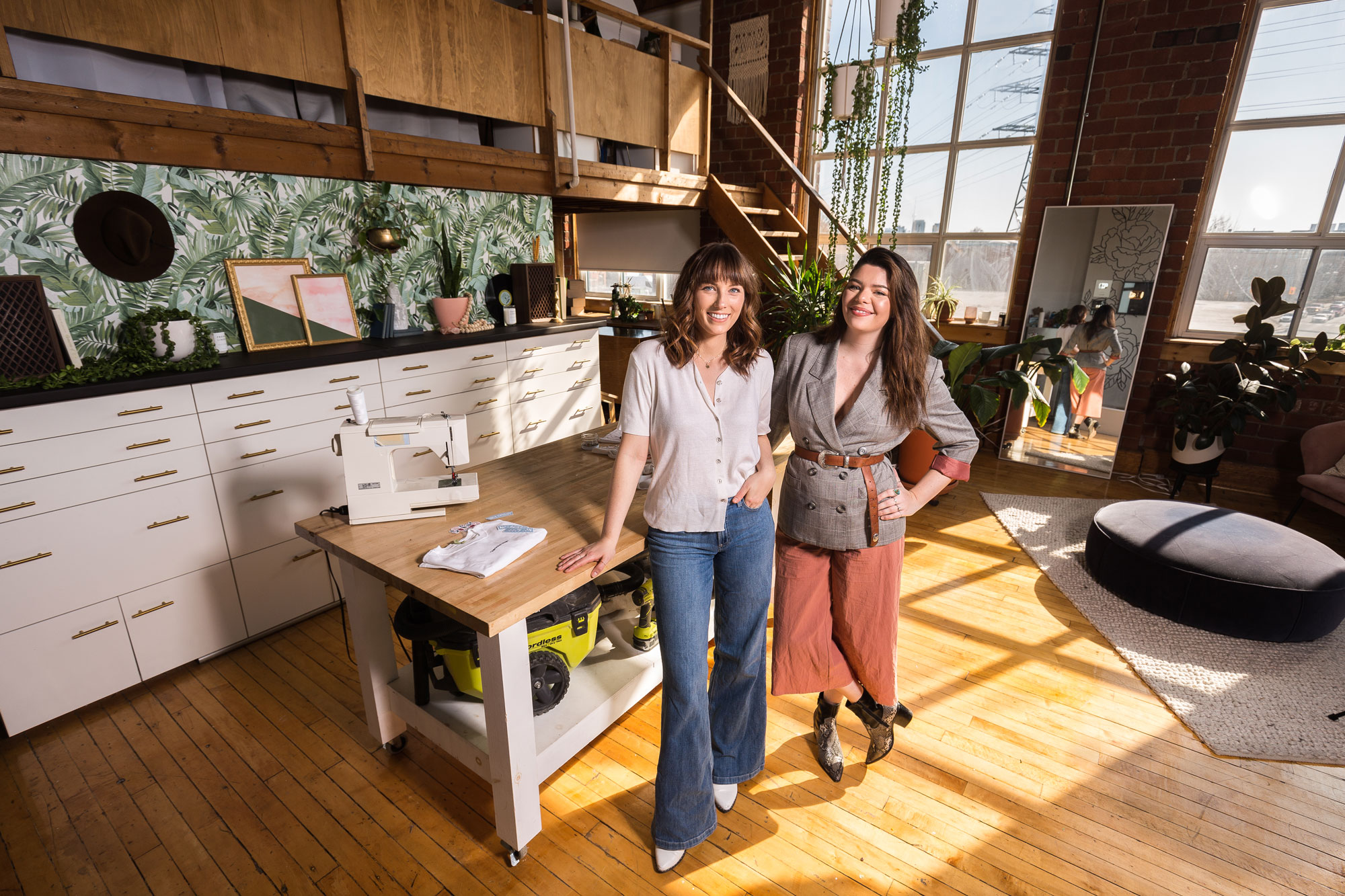 Becky: We experimented with confessionals, multiple camera angles and having someone else film us. It was a produced TV show, like something on HGTV, which was really cool. By July 2017, we hit one million subscribers.

Kelsey: We took on our first full-time hire around this time, who helped us with social media. We now have four full-time staff that we’ve continued to employ during the pandemic, and a roster of freelancers that work with us on a regular basis. We work with lots of Humber graduates, whether they’re friends that we went to school with or referrals from our teachers.

Becky: We try to film two videos a week. On Mondays, we talk about what we want to film for the next couple of weeks and what supplies we might need. The rest of the week is booked up with filming and admin work. Room makeovers take about 24 hours of filming.

Kelsey: In 2019, I bought my own place in the west end of Toronto. Now, I’m converting it into a duplex and we’re covering the renovations in a series. In February of this year, we launched a new series called Upgrade My Stay where we check into vacation properties we find on Airbnb or elsewhere, upgrade them and reveal it to the hosts on checkout. We got funding for this series from the Bell Fund and Ontario Creates, so we had a larger budget and 10 crew members working with us.

Becky: It’s the most produced thing we’ve ever done. The hope is to pursue a second season. Being on Netflix would be a dream. The show is on hiatus right now because of the pandemic, so we’ve pushed back our filming dates. We still haven’t confirmed an official start date for the second half of Upgrade My Stay, which is themed around summer experiences like cottages and boats, so we hope to get the go-ahead soon.

Kelsey: We’ve been offered some pretty cool experiences because of the unique business that we run. In 2018, we went to Tanzania with ONE Campaign to see the ways Canada and other countries are supporting small businesses that are woman-owned there. And in the summer of 2019, we appeared on Strahan, Sara and Keke. We did summer backyard game DIYs in Times Square. It’s something you don’t think you need to do or want to do until you’re there and you’re like, Holy crap. This is so crazy cool.

Becky: We were scheduled to appear at the One of a Kind Show in Toronto and VidCon in California but both events were canceled due to Covid-19. Thankfully, we haven’t experienced any major income loss. In mid-April we were even able to upgrade our part-time editor to a permanent full-time position. We’re all working remotely.

Kelsey: It’s not been easy adapting to the pandemic since we live separately. But sometimes Becky and I record videos together virtually.

Becky: Tackling the video on my own has been one of the biggest challenges. I’ve always had at least one other person to help focus a shot, hold a camera and take photos of me. We are noticing a lot more traffic and engagement.

Kelsey: Our most recent video from our Loft Vibes series received a quarter of a million views in the first 24 hours. Before the pandemic, it may have taken two weeks to receive that type of viewership. We were moving out of our loft in that video.

Becky: We decided to move offices before the lockdown, so we took turns going into the office and packing it up. Our new office is an industrial garage warehouse space that’s double the size. We haven’t been able to properly set up the new space yet. The bones may not be as beautiful as our old office, but the possibilities are endless.We’re excited about having main floor access, two giant garage doors, a custom kitchen, outdoor space and being in a much quieter neighbourhood—great for filming.

Kelsey: During the pandemic, we’ve been filming DIY projects around our homes since we’re trying not to go outside as often. We’re fortunate enough to run a business that runs mostly online, so we’ve been able to keep up operations.

Becky: I gave my bathroom a makeover using only supplies I could find around my house. We saw a huge spike in views for that video–259,000 views in the first day compared to our average of 100,000. I’ve definitely had to get back in touch with my OG YouTuber roots from 10 years ago. Before there were fancy camera setups and teams of people, YouTube relied on personality. That’s what we have now. It leads to better videos, and the response bears that out.