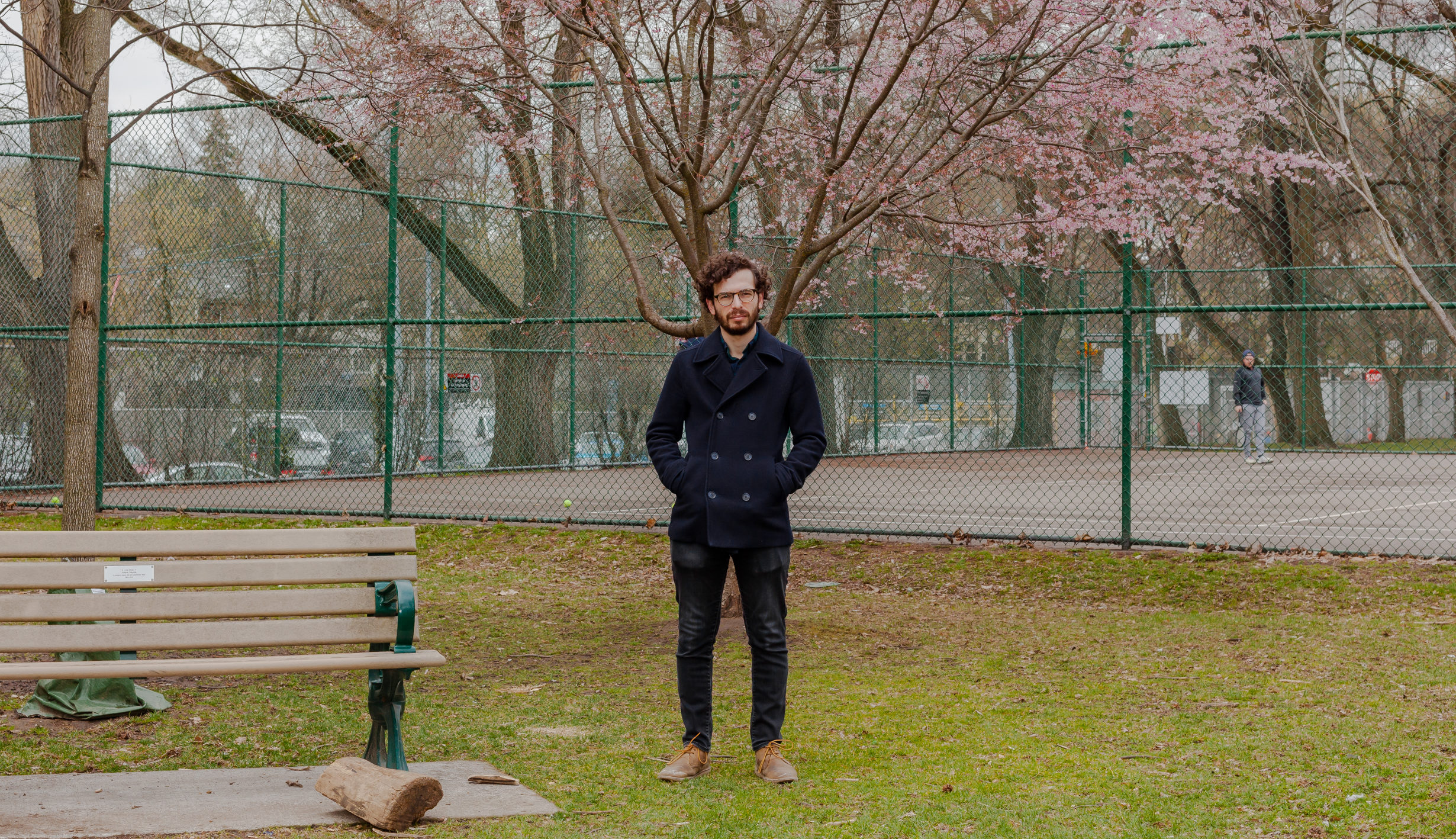 For millions of Torontonians, the search for a vaccine is the Holy Grail quest of the Covid era. And it’s no small task given the constantly changing rules, last-minute cancellations and hush-hush pop-up clinics that you only hear about when they’re over. Enter Vaccine Hunters Canada, a Twitter account and web platform that’s helping to make sense of the mayhem. Joshua Kalpin is a software developer by day and Vaccine Hunter after hours. By his estimate, the community-run effort has connected thousands of (eligible!) Canadian arms with jabs. Here, Kalpin tells Toronto Life about how it works, why vaccine intel is a lot like celebrity gossip and what he thinks of people trying to jump the line.

First off: could Ontario’s vaccine rollout possibly be a bigger screw-up?
I understand that people are frustrated, but our motto is to get as many people vaccinated as possible and to leave the politics to other people. We don’t think it’s our place to criticize or blame anyone. And we don’t believe that would help anyone to get vaccinated any faster. We just want to help Canadians get through this nightmare.

Okay, but wouldn’t things be less nightmarish if the people in charge seemed be a little more in control?
Just to clarify—the nightmare is the pandemic, not the vaccine rollout. We are at war with the virus. There has never been a rollout of this scale in modern times, and I think Vaccine Hunters Canada would exist regardless of how things were going. Our group is people helping each other. Unlike so much of what we’re dealing with, helping others is something we can control.

Fair enough. Where did the idea for Vaccine Hunters Canada come from?
The creator is a guy named Andrew, a web developer who lives in Toronto. Back in March he was keeping an eye on eligibility for his parents and he noticed a website called VaccineHunters.org, which helps people navigate the vaccine program in the States. It became clear that we needed something similar for Canada, so he set up a simple web page and a Twitter account.

When did you get involved?
I came to the site because I was trying to help some family members get vaccinated. I kept learning more and posting tip after tip, update after update. I was tagging Andrew in so many posts that eventually he was just like, “Why don’t you help me run this thing?” That was right before things blew up. It’s a lot to keep up with, and Andrew and I both work full time. I brought on a couple of other friends, so there are now four moderators. We’ve also started working with contributors who specialize in specific provinces.

How does Vaccine Hunters Canada work exactly?
Most people follow us on Twitter—that’s where we post updates based on our own intel and also retweet valuable information. And then we have the Discord board—VaccineHuntersCanada.ca—which is basically a public server where you have different chat rooms. Each room focuses on a different topic. So, in Ontario, you can search by categories like “Am I eligible?” “Booking help,” “Hot spot.” We have channels by location, age, health conditions. And then we have a tool that automatically tags each post. It’s a fairly low-tech operation—there’s very little coding involved.

Where do you get your intel? Do you guys comb the internet for information, spend hours every day on hold with hospitals and pharmacies?
At first Andrew and I were sourcing a lot of the information ourselves, but more recently the community—the people who are the most active on the Discord board—has really stepped up, providing information in the chat rooms. In the last few days our traffic has increased about tenfold.

Do you have any kind of fact-checking process or do you just hope for the best?
Certain tips are easy to check. A lot of the hospitals in Ontario use an online booking tool called Verto, so we can check with that. If we get a tip that, say, North York General has a bunch of appointments at Seneca, we will check the hospital’s website to verify. The last thing we want to do is to cause chaos. The other day we got a call from a pharmacy saying that they were getting calls from people who’d been directed to them through our site, even though they didn’t have vaccines. We apologized and sent out a correction as quickly as possible. Lately we’ve been getting tips before information goes public, which can be tricky to verify. Like, hey, this clinic is now accepting 18-plus but it’s not on the website yet. That’s happened quite a few times this week.

Why wouldn’t that kind of valuable information be posted on a website?
Eligibility changes so quickly. We’re often getting our tips from people who report back after getting their vaccine. One clinic in a hot spot, for example, was originally doing people 50 and up, but then they started doing 18-plus. We got that information from an insider who works there, so we were able to share it days before city councillors or MPs knew.

Sounds like you would be pretty good at running a celebrity gossip magazine.
Ugh, I’m good. I like my day job.

How much time does your side hustle take up? Are you monitoring message boards in the middle of the night?
I try to go to bed around midnight. Mostly I work on Vaccine Hunters in the evening. Usually while sitting on the couch watching a hockey game. I’m a massive sports fan.

Any idea how many people have been able to book a vaccine based on your tool?
I don’t have a number, but it’s got to be in the thousands. The beautiful thing is that so many people come to us to find a vaccine for themselves or a loved one, but then they’ll often stay in our community and help others. Maybe it’s a Canadian thing, but it is really amazing to see how much people are willing to do to help each other.

Do you have any favourite stories about the people you’ve been able to help?
One of our big early successes was when Jean Yoon from Kim’s Convenience tweeted that she was able to book her vaccine based on info she got through our Twitter feed. I’m sure it helped to build our profile. Then last week, a woman came onto the Discord board who was trying to book vaccines for some developmentally disabled adults. Many of them couldn’t drive, or English wasn’t their first their language. It was amazing to see how everyone worked together to get all these people booked, and even set up transportation. Another person came in looking for an appointment for her dad. Since then, she’s organized appointments for over 100 people—mostly in high-risk postal codes, a lot of caregivers and PSWs, people with medical conditions. We jokingly call her Batman. You wave the vaccine symbol and she’ll find an appointment out of thin air.

Do you encounter people who are looking to jump the line?
We’ll occasionally see that kind of behaviour on the message boards. It’s something we take very seriously. Our goal is to help every eligible person get vaccinated, and we have absolutely zero interest in helping people get around the rules. That said, there are a lot of cases where people genuinely aren’t clear on their eligibility, especially with criteria like mental illness, BMI and developmental disabilities. There are a lot of grey areas. What we want to do is empower people who do qualify to get their shot without feeling ashamed or like they don’t deserve it.

Any theories as to why some of these pop-ups are being run like top-secret sneaker drops?
In a lot of cases, pop-ups are happening in places like high-density apartment buildings with a lot of seniors. I’m not in on the planning process, but I think you can understand why having 500 people swarm a building full of frightened old people is not a good thing. Some of the larger pop-up clinics, like the one in Thorncliffe Park, did a fantastic job of advertising. And then you have locations at mosques and community centres—places that reach people who aren’t online all the time. That is incredibly important.

I guess it just feels like there are new rules every day, and that nobody is really driving the bus. Do you understand the frustration?
We want to fight frustration with information. We need to get shots in arms but we also need to be surgical. This is something the infectious disease doctor Isaac Bogoch talks about a lot. I admire how he’s able to remain neutral and just convey the facts. I think I’m his biggest fan.

No, I’m his biggest fan!
Ha, I know. He’s just such a great communicator. I’m going to send him a bottle of scotch when this is all over.

Does he follow your account?
I don’t think he does. That would be an honour. I have seen that there are a lot of local sports writers who follow us, which is exciting for me. Yesterday we got a tweet from my high school computer science teacher, who just said “Go Josh!” That was great.

Are you hearing from old high school buddies and third cousins who want info on how to get their shot?
I am definitely the go-to person at work. I couldn’t keep up with everyone so I made a bot that dumps the entire Vaccine Hunters Twitter feed into a channel. I have family members who come to me because they’re trying to get a vaccine for someone they work with. At this point, the best thing is to ask in our Discord. Compared to some of our community members, I’m rusty.

Any temptation to monetize your operation? I feel like you could rebrand as a vaccine concierge service and start charging big bucks.
Not at all. We have people offering to send us money and we tell them to donate to a food bank or a charity supporting front-line workers. That’s who needs support right now

Let’s fast forward to later this year when, knock on wood, the vaccine rollout is over. What happens to the Vaccine Hunters community?
When this is all over, it would be fun to meet the rest of the team in person. I’ve spent so many hours in the last month communicating with Andrew and I still don’t even know what he looks like.