On July 4, the patio at Queen West’s Cadillac Lounge was a little slice of the U.S.A. About 80 American expats who now call Toronto home gathered for Independence Day, decked out in stars and stripes. At the moment, Hillary Clinton leads Donald Trump (a.k.a. America’s version of Rob Ford) by about five points. We crashed the expat party to conduct our own unscientific presidential poll—which was, shall we say, a little one-sided—and ask erstwhile Americans to share their hopes and fears about the weird, wacky things going on in the motherland. 70, historian and retired educator, from Washington state
Expat since 2011

“A lot of people think I’m the vanguard of the massive American emigration, storming the Canadian border to escape Trump’s America. He is an international embarrassment, America’s version of Rob Ford: pompous, bombastic, over-the-top with crazy ideas, with a very firm core of supporters.”

Who are you voting for? “I voted for Clinton when she ran against Obama, and I’ll vote for her again.” 29, Psychologist, From Kentucky
Expat since 2015

“It’s been an interesting year to live in Canada as an American. My partner and I are Bernie supporters, and we work in universities, which are sheltered from the culture that supports Trump. I had a student tell me, ‘Oh, I didn’t think Americans were like you.’ I wasn’t sure if it was a compliment—we both laughed. When a book club I attended found out I was American, they all leaned in and asked, ‘So what’s happening with Trump?’ The Service Canada employee asked me the same thing when I applied for OHIP. As If I would know.”

Who are you voting for? “We are going to vote for Clinton—unless she goes to prison, in which case we’ll vote for Sanders and be happy.” 67, graphic designer and writer, from Alaska
Expat since mid-2000s

“I can’t imagine anybody liking Trump. He’s not a politician. He’s a blowhard who likes to hear himself speak.”

Who are you voting for? “I was a Clinton supporter in 2008 and I continue to be one today. I can’t think of anyone, male or female, who is more prepared, and it is high time that America has a woman leading it.” “Trump is a most unfortunate presidential candidate. He has no interest in uniting us or understanding the values that America stands for. That’s as much attention as he’ll get from me.”

Who are you voting for? “Clinton. If she becomes president, it’ll be very good for the United States. I would not enjoy going back, or even visiting again, if Trump was president.” “This election is really a choice between two really bad options, one of which is much worse than another. It’s become theatre. Even in Canada, you can’t go to a social function without someone bringing up Trump: ‘Did you hear what Trump said yesterday?’ It’s like asking: ‘Did you watch Game of Thrones last night?’ Trump makes for good icebreaker talk. He does have really good hair.”

Who are you voting for? “I’ll vote for Sanders if I can. He’s the only candidate who does not reverse his position. He genuinely believes everything he says.” 73, cybernetics researcher, From Maryland
Expat since 1988

“All my friends are Democrats. I have not met any Trump supporters. I don’t know anyone in the U.S. who supports him, either.”

Who are you voting for? “I’d vote for Clinton because she’s likely to be the nominee. But in Canada, we live under a lot of the policies that Sanders is advocating for: cheaper university tuition, higher minimum wage, better healthcare and stricter banking legislation.” “It’s like Rob Ford has moved south. Trump’s the same kind of clown. He says a lot of rude things—and people like it. If he didn’t exist, late night comedians would have invented him.”

Who are you voting for? “I’d vote for Clinton.” “Trump once proclaimed that he loved Canada. I’m afraid it’s an unrequited love. I’m terrified by him. He doesn’t even know how to get a good hair stylist.”

Who are you voting for? “I’m proudly pledged to vote for Sanders at the 2016 Democratic National Convention, but I will vote for whomever is the Democratic nominee in the general election.” 50s, Salesperson and Freelance Writer, From Connecticut
Expat since 2005

“Trump is a joke. When I lived in Connecticut, he was quite the character—a millionaire, constantly switching wives.”

Who are you voting for? “I would vote for Clinton. She was a super-qualified, awesome First Lady. She is confident and competent, got the conversation started about healthcare, and she’s a woman demanding power—and that pisses everyone off.” 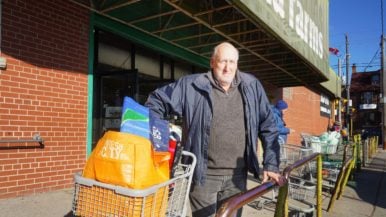