Last Thursday, the Ontario Ministry of Education announced it would be closing all publicly funded schools until April 5, and Torontonians started panic shopping. There were reports of hour-long waits to even get into some grocery stores. By Friday evening, many had been cleaned out of canned goods, pasta, rice and toilet paper. We spoke with shoppers at the Maple Leaf Gardens Loblaws on Saturday to see what they were stocking up on to ride out the coronavirus pandemic. 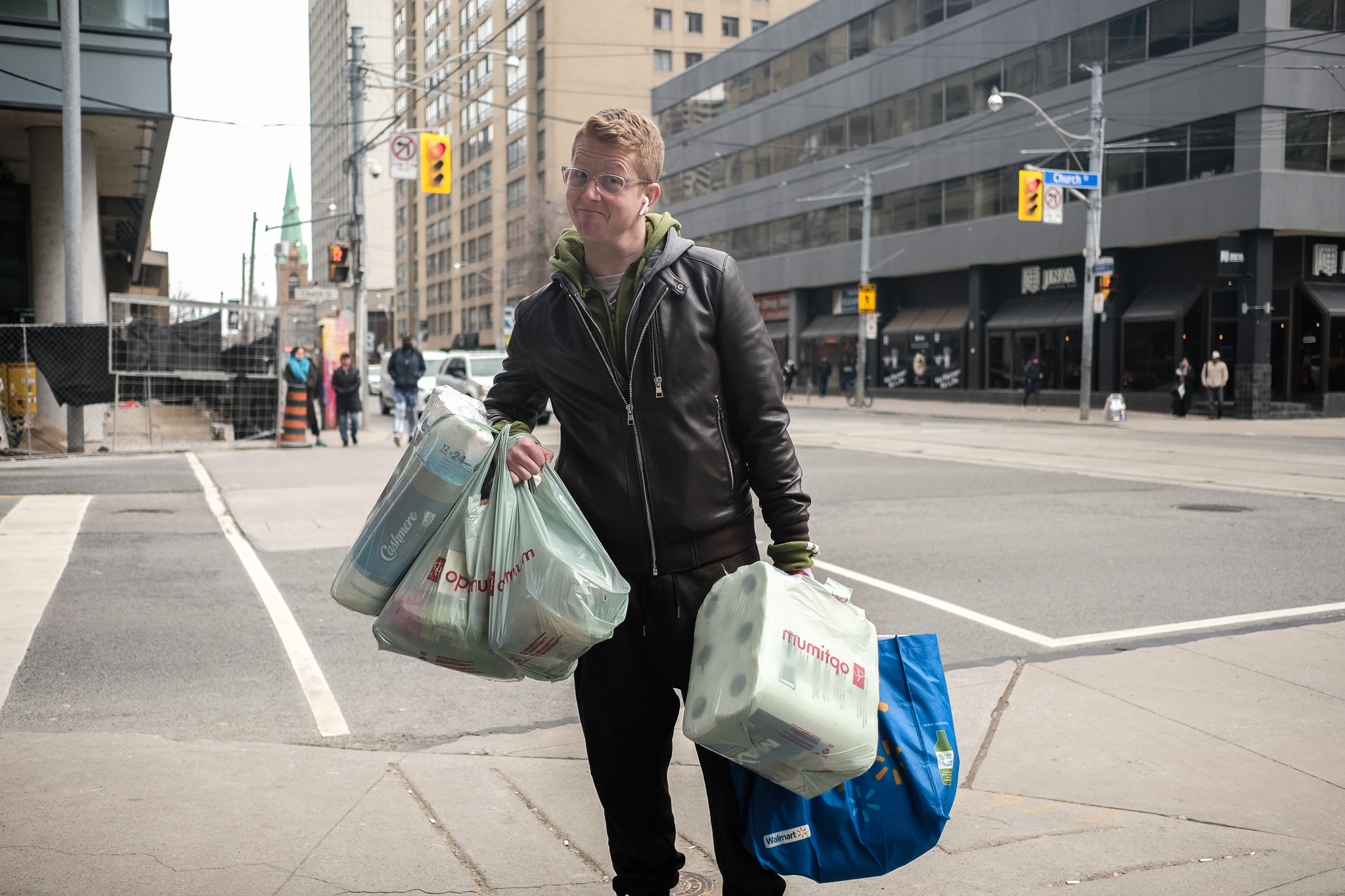 What are you stocking up on?
There were boxes of toilet paper and people were grabbing them. I grabbed two. I don’t even know why, because I live alone but I got excited. I was on the phone with a friend and he told me to put one back. I told him I did—but I kept them both. A man asked me where I got it from, but because I knew they were all gone I gave him my extra pack. If we can’t help each other, what’s the point?

How much did you spend?
I spent about $200 today—more than what I’d normally spend. I typically eat out, and I know that I’ll be working from home. I bought things I don’t usually buy, like canned goods and these paper towels, which I don’t even need—I don’t know why I got them. This was the third store I checked for toilet paper, and I was surprised they had some. Everywhere else I went was sold out. 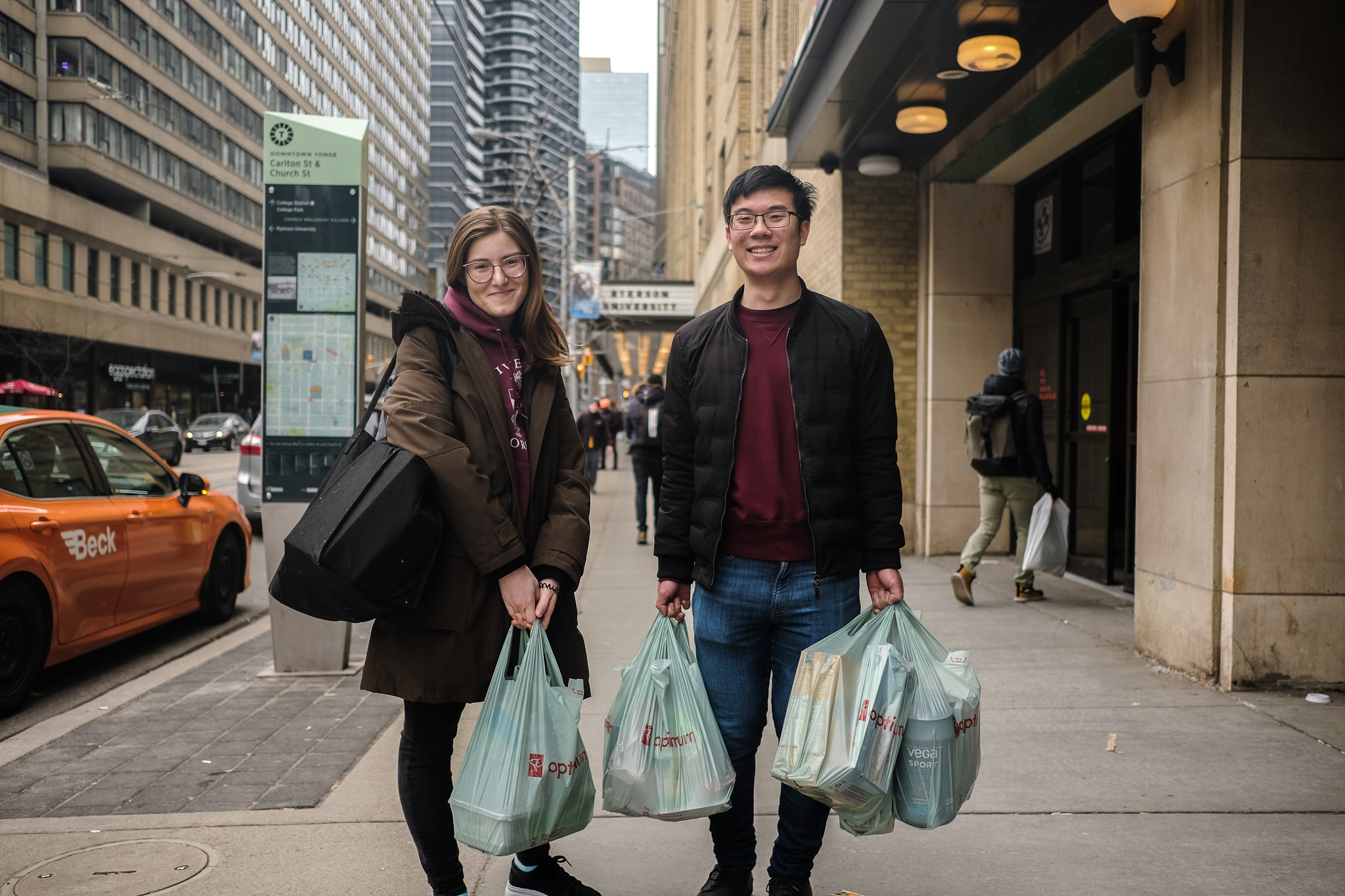 What did you stock up on?
Angus: A lot of basic groceries today—a bit of meat, cereal, some snacks for the work week. Nothing out of the ordinary, content or quantity wise. This is a really standard grocery run for both of us. We walked in though and thought that it looked less-stocked than usual. You won’t find any canned soup.

Christine: There were no vegetables. The rice is gone, canned foods are gone, eggs are gone. 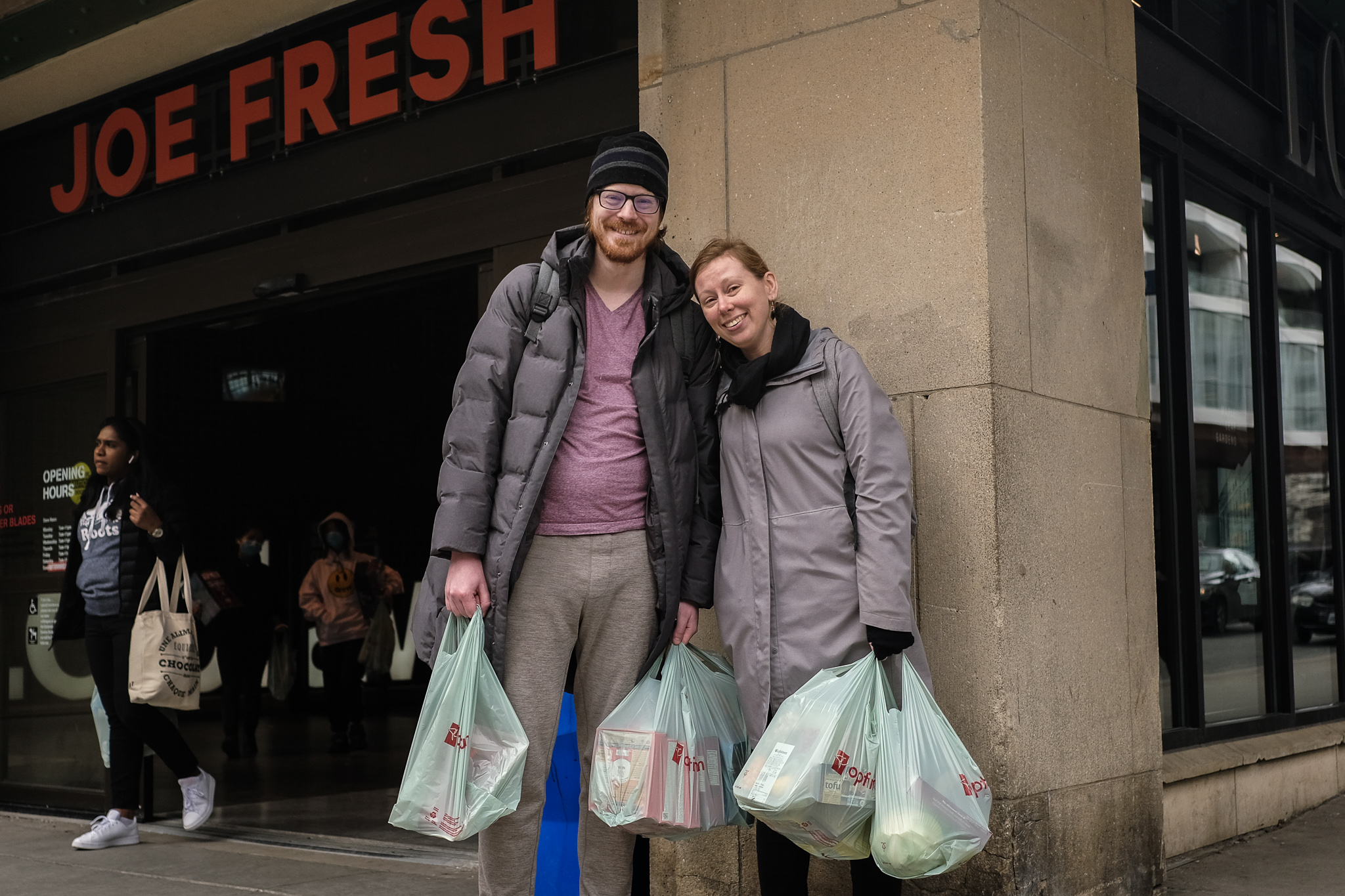 What did you stock up on?
Hugh: I wouldn’t call it “stocking up”—I don’t really condone the idea of panicking just yet. I do understand and appreciate the idea of taking it seriously, keeping your hands clean and washing, but I feel like trying to stock up is just causing other people to panic. I noticed that canned foods were out, but most of the fresh produce was still there. It’s hard to not have confidence when that’s still around.

Amy: It’s tough for sure, but I think we’ll be fine. We both bought our usual things, nobody panicked. I got some frozen food I’ve never tried before.

Did you buy anything non-essential?

Hugh: I got some Oreos as a treat. The funny thing is, instead of looking at endless selection and only getting what you’re familiar with, suddenly you’re like “Oh, I’ve never tried that, maybe I want to” because it’s the only thing on the shelf. 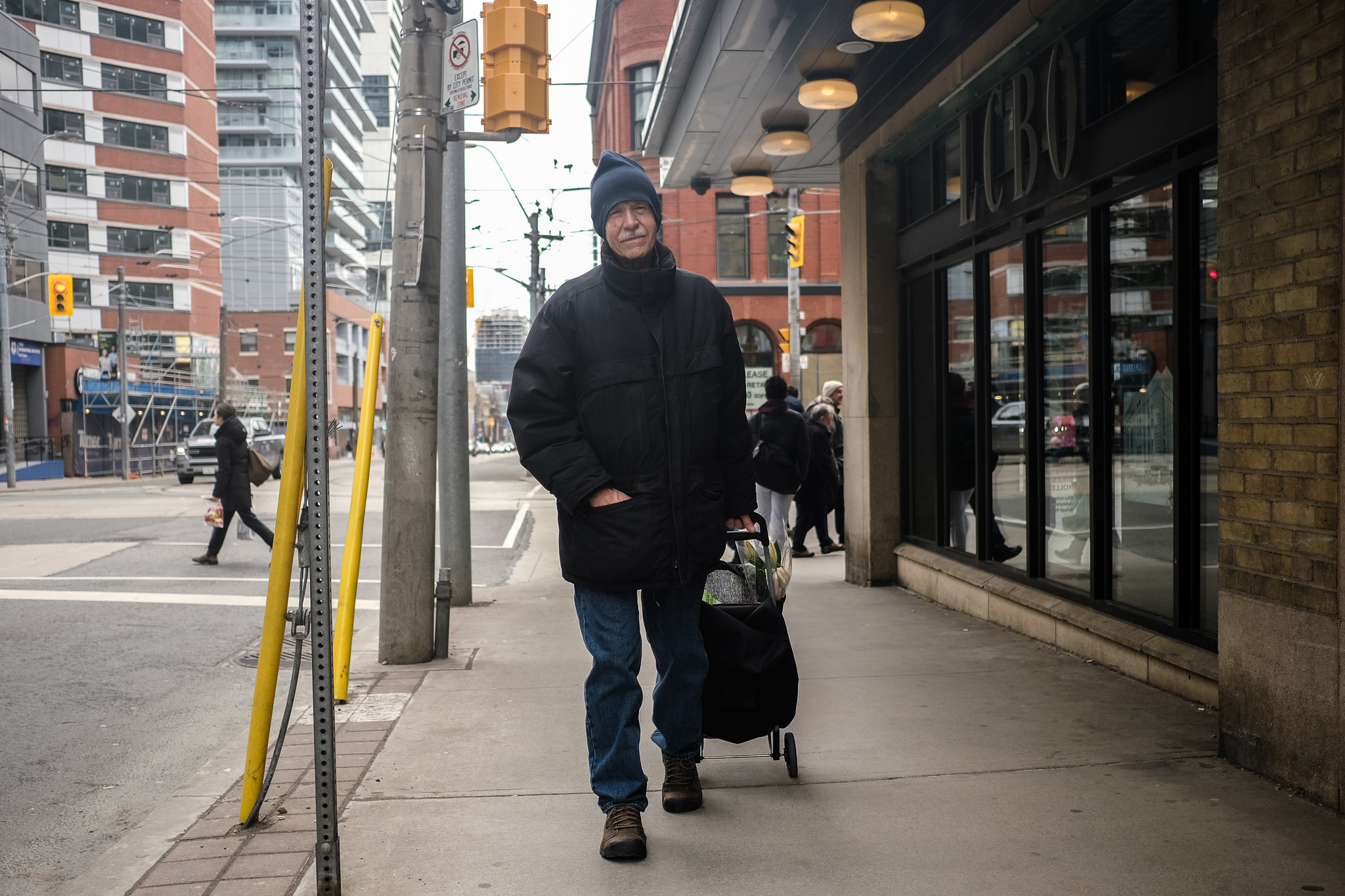 What did you stock up on?
I didn’t really stock up on anything out of the ordinary. I’m not sure how we’re doing as far as the virus goes—there’s lots of pooh-poohing about the American government, but nobody’s talking about what’s going on in Toronto. I don’t know how I would go about get tested for coronavirus. I could use some more guidance I guess.

Did you get anything non-essential?

I treated myself to lunch—they make a good pasta. 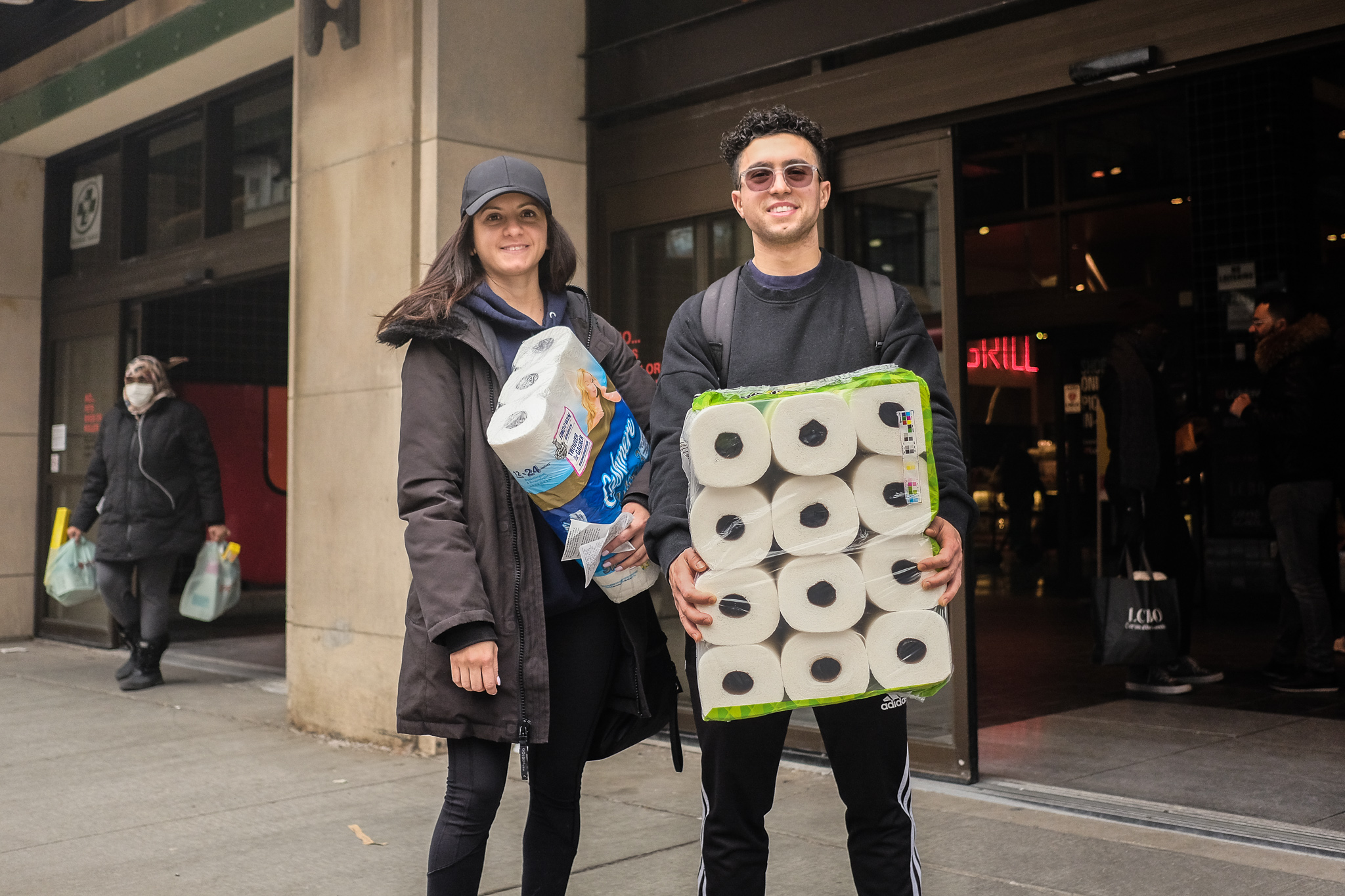 What did you stock up on?
Salvatore: We got some toilet paper—we needed some. I work at the site across the street and I noticed that since the pandemic started it’s been crazy inside. I’m upset there’s not a lot of rice, I like rice. 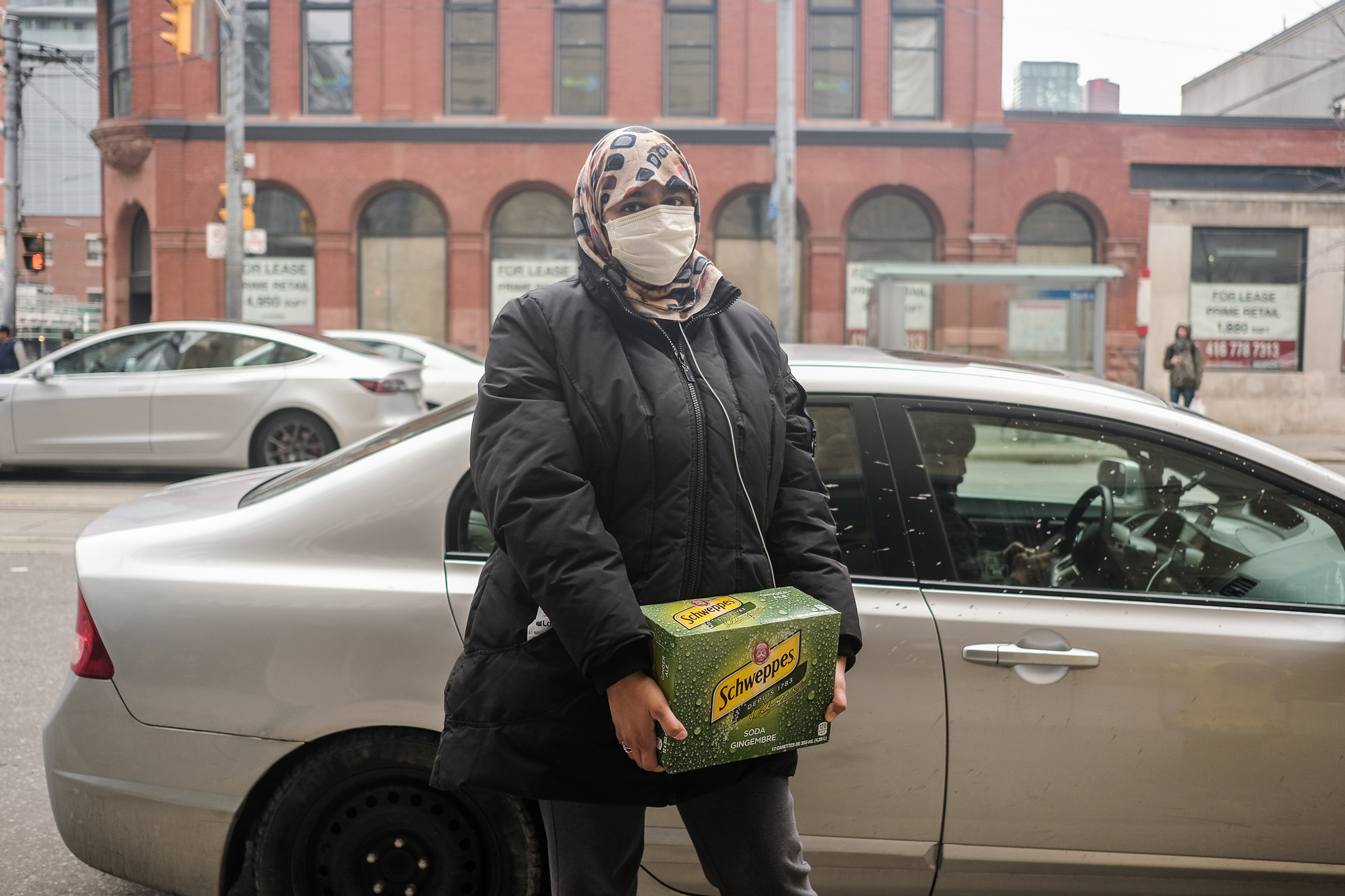 What did you stock up on?
I went to a Walmart and another store in Markham and now here. I’ve spent nearly $500 today on about a month’s supply of stuff. Certain things are out of stock—house cleaning supplies, frozen foods, meats were low, vegetables and fruits were low—but I think they’re restocking. My sister lives in the U.S. and right now they don’t have enough groceries at home—that’s why I thought to fill up our fridges now.

How long did you have to wait?

I’ve been here for about two hours now. I waited an hour in the checkout lane.

Did you buy any non-essentials?

I treated myself to this box of Schweppes ginger ale. 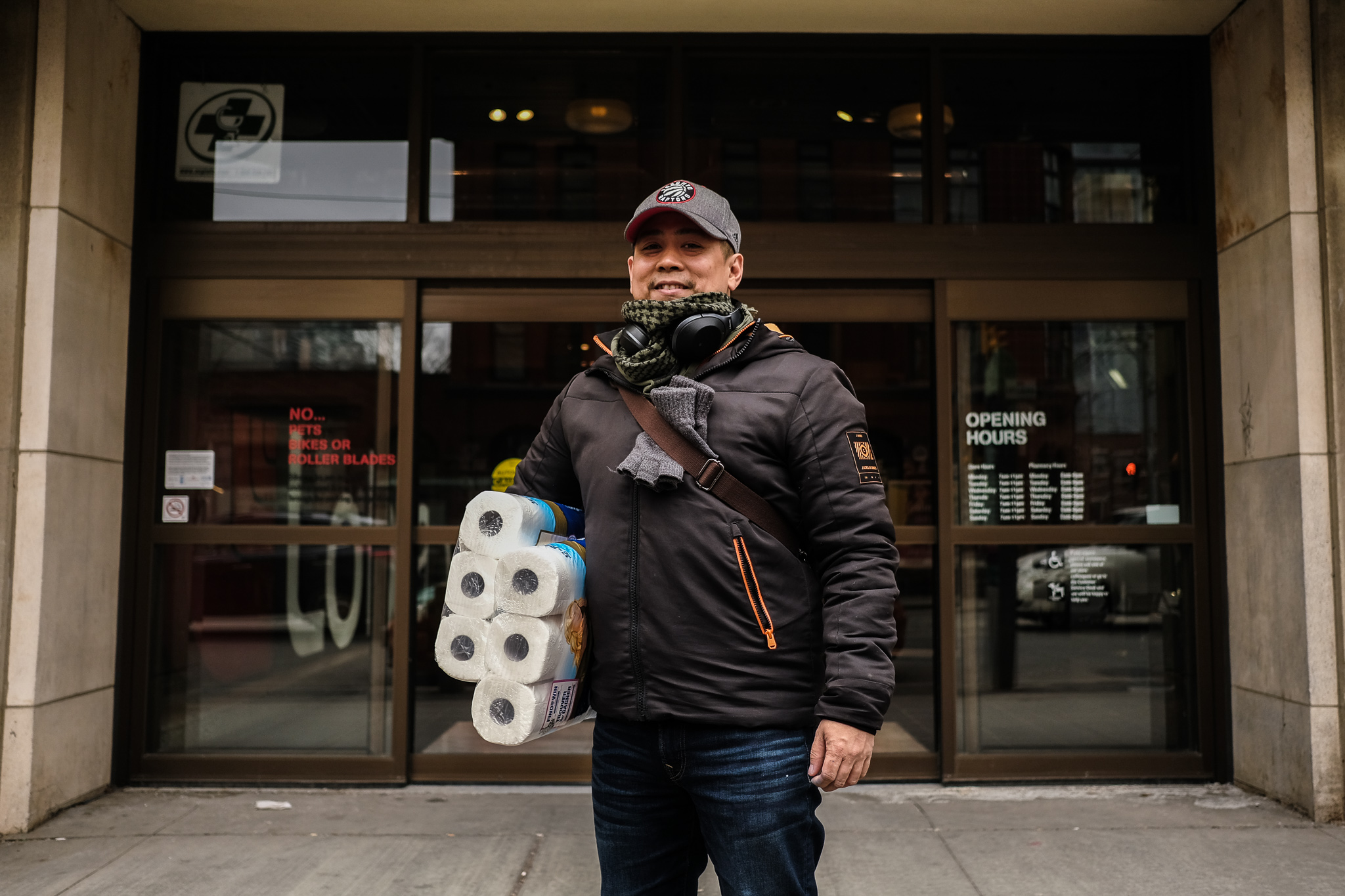 What did you stock up on?
I was already doing errands, so I thought maybe I should get some toilet paper. I checked Canadian Tire first, but they were out. I was walking towards the Eaton Centre when I saw a lady with packages of toilet paper, so I asked her where she got them. She was very friendly and told me to come here. There’s a limit of two, so I got one for myself and one for my parents. 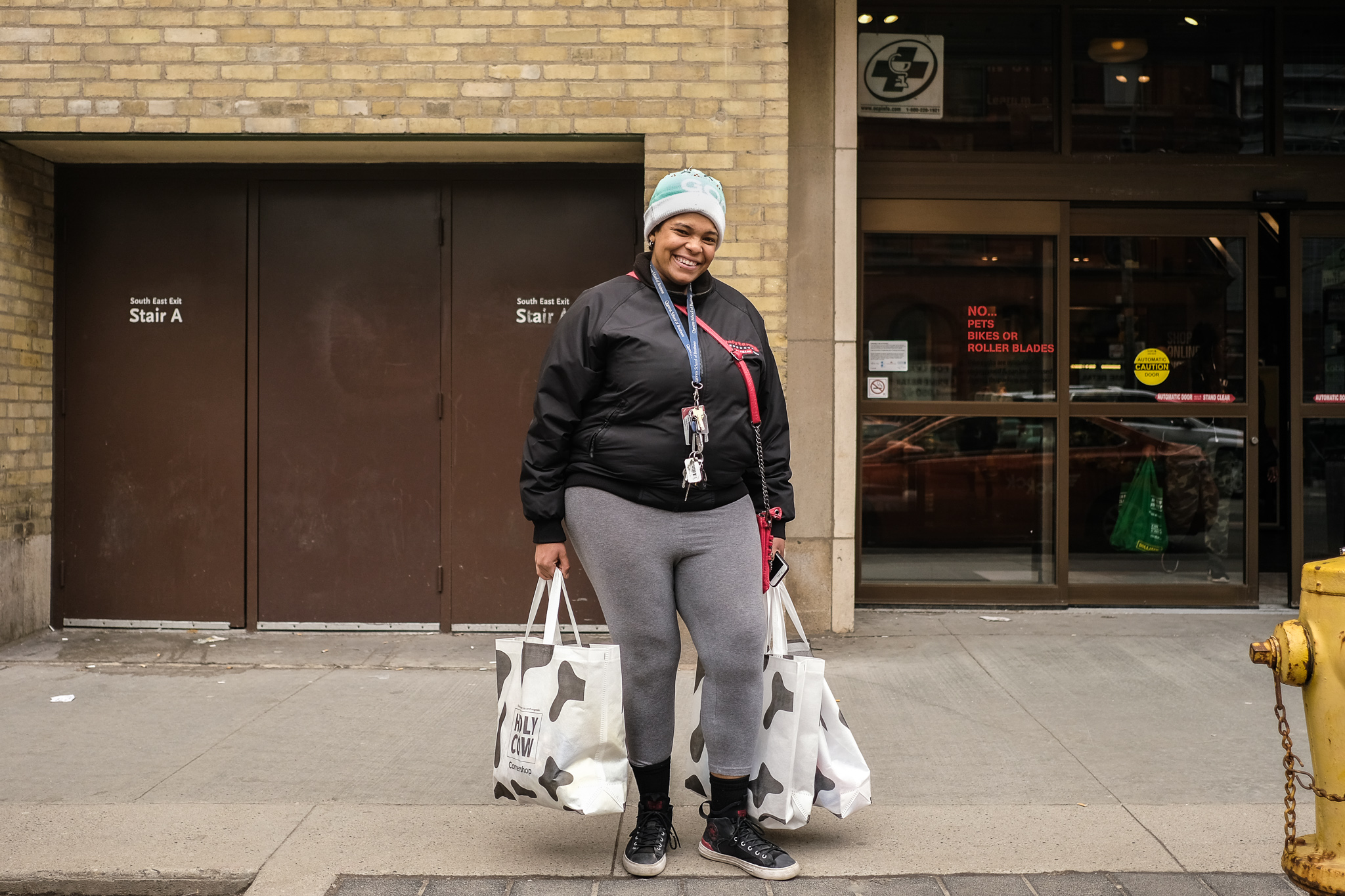 What did you stock up on?
I see a lot of people buying junk food and I don’t understand it, because we have an illness attacking our immune system. The one thing I don’t see people buying are vitamins and holistic medicine, so that’s what I’m getting. Maybe talk to your doctor about what you can take to support your immune system. I’m buying stuff that I think will make my body healthier. 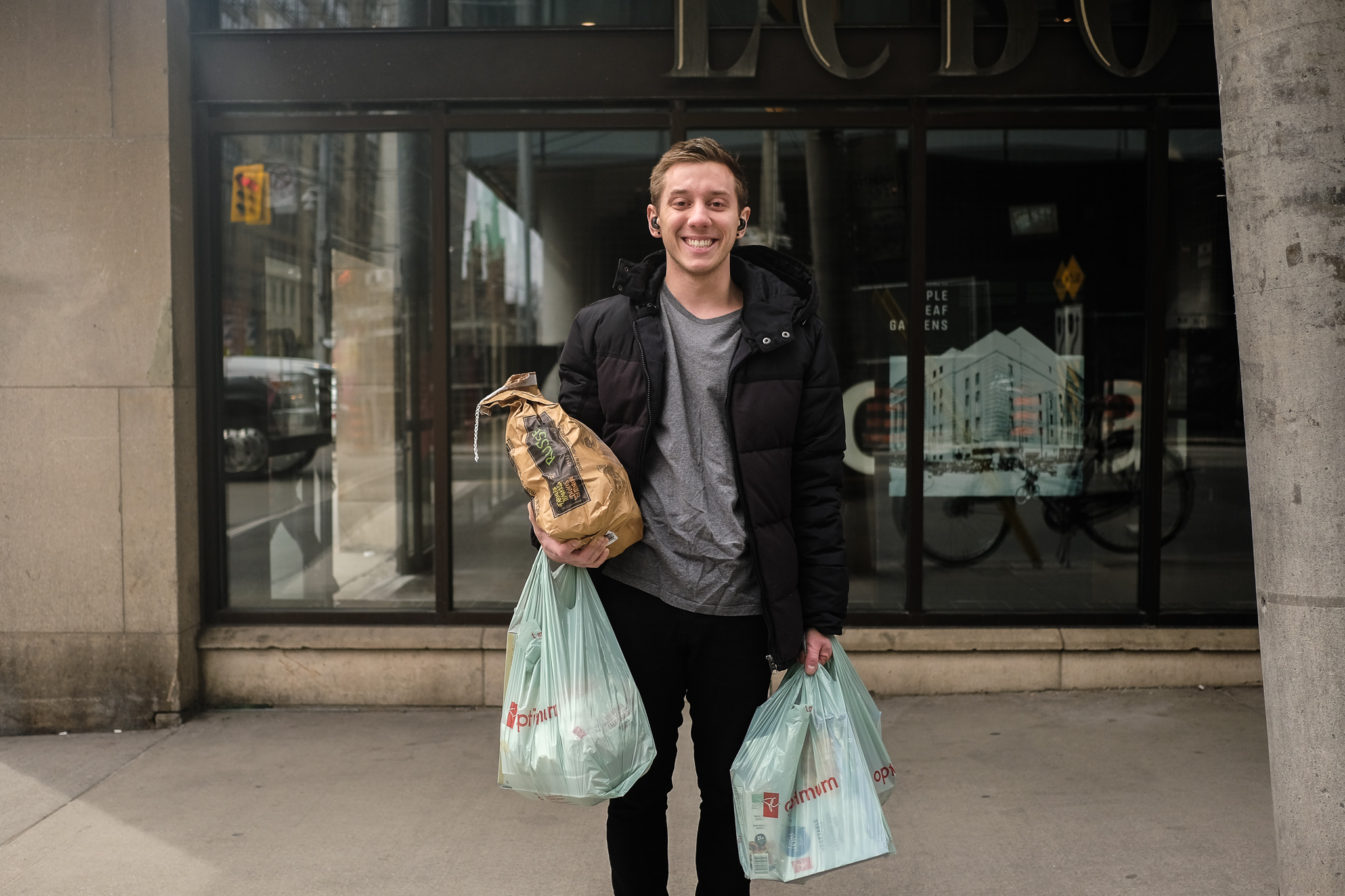 What did you stock up on?
I’m just getting regular groceries, I’m not stocking up. I’m not worried about coronavirus at all. I don’t care. Obviously I’ll do my part to keep others safe and healthy, but I’m not concerned about getting sick. It’s not going to result in me taking time off work or anything. I do have a bottle of Tylenol in here in case I develop a fever, but that’s all. It’s a totally normal day. 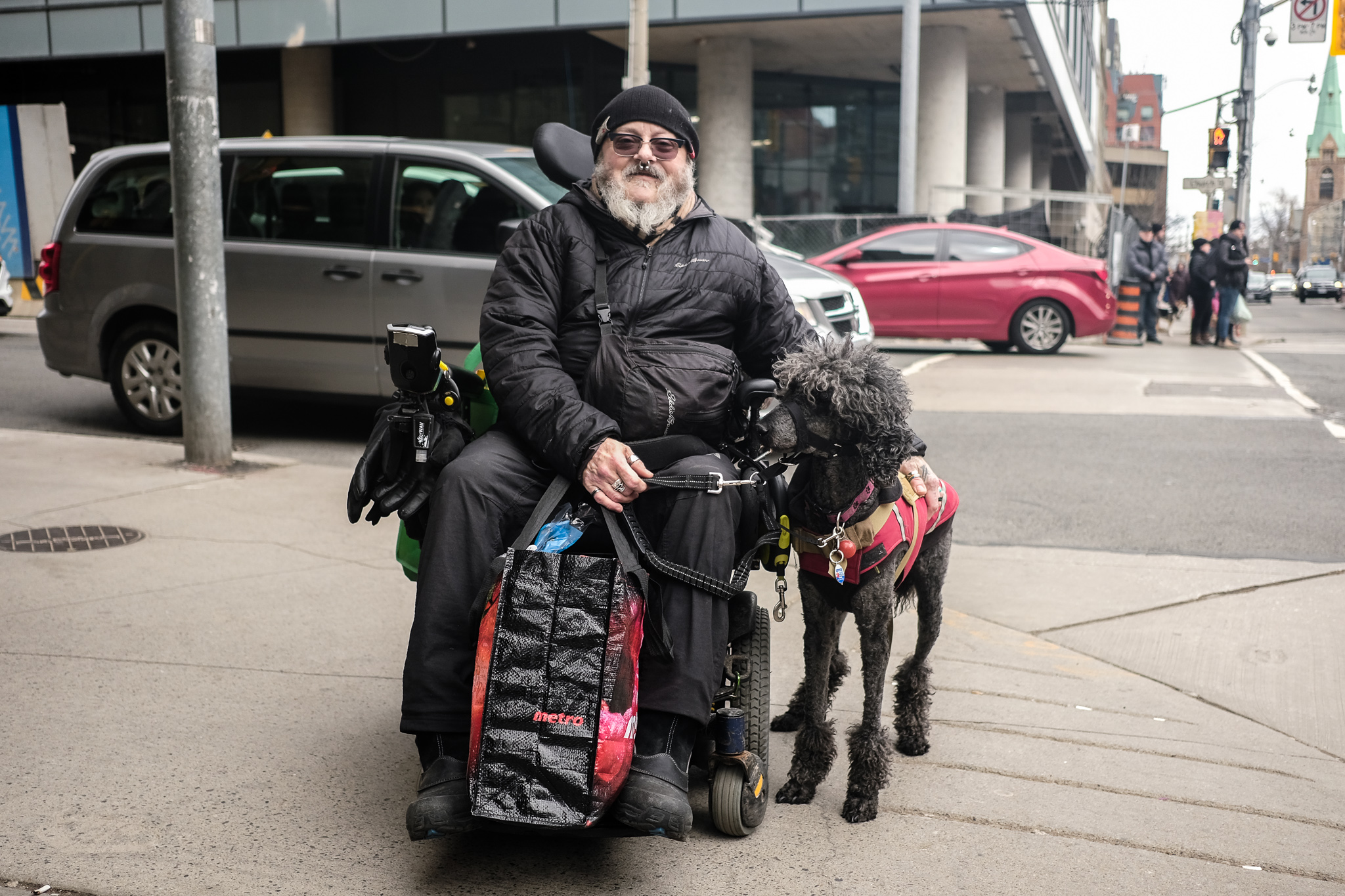 What did you stock up on?
I got some Monster drinks, cereal and bread. That’s it. The only thing extra I bought was a pack of toilet paper because I wanted to be sure I had it.