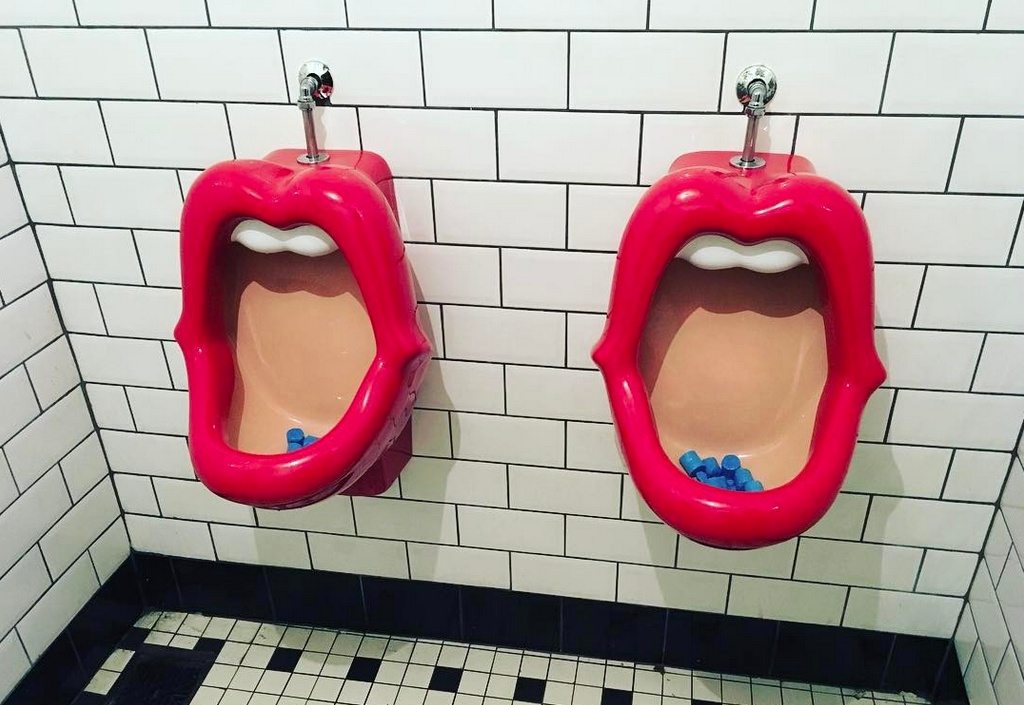 Six years ago, when Instagram was still in its infancy, Dan Schumann noticed the app’s potential to turn mundane objects into objets d’art—with the right filter, an average photo of a leaf on the sidewalk could look like a masterpiece. So, as a joke, Schumann—who is from Townsville, Australia, and now lives in Toronto—decided to post a stylized photo of a toilet to see how many likes he could get. For the next few months, he continued posting porcelain thrones, slowly building a following along the way.

Now his Instagram account, Toilography, has over 6,100 followers and nearly 700 photographs of weird, wonderful and sometimes downright dank bathrooms. Schumann has travelled to the United States, Ireland, South Korea, Japan, Chile, Australia and Malaysia to capture the world’s most interesting bathrooms, from Beyoncé-tiled stalls and Dr. Who tributes to urinals shaped like cherry red lips and walls covered in framed photos of customers’ pets. Here, Schumann shares the stories behind eight of his favourite toilets.

Ladies and gentleman, let me present to you the Holy Grail of toilets! ?? Entitled 'America' (2016), it's a fully functional & usable 18 karat gold throne by artist Maurizio Cattelan on display at New York's Guggenheim museum. "This work makes available to the public an extravagant luxury product seemingly intended for the 1 percent." It doesn't get much better than this ?

This golden throne was on Schumann’s to-photograph list as soon as the Guggenheim started displaying it in 2016. Created by Italian artist Maurizio Cattelan, the fully functional toilet is cast from 18-karat gold and located in the museum’s fourth-floor bathroom. “Maurizio took out an existing toilet from the Guggenheim and replaced it with this one to give people who aren’t part of the one per cent an idea of what that life is like,” says Schumann. “There’s a bit of a line-up to get in, and there’s a security guard that stands by the door to make sure no one destroys it.”

A return visit to the Montreal institution that is L'Avenue! These guys have gotta have the greatest blacklit toilet out there

“I think Montreal is the best city in the world for toilets,” says Schumann. His favourite is at the diner L’Avenue. The black-lit bathroom’s walls are covered in cartoons of Felix the Cat, Bruce Lee, Tigger and this anamorphic cigarette box. “It’s almost like a fantasy nightclub inside.”

Glow in the dark toilet at @_houseofvr! Toronto people, ya gotta check this place out. Happy Canada Day everyone!

One of Schumann’s favourite toilets is in an intergalactic bathroom he recently stumbled into at House of VR, a new virtual reality lounge in Toronto. After playing with their headsets for 45 minutes, Schumann went to the bathroom and discovered it was covered in glow-in-the-dark paint that’s illuminated by black lighting.

On a flight to Vancouver, Schumann read a story in En Route about German restaurant Bauhaus’s cool bathroom graffiti, which was done by the Spanish art duo Olliemoonsta. “Most of the time, when you see graffiti in the bathroom, it’s something that people have added over the course of a couple years,” says Schumann. “This place hired street artists for that specific purpose.”

This was unexpected. A toilet cactus garden on the patio at the Double Wide!

During a flight to Australia, Schumann had a 10-hour layover in Dallas and decided to explore the city’s bathrooms. He had seen photos of the toilet garden patio at Double Wide, a Dallas bar, and knew he had to check it out in person. “Planting flowers and making little gardens in toilet bowls or the cisterns seems to be a pretty common thing,” says Schumann. “I’ve seen a lot of toilets with flowers in them.”

A few years ago, Schumann went down to Charleston for a Hootie and the Blowfish concert. He took a tour of the Charleston Distilling Co. and found this bathroom inside a gigantic whiskey barrel. “Sometimes you see whiskey barrels or beer kegs converted into urinals, but this was the first time I saw the barrel as the outer shell of a toilet stall.”

For my 300th Toilography post, here is a lovely #toilet garden I saw within the grounds of Mr. Toilet House in Seoul a few months ago. Bring on the next 300 toilets!

In 2014, Schumann visited Mr. Toilet House, a museum outside of Seoul dedicated to all things toilets. Originally, the museum was the home of the local mayor Sim Jaeduck, who was so passionate about public sanitation and hygiene that he founded the World Toilet Organization. When he passed away in 2009, his family turned his home into an official museum, which now features exhibitions about toilets through the ages and multiple bathroom-related sculptures, including a golden poop at the entrance.

Another pic of the brilliant college washroom I saw yesterday. Check out the blog at toilography.com for a bunch more!

Schumann’s all-time favourite bathroom is at Montreal’s Cégep de Saint-Laurent. Some Redditors tipped him off about it, and he was immediately floored when he saw the stalls for himself. “Over the past 20 to 30 years, the graffiti has just been layered on. Every inch is covered in this amazing, colourful graffiti,” says Schumann.