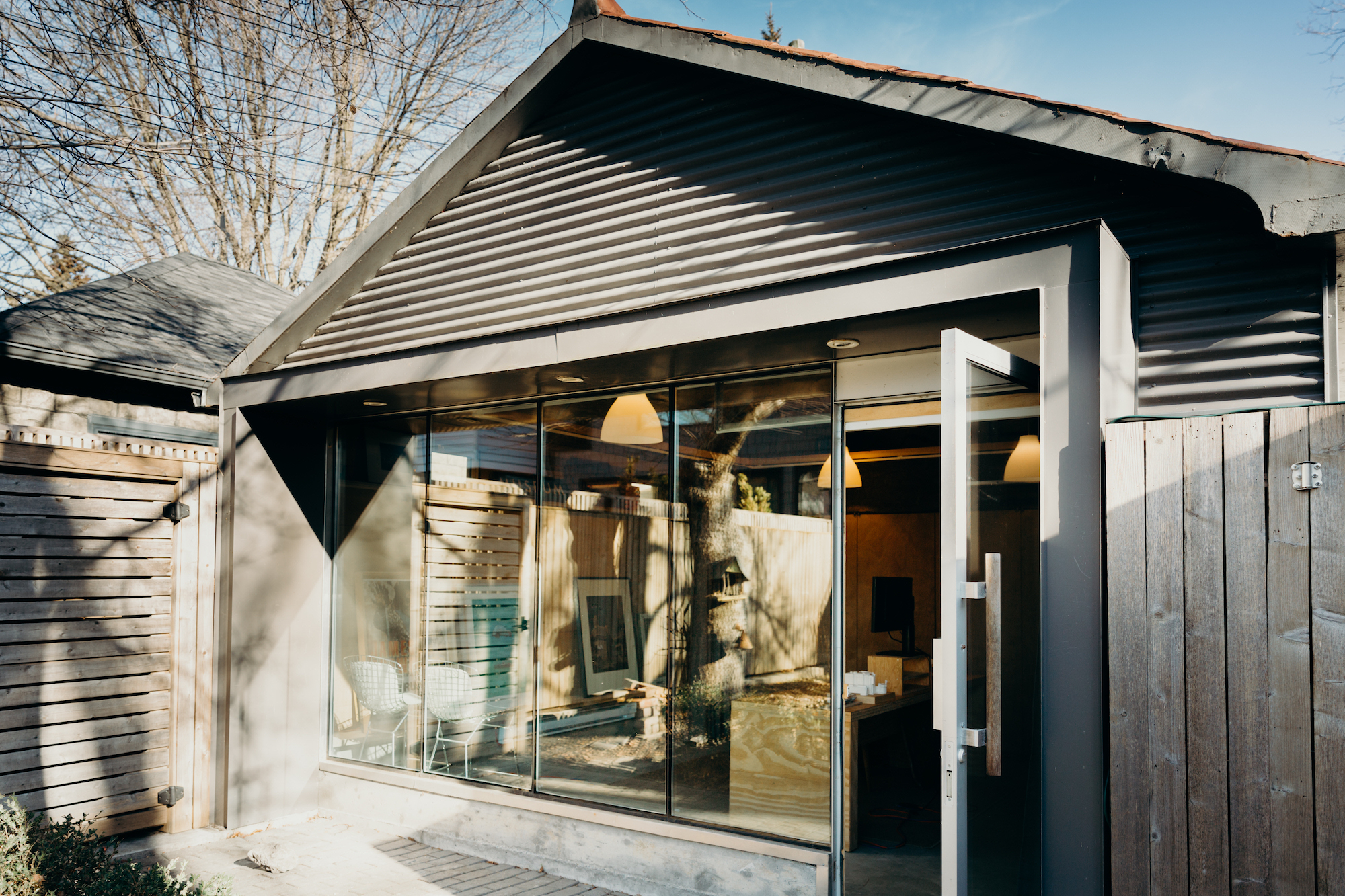 Gary McCluskie, an architect at Diamond Schmitt, and his wife, Barbara McLean, an architect at city hall, bought their corner-lot bay-and-gable home in High Park in 1994. Over the following two decades, the couple had three kids—Kaitlyn, 25, Cameron, 23, and Alex, 21—and updated their home piecemeal as they went: renovating the basement into a kids’ zone first, then rebuilding bathrooms and converting the third floor into their own retreat.

In 2017, Gary and Barbara embarked on an ambitious reno with contractors Webb and Lashbrook. They planned to relocate the main entrance to the south side, where sliding windows would flood the house with morning light. They wanted an enclosed porch, which would house a new dining room, and a new addition at the back with a breakfast room.

At the same time, they hired Raymond A Kerr Contracting to revamp the 400-square-foot garage. It got new footings, insulation, baseboard heating and concrete floors so Gary could use the space for his woodworking hobby. Interior renovations were completed in January of 2020.

In the early months of the pandemic, Kaitlyn and her boyfriend moved in with her parents, as did Cameron. They were all working from home, and things were feeling a little squished. “We had five people working in three bedrooms, a basement apartment and the garage,” Gary says. To keep the chaos at bay, the ground floor was reserved for eating together and hanging as a family.

Gary decided to tweak his woodworking space so it could do double-duty as an office. In the summer of 2020, he refurbished the space himself using $1,000 worth of materials from Home Depot and IKEA.

Now, he spends his entire week in there, working at his computer during the weekdays and chipping away at his woodworking projects on weekends. Last fall, when Alex visited from the University of Waterloo, the garage added a new function. “We threw a mattress on the floor and it became an overflow bedroom,” Gary says.

The defining feature of the metal-clad garage is the large west-facing window wall overlooking the garden: 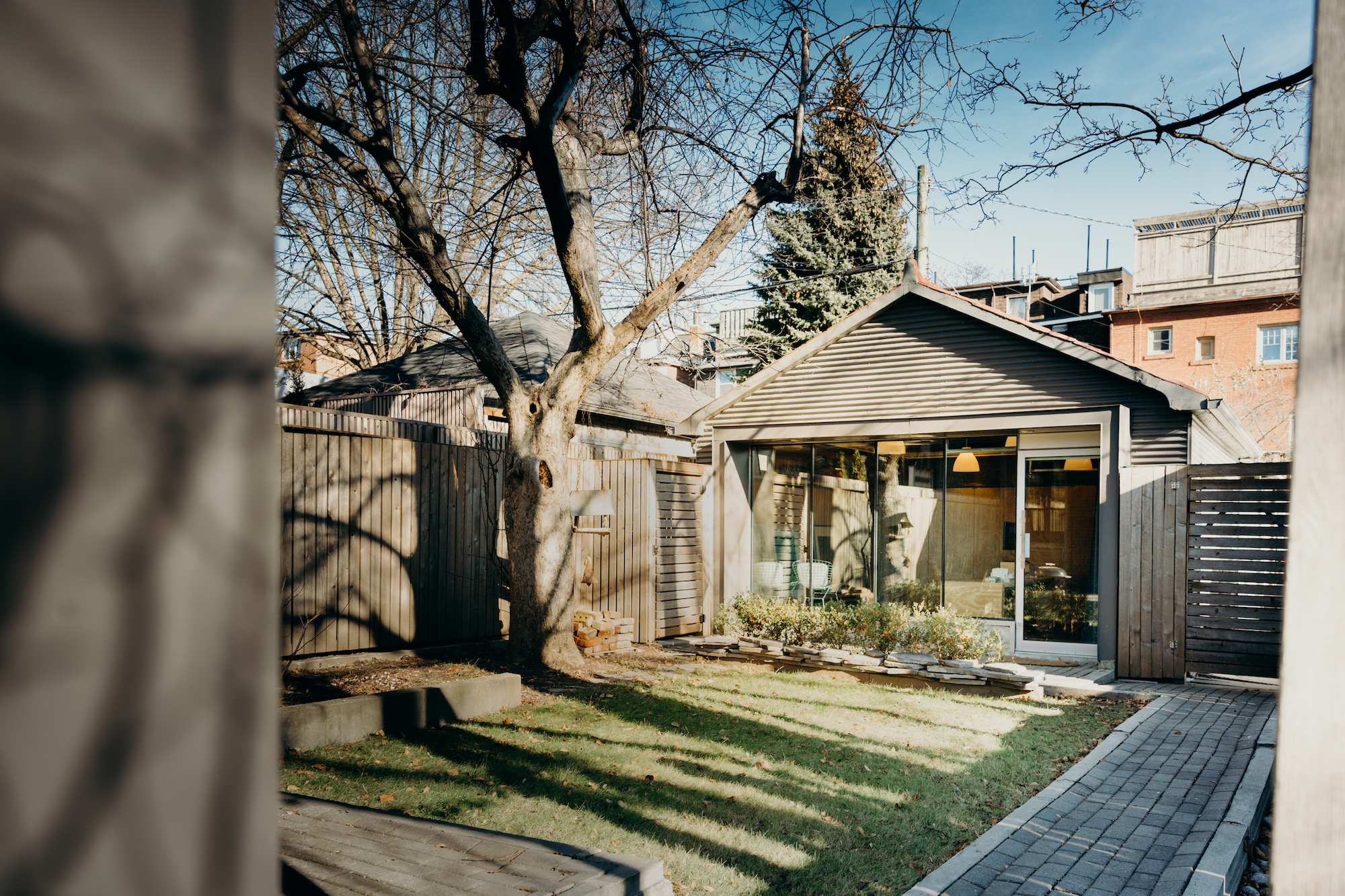 Gary added IKEA pendant lights and wall washers to a ledge display wall. “I liked the colour and warmth of the wood and the rafters,” says Gary: 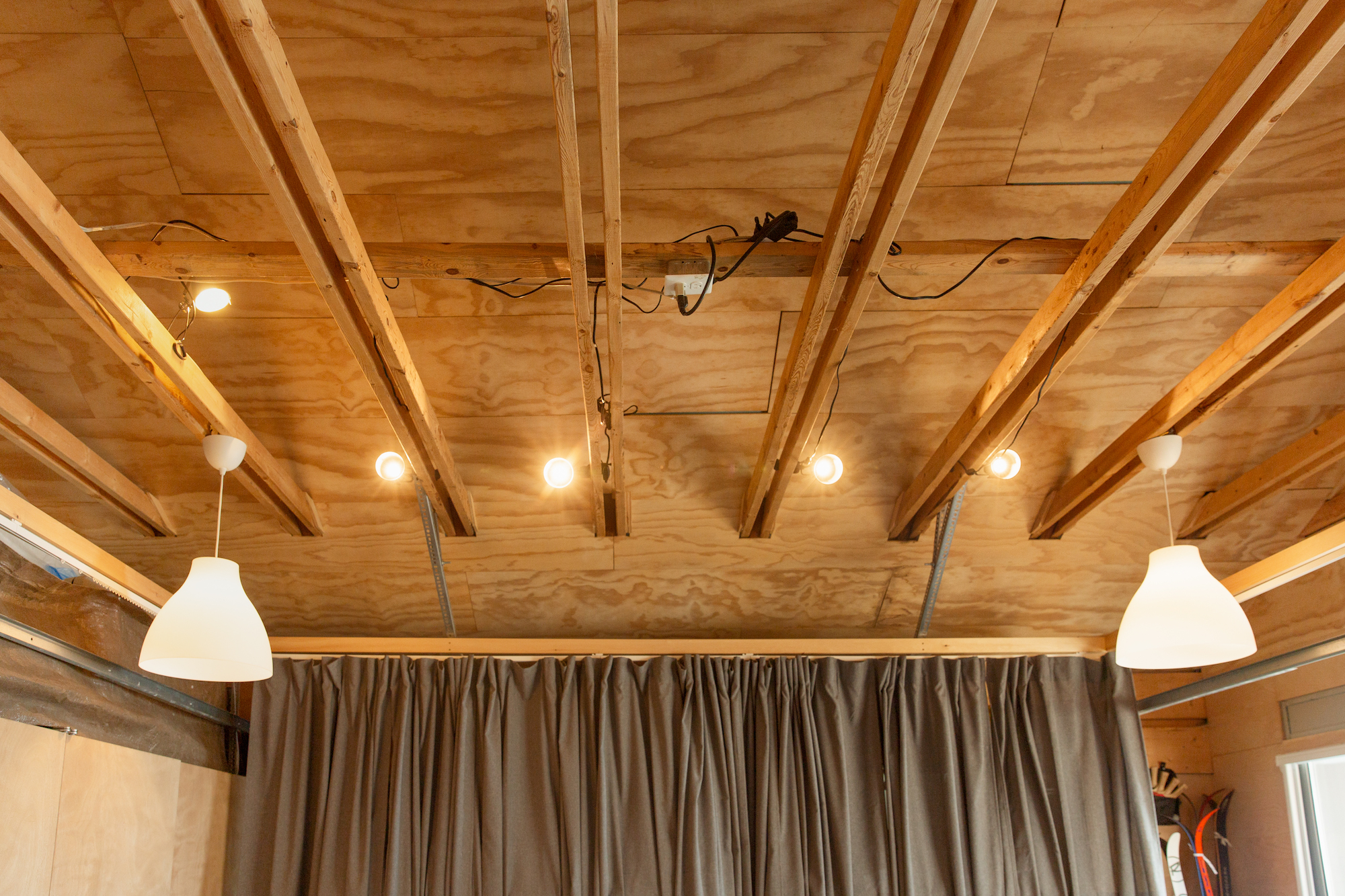 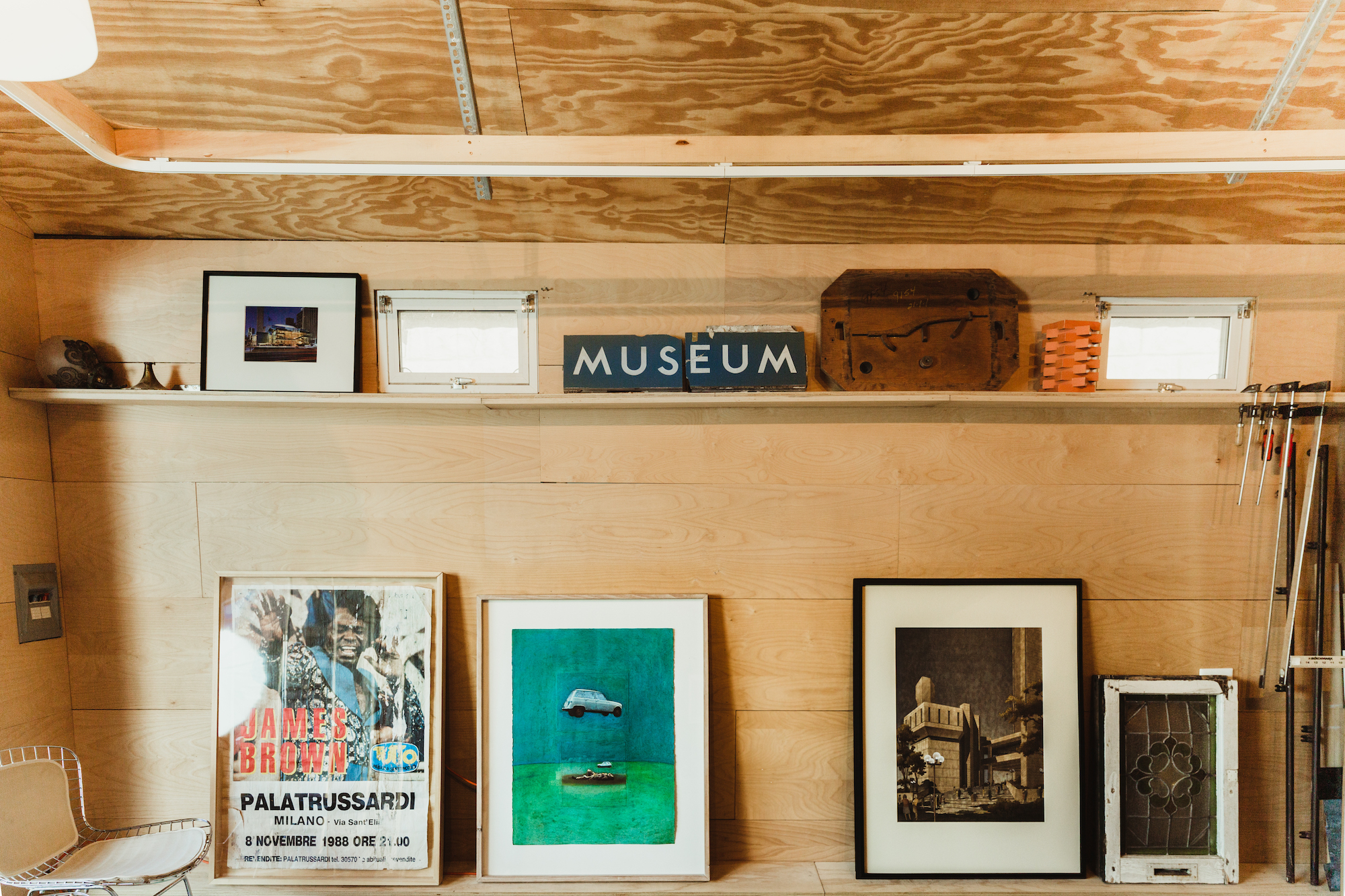 He also lined the walls with plywood: 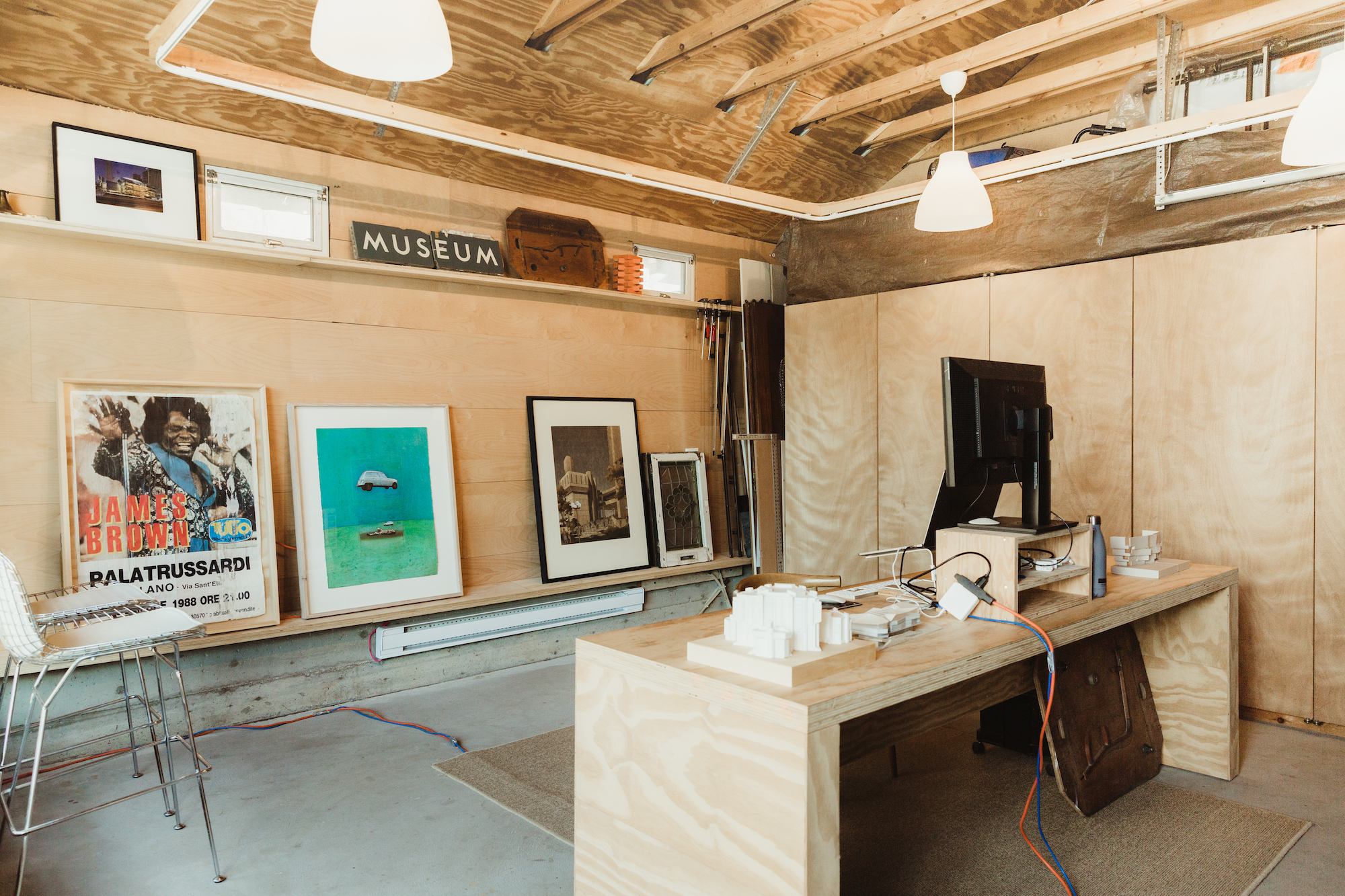 Gary built the six-foot desk with two stacked layers of plywood. It’s strong enough to double as a wood-working surface: 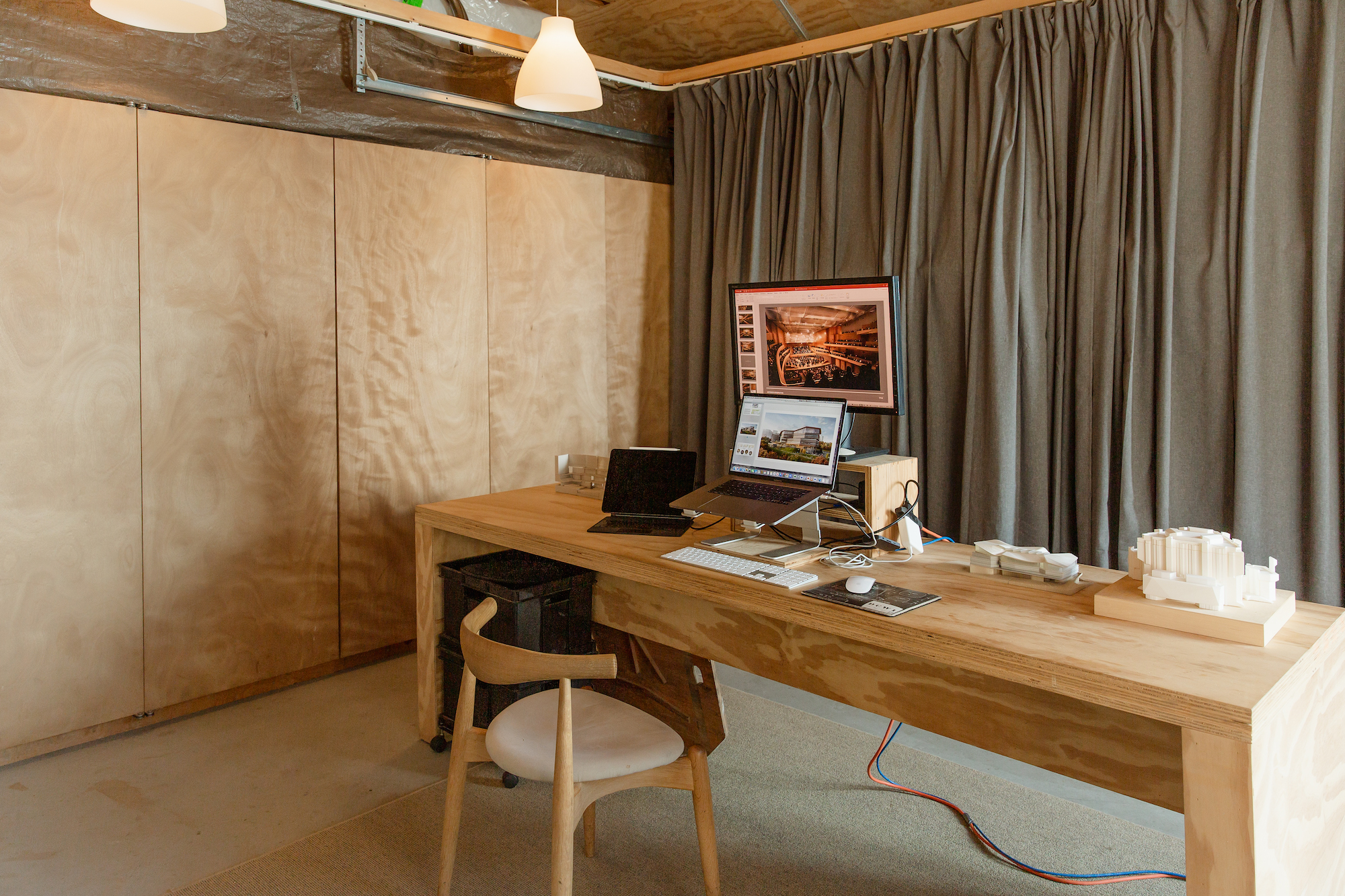 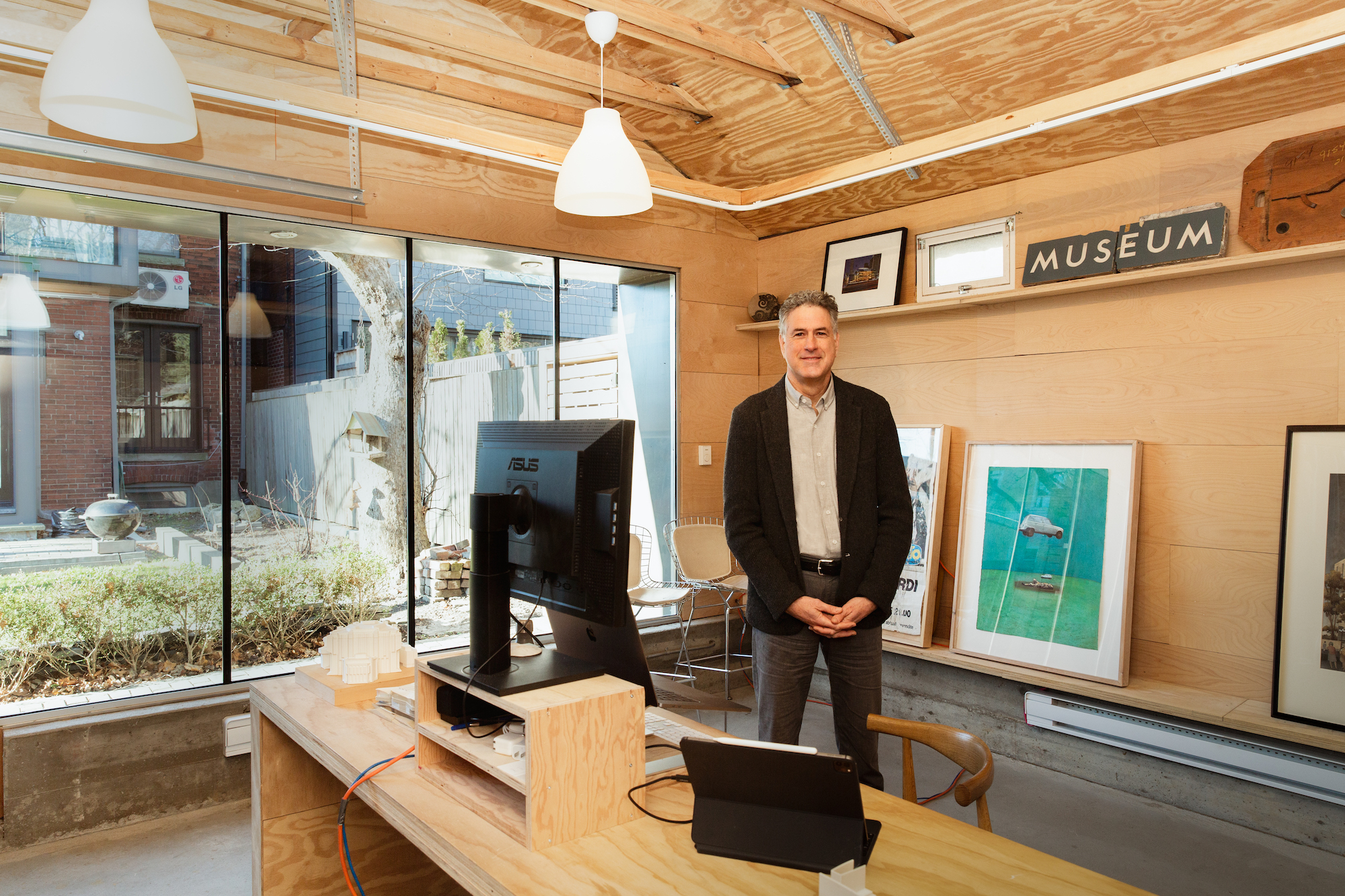 He can close off the space with the privacy curtains, which run on a four-sided track. “It can get too hot in here with the late-afternoon sun,” says Gary. It also creates a cozy guest room in a pinch: 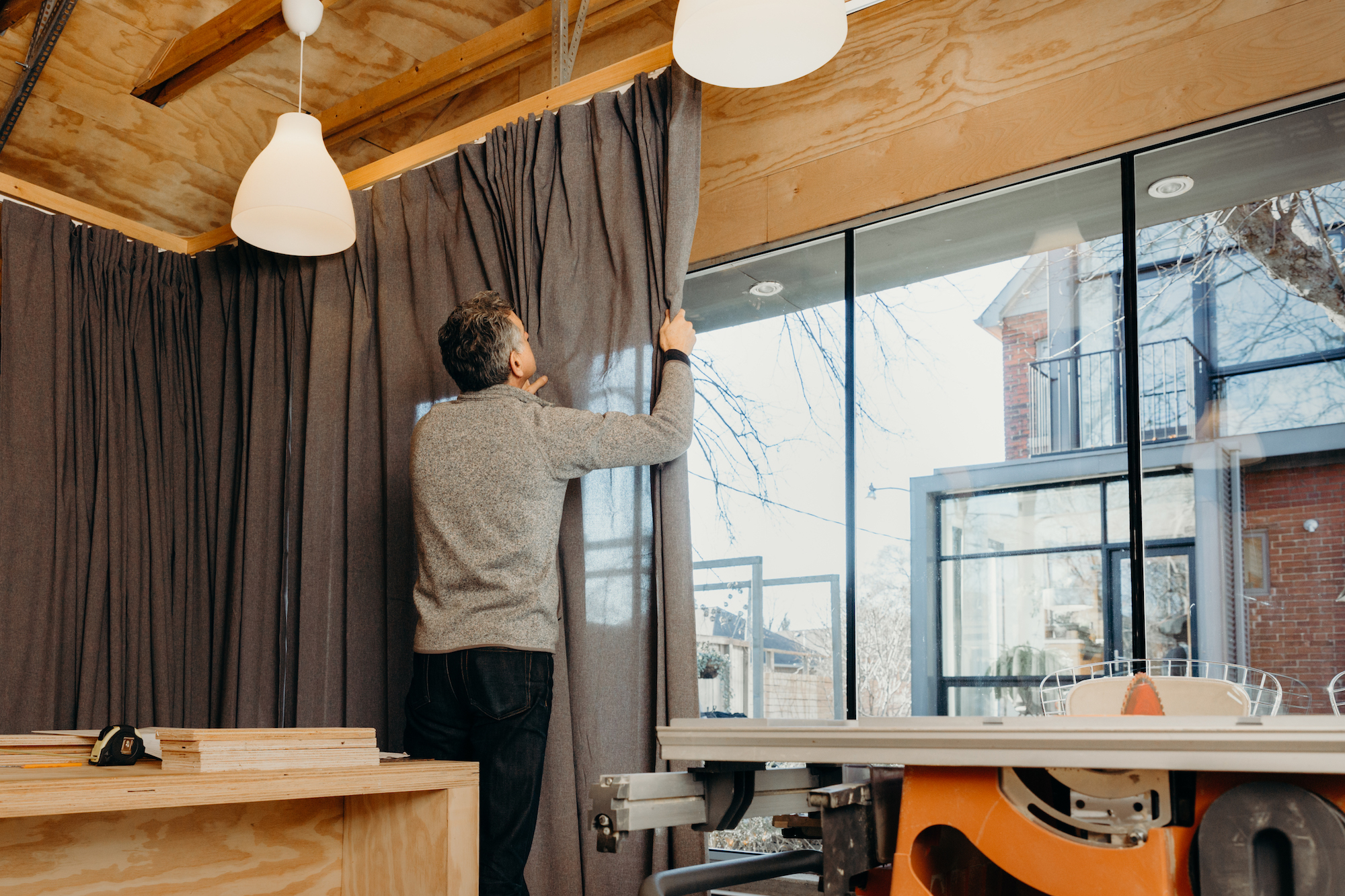 The IKEA stools are for when family members hang in the studio: 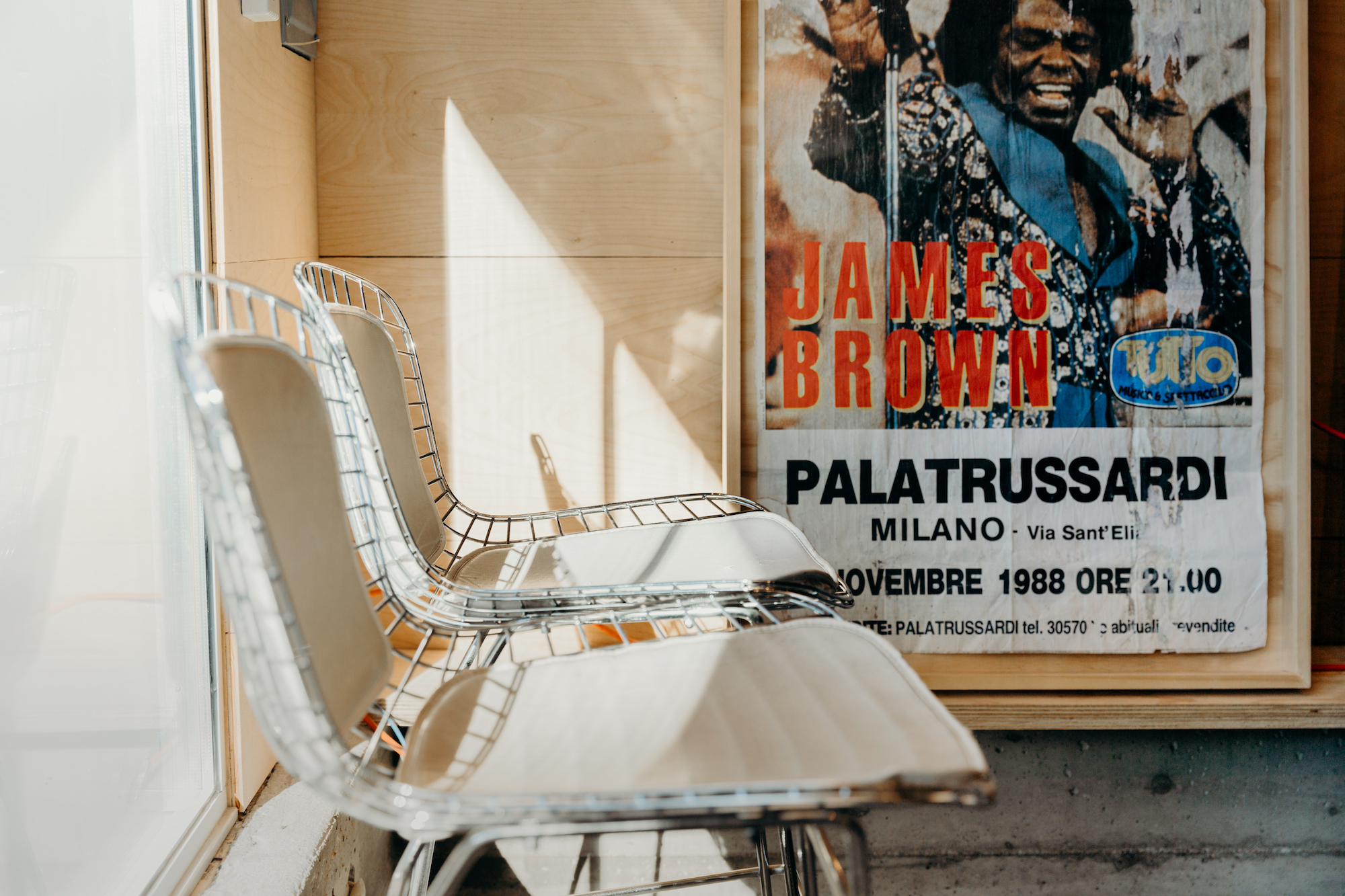 Diamond Schmitt is designing the new addition for Robarts Library at U of T. Gary keeps a model of the project on his desk alongside an original rendering of the library. He’s also working on the New York Philharmonic’s David Geffen Hall at Lincoln Center and Ottawa’s new central library, Adisoke: 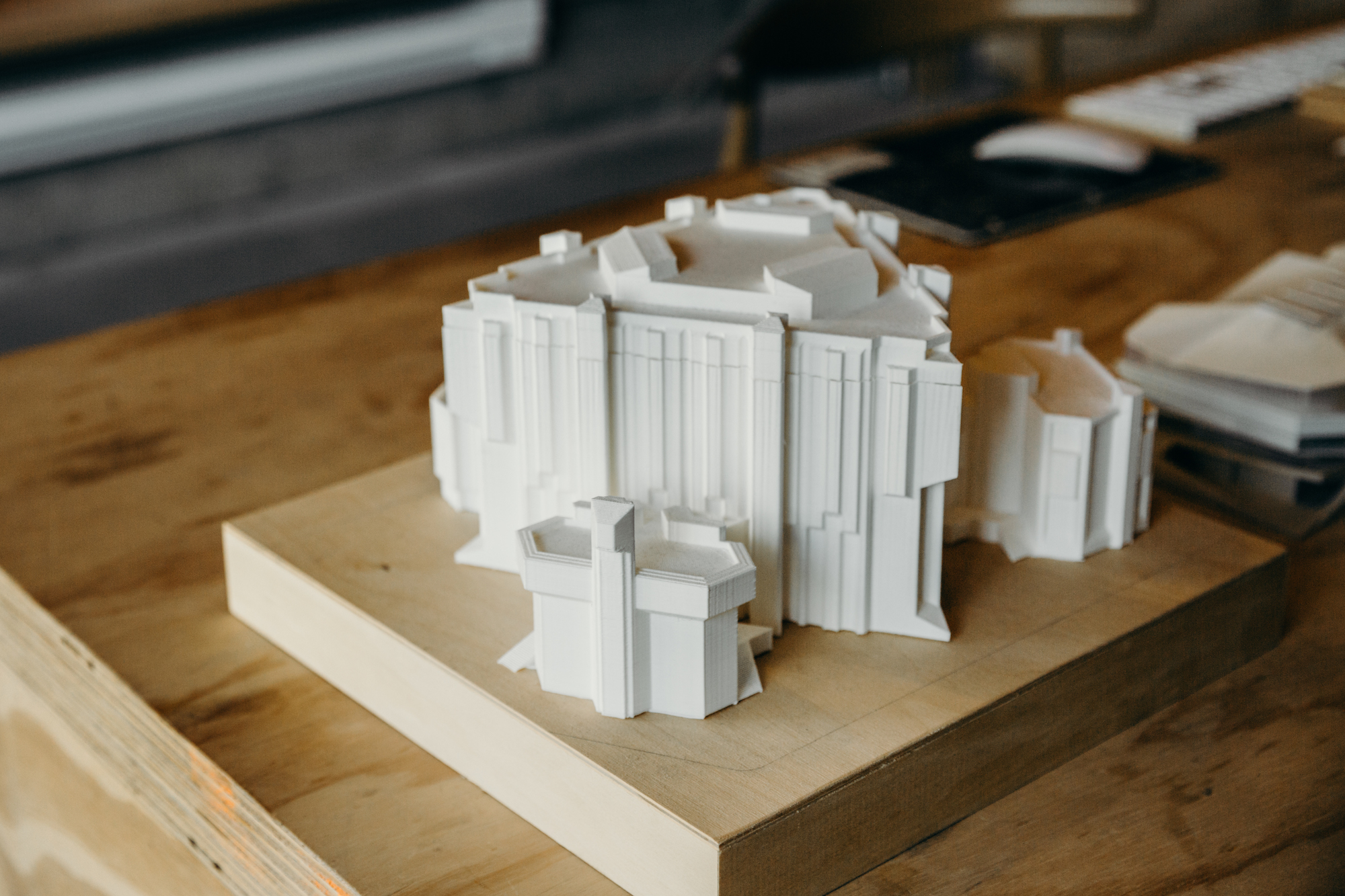 The James Brown poster is from his friend Chris McCormack, who tore it off a lamppost in Rome and anonymously mailed it to Gary in the late 1990s: 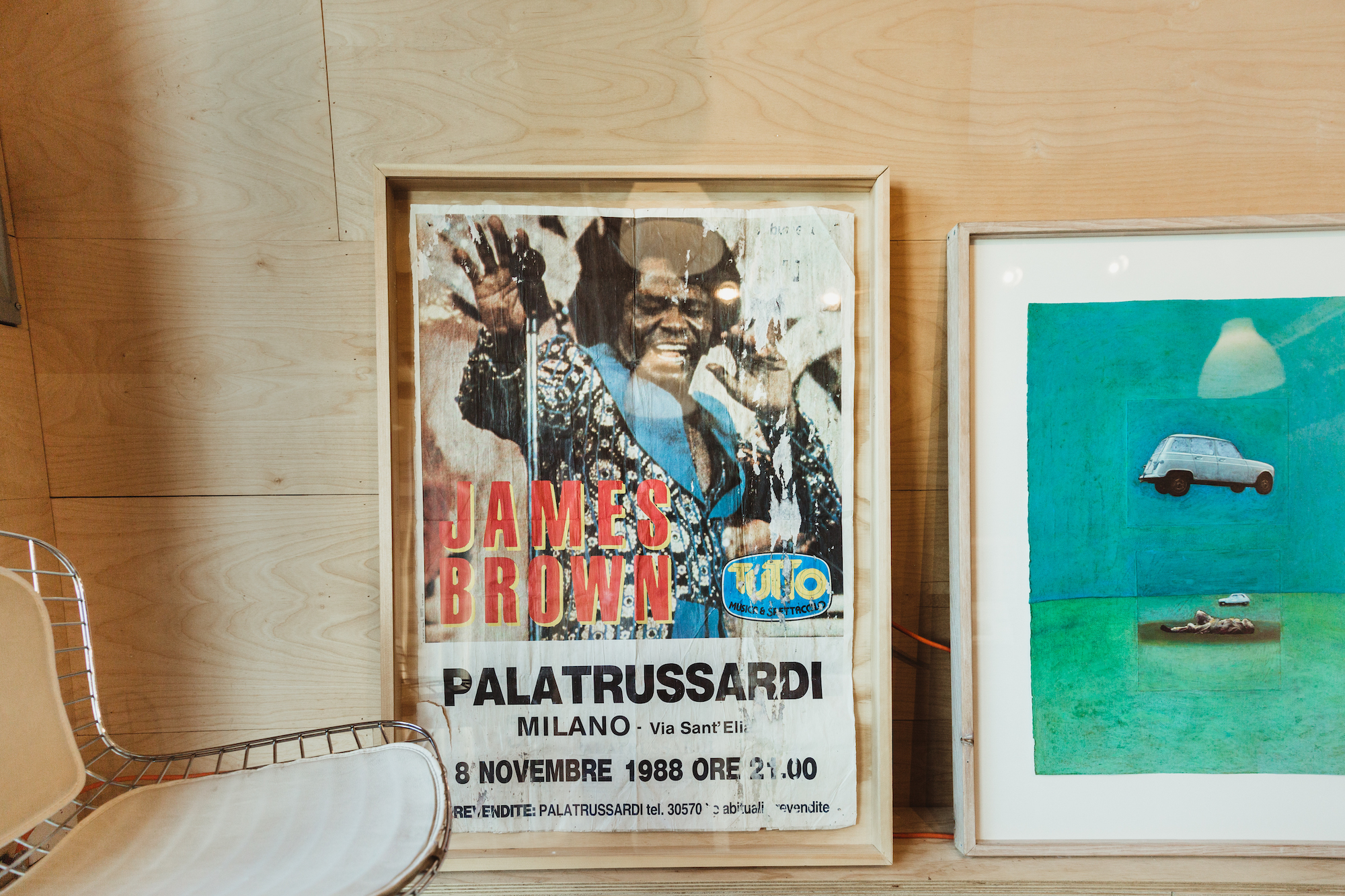 The ceramic-tile sign is a memento from when Diamond Schmitt renovated Museum Station. It used to be embedded into the station’s walls: 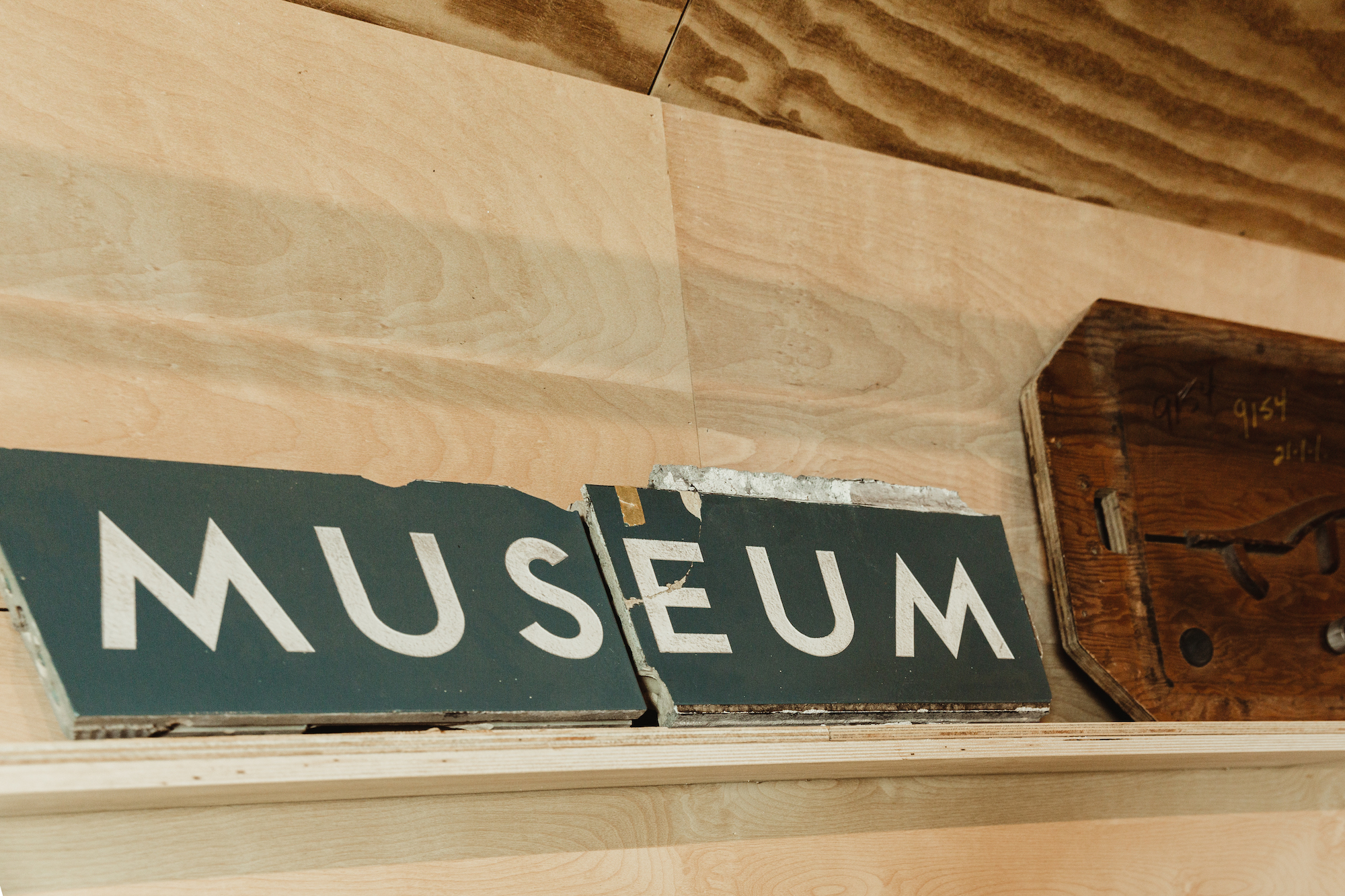 On weekends, Gary tucks his computer away, then cranks the James Brown (his favourite songs are “I Feel Good” and Get On Up”). His table saw collapses out of a cupboard, transforming the space from office to workshop: 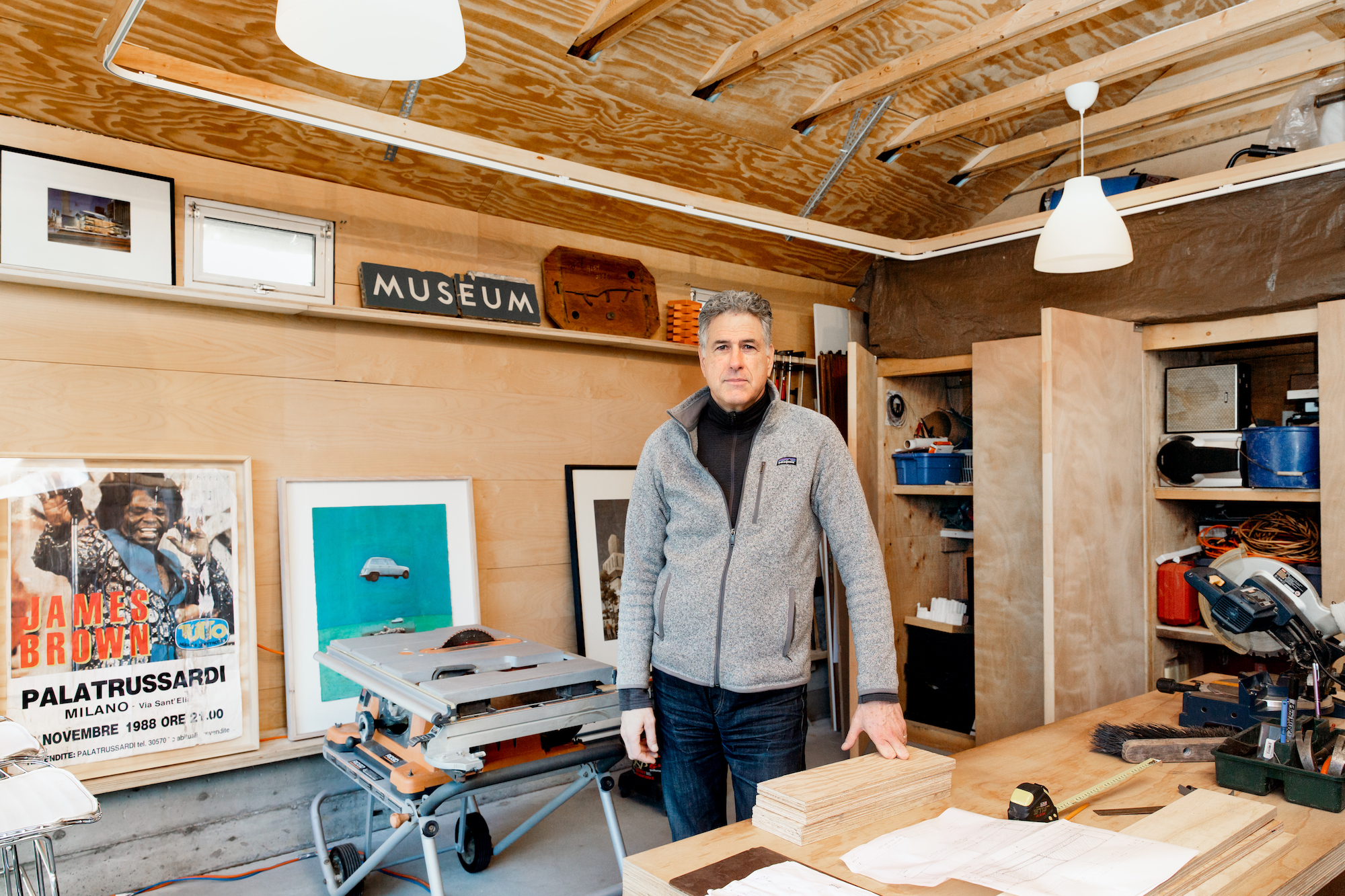 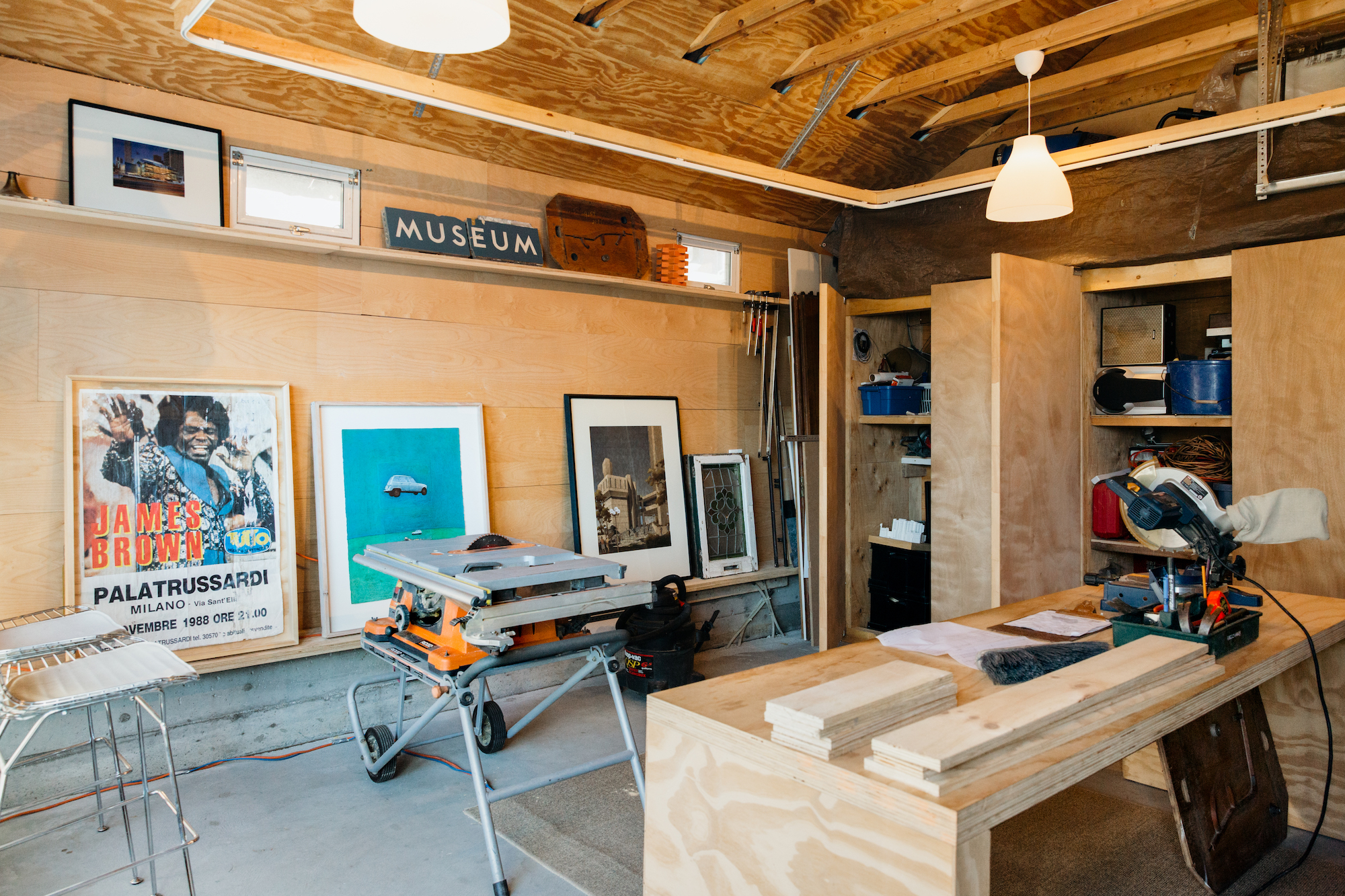 He uses the workshop to make furniture. So far, he’s built benches, the desk and a bed frame: 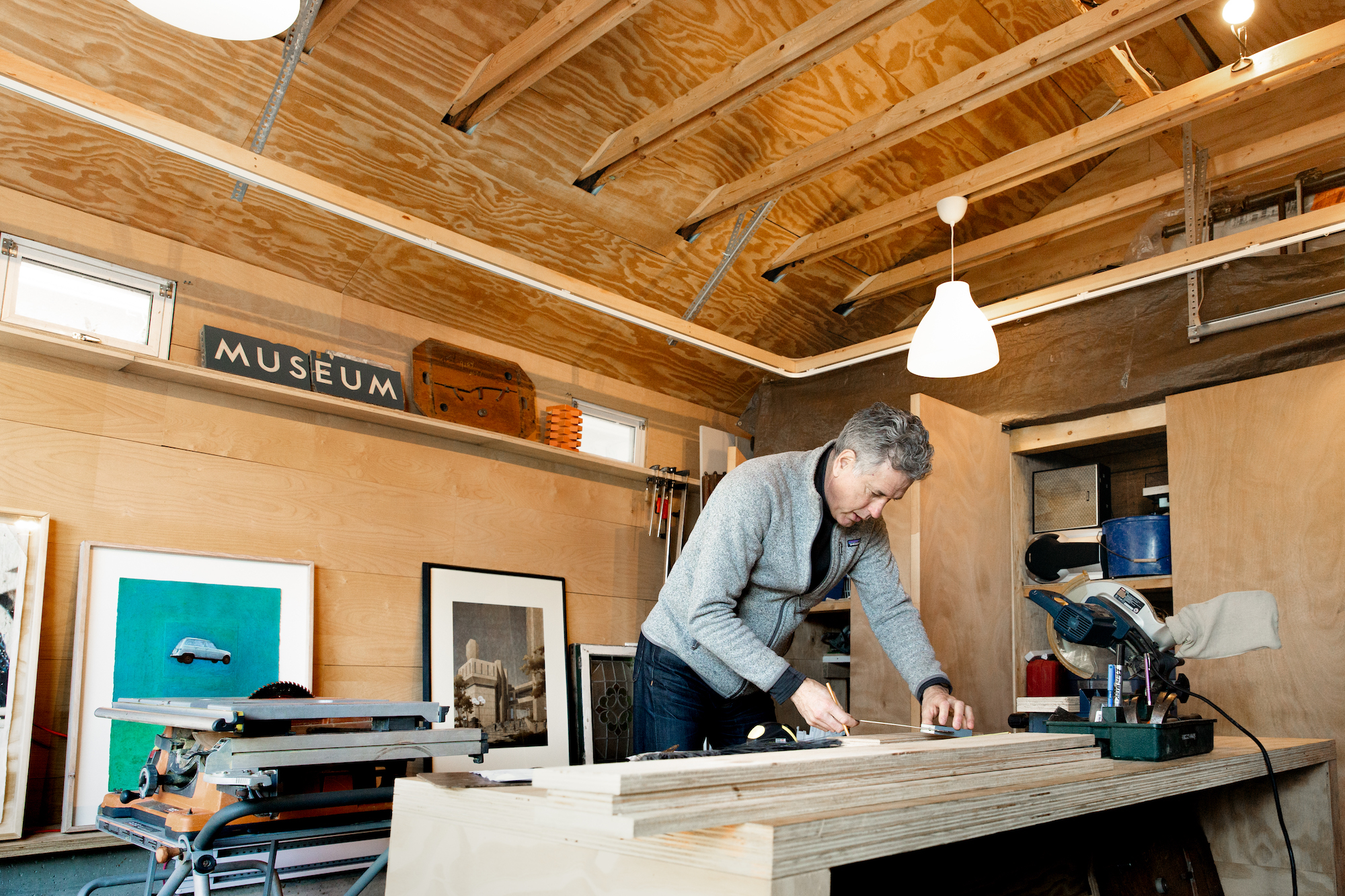