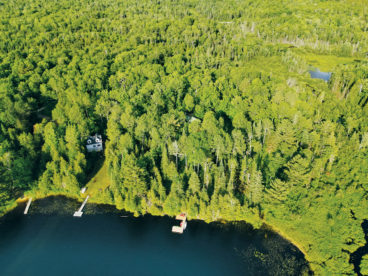 Is it possible to score a reasonably priced cottage within a few hours’ drive of the city? We swept the province in search of bargains and found recently purchased gems in overlooked places. Where to get a piece of paradise for less

Is there anything more Canadian than going to the cottage? That ritualistic escape from the noise, crowds and stresses of the city? Cottage country offers a serene environment where urbanites can commune with nature—and with a cocktail or two on the dock. Of course, the national love affair with cottaging isn’t new. Neither is the fact that most cottages are wildly out of reach financially, market cooldown or not. As of May, the median price for waterfront properties in the Muskoka Lakes area was $1.7 million, an increase of 135 per cent since before the pandemic. Every inch of that region, plus Georgian Bay and the Kawartha Lakes, has been scouted, assessed and appraised multiple times over, which means the deals are long gone. But they’re not the only game in town.

Ontario has lots of lakes. So we drew a 300-kilometre radius from the CN Tower and went looking for dockside deals. We pored over the listings and sales data; interrogated recent buyers, real estate agents and local experts; and came away with three gorgeous, underappreciated areas—namely, Bancroft, Magnetawan and Port Elgin. We found an Albion Lake four-bedroom cottage that recently went for just $359,000 and a couple who bought a charming three-bedroom retreat in Bancroft for $642,000. They’re not all rock-bottom prices, but they’re good deals for what you get.

Of course, the tradeoff—a little extra time on the highway—isn’t nothing, especially with gas prices where they are. But the dock, the water and the campfire have a way of melting those worries away.

Northeast: When city life became too much for this couple, they decamped for Bancroft to enjoy a slower pace.

North: The Ojhas had great childhood memories of the Delhi countryside. They wanted a place where they could make new ones with their son, and they found it in Magnetawan

Northwest: When Steve and Vanessa Rempel happened upon a For Sale sign in Port Elgin, they pounced

This feature package appears in the August 2022 issue of Toronto Life magazine. To subscribe for just $24.99 a year, click here. To purchase single issues, click here.