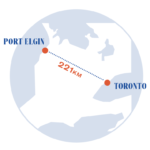 When Steve and Vanessa Rempel happened upon a For Sale sign in their favourite vacation spot, they pounced

On their first date, Steve and Vanessa Rempel bonded over martinis in Little Italy. And, when they shared their life goals with each other, cottage ownership topped the list.

Vanessa, an actor, had spent summers lounging on docks in Muskoka and Haliburton. And Steve, who’s now a general manager at Porsche of London, regularly visited Port Elgin and was a fan of the region. It’s in the town of Saugeen Shores, a triangular tract located 220 kilometres from Toronto in Bruce County. Vanessa was unfamiliar with the area, but after Steve introduced her to it, she was hooked. “Port Elgin has the best sunsets,” she says. 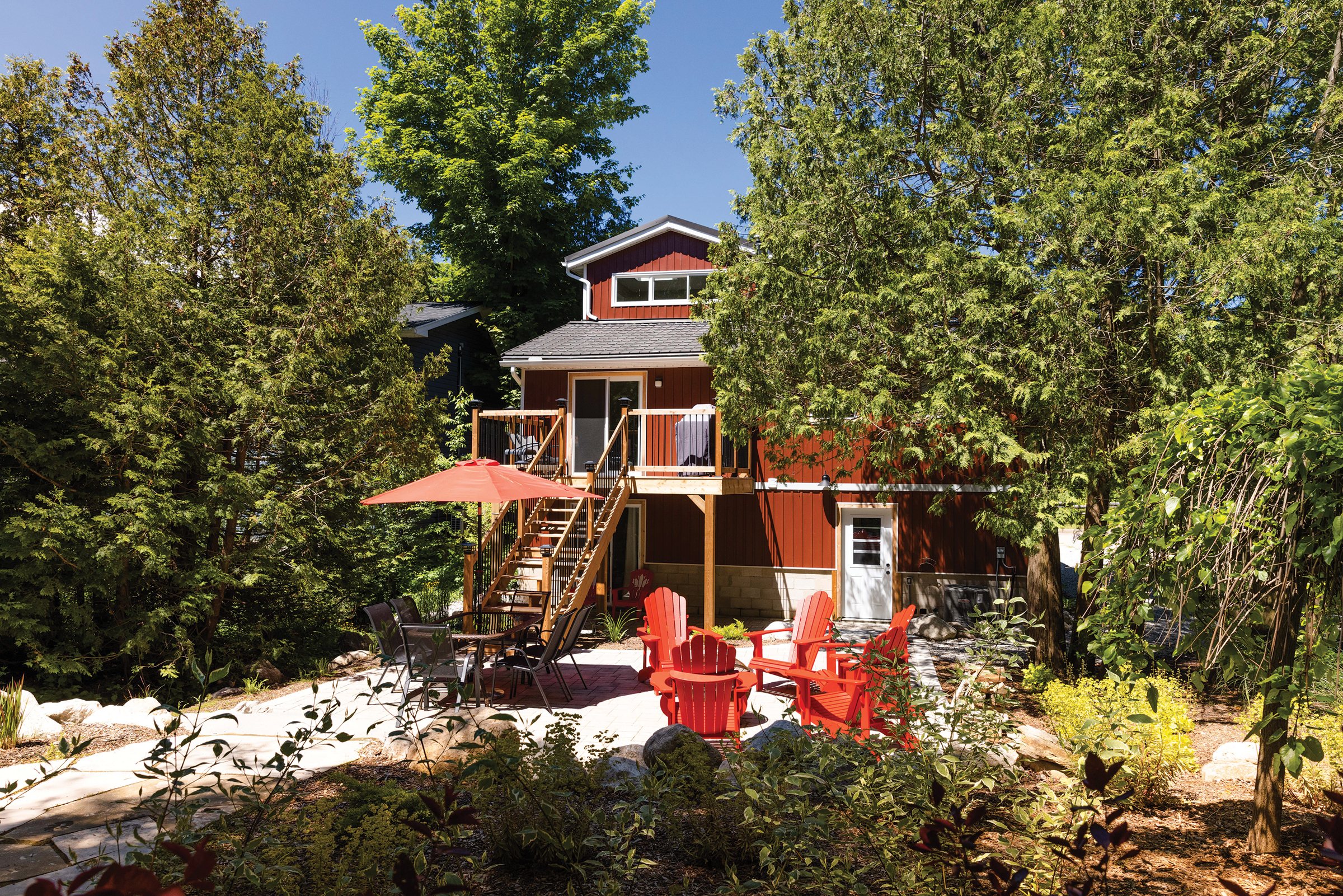 The couple—now married with three young kids (Minnie, Nash and Charlotte) and two dogs (Rosie and Luna)—visited Port Elgin every July for five years running, renting the same cottage on a secluded tree-covered lane. Upon arrival, they would change into bathing suits and dash to the nearby lake or hop on bikes for a spin down Shipley Trail. But last July was different: as they approached the rental, they noticed a For Sale sign next door. Vanessa and Steve pounced. By August, they’d paid the asking price of $799,000 and had their very own Port Elgin retreat.

Renovated from top to bottom, with a stream in the yard and landscaped grounds, the four-season cottage is 1,600 square feet over three floors. It has three decks, four bedrooms and two bathrooms—one with a soaker tub. When they’re not there, the couple rent it out once or twice a month for $475 per night minimum or $3,000 per week. Financially, it was a big purchase, but offsetting the cost with rental income helps. 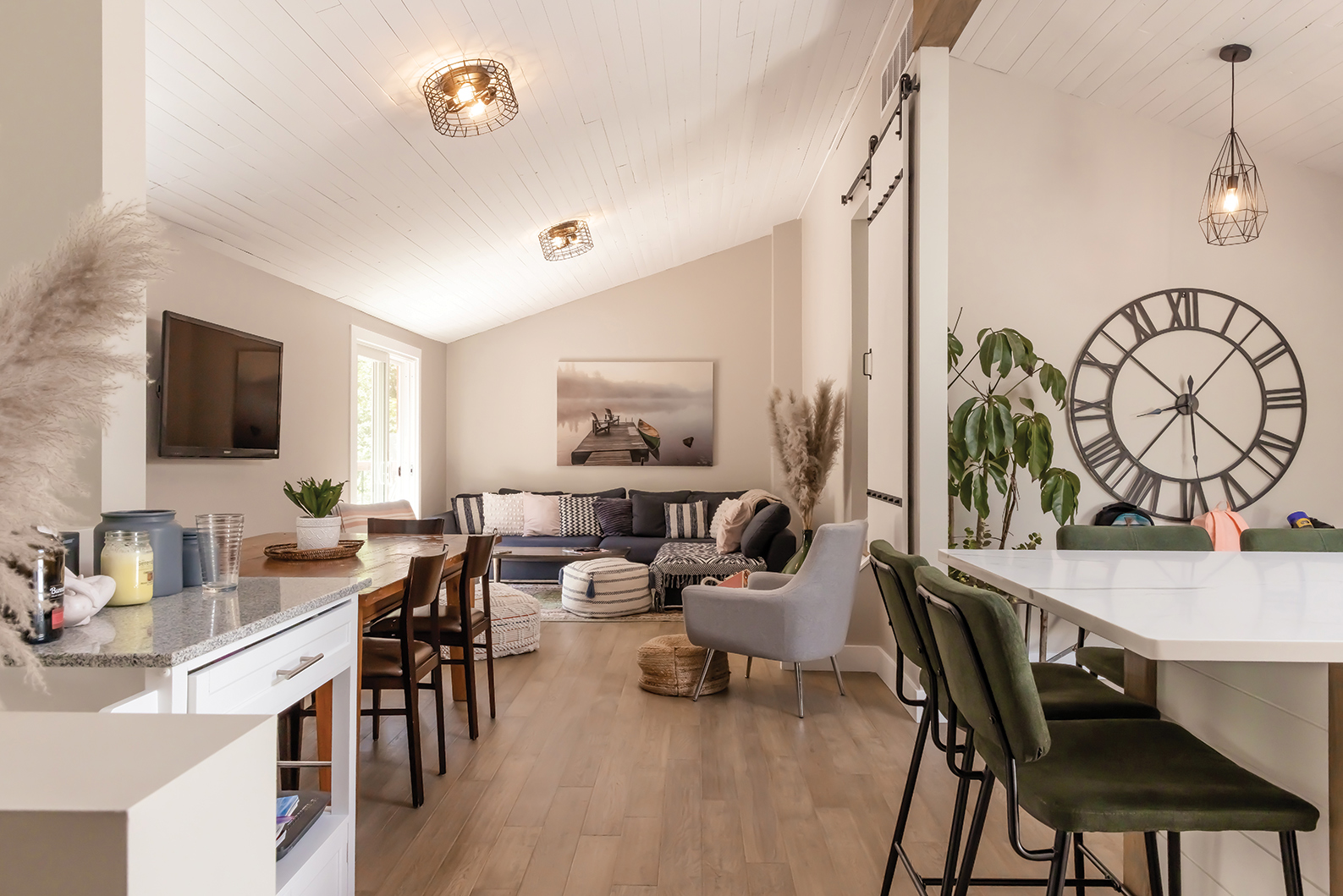 Lake Huron suits the Rempels: the water is waist-deep for a good stretch, which is great for the kids. They hang out at Main Beach and the Port Elgin Harbour marina, which are where all the action is. On a given day, yoga instructors are on the beach, guiding groups through sun salutations, while paddleboarders are out on the water. Goderich Street has everything a weekender might want, including Ashanti Coffee—responsible roasters who make great sandwiches—and To the Moon Bakery, the family’s go-to for smoothies and greasy-spoon breakfasts. The couple often run into friends at the Queens Bar and Grill, housed in a historic building.

Compared with the vast lots of Muskoka, cottage properties in Port Elgin are closer together. Borrowing barbecue sauce and swapping stories with neighbours is part of the charm. “Everyone knows one another. It’s very community minded,” Vanessa says, likening it to the Hamptons—“though not as high-end, obviously.” 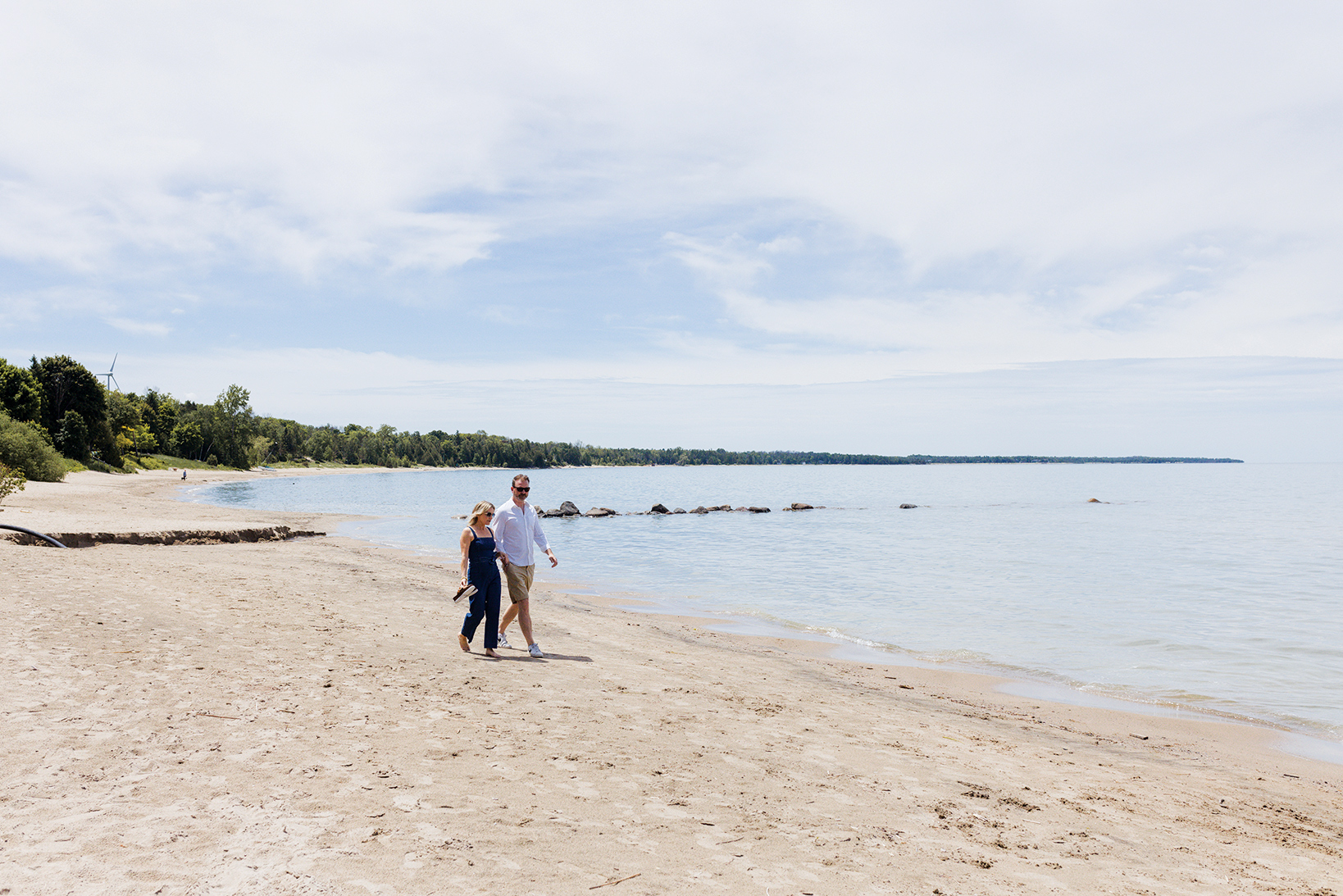 The couple know this purchase was a coup. “It’s rare for a cottage to come up for sale in this spot that feels so private—they’re usually in the same family for generations,” says Vanessa. “We would never have been able to afford a similar cottage in Muskoka,” she adds, which would probably have been double the price. Besides, the lengthy drive from London would have been a deal breaker for them.

Since their place is only an hour and a half from Collingwood, it doubles as their ski chalet in winter, when they hit the slopes at Blue Mountain. 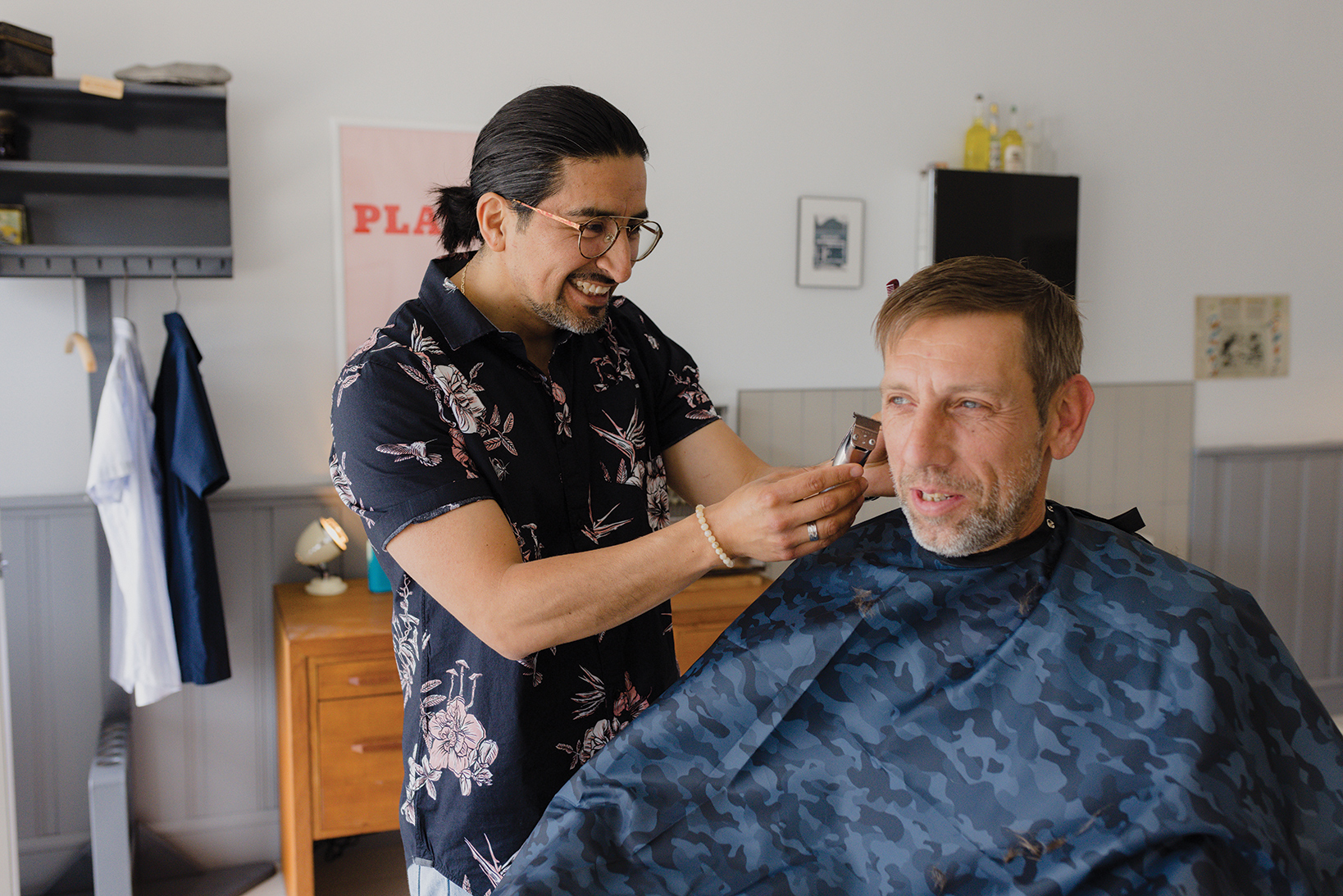 “I’ve been with Claire, my wife, since 2004. When we first got together, we bought a one-bedroom condo in Liberty Village. Then our first child arrived—we now have two—and we needed a bigger place. So we bought a townhouse across the street and slowly traded up every few years. Our dream has always been to own a big bungalow with a deck to lounge on.

“We hunted around Port Elgin because we love the South Bruce Peninsula, Southampton and Sauble Beach. I took up lake surfing during the pandemic. A big part of moving here was the proximity to Lake Huron. We bought a beach house in July of 2020 and a bungalow nearly a year later. Then, last March, we leased a commercial space for my business. I’m opening a two-chair barbershop, Mi Hermano, on High Street—Southampton’s downtown, with all the shops, bars, restaurants, motels. It’s currently in the renovation stage: I’m giving it a retro 1970s surfer vibe. We also have a location in Toronto, on Harbord. My main barber will take on a management role there, and I plan to come to Toronto once a month or so to maintain relationships with clients.

“The beauty of this move, on a business level, is that there seems to be a need for barbershops in the region. I was reluctant at first, but Claire planted the seed. She said, ‘You’ll get to surf on Lake Huron. Why wait until we’re older?’ My kids are in their teens now, and they’re 100 per cent all in on this move—they hike, swim and surf. They are thrilled to be up here.” 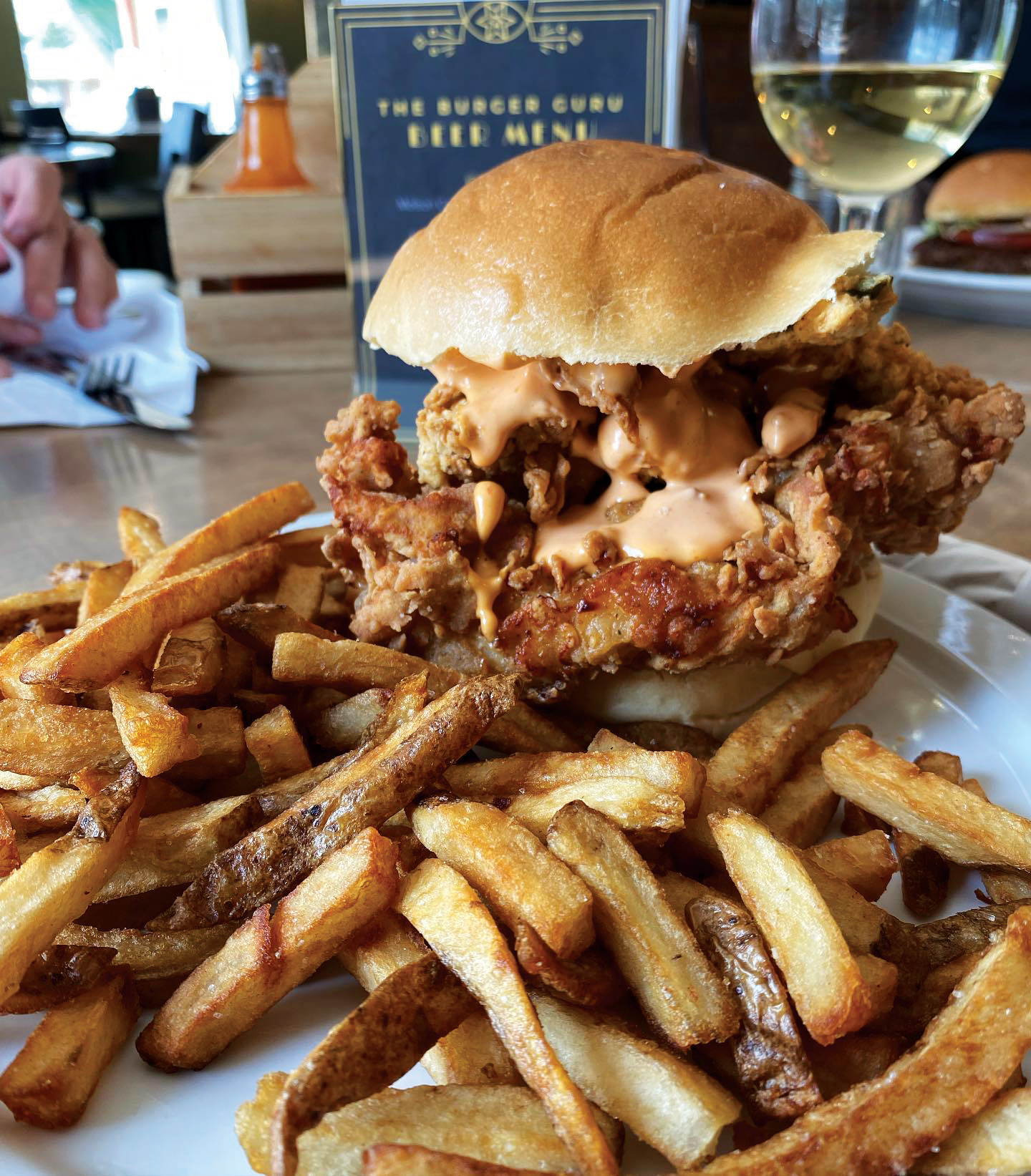 Need a satiating lunch on the way to the beach? The Burger Guru, located in the village of Flesherton, just off Highway 10, serves up all kinds of deliciousness on a bun: locally sourced smash burgers, southern fried chicken and meltingly tender pulled pork.