Live-work spaces: Inside the cozy condo and painting studio of Richard Storms

Live-work spaces: Inside the cozy condo and painting studio of Richard Storms 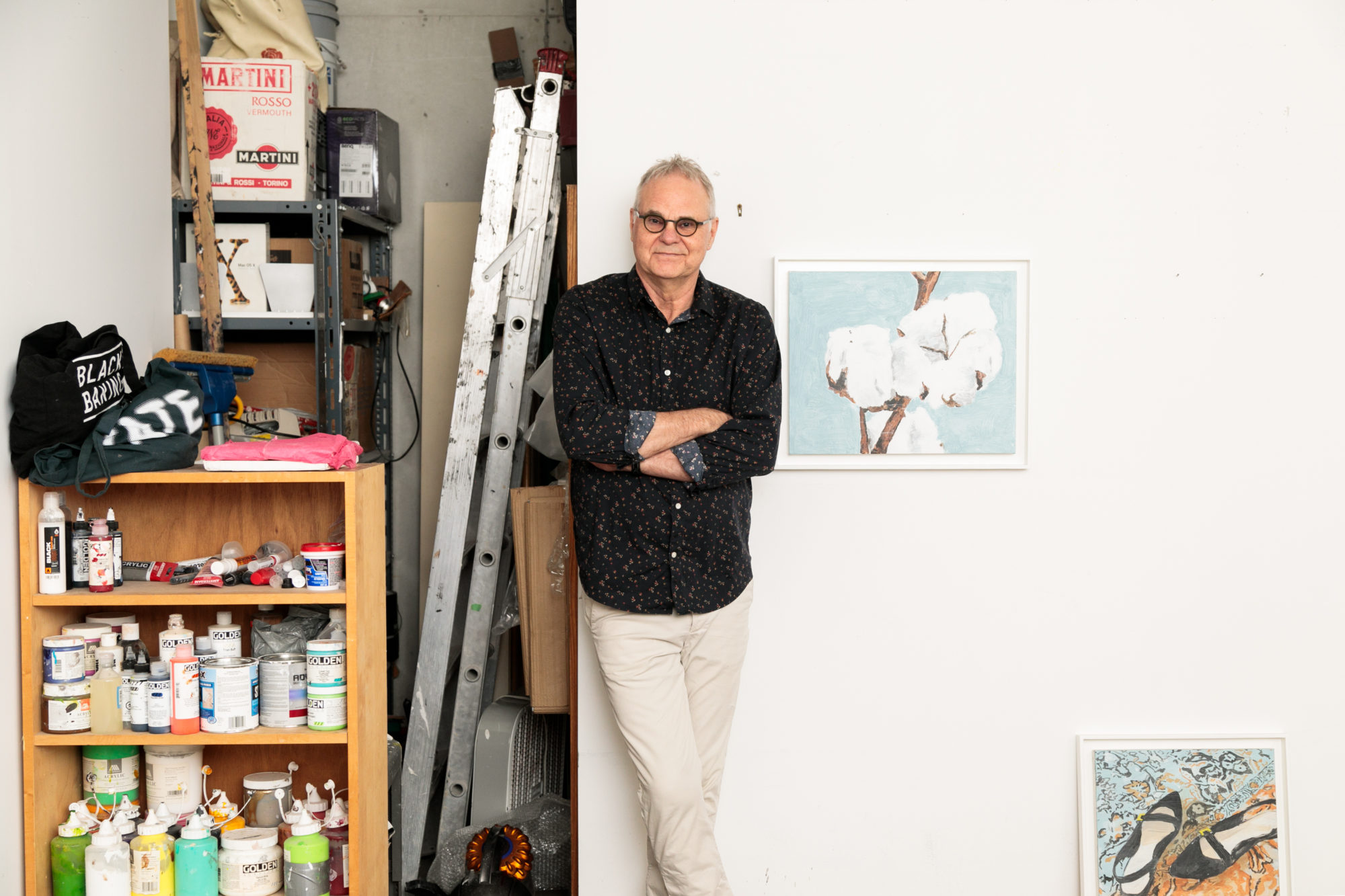 Richard moved into his 800-square-foot condo at 38 Abell Street in 2010. At the time, he was newly divorced and needed a new home—ideally one that could double as an art studio. Although he had been working as a graphic designer for CBC for 20 years (he’s now retired), he had always kept up his own painting practice. Maintaining his lifestyle meant having some dedicated space for his canvases and gear.

Richard had lived near Queen West ever since he first came to Canada from Kansas to study painting at York University 30 years ago. As he was weighing his housing options, one of his colleagues, who was living in the Artscape Triangle Lofts, suggested that Richard apply for a unit in the building. It was an affordable option: Artscape, a local not-for-profit that subsidizes housing for artists, would cover 25 per cent of his mortgage, provided he allowed them to resell the unit to another artist on similar terms when he was done with it. He jumped at the opportunity.

When he moved in, the space was empty and unfinished. He drywalled everything and built walls around what would become his studio. (He was using oil paints at the time, and didn’t want the fumes wafting into his living area.) He painted the concrete floors white to break up the grey colour scheme. Because his studio took up a large chunk of the unit’s interior square footage, there was no room for a proper bedroom, so he installed a Murphy bed in the living room.

Richard has an affinity for modern design, so he tried to make the space as sleek and stylish as possible. He designed the mid-century-inspired credenza himself, and bought a small sofa from Stylegarage. The artwork on the walls is a mix of his own pieces and those of his artist friends, whom he has traded with over the years: 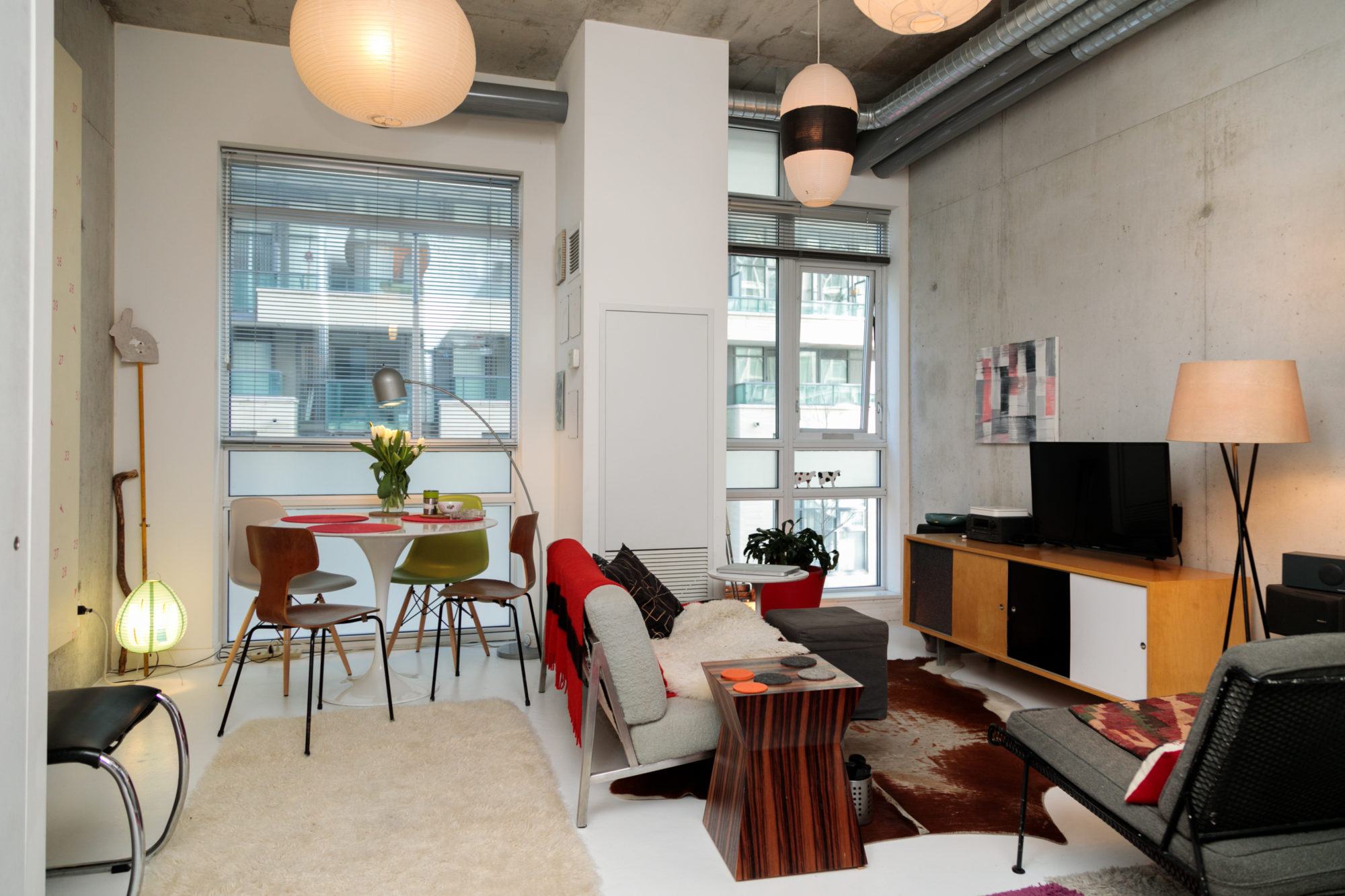 The piece hanging on this wall is called South of Dallas. Richard made it in 1993. The numbers represent distances between points on a map. The upper-right corner is where Dallas would be. The canvas was inspired by Richard’s childhood growing up in Kansas, when his family would always have visitors passing through on their way to somewhere else. “I was always familiar with maps and I was always dying to get out of there,” he says. 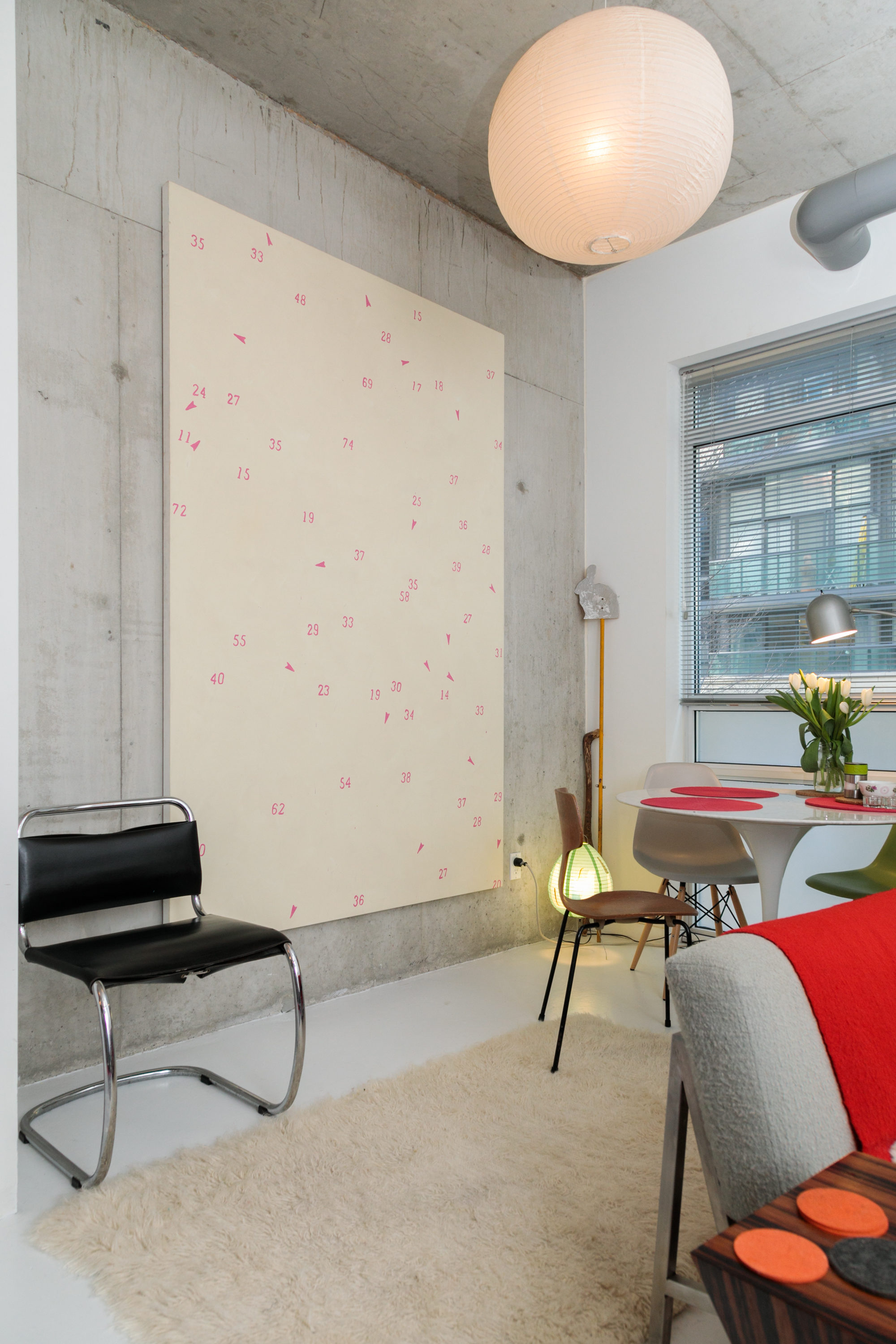 The Murphy bed is tucked into a cabinet. Richard stores linens and sweaters in the black armoire. The Canadian flag is from his citizenship ceremony. It was handed to him by Ken Dryden: 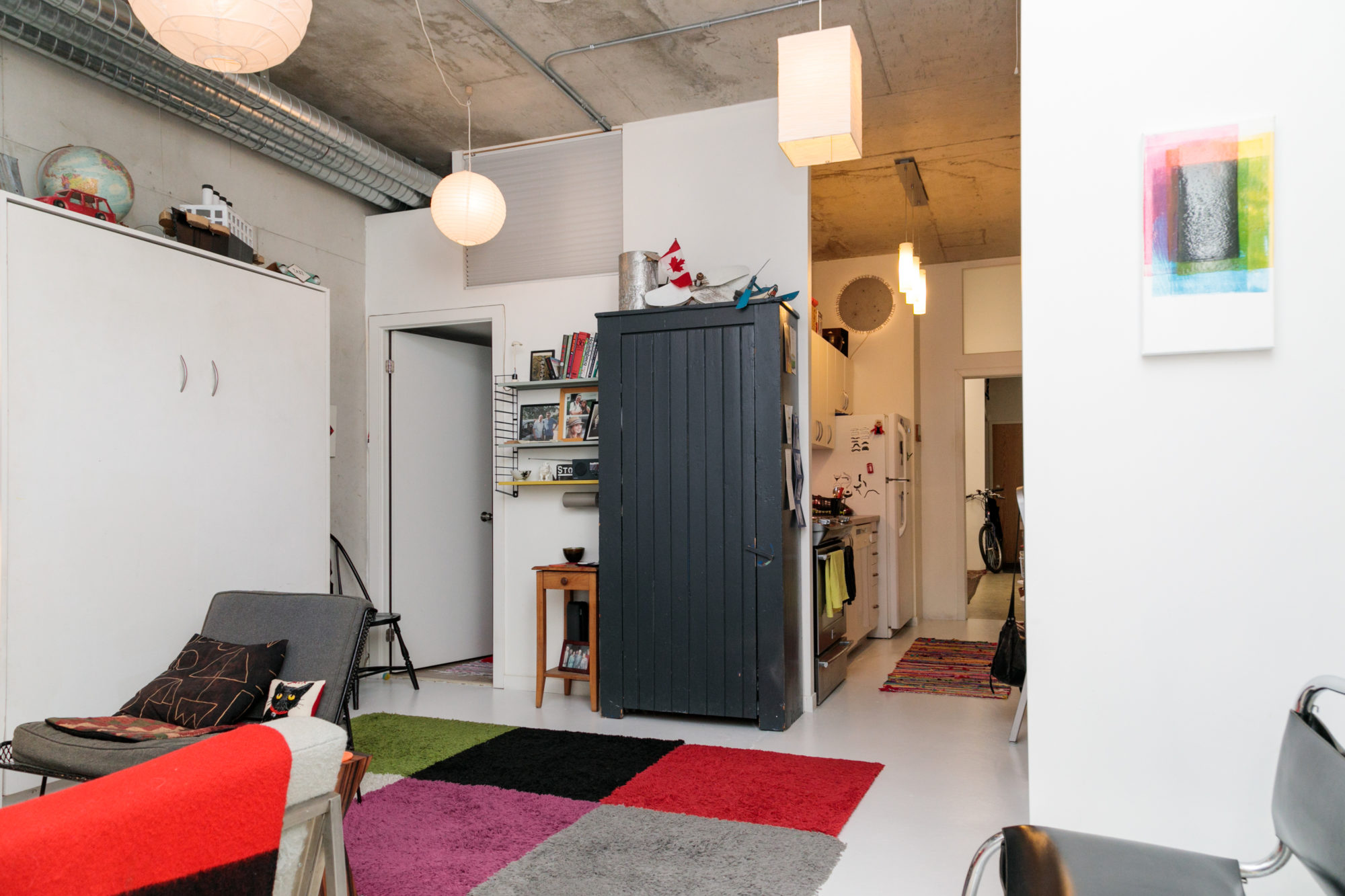 Hanging on the wall in his kitchen is a photograph of his parents in front of the house he grew up in. It was taken on Memorial Day in 1992: 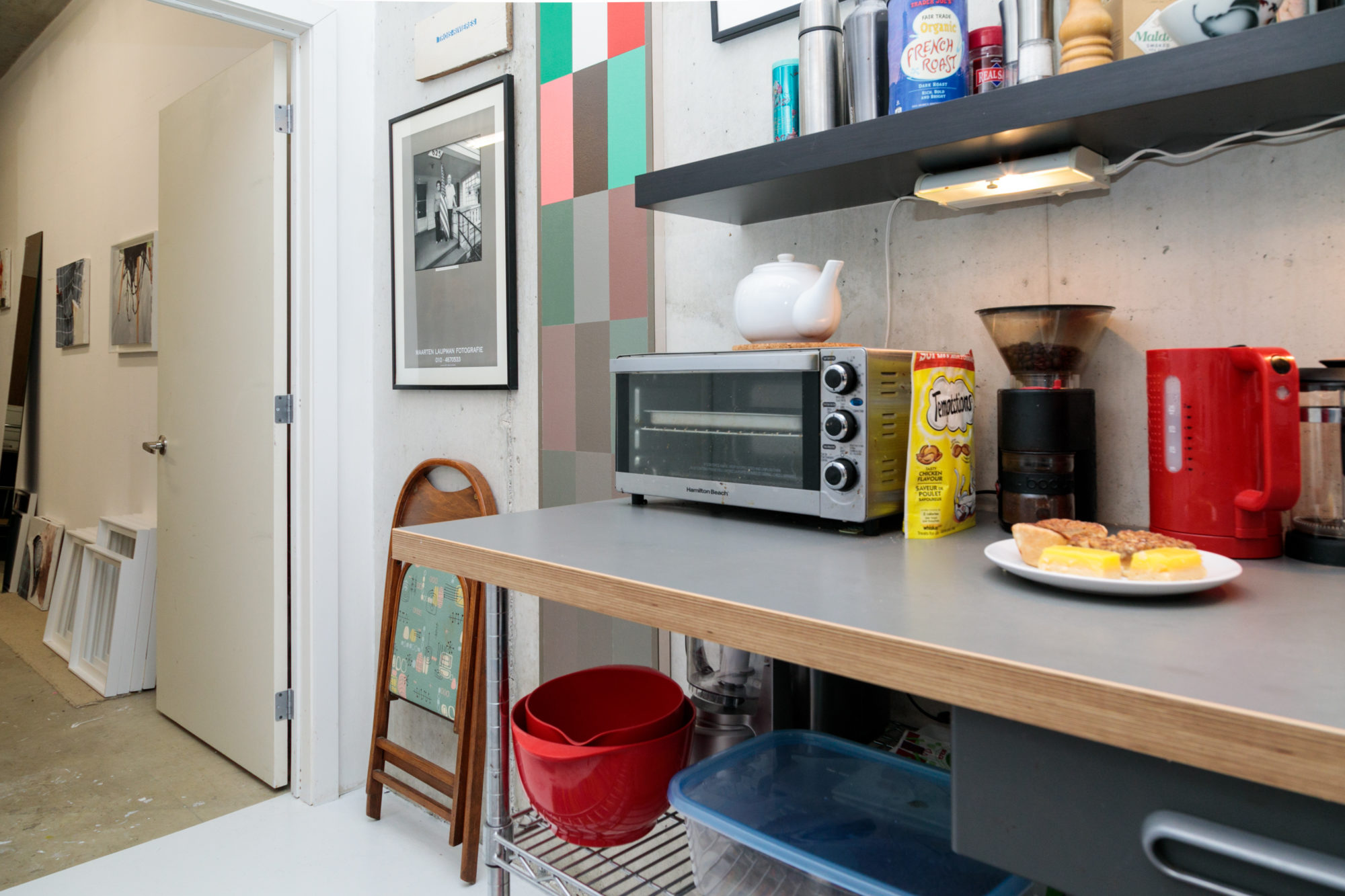 Richard has dabbled in quite few painting styles, but right now he’s focused on depicting unusual perspectives of everyday objects. “I like working abstractly, but there’s a point when you start wanting to make things that look like things again,” he says. On the wall is a painting of a snowy windshield wiper. “It’s one of those funny things that’s so familiar, yet you never notice it,” he says: 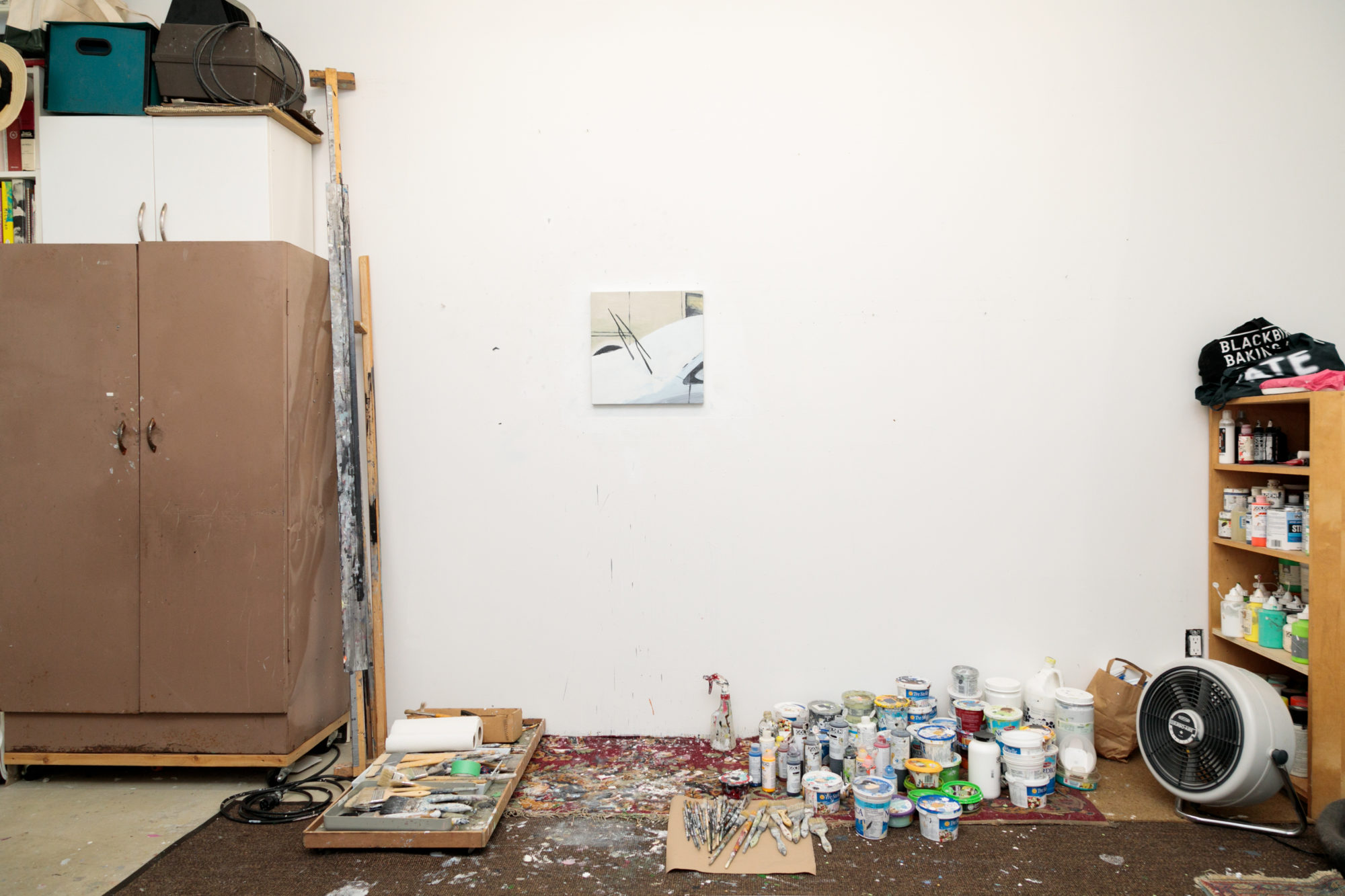 Richard has two cats. This one is named Gus: 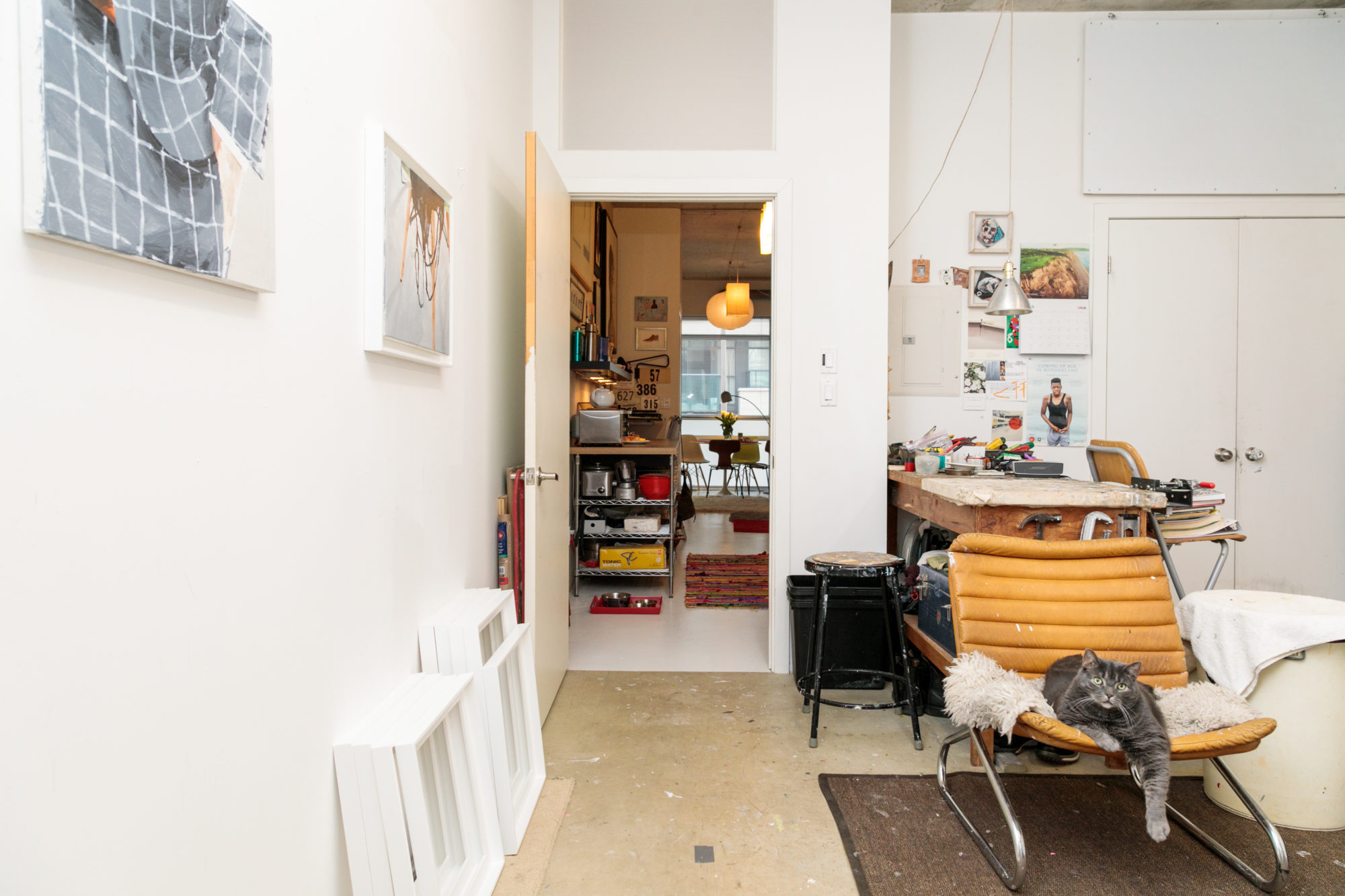