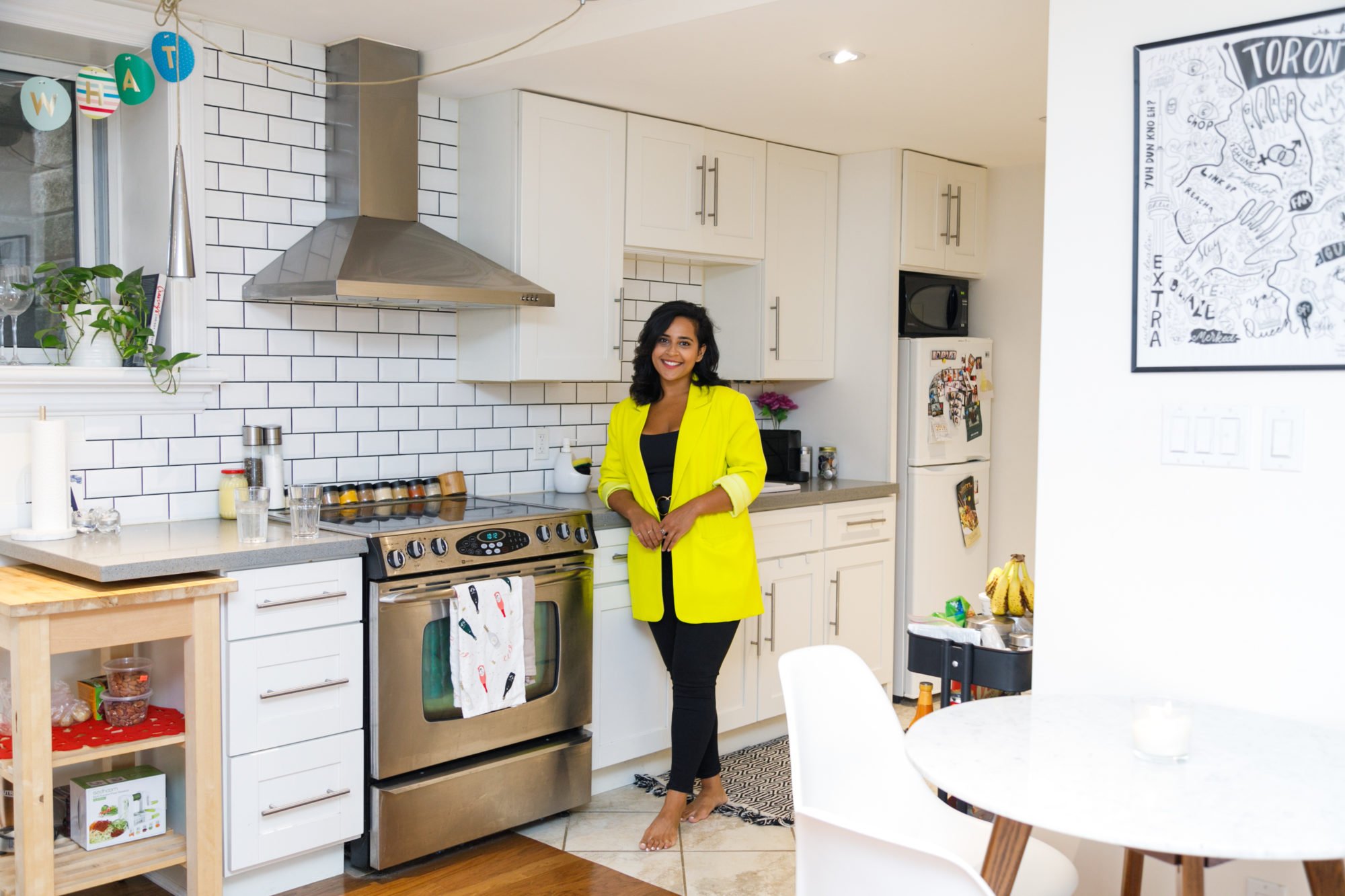 Ashna moved to Toronto in the summer of 2017, after graduating from the University of Waterloo. She was living in a high-rise condo in Fort York with a roommate for a year, when one of her co-workers got transferred to BrainStation’s Vancouver office. She jumped at the opportunity to scoop up his basement studio apartment in Little Italy. “I didn’t think I’d be able to live alone so quickly after moving to Toronto,” she says. “I thought it would be a luxury that I’d have to wait for.” It was teeny but affordable. As soon as she saw the space, she imagined how to customize it to suit her style and needs. It was important for her to have distinct spaces for sleeping, living and eating. “I didn’t want a bed that would double as a couch,” she says.

The landlord let Ashna access the apartment early to take photos and measurements. She ended up strategically placing furniture and carpets to create the illusion of separate rooms, and tried to use pieces that could double as storage units. Now, there’s a distinct feel of a kitchen, eating area, living room and bedroom. When she has friends over, it doesn’t seem like you’re walking right into her bedroom. And she doesn’t mind being in the basement, because there are a couple of nice-sized windows that let in lots of light (she even asked her co-worker to take a video of the morning light before she agreed to move in). Here’s a look inside.

The basement opens into a small entryway and her kitchen. Ashna was impressed with the counter space. “It’s a lot, even for a regular-sized condo,” she says. 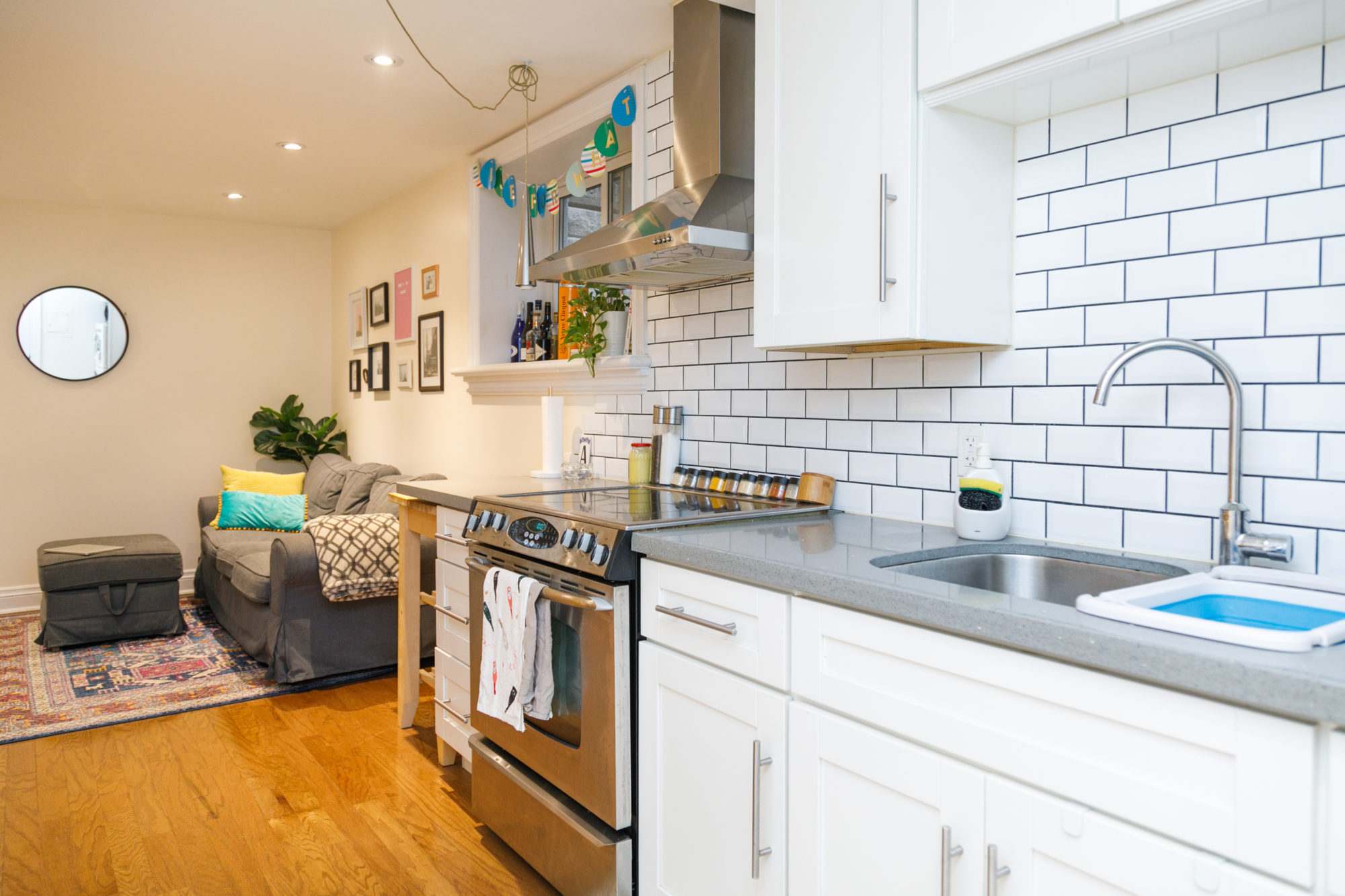 There’s room for a small eating nook. She’d been eyeing that marble table for a while on Article, an online furniture store: 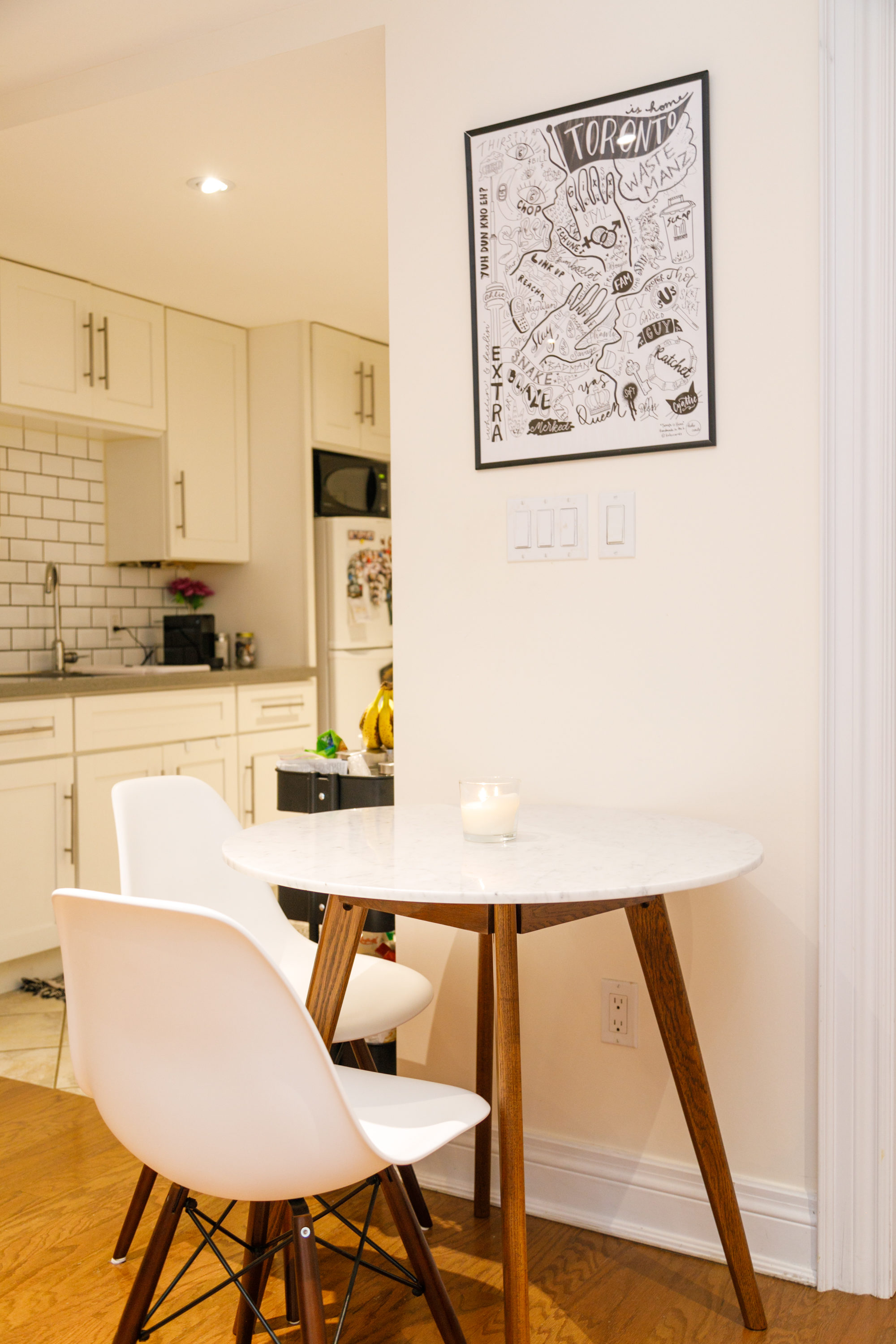 She created a mobile pantry to store a lot of her food items: 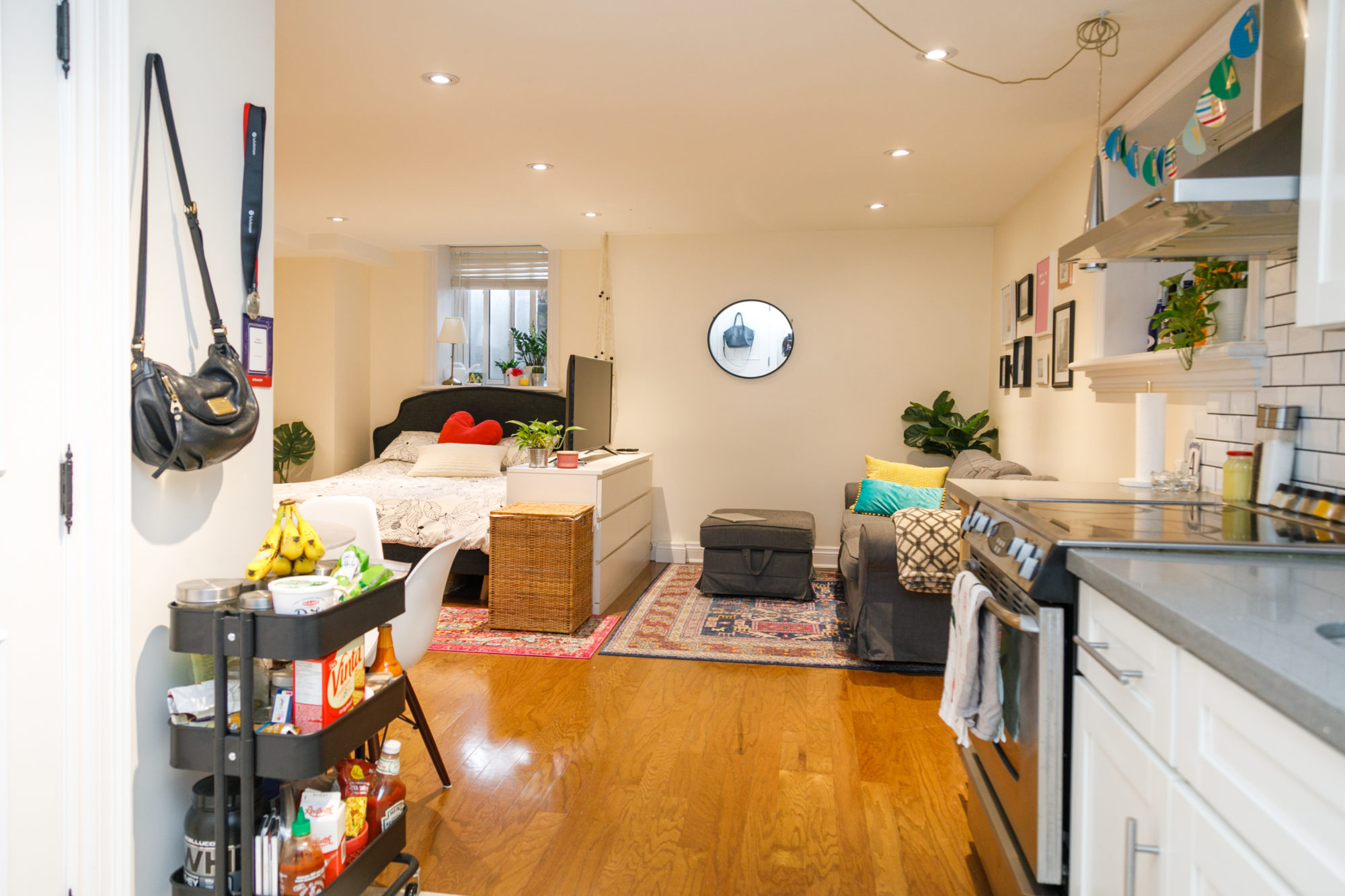 By placing her TV on top of a dresser, Ashna built a makeshift divider between her bedroom and living area. She also used rugs to help differentiate the spaces. “I wanted to put them together with a mindset of how I’d decorate my space if it wasn’t a studio,” she says. 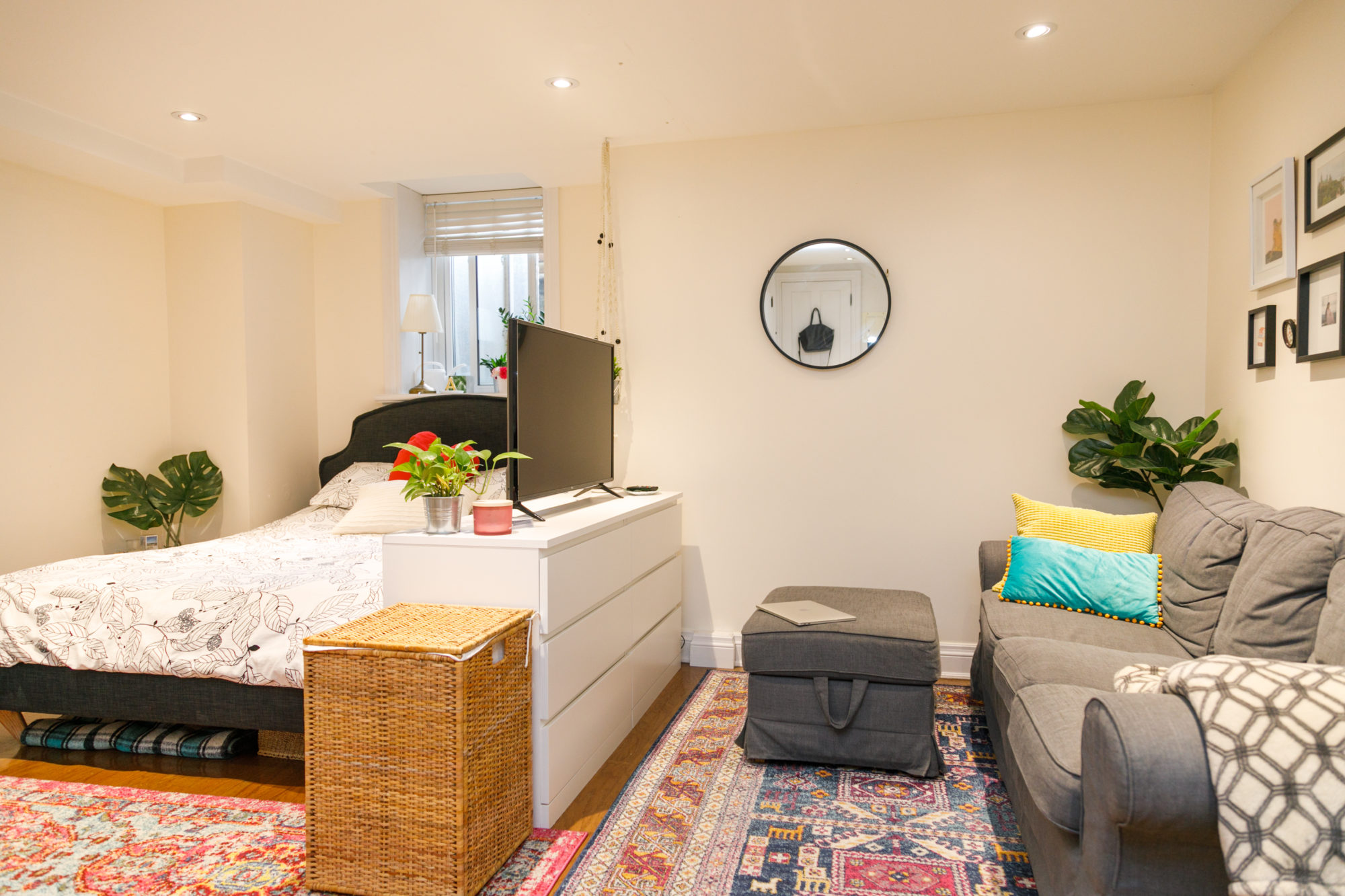 Above the sofa, she made a collage wall. The frame on the lower right is reserved for the letter she’ll get once she pays off her student loans: 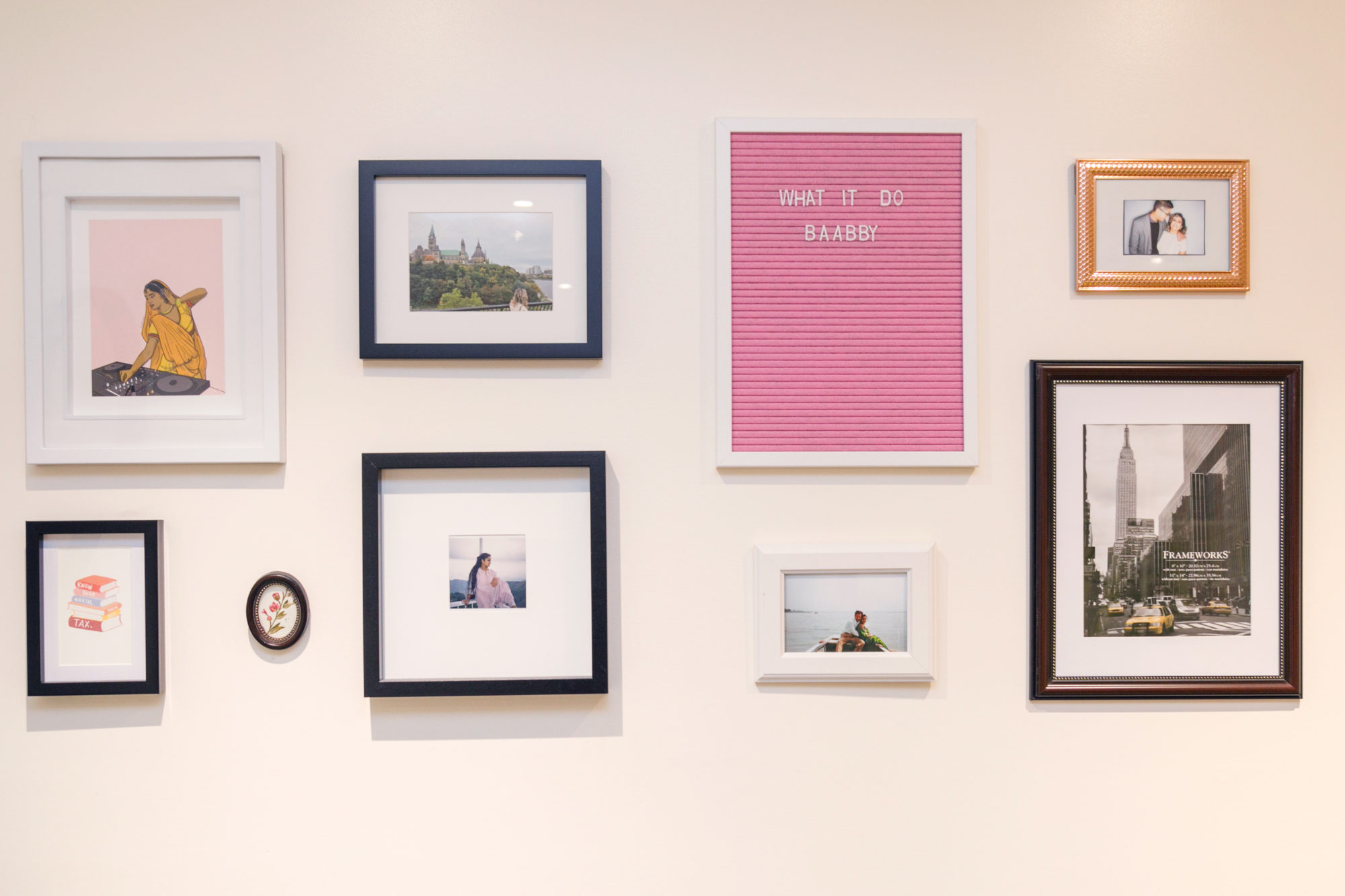 Ashna splurged on the bike, and didn’t want to leave it outside, so she invested in a wall rack. “It’s surprisingly unobtrusive,” she says. 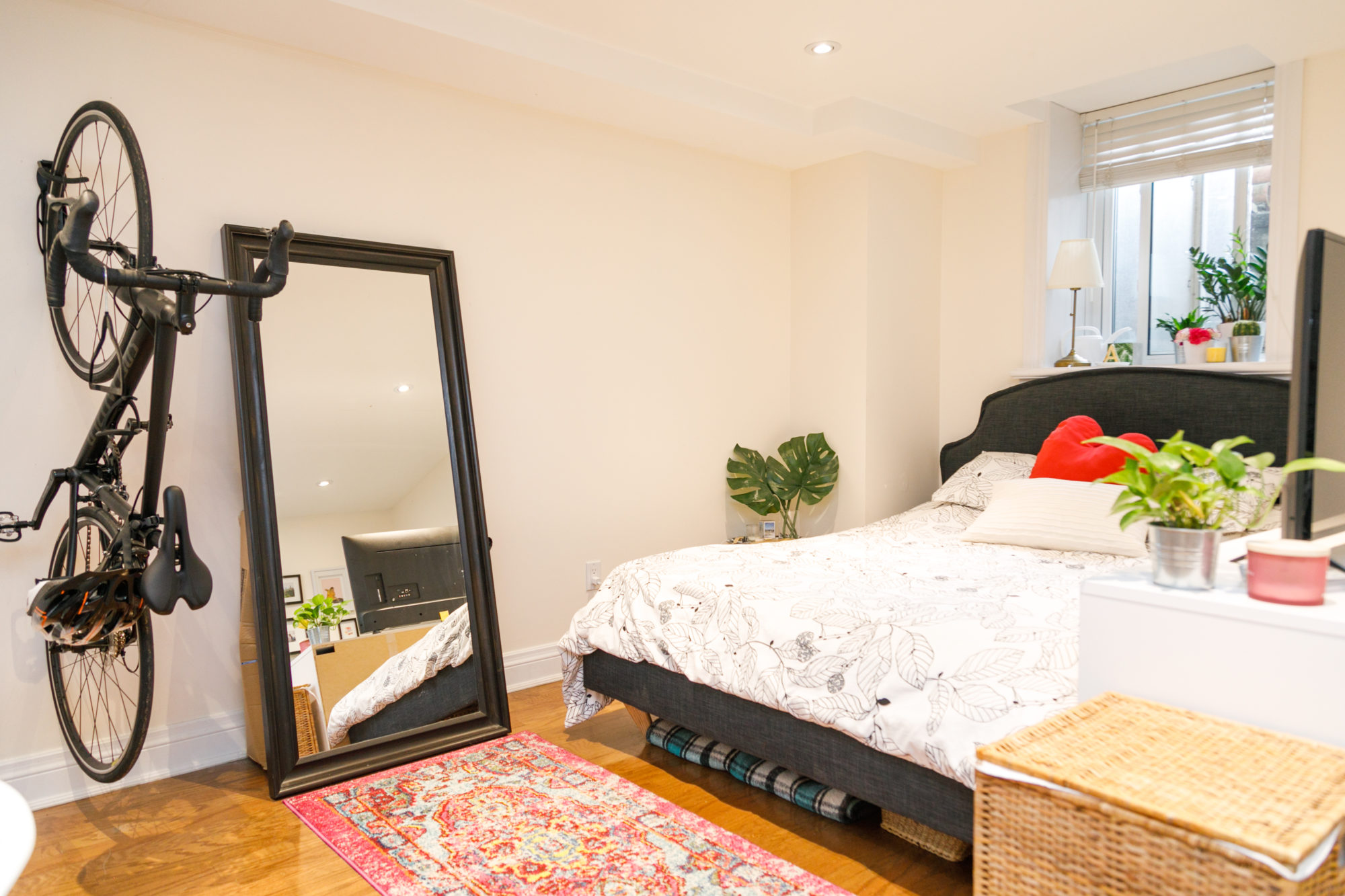