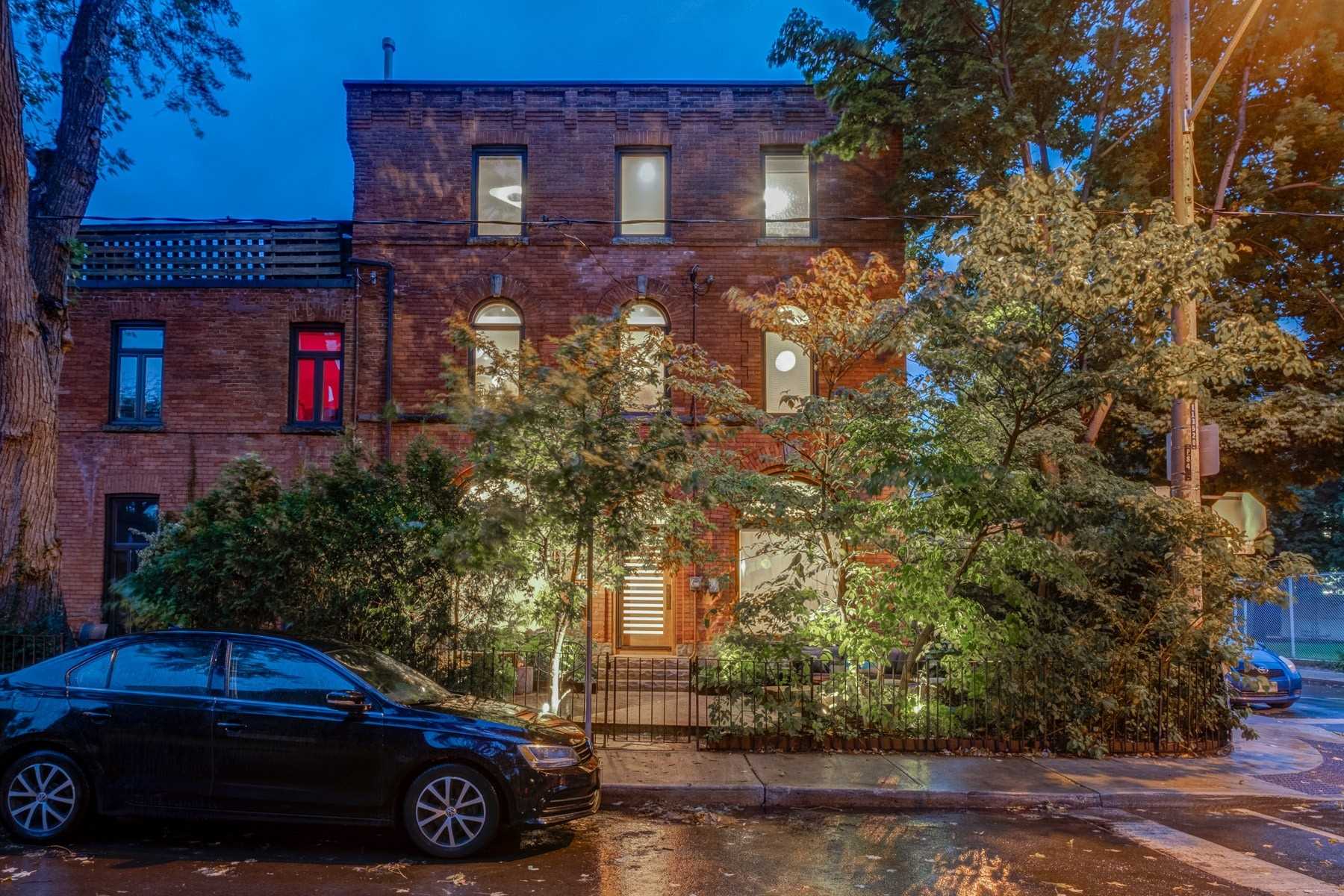 A two-bed, two-bath townhouse in a former dairy built in 1875.

In the 1980s, this building was vertically divided into three townhouse-style units. This three-storey corner unit underwent a major renovation by Plant Architecture and Landscape in 2019, during which the floors, staircases, windows and landscaping were redone.

The neighbourhood is close to bakeries, grocery stores and restaurants in East Chinatown. The street is tree-lined and relatively quiet, with lots of Victorian homes, families and young professionals nearby. The same owners have lived in this property for the past 18 years.

To the left of the front door, there’s an open kitchen area with cabinets made of cherrywood. There’s also a Bertazzoni five-burner gas range, a Bosch fridge and a Miele dishwasher. The arched window shape is from the dairy’s original design, but the windows themselves have been replaced and upgraded over the years. 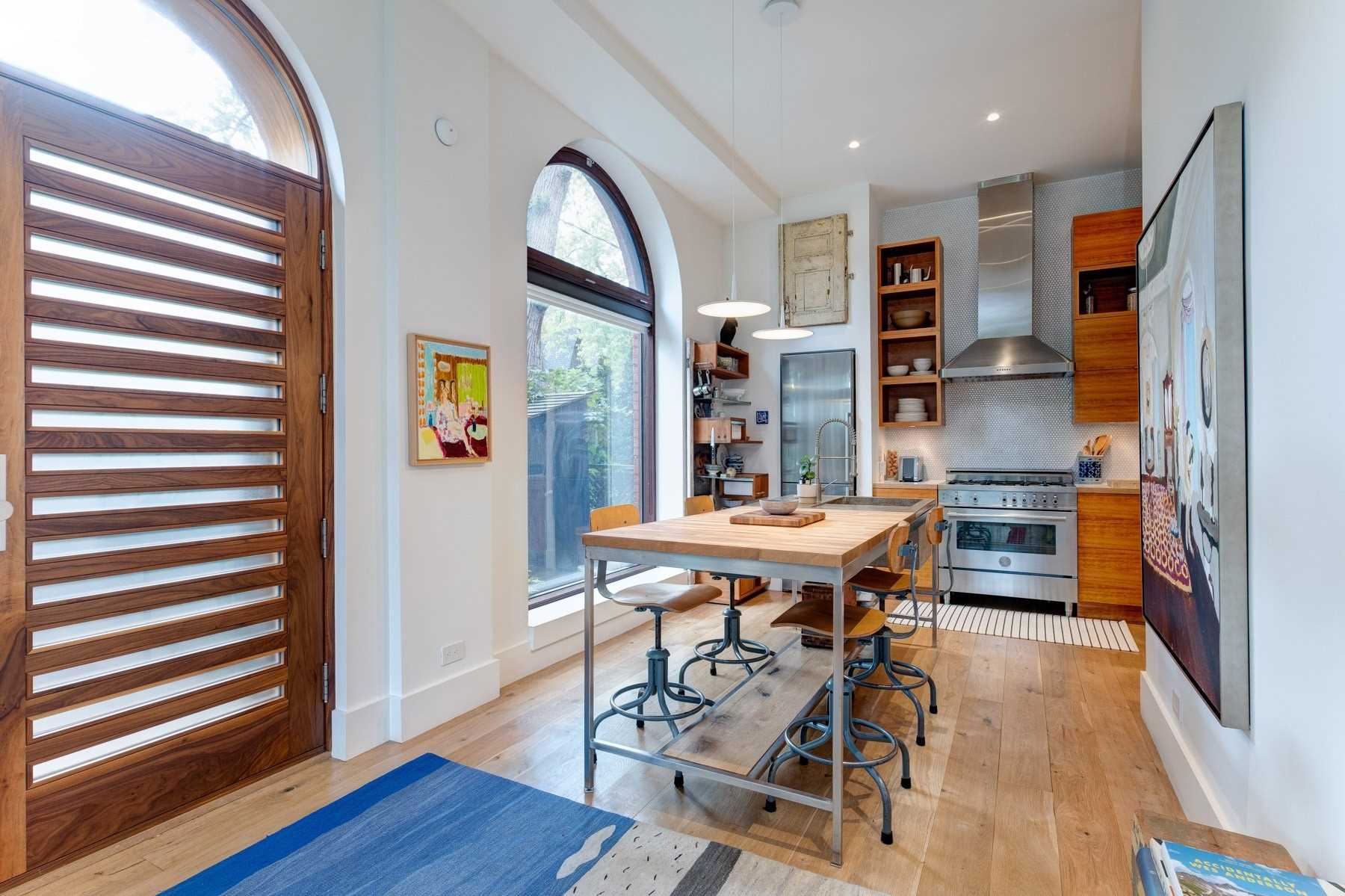 Here’s another view of the kitchen with storage nooks in the far wall. The vintage door above the fridge nook conceals another storage space. There’s a poured concrete sink by Montreal-based Vincent Boyer Design and Architecture built into the kitchen island. 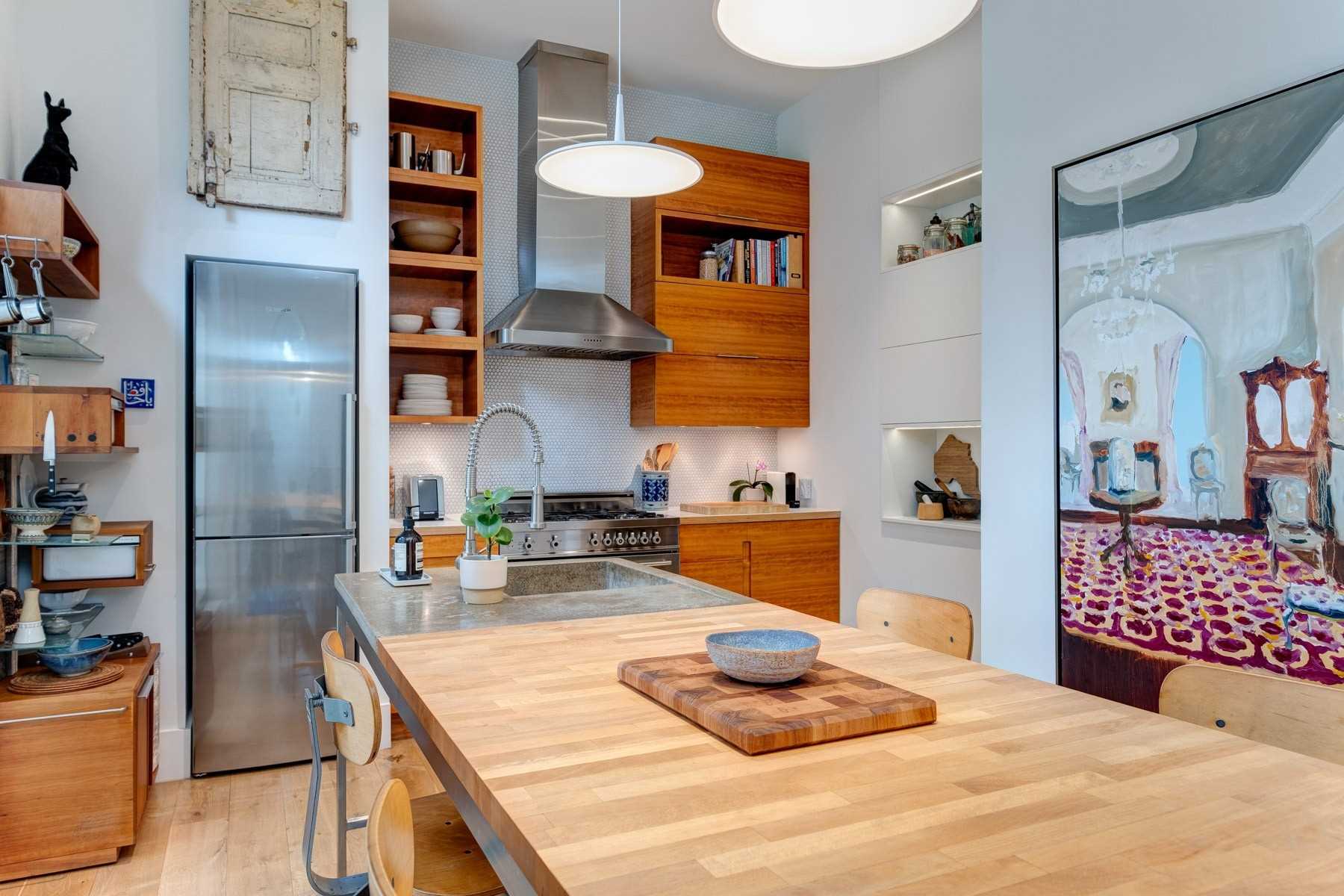 To the right of the main entrance is the dining area. The light fixture above the table is designed by Rich Brilliant Willing. (It comes with the home, as do all the other light fixtures.) Another storage spot, next to the staircase, is covered by another vintage door. The first and second floors of the home have white oak flooring. 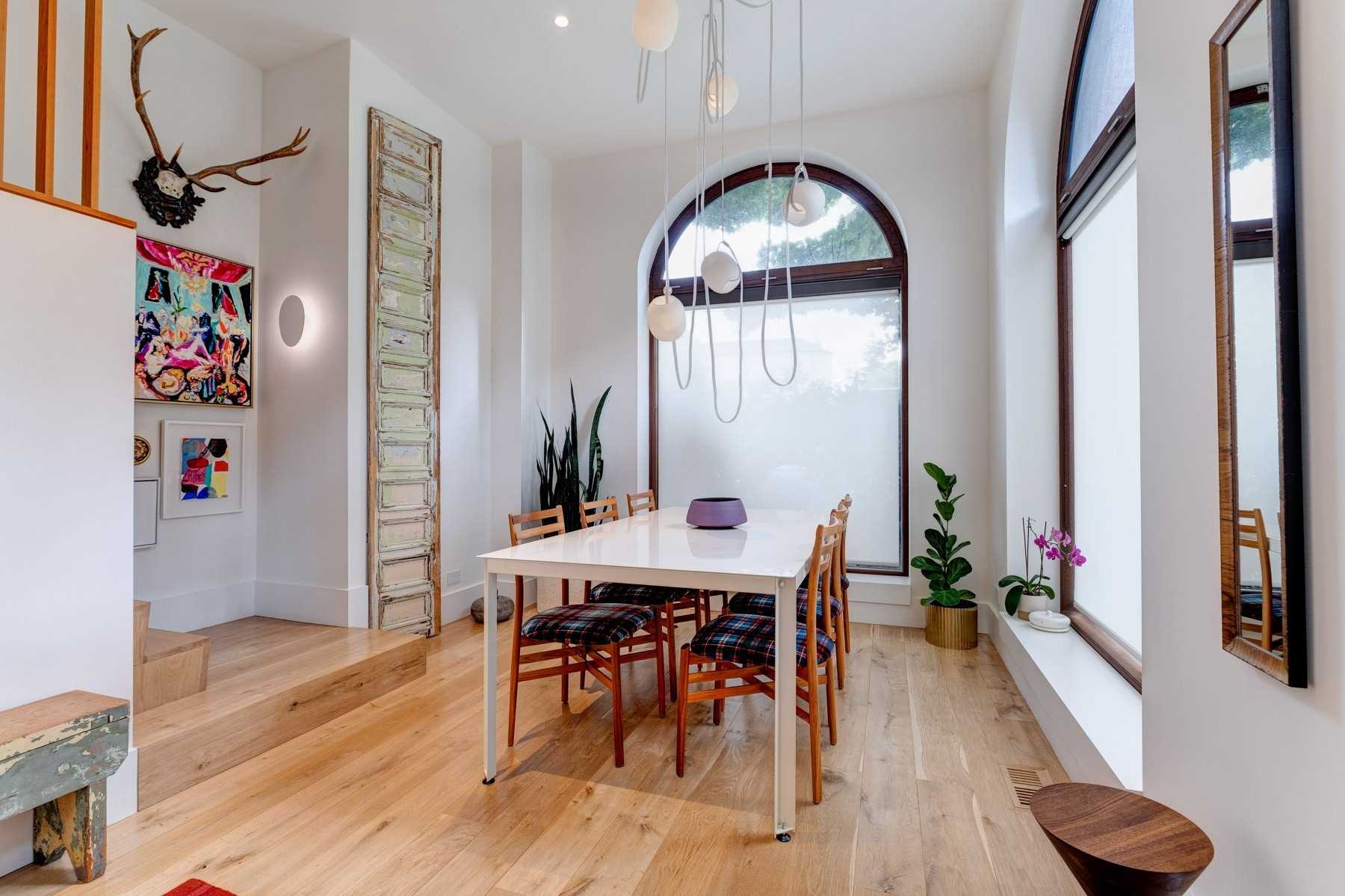 The second floor opens up to this living room area with a built-in media centre. The pendant globe lights are designed by Foscarini, and the cherrywood wall feature conceals a bulkhead with built-in pot lights. 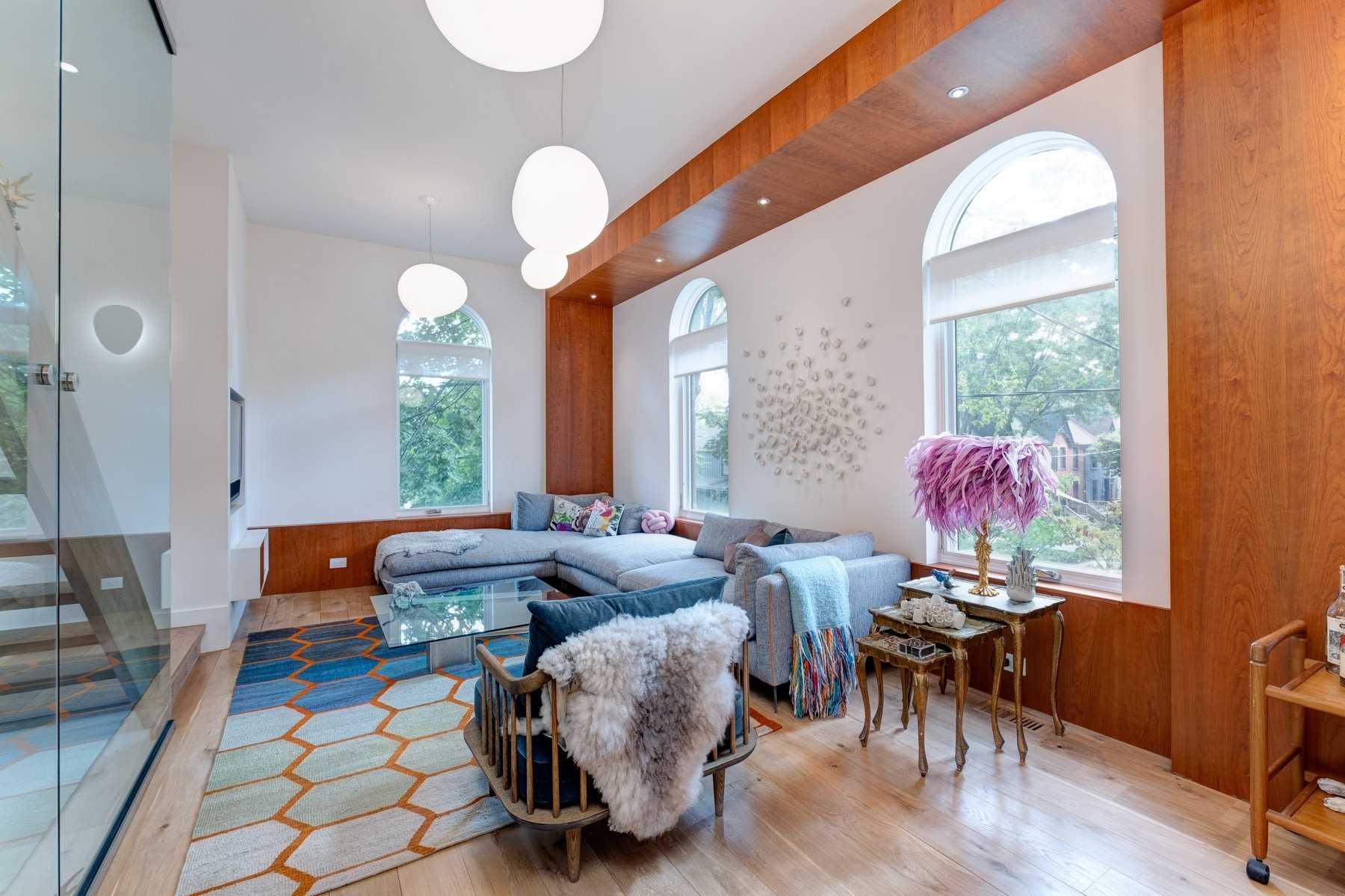 Opposite the living room is a den with built-in walnut shelving and an impressive gallery wall. (Unfortunately, none of the art pieces come with the home.) The Foscarini light fixtures continue into the den, along with the cherry wall feature. 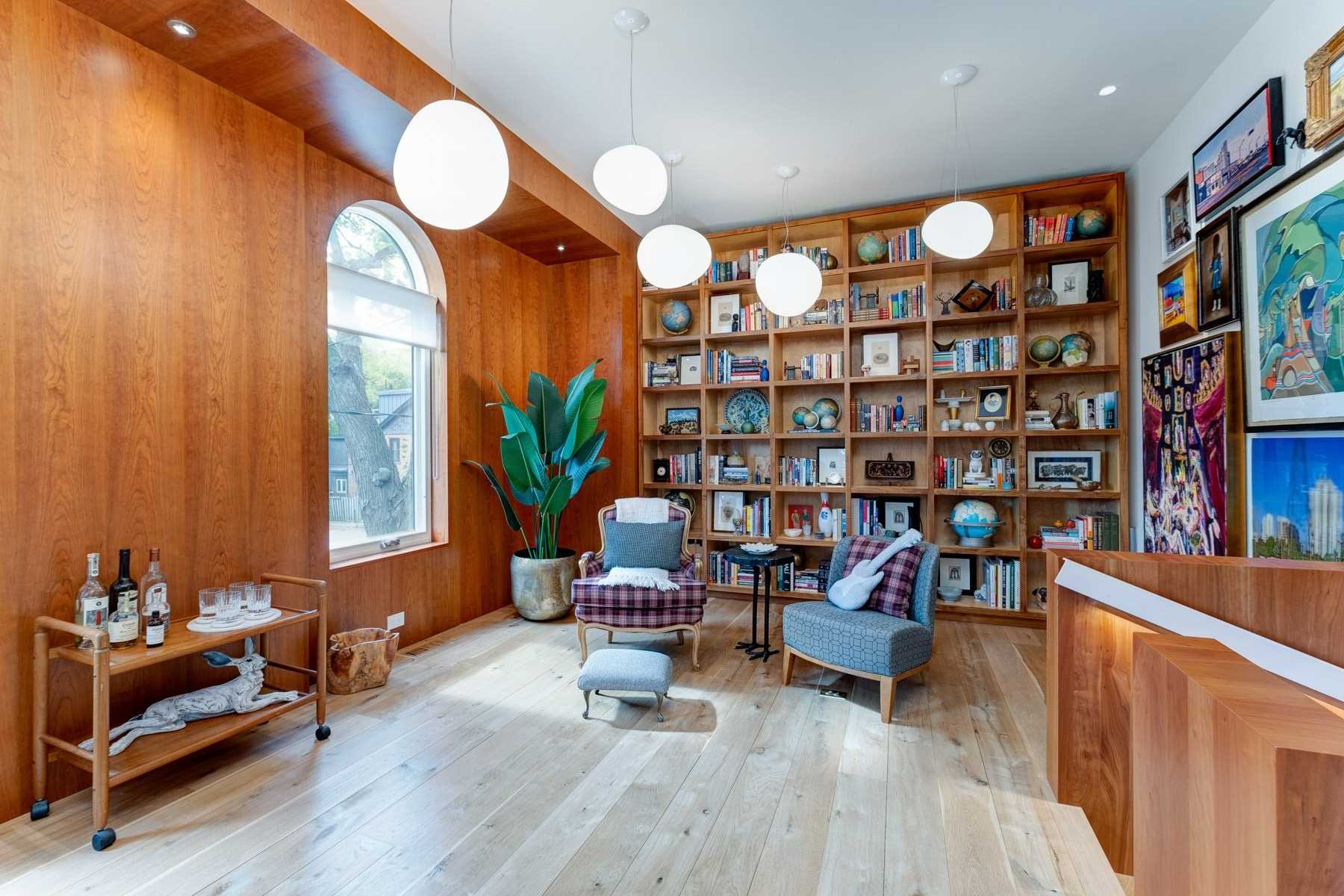 Before the 2019 renovation, the staircase was enclosed. Renovating it with glass panels added visual depth to the home (as well as a better way to showcase art). The staircase is made of oak and has an illuminated wood-and-steel handrail. 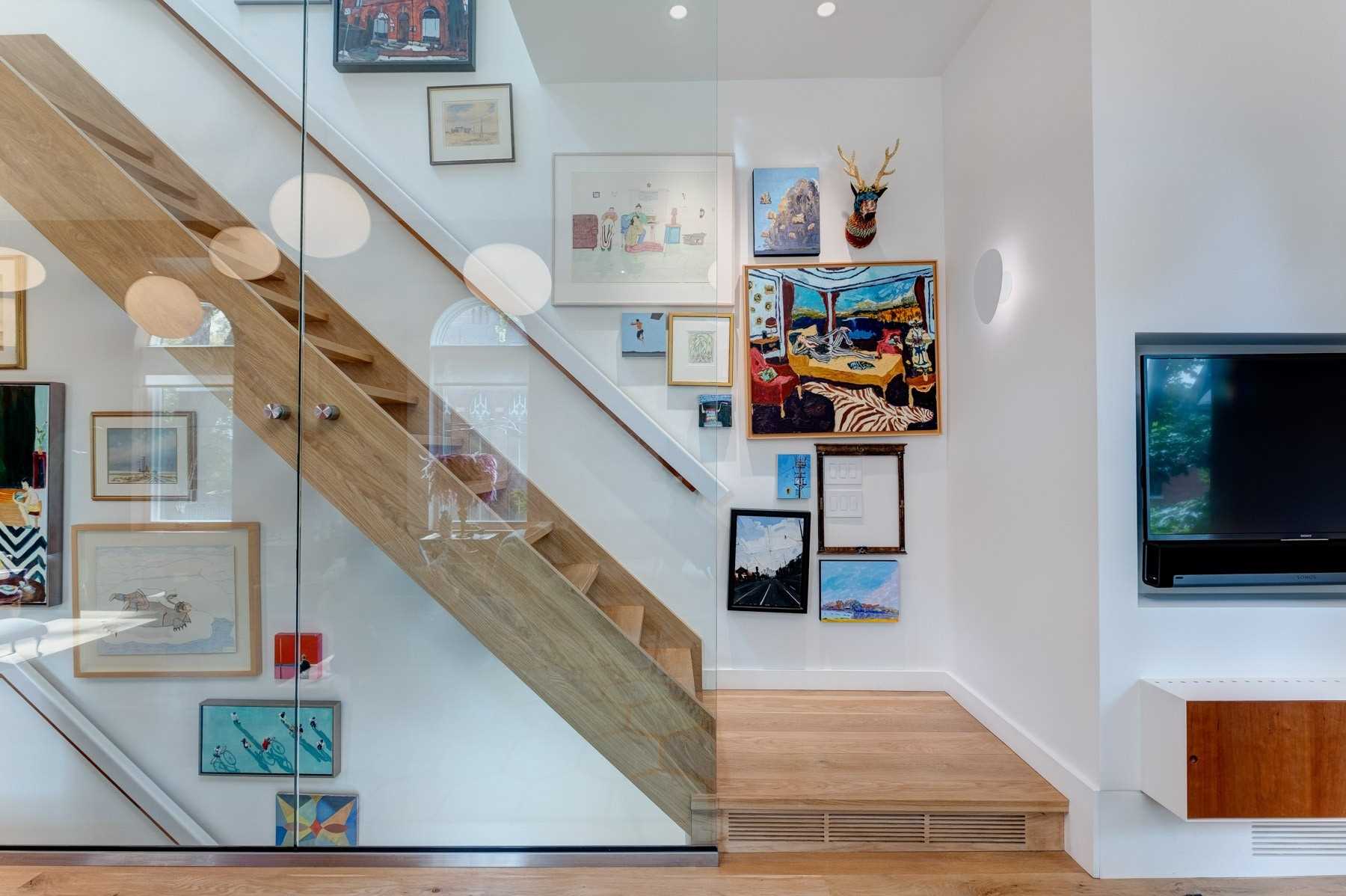 Here’s a view over the stairwell from the third floor, with a peek into the primary bedroom. There’s a skylight above the stairwell to let in more natural light. 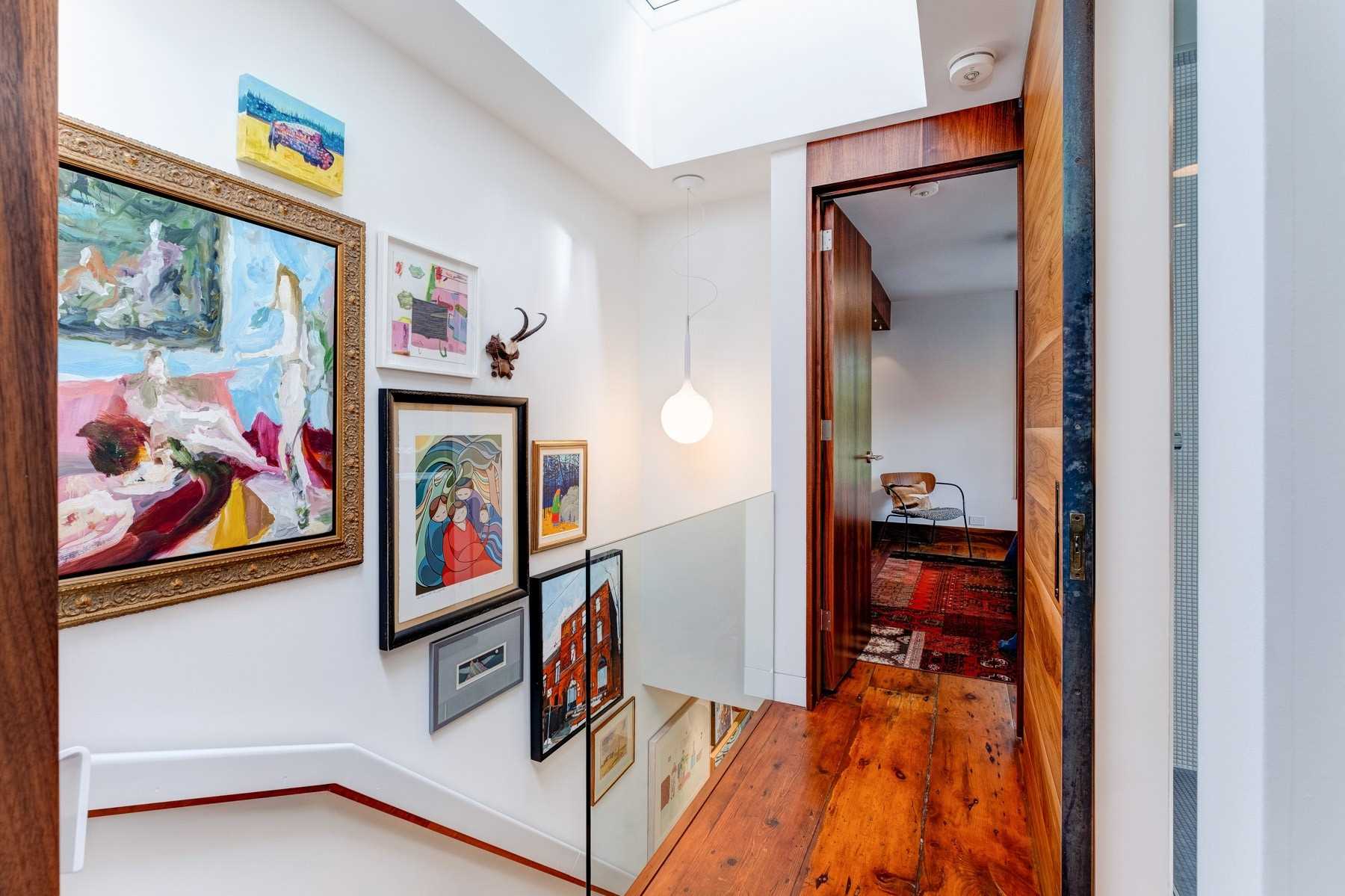 The primary bedroom has custom walnut closets and a ceiling light from Studio Odile Decq. The flooring on the upper floor is 120-year-old reclaimed wide-plank pine. There are also walnut cabinets with built-in lighting and walnut window frames. 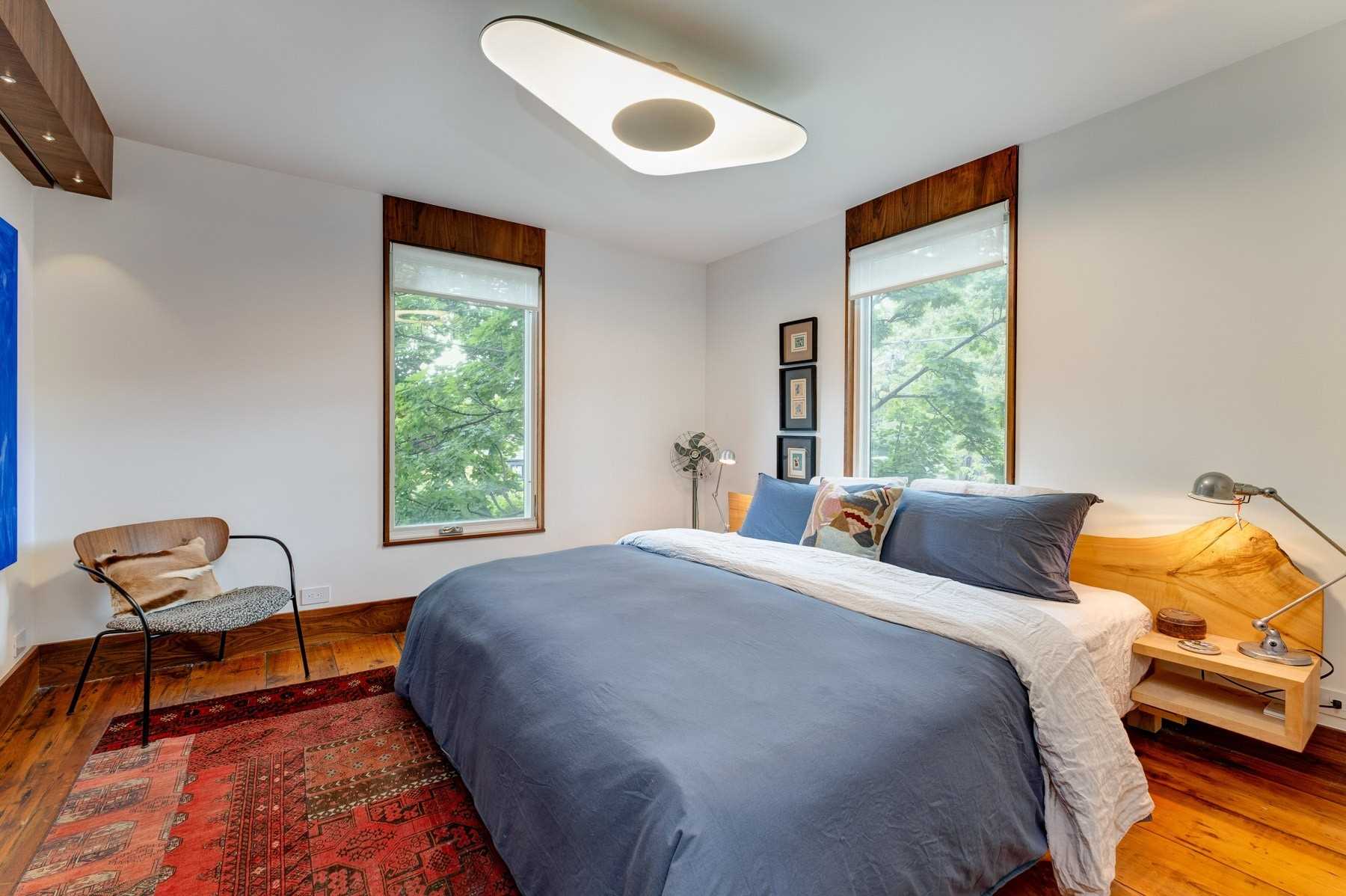 The second bedroom has another Studio Odile Decq light as well as a skylight. It’s currently set up as an office, but the white shelving has a Murphy bed behind it. The bookshelf actually swings out and tucks into the wall, so items on the shelf don’t have to be removed in order to use the bed. 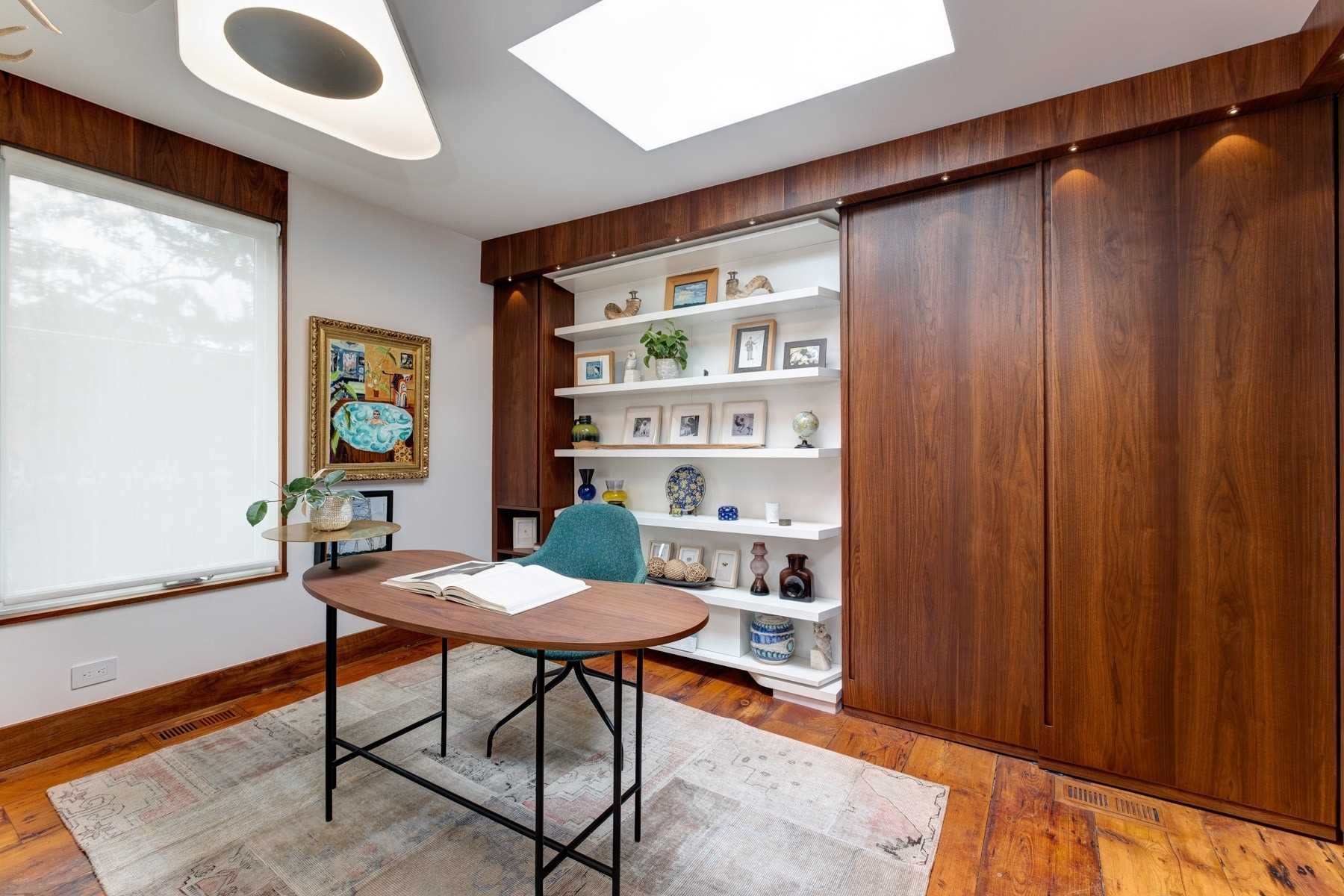 There’s a full bathroom on the upper floor with a wood wall feature and a soaker tub. The bathroom mirror conceals a built-in medicine cabinet with more storage. 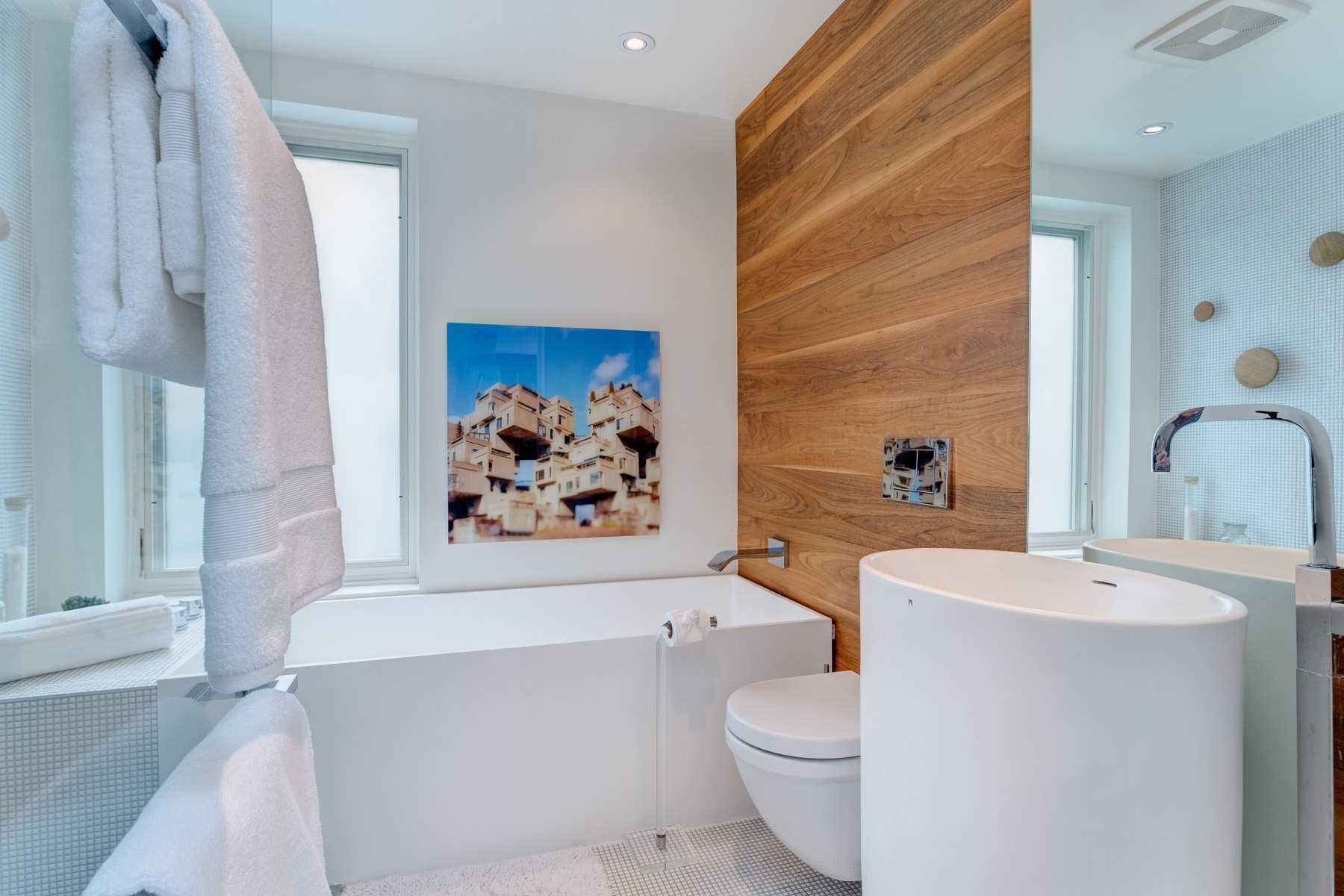 Here’s another view of the bathroom. It has a walk-in shower area with a storage niche and a rain shower head. The shower base is made of concrete that was hand-poured in Montreal by Vincent Boyer (the same designer who made the kitchen sink). 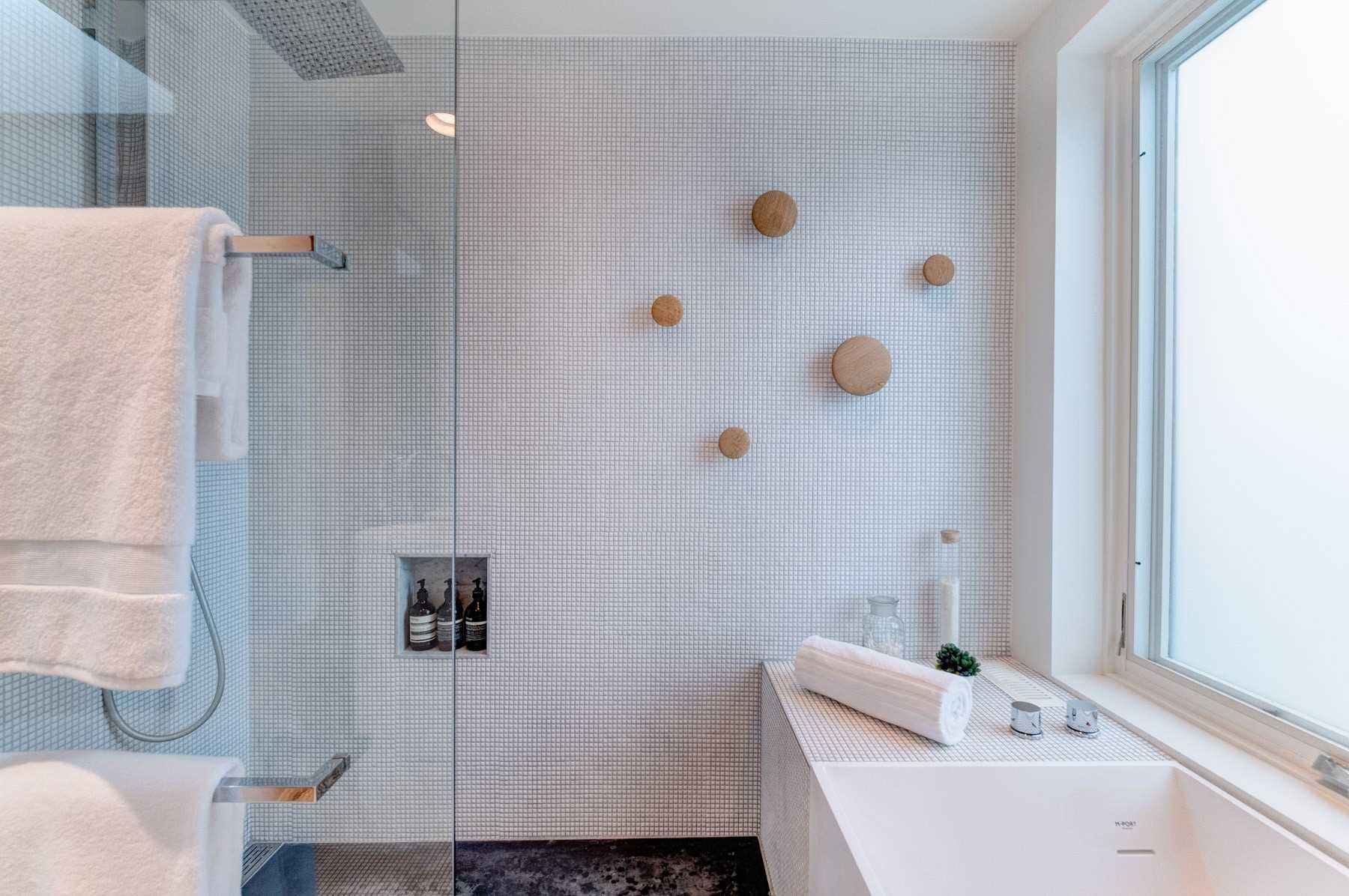 The stairwell to the basement is located next to the storage niches in the kitchen. Behind the gym area, there’s a laundry and furnace room, a powder room and a storage room. 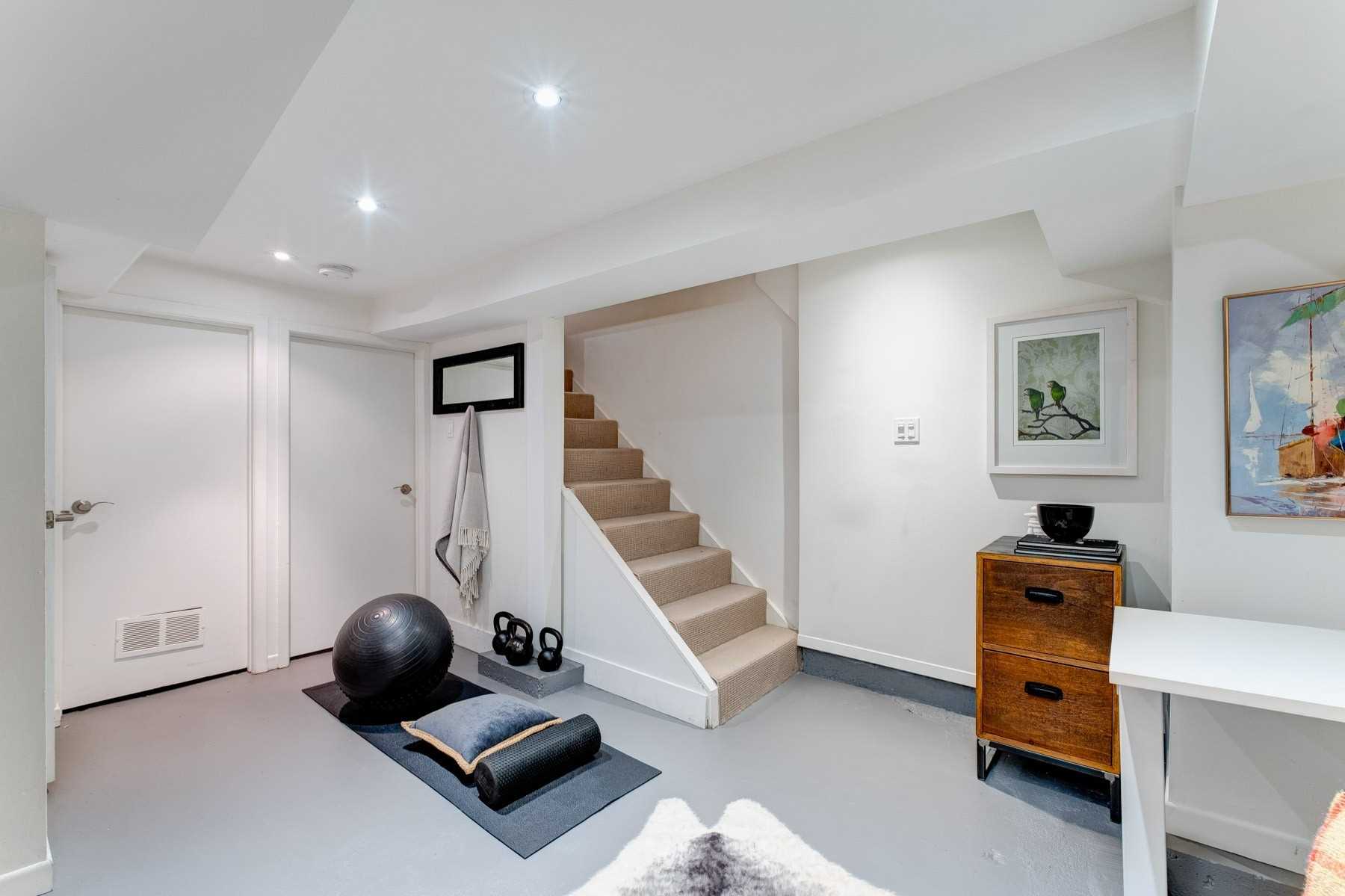 There’s also an office area set up in the basement. Prior to Covid, this space was used as a guest bedroom. 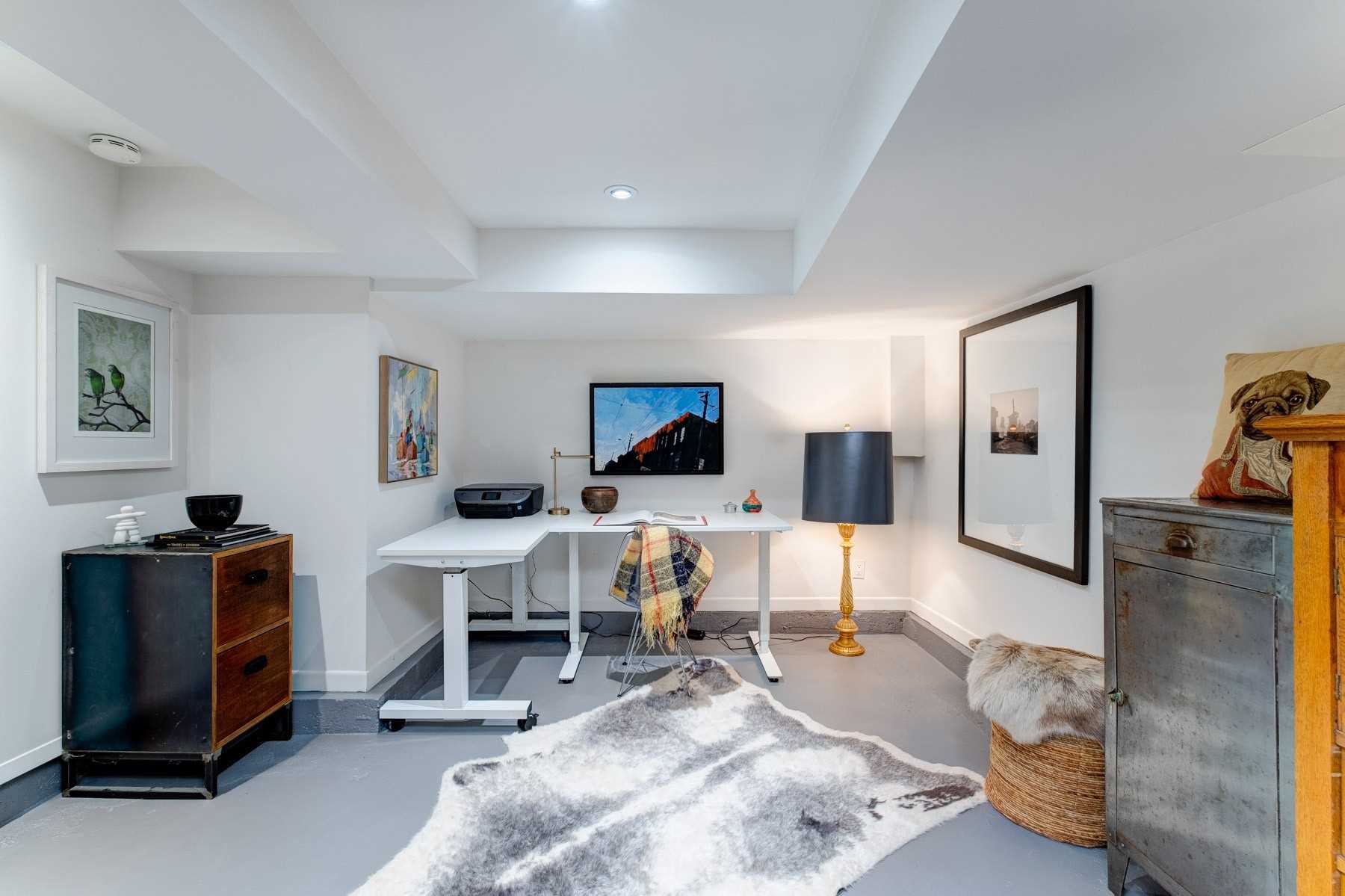 The front of the home has a lounge area with a bench made from reclaimed wood beams. There’s a soaker sprinkler system installed in the garden along with lighting on a timer. 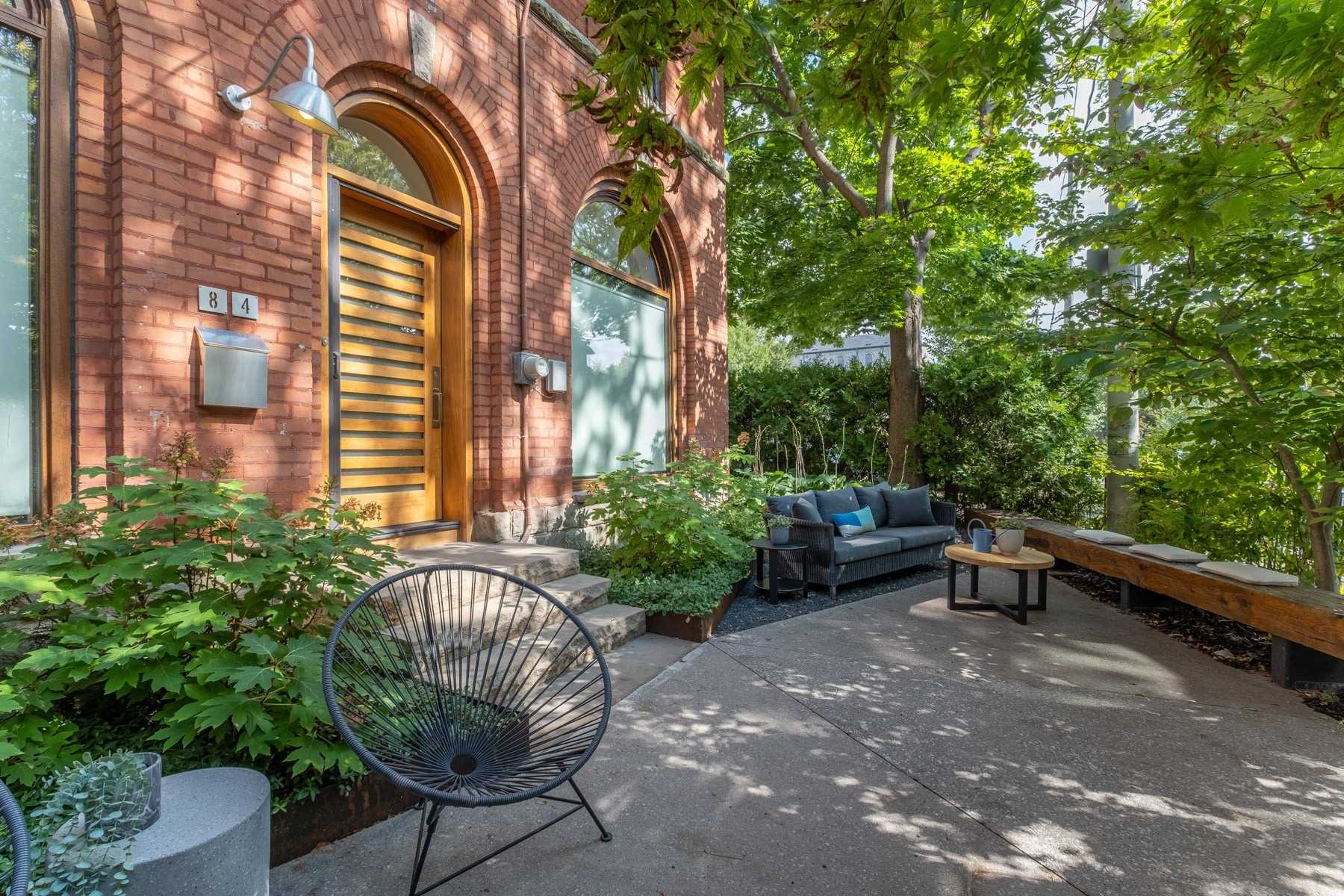 Here’s another view of the front of the home. There’s a table to the left (also made of reclaimed wood beams) for outdoor cooking prep and a storage shed for bikes. The planters have Corten steel borders. 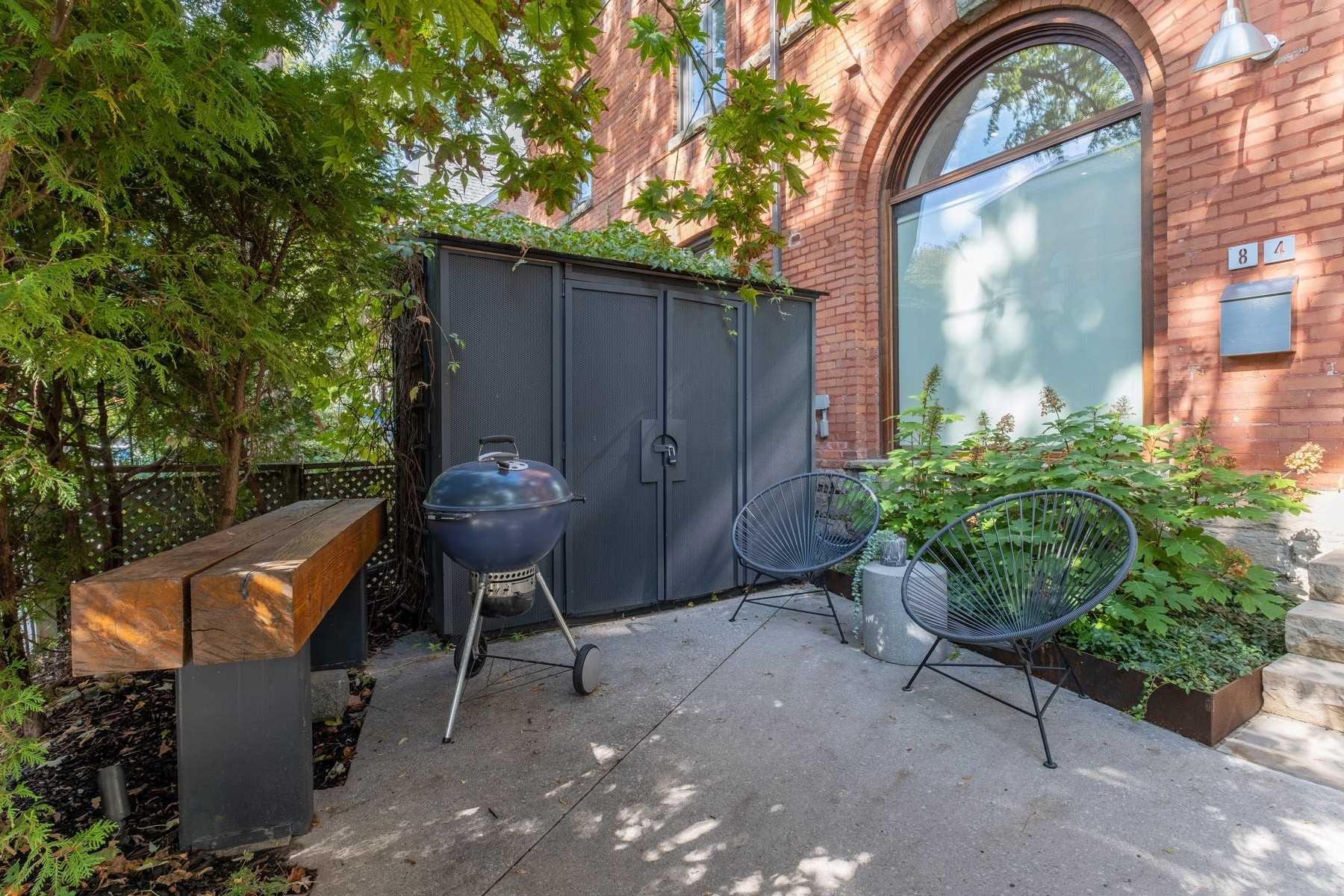