Before and After: How this classic Beaches semi transformed into a $1.4-million property with Japandi flair

Before and After: How this classic Beaches semi transformed into a $1.4-million property with Japandi flair 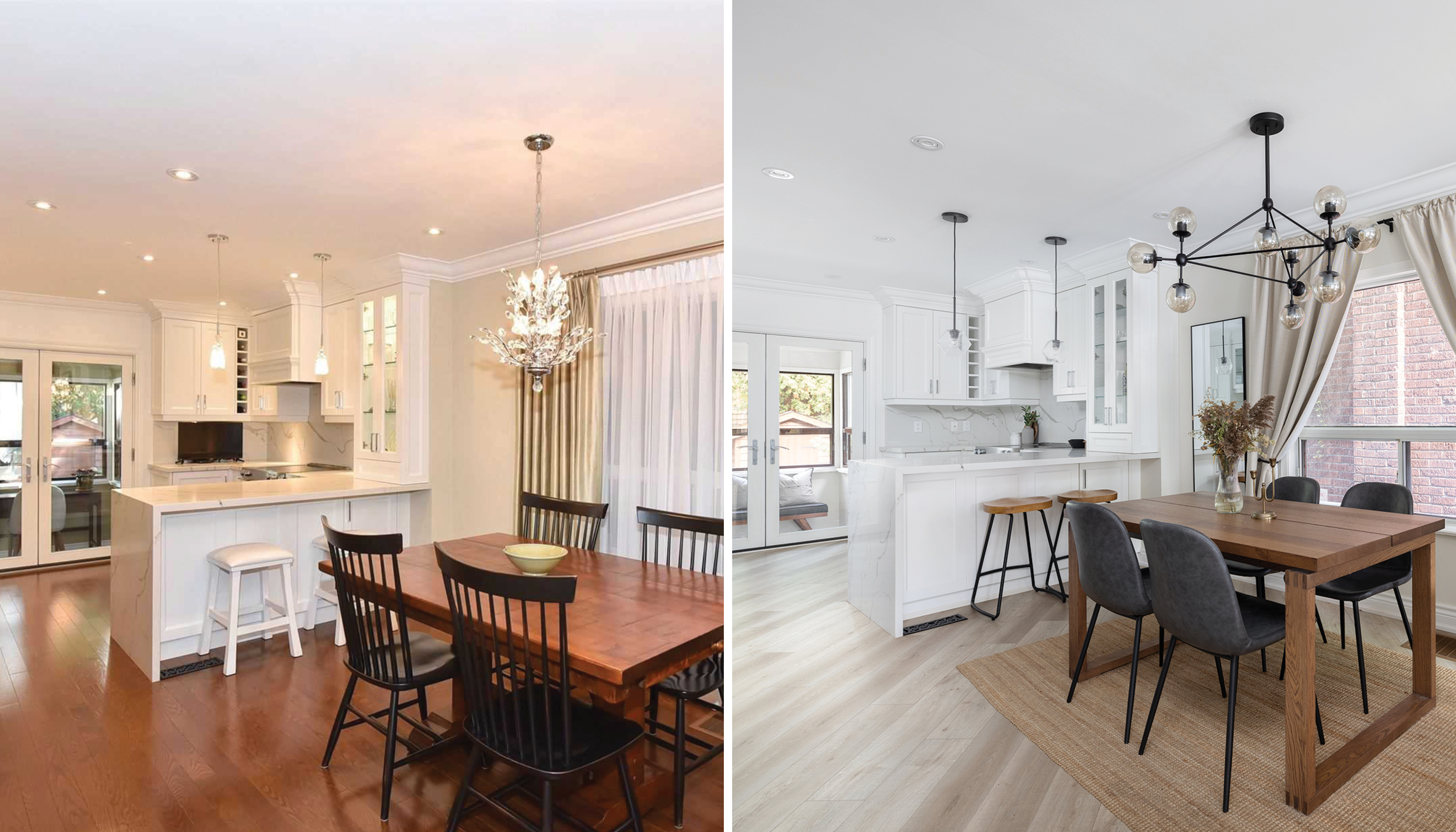 Kaye and her husband, Paul, bought this three-bed, two-bath Beaches semi in December 2020. Now, they’re selling the home to find a new place outside the city.

Kaye worked as a real estate agent for five years before she started her home-staging company in August 2021. “I was seeing real estate photos where the difference between staged and unstaged houses was so stark,” she recalls. “You could see it in the selling prices.” She now has a team of four full-time staff working with her on properties around Toronto.

Kaye describes the home’s previous decor as “very traditional.” Her goal was to update the space into something inviting, modern and calming. Kaye, who is half-Japanese, thinks of her personal style as Japandi, a mix of Japanese and Scandinavian design. “It’s lots of neutrals and very calm, muted colours,” Kaye says. “It’s light and airy but with contrast and natural elements.”

On the main floor, Kaye updated the deep walnut flooring to a lighter vinyl. “We laid it diagonally to make the space look larger,” she says. They also replaced the old fireplace mantle, which was eight inches deep, with a thinner marble surround. “Eight inches doesn’t sound like a lot, but when you’re dealing with Toronto semis, space is something you need to be mindful of,” Kaye explains. She then painted the wall and built-ins with a grey-green tone pulled from the marble. She chose the couches, from Urban Barn’s Mondo line, for their wire frames—delicate and airy. The olive charcoal rug is from Loloi. 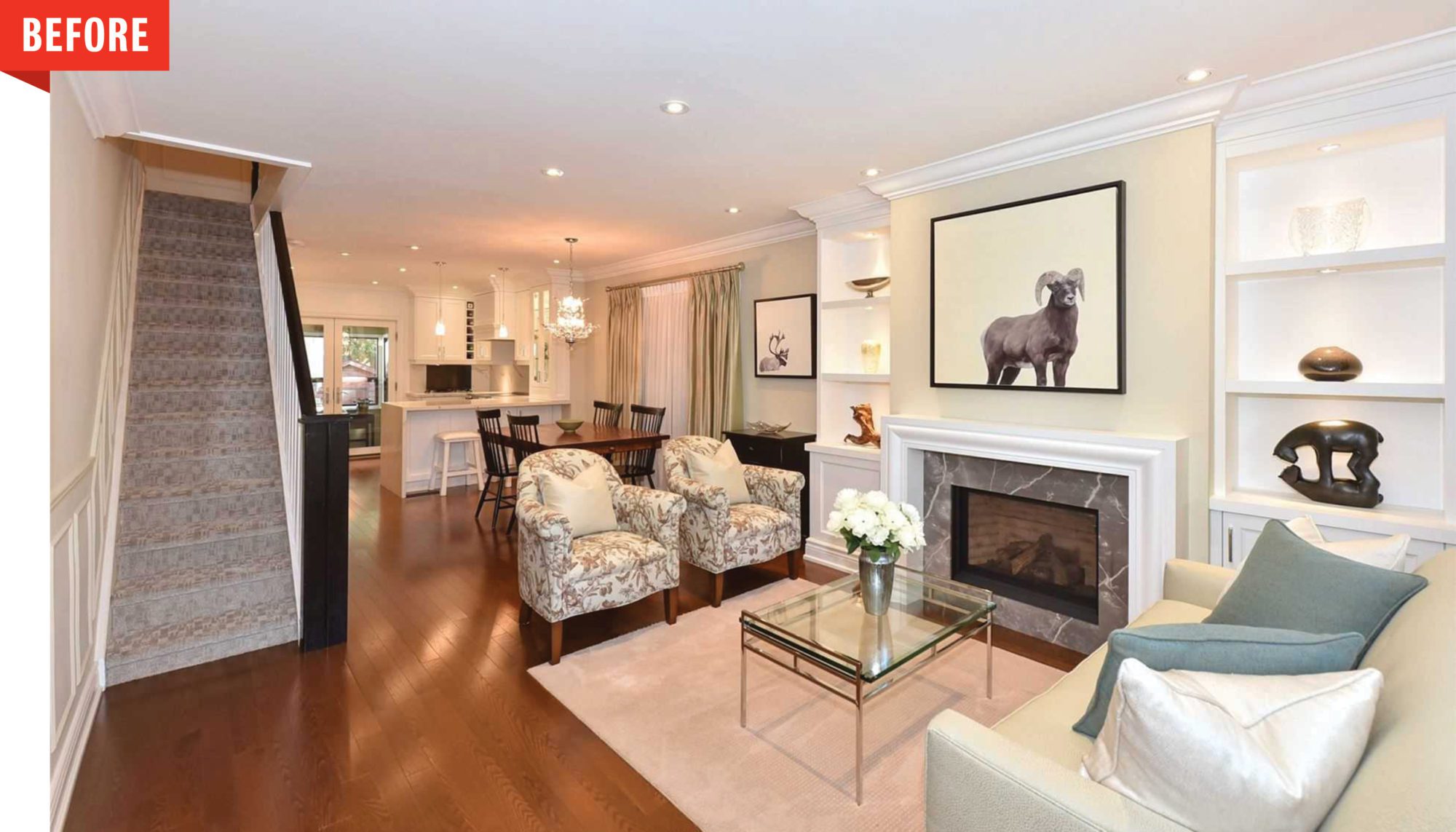 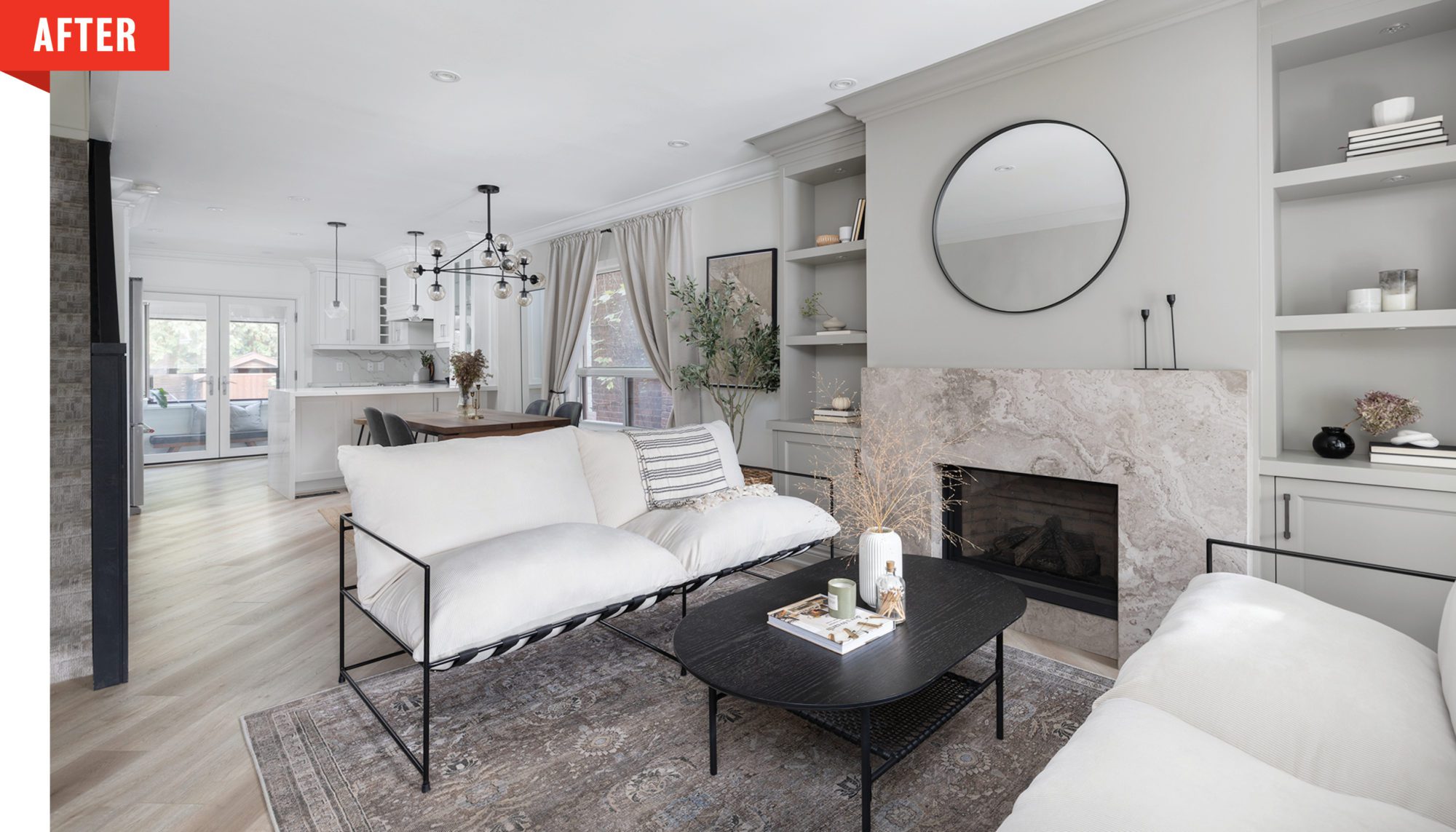 Kaye replaced the curtain rod and raised it to make the ceilings feel taller. She also swapped out the dated chandelier for a modern bronze one from Wayfair. The wood-tone dining table and jute rug add some natural textures to the space. 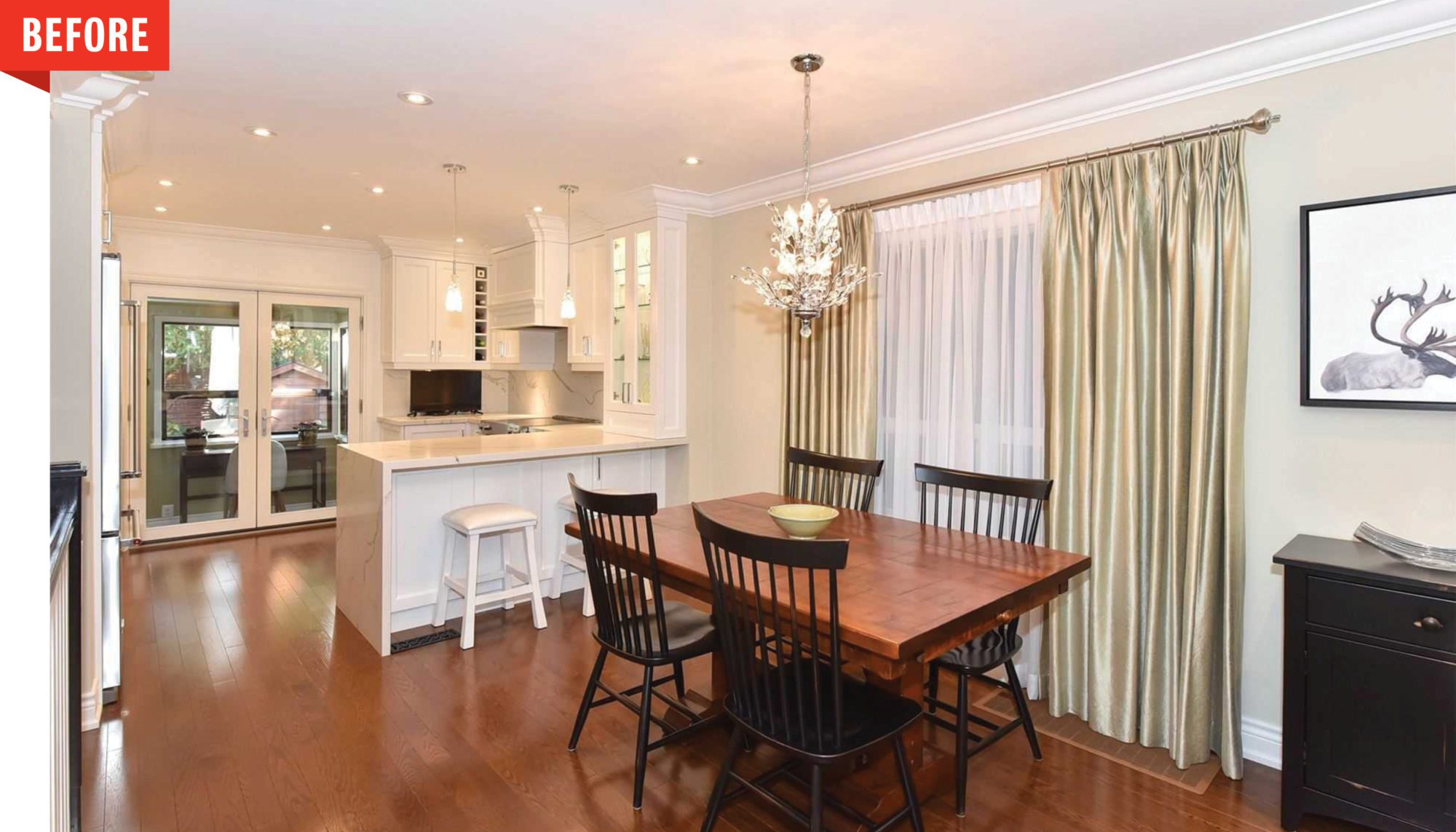 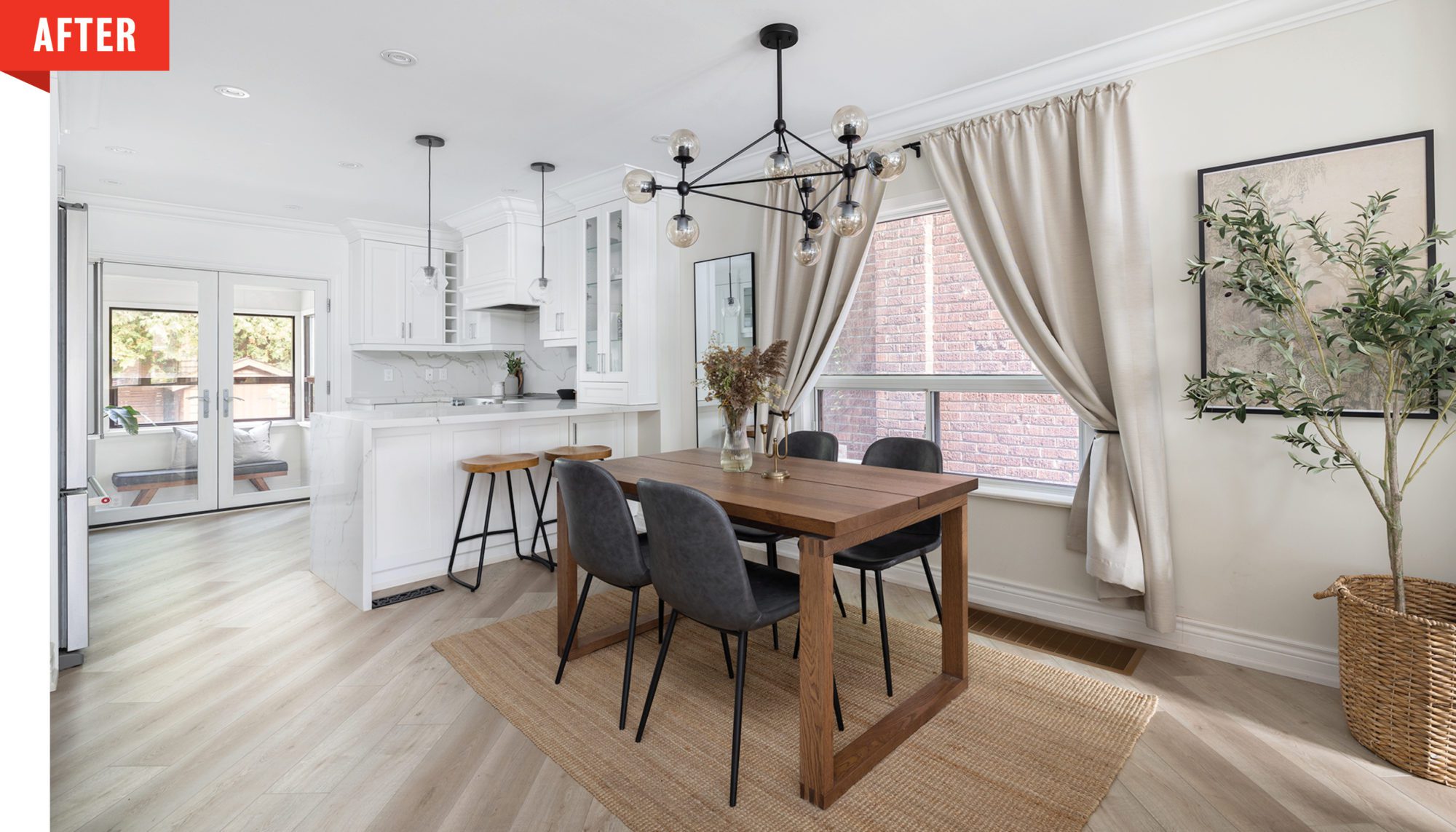 The kitchen was renovated by the previous owner, so Kaye didn’t have to do much here. But she did update the pendant lights above the island with a model from West Elm. The countertops are made of quartz. 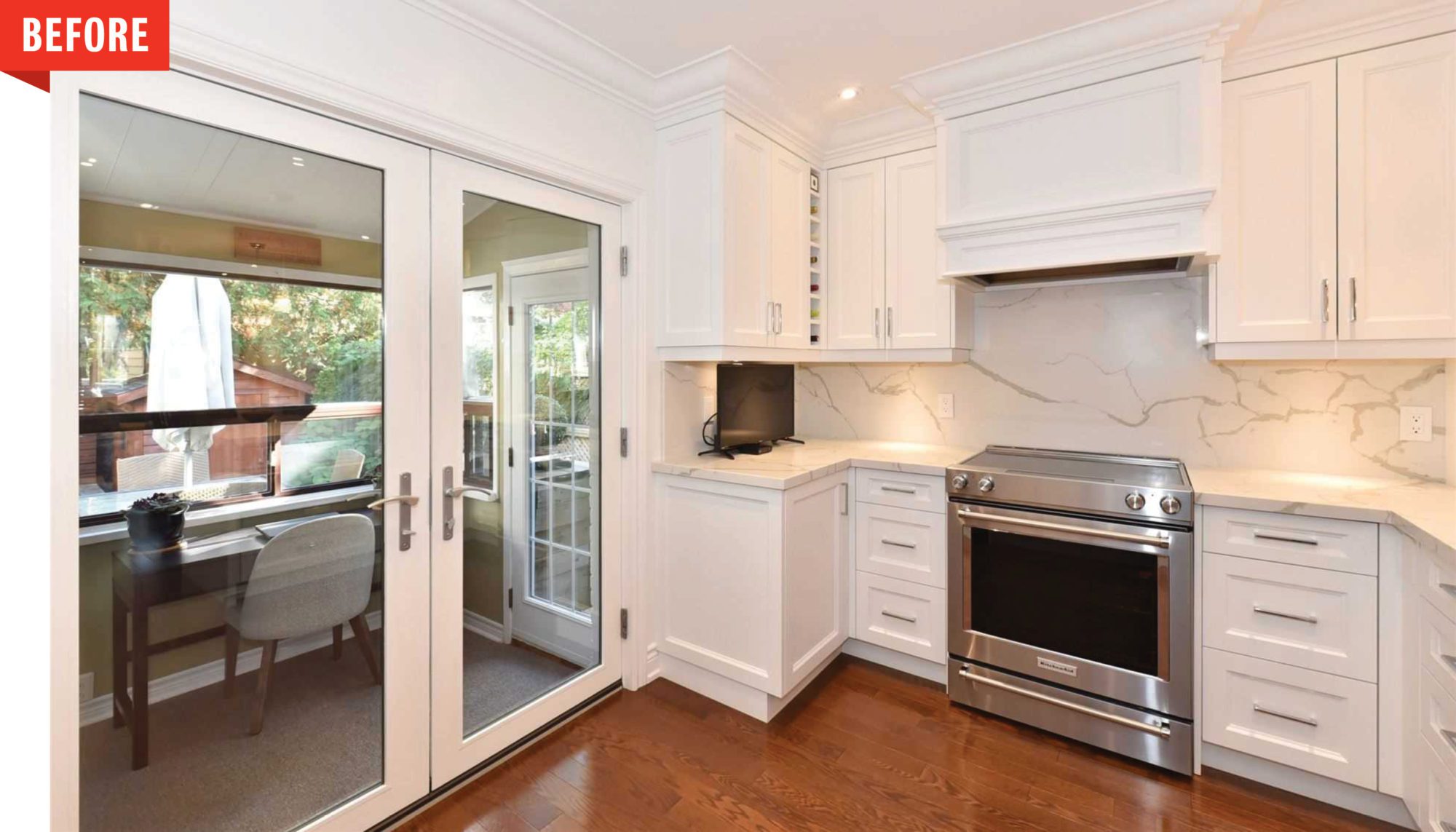 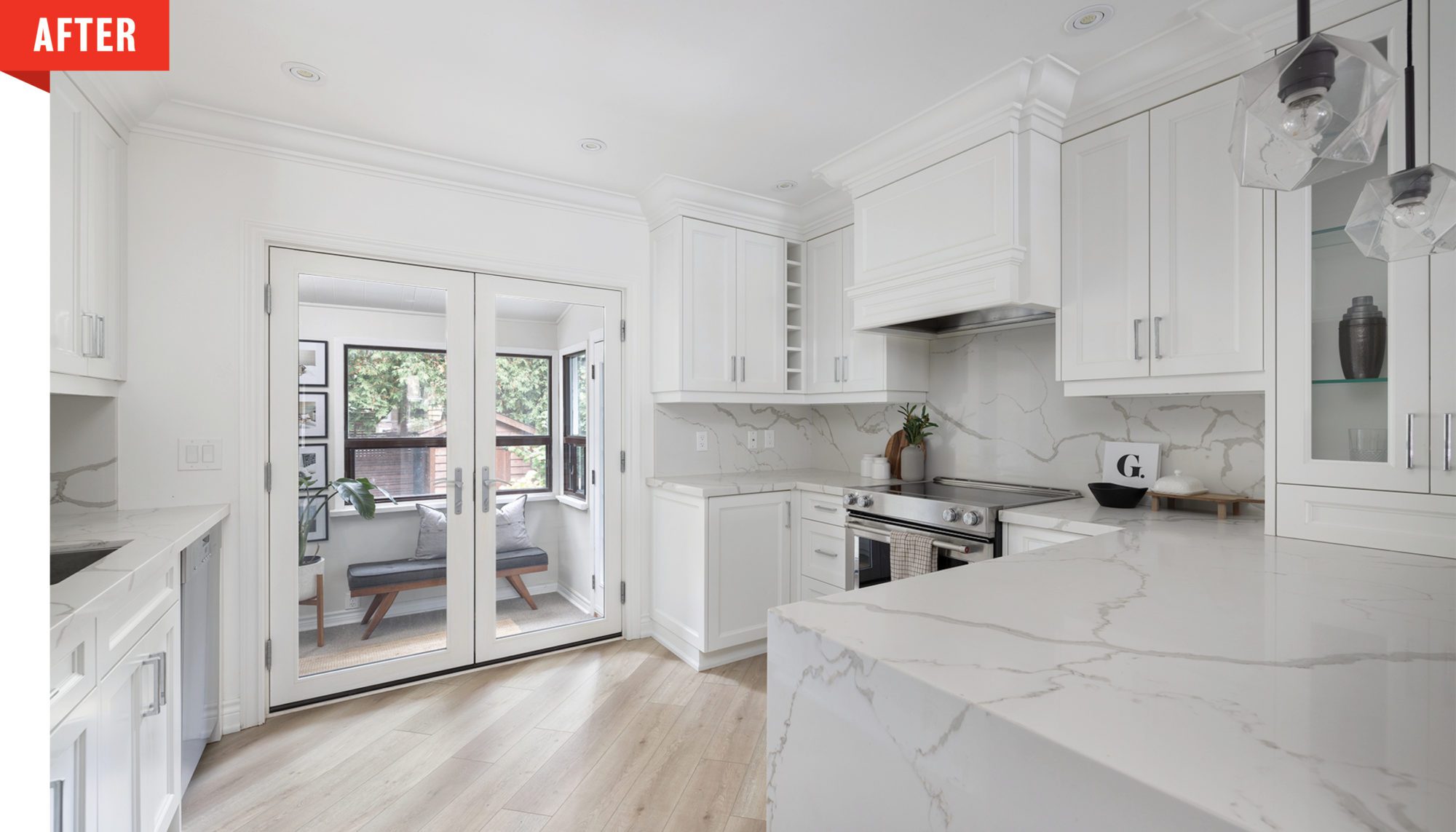 The mud room was being used as an office, but it’s the transition zone between the kitchen and the backyard, so Kaye added storage against the back wall and a bench for donning and doffing shoes and boots. 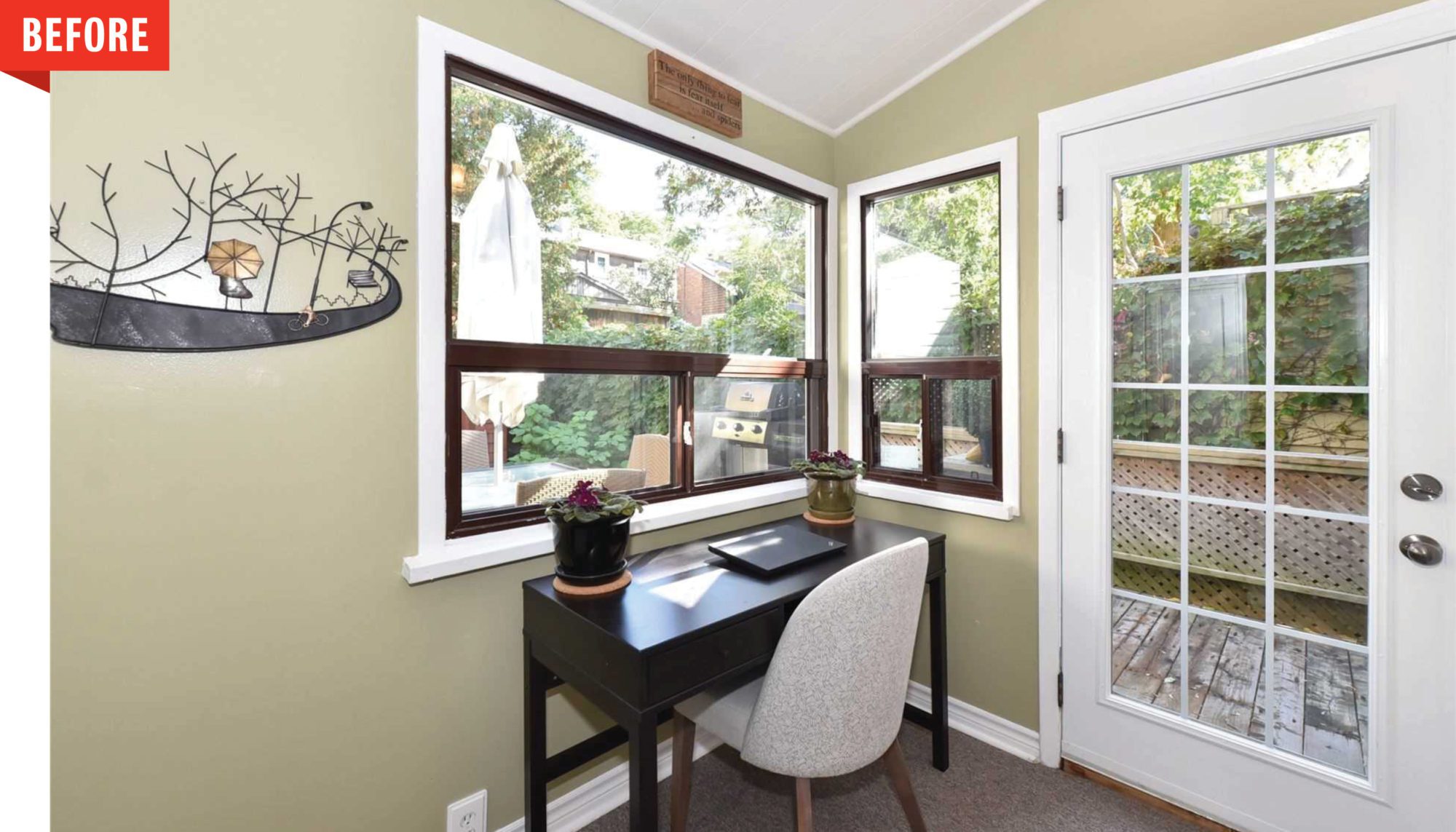 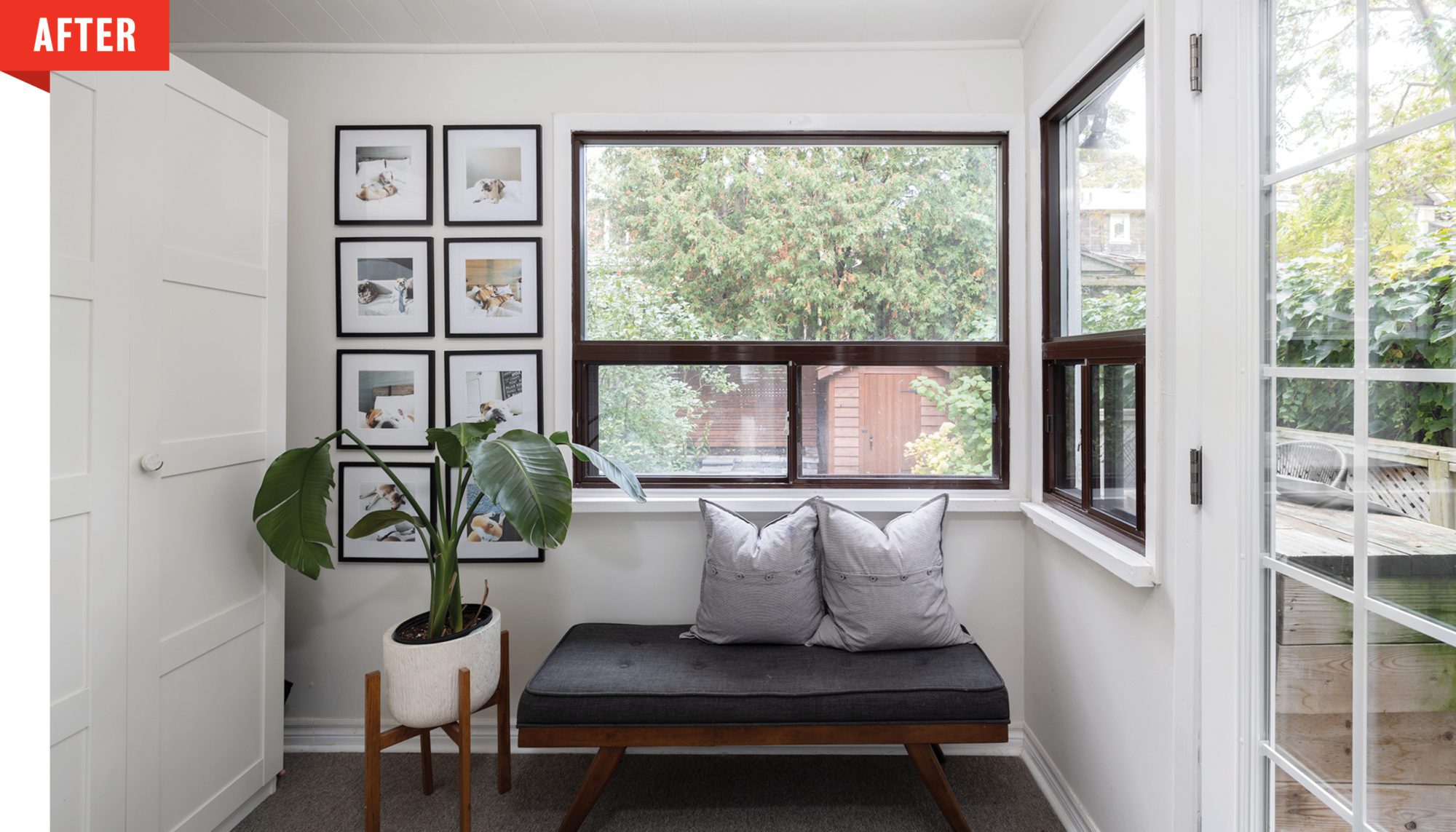 Kaye knew that this vaulted alcove in the main bedroom was wasted space. It wasn’t deep enough to create a full closet, so she custom-made a built-in. She also used the raised-curtain-rod trick here. The room and built-ins are painted in the same shade of Benjamin Moore’s Classic Grey. “It’s a peaceful, grounding colour,” she says. 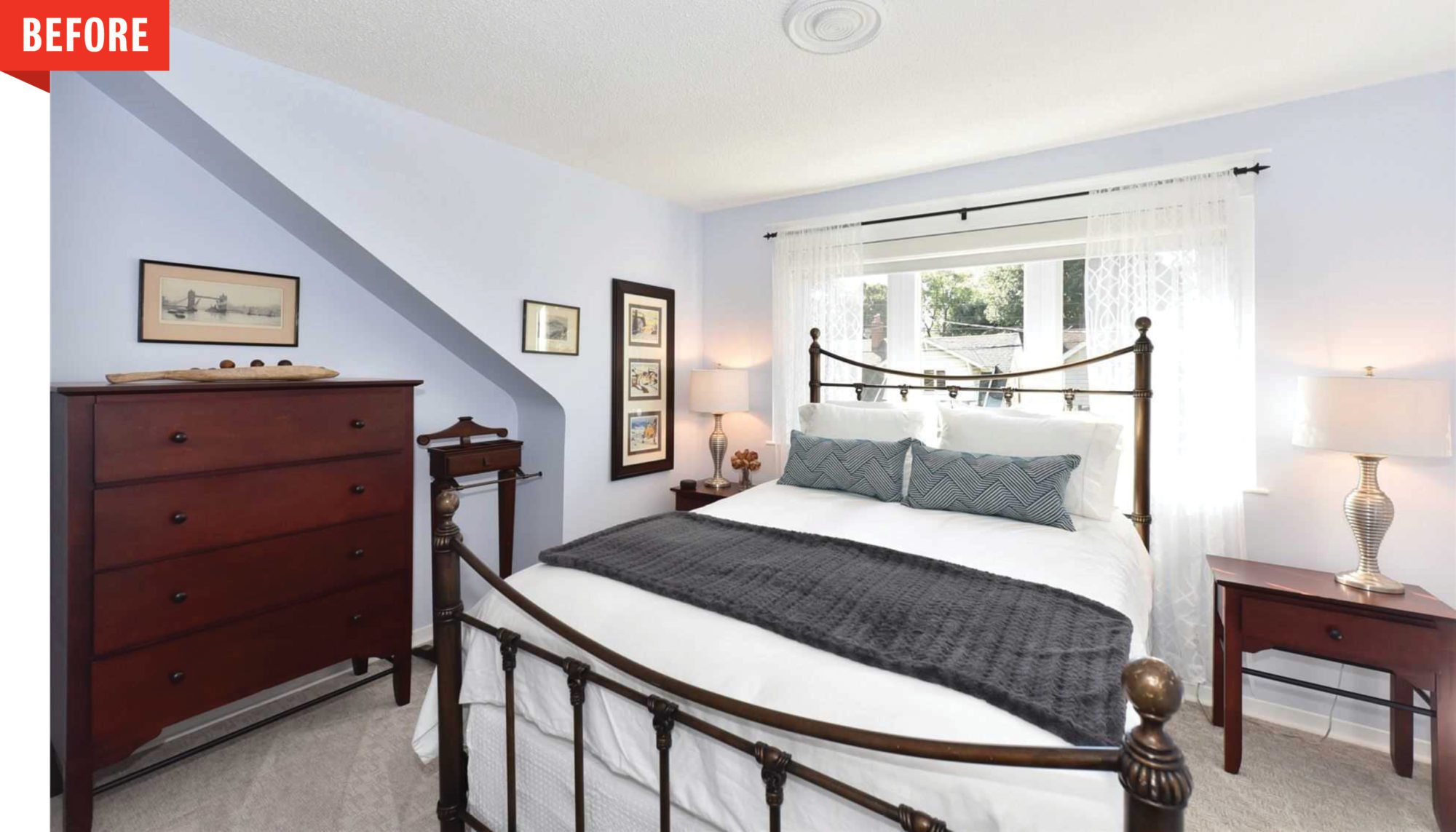 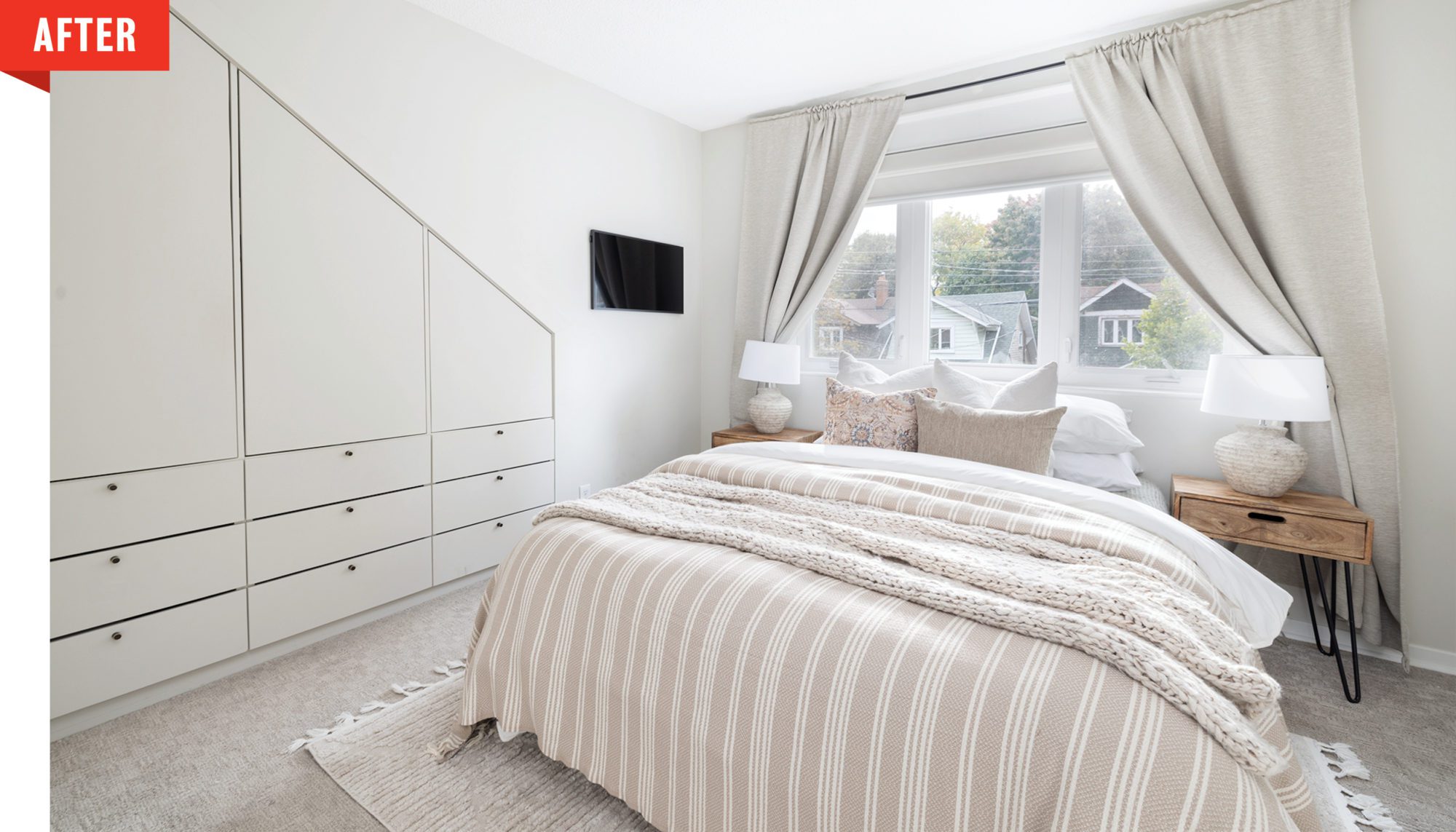 Kaye staged this room as a nursery. “People looking in this area are young families,” she says. “If it was staged as, say, an office, it would be hard to visualize its potential as a bedroom.” A wooden crib is complemented by floating wire shelving from CB2. 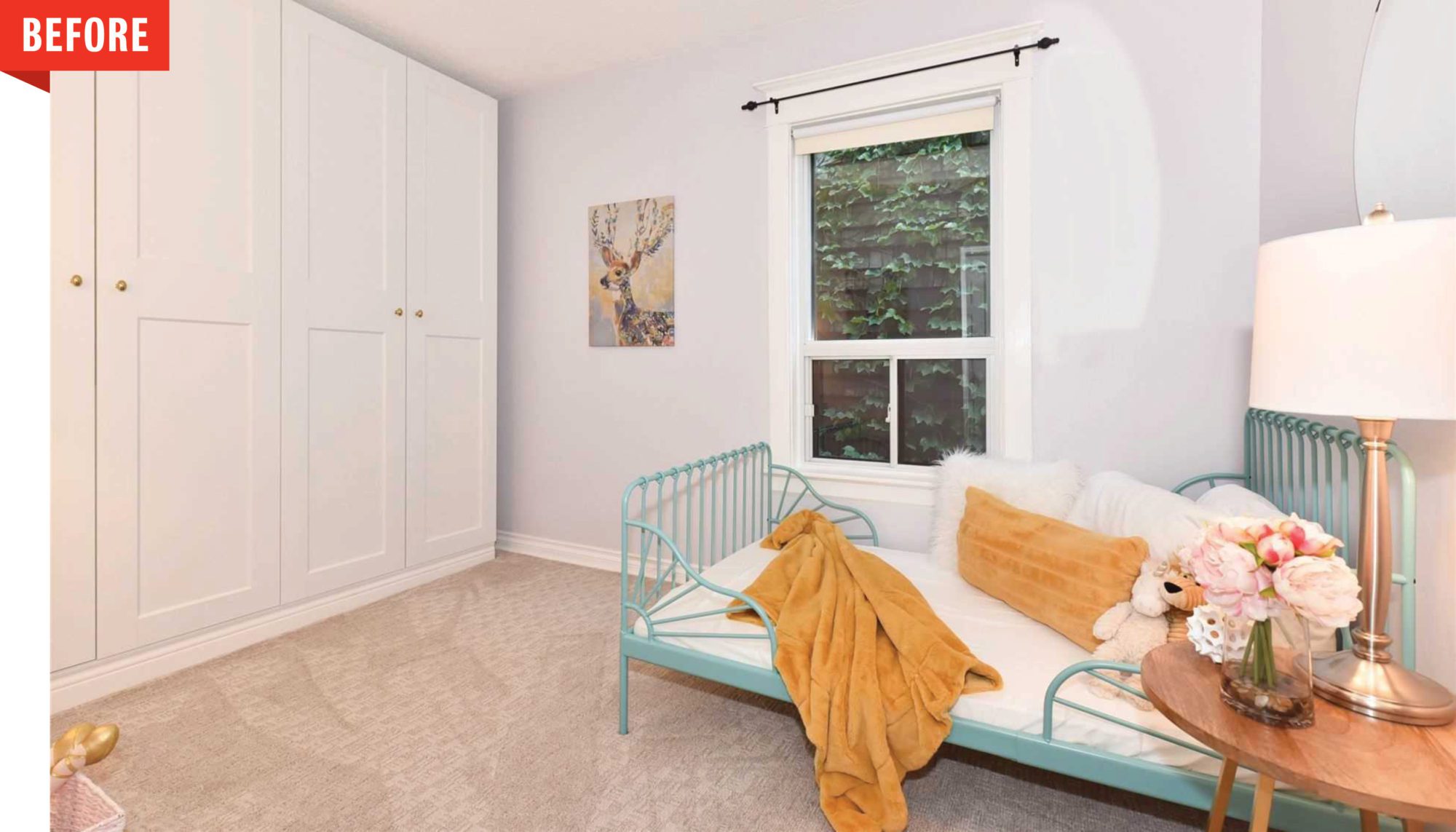 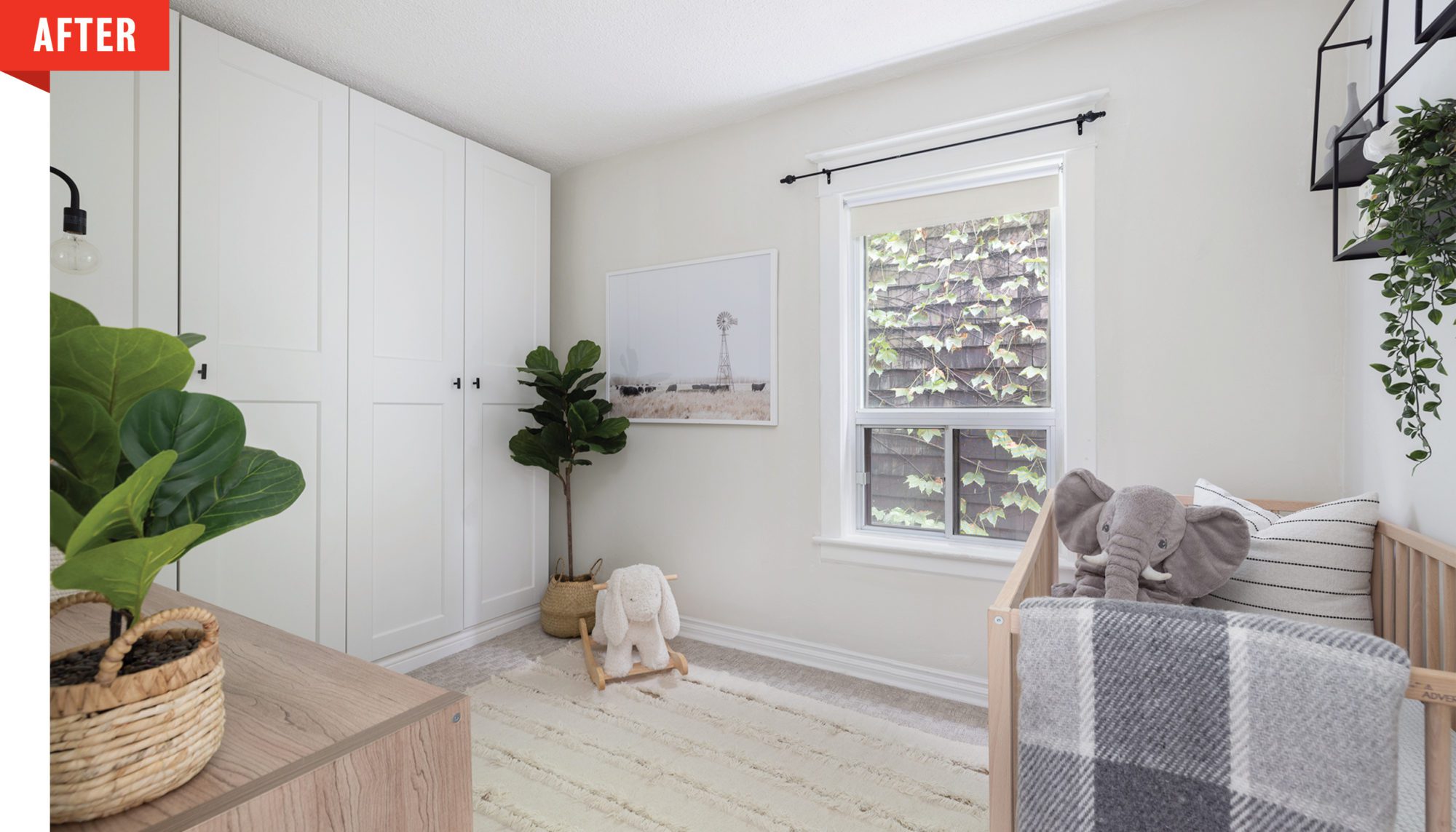 “The window faces the backyard, overlooking a big tree, and it’s the most peaceful view,” Kaye says. She staged the room with a canopy tent over the bed and added an area rug, despite the wall-to-wall carpeting, to cozy up the space. 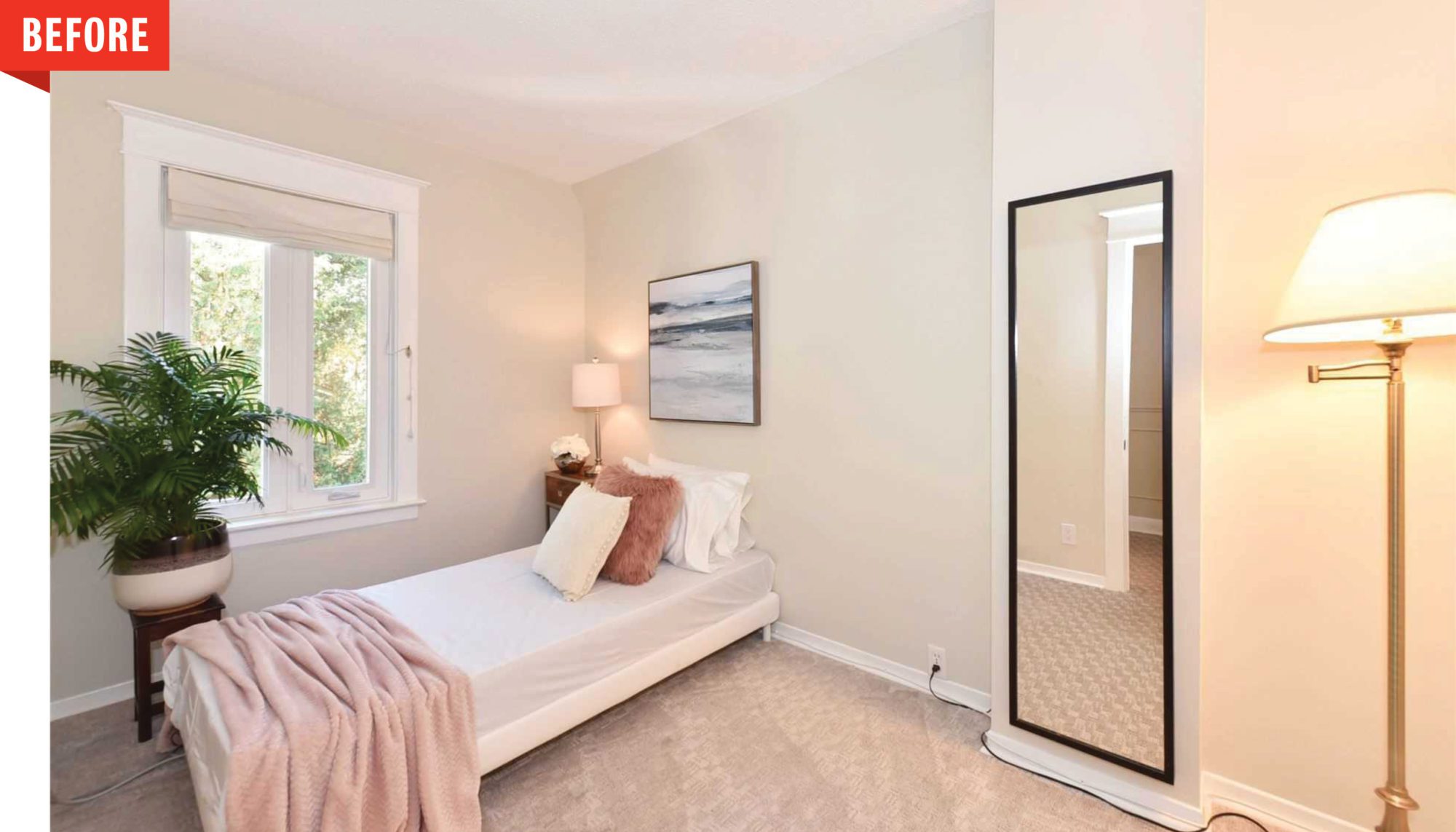 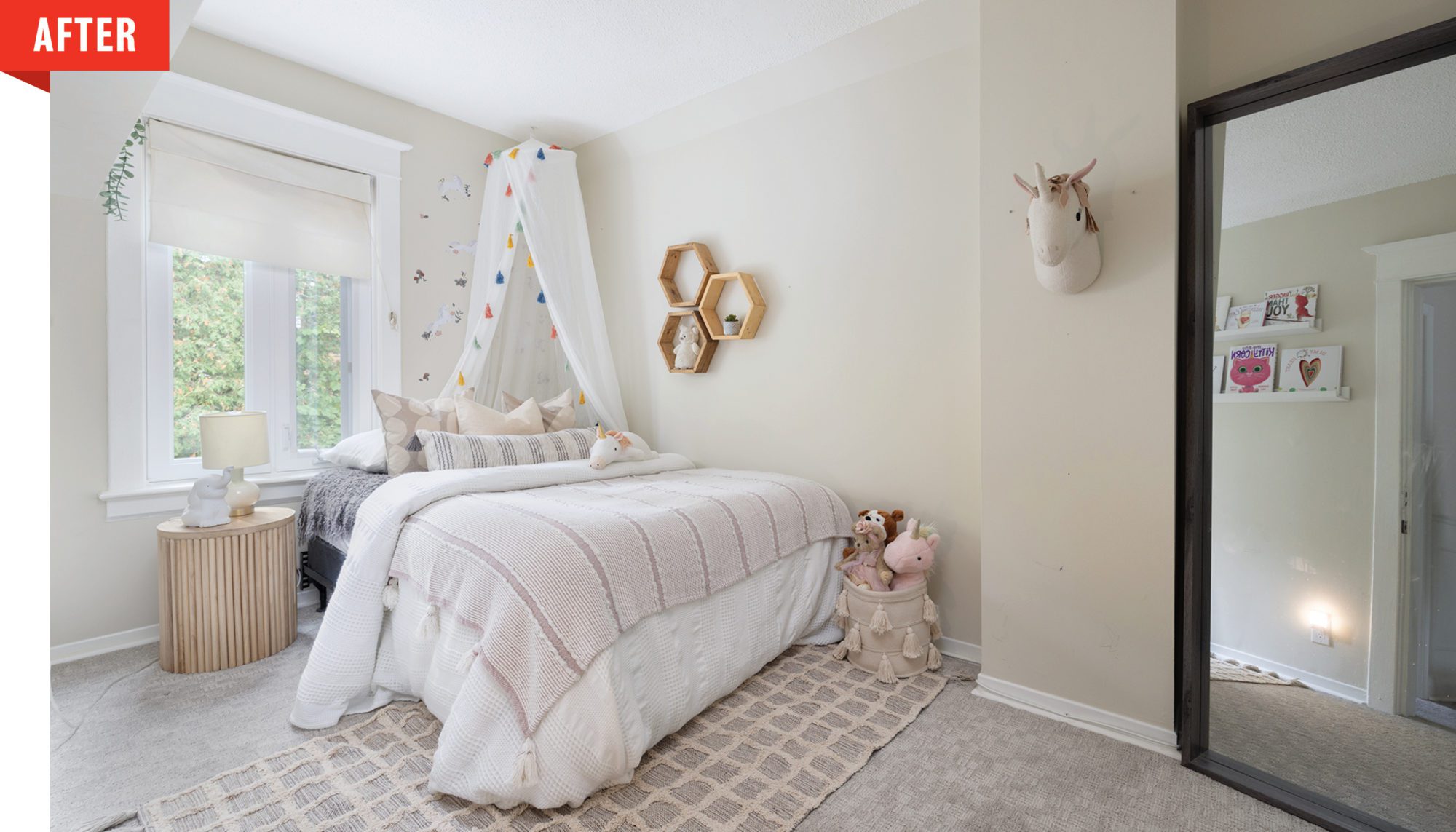 This space was also recently renovated, so there wasn’t much for Kaye to do. She did swap out the dark vanity with a lighter model and replace the chrome faucets with matte-black ones. 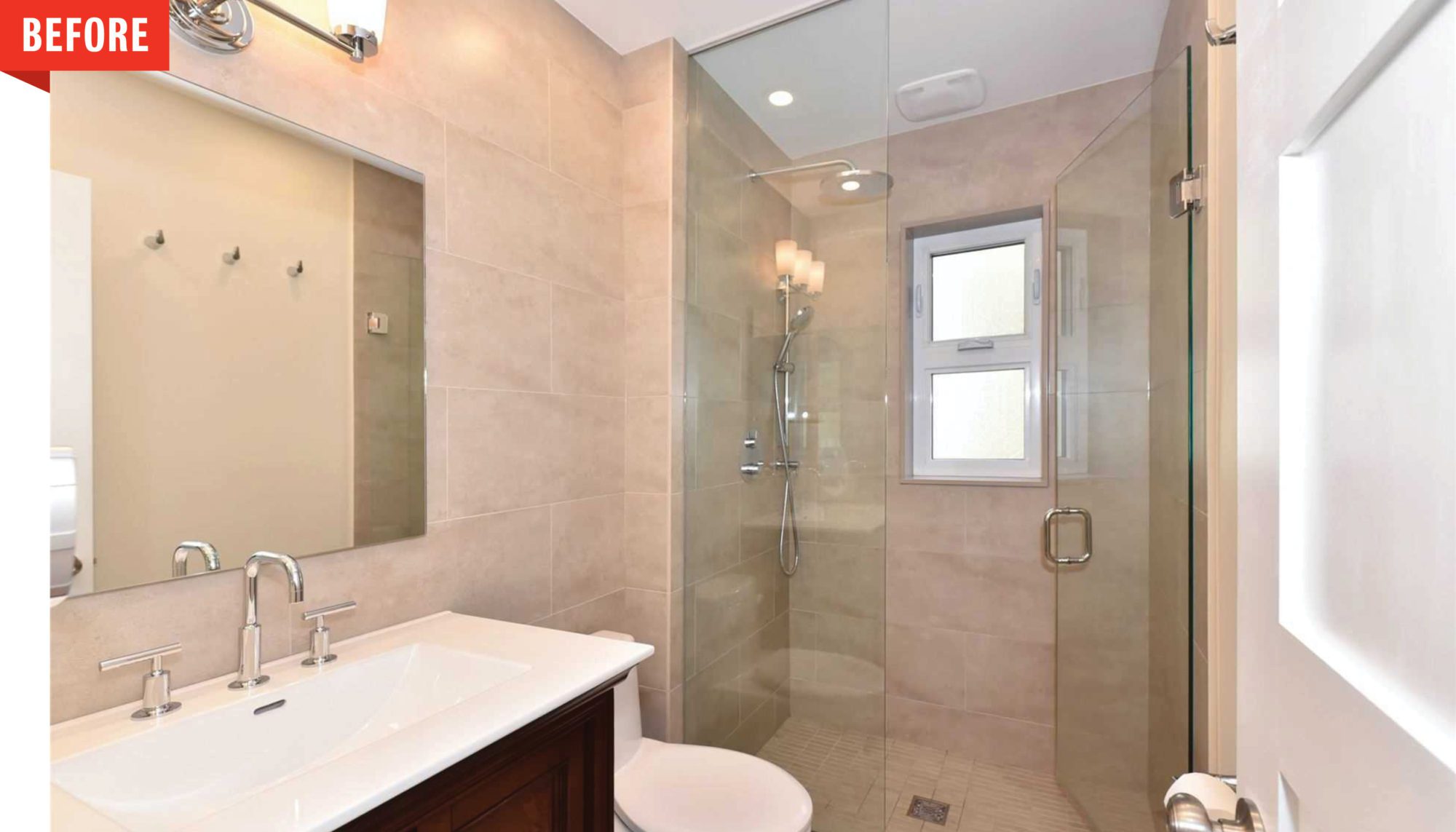 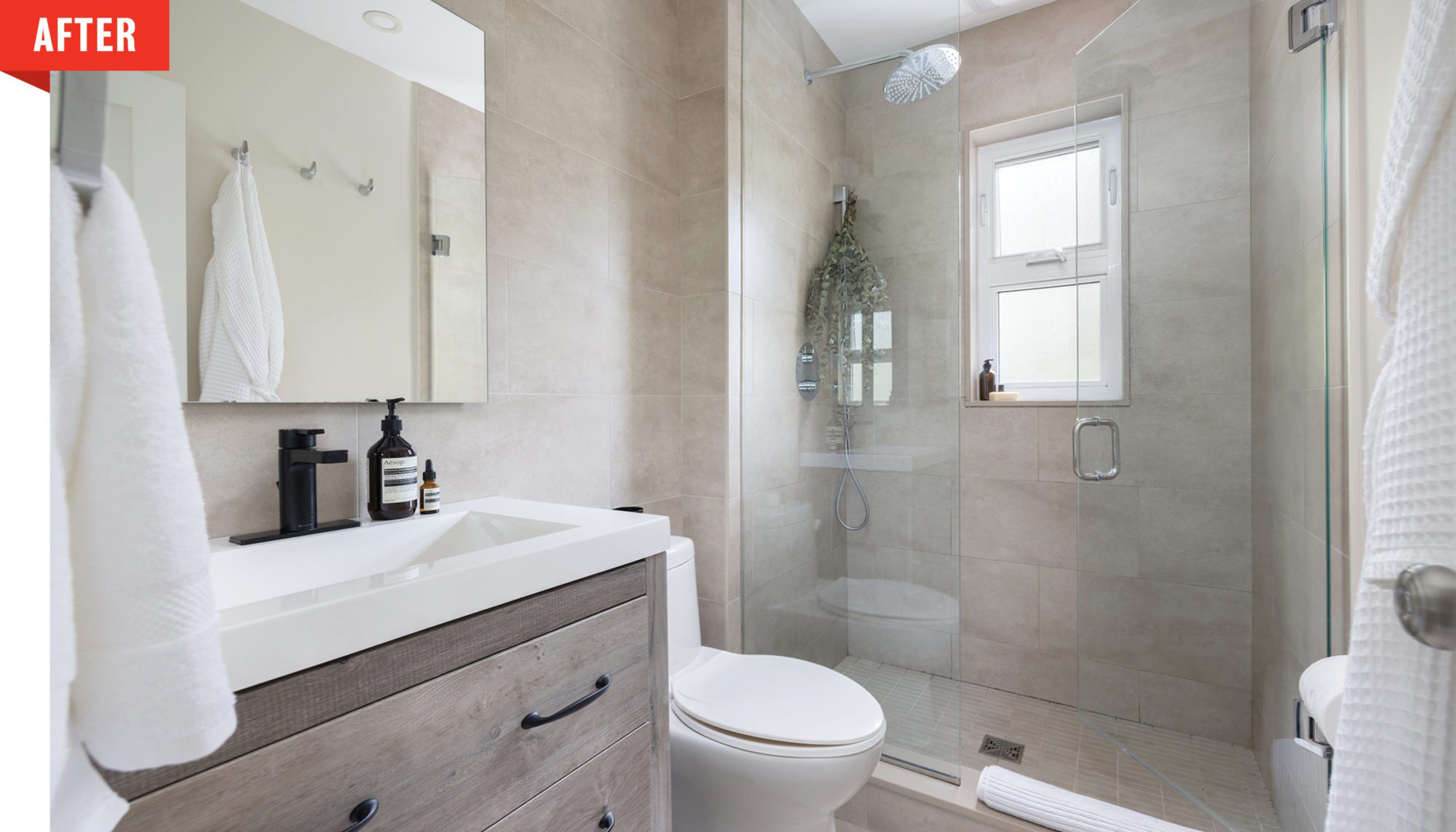 Kaye admits that she felt nervous about painting the fireplace and built-ins black, worried it would make the place feel dark and small. But it ended up being the right move. “It provides so much drama, and it made the space design-forward,” she says. The sectional couch is the Movie Night model from Sundays. She opted for white to offset the black. 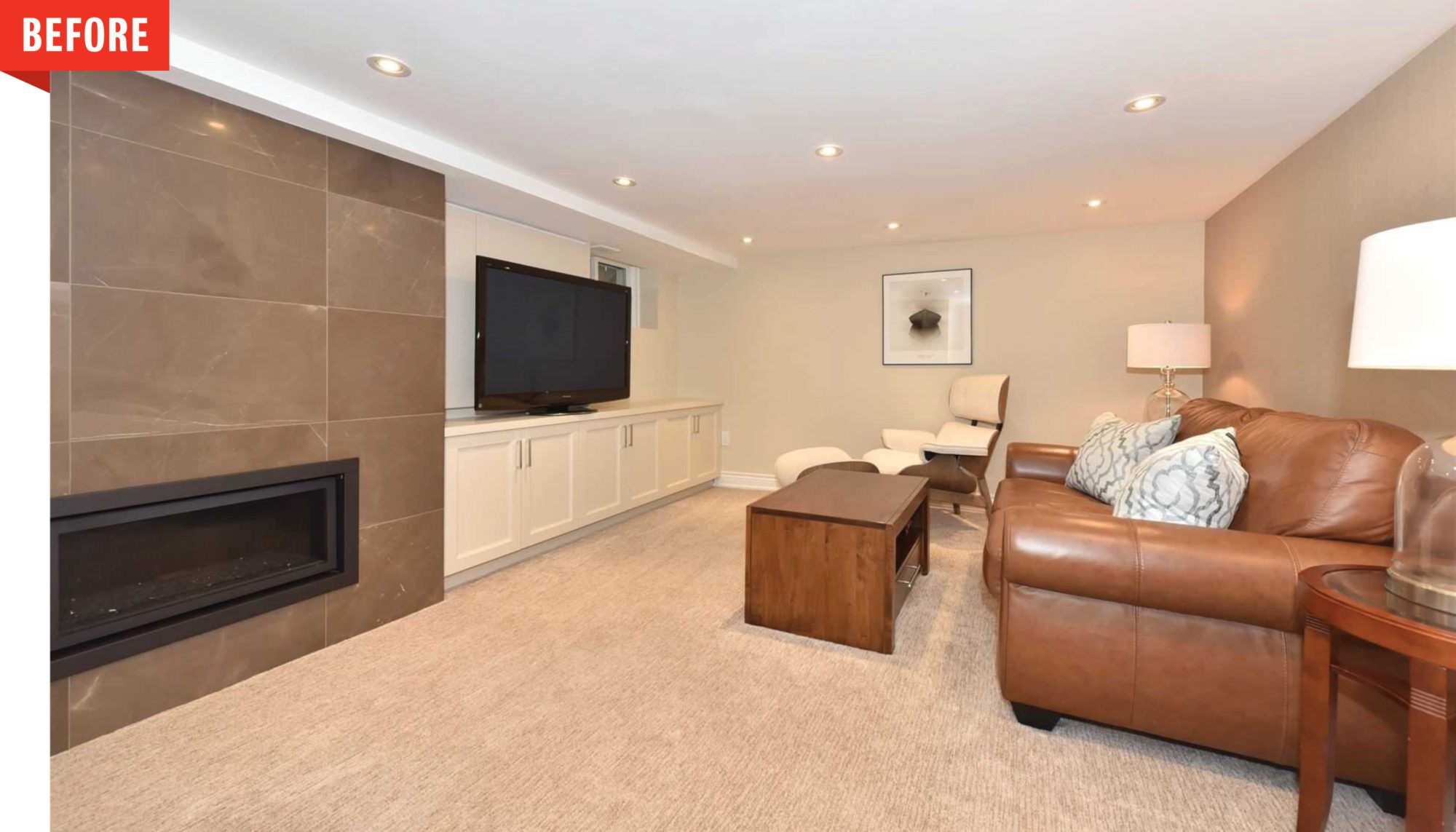 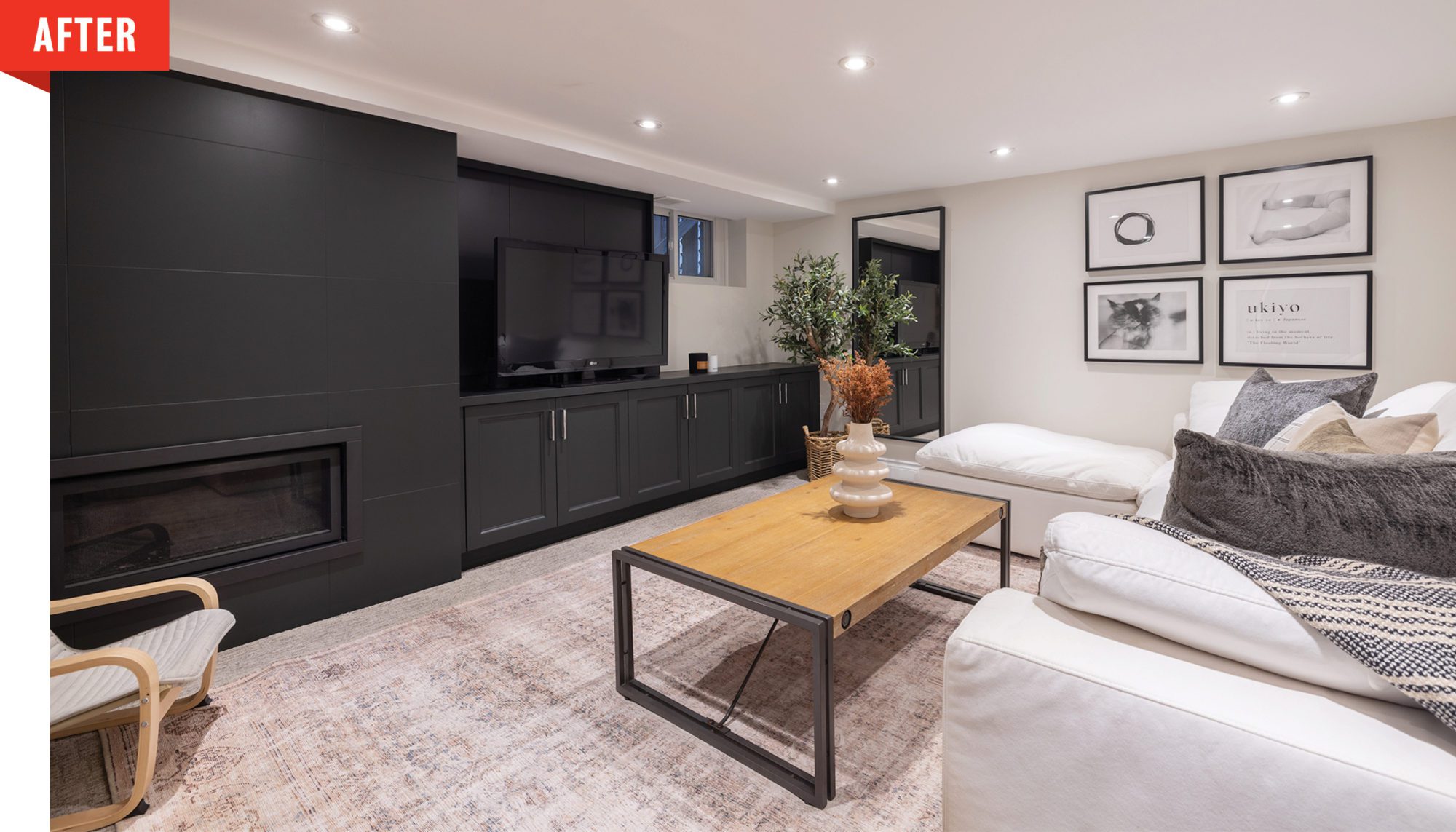 Here, too, the vanity was switched with an updated wood-tone model and a matte-black faucet. 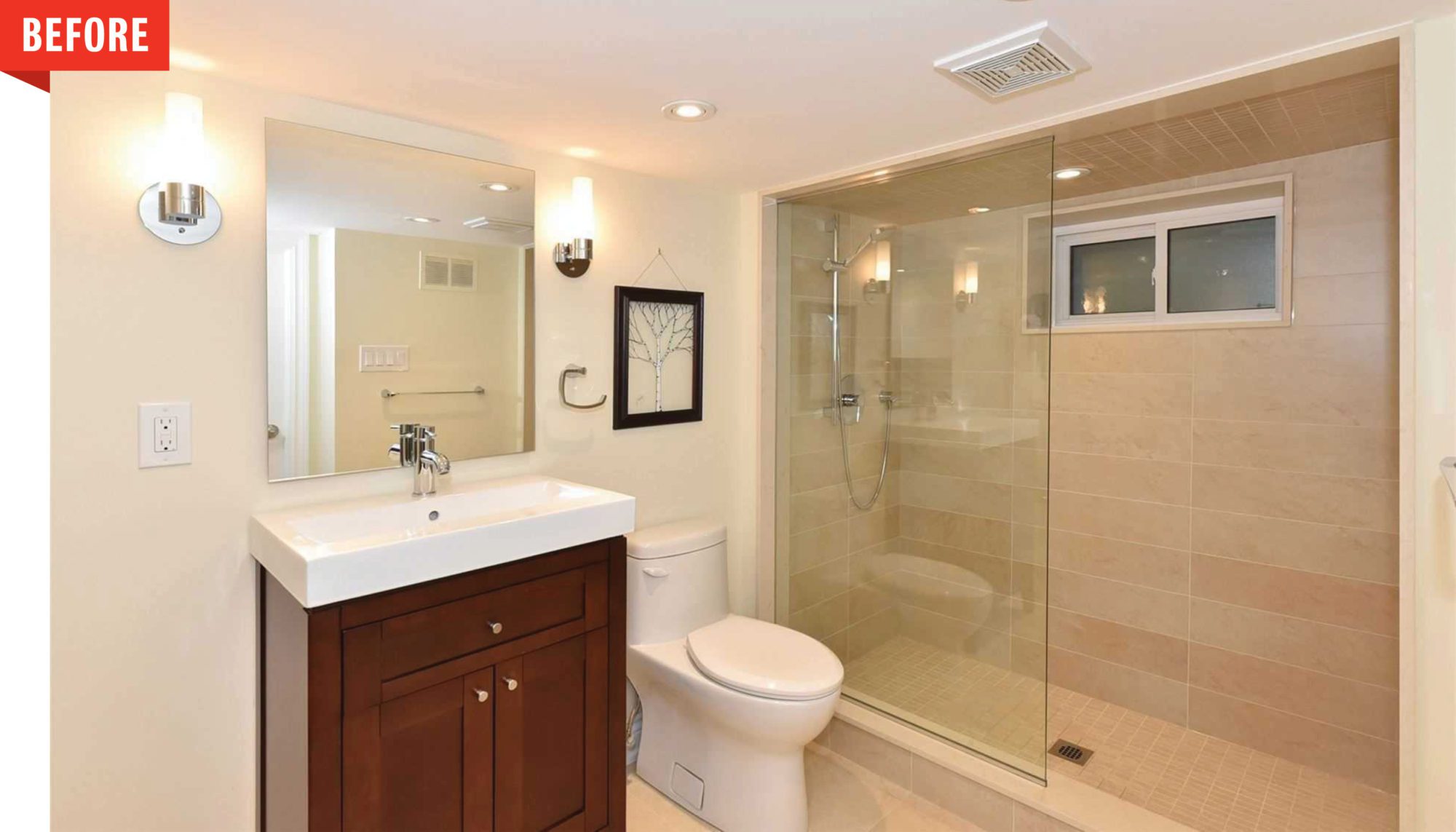 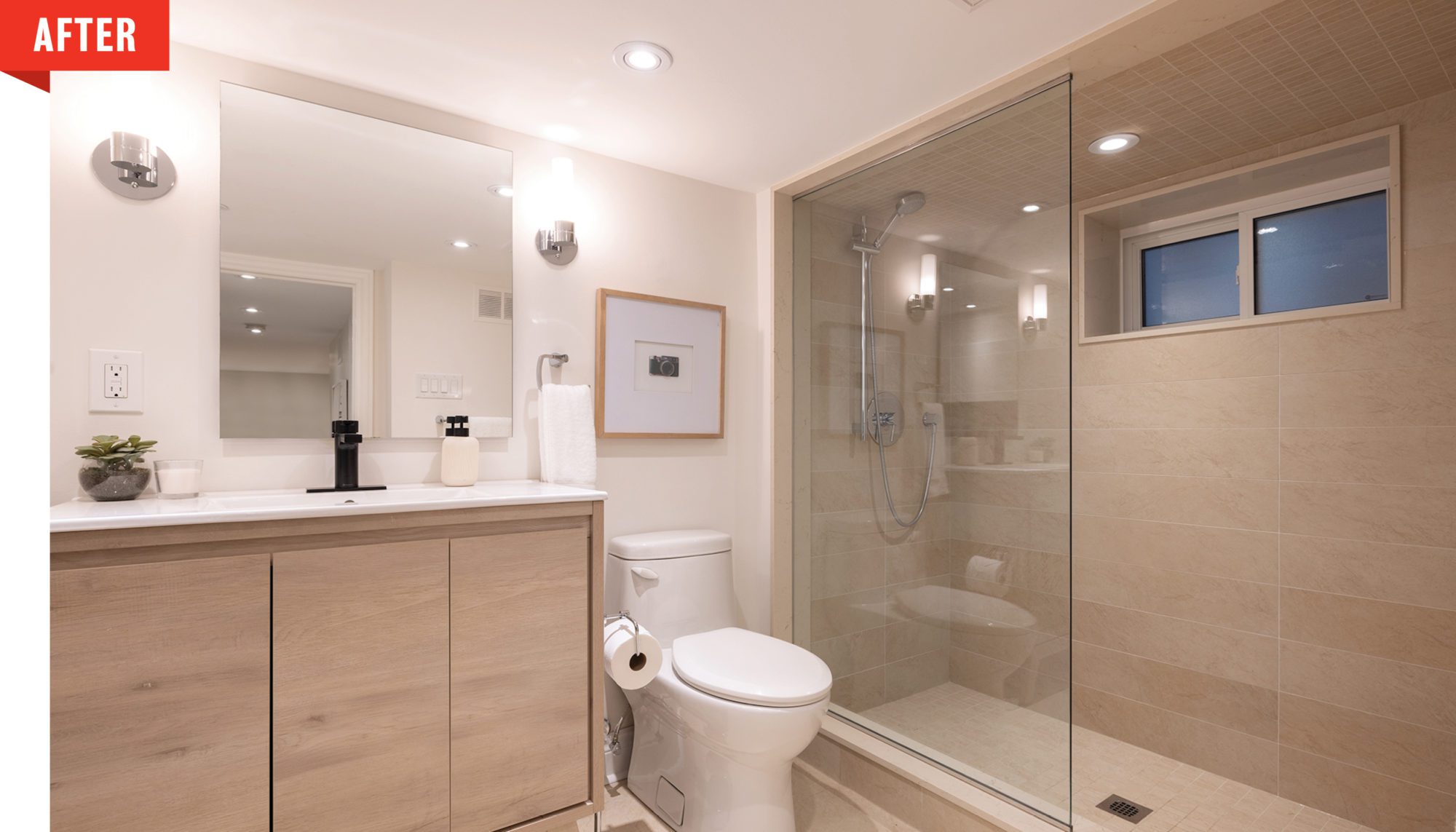 The backyard was already in good shape. There was previously a dining set here, but Kaye opted for a sectional outdoor sofa instead. 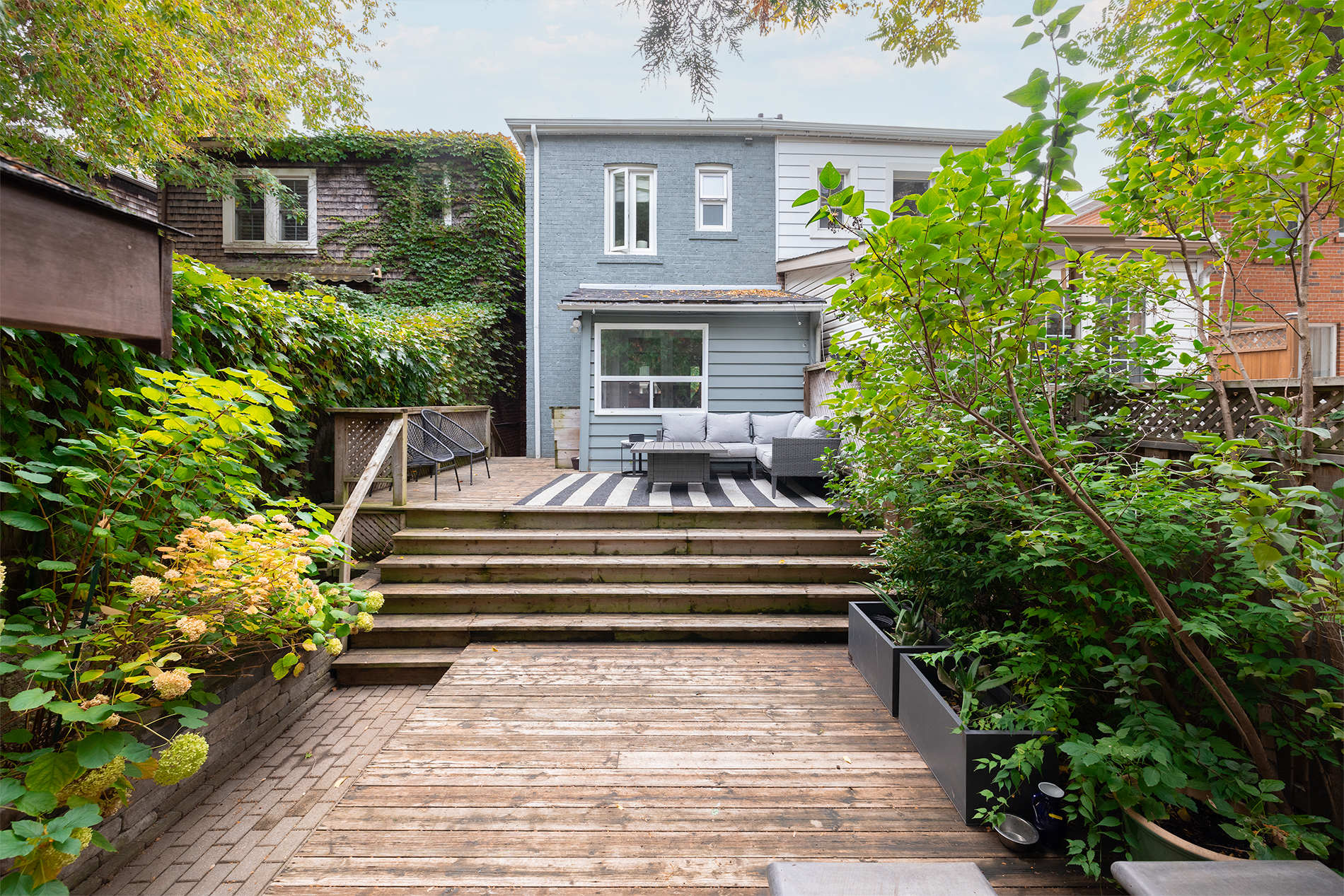 When Kaye purchased the home, the front porch was completely open. “We wanted to make it a little more private, so we built a railing and painted it black,” she says. She also outfitted the porch with a small sectional and an area rug. She had the cushions reupholstered with striped Tonic Living fabric. And she built a small flower bed in front of the porch. 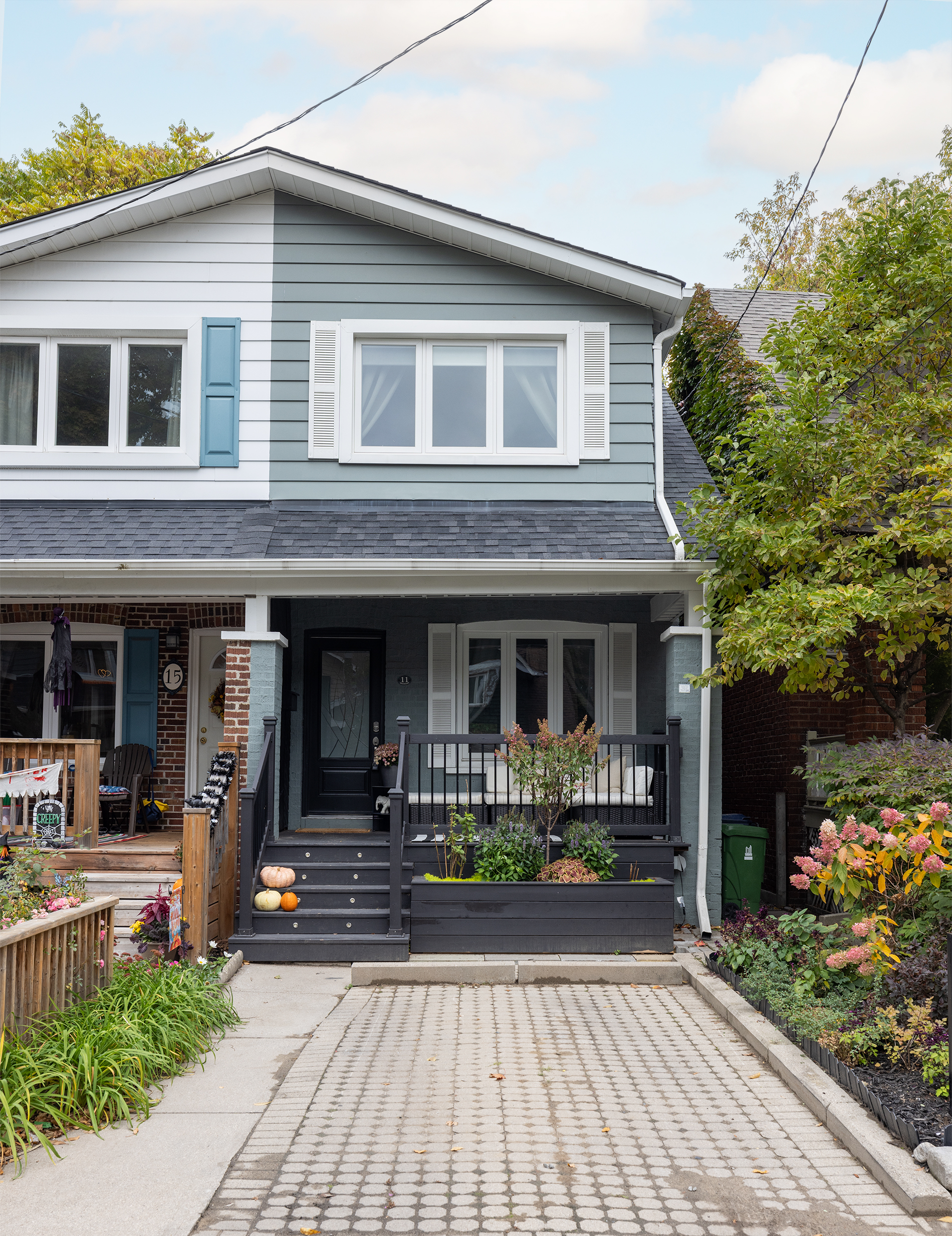 Topics: Before and After Real Estate renovation Staging the beaches Toronto