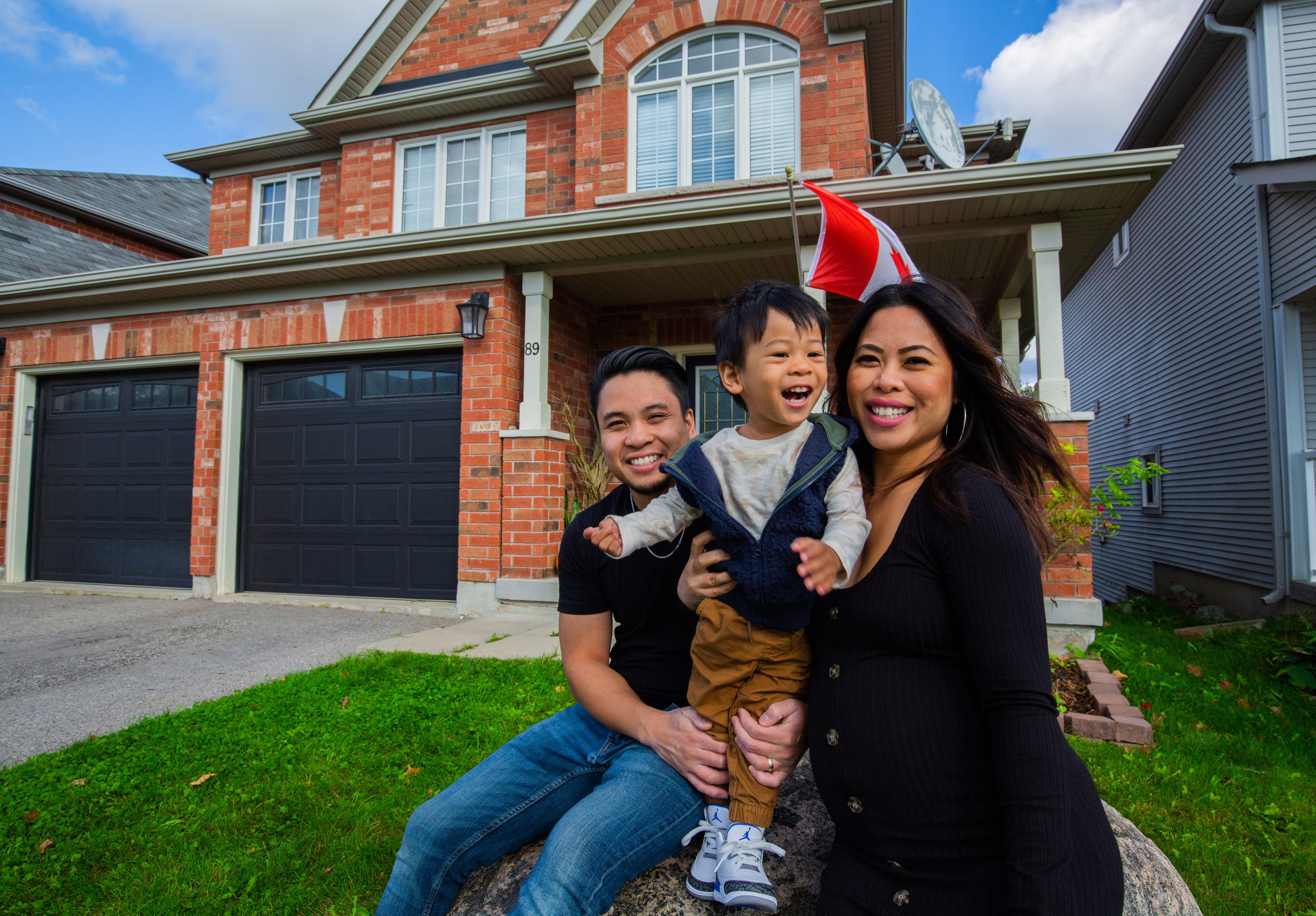 The story: In 2015, Darlene and Richie bought a one-bed, two-bath condo near Dufferin and Allen for $338,000. They really liked the location. Yorkdale Mall and Costco were both a short drive away, and Darlene’s parents lived close by in Thornhill.

For commuting to work, Darlene could hop on the train at nearby Downsview station (later renamed Sheppard West station), while Richie drove 50 minutes up the 404 to his office in Aurora.

When Ezra was born, in 2019, the family enjoyed talking long walks together in Downsview Park. But Darlene and Richie had always planned on further expanding their family, and their 800-square-foot condo wouldn’t quite cut it. So they came up with a plan: sell their condo, then use the profits to purchase a new home.

In March 2021, with the Toronto real estate market scorching hot, they decided to cash out, listing their place for $599,000. The couple figured they would need to make at least $500,000 from the sale in order to secure financing for their next house.

As prospective buyers booked viewings of their condo, the couple set a $1-million budget and started searching. On their wish list: a detached with a backyard and a double garage, located within an hour’s drive of both their jobs and Darlene’s parents in Thornhill.

The search: Darlene and Richie began looking near their condo at Dufferin and Allen. But all of the detached listings within their budget were too close in size to their condo. After a month of fruitless viewings in the city, the couple expanded their search to the outskirts of the GTA, realizing it would be the only way to sufficiently upsize, given their budget.

At the time, Darlene worried that moving out of the city would drastically lengthen her work commute, so the family bought a second car to cut down her travel time.

The couple then made offers on houses in Whitby and Ajax, but lost out on both occasions. In April, Darlene’s sister, Josielynn, recommended they check out Keswick, a small community on the southern tip of Lake Simcoe, about an hour’s drive north of Toronto.

Josielynn had been living in Keswick for the past year and she loved it. There were plenty of forests, trails and public beaches in the area. Darlene and Richie also liked the idea of raising Ezra close to nature—so they decided to take a look.

In mid-April, Darlene and Richie made an offer on a three-bed, three-bath detached, located just a five-minute drive from Darlene’s sister. But once again, they were outbid, when the place sold for $10,000 higher than their $1-million budget.

Two weeks later, they came across another detached on the same street, listed for $799,000. Out front, it had a covered porch and a beautiful red-brick exterior. Inside, at 2,500 square feet across two storeys, with four bedrooms and three bathrooms, it was more than three times the size of their Toronto home. And out back, it had a double garage and a spacious yard.

Another plus: the place was move-in ready. On the downside, it would require some upgrades: the kitchen appliances, cabinetry and floor tiles were all dated and the basement was unfinished. The couple estimated those upgrades would be costly, but they decided, if necessary, they could always save up and do those renovations in the future.

Several listings in the neighbourhood had sold recently, indicating high demand, so Darlene and Richie anticipated yet another bidding war. On the May 3 offer date, they made an aggressive bid at $161,000 above asking. Five days later, their agent, Sean Sinnapan, called them with the good news: they had beaten out four other prospective buyers.

The outcome: Three days after their offer on the Keswick home was accepted, the family lucked out again, selling their condo for $585,000—a profit of nearly $250,000 after only six years. That gave them some cash to put toward the down payment on their new home. Later that month, Darlene and Richie got even more good news, when they found out they were expecting a second child.

In July, they took possession of the Keswick home and moved in shortly after. Richie’s drive to his office in Aurora now only takes 20 minutes, reducing his commute by more than half.

Darlene’s commute to her downtown job is a bit longer, at just under an hour, and her parents are 40 minutes away. But she doesn’t mind the extra driving, considering the upgrade in the size of their home.

Since moving in, Darlene and Richie are enjoying their new environment. It’s a 20 minute drive south to Newmarket if they want to visit most big box stores, but their place is close to good parks and grocery stores. Recently, during the Thanksgiving weekend, they visited a local farmer’s market and beach with Ezra.

Darlene and Richie aim to update the kitchen and finish the basement within the next five years, at an estimated cost of $80,000. They’re expecting their second child in January 2022. After that, they plan on raising both kids in Keswick and sticking around for the next 10 to 15 years. While they miss living in the city, Darlene and Richie are grateful to be homeowners—it just required a bit of sacrifice.