Who: Craig Thornton, 42, marketing executive, and Jessica Jardine, 41, project manager at University Health Network, and their children, Jack, 8, and Brierley, 5. 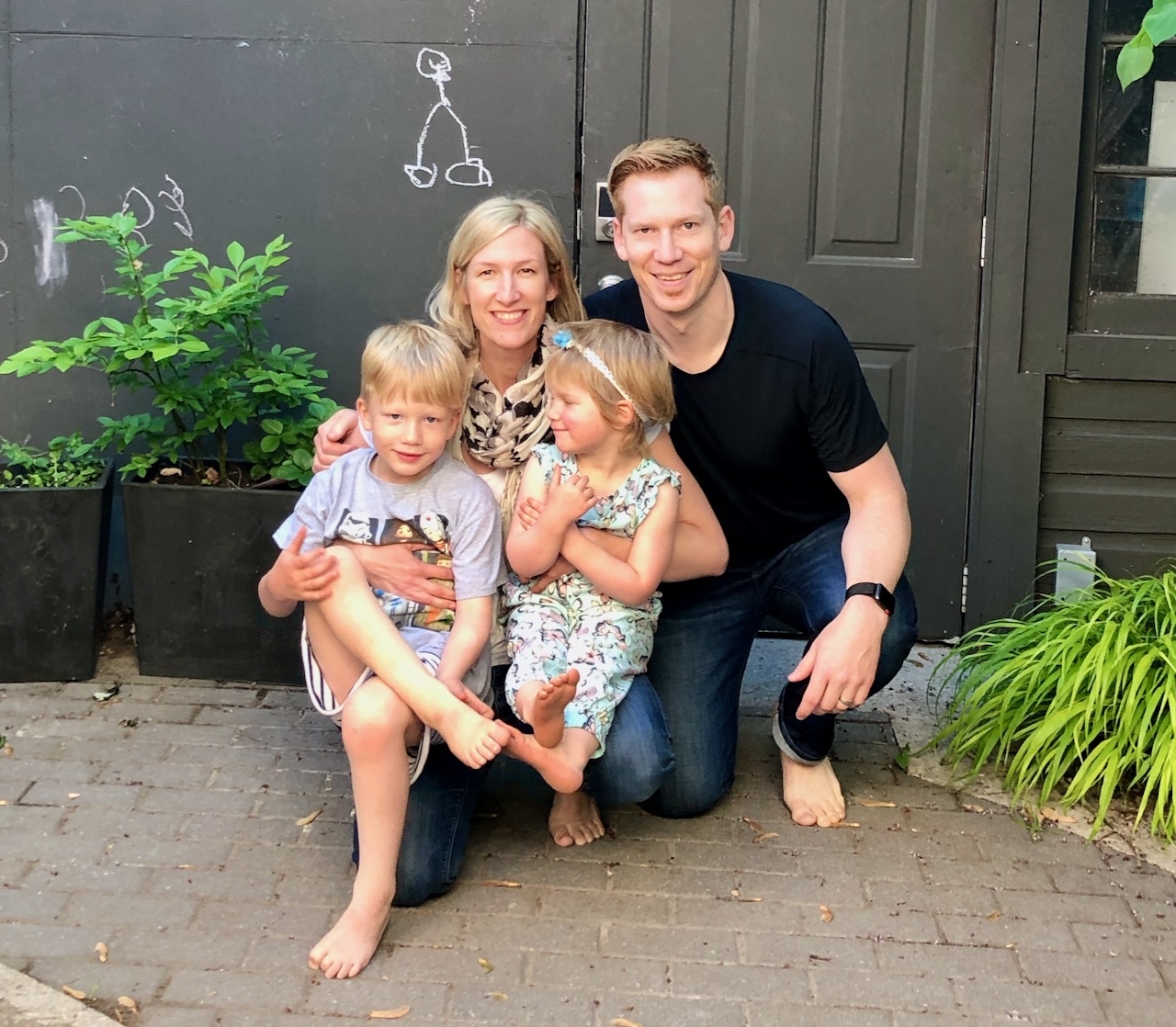 Craig: I grew up in Oakville and my family really liked to ski. We went to Mount St. Louis and Horseshoe on weekends. We also skied at Vermont and Mt. Tremblant a few times. When I was 16, I was really into skateboarding, so I ditched my skis and got into competitive snowboarding. After high school, I went to McMaster to study engineering. Joining the ski club seemed like an obvious move.

Jessica: I grew up in the suburbs of Kingston, with my parents and two siblings. We didn’t ski at all. After graduating high school I studied life sciences at McMaster. That’s where I met Craig, who was a year older than me. Actually, the first time I saw him was at Frosh Week, where he was promoting the Travel, Ski and Snowboard Club: they had him on a trampoline, strapped to his snowboard, doing tricks. I walked up just as he fell flat on his face trying to do something showy. It was fantastic. I knew he was special.

Craig: How did I recover from that? I guess I got the sympathy vote. The first time we really spent time together was when I took her snowboarding at Glen Eden. It was her first time on the hill, but we hiked up and strapped in. She was great. She didn’t give up. In 2000, I decided to take a year off university to see more of Canada.

Jessica: He had a green Ford Escort, which we packed up and drove across the country to British Columbia. We ended up living in Burnaby in this little basement apartment with no furniture, getting lost exploring the local mountains and going to Whistler all the time. He stayed out there and got a job with Telus while I went back for my second year. We continued dating long-distance until he came back.

Craig: I graduated in 2002 and started working as a hardware engineer at Research in Motion, which is now Blackberry. I didn’t really like it, so I started my own business instead, doing waste management in Port Carling. Jess finished her undergraduate degree and decided to try teaching English in Japan. She loves to travel and wanted to try something different. She liked it so much that when she got back to Canada, she went to teachers’ college at Queens. Then she would drive five hours to come visit me in Port Carling and collect garbage. It was romantic. In 2006, I sold the business and started a product manager job with Telus’s wireless team in Toronto. I rented a 500-square-foot, two-bedroom apartment in the Beaches for $1,200 a month. Jessica came and joined me, not long after getting her teaching degree.

Jessica: I got a job as an education coordinator at Toronto Rehab after finishing teachers’ college, helping to support the educators who teach doctors and nurses on placements. We loved the Beaches, but the place was tiny. We ended up spending a lot of time in Leslieville because we liked the restaurants and there was more stuff happening. Then, in late 2008, we found a two-storey, 18th-century house at Dundas and Pape. It was right at the start of the financial crisis: there were no buyers, and motivated sellers still had to offload their houses. We lucked out and got the house for $505,000, significantly under asking.

Craig: Two years later, I proposed. We got married a few months later in a 130-person ceremony at Jessica’s parents’ place near Westport.

Jessica: Craig and his dad are really handy, so we’d been renovating the Leslieville house from the start. But, in 2012, I got pregnant with our son, Jack, and suddenly we needed more space, so we added a basement. That cost about $100,000. Then, in 2015, we had our daughter, Brierley, and decided to add a bedroom on the third floor. That cost a similar amount. The Leslieville house was a great place to raise our kids, because there’s a park with play equipment nearby, where we could spend most our afternoons and weekends.

Craig: As the kids got older, we started taking them out skiing—Jack when he was about four, Brierley when she was two. We would mostly stay in Airbnbs and ski at Blue Mountain, because it’s got a water park that the kids really love. We were actually up in Collingwood in a short-term rental for March Break this year when Covid hit. Since school was cancelled and we could work remotely, we decided to extend our stay for a month.

Jessica: When April rolled around, we had to leave Collingwood because the place we were renting was booked by someone else. But we decided not to come back to Toronto, and moved to another rental on a 50-acre hobby farm near Epping, a tiny hamlet in Beaver Valley. We fell in love with it—the outdoors, the stars. I remember waking up in the morning, having a coffee and watching the hay being baled by a local farmer. The kids were screaming with joy. They spent all day every day outside. Jack had a little tractor that he rode around the paddocks on, and Brierley loved picking flowers and catching frogs. They were just thriving. That led us to thinking: how can we make this permanent?

Craig: We’d been renting Airbnbs and going up to Jess’s parents in Westport a lot, but that’s a 3.5 hour drive, even without traffic. We figured that if we got a secondary home, it would involve taking on an extra mortgage, but it was an asset that would appreciate over time. In May, we started doing research, just casually at first. We had a budget of $800,000 and wanted something with four bedrooms so friends and family could stay over. We saw four or five places in Beaver Valley.

Jessica: Then we saw a place listed for $744,900, just outside Markdale, a town of about 1,000 people a few minutes from Beaver Valley. It was a 2,500-square-foot, four-bed, three-bath brick farmhouse, built in 1890, with a beautiful English garden. Out back, it had the ruins of an old barn covered in ivy, with the foundation showing, surrounded by beautiful grass and flowers. The former owner, Ms. Brodie, left behind an incredible garden.

Craig: It was what you would expect of an old farmhouse. Lots of wood and plenty of whimsical wallpaper, which, despite its charm, didn’t align with the aesthetic that we were looking for. But we love a project. It was also important that it was only two minutes’ drive to the top of Beaver Valley Ski Club, which is less crowded than Blue Mountain and has a real family-friendly vibe. We wanted the kids to have that sense of community.

Jessica: We saw it on June 13 and made an offer of $732,000 the day after, knowing that others were coming to view the property. As expected, the owners declined, so we upped our bid to match the asking price, hoping to lock down the property and prevent a bidding war. They accepted and we exchanged contracts the next day, with a closing date of July 29. We moved in straight away and we’ve been living up here ever since.

Craig: I’m still commuting to Toronto, leaving here on Sunday night, staying at our place in Leslieville for a few days and coming back Thursday night. Because of the pandemic, the traffic isn’t that bad. It only takes me an hour and forty-five minutes.

Jessica: I’m working from home and looking after the kids, with some help from my sister, who lives full time in the Distillery District but has been coming to stay. It already seems like we’re painting 12 hours a day, just trying to brighten the place up. We spent $1,000 on off-white paint. That’s a lot of paint. I’m most excited about the stone ruins out the back, where I can picture putting up strings of fairy lights and having big outdoor meals. 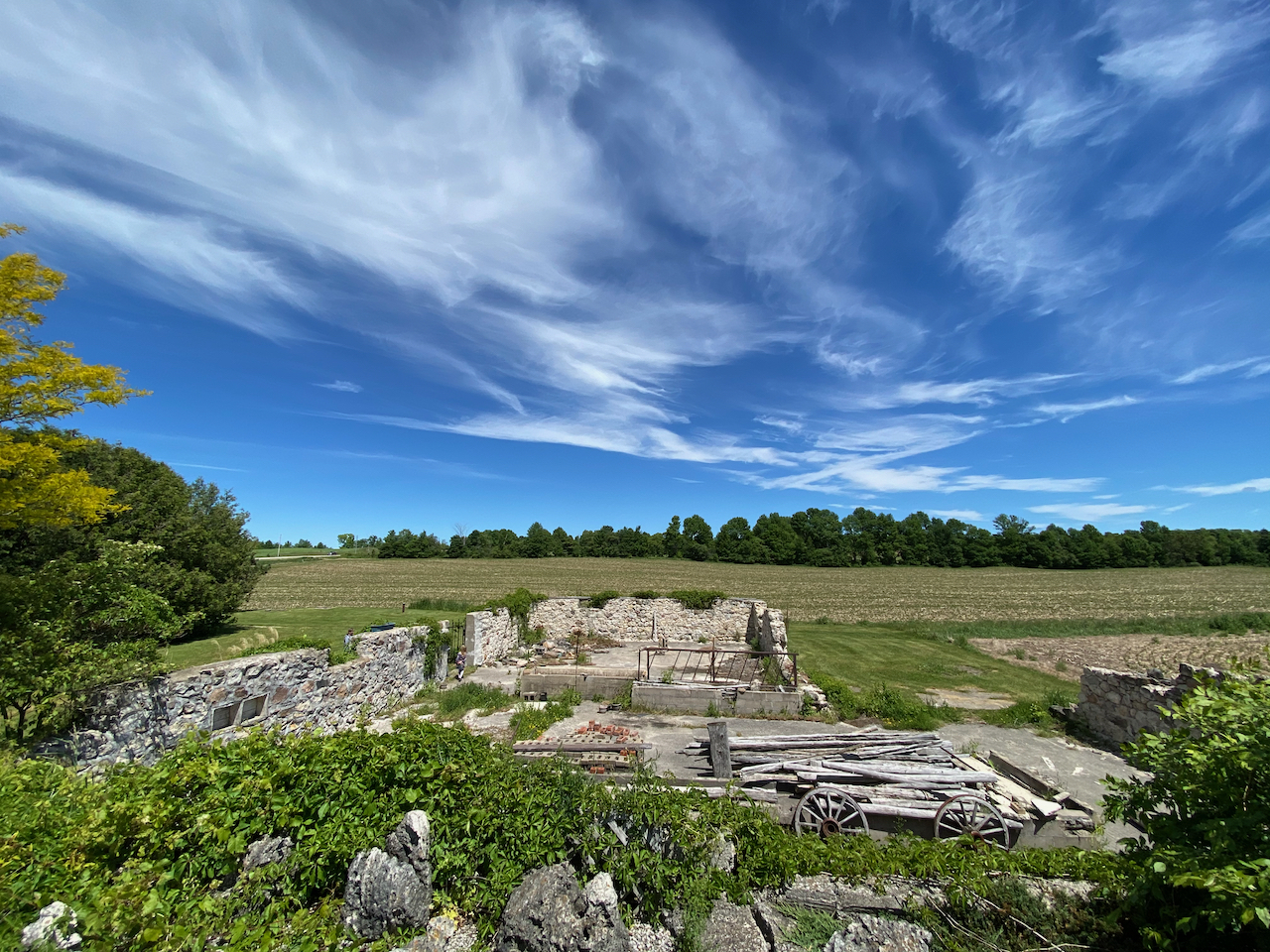 Craig: We also want to put in a barbecue area and an outdoor fireplace, plus a deck with a hot tub. There’s also a big basement that’s kind of empty right now, so eventually that might be converted into extra bedrooms for more people to come stay. I think that stuff will cost around $50,000. We want to be here for a year or so to get a feel for the place before doing anything more drastic. We’re really looking forward to the change of season and the start of winter. We already have a trial membership at the Beaver Valley Ski Club. The initiation fee is $17,000, but we’ve saved a lot of money by buying a place that isn’t right on the mountain.

Jessica: We plan to stay up here for the medium term. I’ll be working remotely until spring next year, so that’s not an issue. The kids aren’t going back to school. Instead, they’ll continue with distance learning. It works really well for them, and they’re getting a whole different type of education here. After that, who knows? The good thing is this place is really flexible. It could be our permanent residence. It could be a weekend residence or an Airbnb. In a way, it’s future-proofed like that.