A Toronto couple was expecting. So they ditched the city and bought this $715,000 home in Niagara

A Toronto couple was expecting. So they ditched the city and bought this $715,000 home in Niagara

The buy: A three-bed, two-bath home in Virgil, a small community just outside of Niagara-on-the-Lake.

The history: In 2016, Justin and Courtney moved into a one-bedroom condo in Moss Park, which they rented for $2,050 a month. They were both avid curlers and often played at the Leaside Curling Club. One afternoon, in the spring of 2017, they passed a sign for a condo being built across from the club. Courtney joked that they should buy a unit there so they could walk to the club. That idea stuck. The next day, Courtney researched the building online, and the couple decided to put in an offer. They purchased a two-bedroom, two-bath pre-sale unit with a parking spot, for $625,000.

In April 2018, upon its completion, Courtney and Justin moved into their new place in Leaside. They loved the slower pace of life in their new neighbourhood, and they were just a 15-minute Uber away from the downtown core if they wanted to go out for dinner. They still visited St. Lawrence Market every weekend and would often take walks on Bayview Avenue.

Justin and Courtney got married a few months later. By January 2020, the couple found out they were expecting. At first, they planned to stay at their Leaside condo until the baby could walk. But once Covid hit, the couple started working from home and stopped taking their weekend jaunts into the city. Suddenly, living in the city seemed less essential.

The hunt: The couple imagined moving somewhere outside of Toronto. Ideally, the place would have a community feel, with wineries, local boutiques and nice restaurants. In July, they ended up focusing their search in the Niagara region, where they could get far enough outside of the city to purchase a big property for less, while being within driving distance of Toronto if they ever needed to come in for work.

They set a budget of $800,000 and started looking. Justin wanted a newer turnkey home, while Courtney, eager for a project, wanted a fixer-upper with character. The couple found a happy medium with a three-bed, two-bath property in Virgil, a small community just a 10-minute drive outside of central Niagara-on-the-Lake.

The 10-year-old home was listed at $749,000. On the outside, it had blue vinyl siding and a sloped rooftop. Inside, at 1,770-square-feet across three storeys, it had more than twice as much space as their condo. Justin, the chef of the family, liked the big kitchen. And the unfinished basement would give Courtney her desired renovation project. 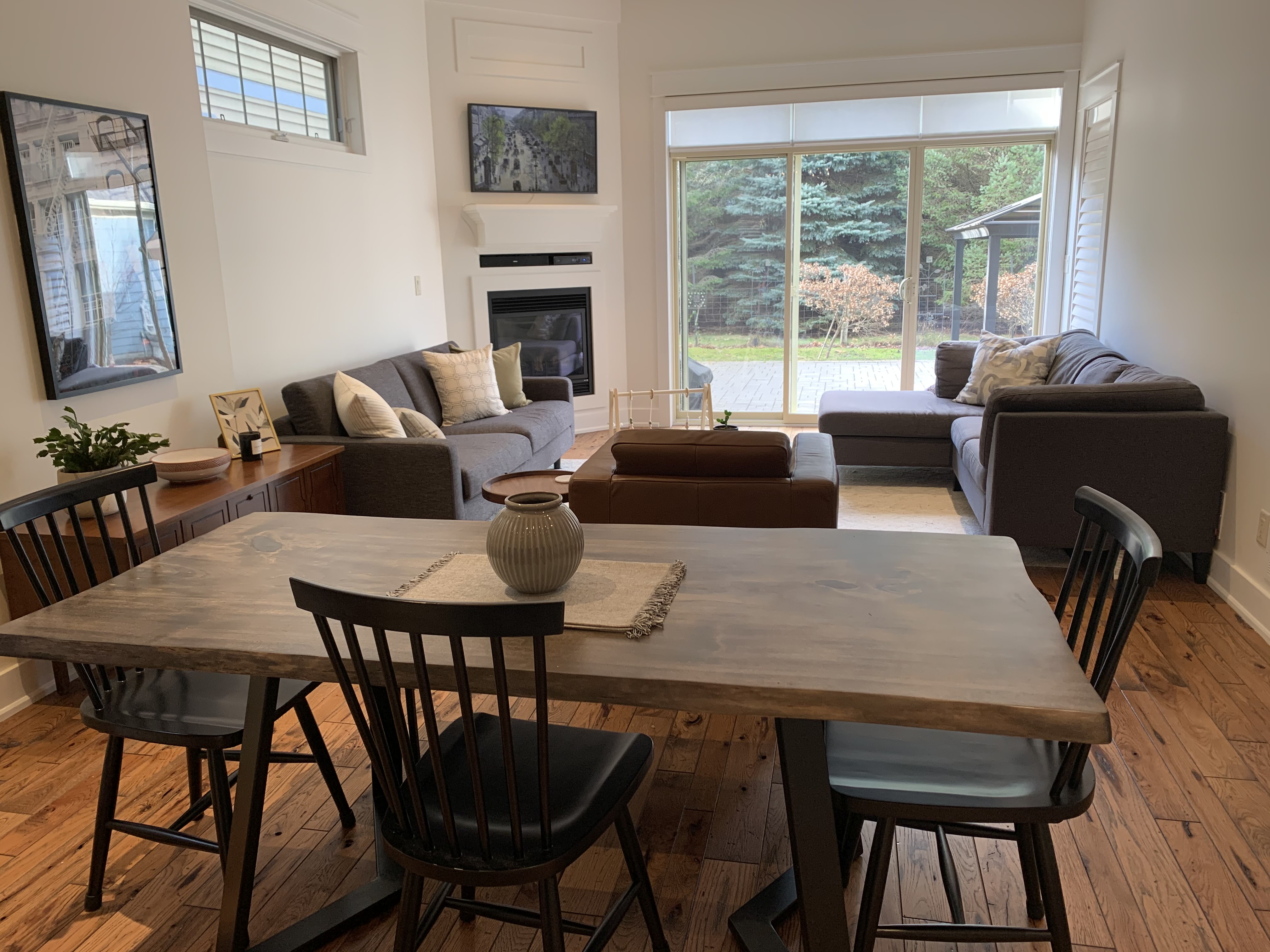 A couple of days after the viewing, on July 7, Courtney and Justin put in an offer for $710,000, based on the advice of their real estate agent. The owners countered with $715,000, which the couple accepted. At that point, Courtney was seven months pregnant. The couple set a 30-day closing date so they could get settled before Courtney delivered.

Then, on July 21, they listed their condo with a real estate brokerage called Properly. It sold a week later for $765,000.

The outcome: Justin and Courtney settled into their new home just in time for Pete’s arrival on September 26. Justin had three weeks off work, so the new family took advantage of their time together to explore the region and check out a few wineries and produce stands, with Pete nestled in the car seat.

Courtney felt sad to leave Toronto (she even cried when they took one last drive around the city before moving), but once Pete was born, the couple realized how difficult it would have been to manage in their two-bedroom Leaside condo with Justin working from home full time.

At their new place, Justin works in one of the spare upstairs bedrooms, which the couple converted into an office. That allows Courtney and Pete to play on the main floor, where they can make as much noise as they want. Once Courtney starts working again, she’ll set up another workspace next to Justin’s.

In February 2021, Justin and Courtney plan to renovate the basement, using the profits from their condo sale to fund the project. They’ll be adding a bedroom, a bathroom and a living area down there, where friends and family can stay when they come to visit. Courtney and Justin also started researching curling clubs in Niagara. They hope to get Pete into the sport when he’s old enough to play.