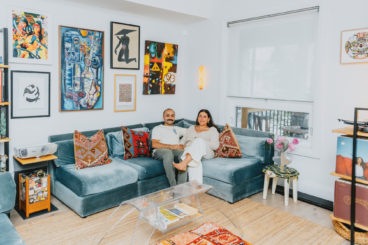 A maximalist makeover in Wallace Emerson

The People: Mehmet Shah, the director of finance at a tech company and Gabriella Nassief Borg, an interior decorator and founder, House of Borg

Where: A renovated three-bed, two-bath row house in Wallace Emerson

Gabriella and Mehmet bought their house in the spring of 2017. It came with a lot of sleek, generic finishes, like exposed bulbs hanging from brass rods and a manicured garden, but they’re allergic to the minimalist, cookie-cutter design that permeates so many Toronto homes. They like colour, personality, character, stuff with a story.

If that means their house is a perpetual work in progress, so be it. Gabriella believes that good design happens gradually, and she’s been fussing with the interior for the past four years—visiting local shops and vintage stores for one-of-a-kind finds and relishing the treasure hunt.

Now, their home is the de facto gathering spot for holiday meals with her extended family, whom Gabriella treats to homemade recipes from chef Yotam Ottolenghi’s cookbooks. Gabriella and Mehmet also rarely let a month go by without stopping at nearby Sugo for rosé rigatoni or Donna’s for potato tortillas with sour cream. In her spare time, Gabriella continues to source tchotchkes, furnishings and original art for the house. “It’s starting to feel right to me,” she says. “It’s not quite done, but it’s getting there.”

Gabriella and Mehmet watch movies on their living-room projector from this sectional that belonged to Gabriella’s parents and is still in its original form. “It’s fifty years old,” she says. “And it’s so comfortable you feel like you’re sitting in a puddle of cushions”: 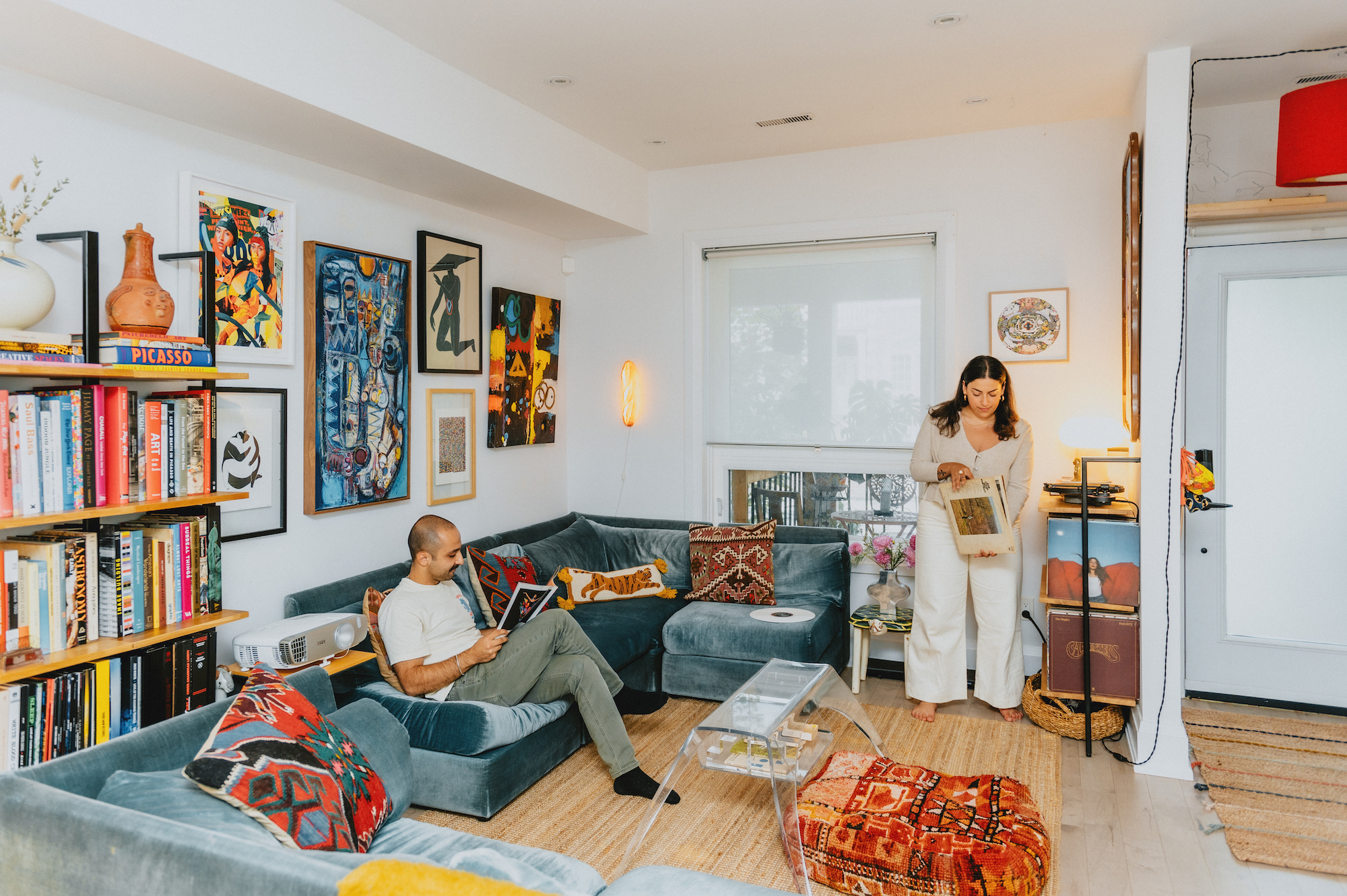 The Baguette Bread Lamp above the sectional is by Japanese designer Yukiko Morita. “It’s an actual piece of food encased in plastic, with a bulb on the inside,” Gabriella says: 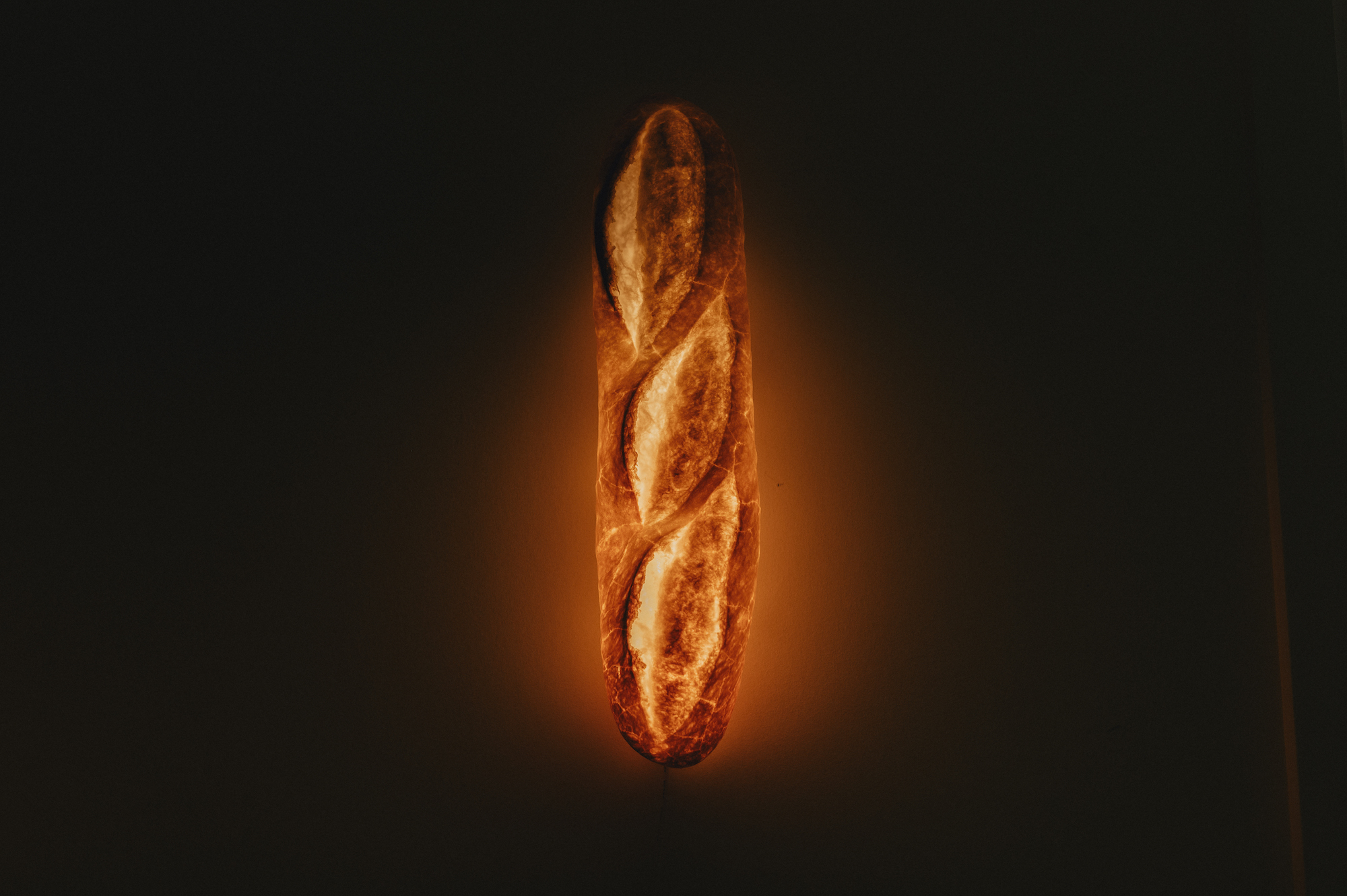 This piece is by Marcel Pinas, a painter from Suriname, her mother’s country of origin. “It was my first art acquisition, from when I was in university,” she says: 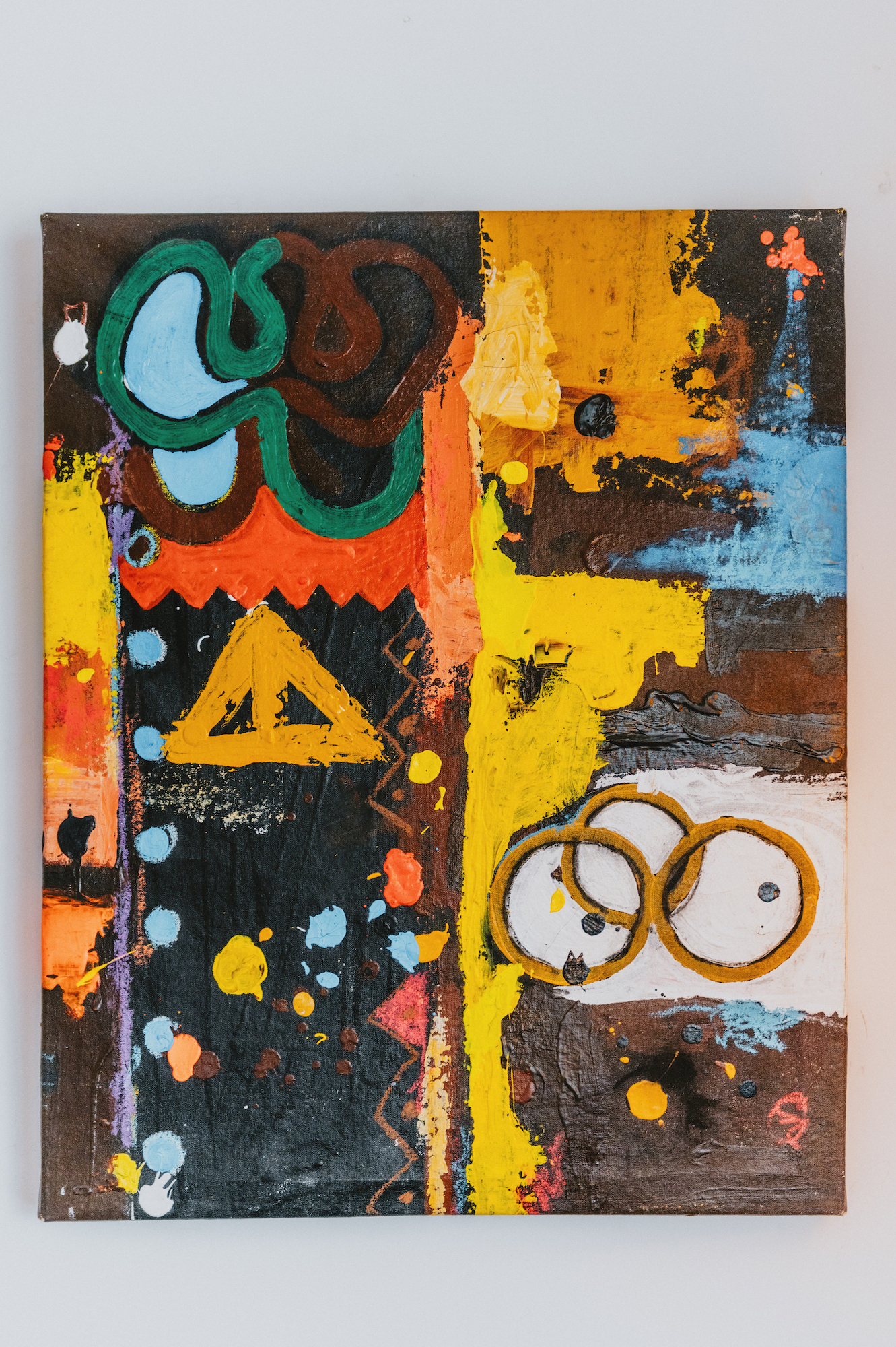 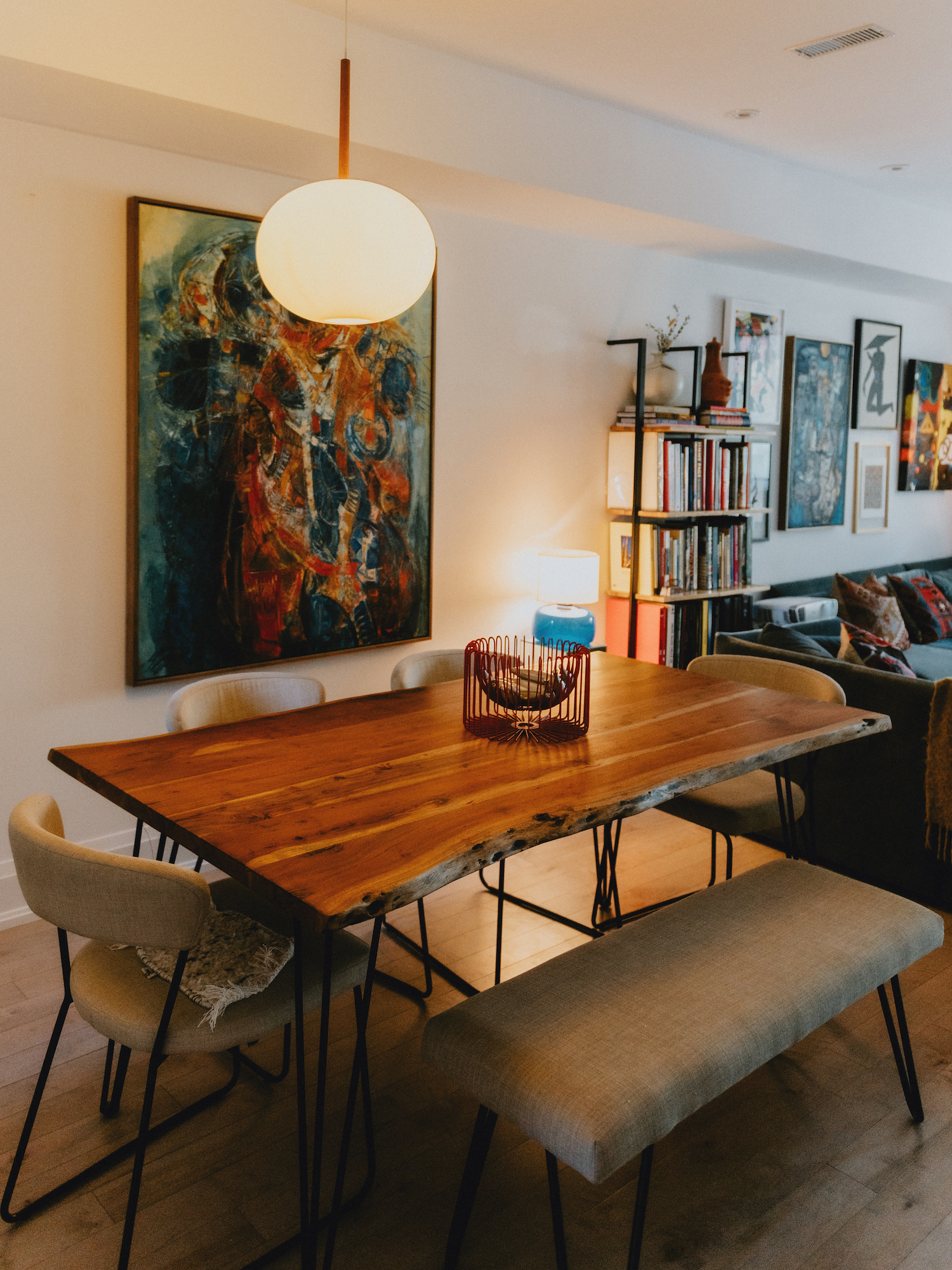 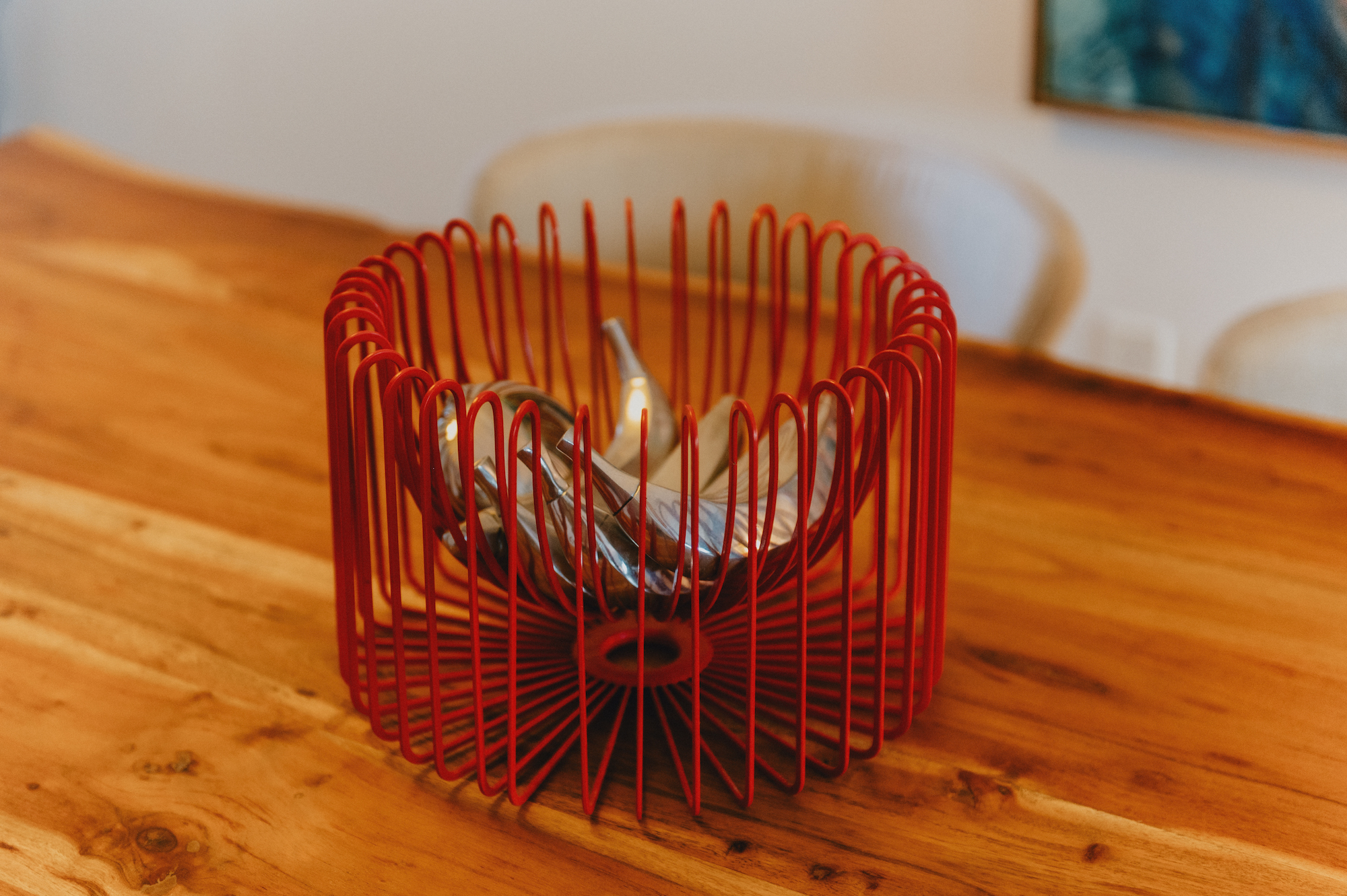 Gabriella’s paternal grandfather, an immigrant from Malta, drove across North America many times in the ’70s and ’80s, picking up matchbooks along the way. “I inherited his collection,” says Gabriella, “which was also a record of everywhere he’d been.” She displays some of her favourites in this shadow box: 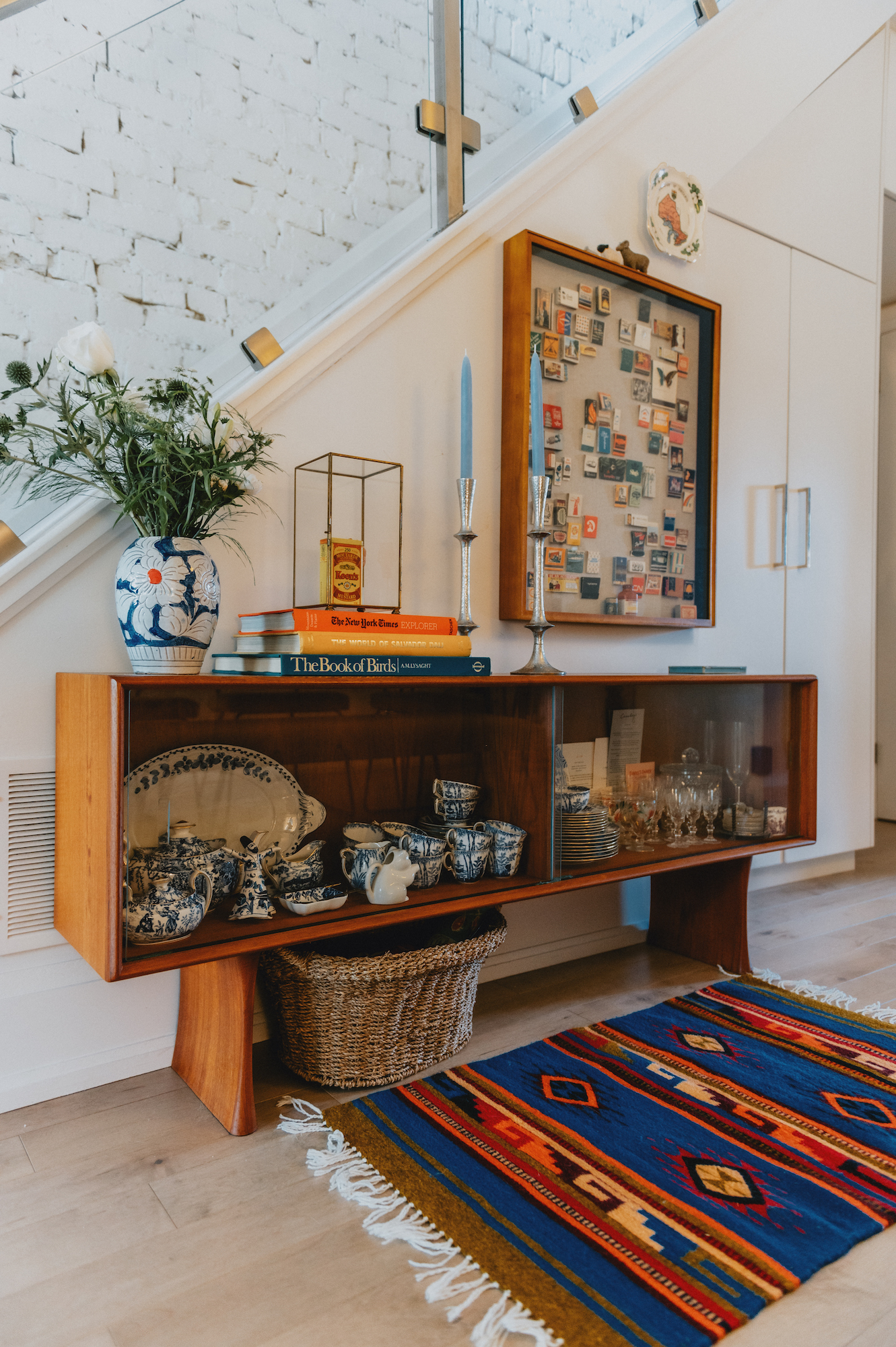 The rest of the matchbooks are in a bin across the room. The ceramic pot atop the bookshelf on the left was a gift from Gabriella’s father, who bought it from an Indigenous craftsperson in Suriname. The piece on the right is by Canadian ceramicist Kayo O’Young, which Gabriella found rummaging in Mrs. Huizenga, the vintage shop on Roncesvalles: 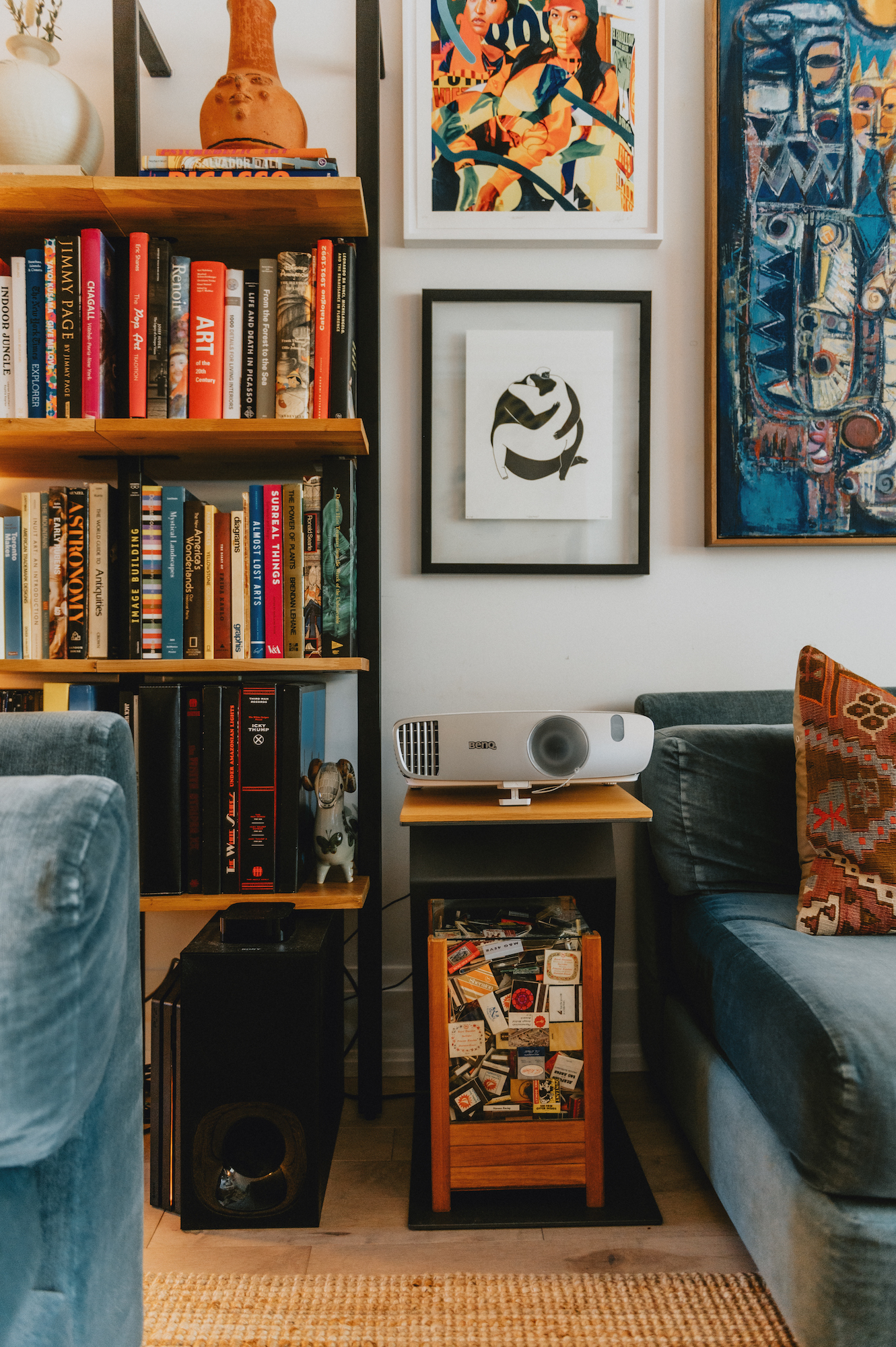 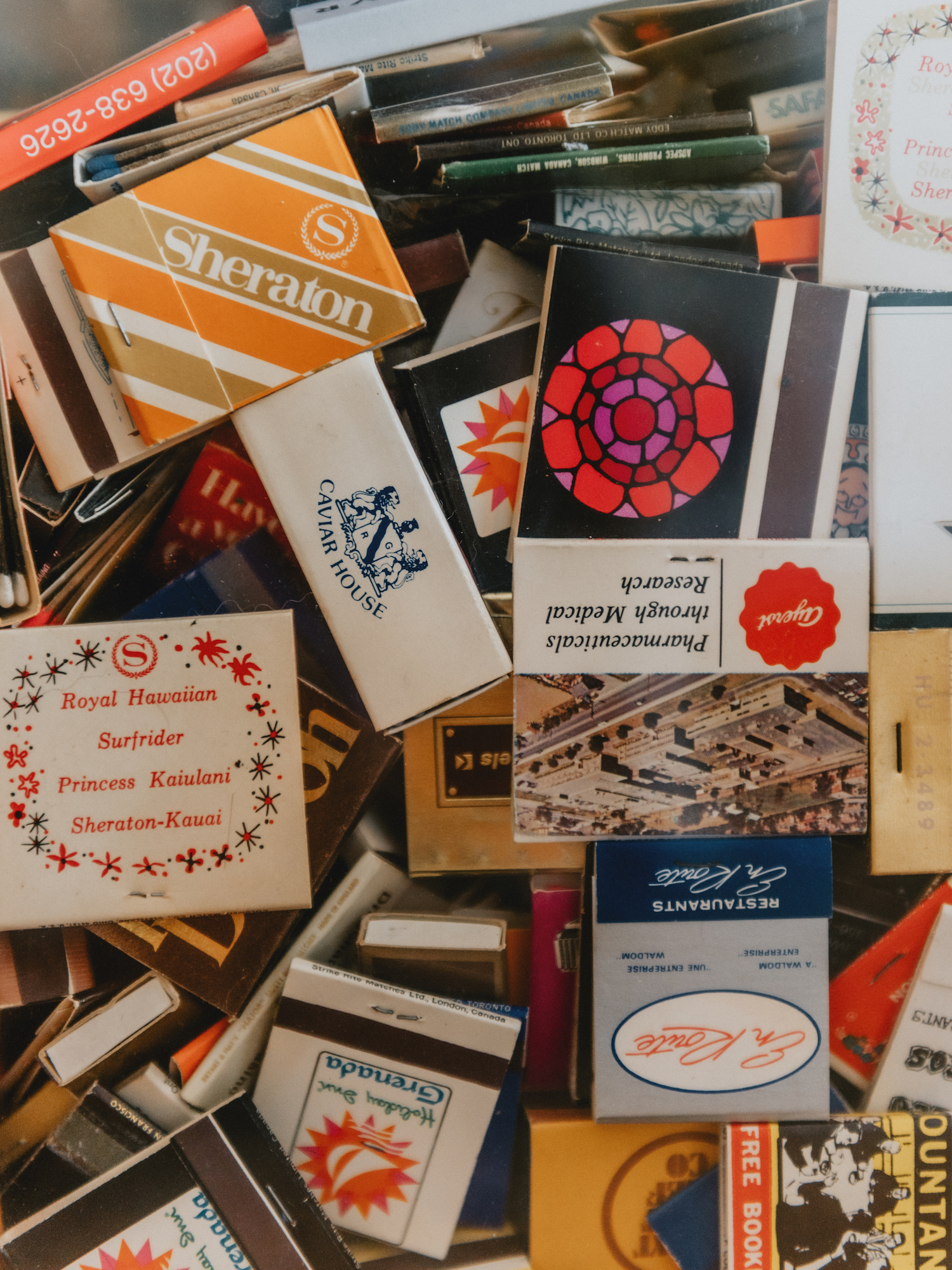 Here’s the powder room that came with an unfortunate wallpaper, which Gabriella and Mehmet removed to add a gallery wall: 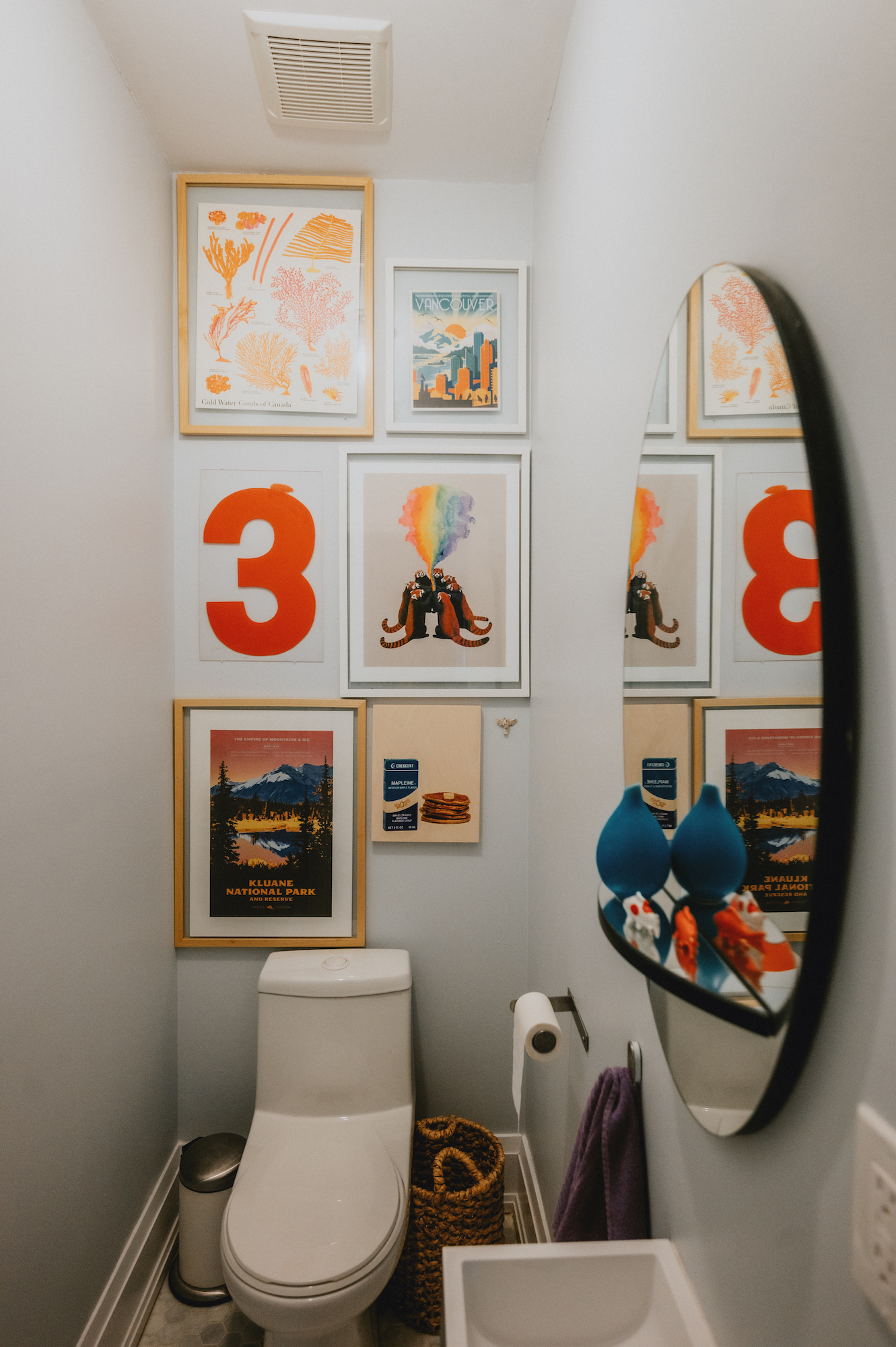 When Honest Ed’s closed in 2016, Gabriella was one of hundreds of people who waited outside to pick up a piece of Ed’s distinctive signage. “I have high school memories of taking the subway down to the store with my friends,” says Gabriella. “We’d try on ridiculous things. It was a way to kill time and feel like an adult”: 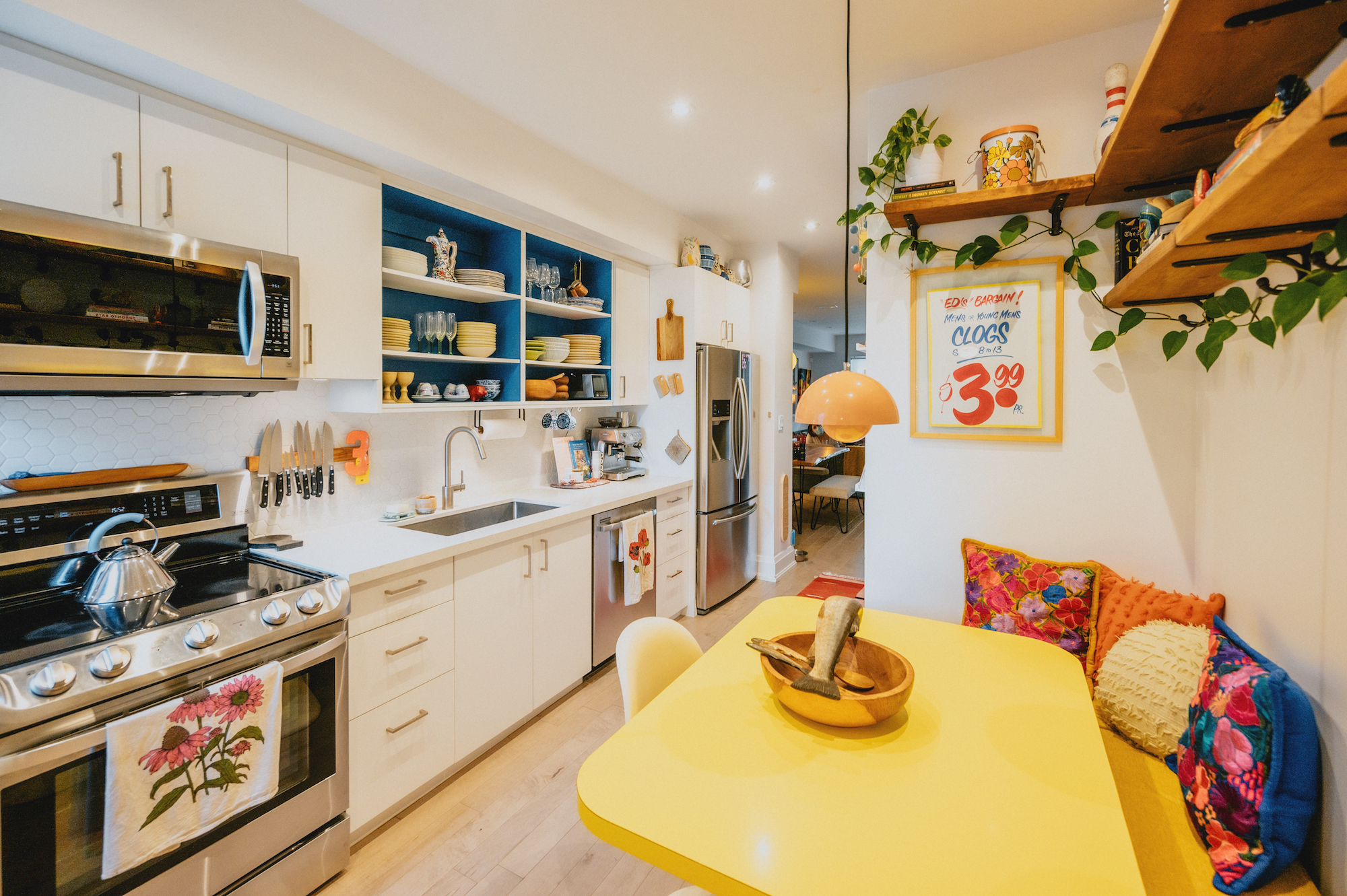 Gabriella and Mehmet opened the kitchen shelving—the better to see some of their prize finds, like the ceramic water pitcher from Cyprus and the set of Turkish coffee cups from a trip to Istanbul with Mehmet’s mother: 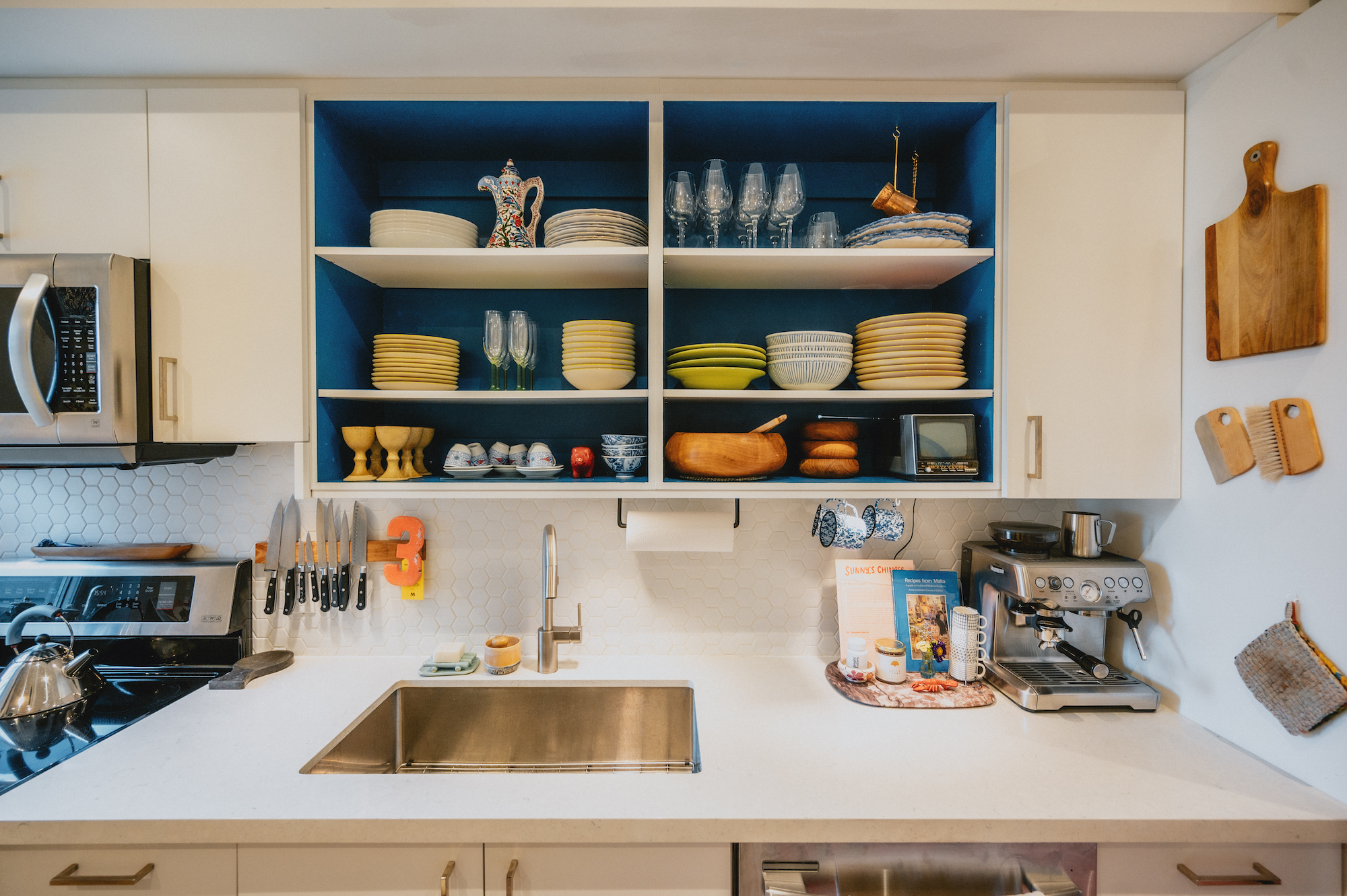 Gabriella loves weird curio-shop ephemera, but she also knows that a house full of random tchotchkes can feel cluttered. So, she consigns her strangest pieces—the chicken-shaped butter dish, the pop-art oversized sculpture of an Aspirin pill, the plastic watermelon that lights up—to a designated space above the breakfast nook: 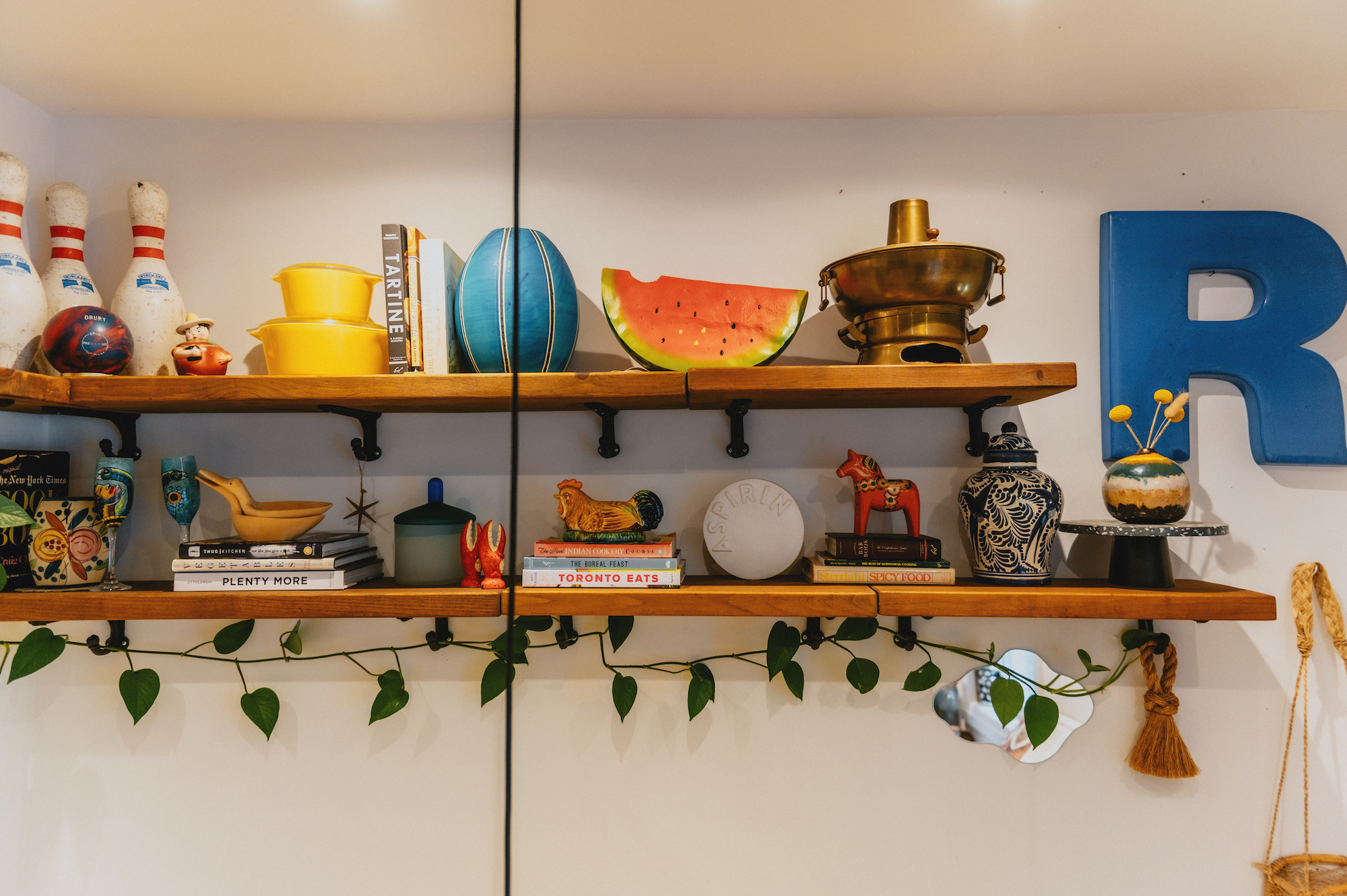 Gabriella purchased this tapestry by Chiaozza, the Brooklyn-based art duo Terri Chiao and Adam Frezza, at an IKEA art event in 2019. “We had it on the floor for some time,” she says, “but a white rug is a dangerous thing”: 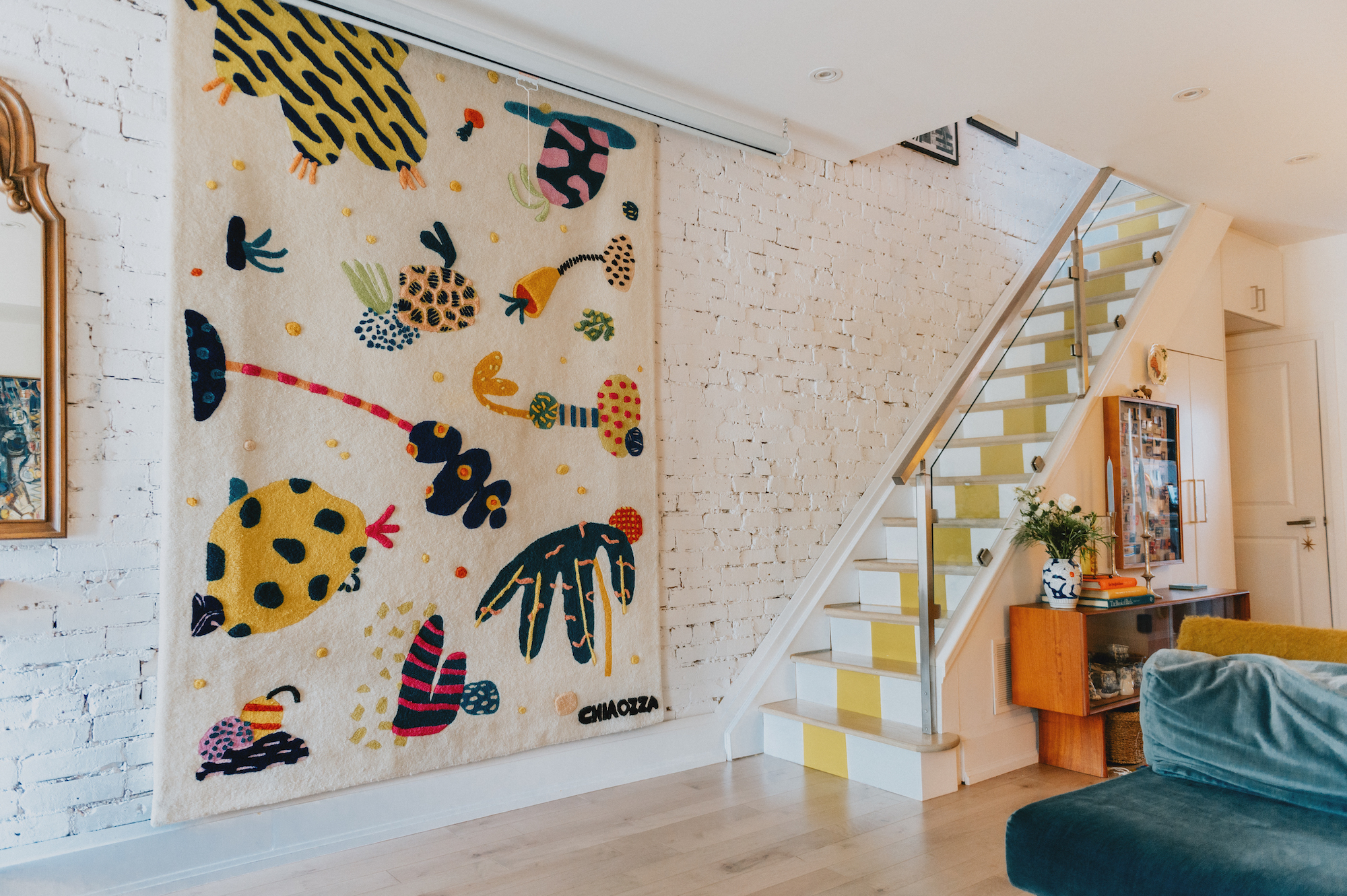 To enliven the main space, Gabriella painted a chartreuse stripe up the centre of the main stairway during the pandemic. “I wanted a colour that would work well with the changing daylight,” she says. “I used rulers and painter’s tape and just figured it out”: 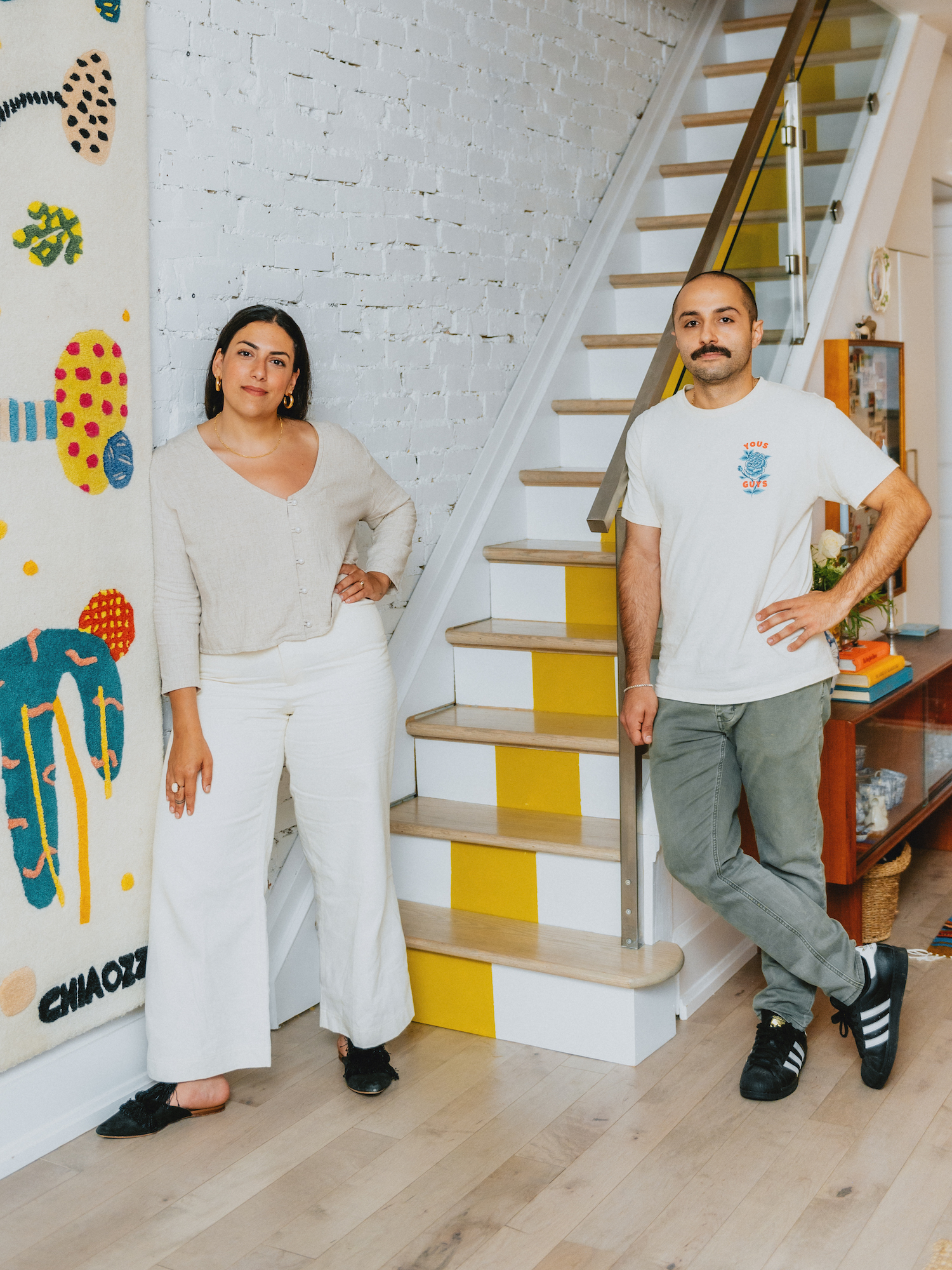 They also turned a spare bedroom into a joint office, and added lots of books and a few guitars: 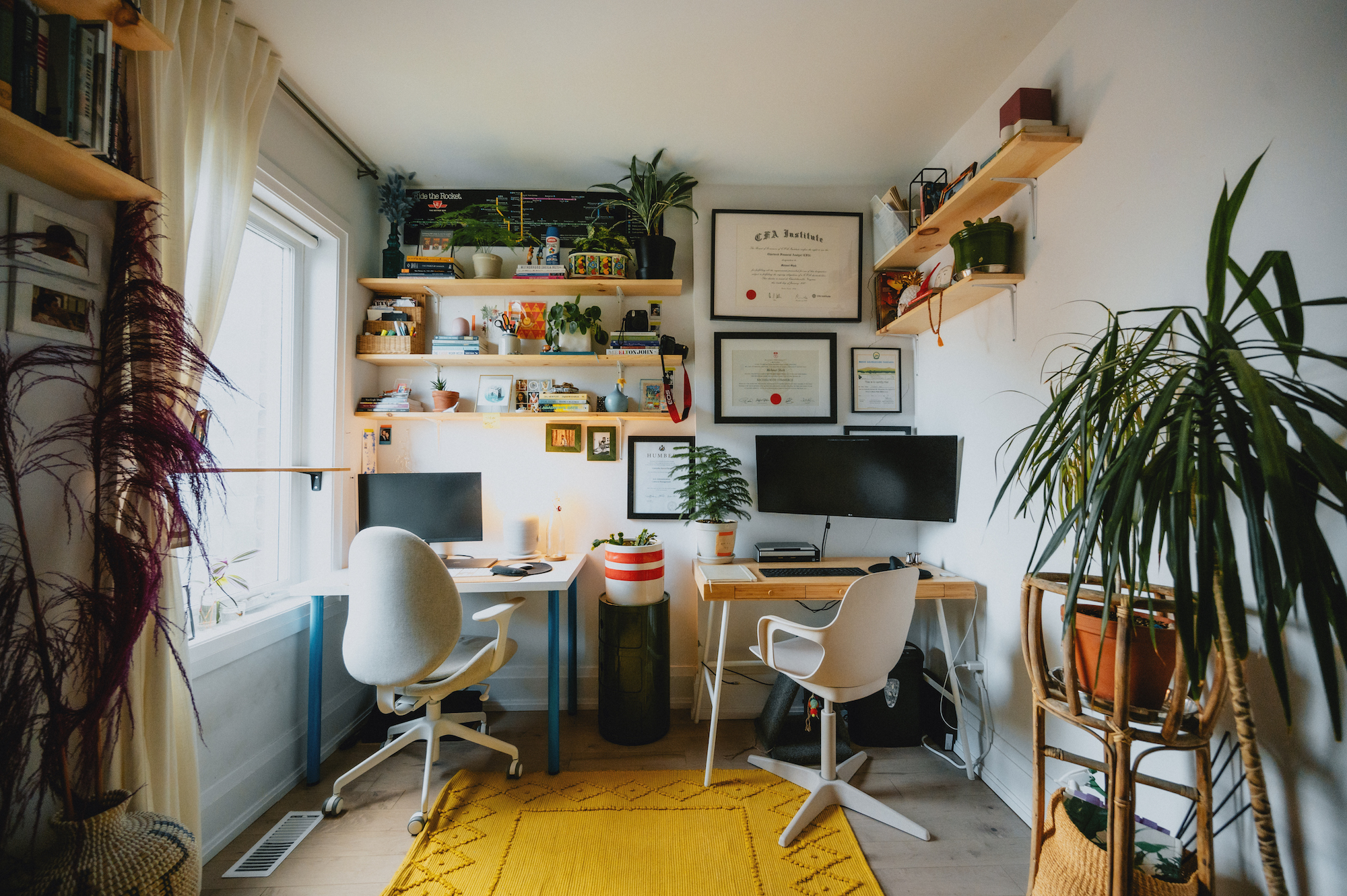 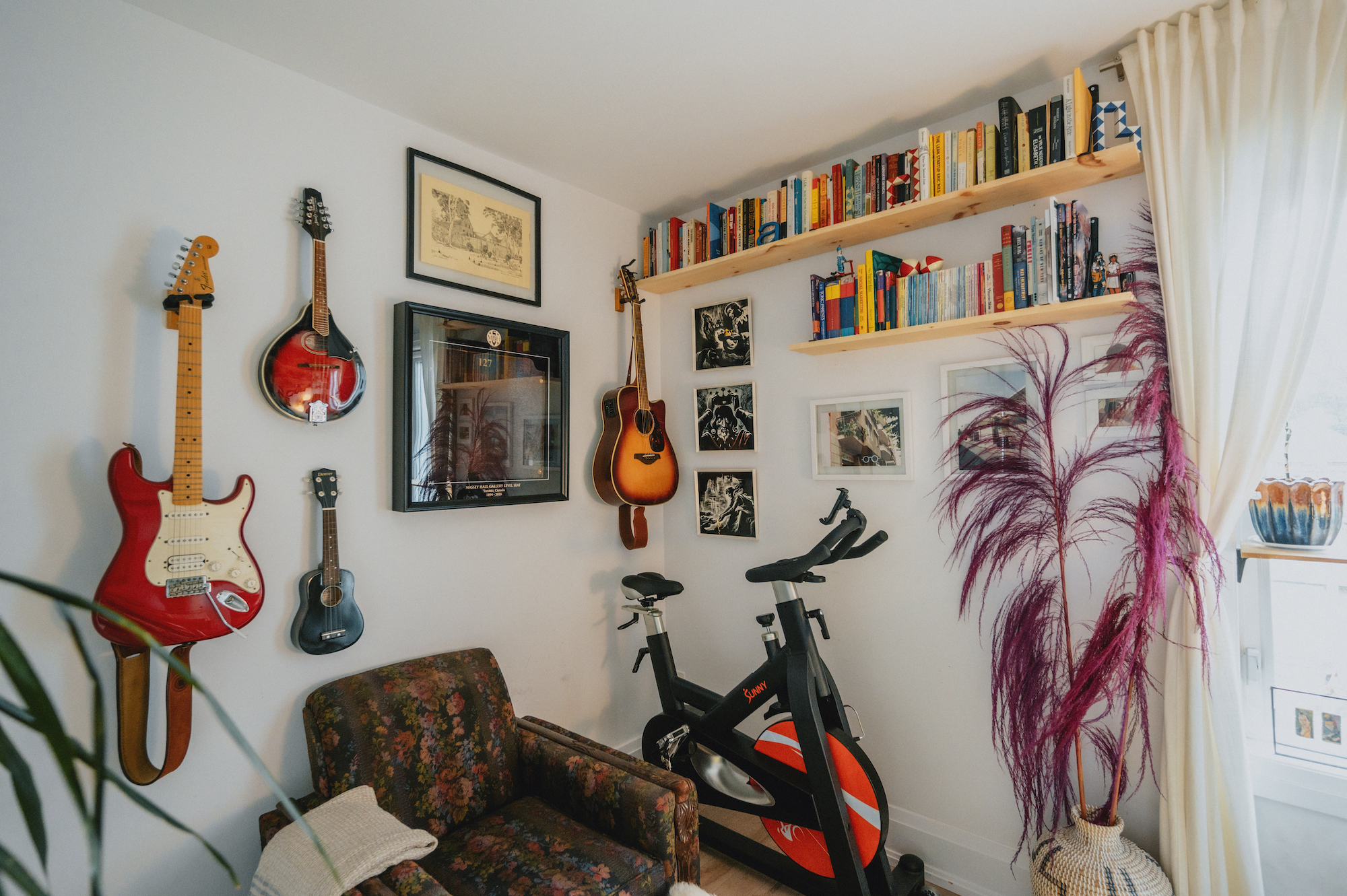 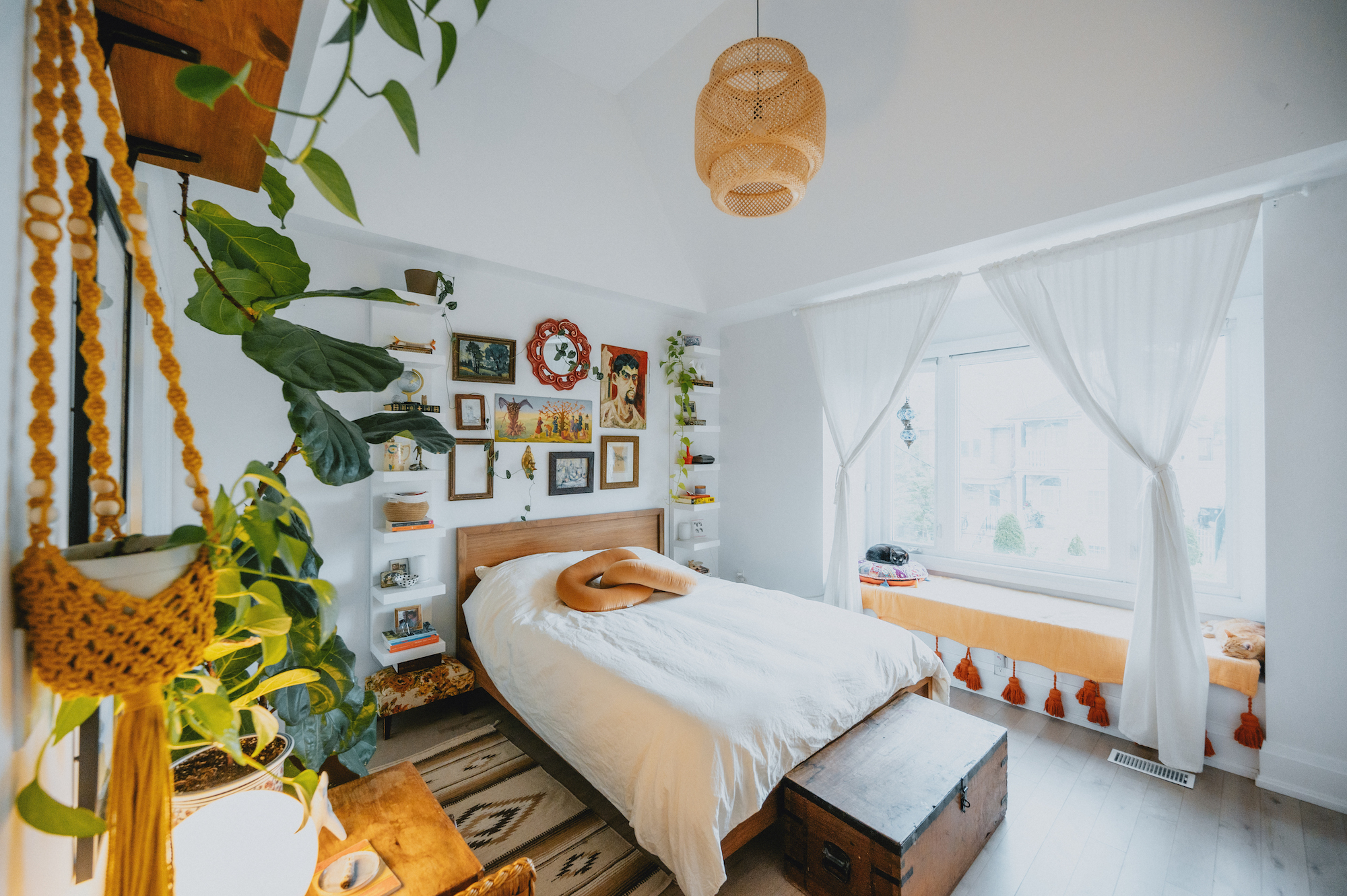 Gabriella acquired a collection of vintage globes—she displays six on a bright-blue acrylic plinth—via Facebook Marketplace. “The owner refused to sell them individually,” says Gabriella. “I liked knowing that I was buying from a fellow collector”: 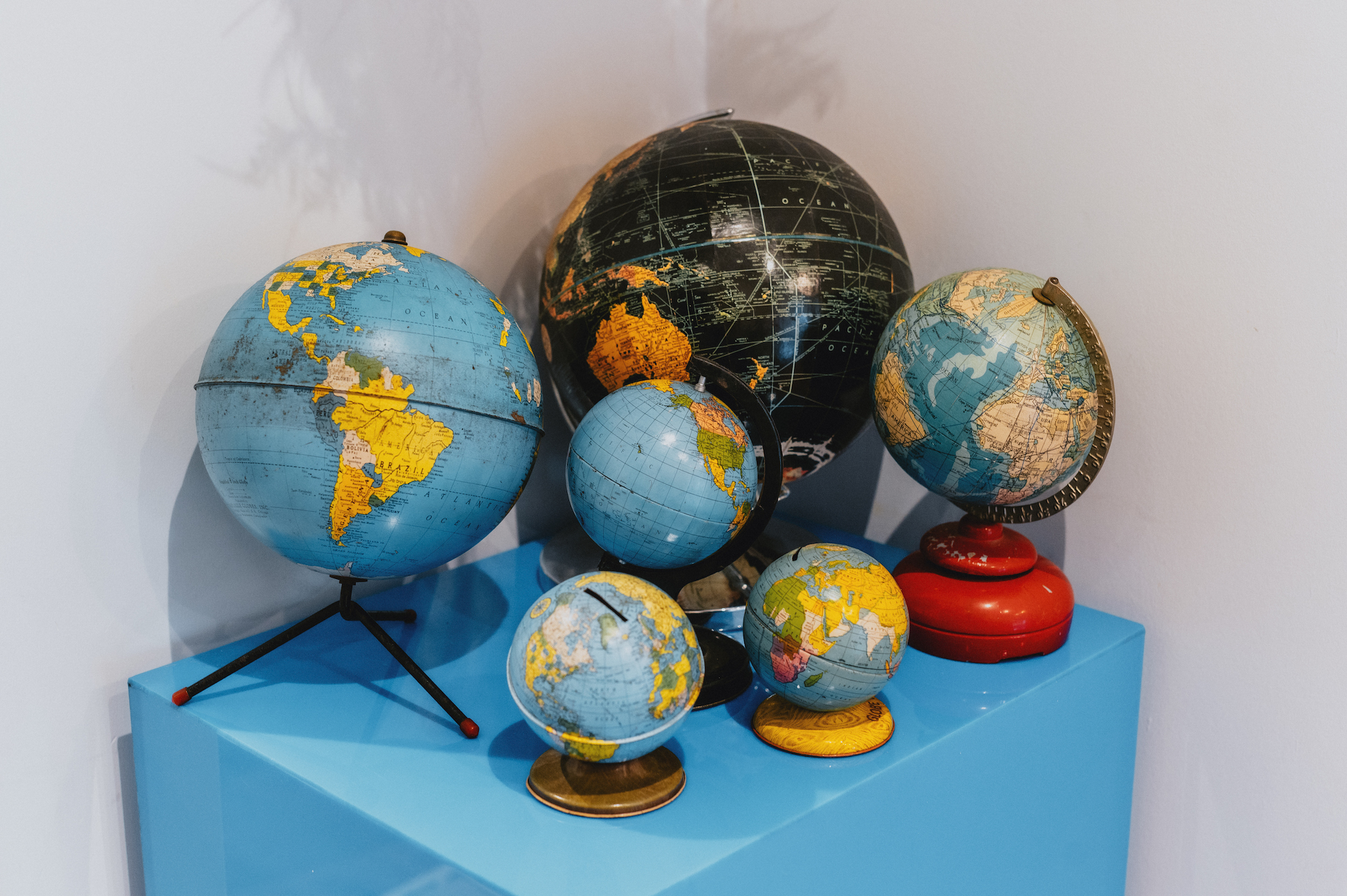 Here’s the back mudroom, which Gabriella and Mehmet use as a pantry: 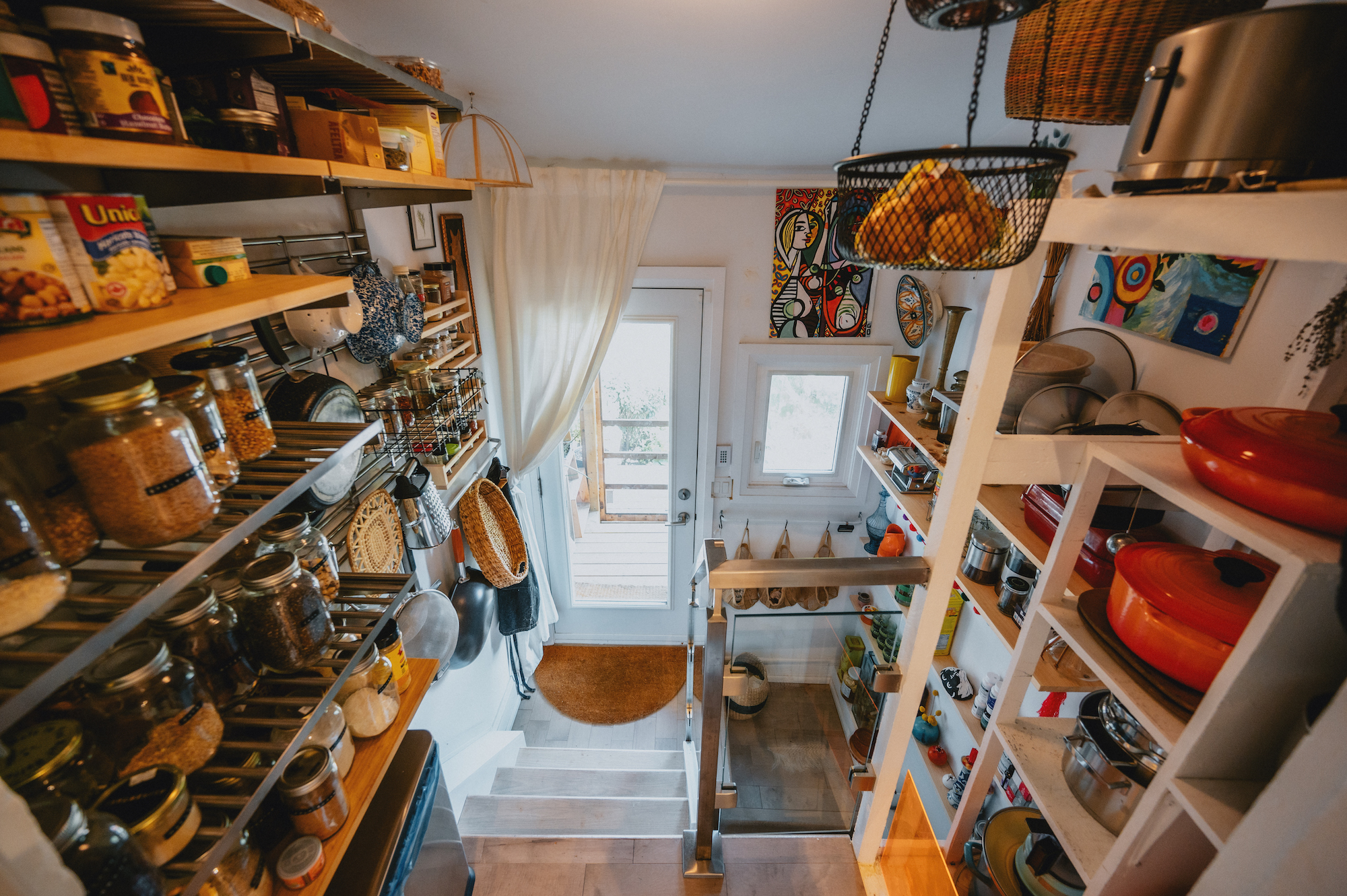 And here’s the yard. They have a vegetable patch where they grow tomatoes, peppers, kale, zucchini and eggplant. They also have a grapevine: 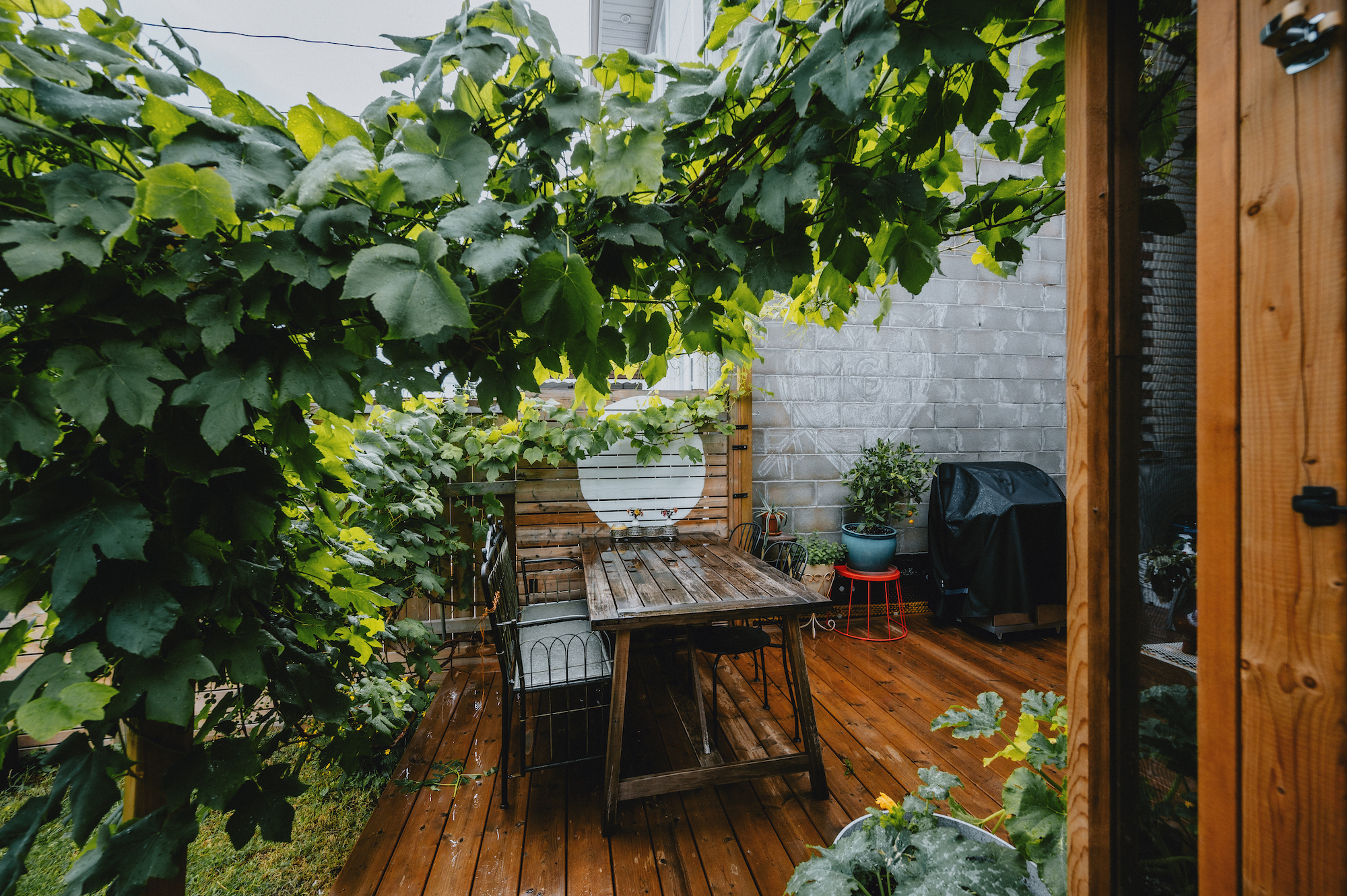