Ever since Toronto amalgmated in 1998, former municipalities have been hauling tranches of vintage photos to the Toronto Archives. Some of the old cities, like Scarborough, used to employ professional photographers to chronicle everything from Halloween parties to McDonald’s openings, while others submitted snaps taken by private citizens or newspaper photographers.

In these seemingly random photos, archivist Manda Vranic saw the makings of an exhibit about what it was like to live in the burgeoning suburbs of Toronto between the 1950s and 1980s. “I chose pictures that spoke to me, and what I was really interested in were people in the suburbs,” she says. “Things like community events, sports, kids taking ballet lessons, people getting together and living life.” The result is Wide Open World: A Celebration of the Suburbs in Toronto, a vivid new exhibition at the Archives that packs some neighbourhood nostalgia. We asked Vranic to tell us about some of her favourite images.

North York • May 1978
Vranic wanted the exhibit to focus on people rather than streets and buildings, and she chose this particular shot because she liked the joy on the girls’ faces. “It’s also just so evocative of its time and place,” she says. “You can see it’s 1978 from their socks and short shorts.” She knows it was taken somewhere in North York, but can’t pinpoint the exact location. “With the Hydro towers and the apartments, it’s a very suburban landscape.”

Scarborough • June 1950
This photo of a man in the living room of a Scarborough home was actually taken as an ad for a manufacturer of radiant heating tubes. “It is supposed to represent what your living room would look like if you bought their product,” says Vranic. “The fireplace, the TV, the couches—everything about the interior design here is really lovely.” Note the panther-like object on top of his fireplace—a common decor item back then. “A hot commodity in the ’50s, apparently.”

Queensway Park • 1959
The homes surrounding this Etobicoke park were constructed for returning servicemen after the war in the 1940s, and the park was created as an amenity. The area is completely different in layout and form from the more modern, grid-like suburbs that surround it. Vranic originally received the picture as a 35-millimetre slide within a protective casing. “When we removed it from the slide housing to scan it, behold, we found this Easter egg: another girl in the field, to the left,” she says. “I love the sense of open space in this picture.” 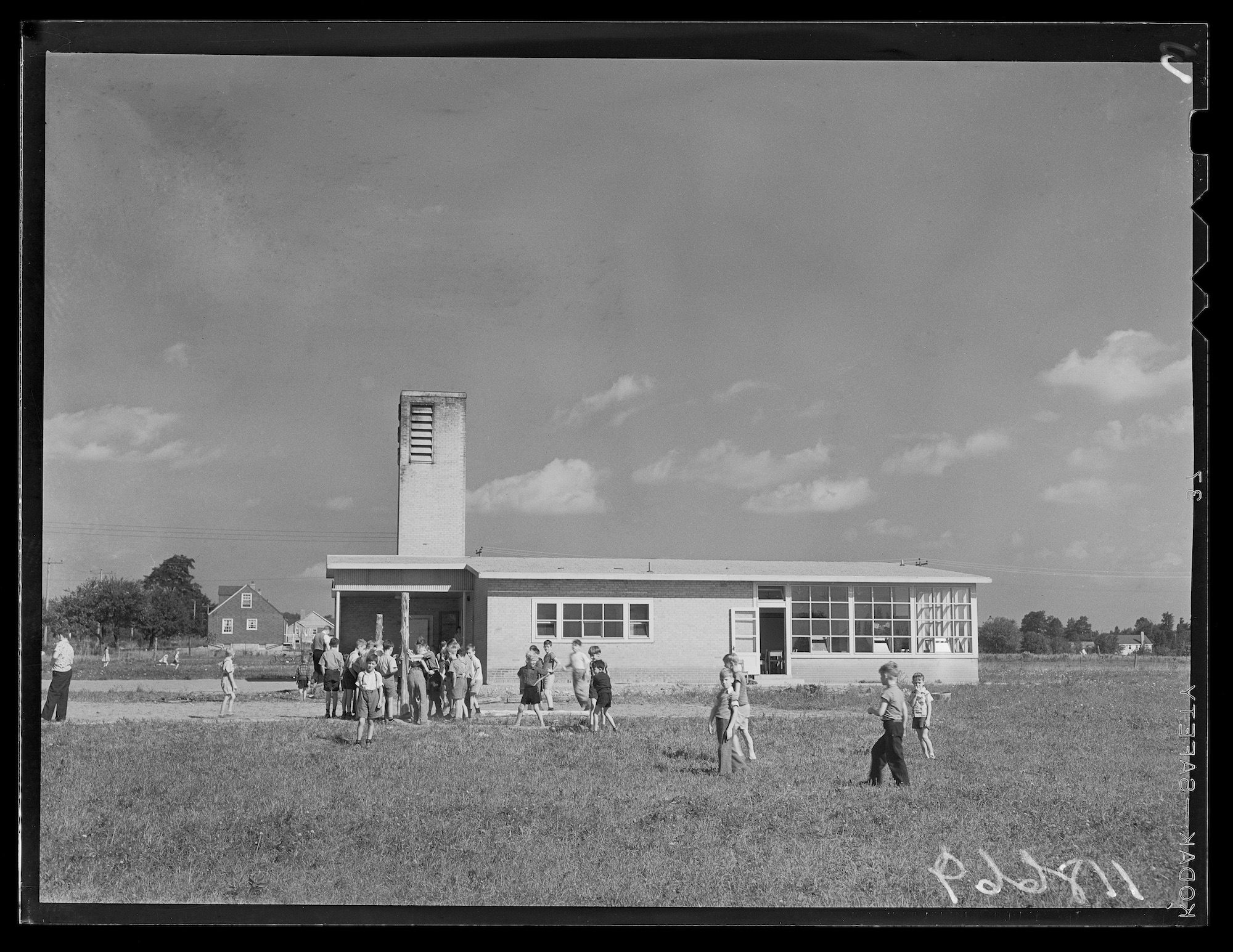 Centennial Road School • September 1947
This small school still stands in Scarborough, albeit surrounded by many extensions. Vranic recognized the spot because of the smoke stack, which remains to this day. “It was in the middle of a big, lonely field when it was first built in 1947, which was typical for many schools at that time in the suburbs of Toronto.”

Six Points Plaza • September 1957
In Etobicoke, where Dundas, Bloor and Kipling intersect in a six-pointed star, this strip mall still stands. “The photographer called this shot Six Pointers point at Six Points, which is cute,” says Vranic. “I love these girls. It’s so evocative of 1950s lifestyle in the suburbs, when these strip malls were all the rage.”

North York • January 1975
“This is about as iconic suburban Canadiana as it gets,” says Vranic. “Outdoor playing was so central to the experience of growing up in the suburbs.” Like other photos, this one didn’t come with an exact location. “I had to do some detective sleuthing, using landscapes, Google Maps and conversations with people from the area to try and figure out where they were.”

Mel Lastman Square • June 1989
This is part of what Vranic calls the “deleted scenes” collection. “I had to really pare down, and some photos were just a little too weird to be part of the main exhibit,” she says. This shot of runner and mascots was taken during the opening of Mel Lastman Square in North York in 1989. “There is something universal that we can all relate to about sad-looking mascots standing in the rain, you know?”