“We’ve been mostly sold out since Labour Day”: How the owners of The June Motel opened up a new boutique inn during the pandemic

“We’ve been mostly sold out since Labour Day”: How the owners of The June Motel opened up a new boutique inn during the pandemic 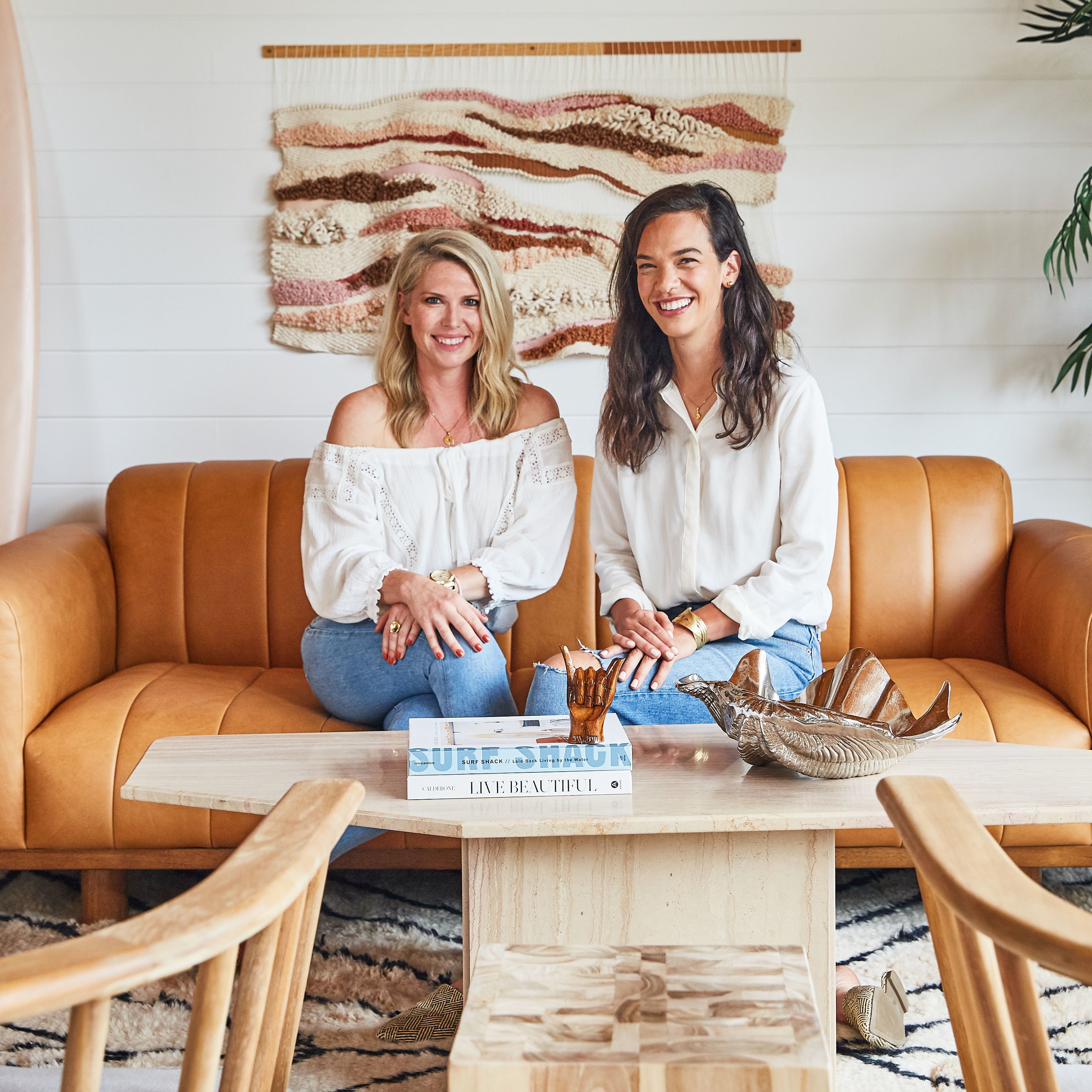 In 2016, Toronto friends Sarah Sklash and April Brown bought a run-down motel in Prince Edward County and turned it into The June Motel, a millennial weekend paradise. At the beginning of 2019, they closed on their second property, a larger 24-room motel in Sauble Beach with a restaurant and a pool, and planned to begin renovations in the fall. They were midway through when Covid hit and construction stopped. They missed most of the season, but got back to work this summer and opened up on Labour Day weekend. They’ve been nearly sold out since. Here’s what it’s like to open a hotel during a pandemic.

April: When we bought our first property in Prince Edward County—the Sportsman Motel, a hotspot for hunters and fishermen—we had zero experience in the hotel and design worlds. I was working for a marketing agency, and Sarah had a job with Service Ontario. But we shared a vision for a weekend getaway destination. We did most of the renovations ourselves, with the help of friends and family. We opened for the summer of 2017, and the place has been super-successful right from the beginning. People were hungry for a cool place to stay in the County.

Sarah: When our first season was over, we realized our passion is purchasing retro motels and transforming them. We weren’t ready to jump into anything else at that point, but we started casually looking at properties all over Ontario and Quebec. In summer 2018, we came to Sauble Beach because there was a motel there for sale. Neither of us had been there before, but we had a magical time. Everyone wanders around in flip-flops, and the beach is easily accessible from most parts of the town. There’s an arcade and ice cream shops galore—it feels like you’re transported back to childhood. 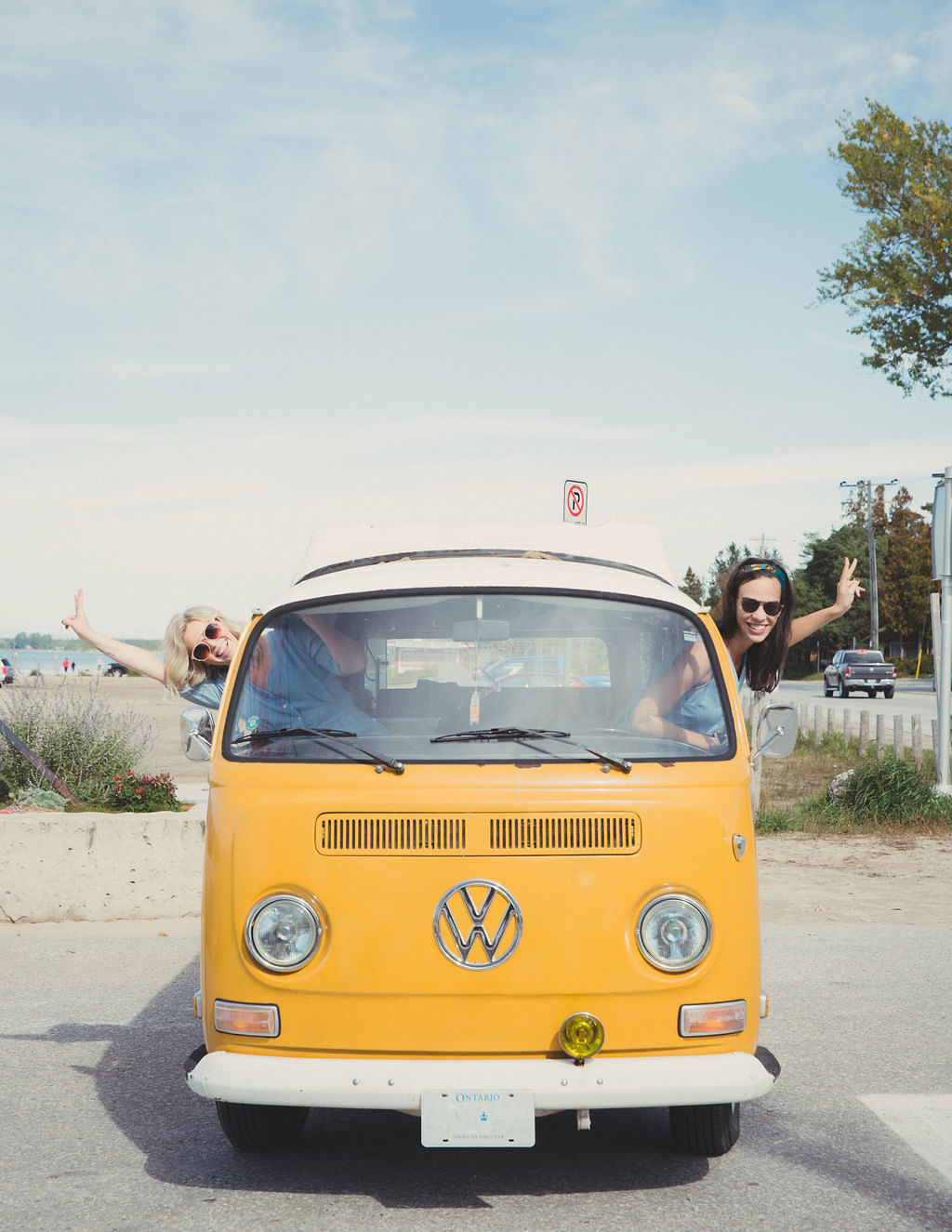 April: There’s all this nostalgia, but then there are these new trendy businesses, owned by young female entrepreneurs—like a Mexican place called Casero Taco Bus and the Wellness Refinery, which is a café and boutique. It was inspiring to picture ourselves as part of that community.

Sarah: Just like when we arrived in the County, Sauble Beach had that young entrepreneurial feeling of people doing cool things. We also knew that tourist destinations like Bruce Peninsula, the Grotto and Tobermory we all close by, and were attracting more and more visitors from Toronto. 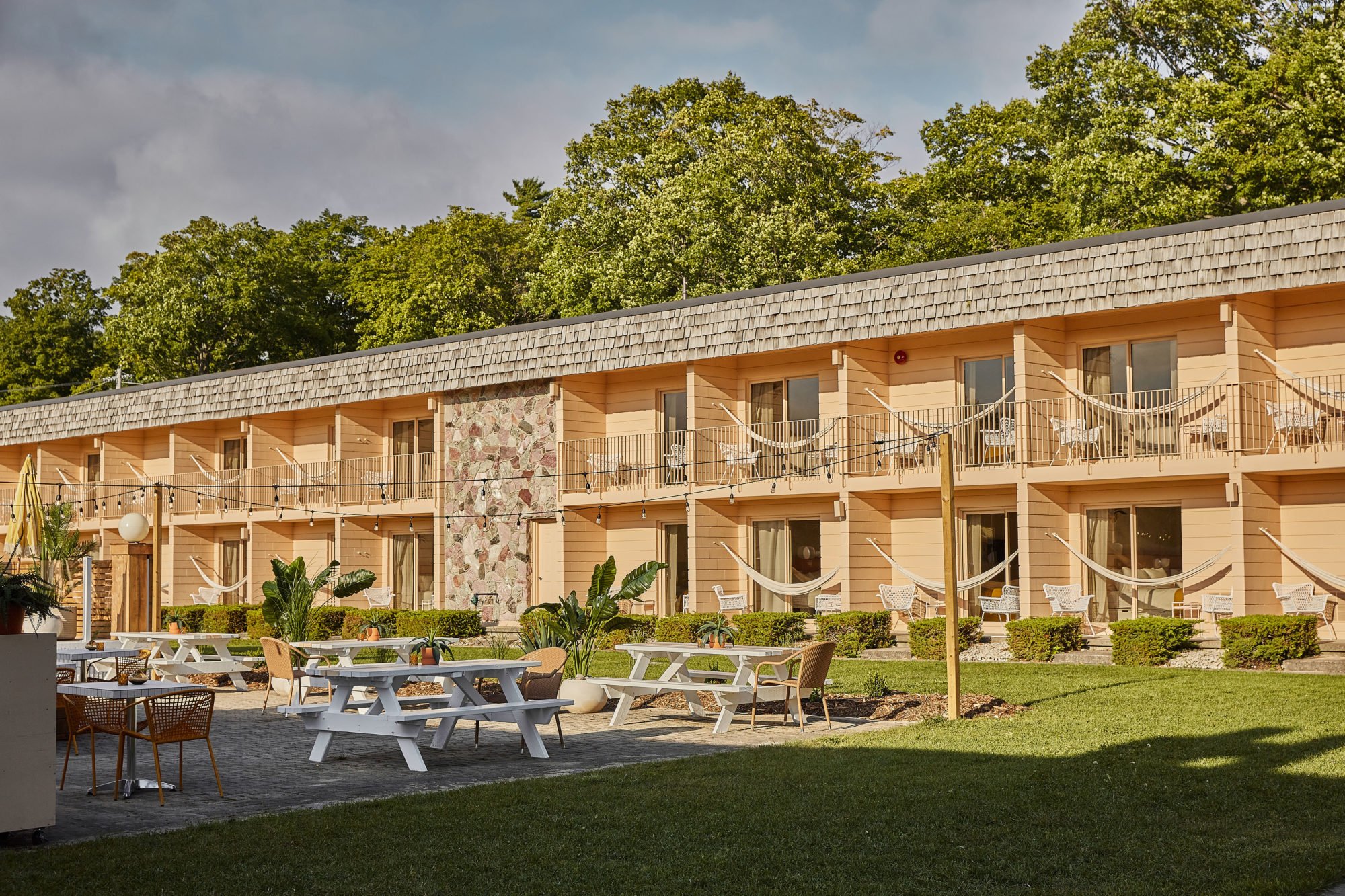 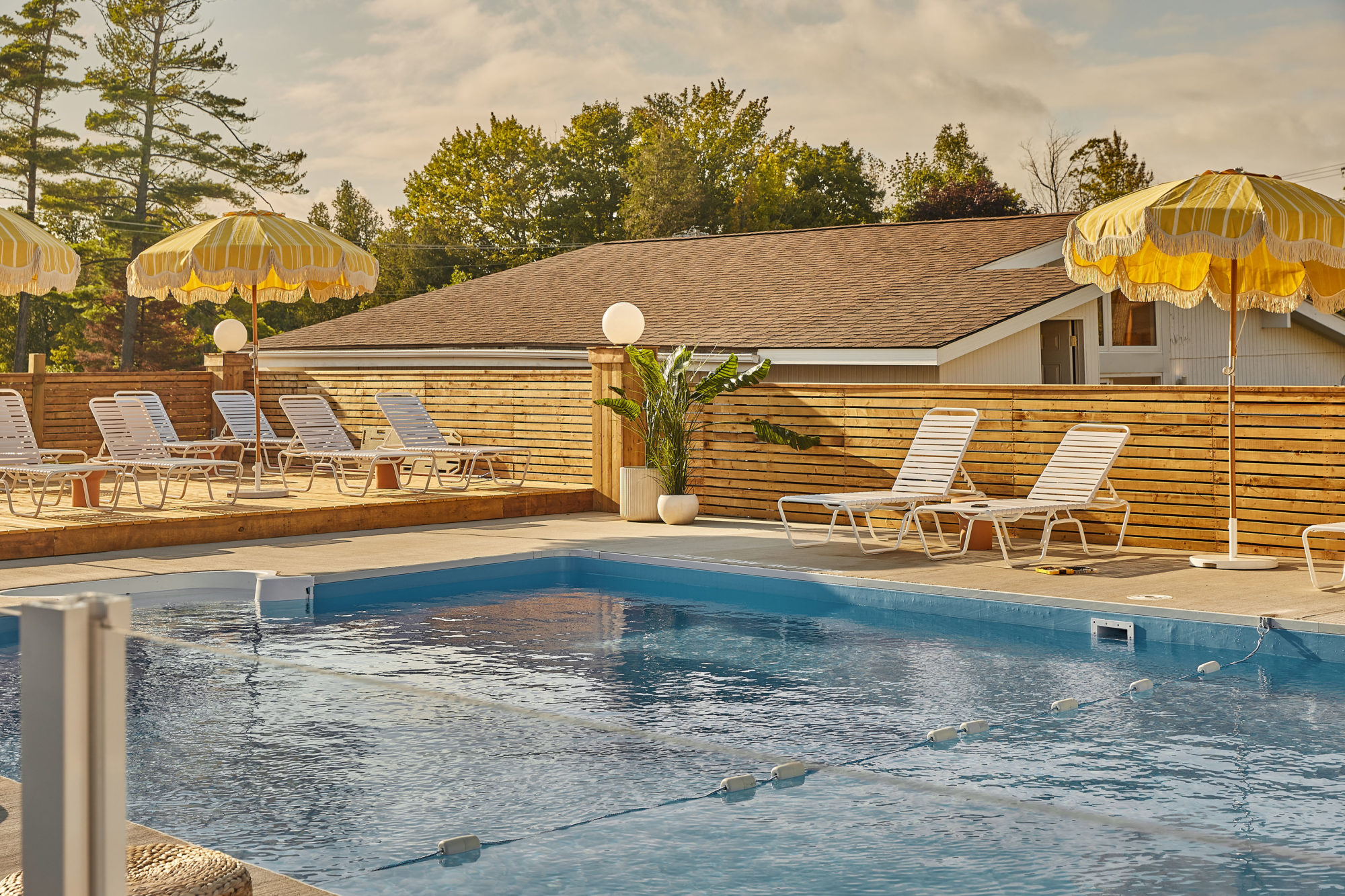 April: We had 16 rooms at our first location, and were sold out constantly. So we wanted something a little bigger, but not too overwhelming. The Knight’s Inn was a family destination built in the late ’70s and early ’80s, and there hadn’t been any updates since. It had great bones and a pool, but just needed fresh eyes and energy to bring it back to life. The restaurant that was there hadn’t been open for over a decade. But we were excited to enter the restaurant business.

It took us another six or seven months before we really committed and purchased the motel. We took possession in April 2019, and ran it as it was for that summer, officially starting re-design and renovations in the fall. We planned to gut all the bathrooms, add new flooring, paint and wallpaper everything and create new designs for all the rooms.

Sarah: Pre-Covid, our market was very much about the girls’ getaway and we focused on designing guestrooms that you’d want to share with your closest girlfriends. The motel originally had two double beds in each room, and we decided to upgrade them to two queen beds for this reason. But the region is also romantic destination, so we decided to add a few king-sized rooms.

Sauble Beach is a super-seasonal town and a lot of restaurants and hotels shut down after Thanksgiving, so our original plan was to open in the middle of June, to take advantage of the summer months.

April: When Covid hit, we were at the no-turning-back phase. We had donated all the old furniture, and had prototype rooms for the kings and doubles finished. The rest of the rooms were totally gutted but nowhere close to done. We were about to start on the restaurant. Every part of the property was under construction—which was all brought to a complete, screeching halt.

Sarah: We started thinking about our options. The first option was not opening as The June, because we didn’t know if we’d have the financial capital to keep going with the same vision we had pre-Covid. We also talked about not opening at all this year. We thought, if we can’t open in the best possible way, with an amazing launch party, then why open at all? The third option was to open as soon as possible to recoup some costs and modify everything for Covid. In the end, that’s what we did. But we still knew we would miss most of the summer season, based on how much more work there was to do once construction shut down.

April: We spent a lot of April and May figuring out new procedures for the County property that we could transfer to Sauble Beach. We now have contactless check-in with a text-message concierge and welcome guests with canned sparkling rosé in the room instead of a glass of wine.

Our cleaning processes were also re-worked. We had to budget for housekeeping staff to spend a lot more time sanitizing every touch point in the rooms. As with most hotels, we also stopped doing mid-stay cleans at both properties for the safety of our staff and guests. We instruct guests to text for contactless delivery of fresh towels and other amenity top-ups. Instead of having Nespresso machines and wine glasses in the rooms, we moved to contactless delivery of wine and wine glasses when requested and offer complimentary coffee and tea in a communal shop. 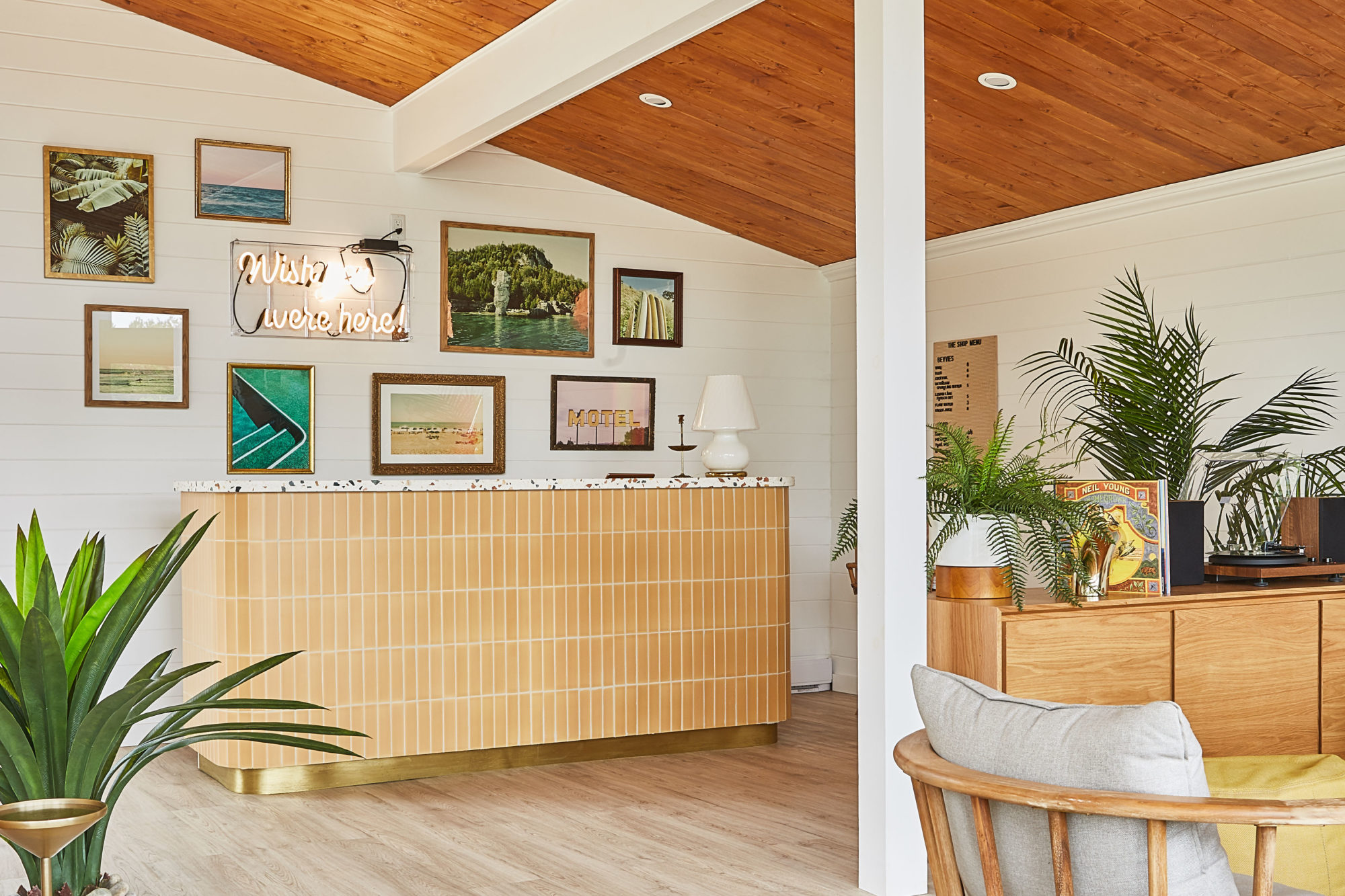 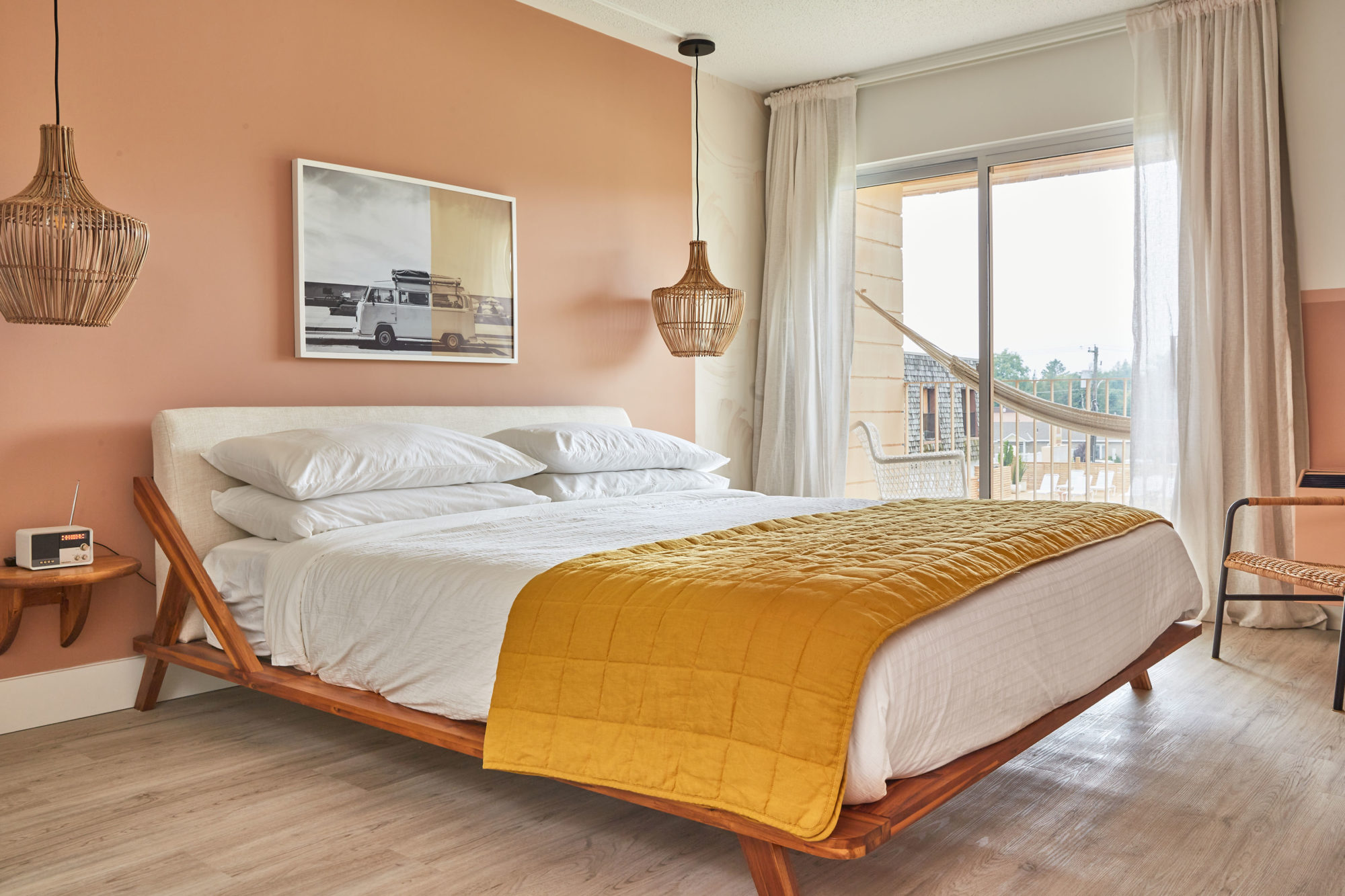 Sarah: The construction stoppage and material delays meant the soonest we could open was Labour Day weekend. We partnered with our restaurant operators, who included the owners of Bobby Sue’s Mac and Cheese and the former GM of Auberge du Pommier and Canoe on Heydays, a spot for reinvented coastal classics like lobster rolls and crispy fried shrimp with frozé. They had done a lot of work to get the kitchen ready to go before Covid hit, so we decided to do a pop-up throughout the summer in our front parking lot. The space was under construction Monday through Friday, but on the weekend they’d serve guests at picnic tables. Locals in the area fell in love with the food, and we got to get to know the community better. There aren’t that many restaurants in town, so there was huge demand—especially with so many people living at their cottages for the summer. Heydays had a really successful season.

April: Since we opened on Labour Day, we’ve been mostly sold out. We’ve tried to make the experience as fun as possible, with a socially distanced launch party and DJs by the pool. We created goodie bags for all our guests to amp up the in-room experience, and gave everyone full bottles of bubbly on opening weekend to enjoy on their private patios. We didn’t open the interior of the restaurant at first, instead choosing to focus on making the patio as enjoyable as possible. We think the place has been popular because it’s an option for a safe getaway that feels like a special splurge at the same time. We’ve been open a month and have already had four proposals and a few honeymoons. 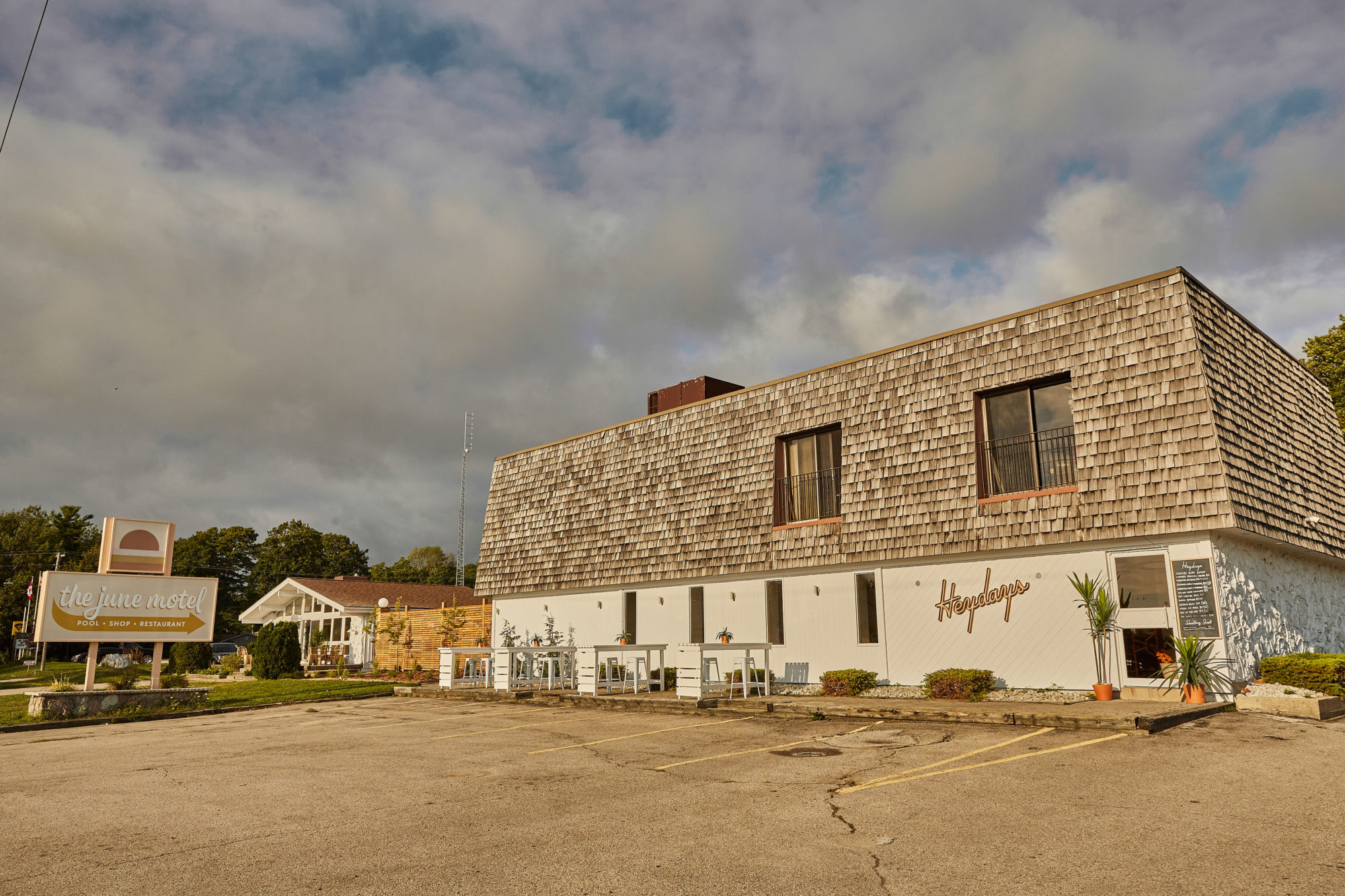 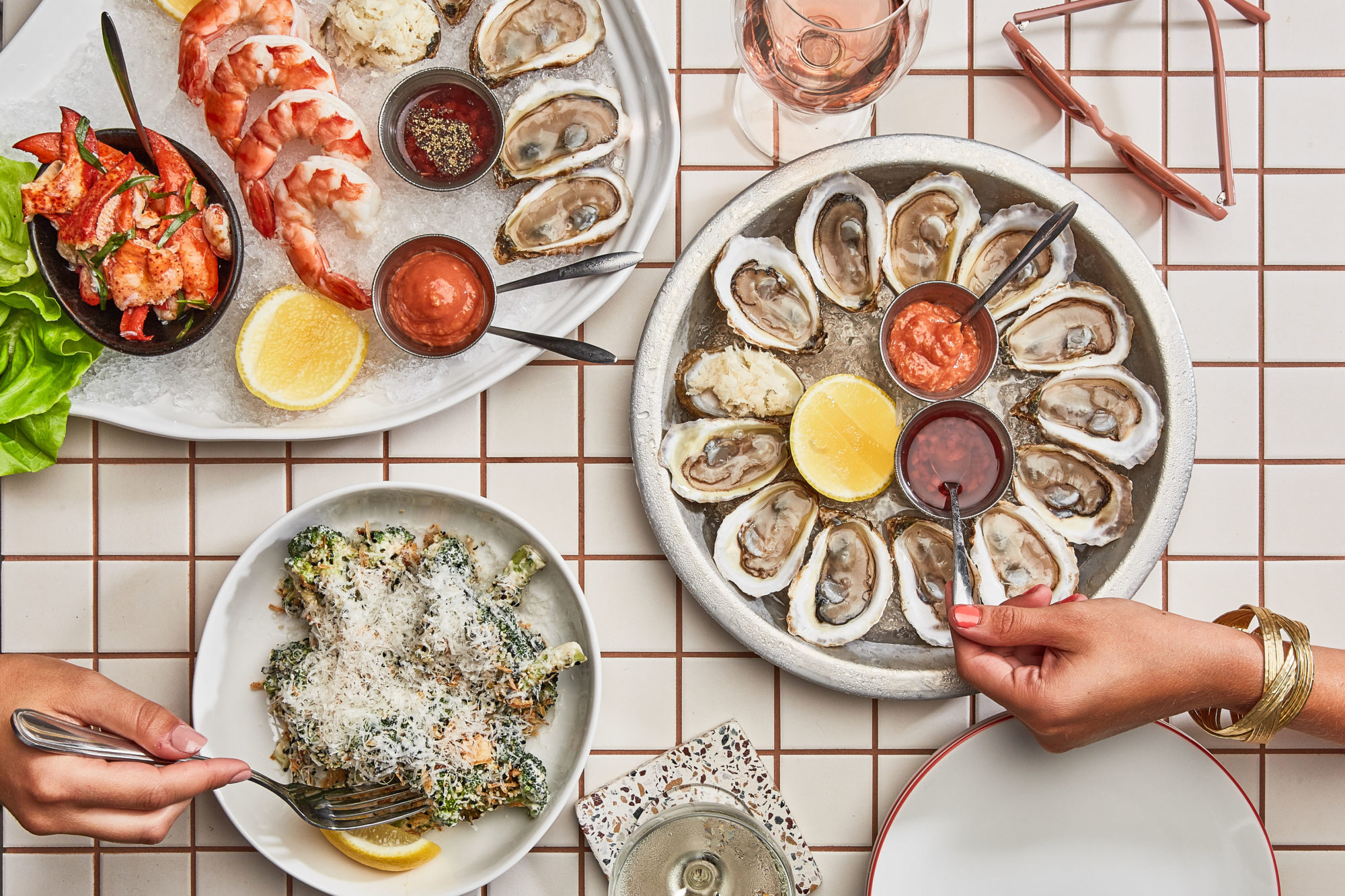 Sarah: Another benefit of being a retro motel is that no one has to walk down hallways. You drive right up to your door. And we have lots of outdoor space, so people can come with friends or family, stay in separate rooms and gather outside safely. The motel has proven to be well-suited to Covid times. We are going to stay open until end of October this year. We have to make the most of whatever season there is left.

April: We’re keeping our eye on the news. We aren’t sure what’s going to happen in October. We’ve had to be more creative with our business, and the silver lining is that we’ve come up with more efficient processes that make for the best possible guest experience. We just added retro wooden TV trays for all the rooms, so you can sit on your balcony overlooking the pool with a meal.

From all this, we’ve learned to be flexible. We can make plans and have the best strategy in the world, but when it comes down to it you have to make decisions based on what’s happening that day. We changed our cancellation policy to 24 hours, because we don’t want anyone with symptoms coming to the motel. We’ve had a ton of cancellations so far, and as Covid numbers rise I think we’ll see lots more.