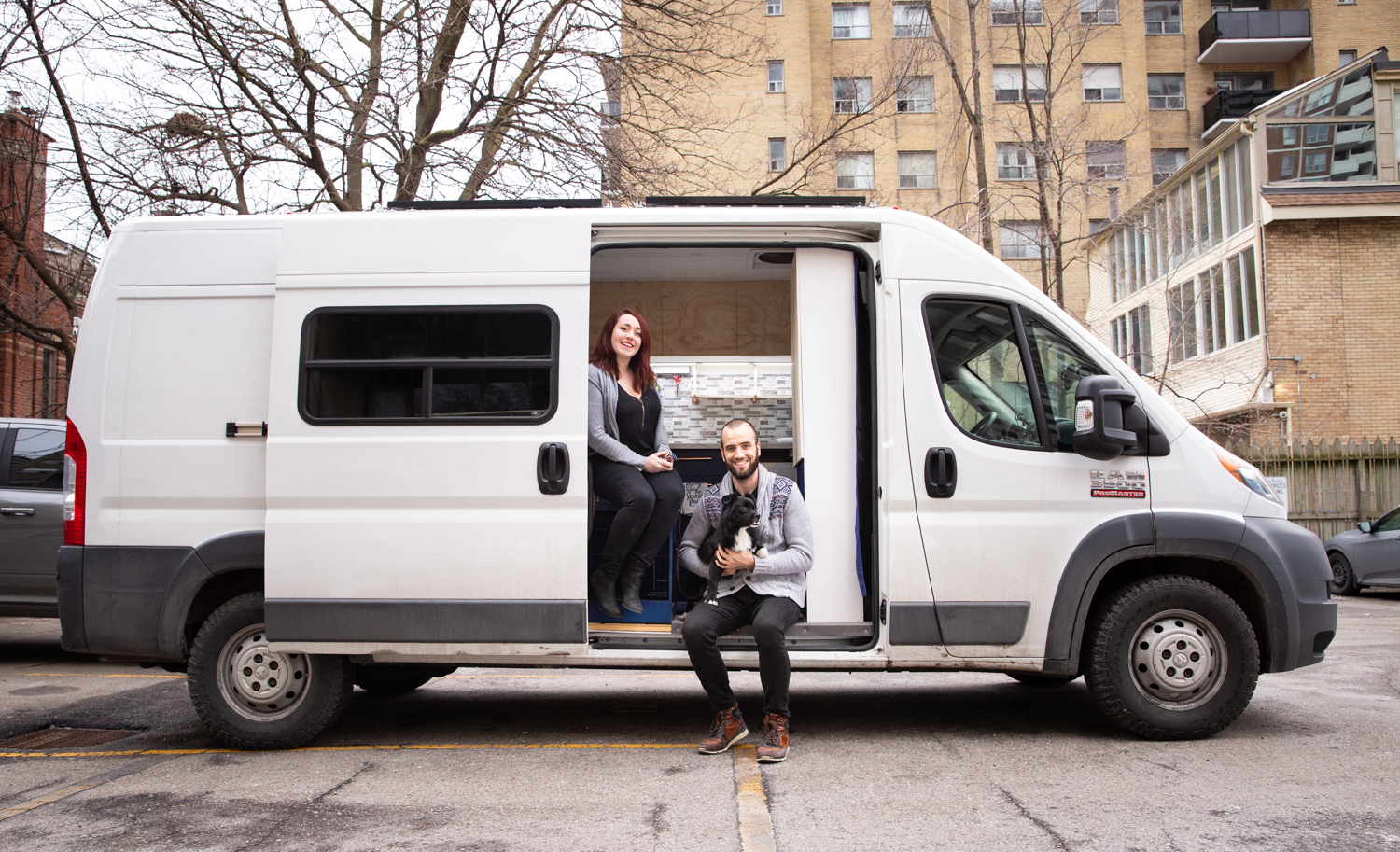 Who they are: Myriam Hugues Dit Ciles, 31, a project manager, and Tanguy Coignion, 30, a software developer

Myriam: We’re from France, and we’ve always dreamed of exploring North America in a van. We were inspired by YouTube videos and Pinterest boards about tiny homes. We looked into immigrating to the States, but the Canadian system was easier to navigate. In 2016, we got approved for permanent residency, and we moved into a condo near Yonge and Bloor. We started planning our trip in 2018, bought our van in April 2019 and started building it out the next month. 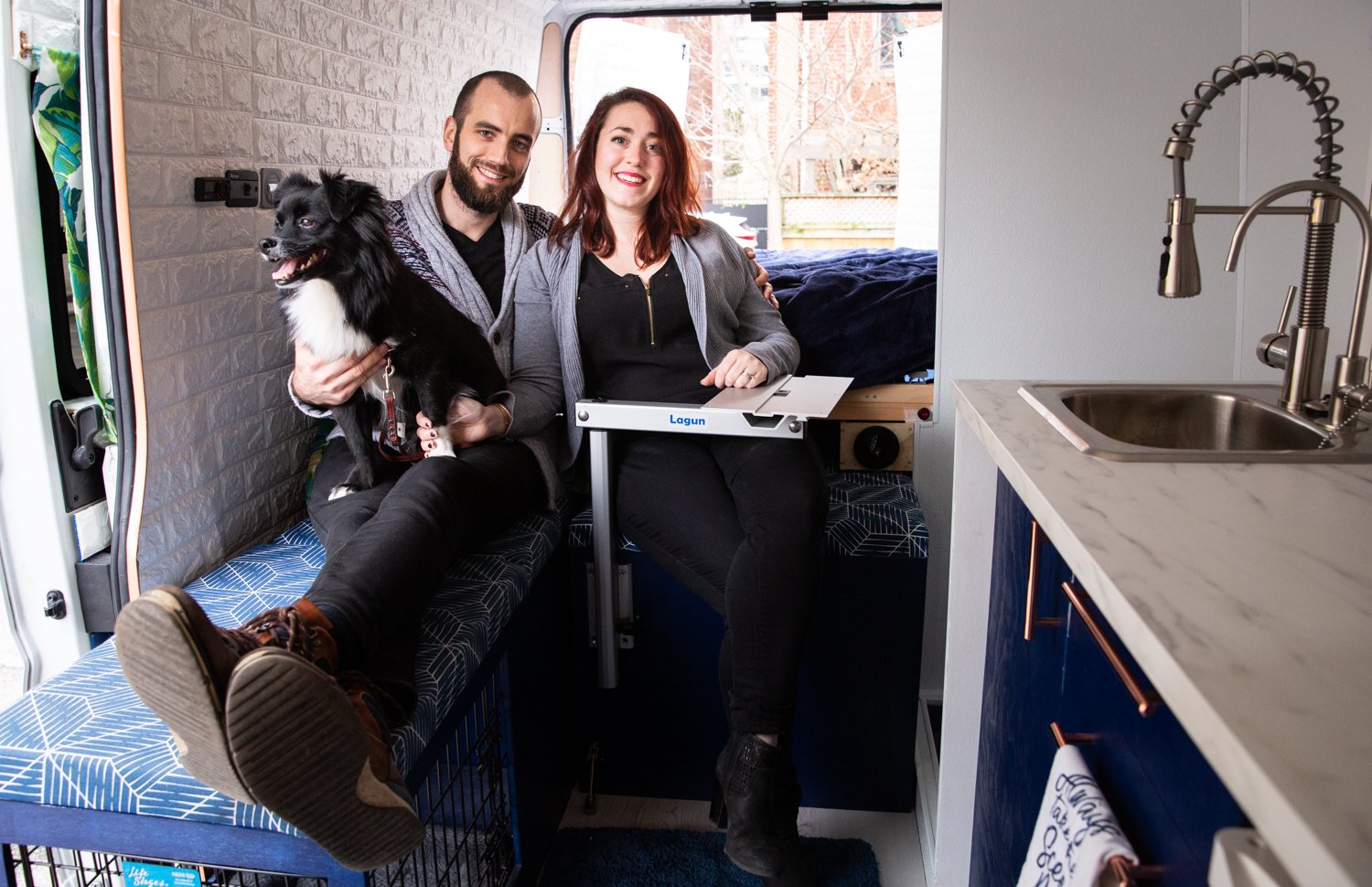 At first we just worked on the weekends, but soon we were building on weeknights, too. We learned on the fly. We like having everything done perfectly, and nothing can be perfect in the van when you’re building with no prior experience. If you make a mistake with wood, you can just cut a new piece, but plumbing and electrical are more expensive and time-consuming. If there’s a leak in the plumbing that you don’t know about it, it could flood the van and ruin the whole thing in minutes.

We arranged for subletters to move into our condo on March 15, so we were working on a deadline. The plan was to have them stay in the condo with our cats, Coco and Chanel, until March 2021, while we travelled with our dog, Philibert. Tanguy made an agreement with his company to work remotely and part-time for a year so we would have some income. My work contract had ended but I planned to work on building a YouTube following for some additional income. We currently have about 600 followers. On the first leg of our trip, we planned to drive through Detroit, Chicago, Yellowstone, Colorado, New Mexico and San Diego, and then later drive up to Alaska and across Canada into the Maritimes.

We wanted to be in Chicago for St. Patrick’s Day and catch a basketball game there. Tanguy is a huge NBA fan, so we planned to visit an arena in each city. We left Toronto on March 8 and crossed the border into Detroit. At the time, the fear of Covid had hit France. Our family and friends were surprised we were still travelling, but we didn’t think it would be the same in North America. And then by the time we got to Chicago, both the parade and NBA game were cancelled. 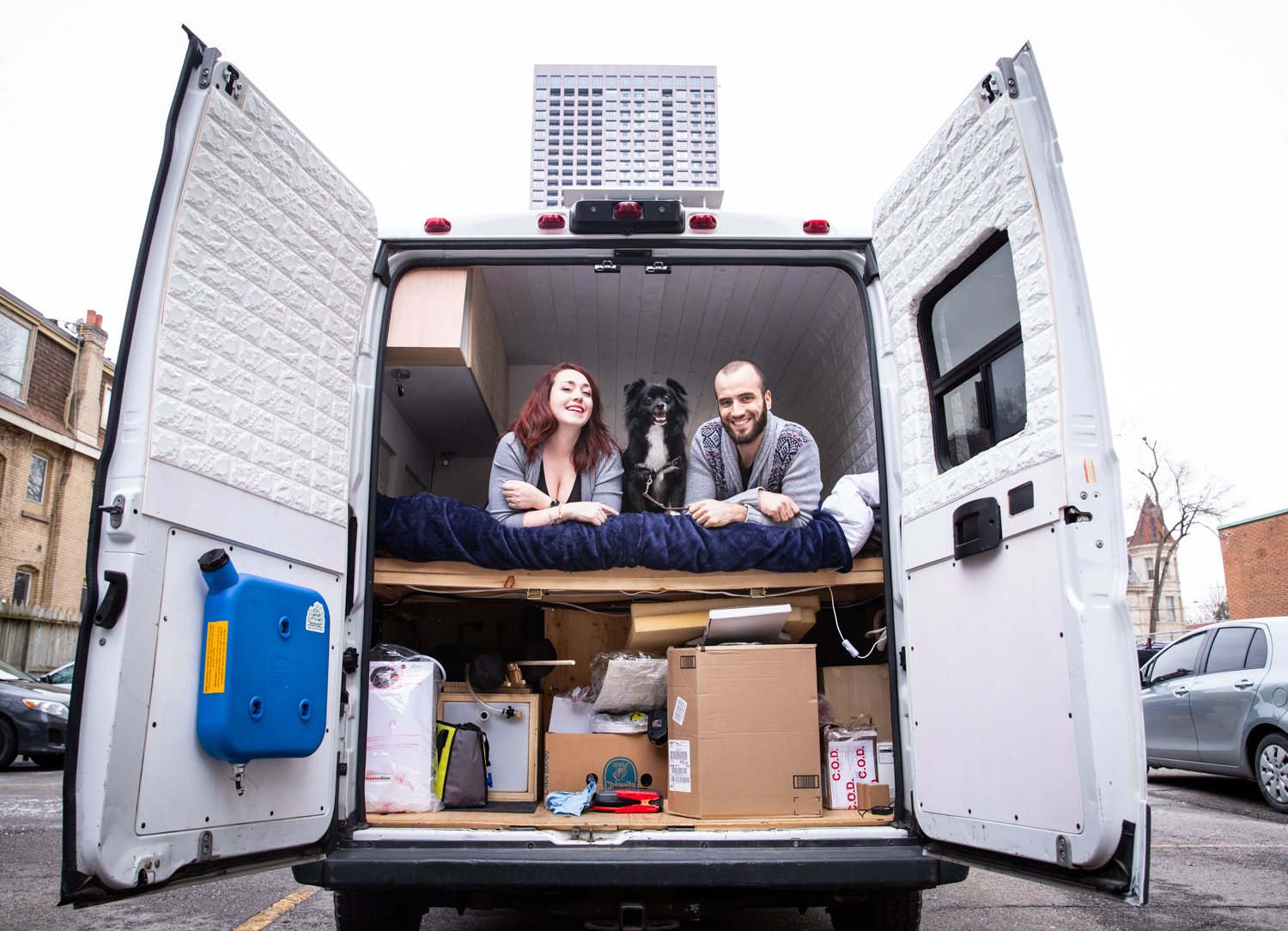 In Chicago, we rented a parking spot from an Airbnb-style app. We stopped at truck stops where we could shower for $10 to $13. If there were no showers around we used baby wipes or a quick rinse in our built-in shower. We had an induction electric cooktop and an Instant Pot, where we made pasta, bulgar, quinoa, couscous and soups. When we were in a rush, we ate sandwiches. Sometimes I missed having an oven, but we made do.

When Trudeau announced they were closing the border, we thought, Maybe we can ride the pandemic out in the U.S. as tourists. But then we thought, What if they close the borders to permanent residents? We panicked that we’d get stuck in a country where we had no support. If the border situation changed, we would have to leave the van in America and fly to France. It would have been complicated. We also realized if we got sick in the U.S., it would be harder for us to get access to health care. In Canada, we had OHIP.

On March 18, we cut our trip short in Wisconsin and started driving back. We drove seven hours straight until we reached the closest border crossing near Sault Ste. Marie at 1 or 2 a.m. Once we crossed the border, we were so relieved. But we were crushed to abandon our big trip after two years of planning. Plus, we’d rented out our condo for the next 12 months, so we had nowhere to live. 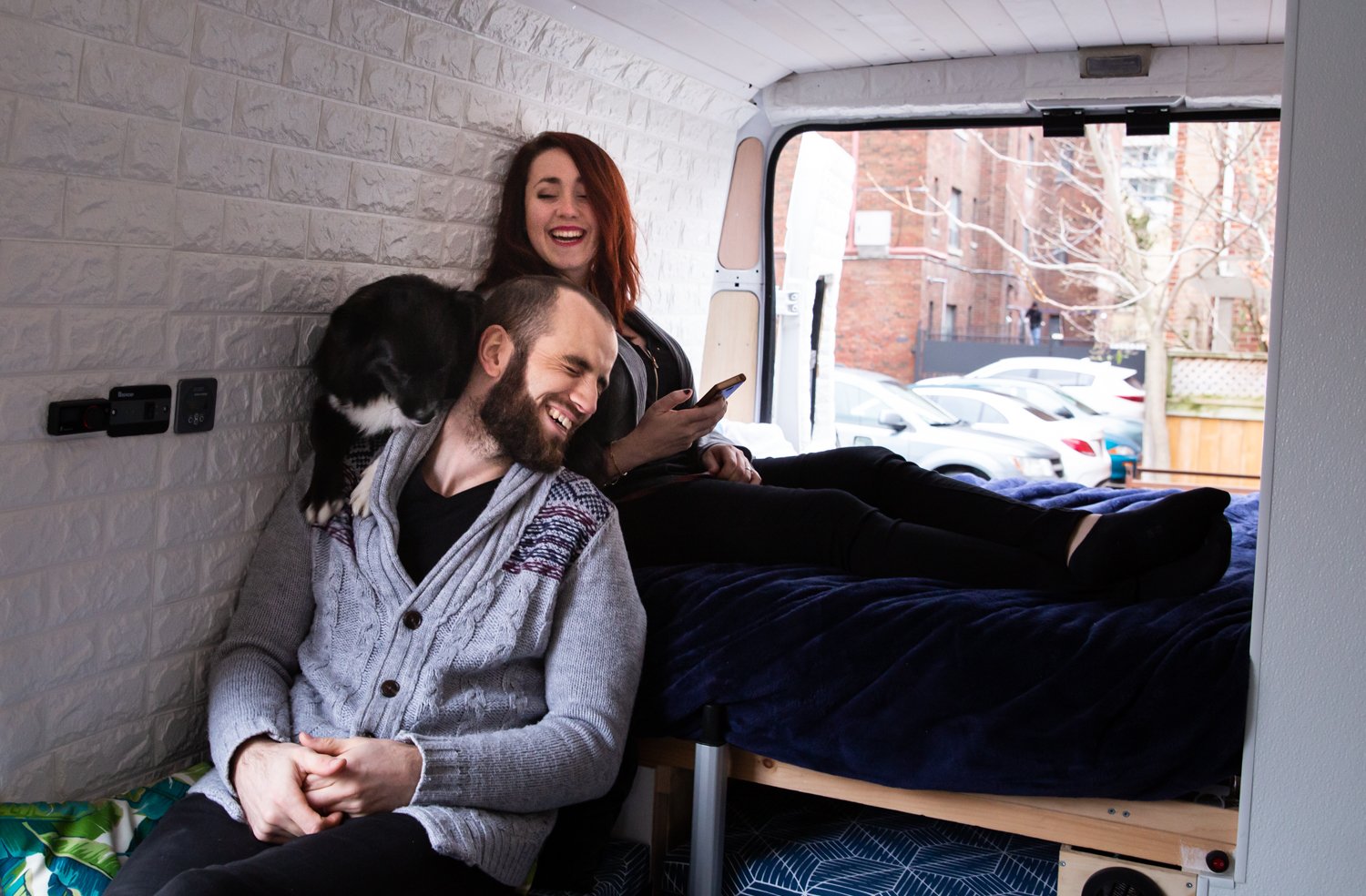 After we got back, we stayed in Sault Ste. Marie for a week. We parked at a truck stop because it was the safest option. We had our heater and insulation, but our plumbing wasn’t built for the brutal winter because we’d planned on heading south. At night, it was -15 degrees. Our grey water tank froze, and we had to learn how to unfreeze it. We tried pouring hot water and drilling the ice in the pipes. Eventually we learned about anti-freeze.

At that point, we didn’t know what would happen next. After a week in Sault Ste. Marie, we moved south to Manitoulin Island. It’s pretty busy during the summer but empty and low-key during the winter. We parked next to the frozen lake and watched little otters play every day. It was the perfect distraction. We made it 10 days without using any facilities. At that point, we knew we’d need to refill our fresh water tank for drinking and showers soon, but every public tap was shut off and we couldn’t find a water source. We refill our fresh water tank every eight days, so it was urgent.

After three weeks trying to isolate in a van, we decided to move into an Airbnb. We spent April in a cottage by a lake near Minden. We felt lucky to be able to walk with Philibert freely when most of our friends in Toronto were stuck in their apartments. We only got groceries twice and otherwise isolated the entire time. We were just happy to be safe and have access to the outdoors. 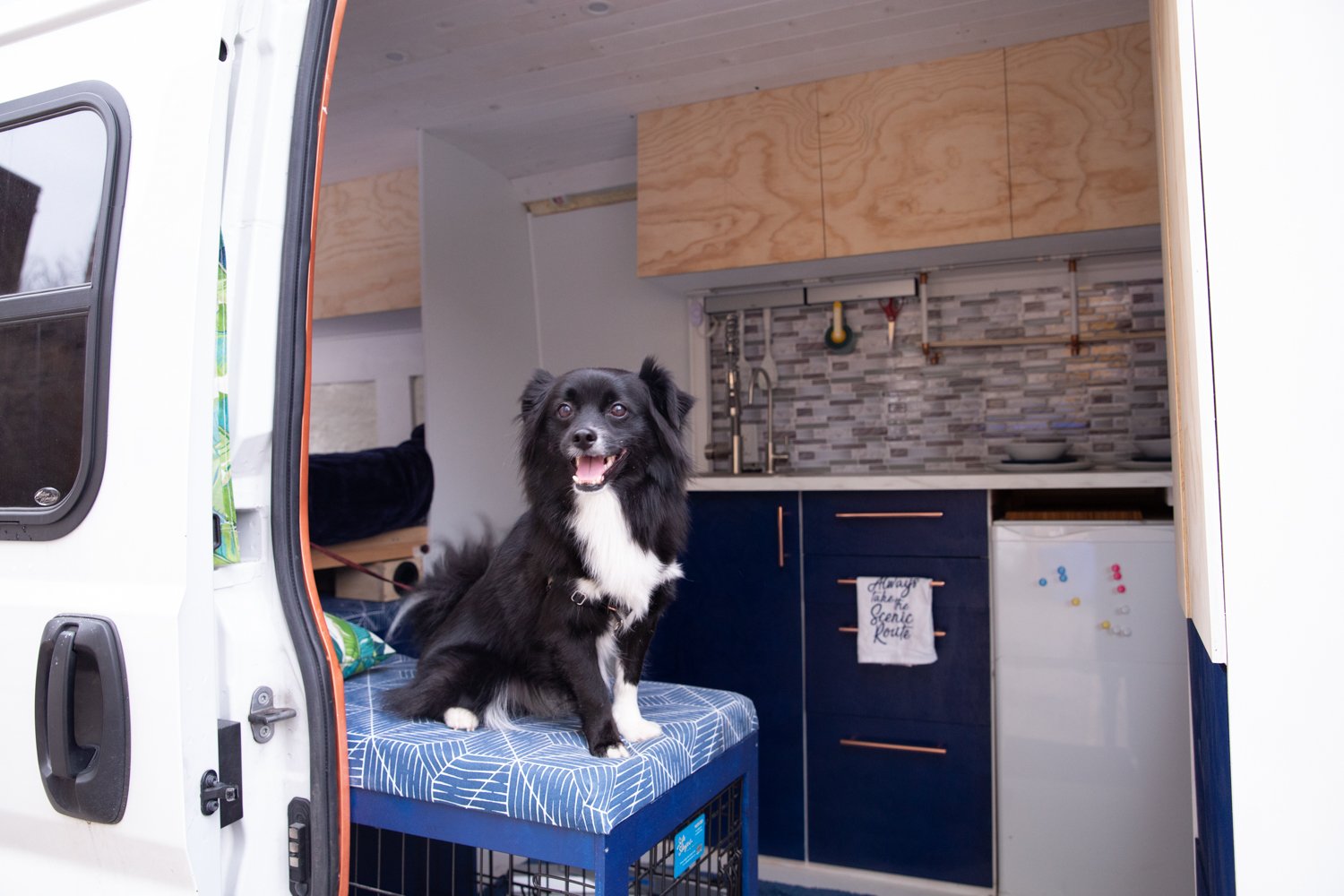 It was out of our budget to continue renting the Airbnb in May, so I reached out to wildlife centres that usually rely on seasonal work from international students. With the borders closed, they were desperate for help, especially becaus spring is when all of the baby animals arrive. I told Heavens Wildlife Rescue in Oil Springs, Ontario, near Sarnia, that we’d able to volunteer as soon as the first animals arrived, and they welcomed us.

We drove directly to the wild life centre, with no unnecessary stops and lots of hand sanitizer. Working at the wildlife centre was like working at a hospital; we had to wear masks and sanitize everything. We ended up staying for a month and a half. I was in charge of the nursery, so I watched over all of the baby squirrels, raccoons, groundhogs and skunks. In the time I was there, I looked after around 120 baby raccoons. When they grew a bit and became more independent, they were released back into the wild. It was an amazing experience that I would’ve never been able to do under other circumstances. We lived in the van during our stay there. There were bunk beds but the owner was hoping for other students to arrive.

In June, when provincial borders opened for travelling. we drove straight to B.C. because our original plan had us in Vancouver for the first of June. We were going to meet two friends who also live in a van. It was already mid-June by this point so we drove as fast as we could and made it in five days. 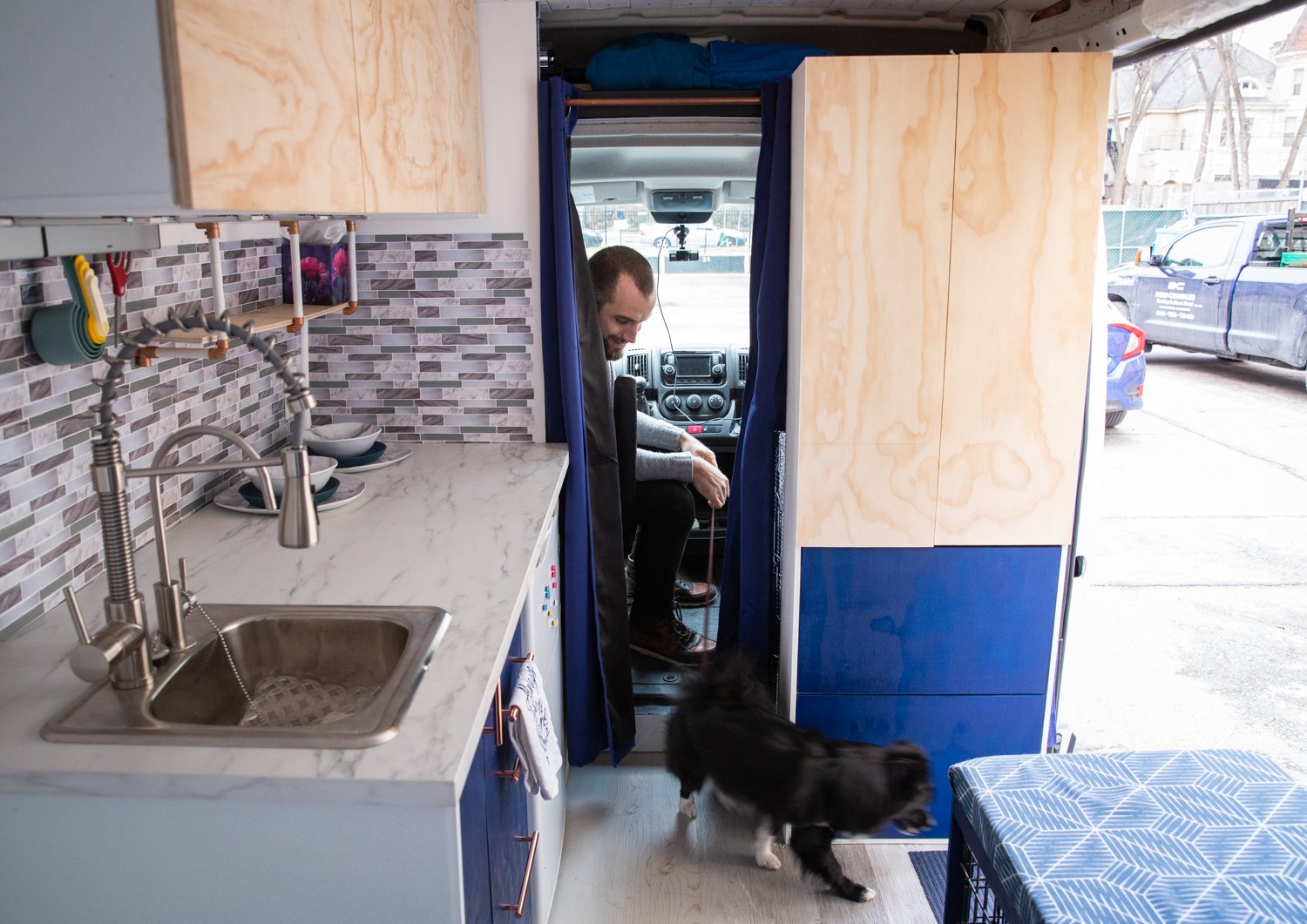 The silver lining of travelling during the pandemic is that you have the parks all to yourself. We’ve seen pictures of Banff thronged with international travellers, but in June there were only a few other people. In some towns we passed through, we saw signs that read, “Older people live here, don’t visit” or “Immunocompromised people live here, don’t approach.” We were concerned about plate-shaming some but it never happened to us.

Once we were in British Columbia, it was a lot nicer. The Covid cases were low. We went up to Whistler and hiked and did yoga in Squamish. The weather was mild and it was good to be in the van. We found a cute spot above the city to park and would wake up with a nice view. We also slept in Walmart parking lots or truck stops.

We thought about staying in B.C. but it wouldn’t be easy for Tanguy to get more time off from his company, and we still wanted to explore North America. We’re hoping to defer six months of part-time work to our next trip and have him return to full-time work in November. Currently, he wakes up early and works two to three hours in the morning before we go exploring. If there is something that needs to be done, he’ll finish it in the evening.

We tried to make the most of van life, even though we moved into a van during a pandemic. We went to Vancouver Island, Banff, Jasper, Edmonton, Calgary and Thunder Bay. Now we’re in Quebec, watching whales. When we go somewhere, we don’t touch things or interact with people. We avoid visiting small local shops because not everyone follows the rules. Instead we go to Bulk Barn and Costco because they are so good with their safety precautions. We don’t want to catch the virus. If we’re safe for ourselves, we’re safe for others.

We’re moving back into our condo in November since we won’t have the option to go south this winter. Our subletters are happy to give up the apartment—they moved to Toronto to be closer to work, and now that they’re working from home, they don’t need to be in the city anymore. They’re considering working remotely in Vancouver or moving back in with their parents in Mississauga.

It’s sad to give up our nomadic lifestyle because we thought our time in the van would be longer. As soon as the world is calmer and safer, we’ll jump right back into the driver’s seat. After November, we’ll still continue to travel in our van, but just for weekends. A few months of the cold, hard winter in the van was tough. We survived, but we don’t want to do it again.