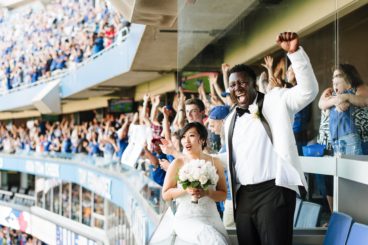 Inside a sporty celebration at a Jays game

Sunny and Andrew Miller met nearly a decade ago while they were both working at Mount Sinai Hospital. Andrew was a charming porter who’d regularly pop into the kitchen, where Sunny worked as a food services supervisor. “I initially thought he was so annoying,” says Sunny. “He was in my kitchen all the time. I was like, ‘Doesn’t he have work to do?’” Eventually, Andrew won her over by sending a cute fax to the kitchen asking her if she’d like to go for dinner. After six years of dating, he proposed during what Sunny thought was a photo shoot. (Sunny is now a health and wellness coach, while Andrew is a TV personality and the founder of a youth-focused not-for-profit). The two were in a pumpkin patch at the now-closed Whittamore’s Farm in Markham when he got down on one knee.

Before she met Andrew, Sunny always imagined she’d elope. “I’m a very practical person,” she admits. “I was never the girl who dreamed about her wedding day.” Andrew, on the other hand, had a more extravagant plan. “I knew I wanted to do it fresh and different,” he says. “I wanted to wear Jordans, have crazy cool cars and be able to sprinkle a little bit of sport into the day.” They shot their engagement photos on the court of the ACC and decided to take their wedding day one step further by getting married at the Toronto Marriott City Centre during a Jays game.

The night before the ceremony, the couple stayed at the Toronto Marriott City Hotel, where they got ready the next morning and later had their reception. 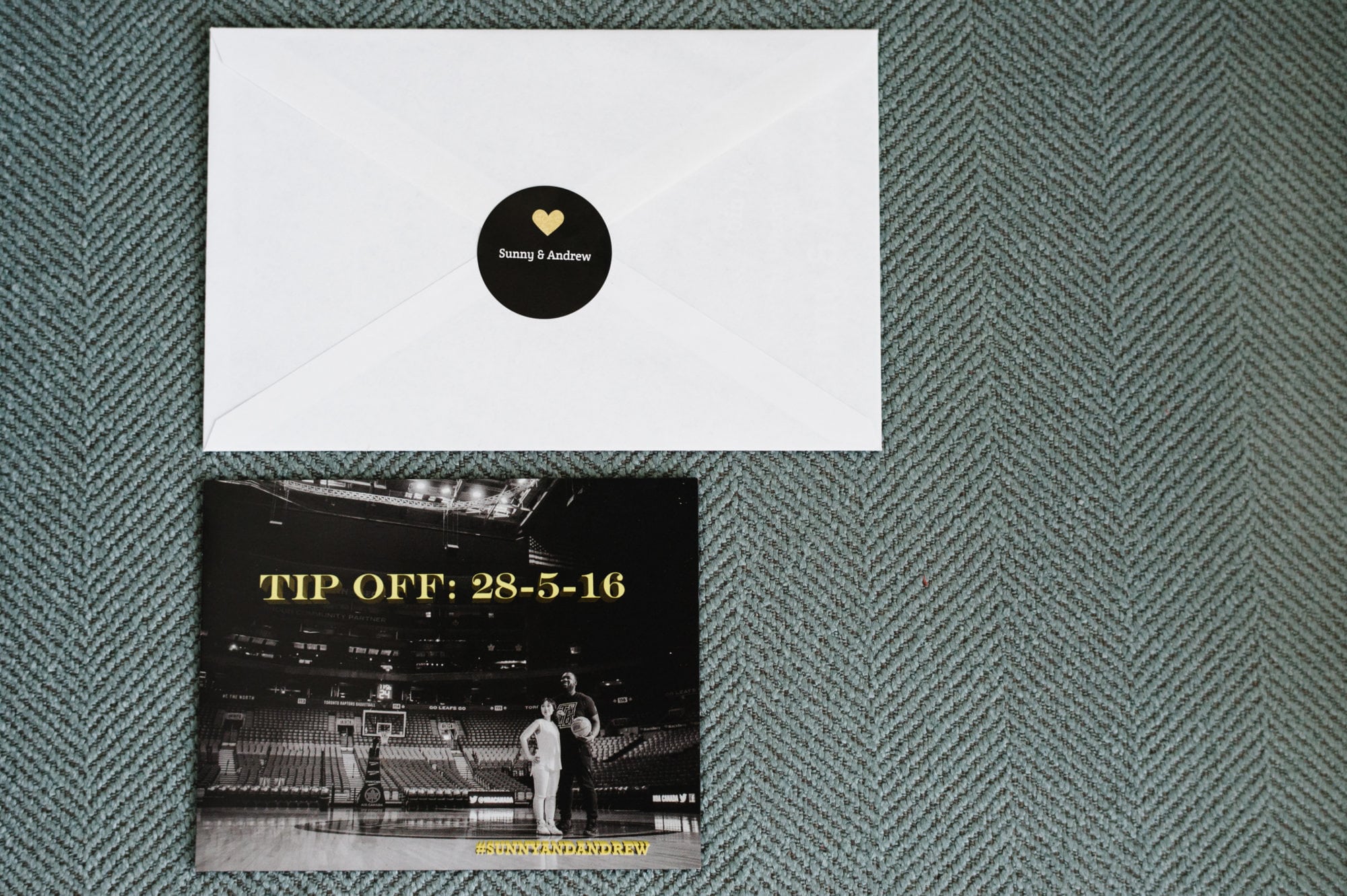 As they looked out their window, they watched fans gather for the Jays vs. Red Sox game: 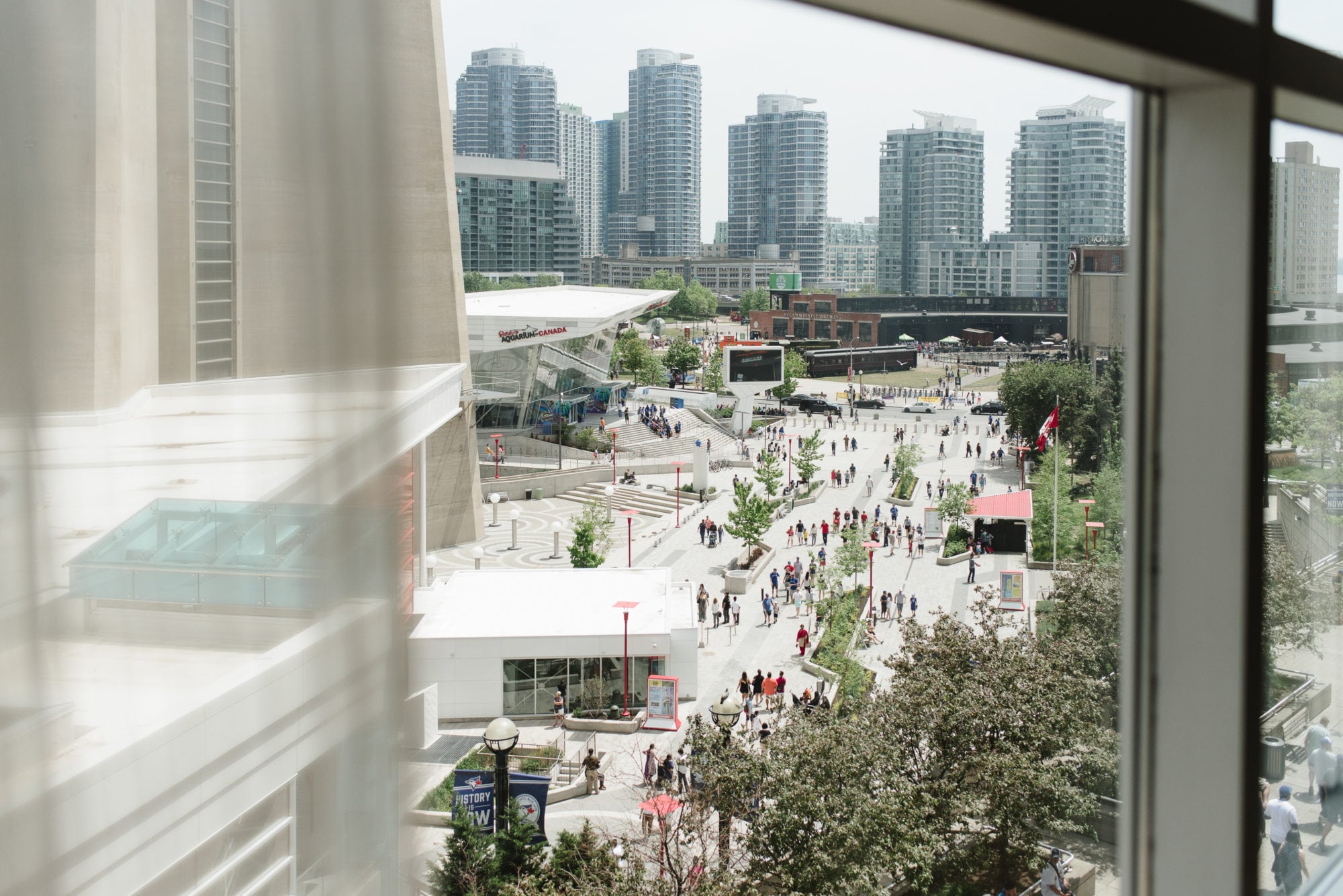 Andrew’s brothers pulled up to the ceremony in a 1971 Chevrolet Impala convertible and a 1978 Oldsmobile Cutlass Supreme. “My father worked at General Motors for 35 years, so we grew up around cars,” says Andrew. “My brothers and I all have classic American muscle cars”: 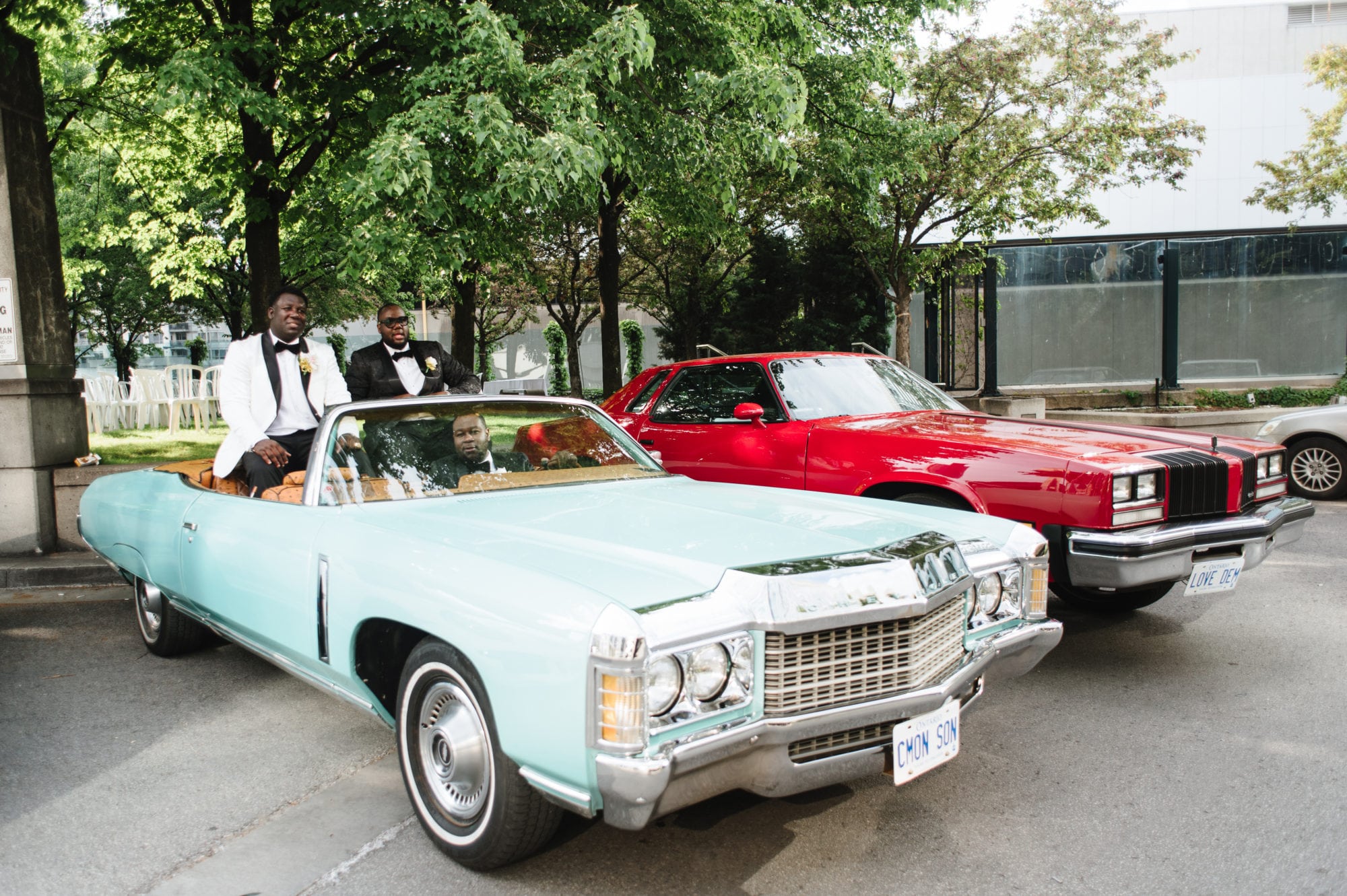 The ceremony was held in the shadow of the CN Tower at the Toronto Marriott City Centre Parkette:

The game began partway through the ceremony and fans cheered for the couple as they passed by:

Right after Andrew and Sunny were pronounced husband and wife, the Jays hit a home run. “The timing couldn’t have been more perfect,” says Andrew: 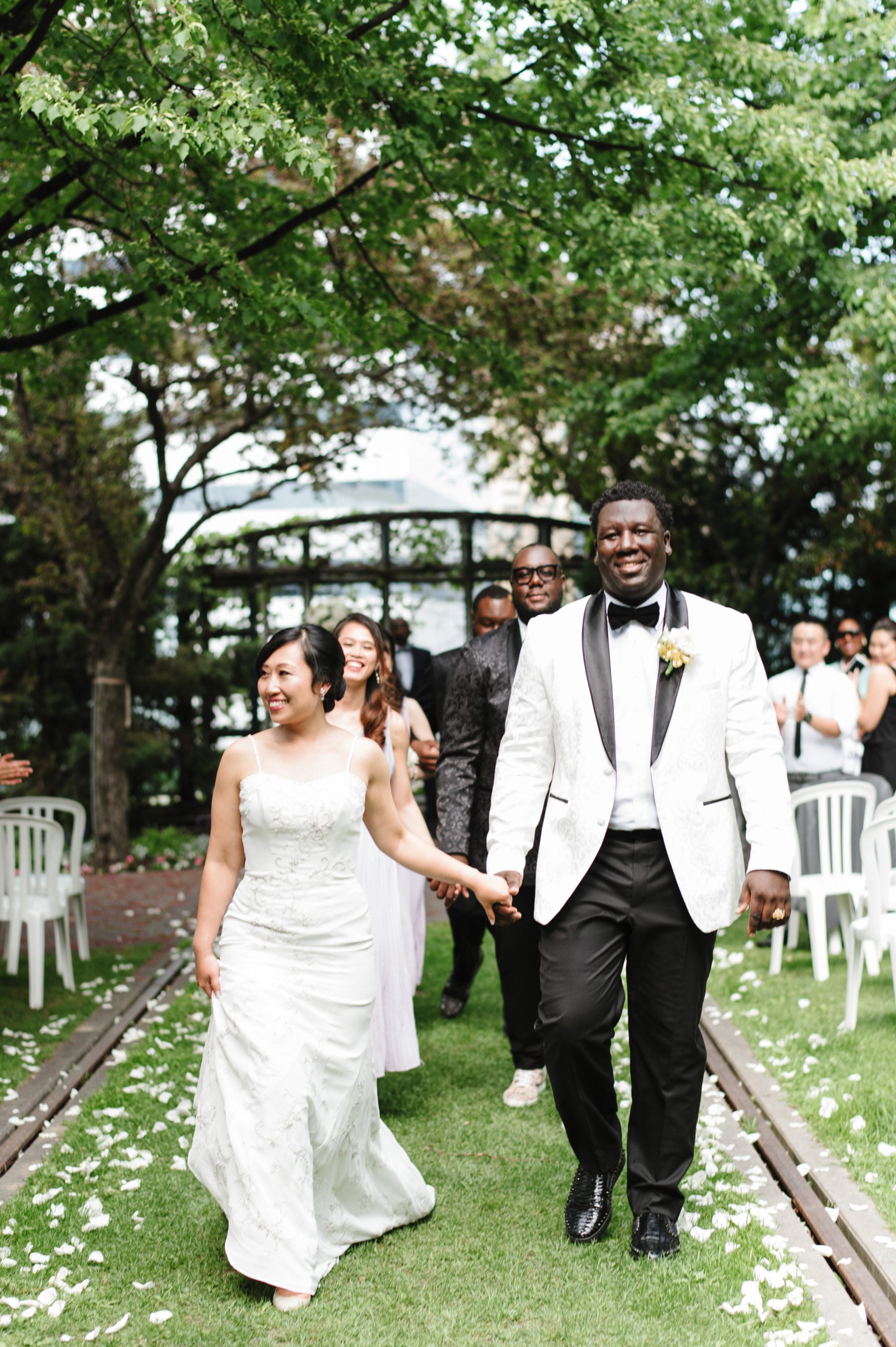 The newlyweds walked straight from their ceremony to a private skybox inside the hotel, where they watched the end of the game. Sunny only had two stipulations for her dress: a sweetheart neckline and something that wasn’t poufy: 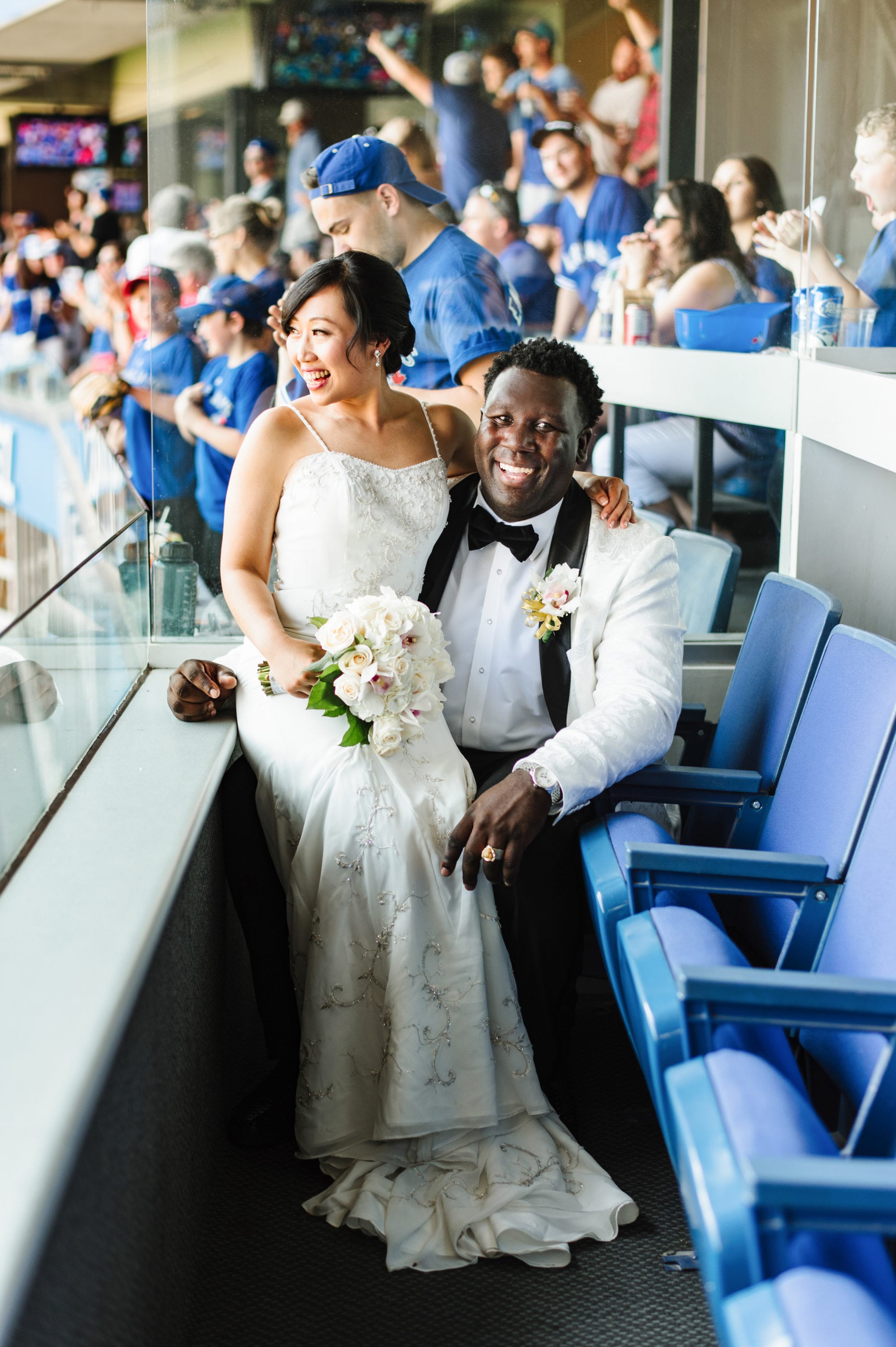 The Jays won in a dramatic 11th inning walk-off: 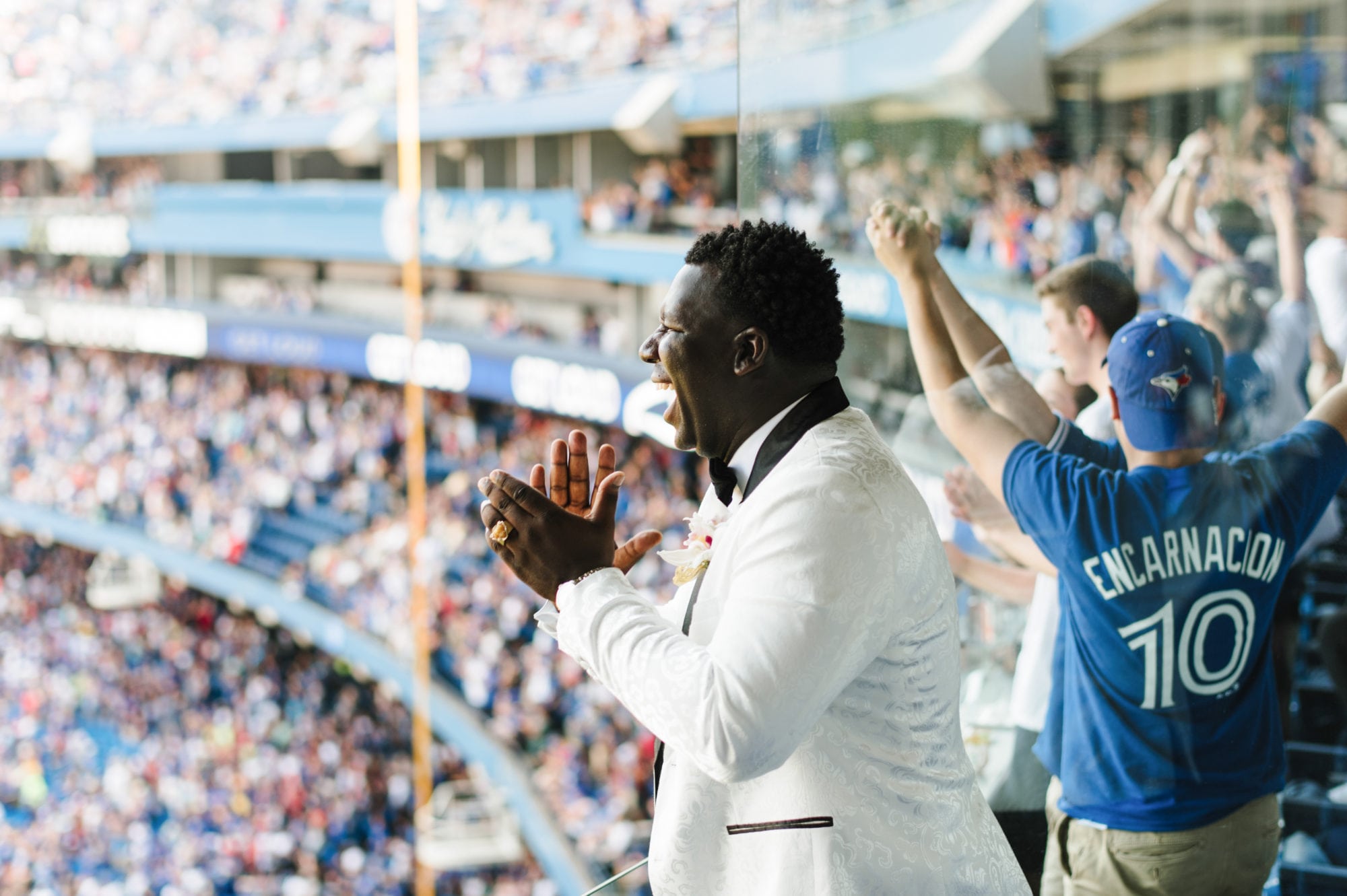 Back at the hotel, they set up a mini basketball net for the kids (and grownups): 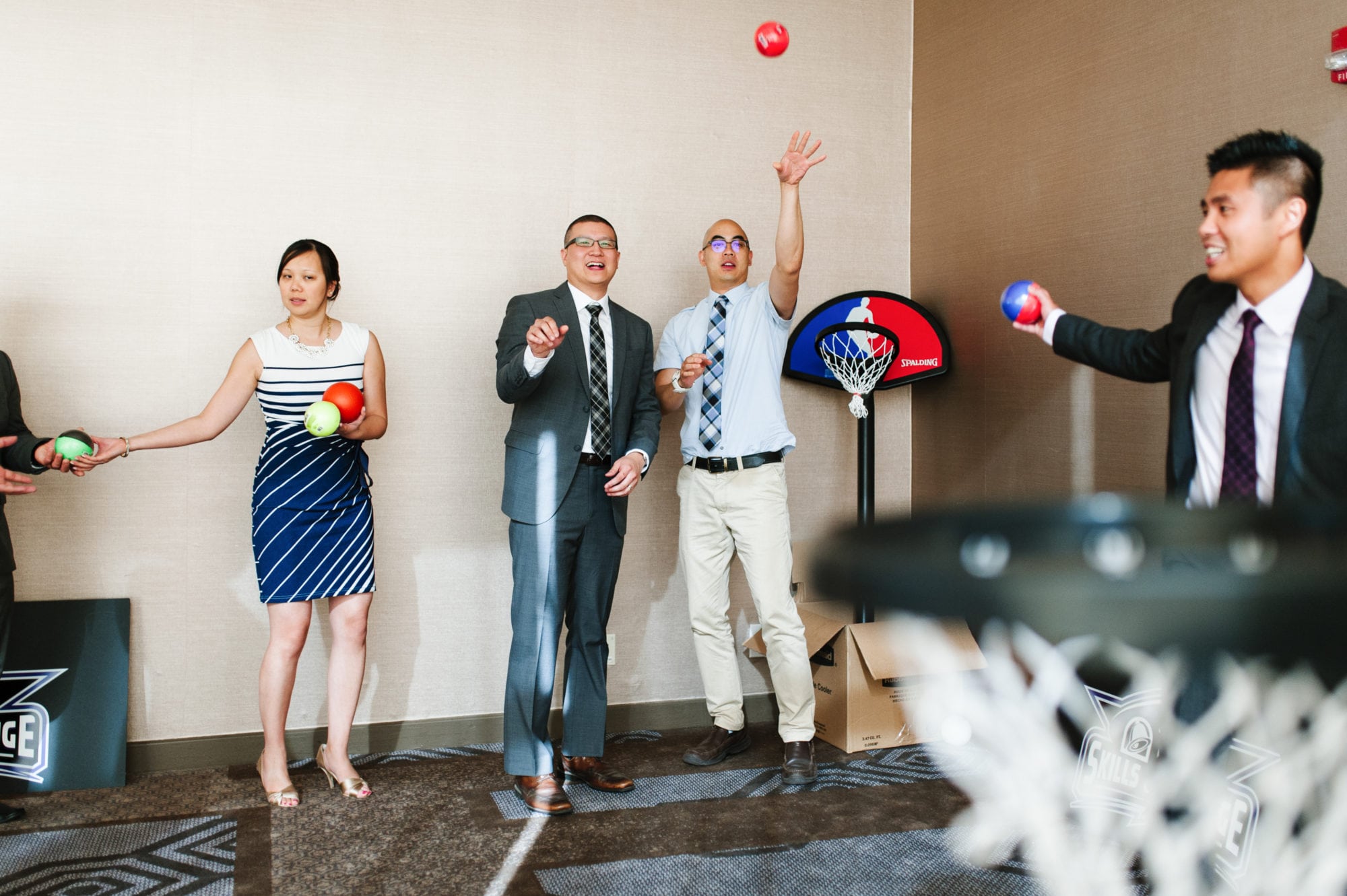 The couple sat at their own table during dinner. Sunny is from Taiwan and Andrew’s family is Jamaican, so they wanted to serve dishes that combined their two cultures. “For me, the food has to be the best. Everything else is not as important,” Sunny says. The late-night snack was popcorn chicken and mini waffles with grilled pineapple: 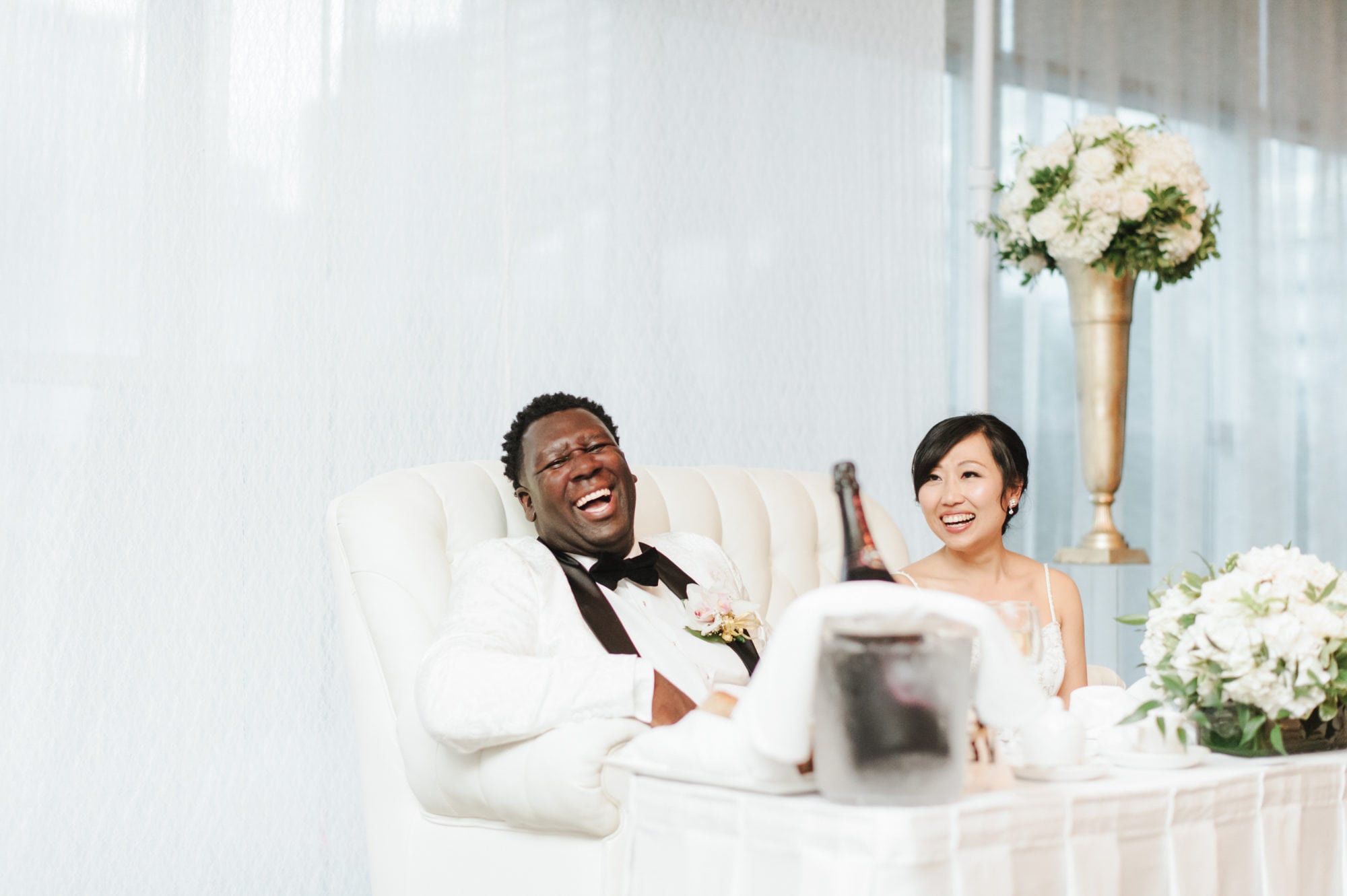 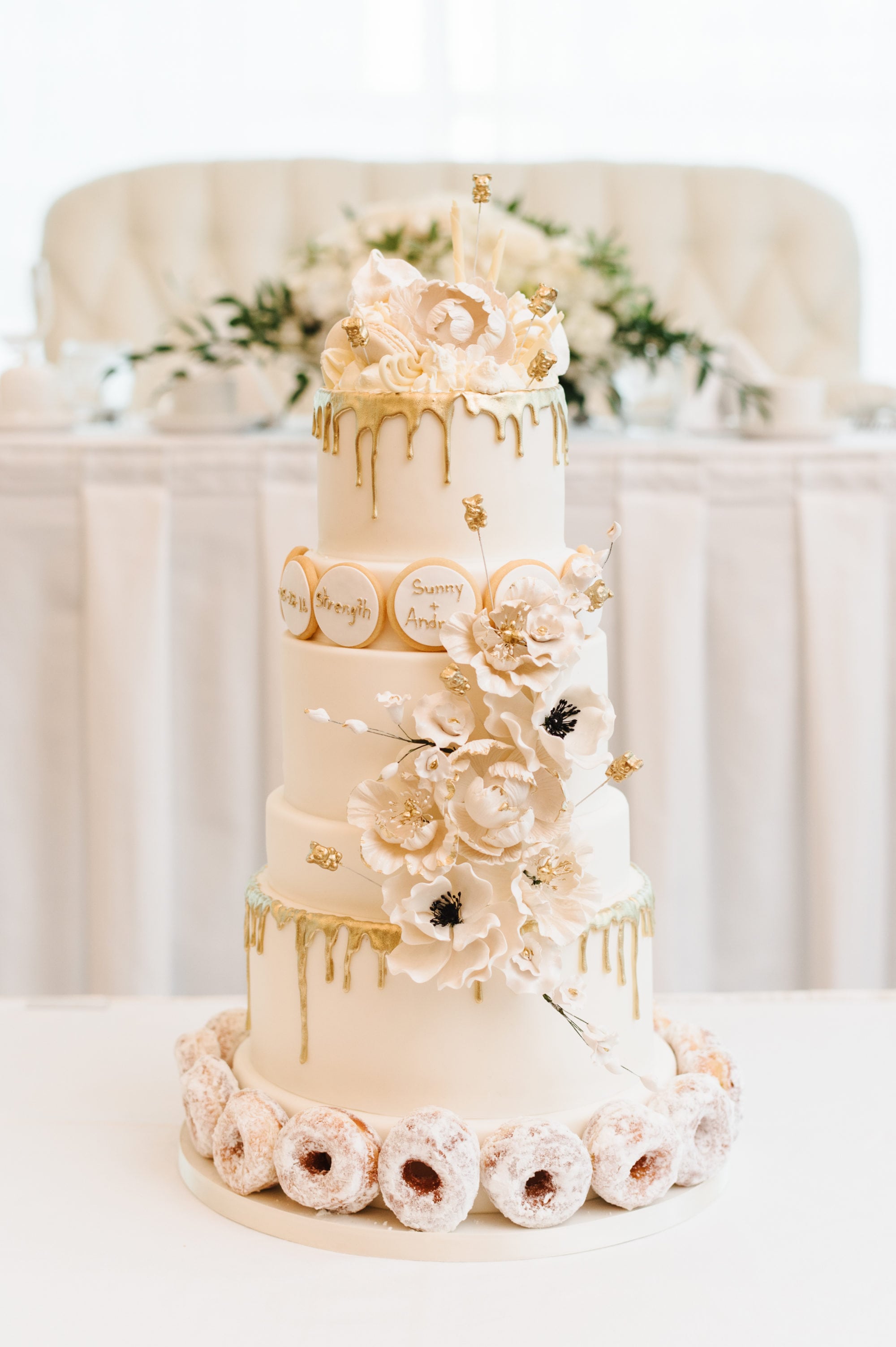 Their first dance was to Musiq Soulchild’s “Don’t Change”: 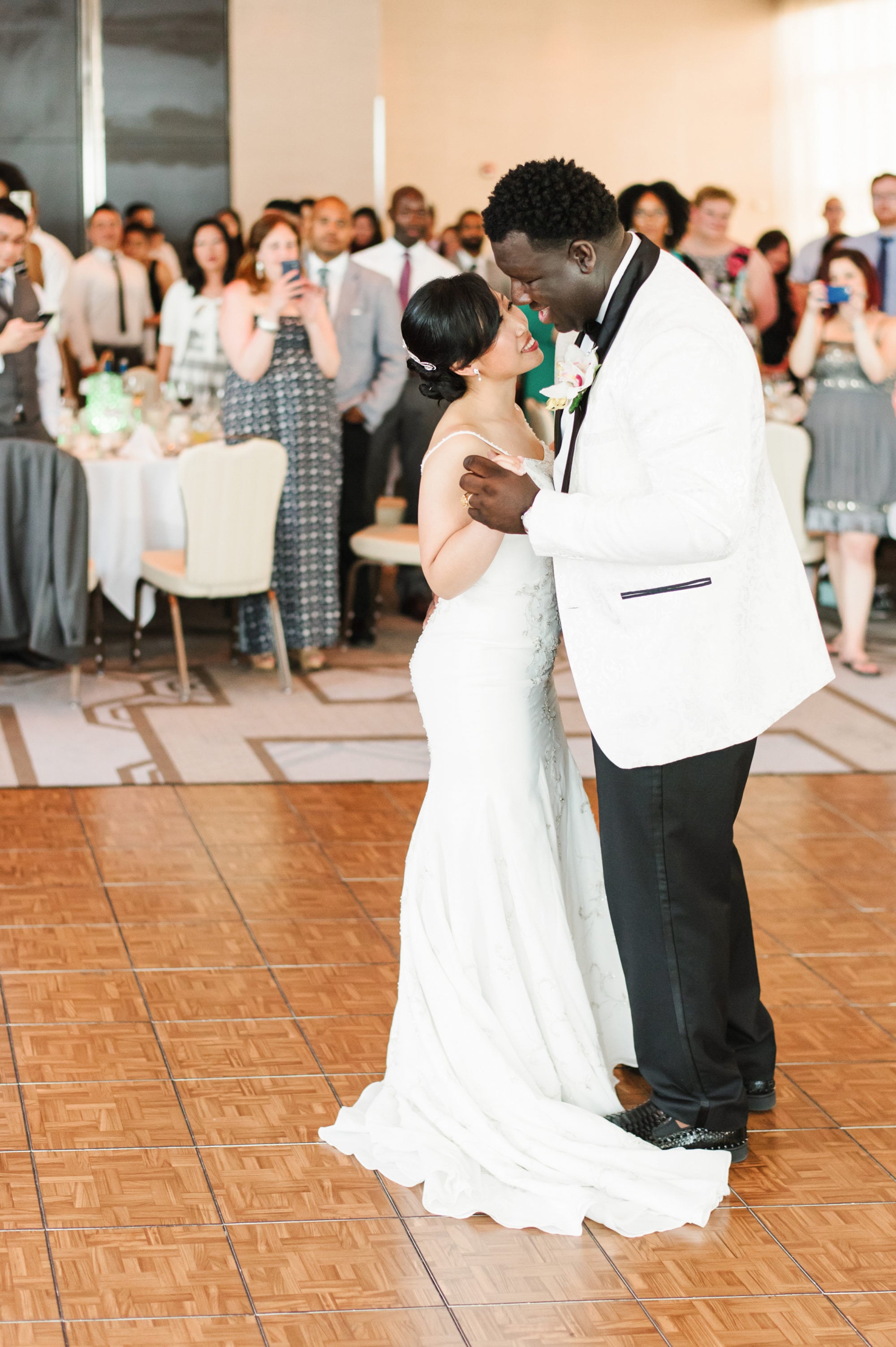 Andrew wanted to incorporate aspects of Sunny’s culture, so they changed into traditional Taiwanese outfits. The only problem was that Andrew is six-foot-four. “He’s a big guy, and typical Chinese men don’t come that size,” says Sunny. They found a custom tailor who made their outfits from scratch, and also designed Andrew’s main wedding outfit. Andrew accented the look with some red Jordans: 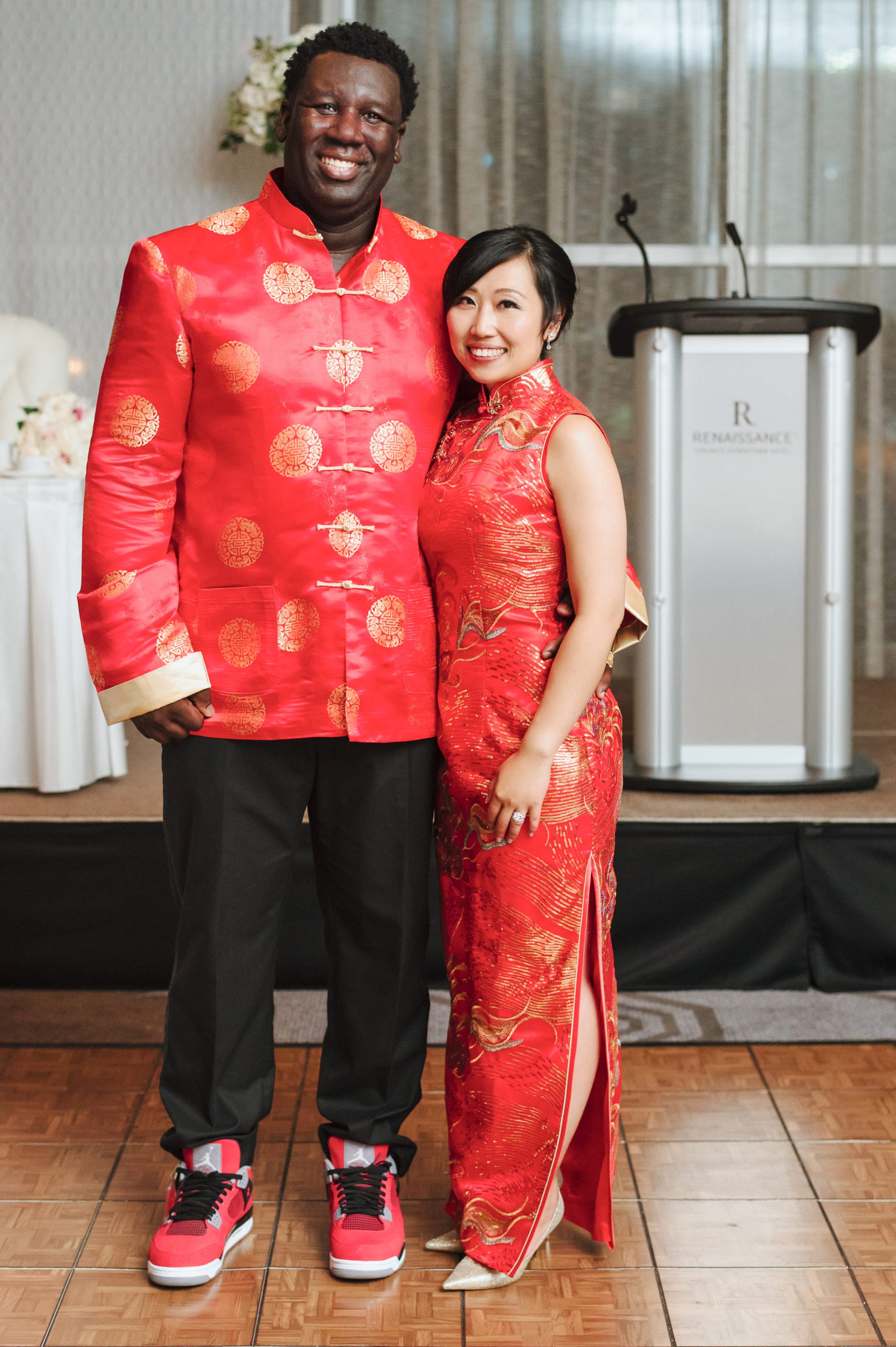