Gone are the days of the mere candlelit dinner with a ring in the champagne. Today’s marriage proposals involve over-the-top decorations, serenades and helicopters. We spoke with five couples about their elaborate plans to pop the question. 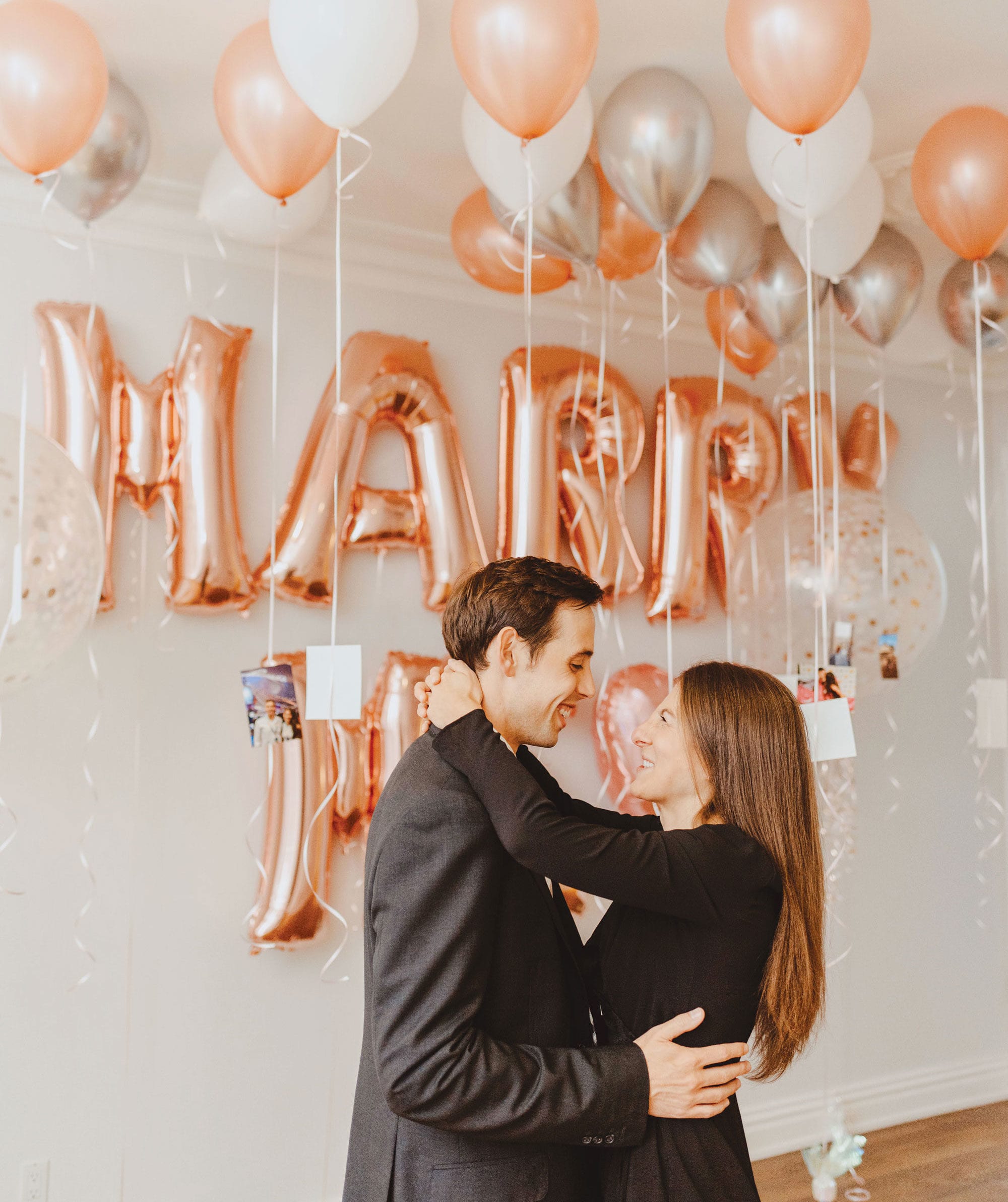 Audrey met Zachary in the fall of 2015. They’d been casually talking for a few weeks, and one night, when her date cancelled at the last minute, she called Zachary and asked him out for a drink at Drake One Fifty. They clicked and made dinner plans for a few days later.

After two years of dating, they purchased their dream home together, a charming Victorian semi in Cabbagetown. Zachary co-ordinated his proposal with the day they got possession of the house. It was a frantic morning: he scrambled across the city to pick up the keys, the ring and a bottle of Fat Banker Chardonnay, the same wine Audrey ordered on their first date.

When Audrey arrived at the house that night, she opened the door to find Zachary waiting in the living room next to a bunch of rose-coloured metallic balloons that spelled out “MARRY ME.” He recited the line he’d spent days rehearsing: “Our house locked you in for the next 30 years. I want to lock you in for life.”

He now jokes that asking her to marry him was more of a statement, since the company didn’t make balloon question marks in that colour. “I was pretty confident she’d say yes.” 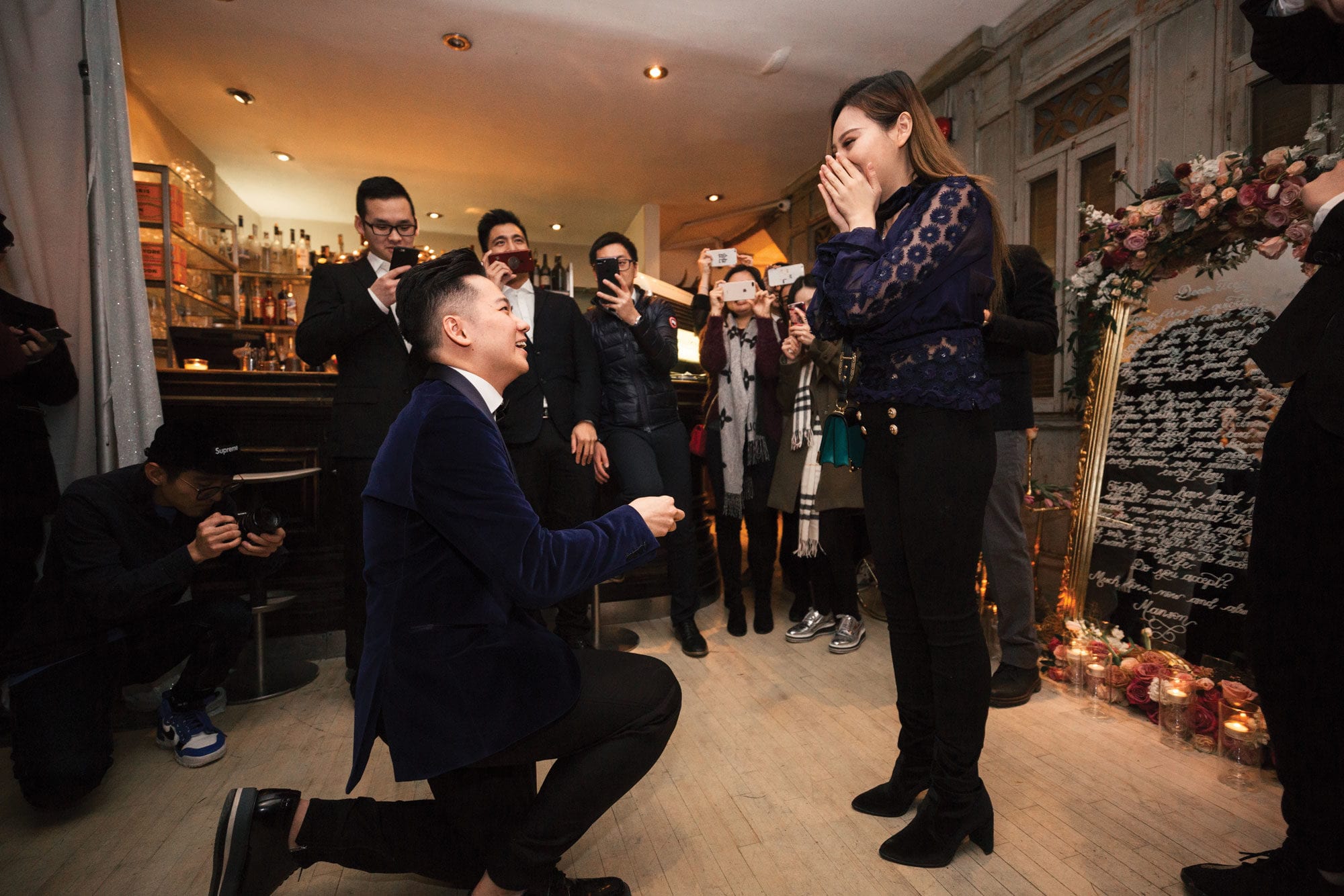 When Manson came to Canada six years ago to study business at Trent, he didn’t know many people. The school’s Chinese Student Association hosted a festival, where he met Icey, and the two went for a friendly breakfast. Manson knew early on that she was the one, but he waited until they both graduated to pop the question.

He spent a month organizing a proposal inspired by Maroon 5’s “Sugar” video, in which Adam Levine drives across L.A. in a vintage Lincoln to surprise couples at their weddings. The band sets up behind a white curtain and starts playing when it drops. As a fellow pop musician, Manson figured it would be a fun concept to replicate.

He planned the event for New Year’s Eve, when his family would be visiting. Icey thought they were all celebrating together at Wish restaurant. When she arrived, servers escorted her to a full-length mirror to see the special menu. Instead, it had a love letter from Manson copied out in calligraphy. Behind her, a curtain fell to the floor, revealing Manson and his band. He poured his heart out in a song he’d written just for her, which ended with, “Oh baby, Icey, would you like to marry me?” 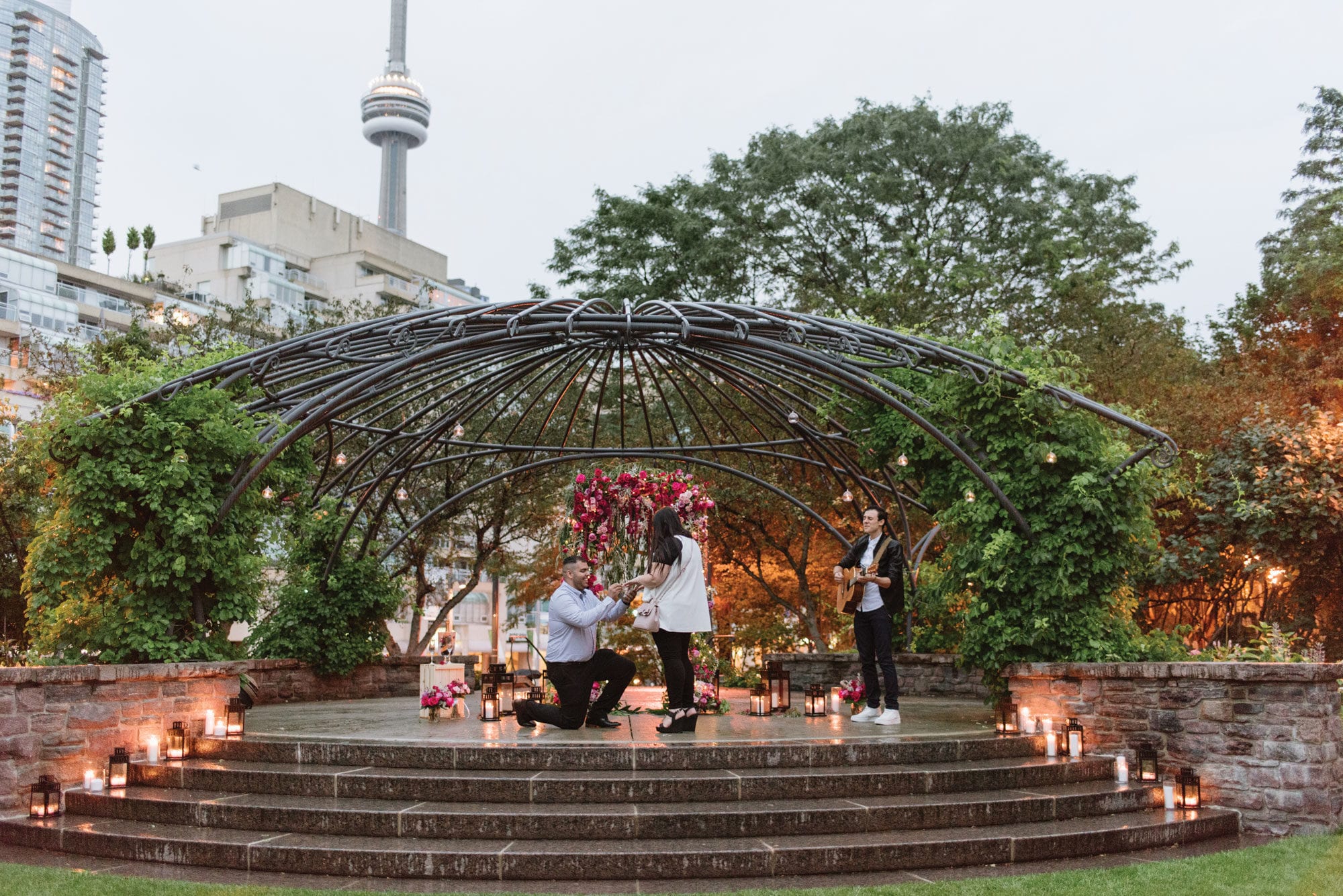 Denise and Carlos met while they were working part-time at a Portuguese bakery in Etobicoke. They were 15, and Carlos had a crush on her. He spent four years asking her on dates, but she kept him in the friend zone until, one day, his tenacity paid off. They had dinner together at a Portuguese restaurant, and they’ve been together ever since.

Carlos wanted the proposal to be a full-afternoon affair. He purchased a brand new Audi for the occasion and drove her to a helicopter pad for a surprise ride over the Harbourfront. When she asked what the occasion was, he told her he’d won the tickets at work, but she was suspicious. After a sushi dinner near the water, he nervously asked if she wanted to go for a walk. “That’s when I knew something was up,” she says.

They strolled toward the Music Gardens, and, when Denise caught a glimpse of the rose-covered archway lit up with candles, she burst into tears. A guitar player appeared and started strumming John Legend’s “All of Me.” Carlos got down on one knee and told her he wanted to spend the rest of his life making her happy. “It was like a movie,” she says. 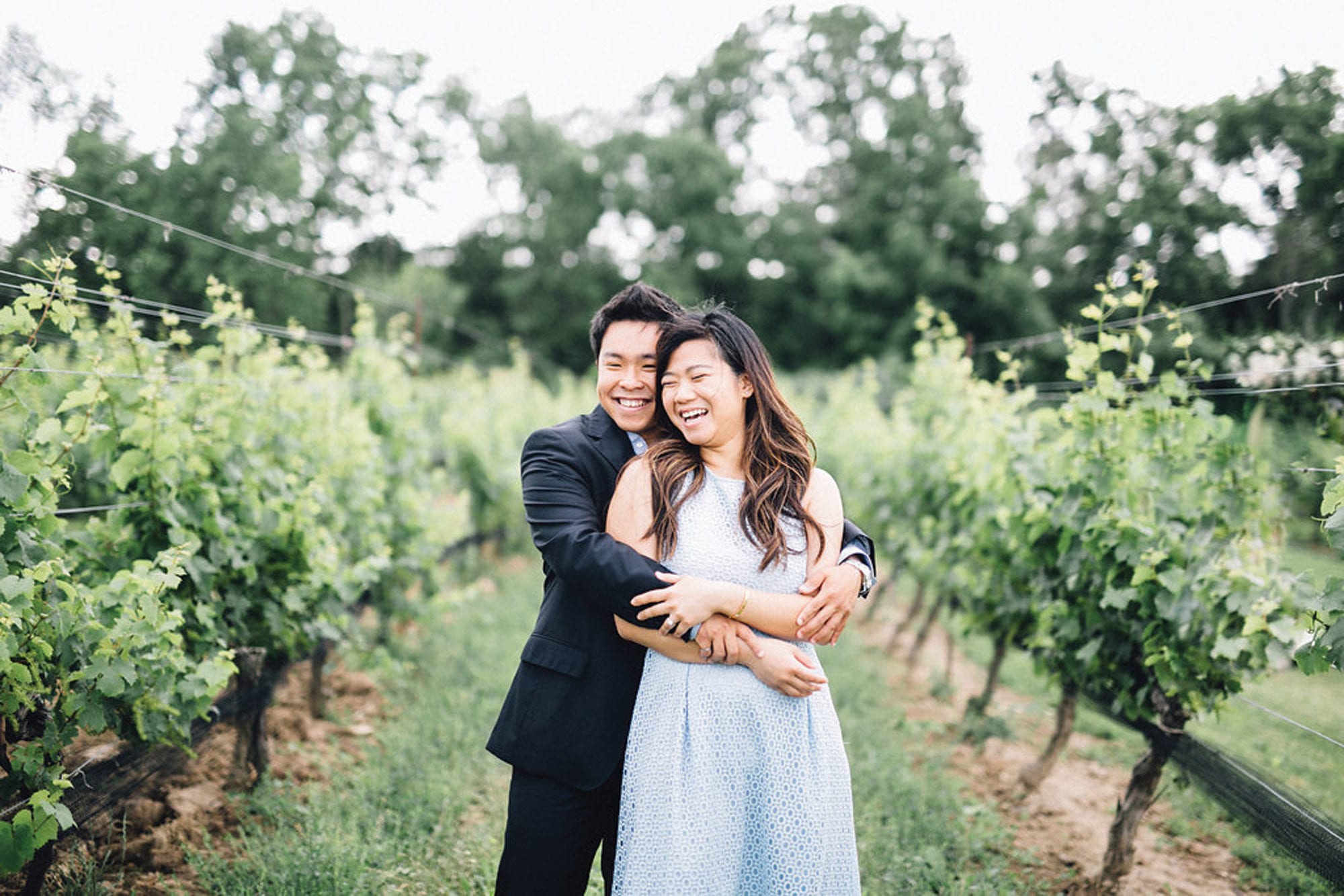 Adrian and Jannike talked about getting married throughout the entirety of their six-and-a-half-year relationship. Jannike knew the question was coming—at one point, she even searched the house for a ring—but she thought he might ask on their upcoming trip to Japan. When he told her he was taking her on a wine tour, she didn’t suspect a thing.

Adrian spent the better part of four months planning the proposal. On the appointed day, they drove two hours to the Vineland Estates Winery. Their guide escorted them to the grapevines and abruptly walked away, which Jannike thought was odd. “I figured it was just a bad tour,” she says.

Adrian led her to a clearing in the vineyard. There was an archway draped in flowers and pink fabric, and rustic barrels covered with photos chronicling their relationship. A violinist emerged and started playing Pachelbel’s Canon, the song she always imagined herself walking down the aisle to. Laughter and happy tears ensued when he got down on one knee, and in a serendipitous turn, the rain held out until after she said yes. 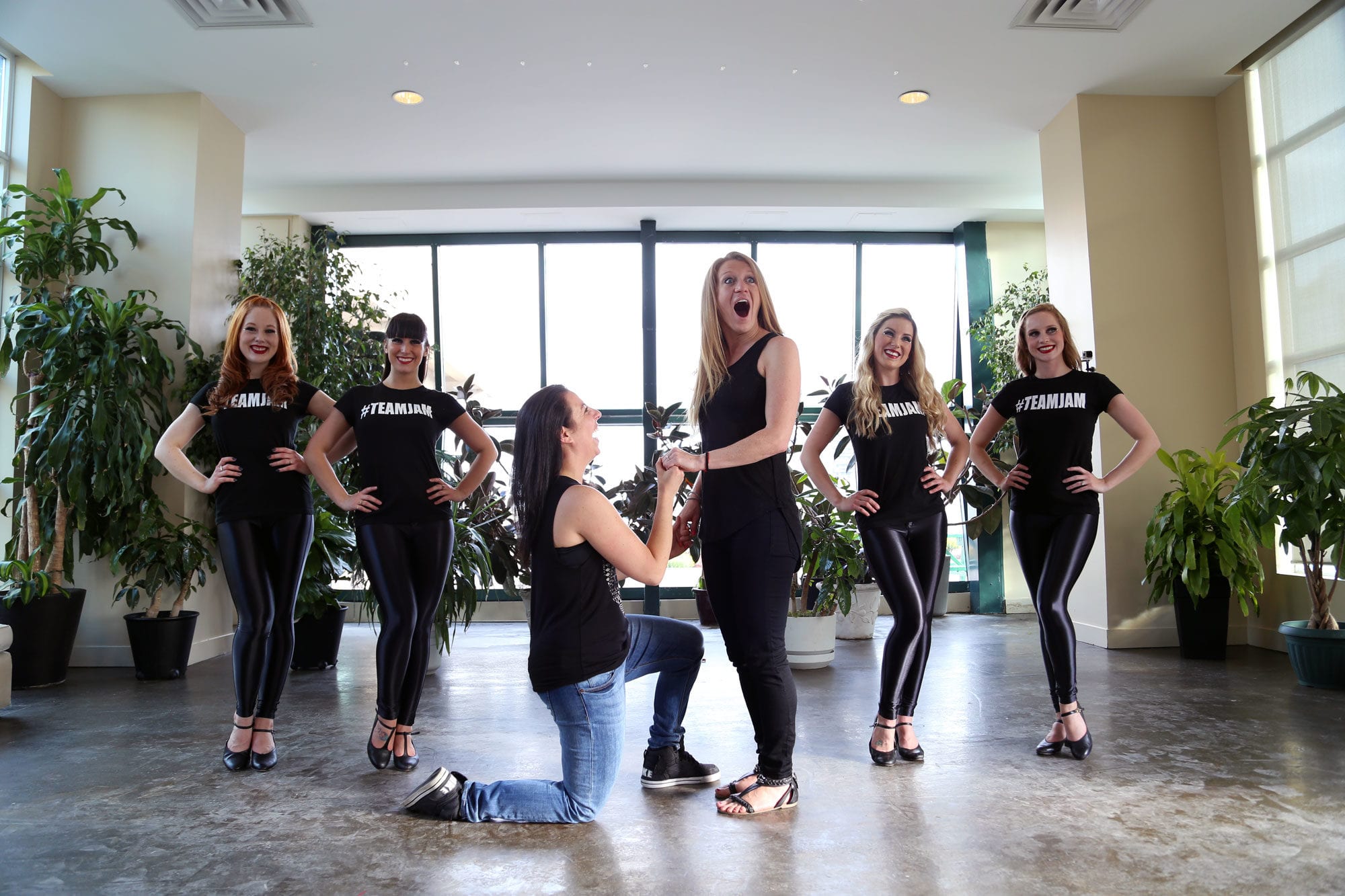 Justine and Melanie were set up through a mutual friend in 2012. Naturally, they looked each other up on Facebook beforehand and both decided they weren’t each other’s type. “We would have swiped away from each other if it was Tinder,” says Melanie. When they met up at Toronto Pride, however, they quickly changed their minds.

After a year and a half of dating, Justine started planning a Beyonce-inspired flash mob proposal. She recruited a team of dancers to perform along to “Single Ladies” and had custom T-shirts made for each one: the front said #TeamJam, their self-appointed couple nickname, and the back spelled out, “Will you marry me?”

On the day of the proposal, Justine told Melanie they were having dinner at her brother’s condo. He met them in the lobby and escorted them up to the rooftop patio for a glass of wine. When they passed by the party room, Justine waltzed in and asked what the dancers and film crew were up to. (She knew, of course.) The dancers said they were making a music video and invited Justine and company to stick around.

Melanie was mortified and apologized to the crew for interrupting their shoot. Just then, the music came up, the dancers started dancing and Justine gave Melanie a kiss. She told her she loved her and got down on one knee. “I was in total shock,” says Melanie, who never suspected a thing.