Our wedding was postponed so we got dressed up and played Jeopardy! instead

Our wedding was postponed so we got dressed up and played Jeopardy! instead 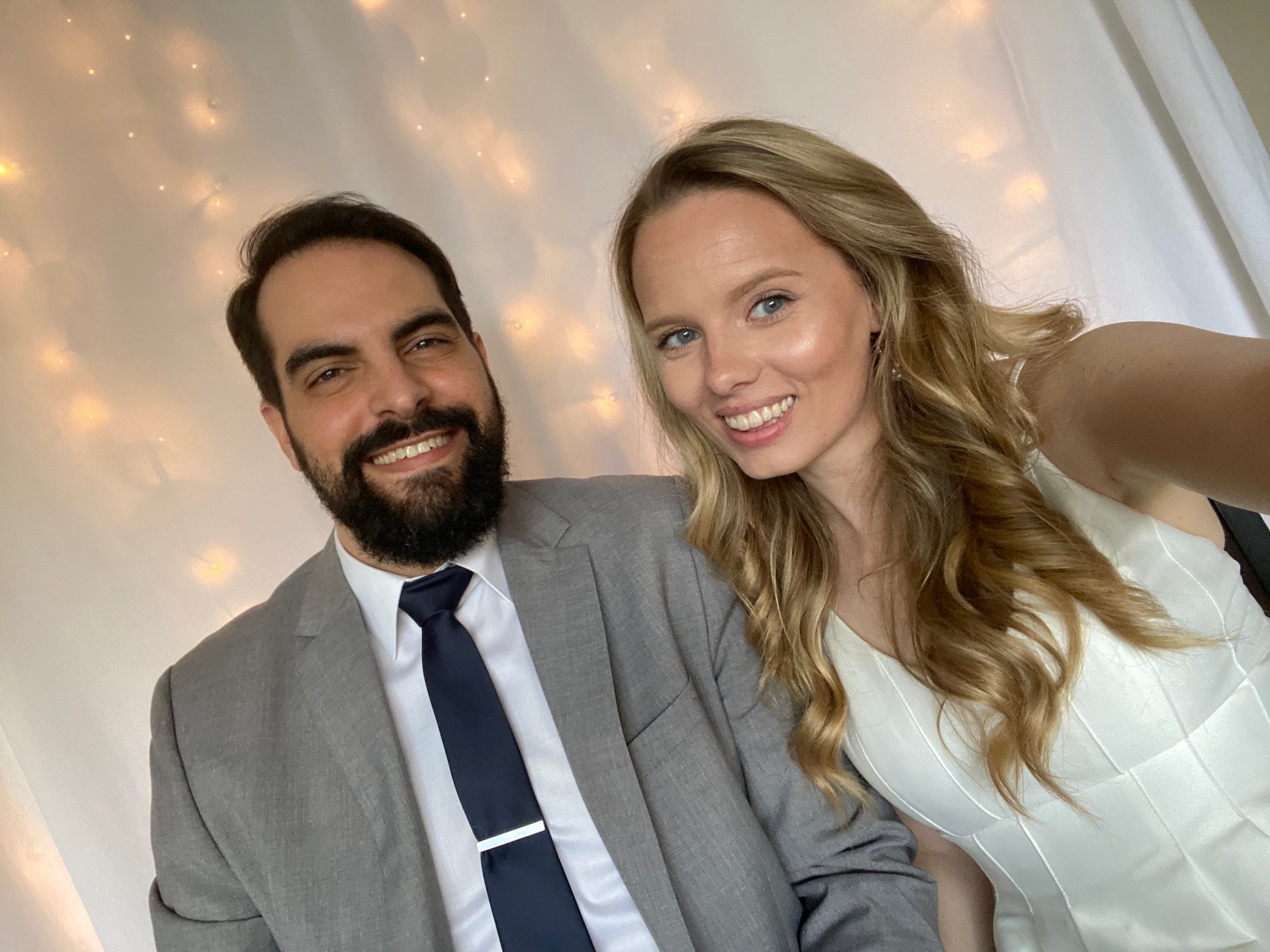 Matt Cantwell, a high school teacher, and Megan Wright, a visual merchandising manager, postponed their April 25 wedding due to Covid-19. Instead, the couple put together a playful mock wedding video and went on Zoom to host a trivia night with their friends. Here’s how everything came together.

Megan: Matt and I met in summer 2015 through our mutual friend Coretta when she invited me to a cottage weekend with her group of college friends. But we didn’t really hit it off at first.

Matt: Meg likes to say that I ignored her. It was one of those things where we were just there to have a good time. I wasn’t really paying attention.

Megan: At one point, me, Matt and Coretta were talking about the musical Once, which was showing in Toronto. We all wanted to go. So a week or two later, I started a group chat about getting tickets to a matinee. Coretta realized she couldn’t make it, so I messaged Matt privately. We made plans to have brunch before the show.

Matt: We met at Irish Embassy. When we sat down, just the two of us, we hit it off right away. And that’s what got the ball rolling. After the show, we got drinks on Queen Street, then we ended at the Rivoli to play pool.

Megan: I don’t remember much about the play because halfway through we started holding hands and I got nervous and stopped paying attention. Four days later, Matt told me, “I wasn’t looking for a girlfriend. But is it too soon for me to ask you to be my girlfriend?” Neither of us were looking for a relationship, but we just found each other. We both had the same values and wanted the same things in life. 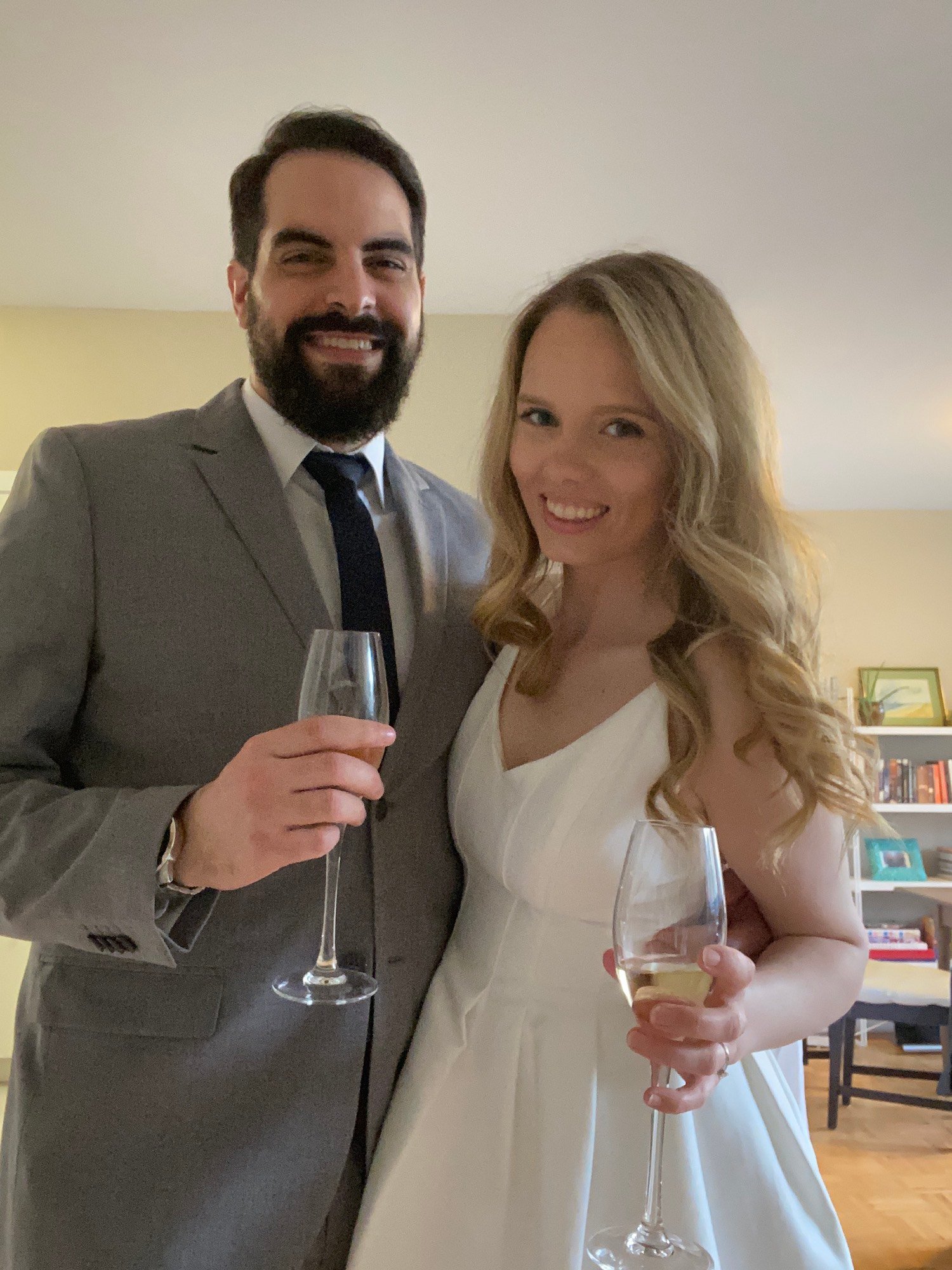 Matt: Meg’s humour definitely caught me. She was always easy to talk to. She has a great laugh, a great smile and she’s really warm and accepting. We’ve always been goofballs around each other. We’ve never hidden who we are or been ashamed of acting silly.

Megan: Matt has the gift of gab. He’s such a smart person, and he’s so good at talking to strangers. Our whole relationship has been so easy and laid back and funny and silly and comfortable. I’ve definitely made him a little more weird.

Matt: By the summer of 2018, I’d been thinking about popping the question for a while.  Since I get summers off, I spent most of August 2018 making a scrapbook. I found old pictures of us together and little mementos, like the program from Once, sports tickets and movie stubs.

Megan: One evening in November, I came home from work and Matt had made a nice dinner. After we finished, he said, “I made you something.” And he went into the bedroom and grabbed the scrapbook. I thought it was so sweet. I said, “This is like a Christmas present. Why are you giving this to me now?” Halfway through, in my head, I’m like, What’s happening? I noticed Matt was awkwardly shifting around.

Matt: I was shifting because I had hidden the ring in our couch but I couldn’t find it. I thought it had fallen underneath and I was having a bit of a panic. But I’d found it by the time she got to the end of the book. It said, “Our story is just beginning.” Then she lifted a flap and underneath it said, “Will you marry me?” I opened the ring box and officially proposed. She looked at me and she was just like, “Really? Me?” 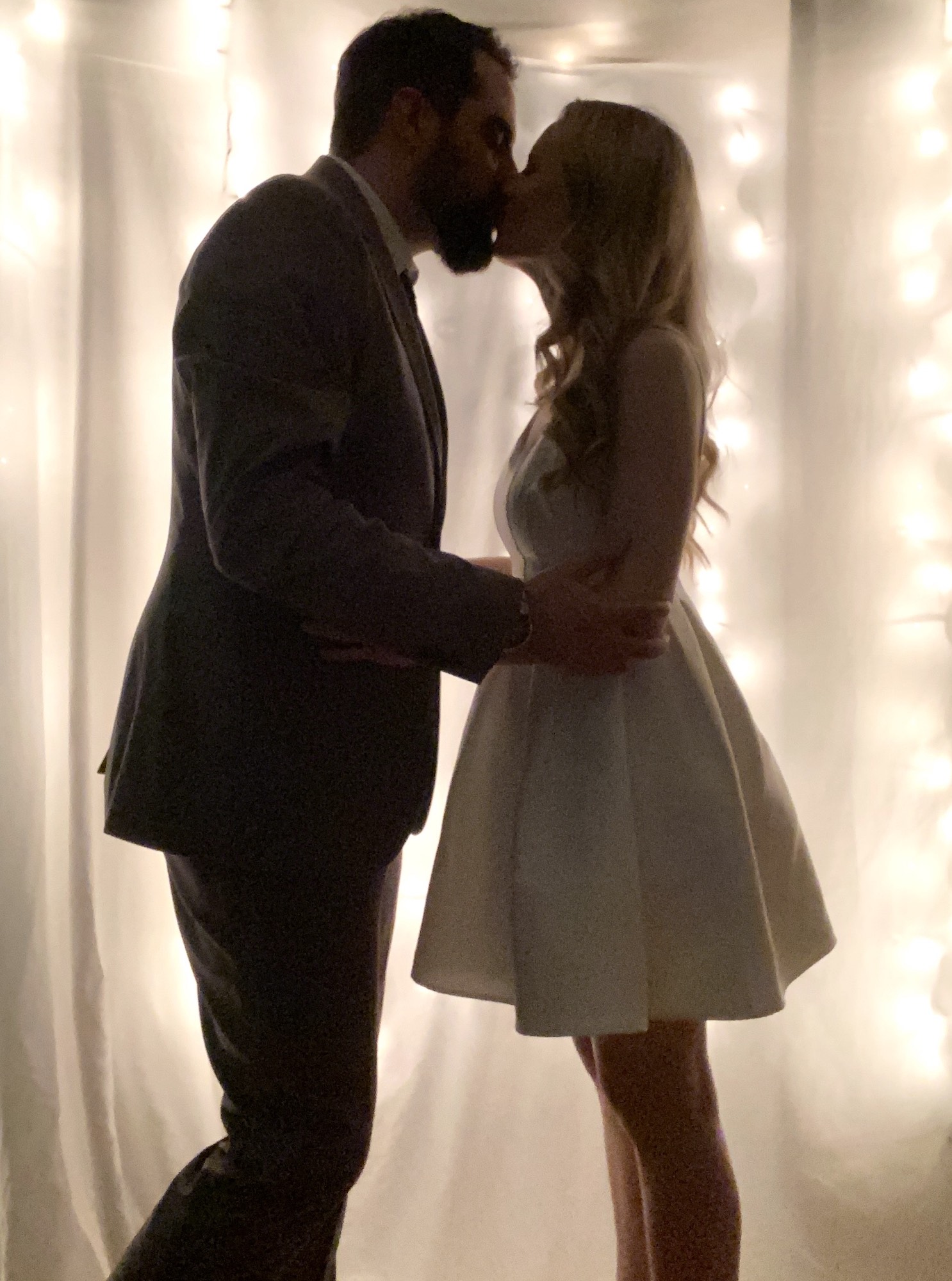 Megan: I cried right away. I’m glad he didn’t do it in public. We wanted to have a spring wedding, and a four-month engagement felt too soon, so we decided to do it on April 25, 2020. Matt has a big Greek family, so our guest list was around 230 people. We planned a ceremony at a Greek Orthodox church in Parkdale, and our reception would be at the Eglinton West Gallery.

Matt: Greek Orthodox wedding ceremonies are fairly long, about an hour and a half. We wear crowns and do a lot of things in threes. The priest will have the best man and maid of honour shift the crowns back and forth on our heads thrice. Then we walk around the altar three times.

Megan: By early March, we had pretty much everything set, aside from seating charts. Around the time things were getting touch-and-go with Covid, we had a call booked with our coordinator. She said, “We’ll make a plan A and we’ll make a plan B.” Plan A was the wedding going ahead as normal and plan B was postponing.

Matt: The last thing that we did was we sat down with our DJ and we went through all of our songs. A few days after that, on March 11 the NBA had cancelled the rest of their season.

Megan: It just kept getting worse and worse. I thought, There’s no way this is happening. We called up our coordinator and told her we were going to postpone. She was really accommodating. Our venue let us rebook to a Friday in July. But we still don’t know if that’s going to happen. We might have to postpone again.

Matt: In mid-April, two weeks before our original wedding date, one of my groomsmen suggested that we do something special, like a Zoom call to mark the date.

Megan: One of my bridesmaids had said the same thing a few days before. We talked about it and thought it would be a great idea. Matt got on his computer and made this funny little invitation. It was better than our actual invitation.

Matt: We decided to keep it simple, so we just invited our wedding party and our parents. It was about a dozen people. We sent everyone the invitation by the end of that weekend.

Megan: We’ve been hosting trivia nights on Zoom with our friends, and Matt’s been using his teacher skills to make these really cute PowerPoints. So I suggested we make a Jeopardy! game. We wrote down questions about the bridal party and TV weddings.

Matt: I woke up on our wedding day and had the idea to film myself doing all the things a wedding videographer films the morning of a wedding, like hanging out with the guys and walking in the park. But I would be doing it all by myself. I wanted it to be funny and ridiculous. I told Megan my idea. She thought it was great but that we should make it kind of serious, like a mock video. I have a DSLR, so that morning, we checked out some other wedding videos that other people did to get ideas. We spent the day filming random things in our house. I got really into it.

Megan: Matt took, like, 13 different shots of flowers. We got our dog, Mickey, involved too. He played an important role as our only guest. One of my bridesmaids, Rachel, walked all the way from her place at Queen and Spadina up to High Park to deliver a bottle of champagne and some champagne glasses to us, which was so sweet. She said, “I just wanted to make sure you have something to drink tonight.”

Matt: Later on, we got an LCBO delivery of another bottle of champagne from one of my groomsmen. For the video and the Zoom call, I wore a regular suit.

Megan: I wore a white dress that I had planned to wear later in the reception for dancing. We made this cute little backdrop with one of our bedsheets and some Christmas lights, and we set our kitchen table in front of that. We started at 7 p.m., chatting with people as they came online. And then we jumped into the Jeopardy! game. 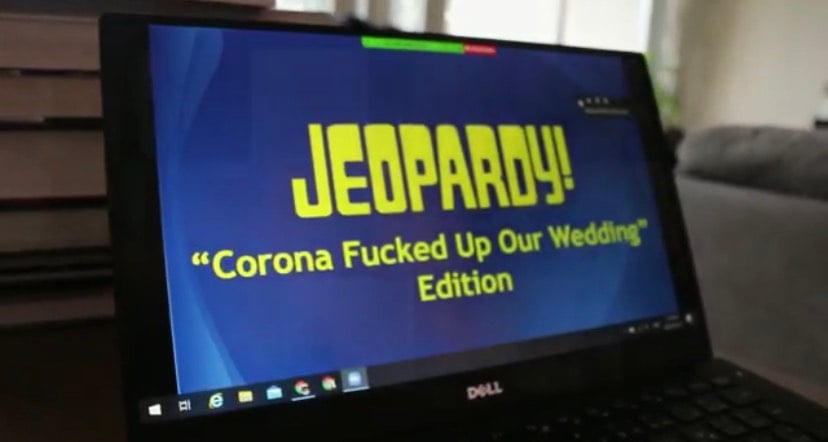 Matt: That went on for about an hour and a half.

Megan: Everyone was laughing. People were having a great time. Everyone got really drunk. It’s really easy to get drunk when you’re on a Zoom call.

Matt: Everyone got dressed up, too. Some of the guys sent me pictures afterwards, and they had on suit jackets, ties and dress shirts with board or bike shorts. It was half-black tie.

Megan: After Jeopardy!, we went person by person, and everyone said something cute and sweet.

Matt: My friends mostly made fun of me. That’s the relationship that we have.

Megan: One of my friends told a funny story about how, after that first date with Matt, I came home and said, “I have met my husband.” They all thought it was crazy but clearly it worked out for me.

Matt: We were so appreciative. It’s easy to get on a Zoom call. But it was nice of people to say some words and have a good time. It was very, very touching and it made a really unfortunate situation a little bit better.

Megan: It felt like a special day, even though it wasn’t exactly what we envisioned. The Zoom call ended at around 9:30 p.m. The 11 people on Zoom made us feel so happy and so loved that I can’t even fathom what it would have felt like to be in a room of 200 on our wedding day.

Matt: After that, we put on our song, “Lover” by Taylor Swift,  and had our little first dance, just the two of us, and we filmed that for our video. It was nice with the makeshift backdrop because it had grown dark by that point.

Megan: It took about two days to pick out the best clips for our video and plop it all in there. We sent it off to our parents first and the wedding party, and then we posted it on Instagram. It was so sweet because all those people who would have been at the wedding got to see it and got to be a part of the day. One person said, “This is the best thing I’ve seen all quarantine.”