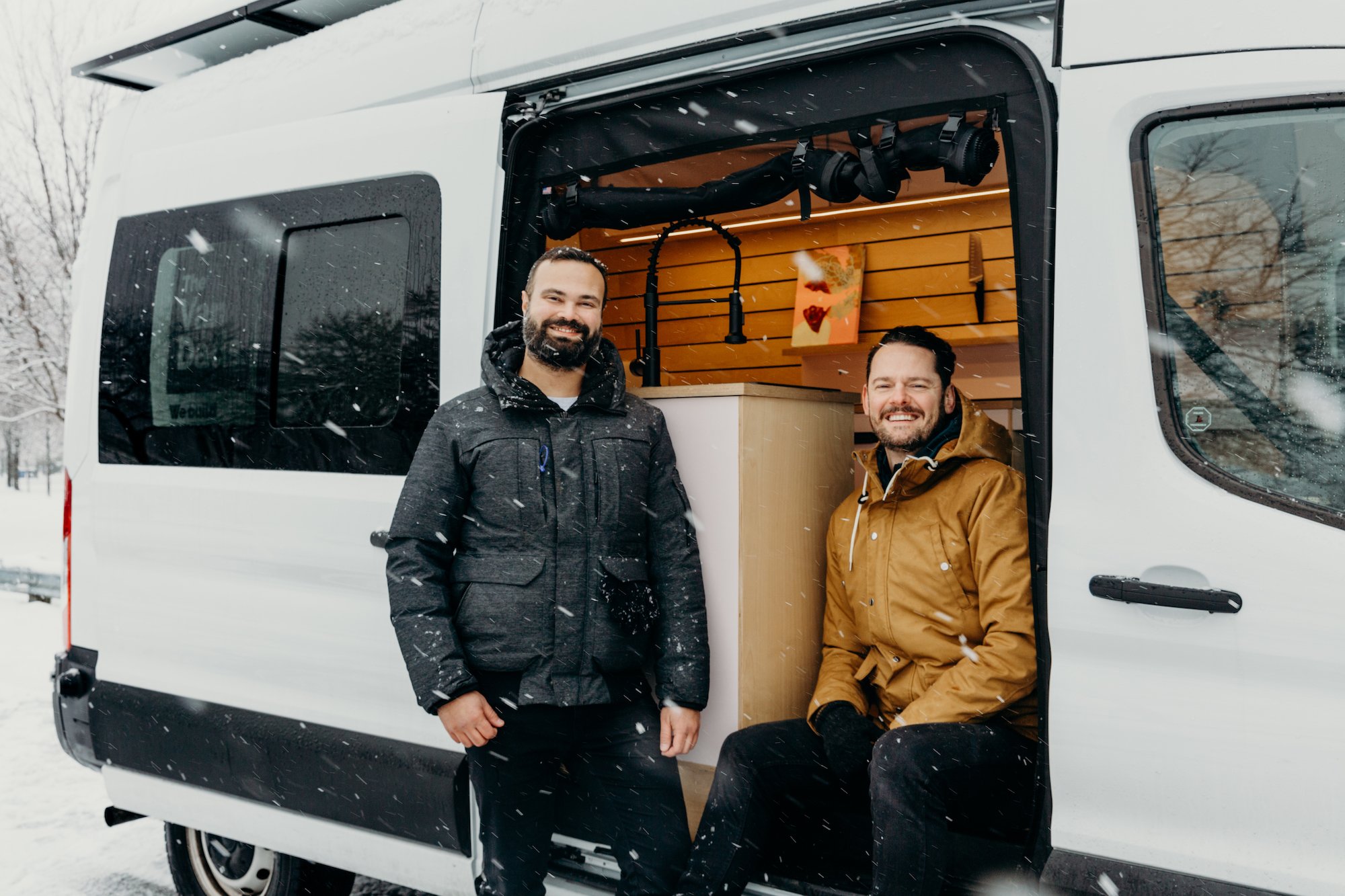 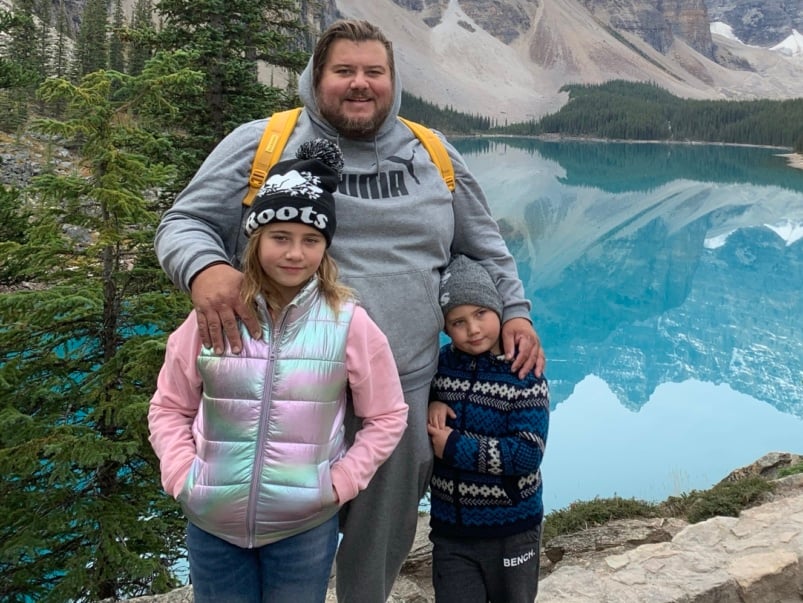 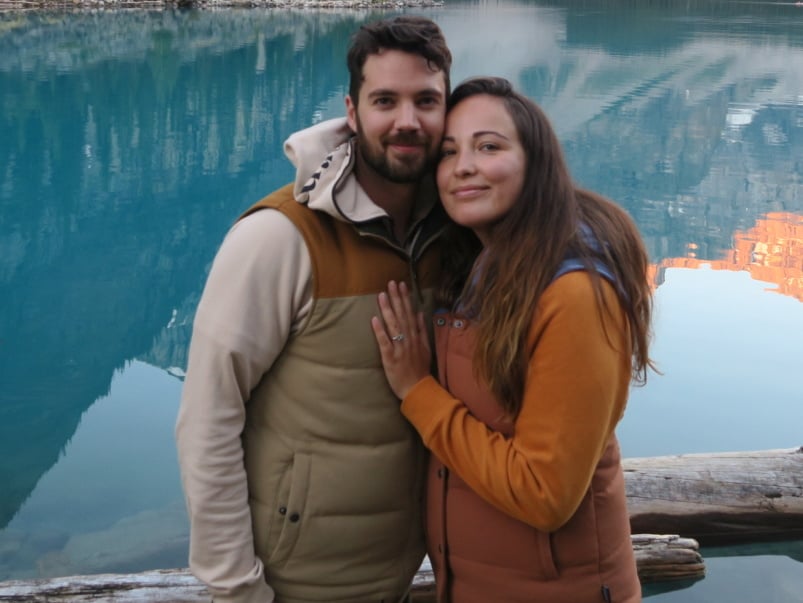 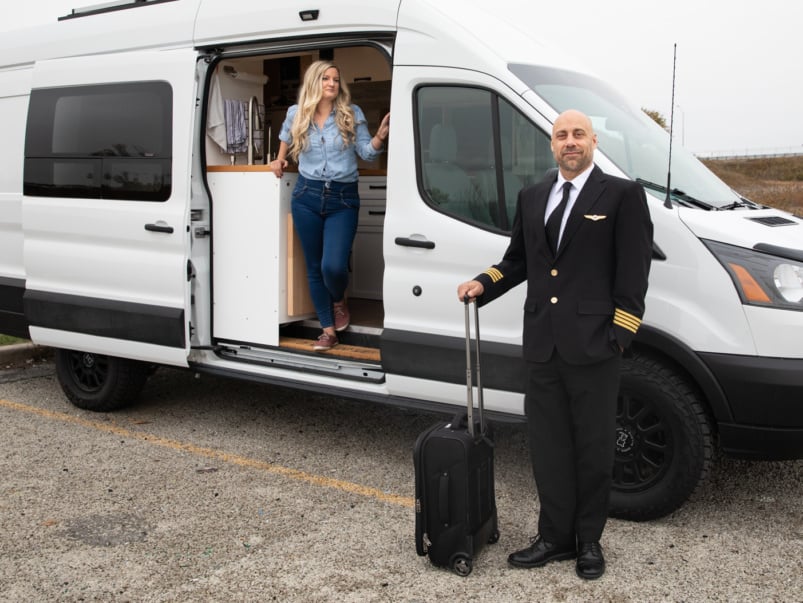 In the fall of 2020, Gui Figueiredo, a lawyer turned hotel manager, and his partner, Jeremy Vandermeij, an interior designer and a co-founder of the DesignTO festival, retrofitted a Ford Transit delivery van and took off for a two-month excursion to Tofino and back. The trip was the couple’s first foray into van life, and also the birth of their new service, the Van Dads, which offers custom kitted-out vans. Here’s how they got started.

—As told to Peter Saltsman

Jeremy: “My partner, Gui, moved to Canada in 2018. He was a lawyer for the federal government in Brazil, and he came to Canada for a new adventure, and because it’s a better place to be queer. He’s a big traveller and has visited more than 40 countries.

“We entered a relationship in July of 2019, and after a few months of dating I took him camping in Presqu’ile Provincial Park. He enjoyed being in nature, but didn’t really want to sleep in a tent. He did like sleeping in my parents’ old pop-up pull trailer that we had brought along with us, though. We were both intrigued by the idea of travelling in a van, and that’s when we thought about buying our own camper van to take out on a long adventure.

“The onset of the pandemic put the kibosh on our plans but in September of 2020, we decided we would head out on a trip the following summer. We were both so excited. We were like, Let’s get out of the city and quit our lives. I knew it was going to be bad in the winter, trapped in my 650-square-foot Parkdale apartment with nothing to do but sit on the couch and watch TV and work. Restoring a van and planning a trip would be a fun project and something to look forward to. 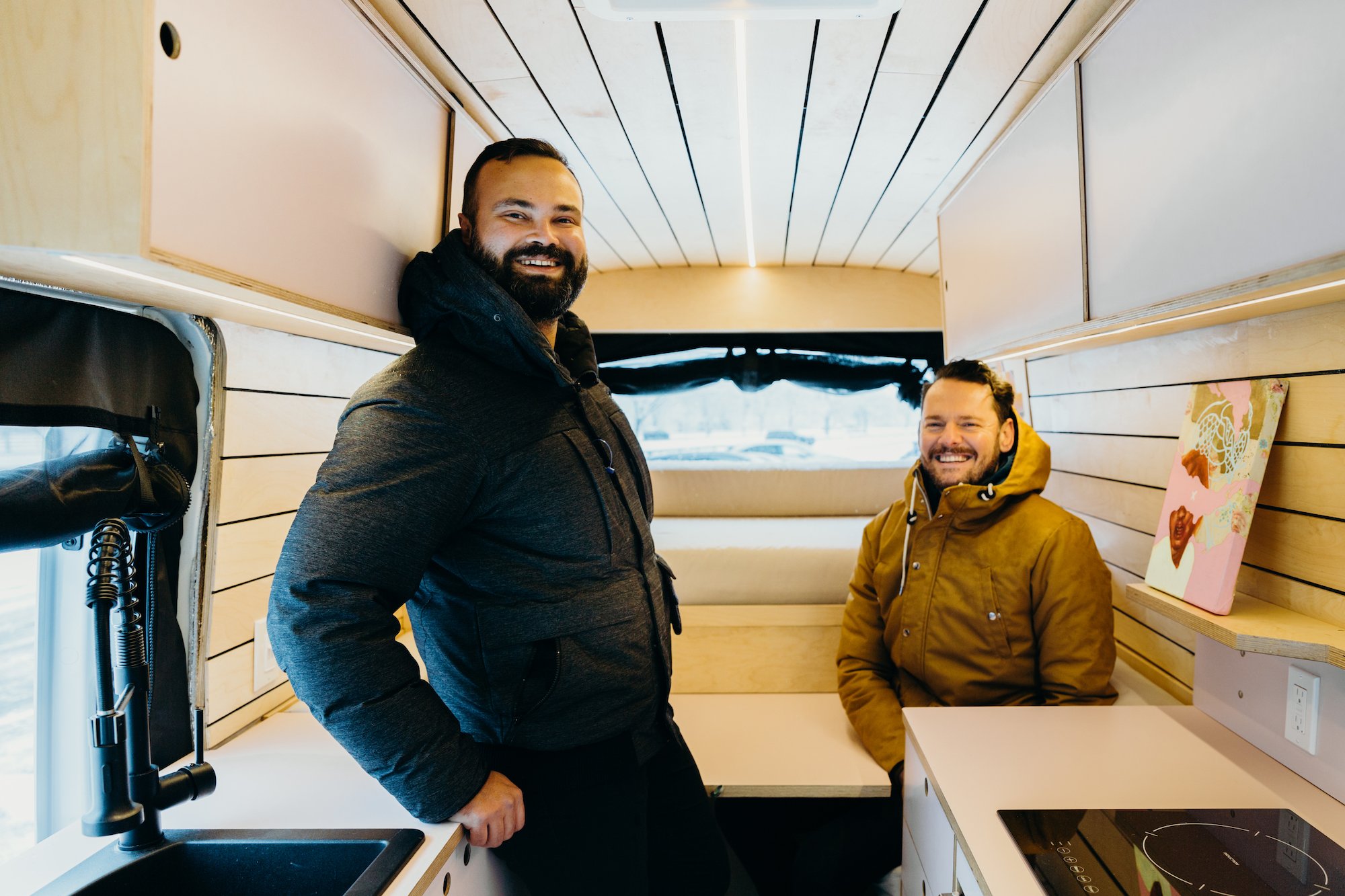 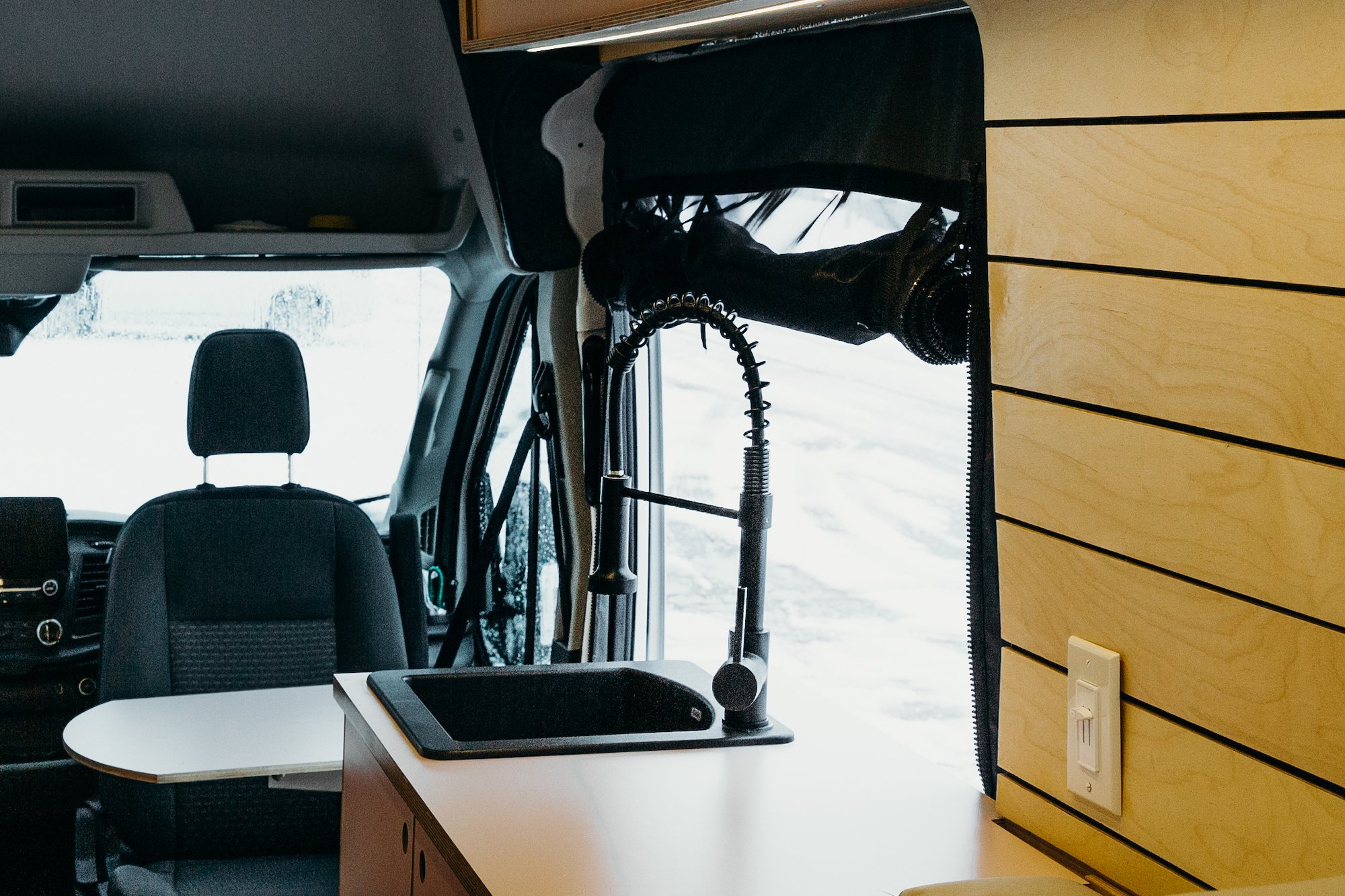 “We’re both giants—I’m six-four and Gui is six-two—so we wanted to find a van that could accommodate our heights, which pretty much only left us with the 20-foot long and nine-foot high Ford Transit. We got one from Yorkdale Ford for $50,000 and started building it out in October of 2020.

“Our hope was to build a van that we could travel and live in and comfortably work from. We wanted to make sure that the interiors were sturdy and that the van stood up to long distance travel. I’m obsessed with designing for small spaces. I’ve always lived in small apartments and done a lot of woodworking, so it was super exciting to design a layout for the van. Aesthetically, I had seen a lot of vans online that were either made with a very DIY spirit—using materials from big-box hardware stores—or highly engineered by an RV company to look like the inside of an airplane. I wanted to find the middle ground: something that was thoughtfully designed and also felt homey.

“We built the van in my parent’s workshop in Scarborough. Gui and I wanted to keep the floor plan open and chose baltic birch for the interior siding, cabinetry and countertops. We didn’t include a shower stall, because it would take up 20 per cent of our space for something we’d use for twenty minutes a day, and it would strain our water supply. We figured that we’d alternate between camp sites with shower facilities and boondocking, which is camping on public land. 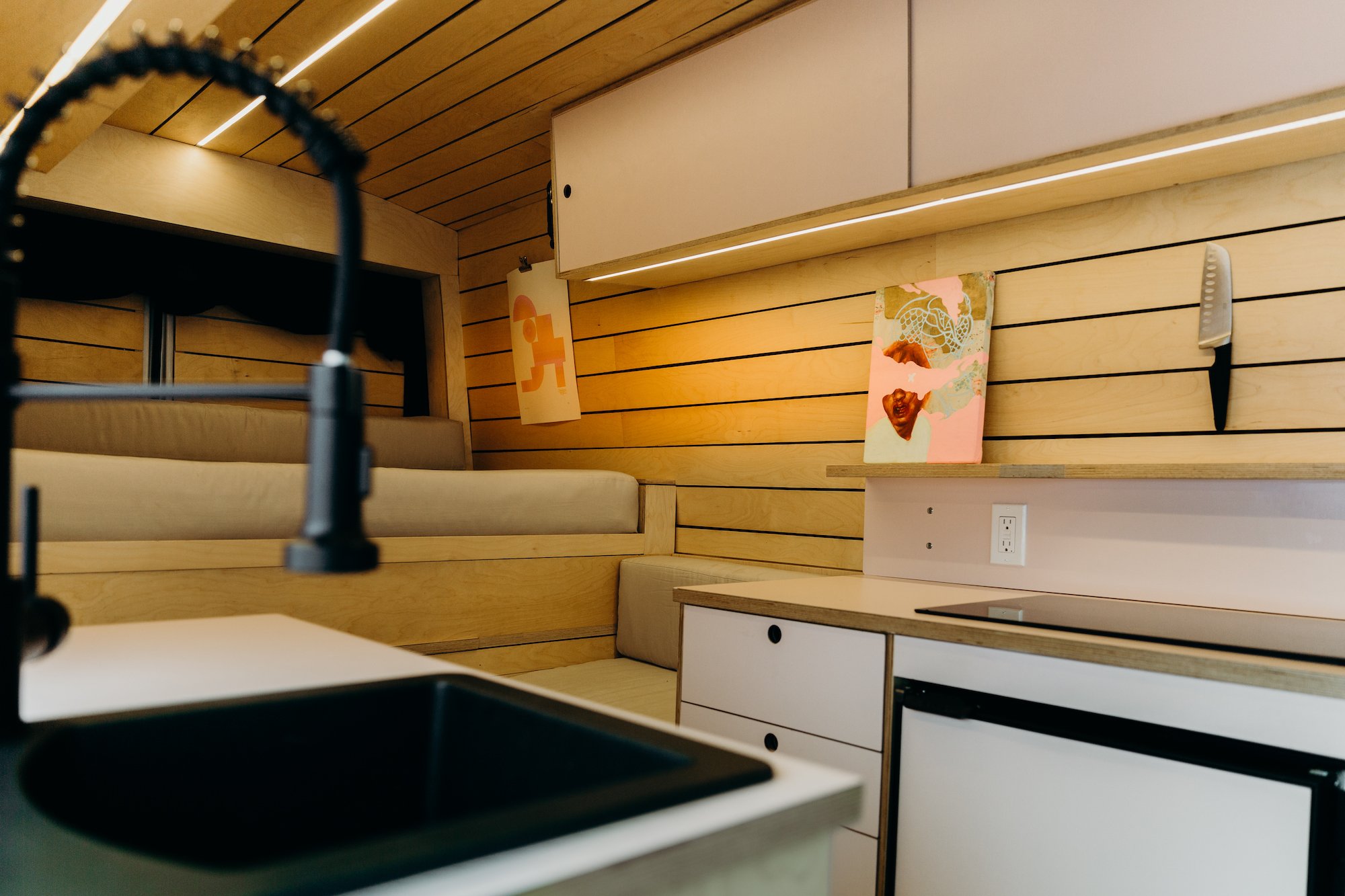 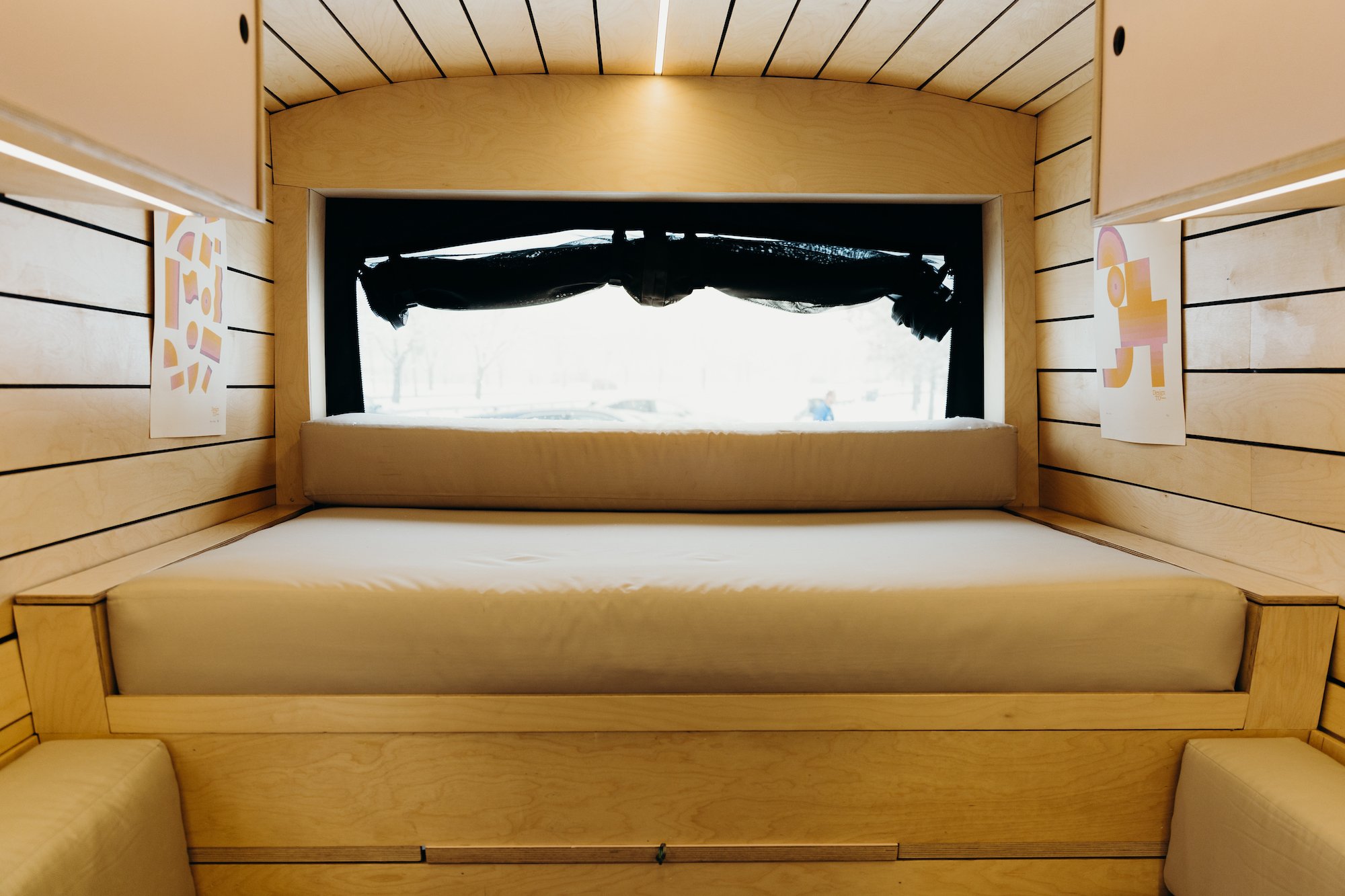 “We designed a mechanism that pulls our mattress out over the counter, so we could fit a queen-size bed. I love cooking, so we added a big kitchen with a two-burner cooktop and a second counter so two people could prepare a meal together. The van also has a cellphone signal booster and an internal WiFi system.

“As we were building out our van, we started thinking about how many other couples were likely doing the same thing. I’m an interior designer and arts administrator by trade, and I’m also interested in business management; I’m currently finishing up a master’s in strategic foresight and innovation at OCAD U. I started getting into the economics of what would be required to make a service like the Van Dads work. I thought, We could work with clients to help them design vans using 3D models and build the vans using digital manufacturing tools.

“We were done with our van by July of 2021, which is when we headed out on our first trip to Tofino and back for two months. The van is 60-square-feet, which is smaller than most suburban walk-in closets. It was my first time sharing such a small space with Gui. We began our trip travelling through Ontario provincial parks alongside my family: my mom and dad, my two siblings with their partners and kids, all in their respective vehicles. It was a really nice to spend time with our family. 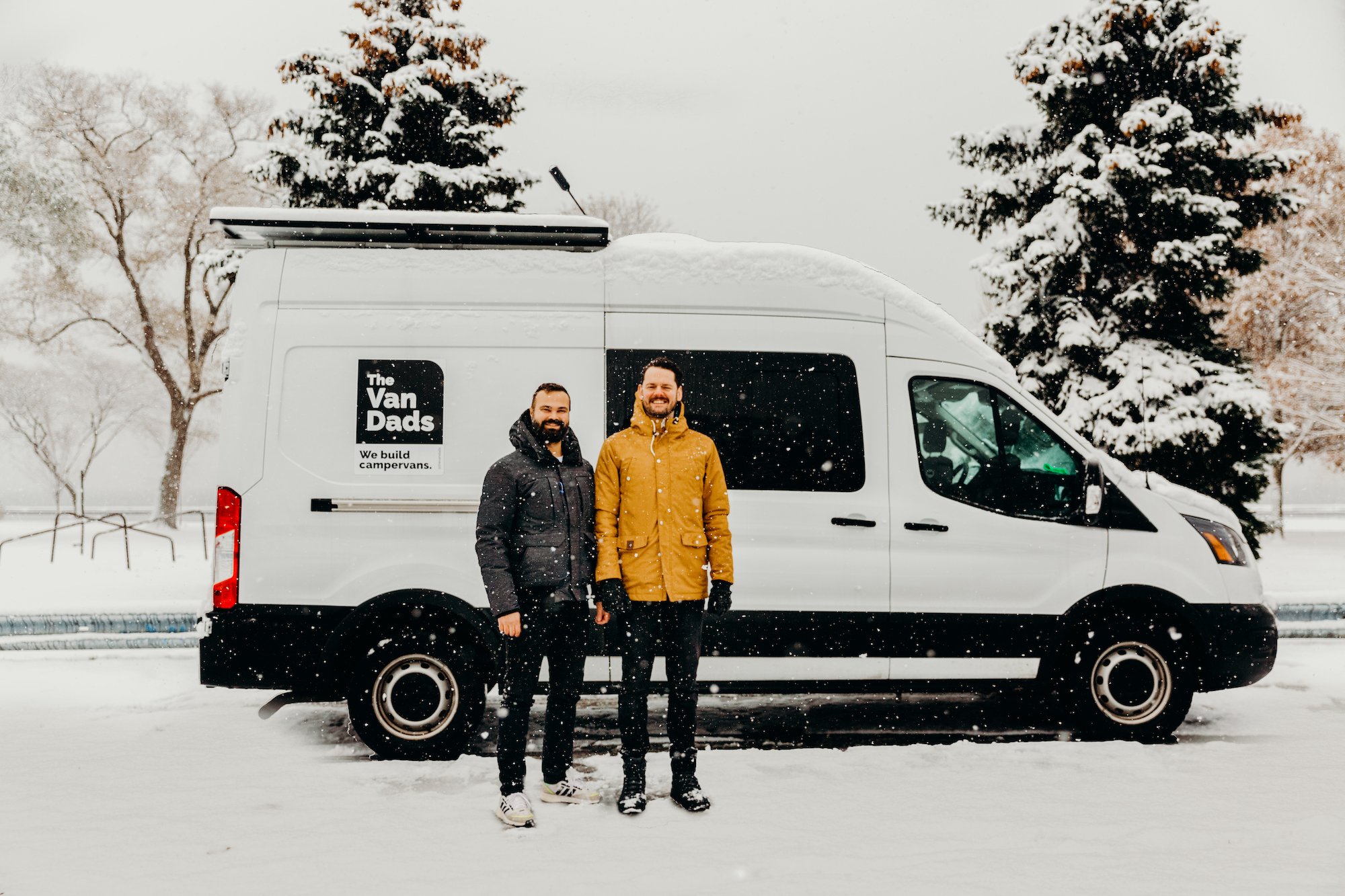 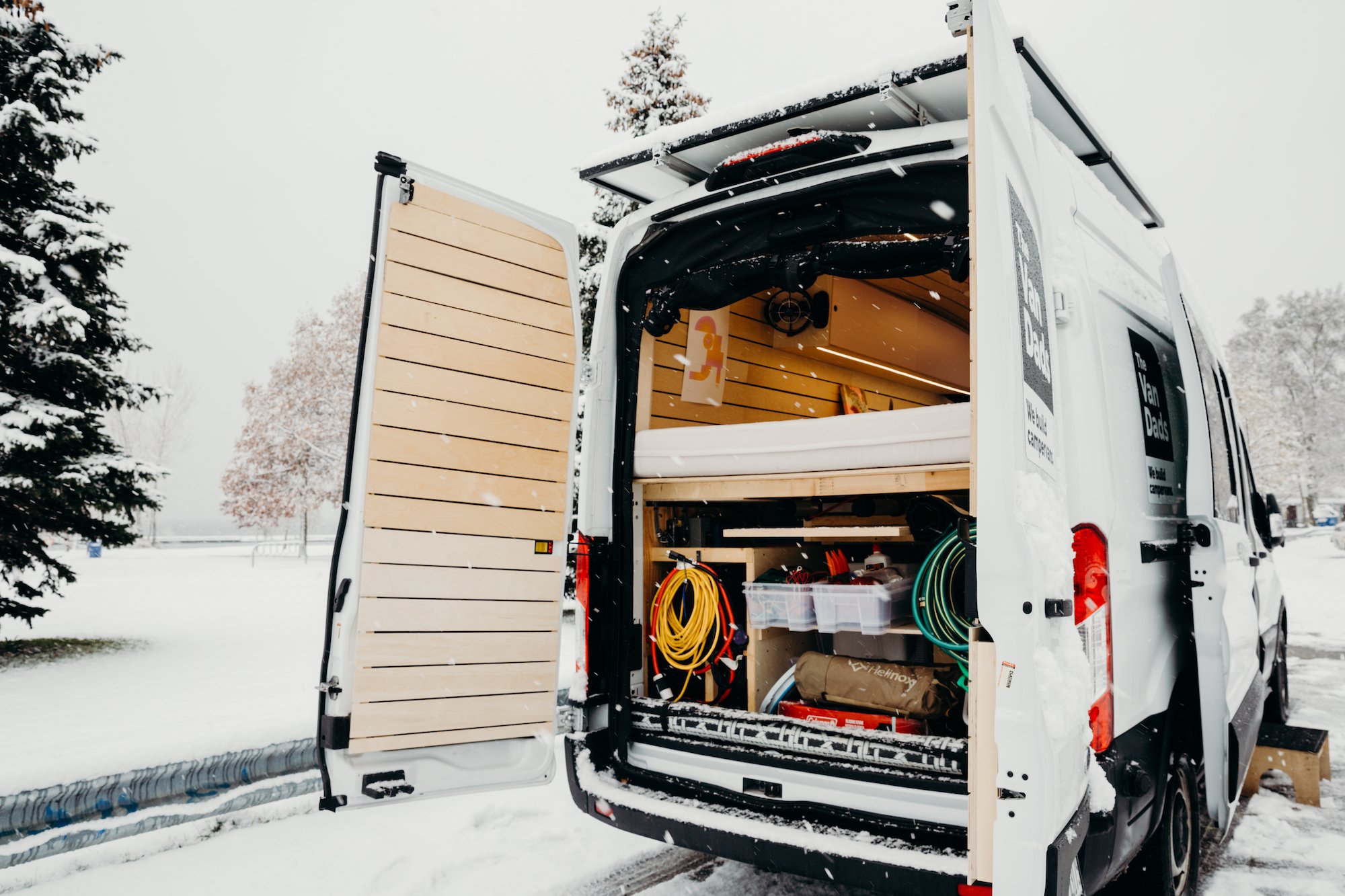 “We parted ways with our family at Sleeping Giant Provincial Park near Thunder Bay. Then, we zipped across the prairies in three days, covered in a haze from forest fire smoke the whole way. We stopped in Calgary for a few days, and used an app that allows you to take care of people’s pets and homes in exchange for free accommodation. We ended up taking care of three high-maintenance geriatric dogs who required constant care, but we still had time to explore Calgary on electric scooters. Next, we went to Banff, and stayed in Vancouver for a week, docking in an RV park that was more like a parking lot. But it was clean, close to the city, the people were lovely, and it was very affordable. Finally, we went on to the rainforests and misty beaches of Tofino.

“During the cross-country trip, I saw a huge change in my ability to be present. For the first time in years, I reduced my screen time by about 90 per cent, spending my time exploring our surroundings. After being caged in our apartments for months on end, we felt alive in a way that we hadn’t in a long time. It was a great experience for me and Gui, and it brought us closer together as a couple. We felt incredible when we returned. We both went back to our full-time jobs, and I went back to school. We also dove right back into the Van Dads, finishing the build of the website, our business plan and service model. 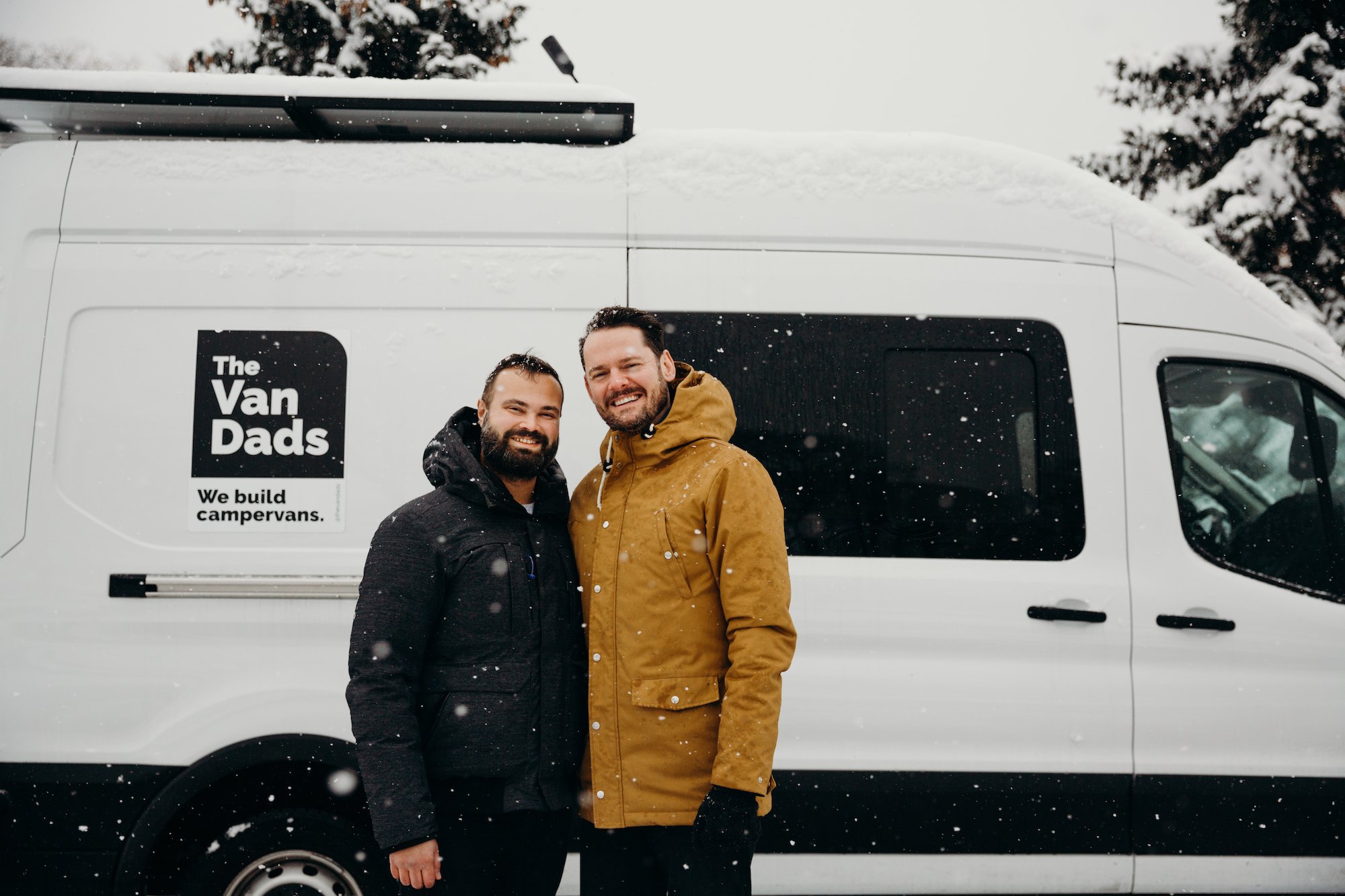 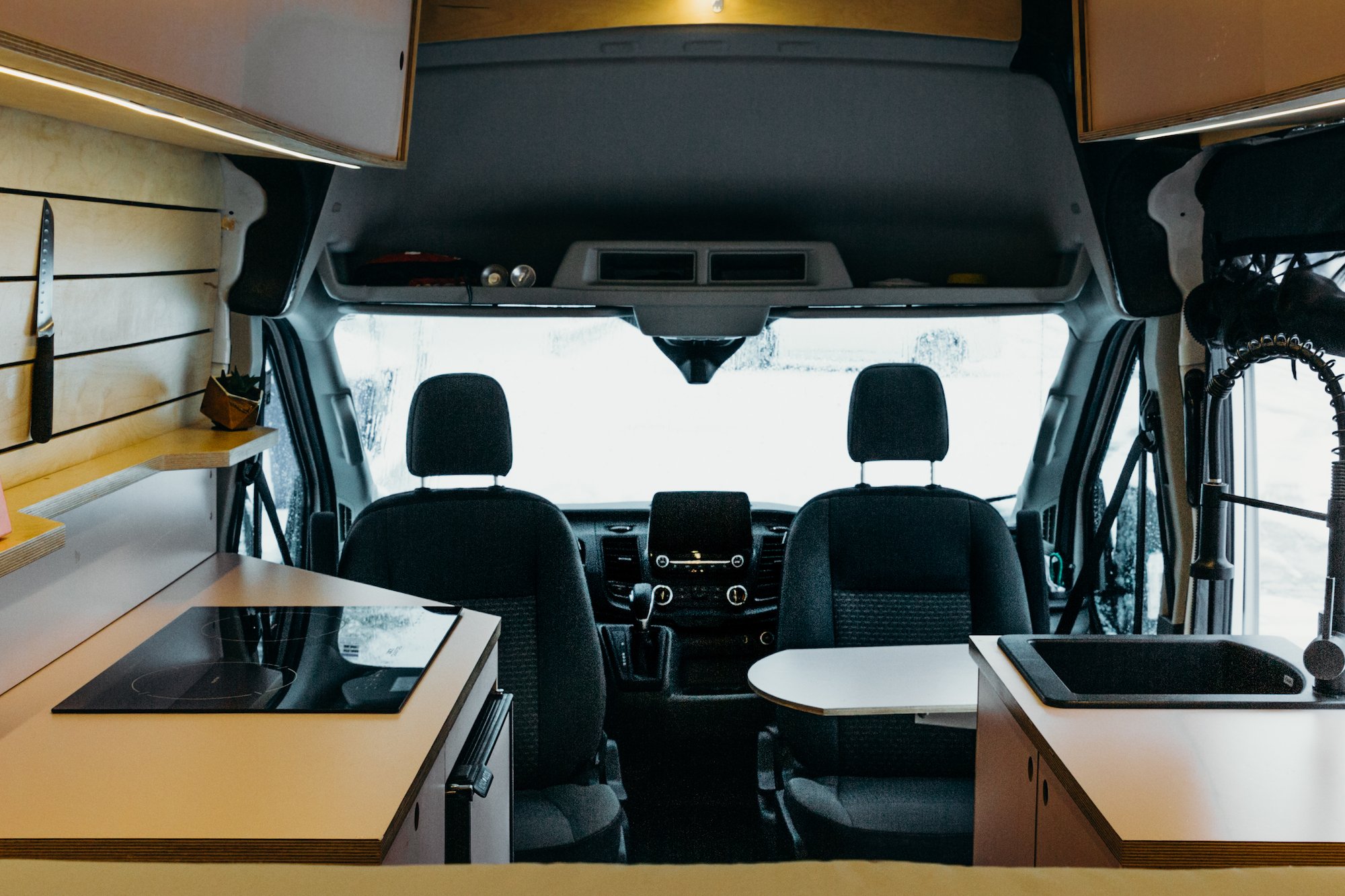 “We launched the website in September. Our first van was built using regular power tools but production will be robotized going forward: we’ll use 3D scanners to sketch out the interiors of the vans, 3D models of all the woodwork and computer-controlled cutting machines to slice the wood. We’re working with an incredible Toronto woodworking service, Studio Hand, that has tons of experience working with digital fabrication. Costs start at $46,000 using our pre-set models, but clients can add upgrades. We also offer custom builds where clients can design their camper van from the ground up.

“The response to our service has been incredible. We’ve had over 180 requests for work, but the barrier right now is finding vans. There’s a massive superconductor shortage—it’s a type of material required for the microchips in all new vehicles—and it’s impossible to buy any vans. 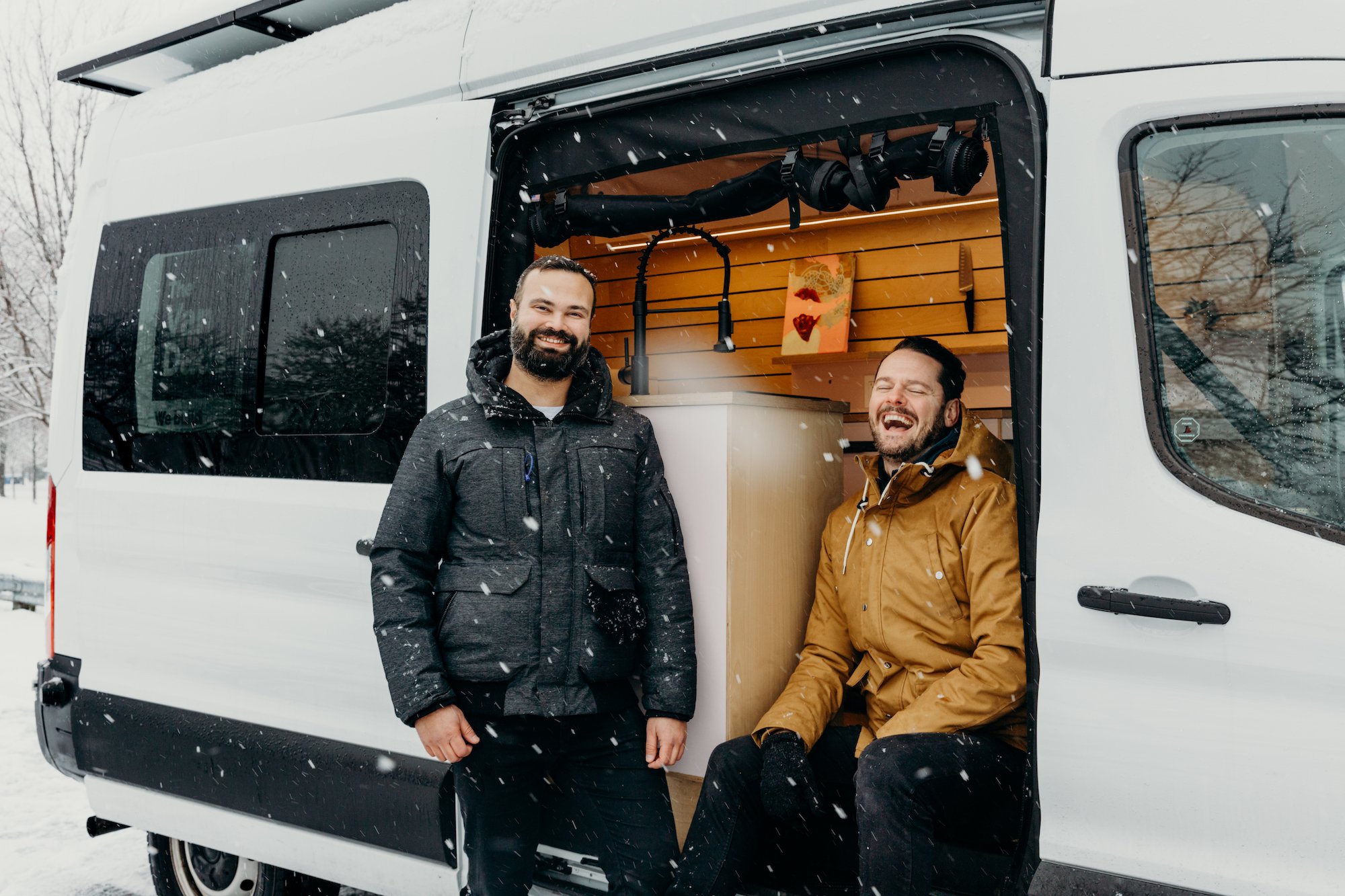 “We have about eight clients, from various backgrounds, who are looking to buy the last vans available in Toronto. There’s an older couple who are downsizing and moving into the van to save money on housing. There’s young people who are digital nomads. There are also disabled clients who want to use their vans as daily vehicles and for road trips.

“Right now, we’re building a van a month starting in the late winter as clients start finding vehicles. We’re excited to see our business grow, but we’re also itching to plan our next few van trips. We’d love to drive south to Mexico and see the southern United States. Gui really wants to drive to the east coast, where my family is from. One day, we’d like to swap vans with people from Europe and spend three months driving from Norway all the way down to the southern tip of Italy. We have yet to explore the smaller towns and far-away places in the European countryside, and there’s no better way to do it than in a van.”