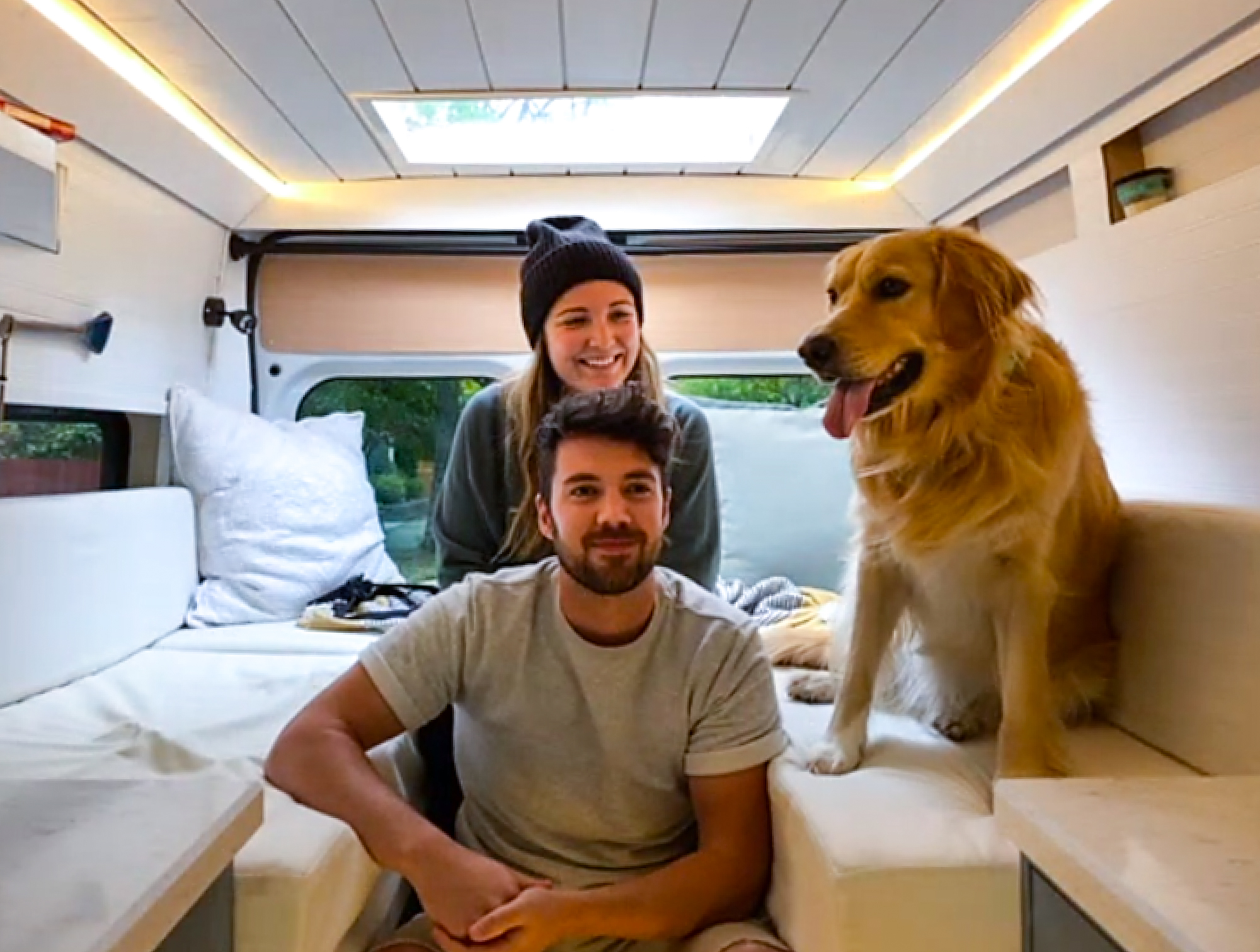 Who they are: George Briggs, 28, a former operations manager at Casa Loma and T.J. Semeniuk, 29, a server

Income: The couple collected CERB during the build, and currently live off savings and T.J.’s restaurant wages

– As told to Jessica Lee

George: I’m originally from Lymington, a small seaside town in England. Both of my sisters live in Canada, and in 2015 I planned on spending the holidays in Toronto. A month before I flew out, I thought, Let’s see if I can get a date while I’m there. I went on Tinder and matched with T.J. We met up the day after I flew out and instantly connected.

T.J. came to visit me a couple months later and we explored England together. We talked about how we both wanted to see the world together. After she flew back to Toronto, I woke up to a text message from her that said “I booked my one-way flight, so I’m coming. Let’s travel.” T.J. left her job as a restaurant server and gave up her apartment. I gave notice at my job and sold my car, and we travelled around America, Thailand and Vietnam for six months, before ending up in Australia in October 2017. We stayed with my childhood friend, James, who lives in Melbourne. I got a job at a landscaping firm, and T.J. worked as an event coordinator for a company that put on weddings and parties.

We wanted to continue our travels and talked to James about getting a van and driving across the U.S. together. A year later, T.J. was missing her family, so we decided to move back to Toronto in 2017. 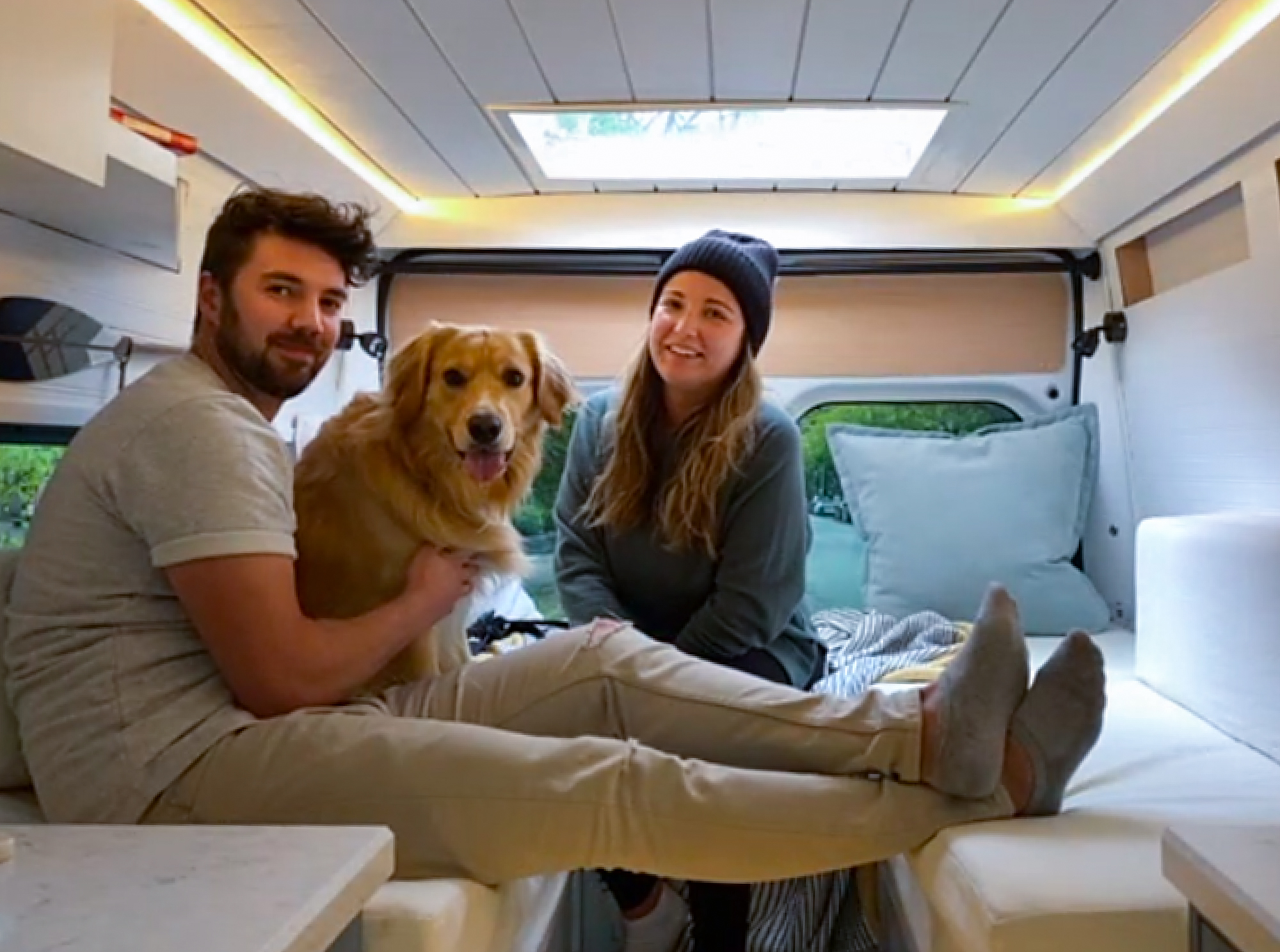 We lived in the Beaches for about a year, then we moved to Queen West. I got a job at Casa Loma as an operations manager, and T.J. worked as a server at a vegan restaurant. In January 2020, we Facetimed with James and talked about building a van and travelling to California. The next day, James said he had bought a one-way flight from Australia and was going to be in California in June. We were interested in joining him, but hadn’t planned it fully before the pandemic started.

By February, they had stopped handshakes at work. People were getting serious about Covid. We saw the way things were going, so we planned to move out of our apartment at the end of the month and move into T.J.’s parents’ house in Woodbridge with our golden retriever, Winnie.

A week or two later, everything started closing down. T.J. has a big Italian family, so they have all the food you could imagine, which was helpful for the first few weeks of the pandemic. And they live outside of the city, so we didn’t have to worry about crowds. 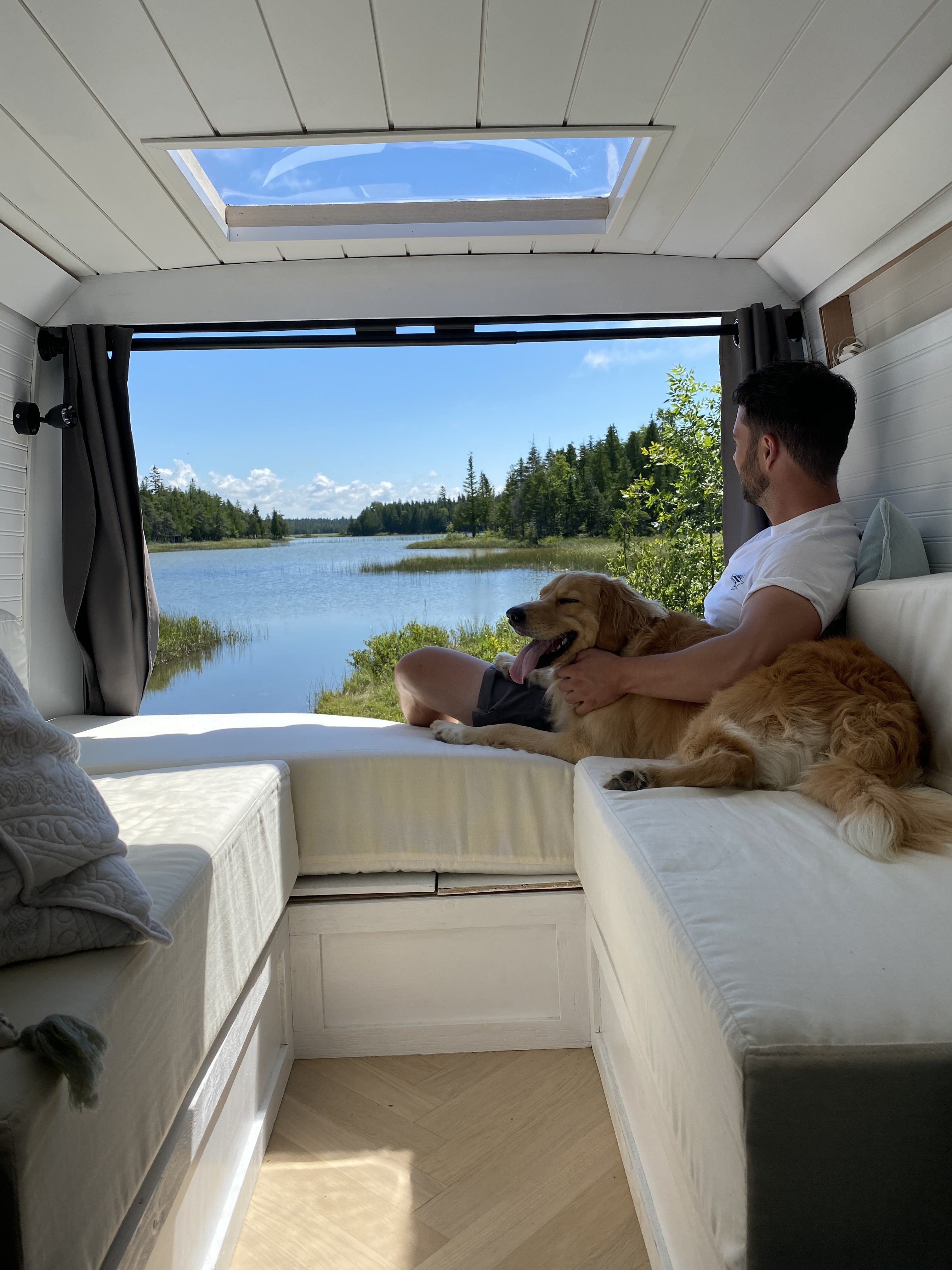 We started looking for a van at the beginning of March. We were living at her parents’, so it was hard to have our own space, and we wanted to travel around Canada in the summer.

T.J. was laid off the first week of March when restaurants started to shut down, and Casa Loma closed by the middle of the month. I picked up the van the day after I was laid off. When I went to buy it from the dealer, he said, “This is the eighth one I’ve sold. So many people are buying vans to convert them.” I worked on the van almost every day for two months straight because there was nothing else to do.

I’ve always been handy, and luckily enough, T.J.’s dad had every tool imaginable. He’s your typical dad who likes to build and do projects. He helped us frame the van in the early stages, but we also learned to build from YouTube. Our van has a shower, bed, toilet and sink. We added a large mirror to make the small space feel more open. 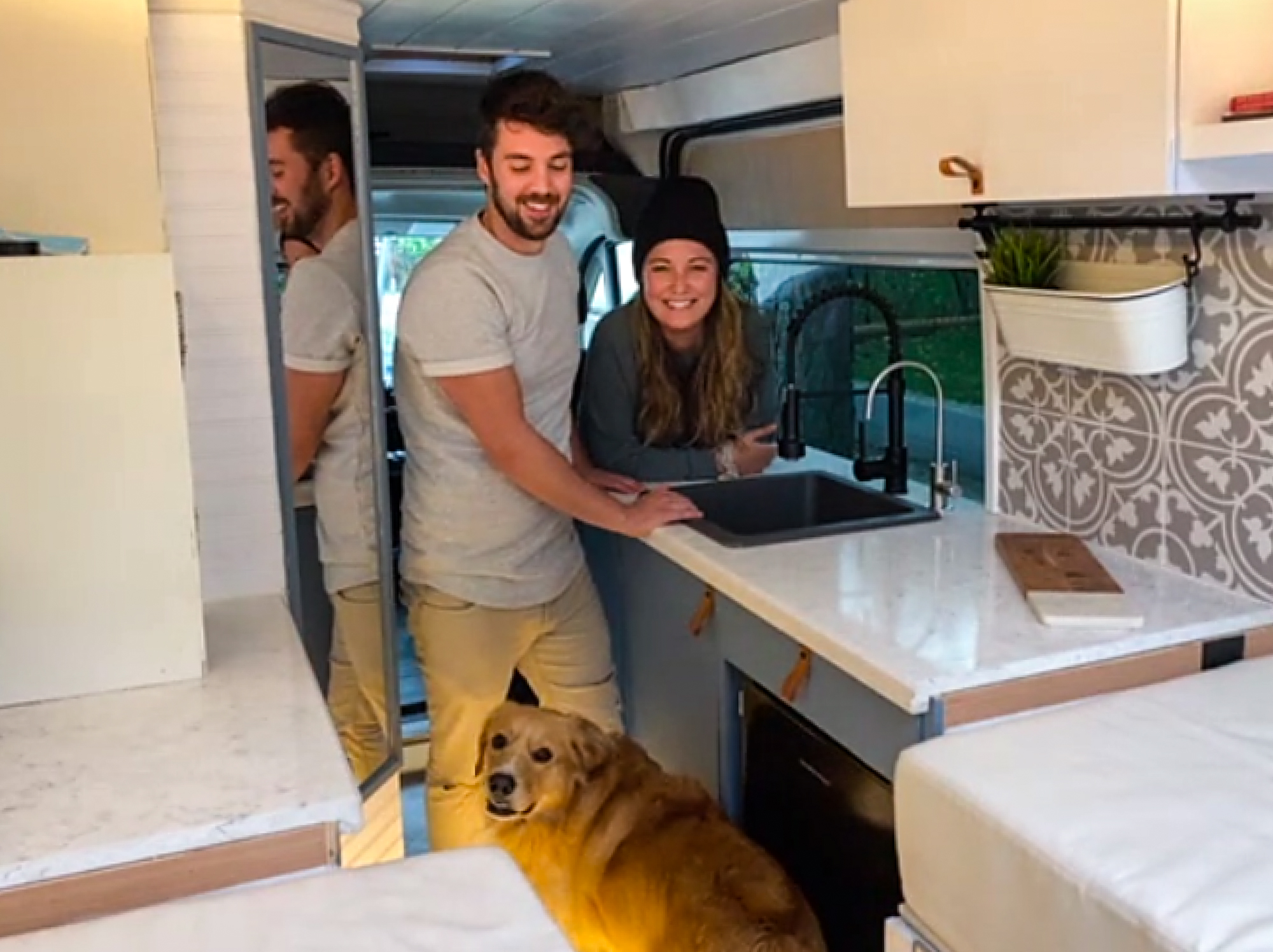 We decided we to leave Toronto by the end of July. When we were passing through Canada, we had a lot of people reach out to us on Instagram asking for help with custom builds. On our trip across Canada, we visited Manitoulin Island, Tobermory, Lion’s Head, Jasper, Surrey and Banff. Along the way, we parked at campsites, beside lakes, provincial parks and Walmarts. For WiFi, we hot-spotted our phones or used the Internet available at campsites.

Over the past year, T.J. always sent me photos of rings she liked. Leading up to the trip, I thought, If I’m going to do it, now would be the best time. I bought the ring and hid it in the back of the van with the tools. I would never let T.J. go to the back of the van. If she needed something, I would offer to go get it for her.

I’d always wanted to visit Moraine Lake. I knew we needed to be up super early to get a spot before the parking lot closes at 9 a.m. so the night before, we parked about 40 minutes away. T.J. is not a morning person, and she wasn’t too happy about waking up at 4 a.m. We managed to get a spot all to ourselves and watched the sun come up. Everything lined up right, so I got down on one knee and asked her to marry me. She had no idea. She was shocked that I had a ring with me throughout the trip. 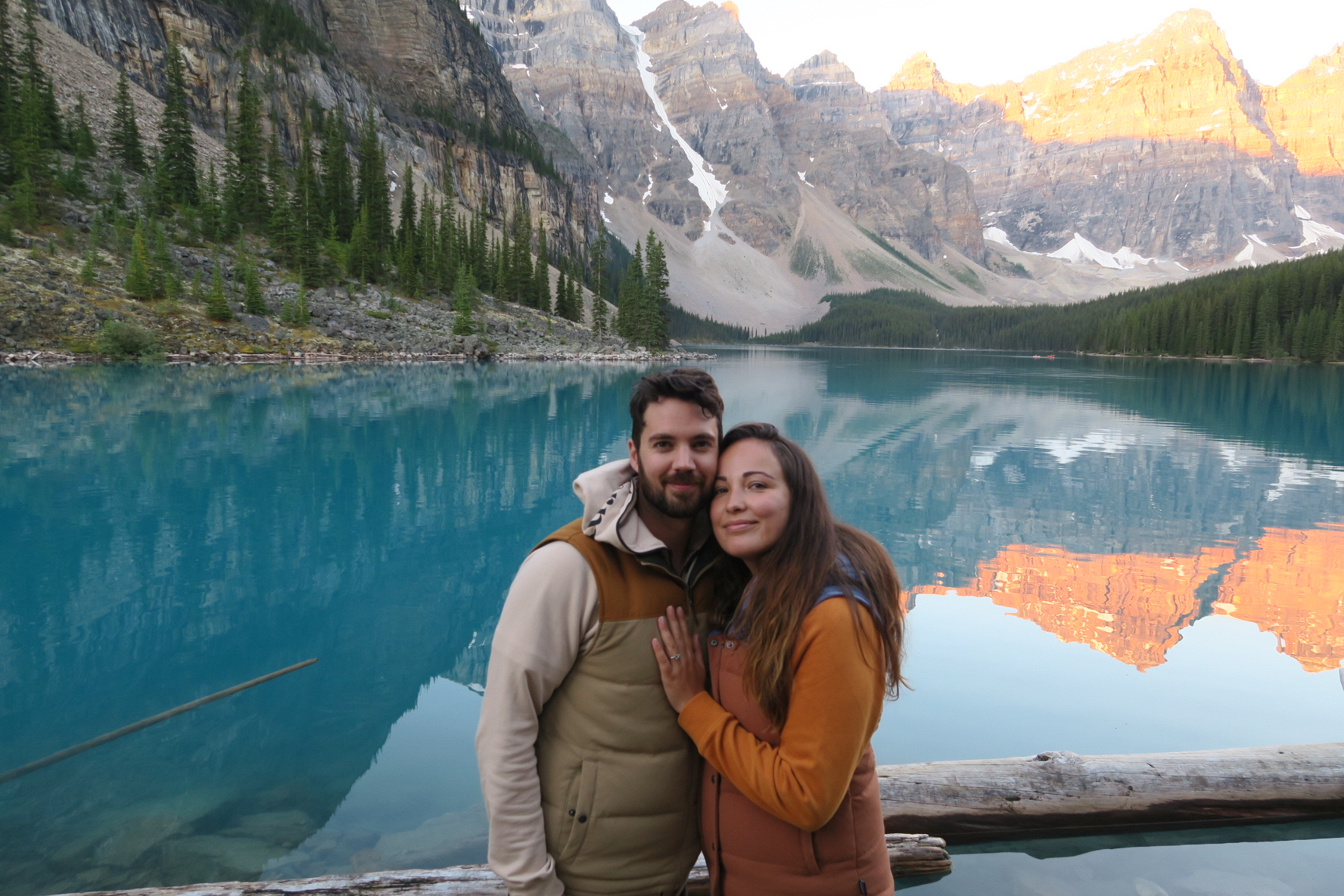 When we reached Kelowna, we fell in love with the beautiful lake. We thought, It’s going to get colder in the winter so we’d like to live here for a little bit and see what it’s like. T.J. found a house that was up for rent with a workshop in the back. We’re going to build a company, GnT Custom Vans, and generate income by building vans for other people.

We decided to settle down in Kelowna because it’s close to the border, so when travel opens, we can get more clients. There are so many people in the U.S. messaging us on Instagram with questions on van conversions. It’s so beautiful here with all the mountains, and the city seems laidback. We don’t know how long we’ll stay out here. We’re going to see how many clients we get and how the business does. 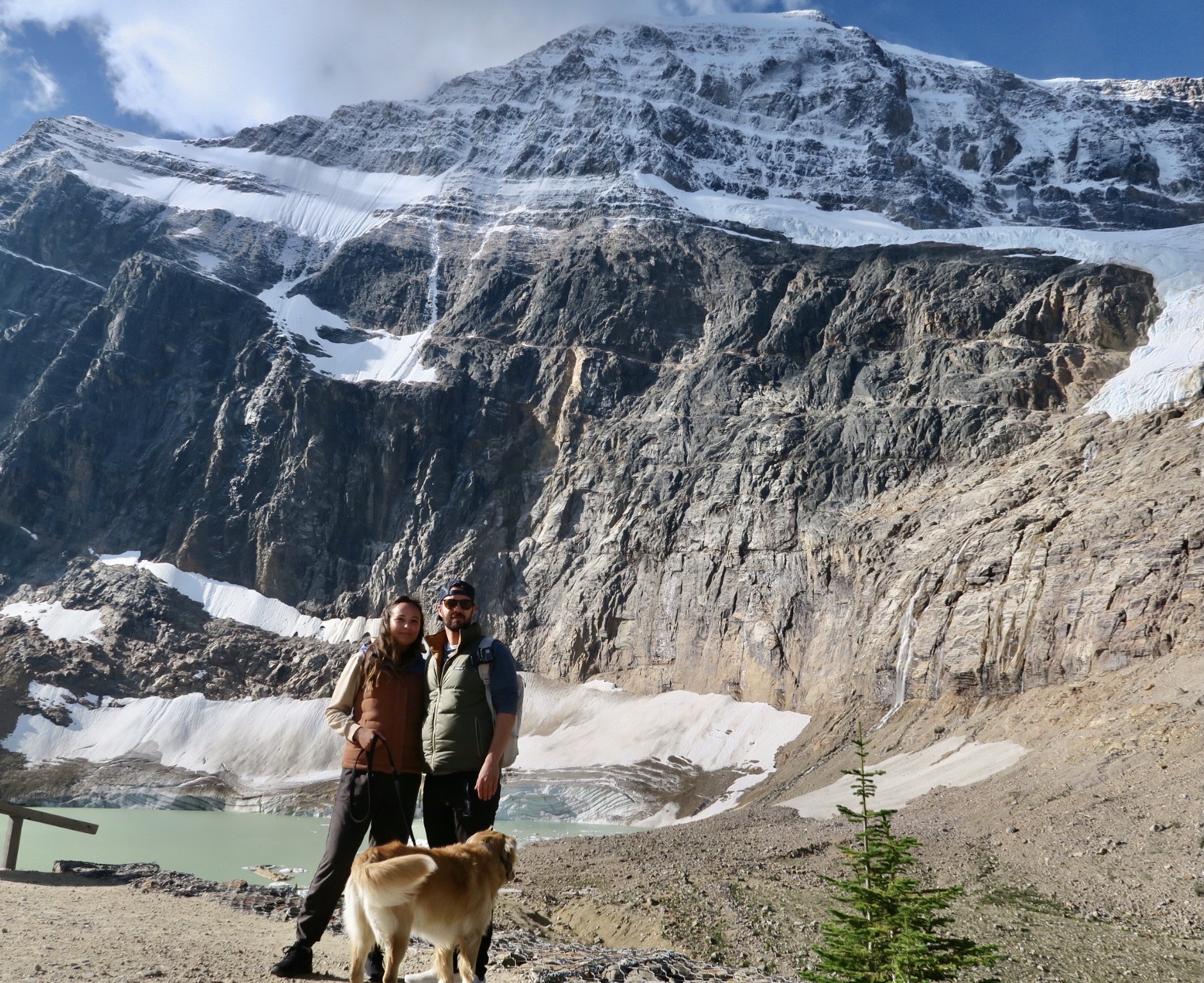 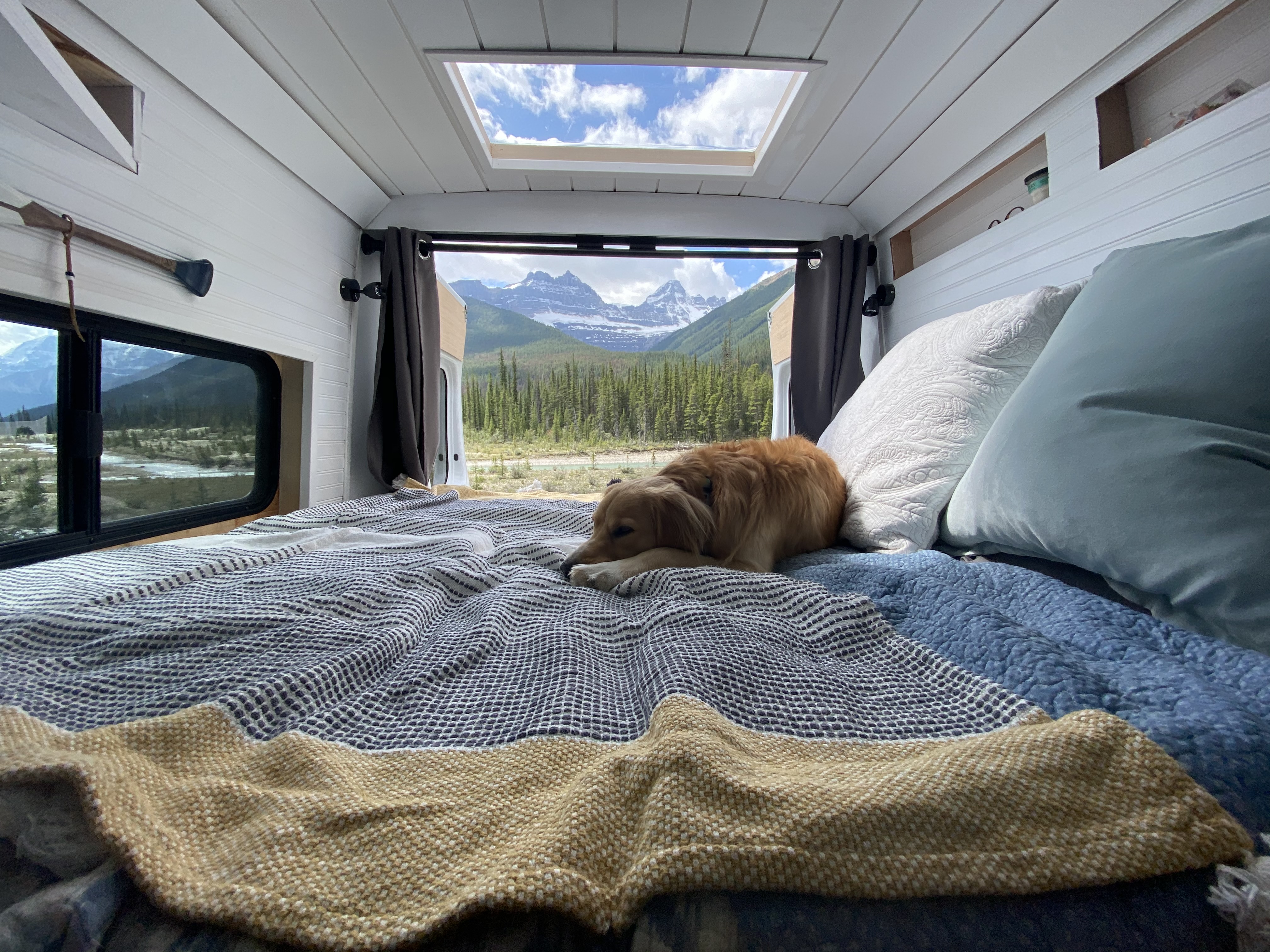 We put our van up for sale recently because we have our new place in Kelowna. If we ever move back to Toronto, we could build another one and drive back, or if the borders open up, we could go down to the U.S. We’ve had the experience of building and living in our van, and now we know what we would change if we were to do it all over again.

Our parents are supportive of our move and are glad we’re not as far away as Australia. In fact, when we left for our cross-country trip, T.J.’s dad and her brother ended up buying a van—now they’re building it out themselves.