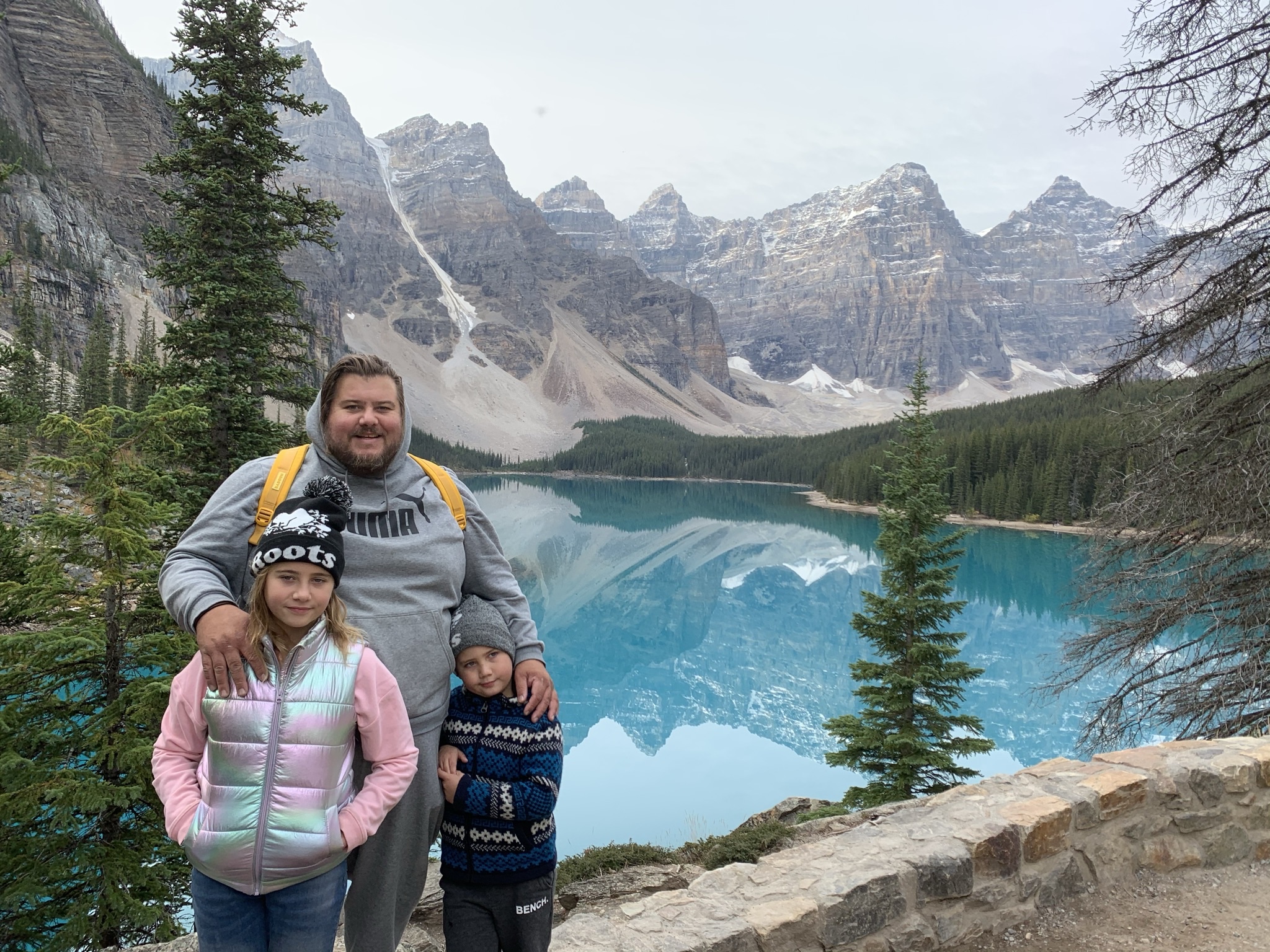 Chef Rodney Bowers, TV host and head of food media at Centennial College, and Meredith Shaw, a radio and TV host, have been together for more than three years. When the pandemic hit, they both adjusted to running their careers from home and helping Rodney’s kids, 10-year-old Abbey, and eight-year-old William, with e-learning. In September, while the kids’ schools were figuring out the virtual rollout, Rodney decided he would take the kids on a three-week educational cross-country road trip. Here’s how it went.

–As told to Jean Grant

Rodney: “Meredith and I live in Little Italy, where I used to run a restaurant called Hey Meatball. In addition to my teaching gig, I regularly appear on the Marilyn Denis Show, and Meredith and I have a show together on CTV called Double Your Dish. When the pandemic hit, we were juggling all our jobs from home, which was a big change—especially while dealing with kids.

“I’m from a small town in Newfoundland, and I usually take the kids there for a month every summer to visit family and connect with their roots. This year we couldn’t do it—summer was basically shut down and Newfoundland was in the Atlantic bubble. Meanwhile, Centennial went completely virtual, so I was busy filming a series of videos. I deferred my vacation to the fall to spend more time with the kids at home.

“When September came, we figured that the safest thing to do was keep the kids out of school and stick to our own tight-knit family bubble. But at the start of the year, the schools were slow getting virtual learning organized, and the kids’ start dates kept getting pushed back. As of mid-September, neither of the kids had an assigned teacher. It was all a bit of a gong show, so we decided to just go for it and plan a road trip. Unfortunately, Meredith couldn’t join us because of her radio show.

“Abbey and William have been through a lot through the pandemic, with not being able to see their friends and adapting to virtual school, and we wanted to protect their mental health. I kept thinking about ways we could make this strange moment amazingly memorable for them. I’m a bit of an adventurer: I grew up camping, and I’ve travelled extensively through Europe and North America. I was craving a similar experience, but doing it safely was a priority.

“We wanted to get out there and see the country, incorporating the landscape into the kids’ education, as well as the Indigenous history of the country. Abbey and William were over the moon about the idea. We decided to head to Alberta, where Meredith’s family is from, and her dad brought us over a stack of pamphlets on every part of the province. We looked at a bunch of places we wanted to visit and planned out the trip accordingly. We decided to fly into Calgary, and continue on to Fernie, Banff and Jasper. Then, we would head back through Lake Louise, Canmore, Saskatoon, Winnipeg, Thunder Bay and Sault Saint Marie before arriving home in Toronto.

“We mapped a general route and picked a couple of key places we wanted to visit, like the Terry Fox Memorial and the Alberta Badlands, leaving room for some spontaneity. We also did some research on Writing-on-Stone Provincial Park in Alberta, an incredibly spiritual place from an Indigenous perspective, and also really wanted to hit the Rocky Mountains to feel their majesty.

“In late September, upon arriving in Calgary, we rented a 30-foot beast of an RV with a kitchen, a separate room for me and bunk beds for the kids. There was tons of space. We also stopped at Toys ‘R’ Us to buy a bunch of games, and I stocked the RV with enough food for three weeks so we wouldn’t have to stop at any grocery stores. I was a little daunted because I’d never driven an RV before, but it was easy enough to get the hang of. 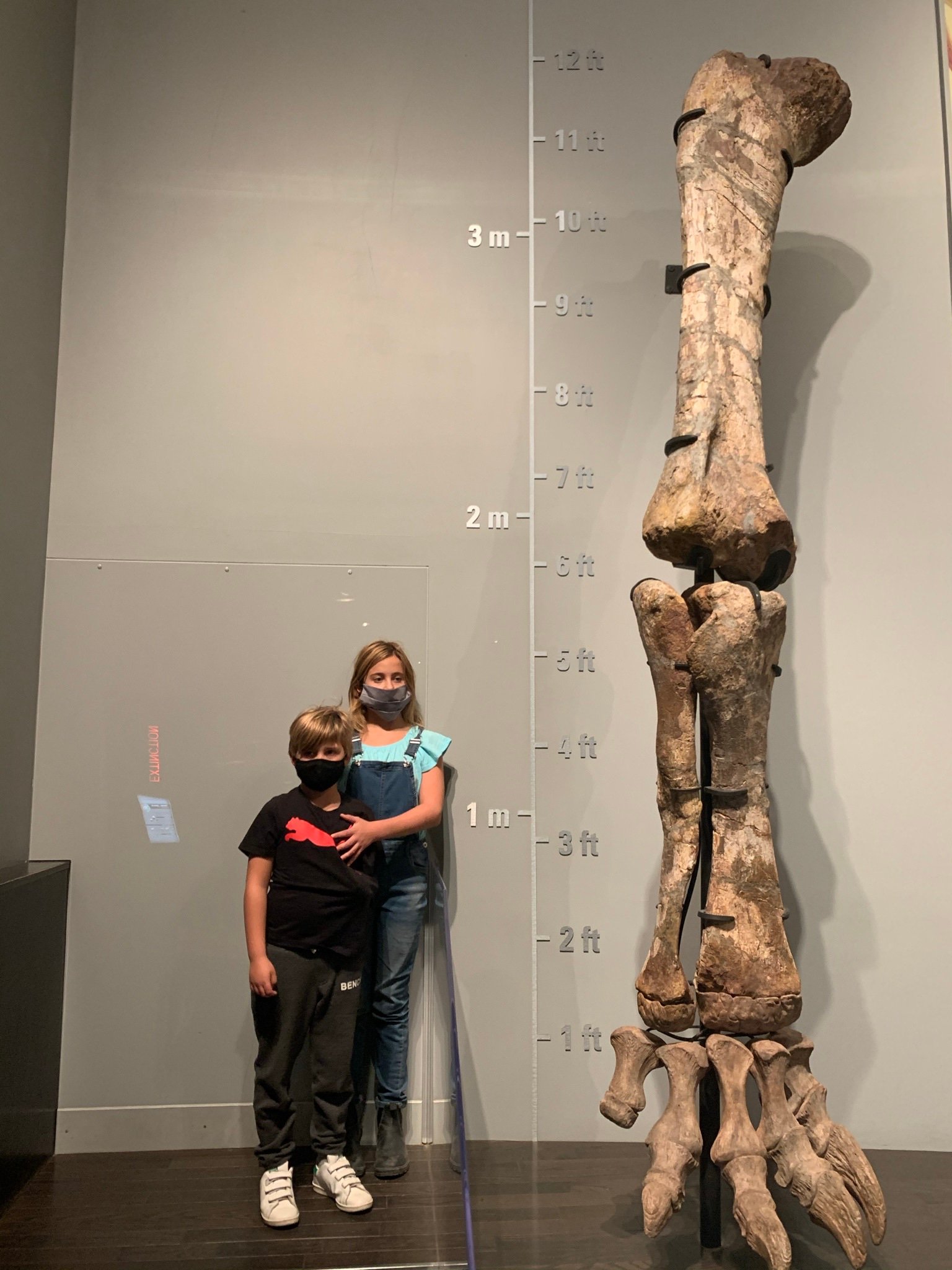 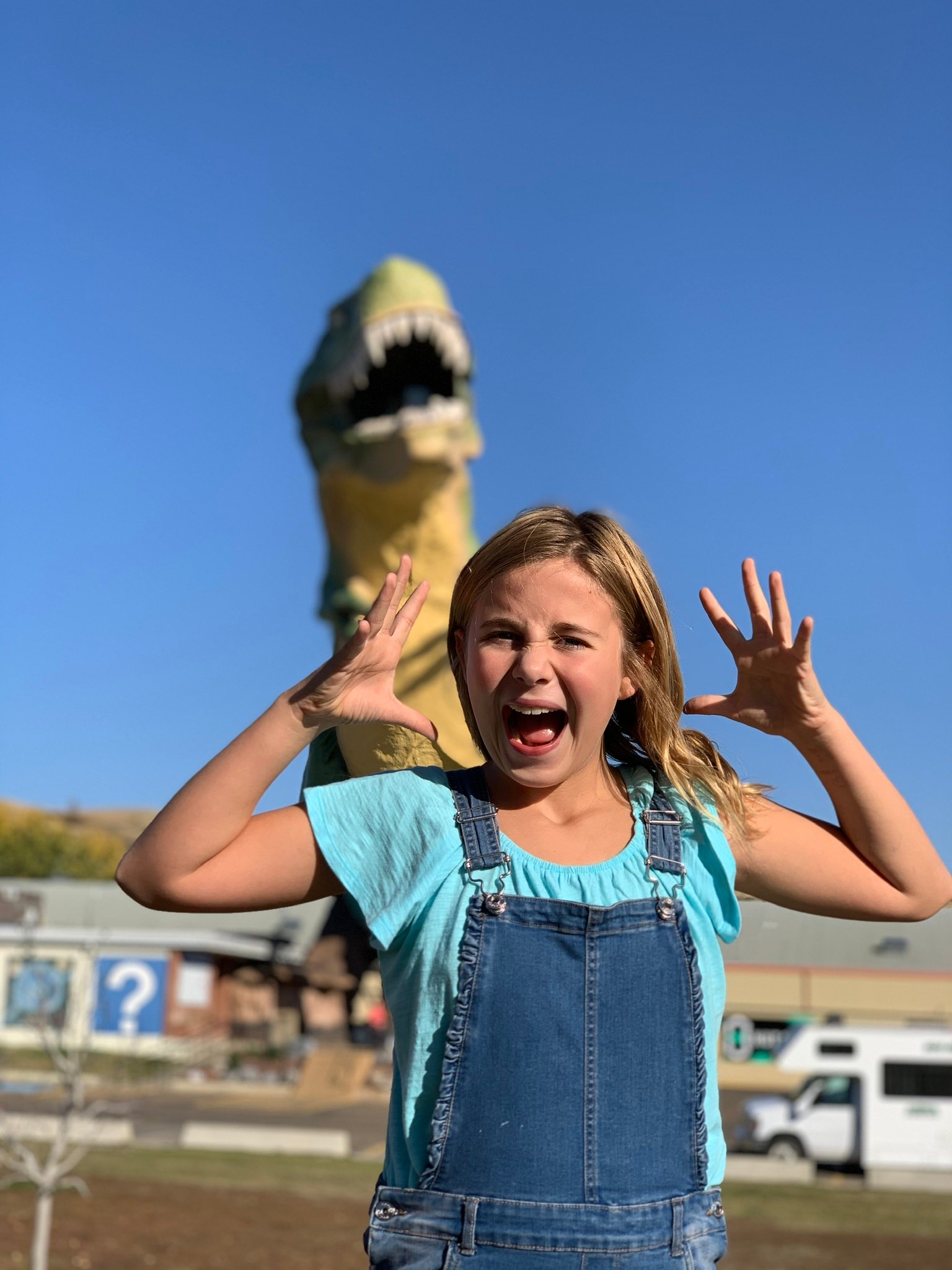 “I wanted to be able to plug away at the kids’ formal education and make sure they didn’t fall behind on the trip. I brought along a dozen Complete Canadian Curriculum books at their grade levels, along with a variety of other French and English books. We created routines for their learning, and I made sure to assign a certain number of pages from their workbooks every day.

“On the road we had no screens or Internet. Every day, we’d wake up early, have breakfast and go for a hike. Sometimes we’d pack a lunch for longer hikes. Any learning would start after lunch, when we’d hit the road for three to four hours. During that time, Abbey and William would do their assigned reading, solve math puzzles or write stories. Abbey became a bit of a teacher, helping William out if he was struggling. When she had problems, she’d come sit in the front seat with me to work through them.

“Then we’d arrive at our next campsite and make dinner. The kids learned how to build a fire and lost their minds when I let them stack and light it. After I reviewed the kids’ work and answered any questions, they even got to throw their homework into the fire, which was very cathartic for them. Every night, the kids earned up to four marshmallows depending on how much homework they accomplished. Still, we kept the schedule loose. One afternoon when we rolled into Jasper, we had a group of elk in our campsite. Watching them took up the rest of the afternoon. 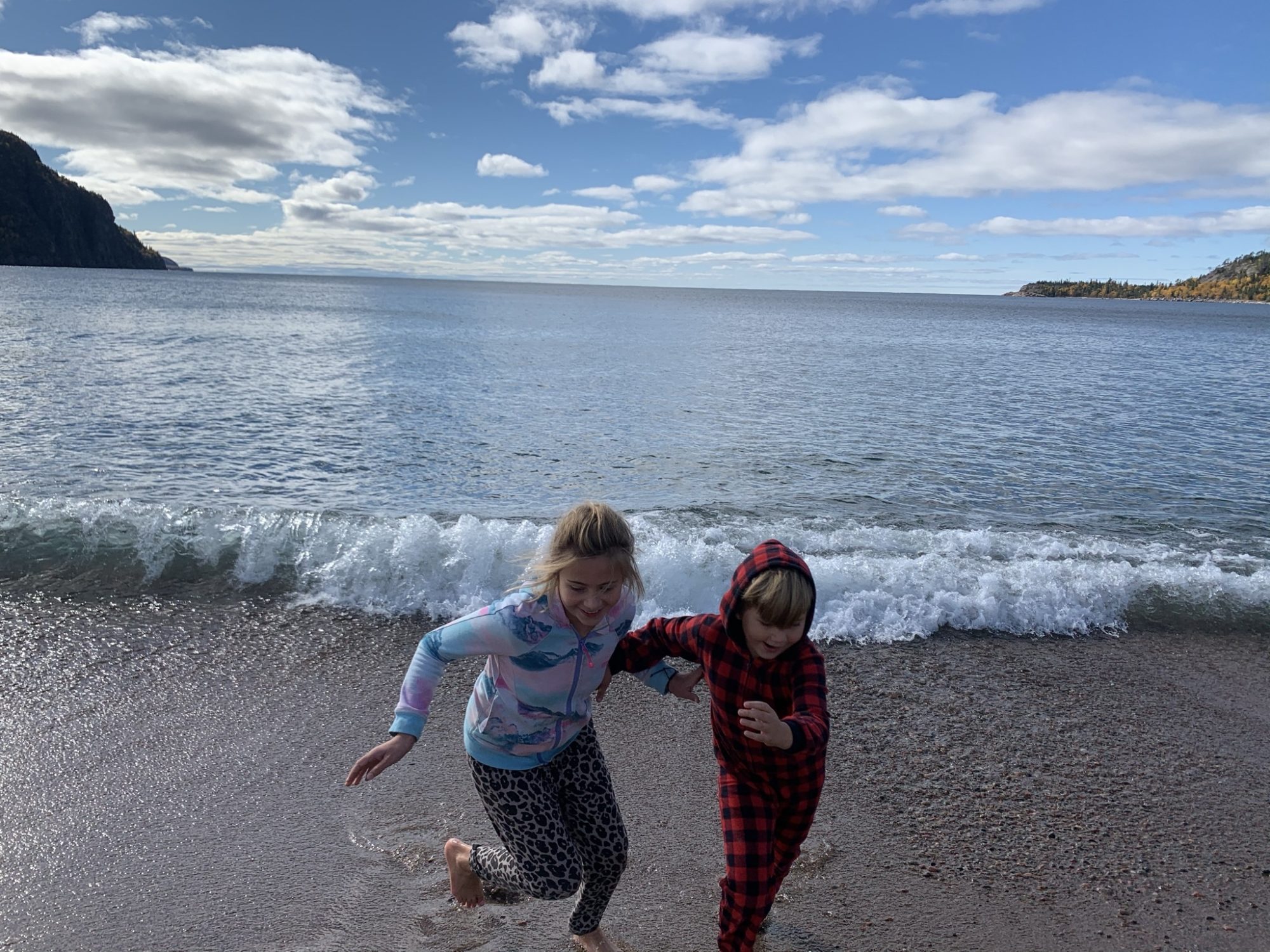 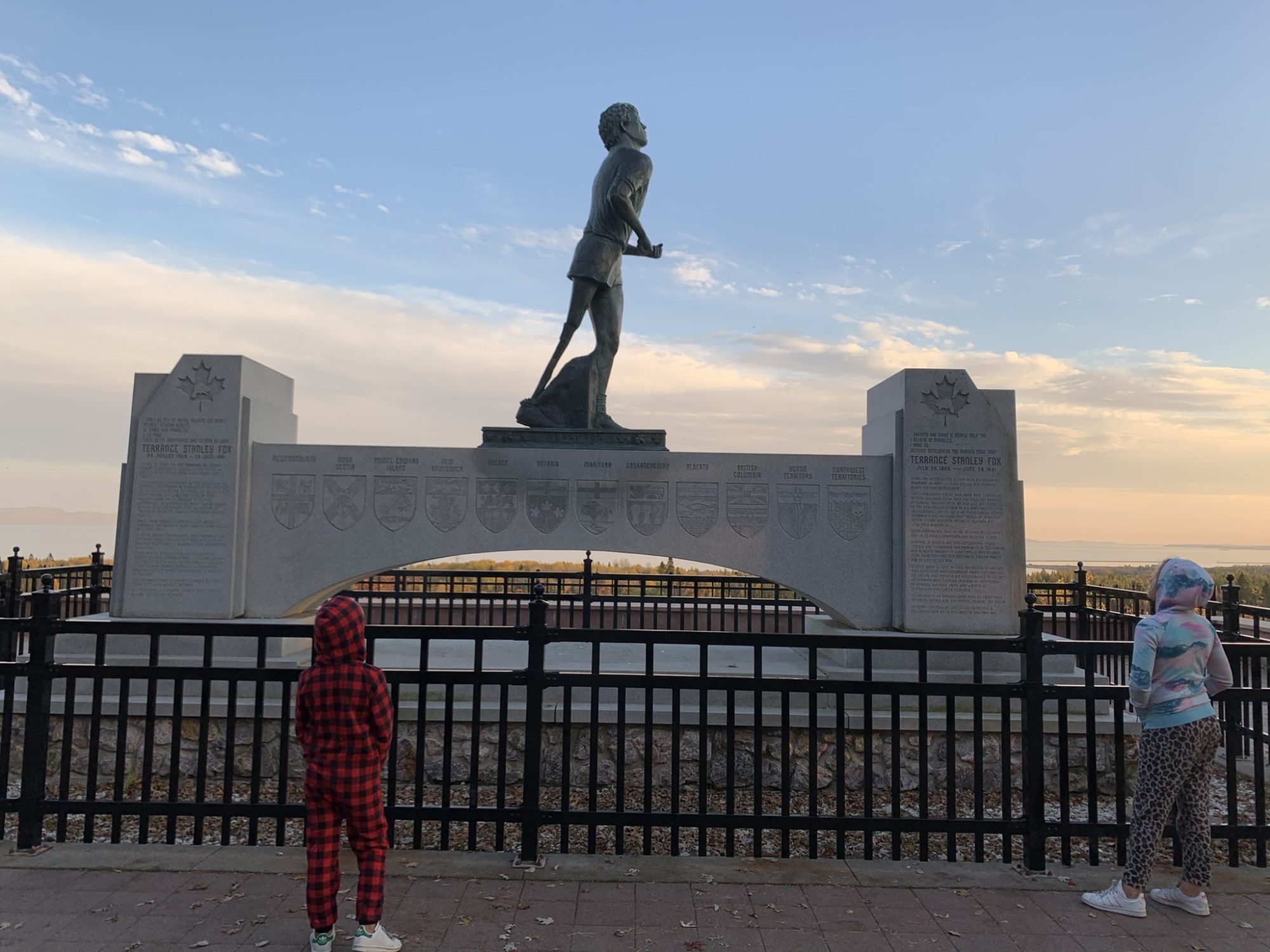 “The Terry Fox Memorial was a big highlight of the trip. The kids knew who he was, but to be in Thunder Bay, see the memorial and hear the story was very affecting. They talked about Fox for a while after that. At the memorial, I remembered how, as a child, I went to watch Fox in Newfoundland as he ran past.

“For the kids’ on-the-go learning, I tried not to force anything. I would present discussion topics—like how the mountains were formed, or why a national park exists—and see what interested and drove them. I’d say things like, ‘Here’s this piece of information, how does it strike us? What can we learn about it, and how does it translate to other things?’ I spoke to my kids the same way I speak to adults in my classes, and they responded well.

“Parks Canada did a great job providing the history of the land. We bought several books along the way, including one on the geology and composition of the Frank Slide. Abbey became obsessed with it and drew a comic about it. While we were in Waterton Lakes National Park, we got into a conversation about politics, because they have the International Peace Park. We talked about the border and Canada’s relationship with the United States. It weirds me out that my kids know Trump’s name—they don’t watch the news, but they know. We loved that area because of how quiet it was and how close we were to nature. It was eye-opening to city kids, born and raised in Toronto. 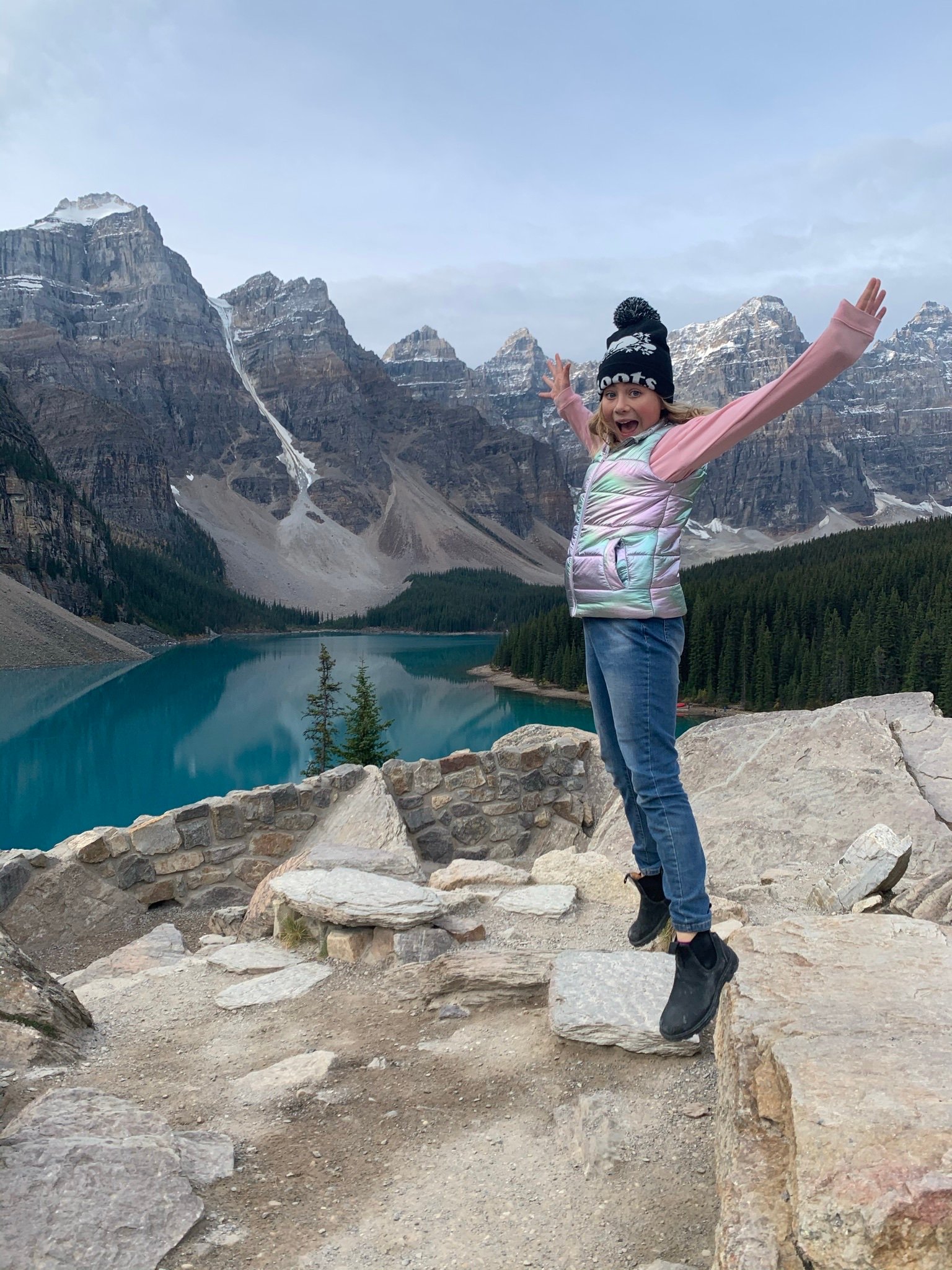 “The Costco run at the beginning of the trip lasted us the whole way. We ate all the berries and greens the first few days, then moved on to the breads and cheeses and meats and finished with things like canned lentils and frozen fish. We only had takeout twice: pizza in Waterton and a patio meal in Lake Louise. The kids and I were headed back into Toronto by Thanksgiving weekend.

“It was a whirlwind trip, and we feel so blessed to have done it. I’ve noticed that Abbey and William have a new sense of awe, adventure and possibility. They have a new practical understanding of the country’s geography and history, as well as the ability to glimpse how vast humanity is. They bring up Terry Fox as a source of inspiration and talk endlessly about the rugged landscape of the Rockies, especially the joy of seeing wildlife roaming around. In summer 2021, I’d love to explore the Northwest Territories with Meredith and the kids. We’ll drive from Vancouver, up through the Yukon and on to Tuktoyaktuk, stopping wherever we feel like.

“We put so much pressure on ourselves as parents to make sure our kids are on top of things. I have a friend who homeschools her four children. She offered some advice before we left. She told me that ultimately, kids will learn. Just use the words you’d use with an adult, expose them to great music and great books and they’ll get it. I heeded that advice and it paid off.” 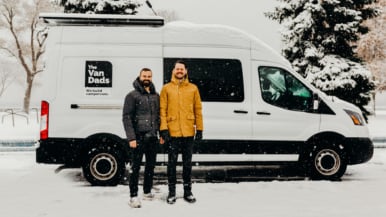 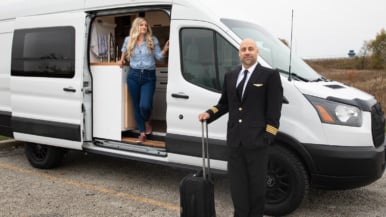 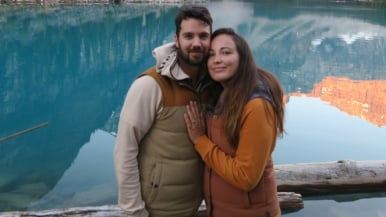 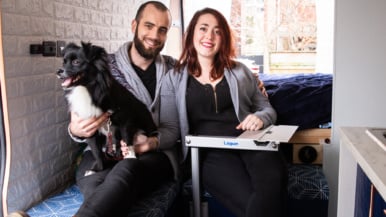