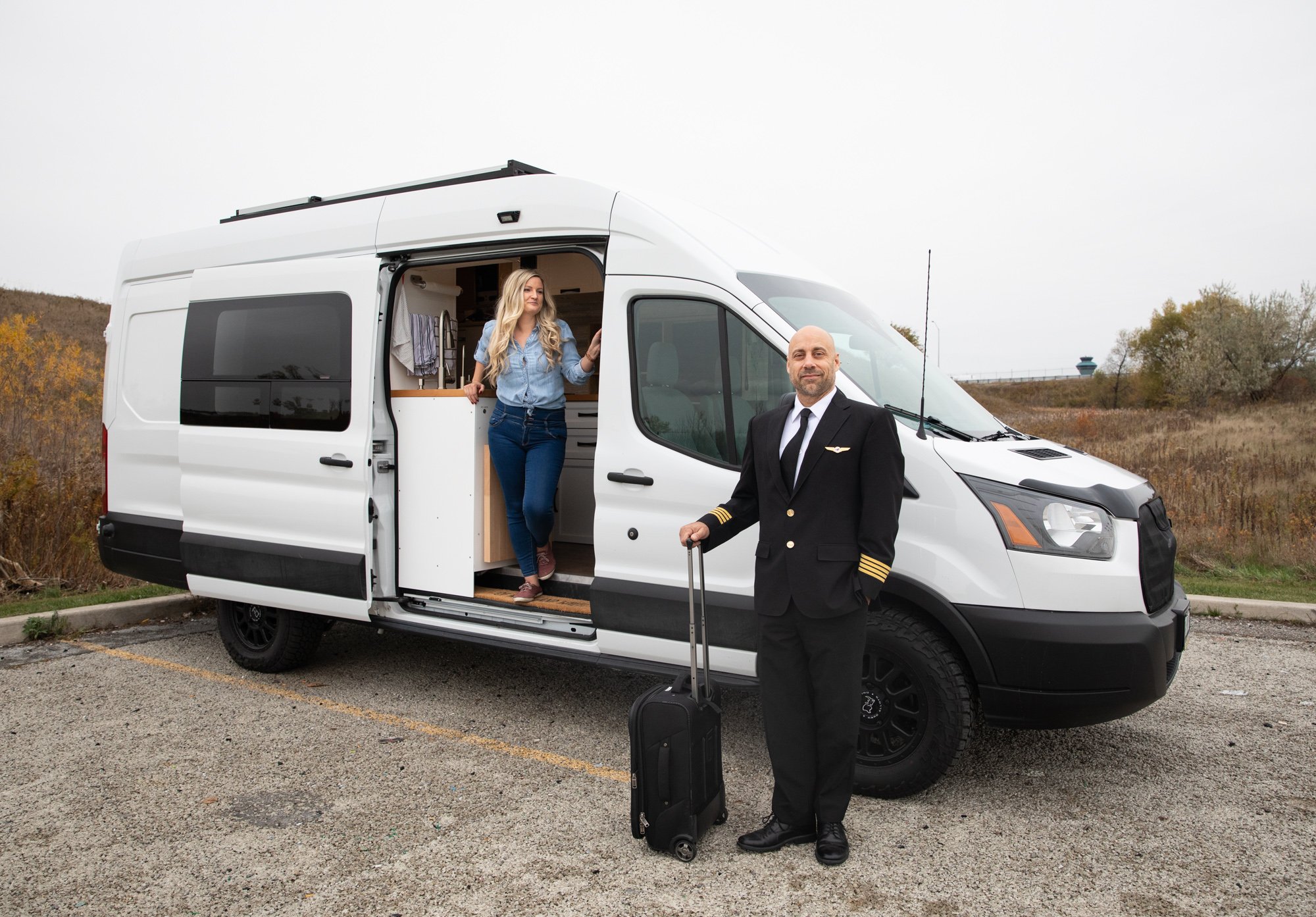 Who they are: Hayley Mauritis, a 31-year-old flight attendant, and Brian Stokes, a 47-year-old pilot

Hayley: Brian and I met on a layover at a resort in Cancun in February 2016. We were working with different crews at the same airline and happened to be staying at the same resort. A month later we flew on a work route through Cuba, Edmonton and Costa Rica together, and we really got to know one another. For months, we would run into each other on layovers and joke around. We kept in touch after that, but I didn’t think it would lead to anything because I lived in Toronto and Brian lived in Edmonton. Then in 2017, Brian moved to Toronto and we started seeing each other more often.

I’ve always been curious about van life, so I would send him Instagram posts from van lifers and say things like, “We could be in Banff or South America right now, doing whatever we wanted.” In December 2019, he bought a van out of the blue and surprised me. 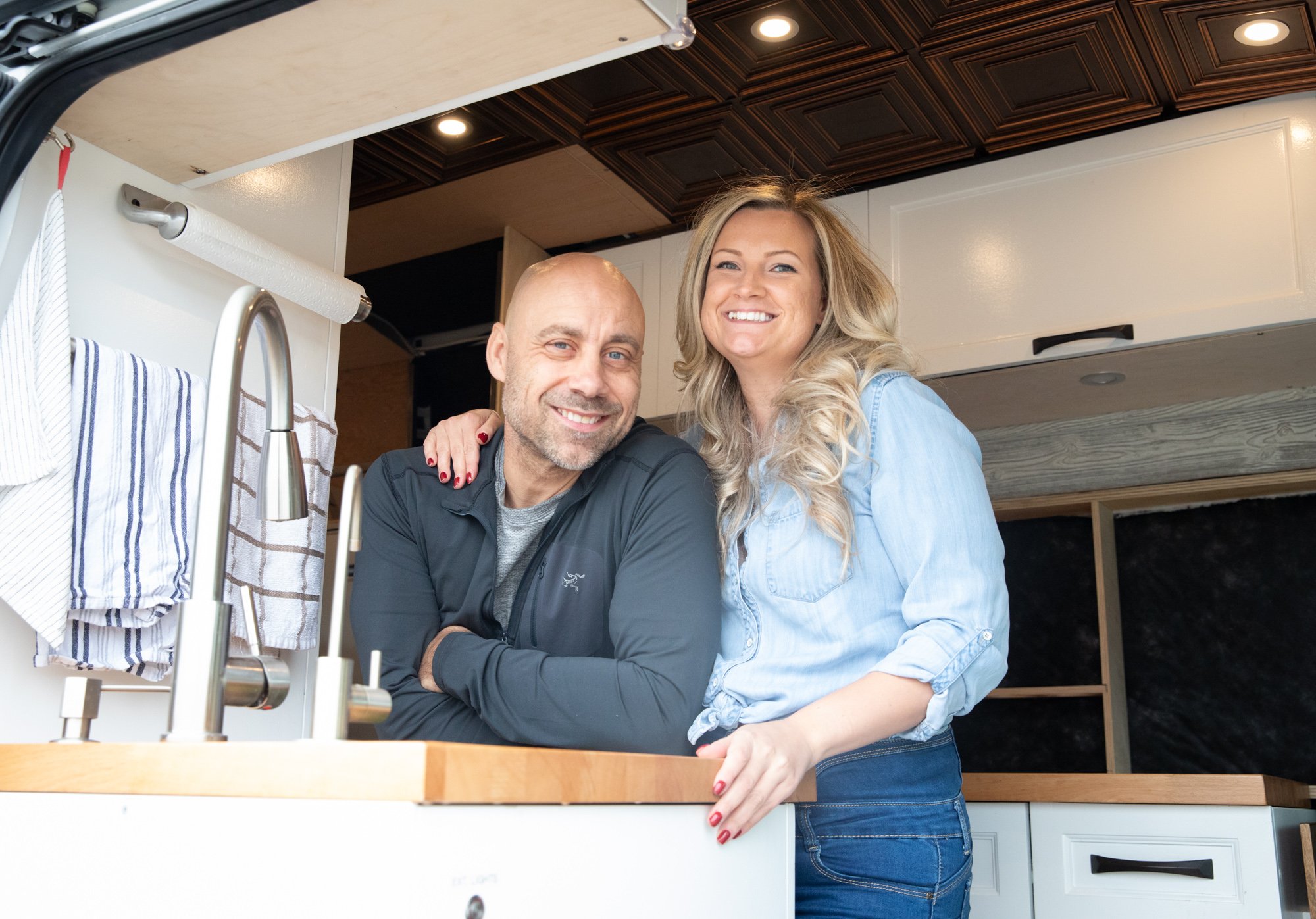 Brian started living in it almost immediately when it had only a bed and a heater. Luckily, we ordered a lot of the stuff for the build, like solar components and electrical systems, just before Covid. There’s a two-month wait now. But eventually he built it out with a kitchen, closet and a water system. For most of the early spring, he was parked in a friend’s driveway, and just worked on the thing in his spare time.

We talked about taking our first big trip at the end of 2020 to Calgary or Banff where we could snowboard but landed on wanting to spend the winter at Revelstoke in B.C. Next, we wanted to make our way to the East Coast of Canada, and drive through Vermont and New Hampshire. The plan was to keep our jobs, but live in the van and travel on our days off. 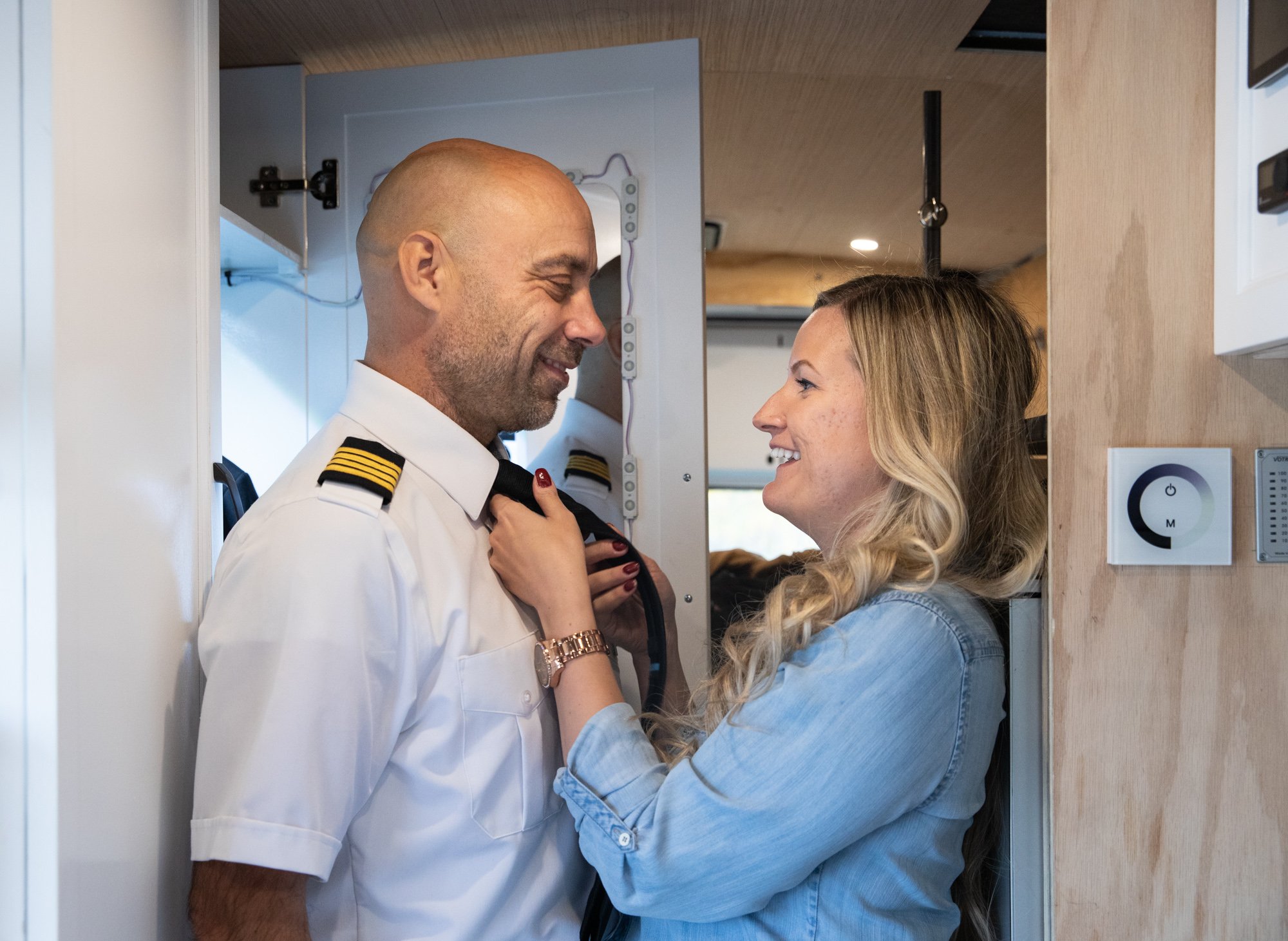 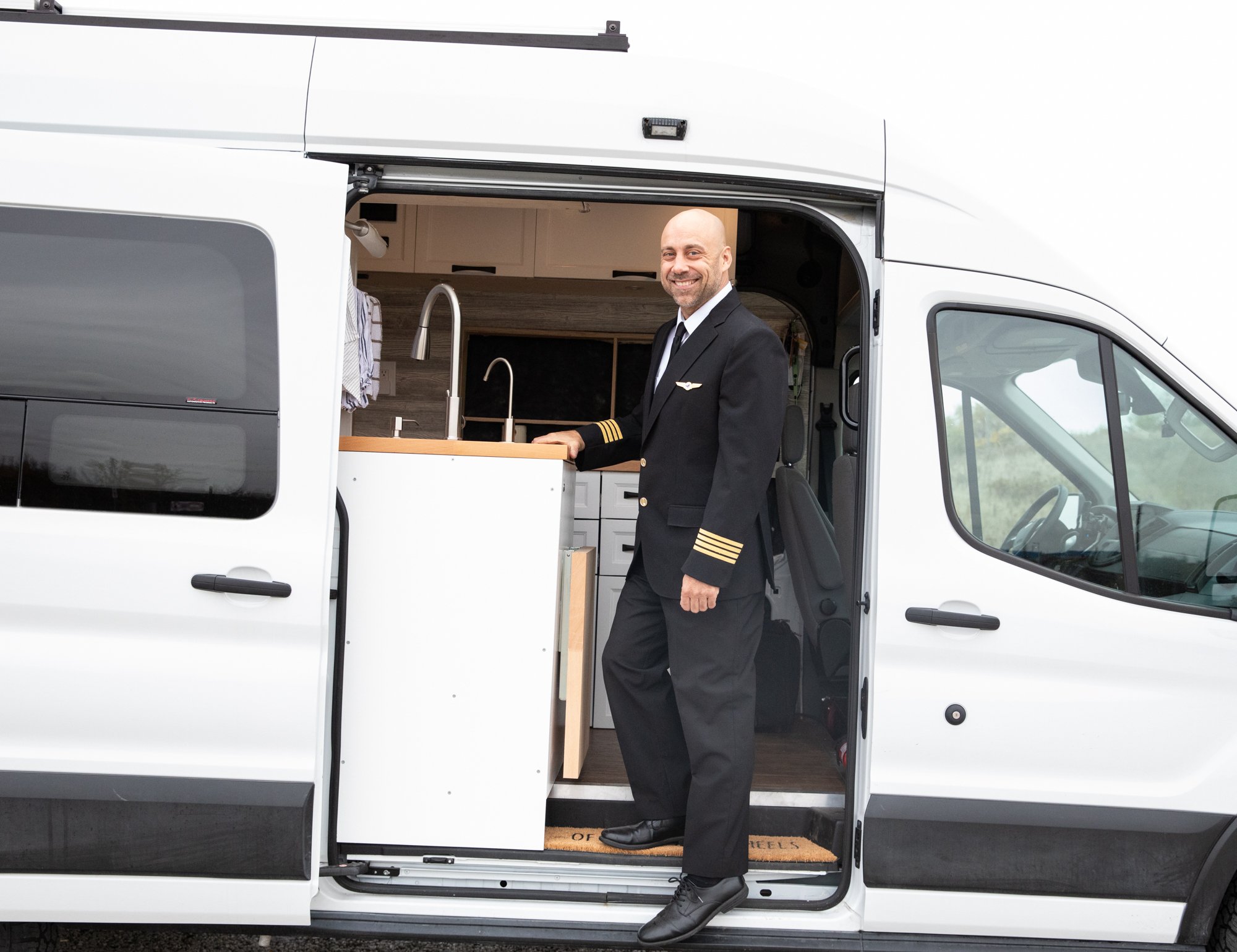 I was renting a condo in High Park when the city shut down, and I was furloughed from work. Fortunately, my mom and her husband were looking for a place in Toronto. They took over my condo, and I sublet a room from a friend to save money. Over the summer, I spent weekdays in the van with Brian but went back to my sublet on the weekends to give him time to finish building it. We haven’t been able to travel far because of Covid restrictions and border closures, plus I got a temp job over the summer, but we’ve been on short trips to Temiskaming, North Bay, down to Niagara. We’ve seen a lot of parking lots, which is not what we signed up for.

Transitioning to van life has been pretty easy for us because we’re used to living out of suitcases as flight crew. That’s not to say it doesn’t have its challenges. When the weather is warm, we’ve got an outdoor shower we can use, but we don’t have warm tap water, so at first I was washing my hair in freezing water from the sink. We’ve learned to heat water on the stove and pour it on slowly—hair washing is a two-man job now. We’ll probably put a hot water heater in here eventually. We currently get water from friends’ places. We have a 39-gallon water tank under our bed, and we just fill it up occasionally with a hose. Gyms are where we planned to shower this winter, but they’ve all been closed down again. Right now we’re showering at my apartment, but once we’re both working as flight crew again, we’ll be in hotels for two to three days a week, so showering won’t be as much of a problem. 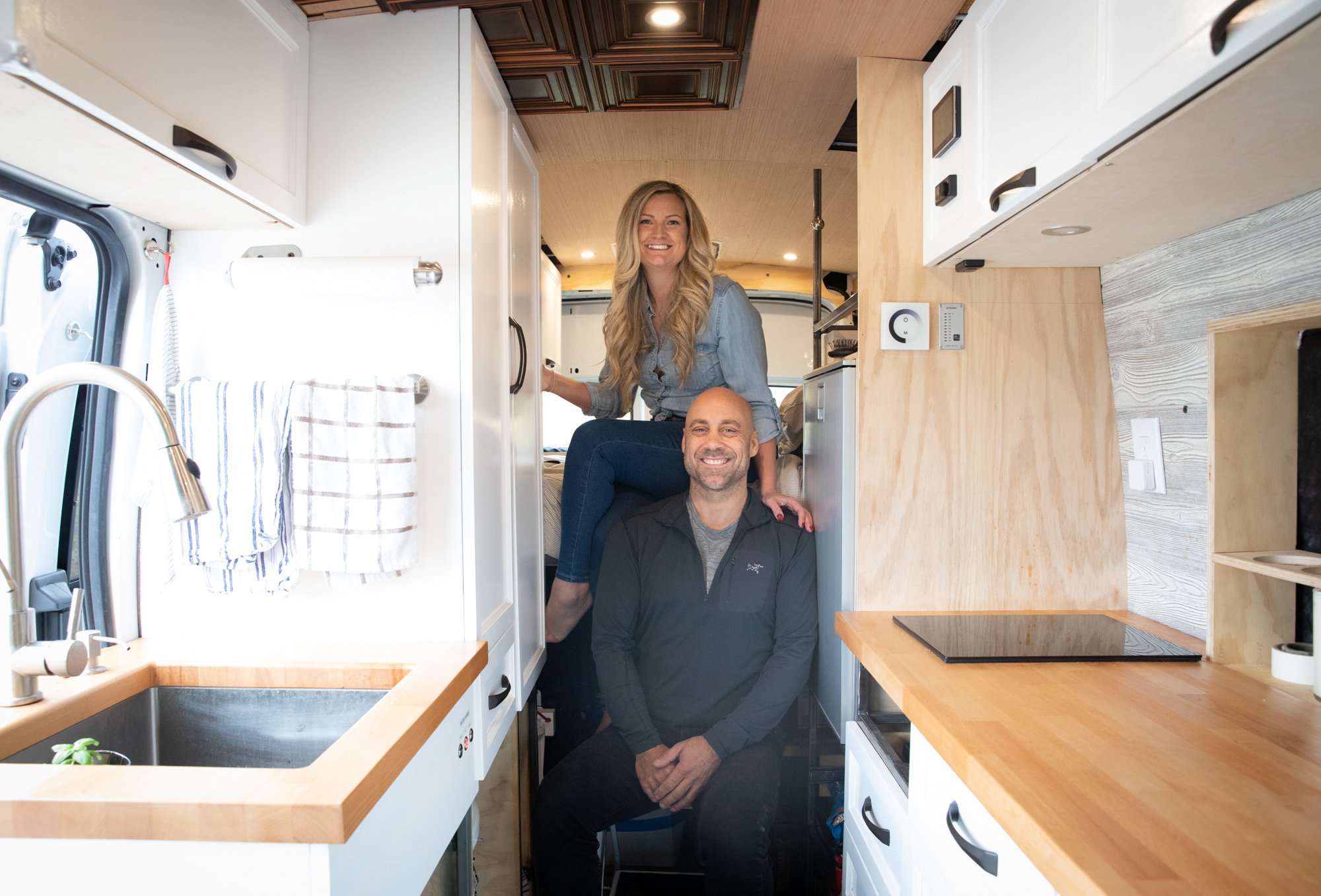 We’re not worried about living in the van for the winter because we built it to withstand -30 degrees. Our heater is really strong and we have a heavy blanket. We have an inch and a half of insulation on the floor, and the ceilings and walls are all done with Thinsulate, which is a really warm material that doesn’t take up as much space as regular insulation. I have no interest in being in an apartment anymore—I gave up my sublet late last month. I like the idea of living small with less stuff and being more intentional with the stuff I do have.

My mom and her husband are leaving my condo soon. Normally, they drive to Florida for the winter in early November. This year, the land borders are closed but Canadians can fly in, so they’ll be flying later this month. Once they’re gone, I’ll use the apartment for laundry, showers and to sell my furniture, but I can’t really afford it right now. I was let go from my temp job in early November. I get 50 per cent of my previous wage from a government subsidy program for airline workers, and it doesn’t cover my rent. The lease is up in March, so I have a decision to make: sublet it or just give the place up entirely. Either way, we’re sticking near Toronto this winter and seeing what happens as the situation evolves. 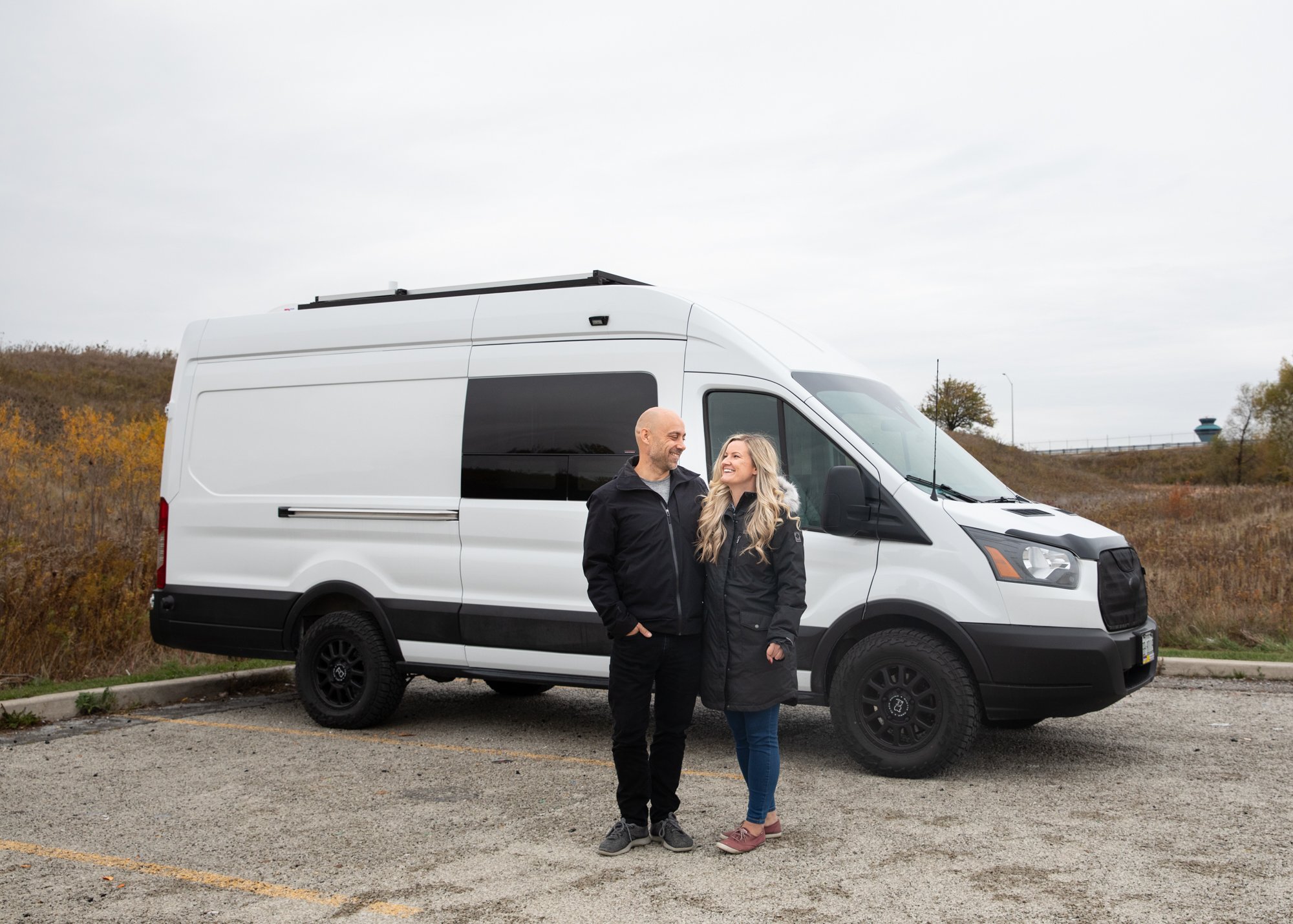 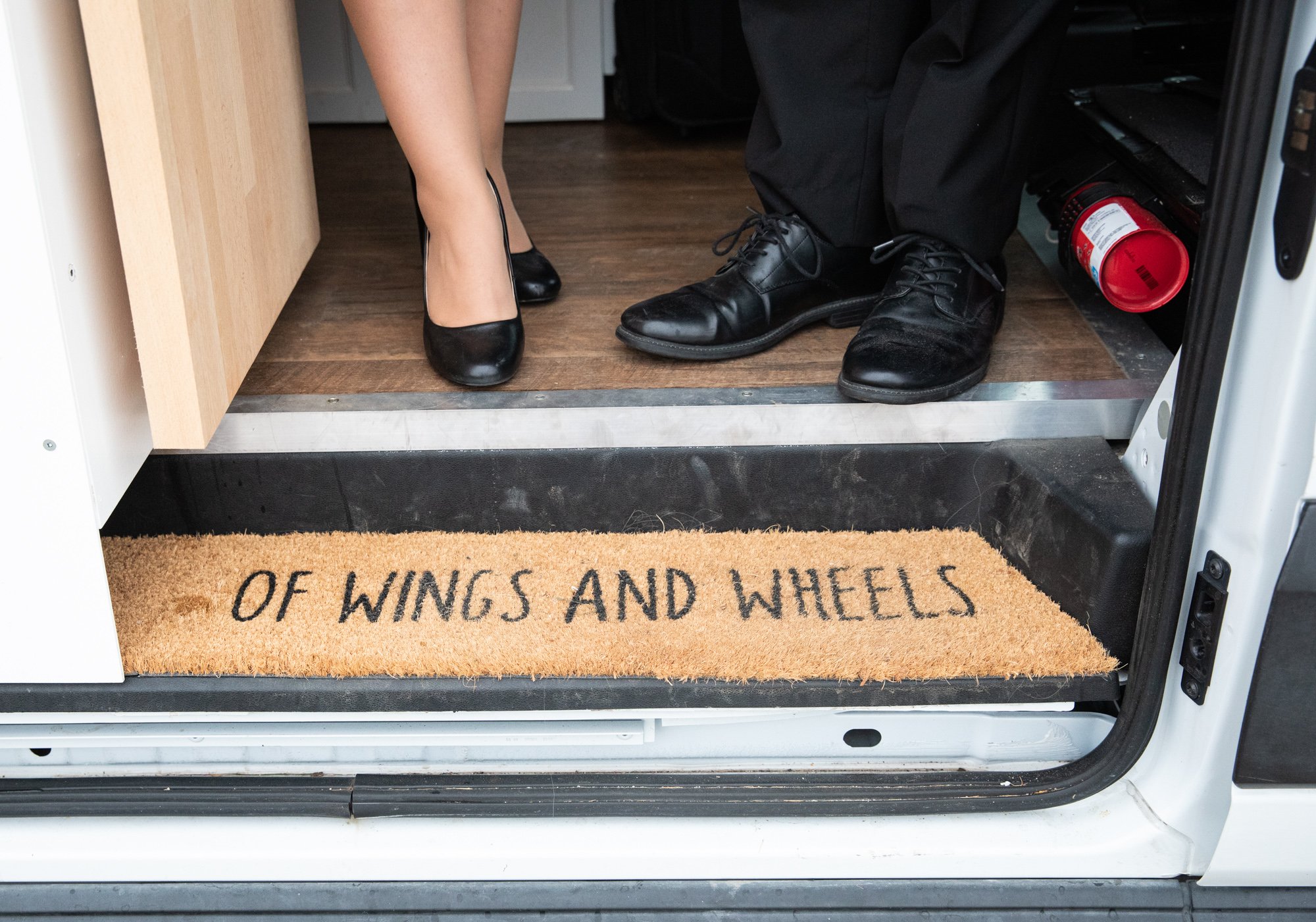 For now, we want to go snowboarding this winter and hiking nearby in the warmer seasons. We’ll spend the next few months going back and forth between Toronto and Mont Tremblant for four to five days at a time.

Every time we add something new to the van like the ceiling tiles, a new cabinet door or lighting, it feels more like home and I get so giddy and excited again. We don’t know how long we’ll be living here. We’re hoping it’ll be at least a few years because we put a lot of money into it. We want to save enough rent for the van to pay for itself. But there’s no rush—we could be in here for a decade. There are so many places to go.