Last year, Toronto artist Jennifer Laiwint created an online alter ego: a male pick-up artist and life coach named Jay Lay. The character started as a social experiment—a way to peer into the online world of pick-up artistry—but it quickly evolved into her latest artistic endeavour. The Pick-Up Artist, an exhibition chronicling Laiwint’s journey into the male ego, is currently on display at the Art Gallery of Mississauga until January 1. Here, she shares her adventures into the shady subculture.

Let’s start with the basics. Who are pick-up artists?
It’s a community of mostly cisgender men that share techniques and strategies for picking up women. They connect largely online, in forums and chat rooms, but there are also in-person seminars and what they call “in-field coaching”: going out —mostly to nightclubs—with the goal of seducing the opposite sex. What makes it controversial is the element of manipulation and commodification of women. A lot of people have heard of pick-up artistry because of Neil Strauss, the journalist who wrote The Game, a book about the time he spent infiltrating the subculture. 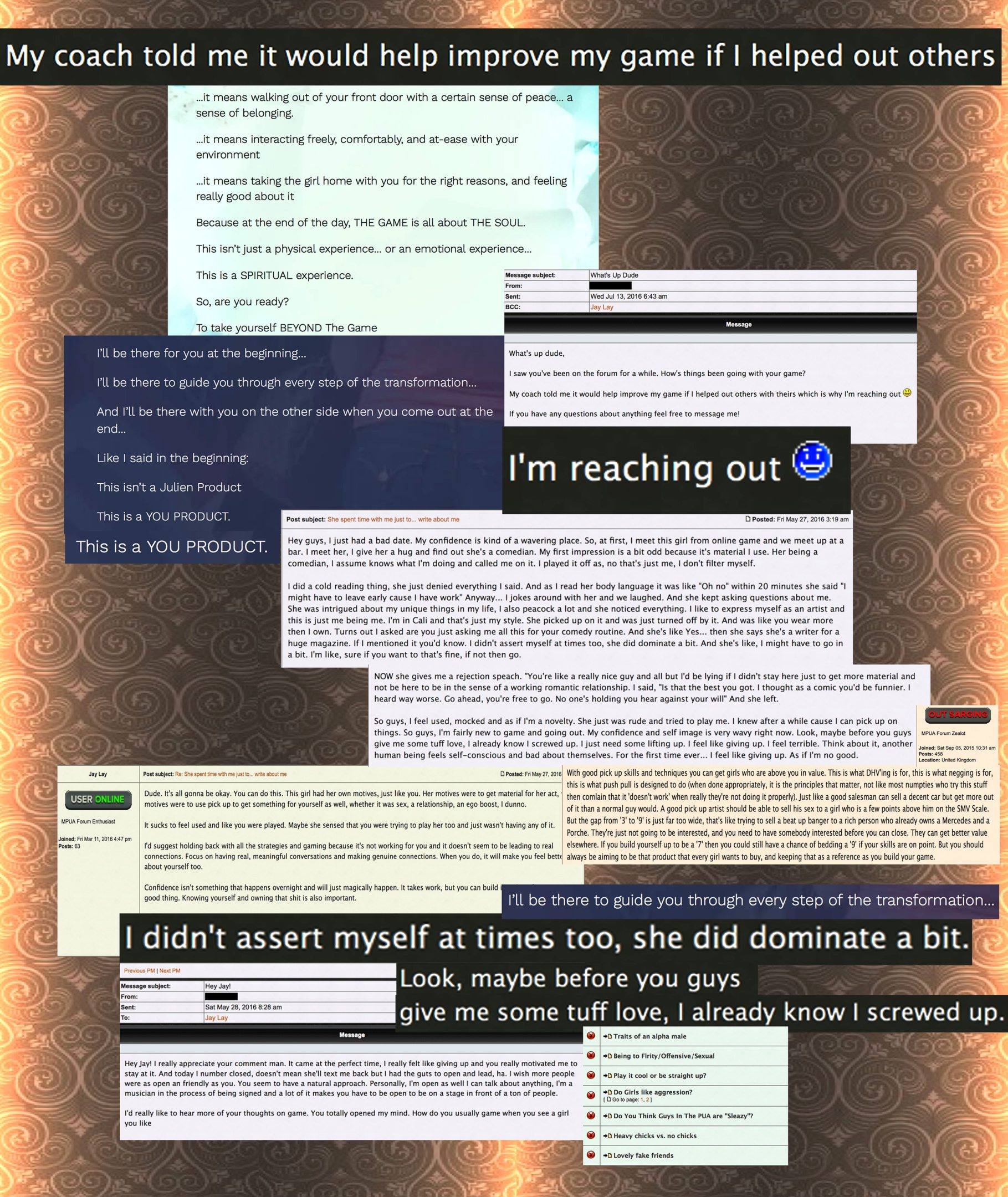 How did you become interested in pick-up artists?
A few years ago, I was in a relationship with a guy who revealed to me that he was a pick-up artist. I had heard the term, but I didn’t really know what it meant, so initially, I was just confused. The relationship was a weird one anyway—there was a lot of emotional turmoil, but I was kind of obsessed—and we eventually broke up. Last winter, I heard a radio interview with Neil Strauss and it all just came rushing back. I did a bit of research, and it was pretty clear that a lot of what happened in my relationship had been taken directly from the PUA playbook.

Like “negging,” where you hide an insult in a compliment?
Right. That’s the classic one. “Your nails look cute—are they real?” There is also a lot of stuff about being an alpha male, about touching the other person to establish dominance. They use the term “push and pull.” I remember one night, after a date with that ex, he was walking me home when, a block from my place, he said, “Okay, I’m going to leave you here.” It’s about building up a woman’s confidence and then crushing it to throw her off. 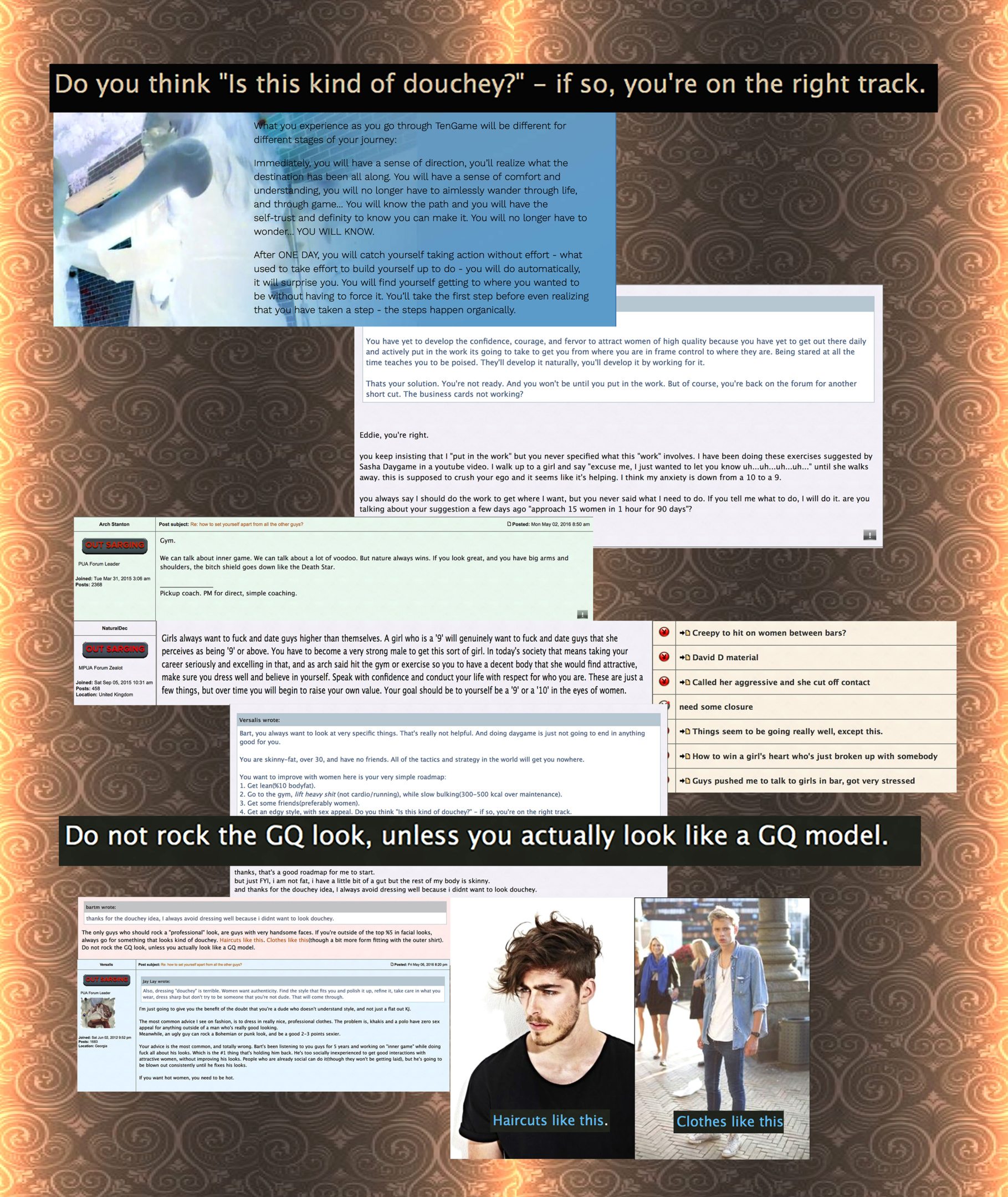 How did you go from artist Jennifer Laiwint to self-styled life coach and pick-up master Jay Lay?
It was just curiosity at first. I wanted to understand what had happened to me a few years ago. I googled “pick-up artists” and ended up on a PUA discussion forum. They talked about things like when to text back, but there were also more explicitly misogynistic threads—a lot of derogatory slang, vulgarity, objectification. One of the things that really surprised me was that, while there were definitely some gross men and shady conversations, there were also a lot of guys who didn’t know how to connect or have a lot of experience with the opposite sex. They were looking for support and advice on how to deal with rejection.

For example?
One guy was asking about how to respond to a woman on Tinder. She had posted a picture with her dog, and he wanted to know if he should respond with a play on the word “pussy.” I thought, nooooo, and I wanted to intervene. So I did. In order to comment, you have to register. I decided to pretend I was male because everyone on the site is. That’s how Jay Lay got started, and the character really developed over time.

How would you describe “him”?
Jay was a sensitive bro type who used to be in the PUA world. He went through some sort of transformation and now he takes a different approach with women, where he actually listens to them. He’s sensitive and caring. He calls himself a feminist, but I’m not sure that he knows what that means.

Do you think he’s realized that the non-play is the ultimate play?
Oh, that’s interesting—I never thought of it that way. I think he realized that by not using all of these PUA strategies, he was a lot more fulfilled. He was able to make real connections and get a girlfriend, which is what so many of these guys want.

Did you always see this as a potential art project?
No. It was just something to do. I was procrastinating on another project, and I enjoy giving advice, so it was fun, and I hoped I was having an impact. Some of the questions and comments I saw were shocking. One guy claimed that oral sex was invented in the ’70s. Another guy who had been rejected was asking if he should got to the woman’s workplace. Jay Lay said, “No—don’t do that!” It only became an art project because, every time I mentioned what I was doing to friends, it would spark a lot of really interesting conversations about masculinity and people’s personal experiences. 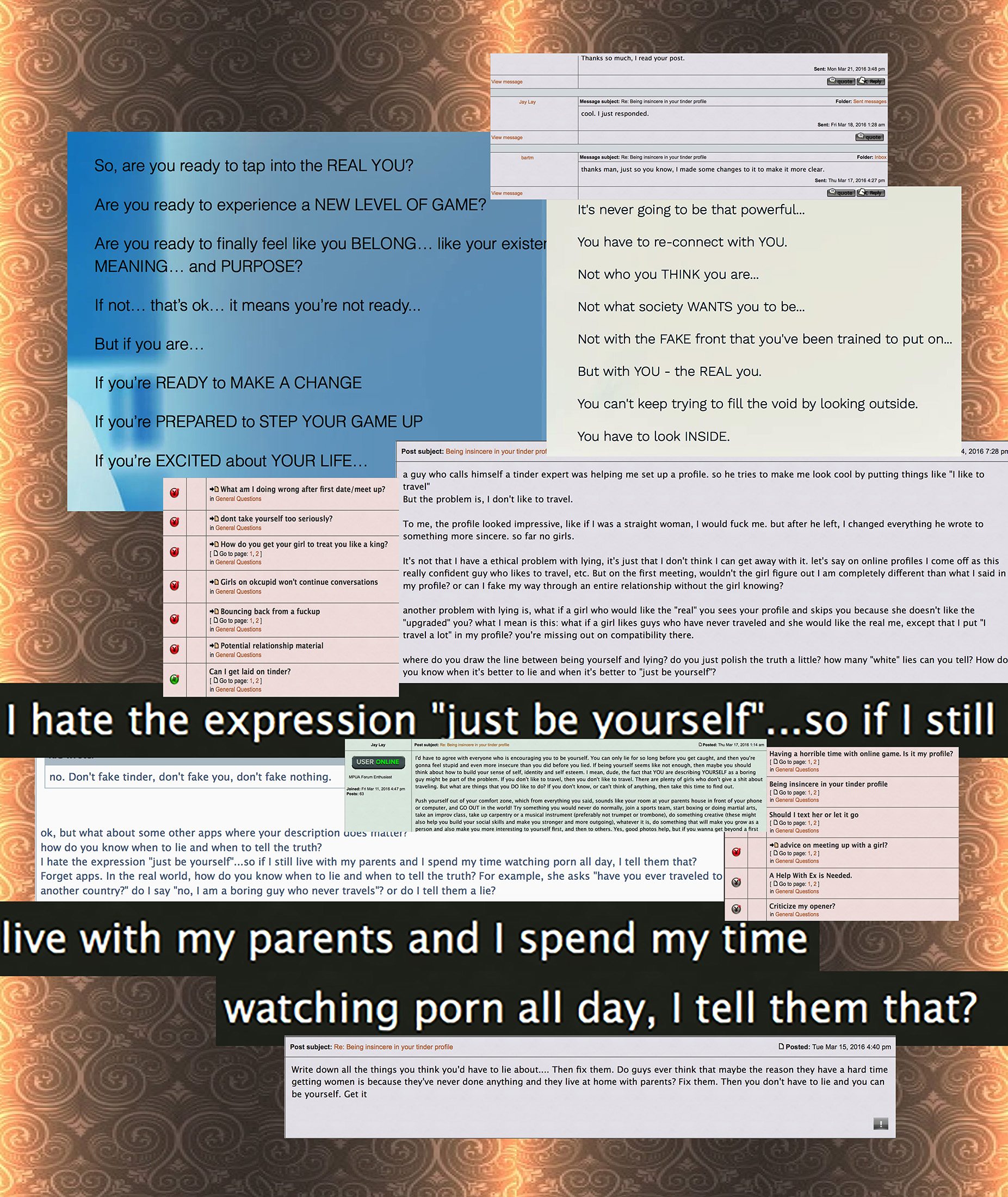 Was it challenging to take a conceptual experiment and turn it into visual art?
Yes. First of all, I had ethical questions about displaying conversations I had as Jay Lay, some of which got quite personal. I decided that conversations from public message boards were fair game, but not private, one-on-one discussions. Then there was the challenge of turning something conceptual into visual art. I played with the idea of having these conversations performed, sort of like a play. Ultimately, I felt like there was something interesting about the aesthetic of these PUA forums. The works are digital collages made up of a combination of text that comes from my conversations on the forum and from pick-up artist websites.

Is this work something you would envision someone buying to hang on their wall?
Ha! No, I don’t think so—unless I become some really famous artist. The work that I make these days isn’t really salable. I guess someone could buy it, but that’s not my focus.

Do you see your project as a comment on contemporary masculinity?
I’m not an expert on toxic masculinity, but the behaviour that I saw was a reaction to men perceiving a loss of power or a threat to power. It connects to the Men’s Rights Activism movement—you can see some reasons why these guys develop the way they do. A lot of the conversations in these forums are about taking women down a few notches.

You started this project long before #MeToo. Does its meaning change in light of everything that is going on?
It definitely feels potent. I don’t know if I would have approached this in the same way post-Trump, -Weinstein and -#MeToo. There was a jokiness to some of the conversations I had, but that has changed. Things that I might have seen as humorous or endearing don’t seem so funny anymore. There is active manipulation going on. It’s subtle. It’s not as explicit. We still don’t think of these techniques as part of the conversation about rape culture. But when you look at Weinstein and the power he had over the women he abused, I think maybe we should.