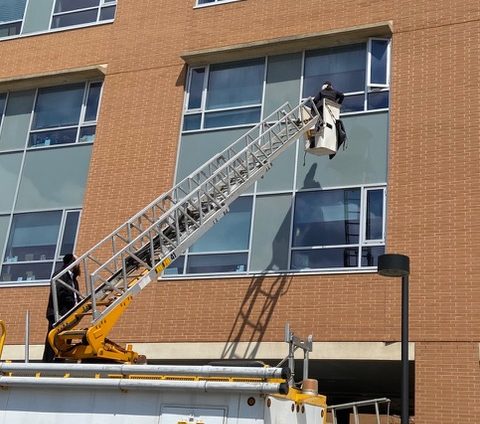 My grandfather, Max Rosenbloom, was born in a small Polish town called Stazow, and was sent to labour and concentration camps in Poland and Germany during World War 2. Just before the end of the war, at Buchenwald, a piece of machinery fell on him, breaking his back. He barely survived, and doctors said he’d likely never walk again—but he did, out of sheer determination. In 1948, he moved to Toronto, where his brother had emigrated before the war broke out. He settled in Kensington Market, determined to build a life out of the few dollars he had in his pocket. He always jokes that the morning after he arrived, he woke up and said, “Okay, now what am I going to do?”

An acquaintance arranged for him to get a job sewing on one of the manufacturers’ floors on Spadina, but things grew tense when he sewed faster than his manager. He quit and established a women’s clothing company called Original Sterling with his brother, which they ran successfully together for decades. In 1960, he met my grandmother, Sabina, on a trip to Israel. She was a child of the Warsaw Ghetto, and they bonded over their shared history. It was a whirlwind courtship. When they married, he brought her and her mother to Toronto, and they moved to a home in Downsview, where she still lives. Their daughter, Lee, is my mom. Now my grandparents have four grandchildren—I’m the second—and three great-grandchildren.

My grandfather has always been a pragmatist. For him, hard work and financial stability are necessary to take care of your family and your community. His mother and several of his sisters were killed in the Holocaust; I think he still vacillates between gratitude and wonder that he survived. Growing up, whenever we’d ask him how he was, no matter how good or bad or chaotic his life was, he’d always answer in the same unflappable way: “Things are fine.” We spent our early years gathering in Downsview every Friday afternoon for Shabbat—my grandmother’s roast beef is legendary. As my grandparents got older and started spend their winters in Florida, we’d travel down each year to visit them.

Eighteen months ago, my grandfather suffered a debilitating stroke. At first, my mom set up a makeshift home hospital so my grandparents could continue to live together. Then, in November, he suffered some further health complications and was moved into a hospital’s palliative care unit. The doctors told us he didn’t have much time left—he was 95, after all. Not long after, harnessing that same willpower he’s carried through the rest of his life, he began to recover, and the doctors moved him out of the palliative ward and into the long-term care section of the hospital.

He’s bed-bound now, but still very sharp. It’s been a miracle for us to have him with us, and my mother is determined to make sure he’s comfortable and not alone. She’s an only child, and incredibly devoted to her parents. Before the virus hit, she visited my grandfather every day, whether it was a 10-minute pop-in or an hour-long visit. In the before times, I would visit nearly every day too, stopping by on my lunch break or after work. My grandmother would also come down a few times a week, ordering a cab or getting a ride from my mom. She’d bring him a snack from home, they’d get a coffee down in the cafeteria or attend concerts at the facility, holding hands as the music played.

When news of the virus hit in January, we were concerned. We began to keep our distance during our visits and pump hand sanitizer every time we’d enter his room. By mid-March, the hospital stopped letting visitors in altogether. My mother was devastated. “Is this for real?” she asked. “I can’t visit my father?” That first weekend, she seemed lost. My grandfather was also distressed. “Why isn’t anybody coming?” he asked when we spoke to him on the phone. Technology is no replacement for being able to hug your great-grandchildren. Since then, virus has had a shocking and immediate effect on our family. My wife’s family lives in Brooklyn, and her parents and grandparents all got Covid-19. Her great-uncle, who was previously healthy, contracted the virus and died two weeks ago. I watched the funeral on Zoom, and I cried. Community is such an essential part of mourning, and we can’t do that now. I’m afraid I won’t get to see my grandfather again. I’m afraid for everyone who is elderly and alone right now.

A few weeks ago, I was speaking to my sister, who lives in Chicago. We wanted to do something for my mom and my grandfather, to ease their isolation. I don’t know where she came up with the idea, but she said, “What about a bucket truck? He’s on the third floor, and his room faces a parking lot. We can lift her up the side of the building.” And something clicked. I remembered that my friend Joseph, who runs A&Y Electrical, had a lift truck he used for work. I called him up and asked, “Hey, can I put my mom up the side of my grandfather’s nursing home?” He was eager to help. “How’s 2 o’clock tomorrow?” he said. “We won’t be using the truck, and the weather’s supposed to be beautiful.” We tried to pay him, but he wouldn’t accept.

Joseph met us in the parking lot with a massive smile on his face. He showed my mom how to climb up the truck’s back ladder and across the boom to make it into the bucket, and he made sure she was strapped in and buckled up. The truck shakes a bit—that was the most nerve-wracking part. She was gripping the sides of the bucket really tight. My grandfather’s personal support worker had opened his window a crack, and moved his bed as close to it as possible. When he saw my mom appear in his window, she was shrieking with joy. “Dad, I love you! I can see you!” He was shocked. “Are you crazy? What are you doing?” She said, “I would move mountains to see you.” He told her he loved her, and they spent a few minutes smiling at each other. My mom cried as Joseph lowered her back down. It was emotional for all of us, and so meaningful for her to get to see my grandfather’s face and hear his voice.

Every day for my grandfather is a challenge. He’s not as physically strong as he once was, and he’s emotionally drained as well. Now, he asks if our grandmother is okay. Is she healthy? Is she taken care of? She is, but it troubles him that he’s not there to do it. They’ve been married for more than 60 years, so it’s difficult for them to be separated. They speak on the phone three times a day, and he asks when she can come to visit. It’s hard for him to understand that she can’t right now. But my grandmother was incredibly happy and relieved that my mom was able to see him. We were able to get him an iPad so we can FaceTime with him, but he doesn’t always have the energy. Right now, we’re waiting like everyone else to see if visits might reopen in the coming weeks, at least to immediate family

In the midst of the pandemic, we’re seeing so much kindness from people like Joseph and my grandfather’s PSW. People are saying, “I can give a little of myself to make these extraordinary things happen.” I hope that continuing kindness proves to be silver lining of all of this health and economic trouble. Humanity is beautiful.